*This restaurant is now closed*

I went to London a couple of weeks ago on a flying visit and managed to find the time to stop off for lunch at one of the many restaurants on my long to do list. Not living in London anymore, I find myself constantly suffering from restaurant envy. Whether it be a new fancy restaurant, noodle bar or bargain basement dive in the middle of Camberwell, my list of places to visit is grows far more quickly than could ever possible be ticked off.

As I was around for a weekday lunch it was a great opportunity to make the most of some of the amazing value Michelin starred set meals available in the Smoke. The meal we ended up with was even better value than a Greggs sausage roll and egg mayo sandwich lunch. I’ve wanted to visit Shane Osborne’s Pied a terre for yonks but as we only tried to book a couple of days in advance it was fully booked. We therefore plumped for its sister restaurant L’autre pied which has a bargainous £22.50 3 course set lunch.

The set menu offers a choice of 2 starters, 2 mains and 1 dessert or cheese (at a £4 supplement). As one of each of the starters and mains were vegetarian we both opted for the same dishes (there was no way I was sacrificing meat even if it meant having more dishes to talk about in my review).

Now it’s taken me a bit longer to write up this post than I initially intended (I blame the lesson planning) so I can barely remember most of the food I ate. However, with the aid of my photographs as visual aids, I’ll give it a punt.

Pre-starter: Cod fishcake and garlic mayonnaise.  Basically a giant cod croquette. Fresh tasting, packed full of fish and not in the slightest bit greasy. Mine was an absolute winner. However, my brother’s fish lollypop represented the only genuine howler I have encountered in a Michelin starred restaurant. They’d somehow managed to leave a piece of cellophane in the croquette from when it had been rolled. My brother notified the waiting staff, the offending fish finger was whisked away and humble apologies were made.

Starter: Salad of Breaded Chicken Oysters, Duck Gizzards, Parmesan Cheese, Garlic Mayonnaise – An equal protein to salad ratio. What more can you want from a salad? I’ve never eaten gizzards on their own before but they had a good meatiness to them. Trivia - Gizzards are apparently a type of specialised stomach.
Main: Pigeon, fondant potato, turnip – I must admit I’m struggling to remember the details but this was fairly immense. Everything cooked to perfection and all the flavours (which I can’t remember) worked together perfectly. My only qualm was there were a couple of bits of sinew left on the pieces of pigeon.

Dessert: Burnt cream with shortbread – Packed full of nutmeg which I’ve never experienced before in a crème brulee. It reminded me of an egg custard tart in terms of flavour. Really, really tasty. 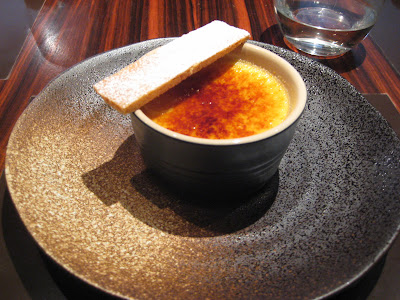 Cheese: We decided to share the cheese and a dessert so we could have a bit of both. I can’t remember any of the cheeses other than stinking bishop. Howver, I can assure you they were all delicious. The oatcakes and homemade pringle like things were also very good. 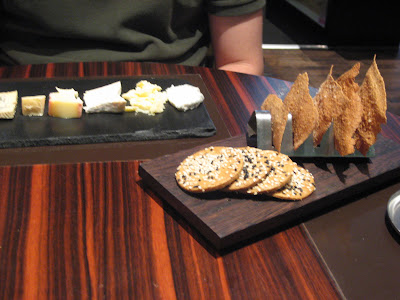 The bill came to a grand total of £59 excluding service. We drank tap water with the meal so I’m sure the profit margin on our lunch was on the slim side. I can’t emphasise how good this meal was. Most certainly one of the best Michelin meals I’ve had. If it wasn’t for the cellophane or couple of bits of sinew then this meal would have been nigh on perfection. 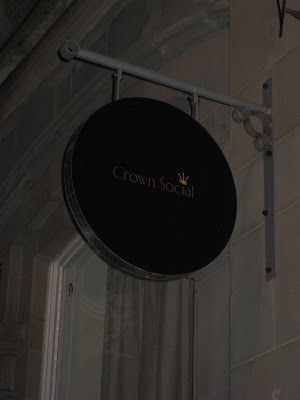 I must admit I was pretty excited about our trip to the Crown Social. We’ve previously visited The Crown at Whitebrook and The Crown at the Celtic Manor and were very impressed by both. With Cardiff lacking any form of high end dining, especially since the recent departure of Le Gallois, I had high hopes for the latest addition to The Crown stable. However, would it be The King’s Speech or The Emperor’s New Clothes.

I’d had some slightly amusing email communication with one of the Front of House managers, Alex, after I’d posted the wrong menu on my blog and we were greeted warmly by him and the team on arrival.  The bar and restaurant has a pretty sophisticated yet laid back urban vibe going which is a refreshing change from some of the stuffy and dated Michelin style gaffs we’ve been to previously. 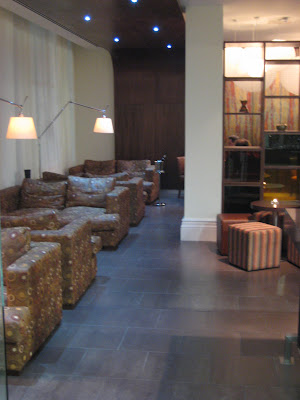 We plonked ourselves at the bar, quaffed some cocktails and perused the menu. Having already digested the menu in detail at home, I was pleasantly surprised by the reasonable pricing, even though I had been reassured over email it wouldn’t be a rip off small plate joint. Nibbles average around £1.50, starters £5, mains £10 and puddings £5. Even with the suggested 3 starters, 3 mains and 3 puds per couple it still works out as £30 for 3 courses per head which you can easily spend in a number of city centre restaurants.

But would the food reach for the Michelin star heights I was hoping? In short, not yet. Service was wonderful and food was beautifully presented. However, there were some very high and very low points flavour-wise. Now I know it was only the first week of opening of the restaurant so they’re still honing the menu, but as far as I’m concerned if they’re prepared to charge full prices in their first week then they should be judged as a fully functioning restaurant.

So onto the food:

Nibbles at the bar –
1) Crisp, pulled, lamb breast – A sort of lamb scratching style affair. Nicely seasoned with salt and lemon zest but ultimately just a bit greasy. I’d rather have a bag of Mr Porky’s
2) Sticky beef rib middles – Beautifully melt in the mouth pieces of beef in a lovely barbeque style sauce. My only criticism was the slightly odd tepid temperature. Was this deliberate? Should they have been cold or hot? 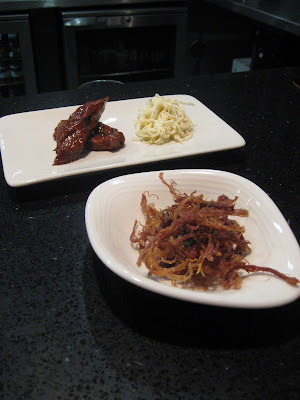 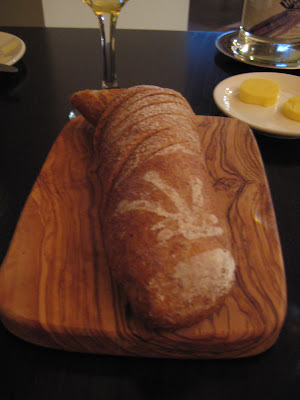 2)      Swiss Pasta, welsh streaky, morel cream – Unbelievably tasty. The real high point of the evening. I’m sure Switzerland isn’t famous for its pasta but on this basis they can definitely give the Italians a run for their money. We were informed that one of the sous chefs has previously worked in Switzerland where he picked up this recipe. The flavor combination was stunning – crisp bacon, tons of morels and a creamy morel sauce and some pasta. Lush. 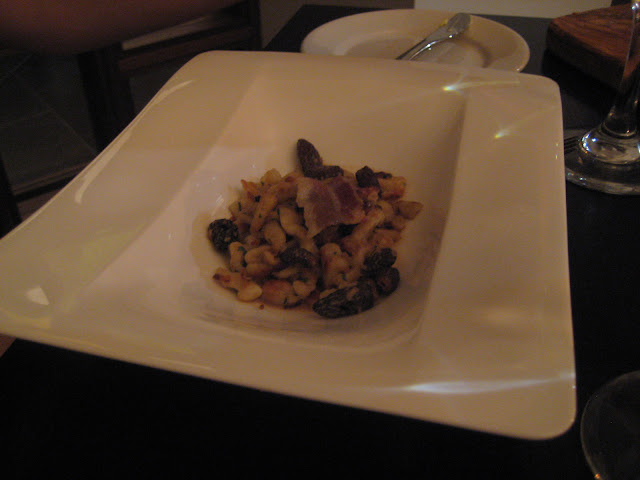 3)      Cheese fondue, onion madelaines – Keeping the Alpine theme going I couldn’t resist this kitsch temptation. Beautifully light and fluffy madelaines and a really good fondue. We were given enough cheese for an 80s dinner party but I was able to mop up the vast quantity with the remaining bread. 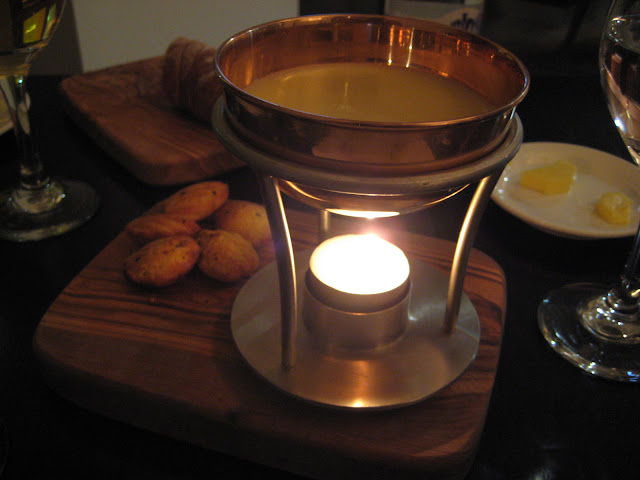 4)      Leek & Potato terrine, roast garlic, toasted hazelnuts – Worked beautifully as a whole (which is I’m sure as it was intended) but without the hazelnuts or garlic in a mouthful I felt the dish was a little bland. I know chefs normally intend for you to have a mouthful of everything in one go but sometimes I get a bit lazy and just pick up one thing… 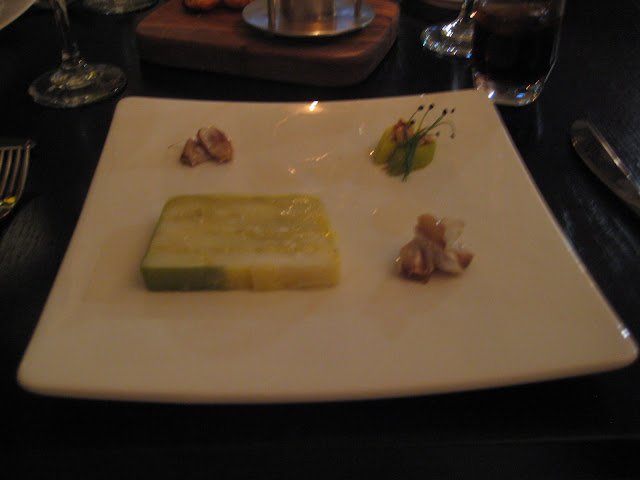 1)  Crab tortellini, crab cream sauce – Crabtastic. The tortellini was filled with stacks of crabmeat and the sauce was full of brown crabmeat flavor. However, it was slightly let down by the pasta which was a touch on the dry side. 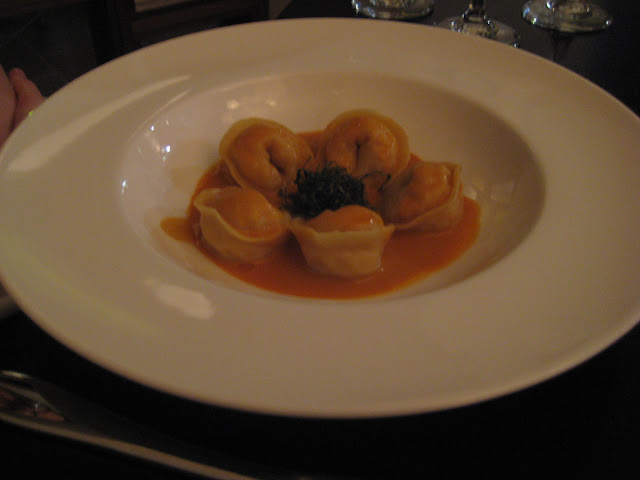 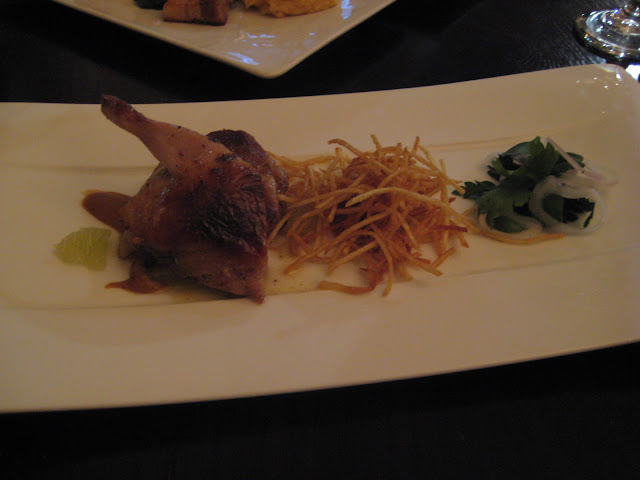 3) Welsh pork belly, apples, Gwynty Ddraig cider – Just as it looks in the picture with the addition of a creamy (cider/porky?) sauce. However, the mash was definitely on the grainy side.

Dripping cooked chips – Some of the best chips I have ever eaten. Fluffy, crunchy and meaty. If only they did these at the Penylan fish bar. 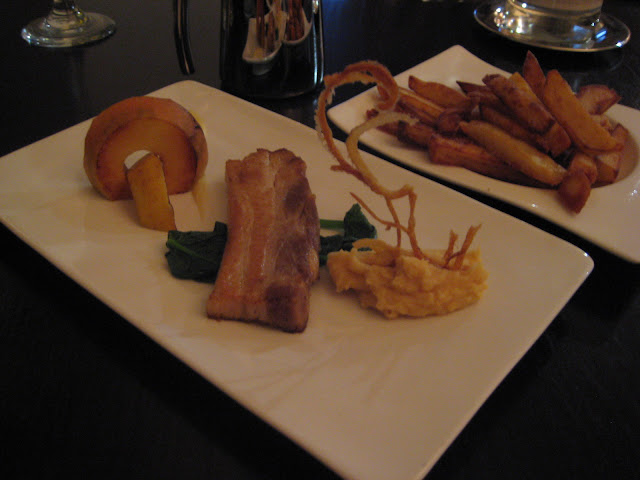 This was where the meal took a bit of a walk of a cliff. We ordered the selection of 5 deserts to share and except for the delightfully tangy green apple sorbet everything was mediocre. A vanilla milkshake was unremarkable, a bitter chocolate tart had a slightly soft base, a new york style apple cheesecake was not a patch on the real deal and chocolate and laver bread fondant verged on the bizarre. Overall a real disappointment. 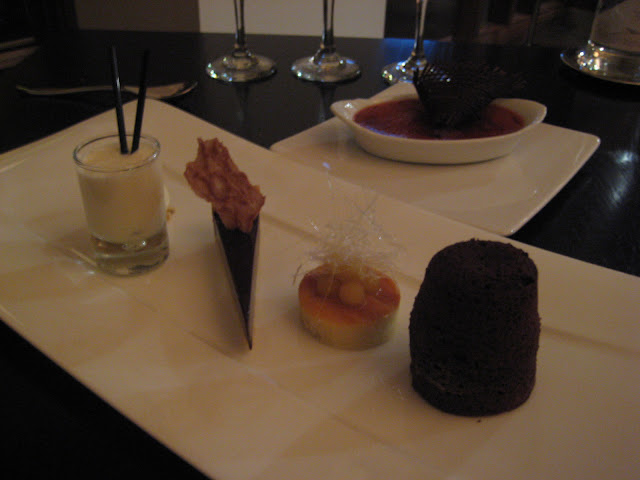 This was followed by an awful cup of instant decaff coffee and some pretty dry and flavourless macaroons. What with the current macaroon trend I was expecting some joyful mouthfuls of crunch, chew and interestingly flavoured cream. However all I got was a bit of crunch and bland cream. They’d also been un-necessarily hyped by their presentation at the table by the waitress in a fancy wooden box. 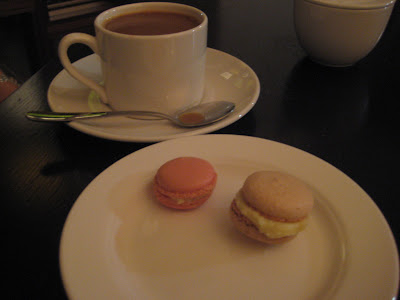 To be fair to the waiting service, they were very apologetic about our cup of instant and deducted the offending beverages from the bill. Hopefully they’ll be more considerate to people who need to get to sleep before 4am in future by offering something more than a Nescaff equivalent.

So all in all, a really enjoyable meal with some great service and a few let downs with the food at the end. I’ve got high hopes that the flaws in the dishes will be ironed out as it has potential to be Cardiff’s top restaurant by a clear margin. I still fully intend to head back for the Crown burger along with some more dripping chips for a weekend lunch in the near future.

Update - The Crown Social has now closed and has been replaced by The Social.
Posted by gourmetgorro at 22:06 1 comment: