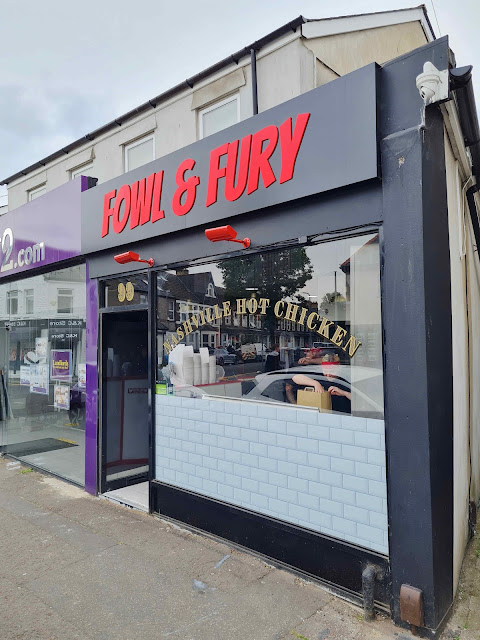 The fundamental question you must ask yourself when you visit Fowl and Fury in Cathays is not what you should order but rather how spicy you should order it.
Speaking from first hand experience, it’s the crucial factor in determining whether you enjoy a tolerable level of chilli heat or have to endure a weird and painful chilli endorphin high. 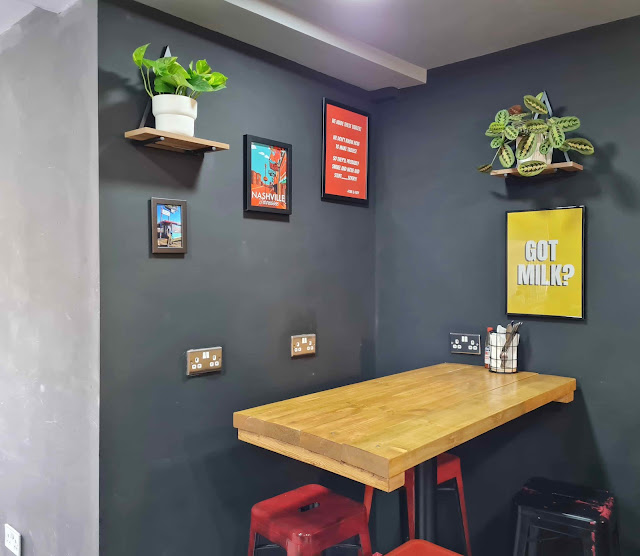 With a menu focusing on various iterations of Nashville hot chicken and hot cauliflower, they're all available in six different spice levels.
Country, the mildest, is chilli free and akin to Southern fried chicken whilst Fury, the hottest, is accompanied by both a health warning and a glass of milk.
I’m firmly in the mild camp and I wouldn’t recommend starting any hotter than this. It’s important to remember that even mild Nashville hot chicken is still pretty hot. 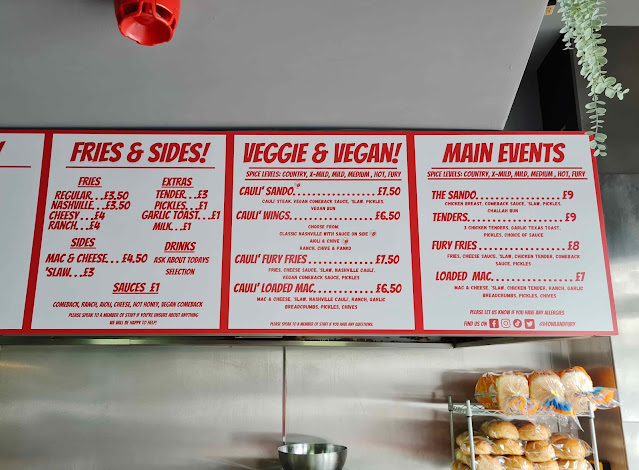 Owned by husband and wife team Jamie and Natalia Rees, the duo built up a loyal following at their previous pop-up location in Sticky Fingers street food market. So, the move to a permanent unit close-by seems like the logical next step.
With just four tables and no reservations, you’ll have to cross your fingers that there’s a seat free when you visit. When we rocked up on a Wednesday lunchtime around 1pm, we were fortunate to bag the last table and Jamie informed us this was the quietest they'd been since a very busy opening. Still, you can always order takeaway. 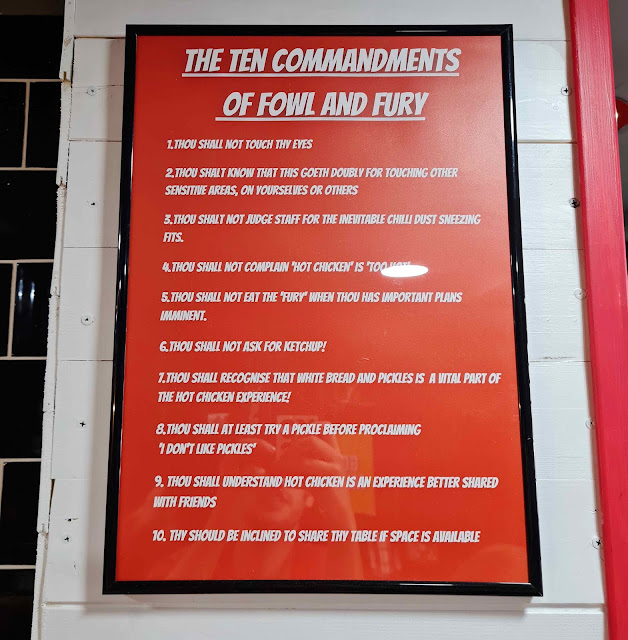 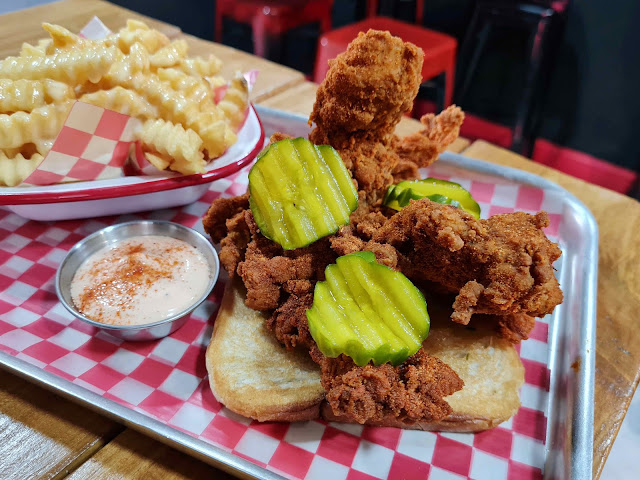 If you’re more of a chicken burger kind of person then their sando (£9) is excellent too. A squishy yet sturdy challah roll is stuffed with a whopper of Nashville hot chicken breast, light and crunchy cabbage slaw, tangy comeback sauce and dill pickles. 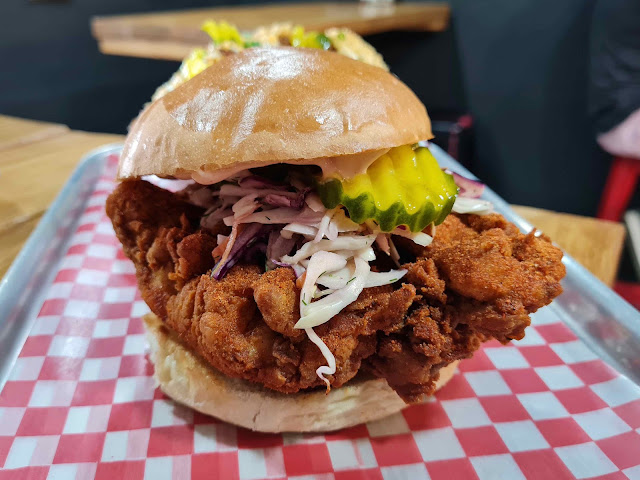 We wanted to give their Nashville cauliflower a run for its money too and so ordered a portion of their cauli’ loaded mac (£6.50).
On the evidence of this dish, it’s safe to say their veggie options are no mere afterthought - the tender cauliflower pieces and rugged spiced crumb coating work exceptionally well together. They’re heaped onto a thick and peppery mac and cheese, slaw, herby ranch dressing, toasted garlic breadcrumbs and chopped pickles. 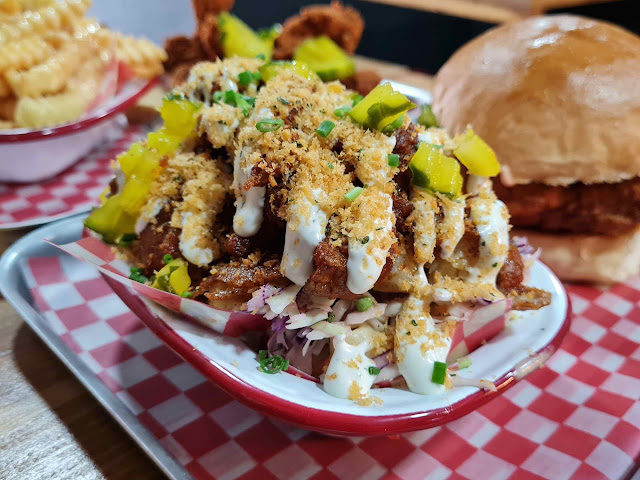 Finally, a portion of crinkle cut fries (£4) were coated in a thick and rich buttery cheese sauce. Whilst very tasty, they weren’t as assertively crisp as on previous occasions, meaning they eventually became a bit soggy. 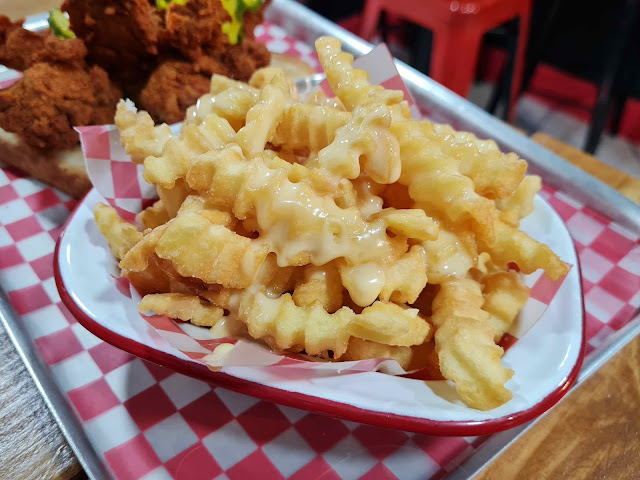 I’m a big fan of Fowl and Fury and there’s no doubt that they serve some of the best fried chicken in Cardiff. It’s great to see this excellent Cardiff independent taking the next step from pop-up to permanent.
The details:
Address - 99 Wyeverne Rd, Cardiff CF24 3BZ
Web - https://www.instagram.com/fowlandfury/
Telephone - 07921 395438
Posted by gourmetgorro at 19:31 No comments: 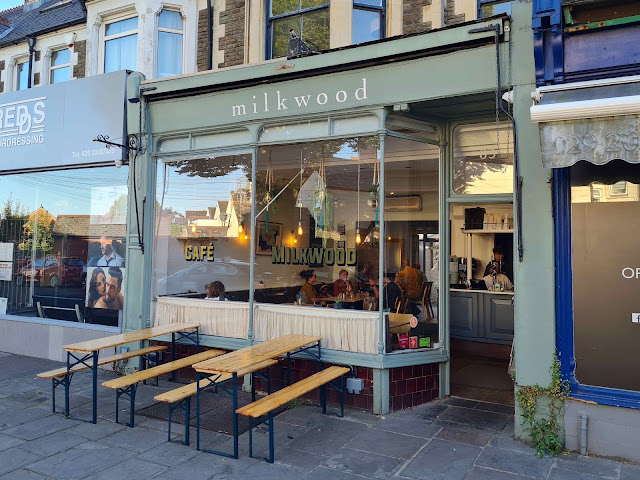 All of them are masters of reinvention.

Having already successfully transformed from one of Cardiff’s best high end restaurants into a cafe serving epic brunches, Milkwood has once again started opening again on Friday and Saturday nights when they serve a menu of refined small plates. 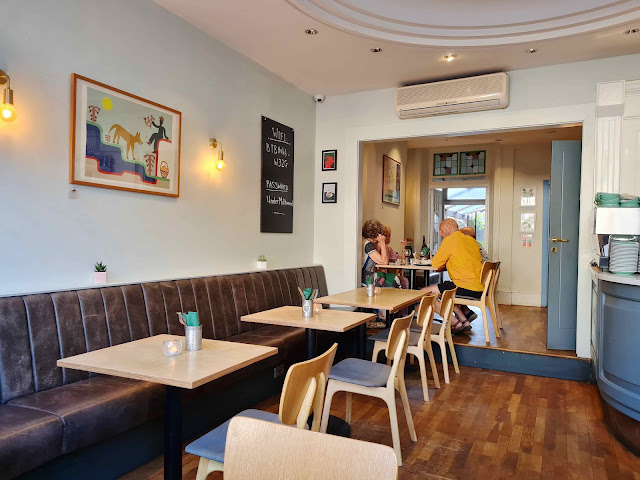 It provides an opportunity for head chef Cornel Uys to flex his creative muscles with a menu of Asian influenced modern British cooking.

Originally hailing from South Africa, Cornel joined the Milkwood team in 2021 and previously headed up the kitchens at 3 AA Rosette country hotels like Ardanaiseig Hotel in Scotland and Castell Malgwyn in Pembrokeshire. 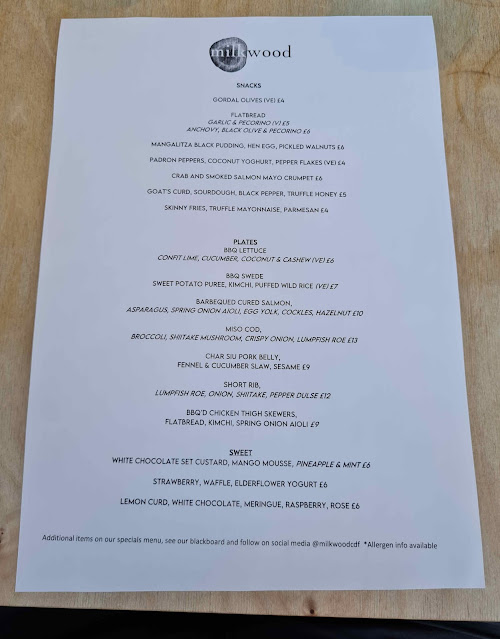 His menu reads very well. In fact, I'd have gladly ordered everything on it.

A pair of good margaritas (£9) were big on booze, citrus and sweetness. They were just the ticket on a scorching summer’s night. 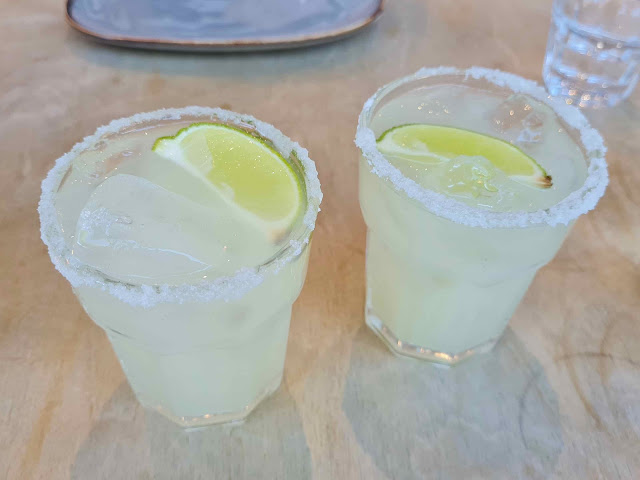 Out of our two snacks, crisped cubes of earthy Mangalitza black pudding (£6) were the star of the show. Their accompaniments of a golden runny egg yolk, the vital sweet acidity of pickled walnut puree, and an onion puree with a lovely caramelised complexity, were all bob on. 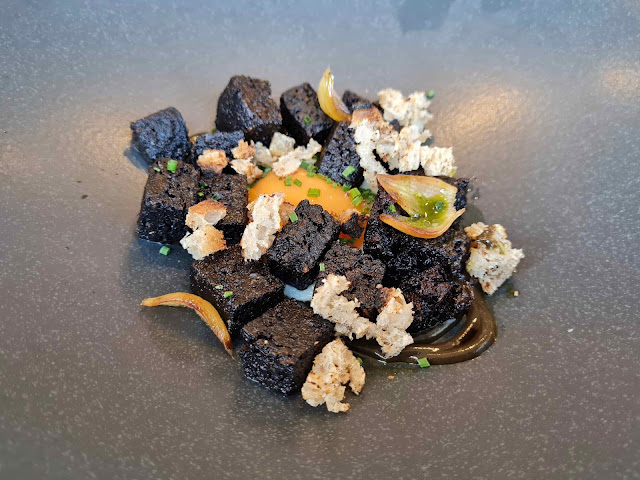 A crumpet (£6) was generously topped with excellent smoked salmon and white crab meat mayonnaise but it was let down by the slightly stodgy carb component. 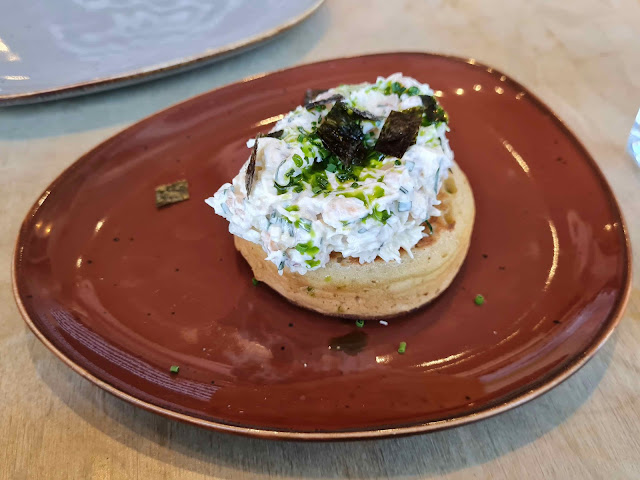 Our solitary vegetable dish of the meal was nicely charred little gem (£6) that was layered with bags of flavour - a creamy coconut dressing, delicately acidic confit lime with no mouth puckering qualities, and lightly pickled cucumber. 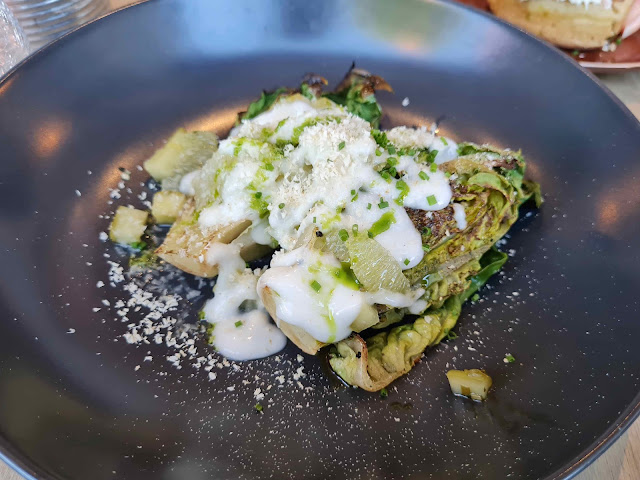 A precisely cooked fillet of flaky miso cod (£13) demonstrated why it’s such a good flavour combination. The deeply savoury and slightly sweet piece of fish was elevated by a silky and buttery brocoli puree, earthy shiitake mushrooms, a savoury dashi and salty pearls of lumpfish roe. 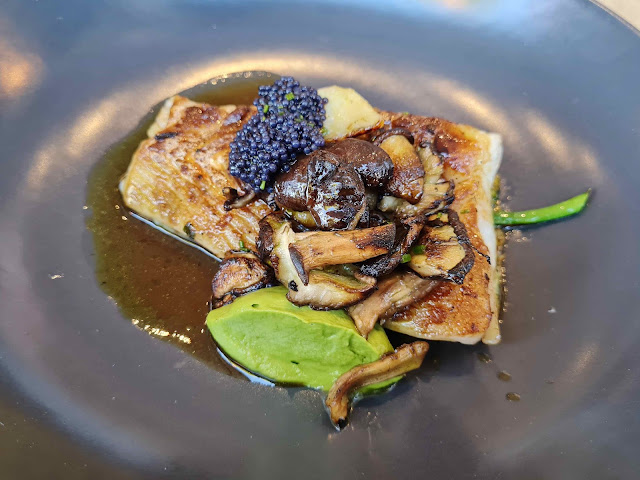 A few elements began to repeat themselves in different dishes as the meal progressed but it’s hard to grumble really when they were all so tasty. This time, a long-cooked piece of beef short rib (£12) and a deep flavoured beef dashi were joined by more of that excellent onion puree, shiitake mushrooms, lumpfish roe and crispy onion rings. 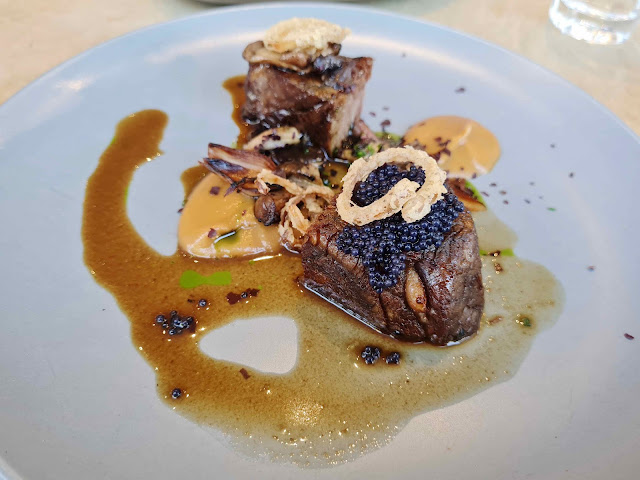 A sticky caramelised chicken thigh skewer (£9) teased apart into pieces easily and was lovely stuffed into a soft flatbread with a light, crisp, and gingery kimchi and a spring onion mayonnaise with the lightest whiff of alium. 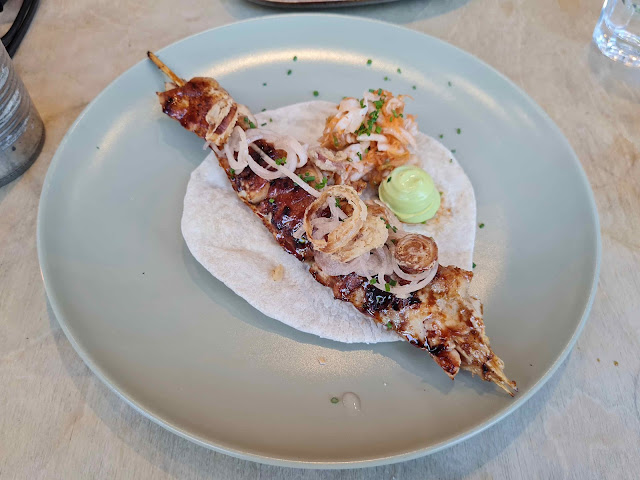 Having regretted not ordering the char sui pork belly (£9) straight out the gate, I ordered a portion as a pre-dessert and I was very glad I did. It was the star of the meal.

The gloriously tender char-licked slices of sweet and savoury barbecue pork were exceptionally well-rendered of fat, making the wobbly stuff equally as enjoyable as the meat itself. More of that caramelised onion puree and a fresh cucumber and fennel slaw with a good thrum of chilli were very good garnishes. 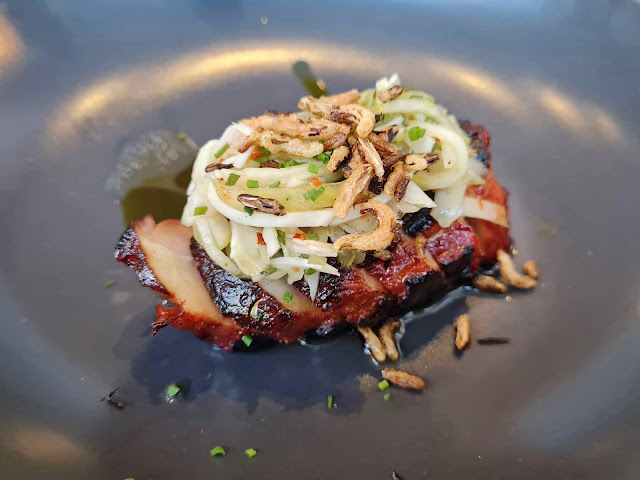 Dessert was almost an unmitigated success - an aerated mango mousse (£6) with bags of flavour and a sweet yet refreshing pineapple and mint compote were both great but a warm white chocolate custard was a little overset and eggy rather than silky and chocolatey. 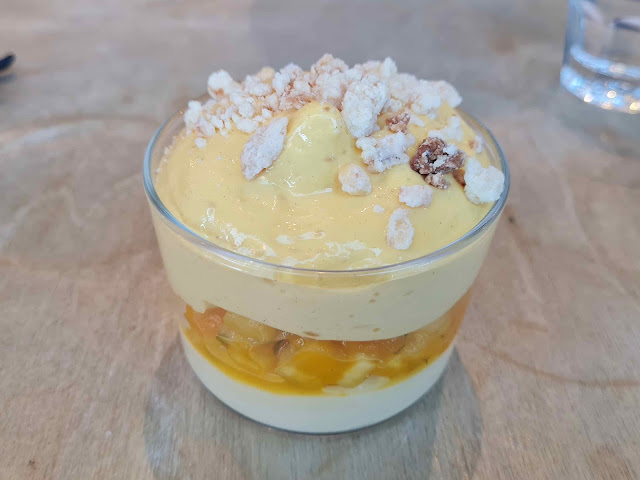 With their delicious, well-priced and ambitious small plates and lovely service, we had a really good meal at Milkwood. Of course, it was inevitable their latest reinvention would be another success. 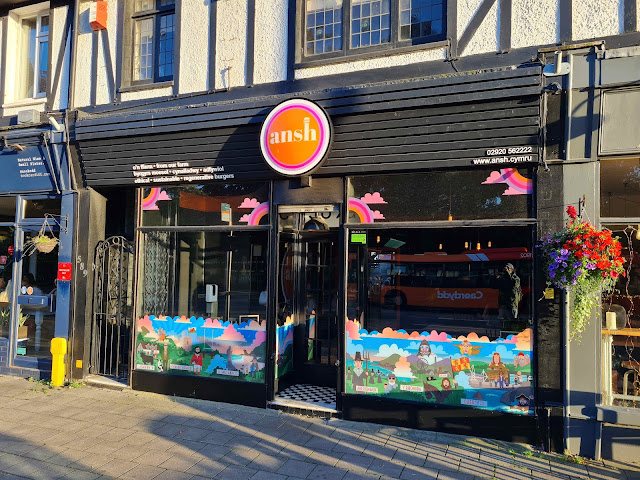 Last night I was craving an epic burger.

However, nowadays, I’m far too long in the tooth to take a punt on the latest chain. Especially when Victoria Park’s brilliant Ansh is the other option. 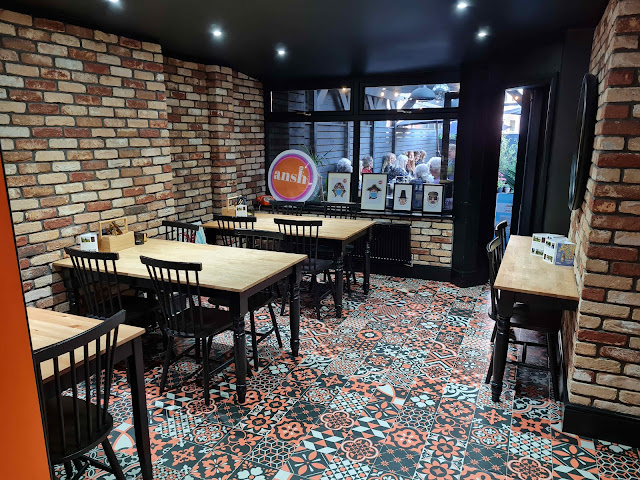 A collaboration between Shaun Jones of the excellent Oriel Jones butchers and Aled Hill, a self-confessed burger geek, Ansh feels like a love letter to Wales. Welsh beef and lamb sits front and centre on the bilingual menu which is made up of burgers named after Welsh cultural icons, including Jemima Niclas and Barti Ddu.

Alongside the Welsh meat, Ansh’s beers are supplied by Cardiff’s Crafty Devil, wines by Ceredigion’s Llaethliw Vineyard and desserts come from Let Them See Cake, who are located just next door. We’ve only ever visited Ansh for a takeaway and since opening for sit-in they’ve done a lovely job of transforming the venue into a bright and modern space where you could easily spend an evening.

As a business who prides themselves on their sustainability credentials, it was a little bit surprising to see Ansh’s burgers served in disposable cardboard packaging rather than on reusable crockery. However, perhaps there are logistical reasons which mean reusables aren’t feasible.

Both the burgers we ordered were absolute bobby-dazzlers with gorgeously soft and squidgy steamed potato buns, double smashed patties with crisp crusts and juicy interiors, and a good ooze of tangy Welsh cheddar. They’re burgers made by people who clearly love burgers. 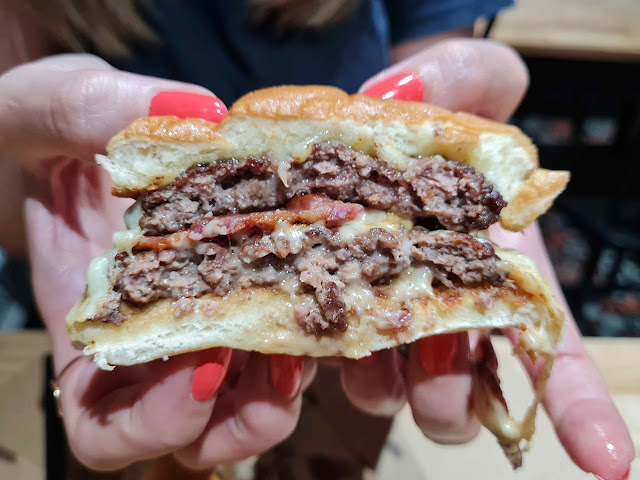 A Betty Campbell (£14) combined a pair of big-flavoured mutton patties topped with a deep spiced Caribbean mutton curry with thick gravy and huge pieces of fall apart tender meat and a drizzle of sweet and fiery Carolina Reaper and pineapple jam. 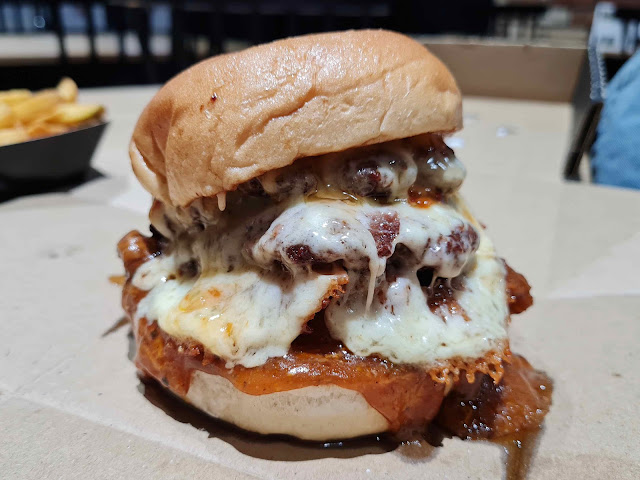 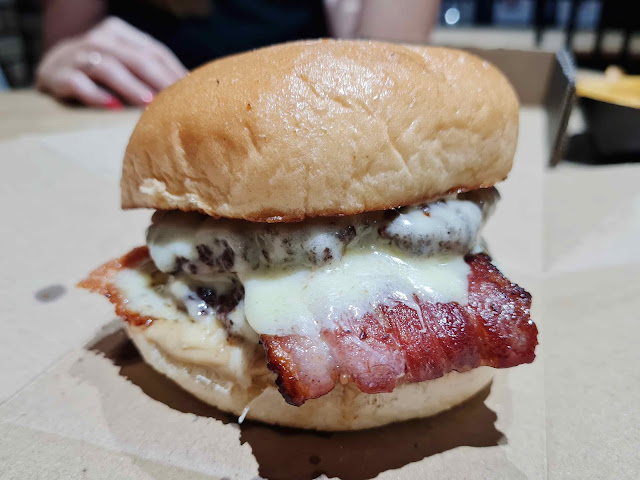 Whilst Ansh serve a selection of loaded fries, we ordered their bog-standard version (£3) and they were excellent, achieving a double-cooked level of extreme crispness whilst still maintaining their fluffy interiors. We had an absolutely killer meal at Ansh and their burgers are as good as any I’ve eaten in Wales, let alone Cardiff. If you haven’t tried them out yet then I’d recommend a visit as soon as possible.