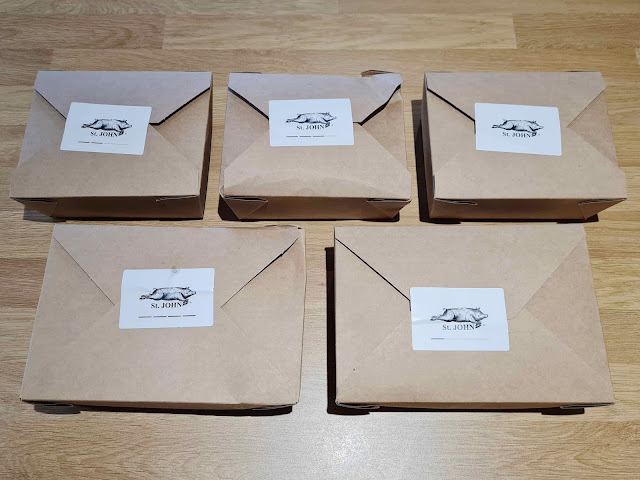 Flavour comes first.
Whilst I'm all for pretty looking plates of food, presentation is ultimately secondary.
Many of the best plates of food are simple in their appearance and St John's huge flavoured British cooking backs up this viewpoint. Their deceptively simple looking food is some of the best around and puts many overwrought multi-component dishes to shame.

When St John launched their nationwide delivery meal boxes via Dishpatch at the end of January they sold out of a month’s allocation in minutes. When they’re in stock again be prepared for a case of “fastest fingers first”.

Offering a three course meal for 2 for £75 delivered on a Friday, everything is vac packed and boxed to within an inch of its life and accompanied by slickly printed instructions.

To start was St John's most iconic dish, their bone marrow on toast. It's arguably the embodiment of their nose to tail ethos. 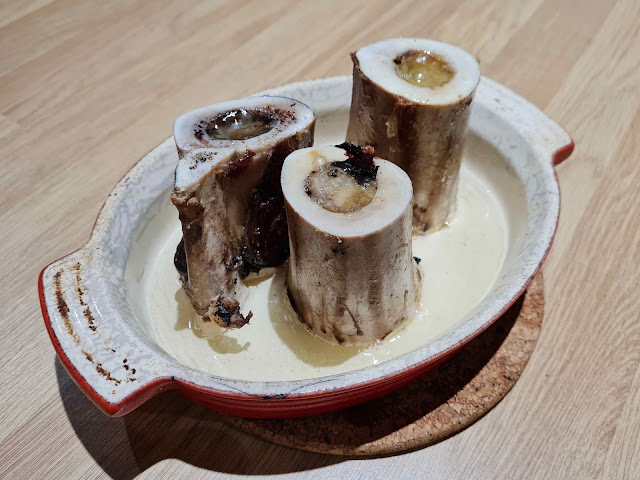 A trio of bones were laden with soft, beefy and fatty marrow. Slathered over crisp toasted sourdough they were balanced by a vibrant parsley salad with the punch of caper and sharpness of lemon. 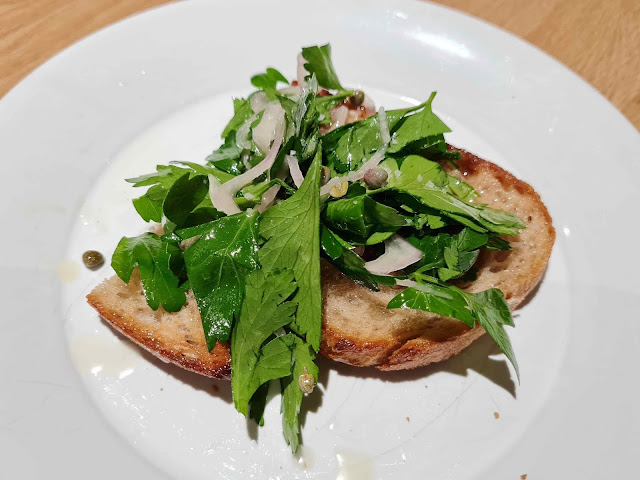 Main course, was hearty with a capital H; it was just the ticket on one of the coldest nights of the year. 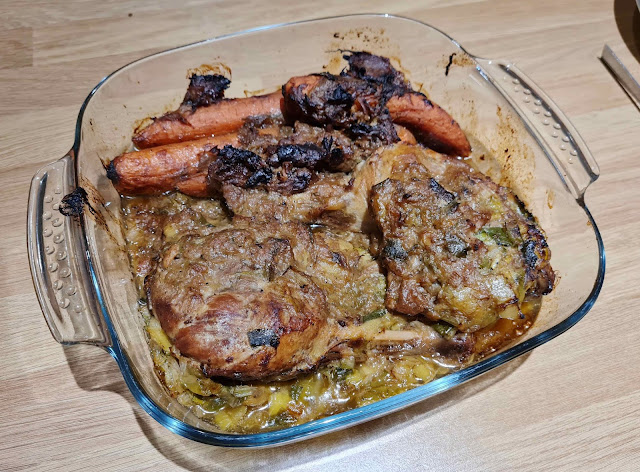 Fall apart tender braised duck leg was topped with soft leeks and accompanied by the meatiest of roast carrots bathed in sweet caramelised onions (and I think perhaps some trotter gear). Citrusy honking aioli provided punch whilst my own roast hispi cabbage added some lightness. A minor quibble, but we did find a few bits of grit in the leeks. 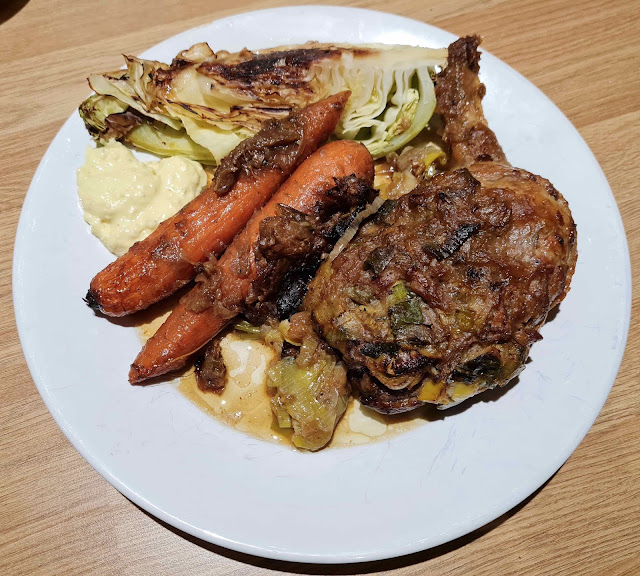 I have to admit that I raised both eyebrows when I saw our meal contained a solitary eccles cake. But, after that whopping main course, it was a more than ample serving.

The flaky, buttery pastry coated confection was loaded with a soft, sweet, spiced sticky sultana mix. It was counterpointed nicely by a huge tranche of crumbly, salty, creamy and slightly funky Lancashire cheese. 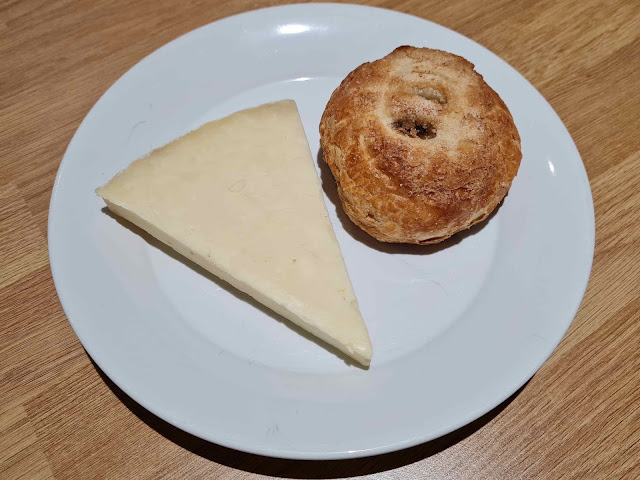 We had an epic feast. The food from St John isn’t the prettiest that I've served up at home from a meal box. But, it's certainly some of the tastiest.
The Details:
Web - https://dishpatch.co.uk/feasts/st-john-at-home
Address - St John, 26 St John St, Barbican, London EC1M 4AY
Posted by gourmetgorro at 08:26 No comments: 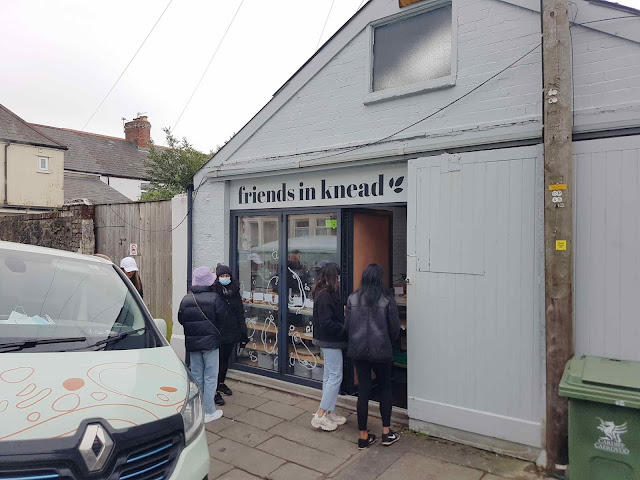 It’s fair to say that over the last twelve months I’ve eaten a lot of baked goods.

From pies and pasties, to cakes, croissants, tarts and quiches, I’ve inhaled it all.

One pastry purveyor who has supplied me with more carbs any other is Friends in Knead in Roath. 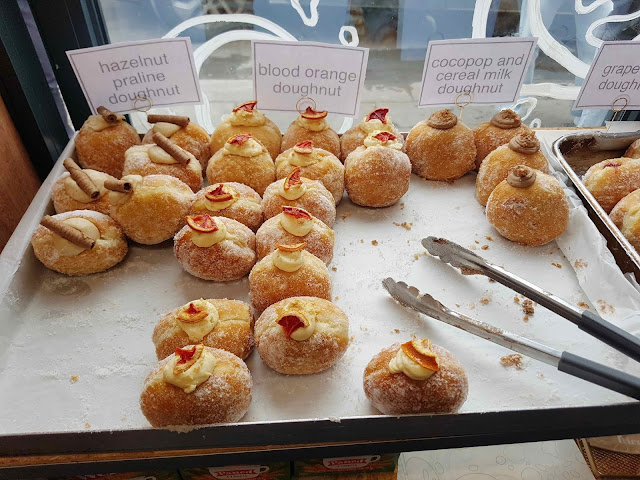 Owned, by Ceri Johnston Bower, the brains behind the brilliant Early Bird, it’s a working bakery and shop which is open seven days a week from 8am to 3pm. They also do handy local household deliveries via their website and have second branch in Barry Goodsheds.

On weekends you’ll often find a queue outside as it’s one household at a time. But, it’s always worth the wait. 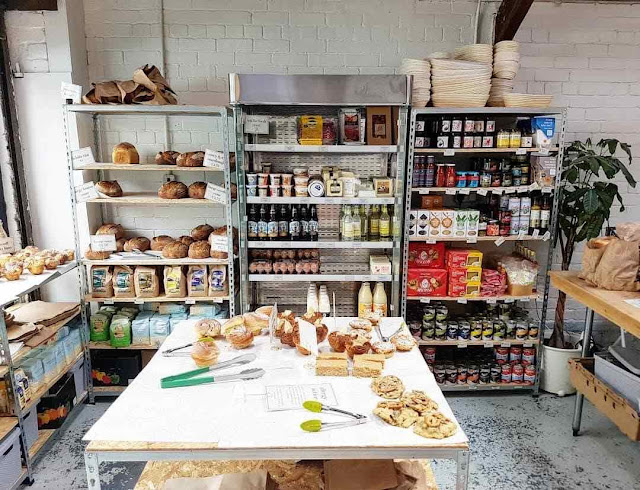 Their doughnuts are as good as it gets. Supremely light, soft and squidgy, the line-up of fillings change on a monthly basis. Flavours we’ve enjoyed include coco pop cereal milk (an uncanny likeness to its namesake), chocolate orange ganache, banoffee custard, cinnamon custard and pistachio custard. 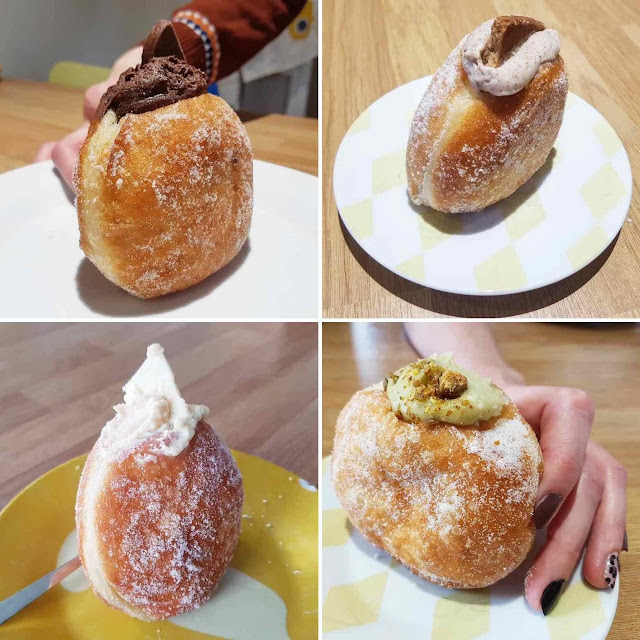 Dirty bins are always a crisp yet soft laminated treat. The golden flaky rolled croissant dough is stuffed with either biscoff or chocolate hazelnut.

Queen buns are regal in appearance and flavour. Crown shaped croissant dough is filled with a changing roster of delights.Their almond frangipane stuffed queen is a perennial treat whilst a belting January special, the Boston Cream Queen, was filled with silky vanilla bean creme diplomat and dipped in rich and sticky chocolate ganache.

Their bakewell tart is one of my favourites too. What’s not to love about beautifully thin pastry, intense tart raspberry jam and sweet frangipane? It also happens to be vegan. 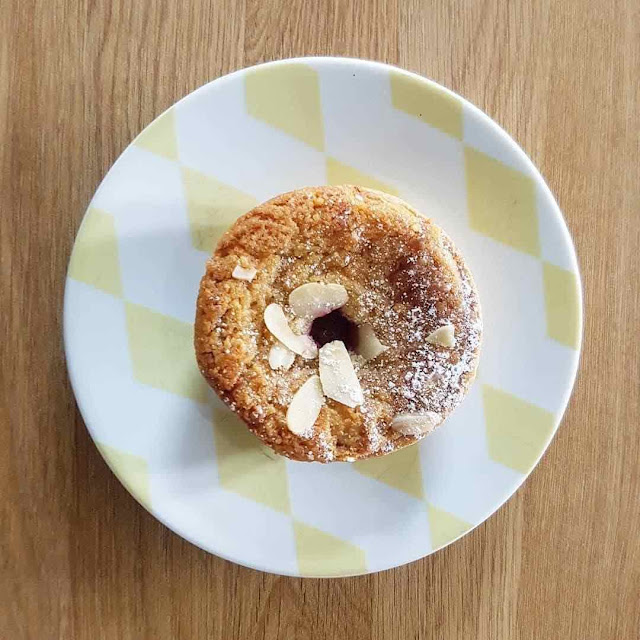 Friends in Knead’s bread certainly doesn’t let the side down.

Their honey and rye sour is a must buy - soft and slightly sweet of crumb, it’s enjoyably different to the usual sourdough. 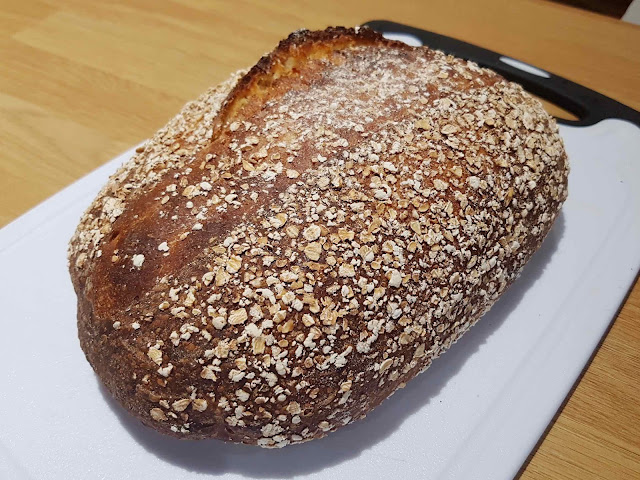 Their buttery, sturdy and not too sweet brioche baps are the ideal vehicle for massive hunks of protein whether it be Smokestak pulled pork or ersatz Korean style chicken.

Finally, if you’re in need of grocery items they sell a range of top notch Welsh produce. A top tip, if you haven’t tried Caws Teifi’s halloumi yet then you need to rectify that as soon as possible. It crisps up like no other. 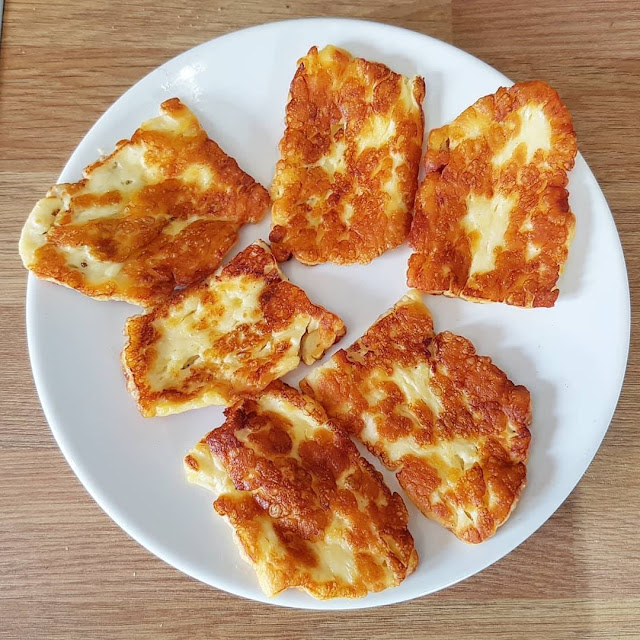 You can probably guess that I’m a bit of a fan of Friends in Knead. Next time you’re looking for a carb hit, get involved.
The Details:
Address - Friends in Knead, Roath Garage, Moy Road, Cardiff CF24 4EB
Web - https://friends-in-knead.myshopify.com/
Posted by gourmetgorro at 09:37 No comments: 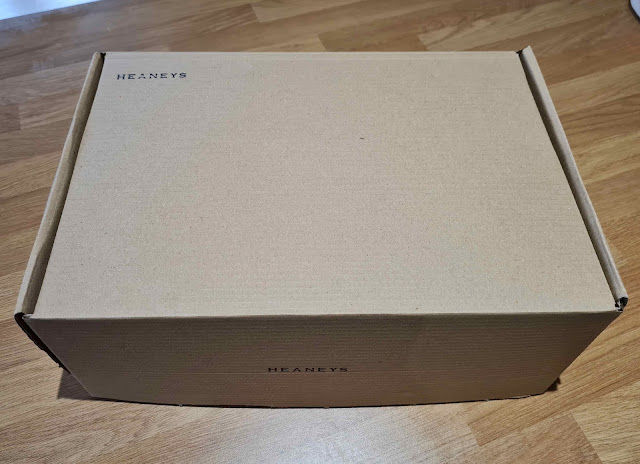 Whilst it’s fair to say that I’ve levelled up my banana bread and chicken wing cooking skills over the last 12 months, my general ability in the kitchen still sits somewhere between incompetent and inept.

So, the boom in at home meal kits is a constant reminder why restaurants perform such an essential public service. In the case of last week’s Heaney’s at Home box, it contained exactly the kind of intricate food which I couldn't be faffed to cook. And even if I tried it wouldn't taste 1% as good. 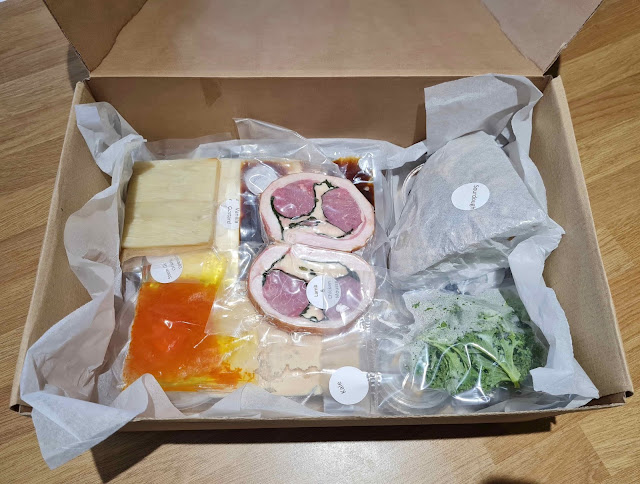 Heaney’s has been serving takeaway Sunday lunches for a while but their meal boxes are a recent addition to the menu. Available for collection or national delivery on Fridays, each meal box contains a tasting menu which serves one (£45) or two (£90).

With clear instructions, most dishes take just a few minutes to assemble. It was only the main course which stretched my multitasking skills to the very limit but it was still a quick cook time. 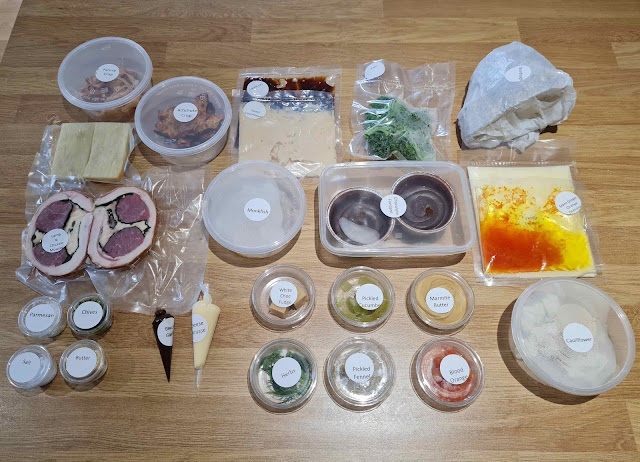 A quarter loaf of first rate sourdough was bronze of crust with an airy, tangy crumb. Served toasted, it was a dream slathered with Heaney's signature marmite butter - creamy, salty and savoury in equal measure. 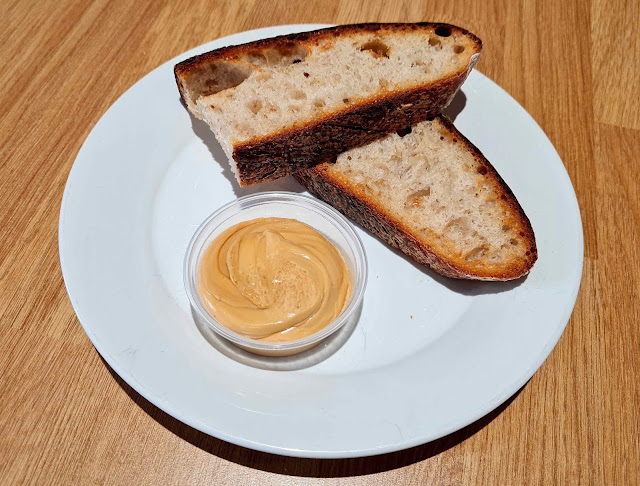 A ludicrously crisp and delicately earthy Jerusalem artichoke crisp was topped with blobs of delicate creamy comte mousse which was amped up by a dusting of intense parmesan and the allium hit of chive. 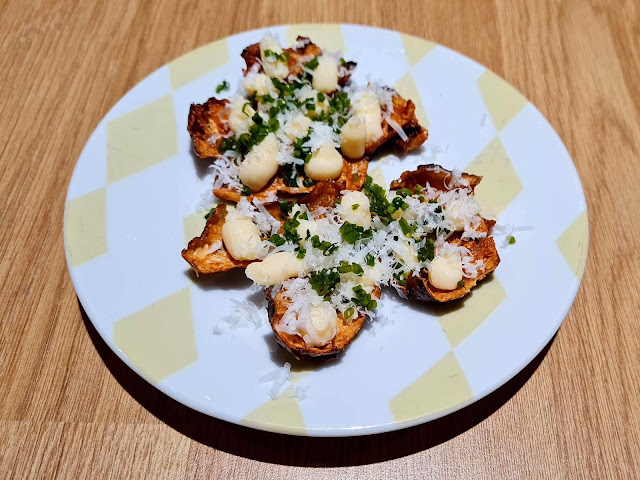 Heaney's cured monkfish is a mainstay at the restaurant and to be fair it's impossible to take a dish this good off the menu. Meaty slices of fish were bathed in a vibrant Asian-twanged blood orange and stem ginger dressing and topped with cleansing pieces of pickled cucumber, fennel and blood orange. 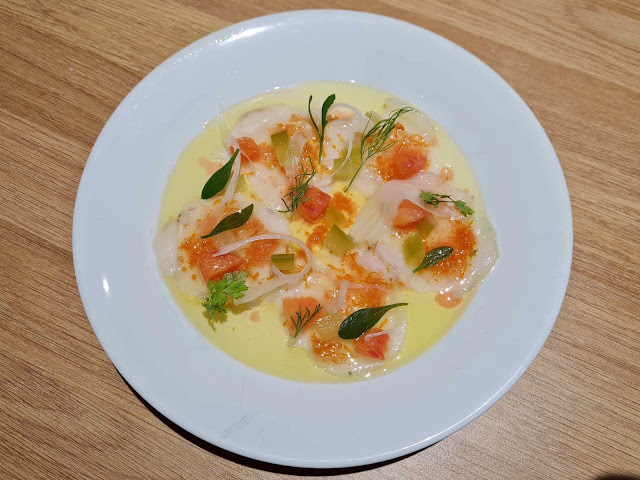 A beautifully tender piece of lamb saddle was wrapped in light spiced chicken mousse and ferrous spinach. A glossy jus tasted like the essence of lamb; it must have been the result of hours of effort. Indulgently crisp and tender lamb fat pommes anna, sweet and tangy black garlic puree, buttery kale and savoury yeast coated cauliflower were all bang on. It was only a fairly hefty amount of unappetising soft fat around the exterior of the meat which disappointed. 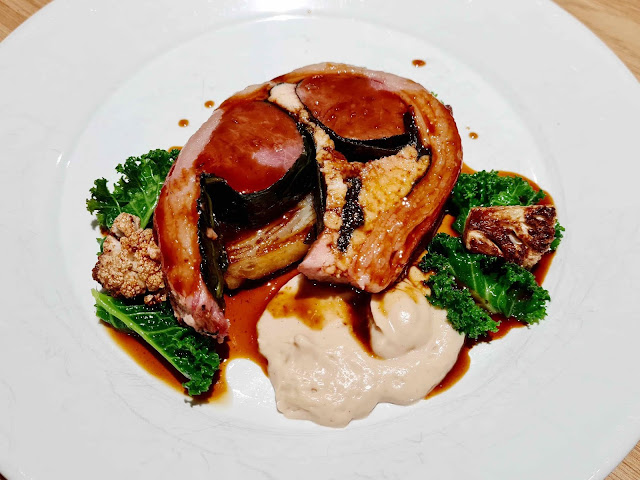 A top drawer chocolate fondant was given a canny twist by an addictive slightly savoury miso caramel filling and crisp fronds of delicately earthy parsnip. Vanilla fragranced custard was a killer accompaniment. 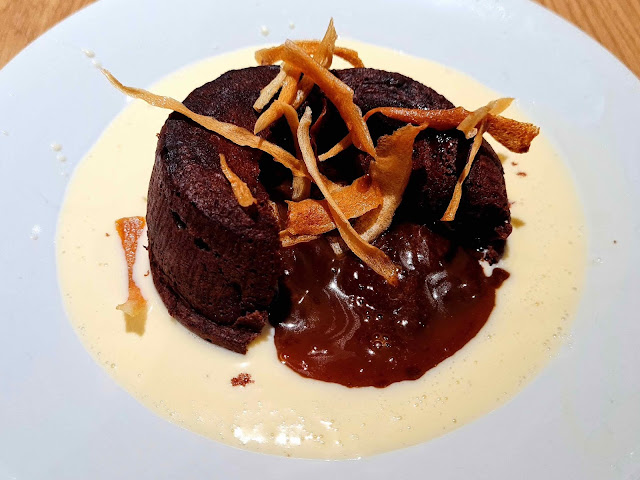 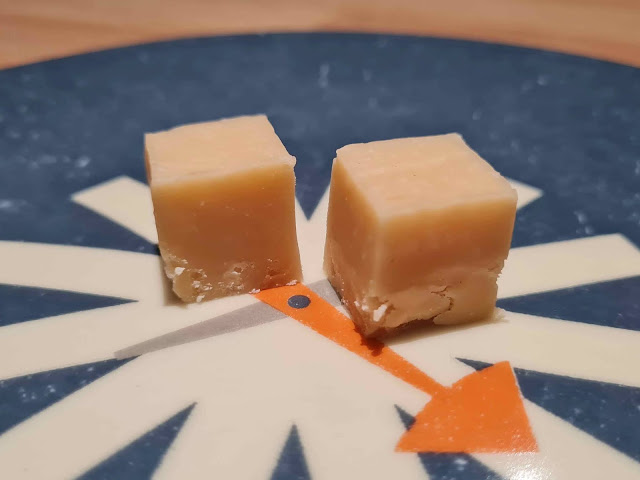 I’m really itching to try the new tasting menu at Heaney’s as soon as they reopen. In the meantime, their excellent at home box has certainly helped quell the cravings.
The Details:
Web - https://heaneys-shop.myshopify.com/
Address - Heaneys, 6-10 Romilly Crescent, Pontcanna, Cardiff CF11 9NR
Telephone - 02920 341264
Posted by gourmetgorro at 08:44 No comments: 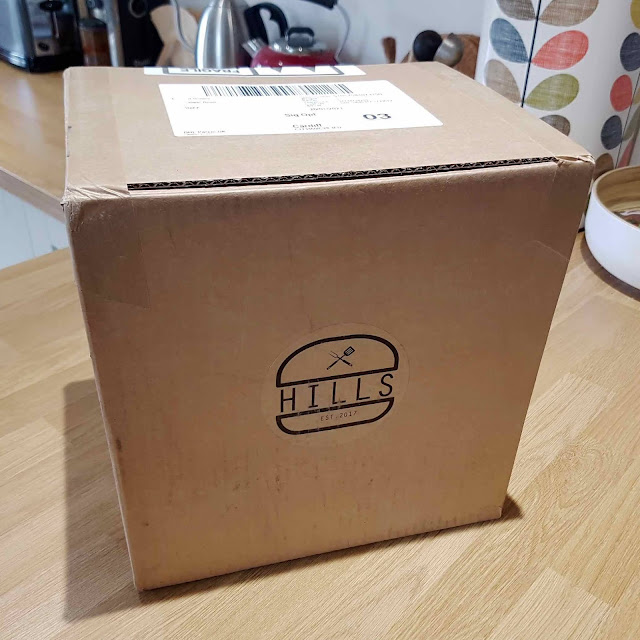 I'll keep this brief, after all how many words can I write about a burger?

Actually, on second thoughts, a burger this good deserves an essay of its own.

The burgers from Hills in Brecon are firmly established in Wales’s A-list. I visited them back in April 2018 and was seriously impressed. But, with every new eye popping Instagram post, their towering burgers look like they keep on getting better and better.

As an hour’s drive up to Brecon for a burger isn’t exactly a quick round trip, I was rather ecstatic to see they’d started selling at home burger kits a few weeks ago.

They go on sale on Mondays and sell out in a matter of minutes. Kits serve two (£18) or four (£36) and they also do vegan hot dog kits (£18). You can double up on your patties for £3.50 - note that a single Hills burger is actually a double and a double Hills burger is therefore a jaw-dislocating quadruple.

Everything you need to fix up a pair of gargantuan burgers is included in the kit from buns, ground Welsh beef, toppings, and sauces to Hills branded parchment so you can show off your creations on the ‘Gram. 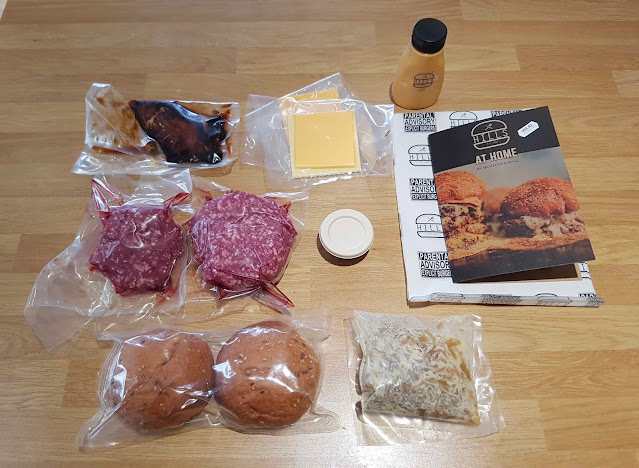 The cooking instructions require everything to be brought together at the last minute; it’s like conducting a beef orchestra, but the resulting symphony is worth the frenetic arm waving. 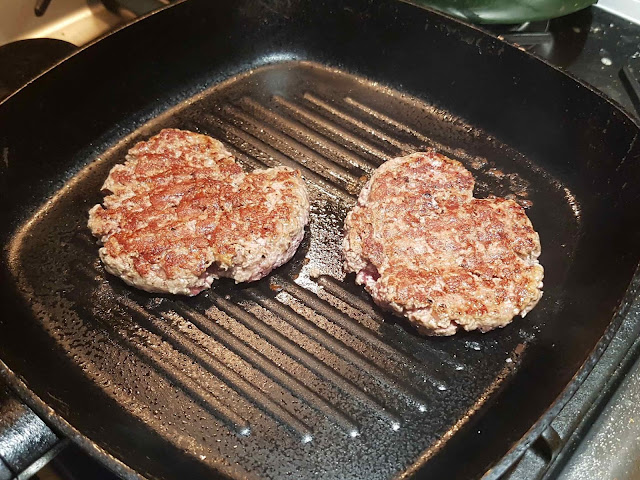 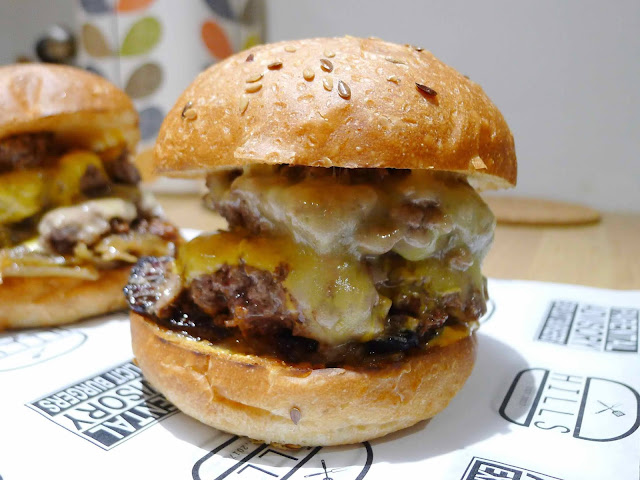 The burgers from Hills in Brecon are a seriously indulgent and messy delight. If you're looking for a burger dialled up to 11 on the flavour scale then I heartily recommend Hills at Home.
The Details:
Web - https://www.hillsbrecon.co.uk/hills-at-home
Posted by gourmetgorro at 08:45 No comments: