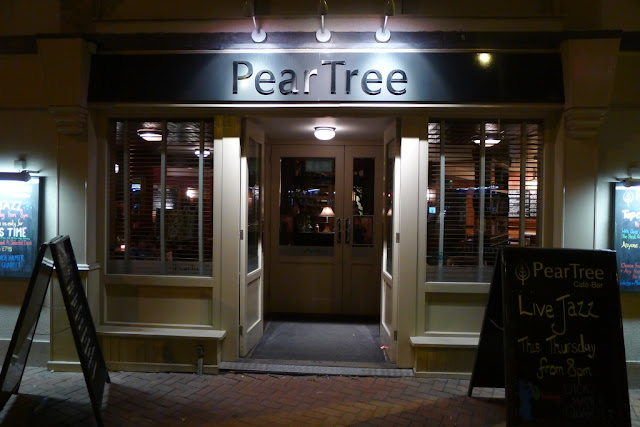 There’s nothing like a tasty burger…..
A soft and slightly sweet bun, a well seasoned and moist beef patty (ideally served medium), oozing melted day-glo yellow processed cheese, a weeny amount of salad – perhaps a slice of lettuce, gherkin and onion, a dollop of Heinz ketchup and a smear of mayonnaise are all it takes.
It’s simple isn’t it? 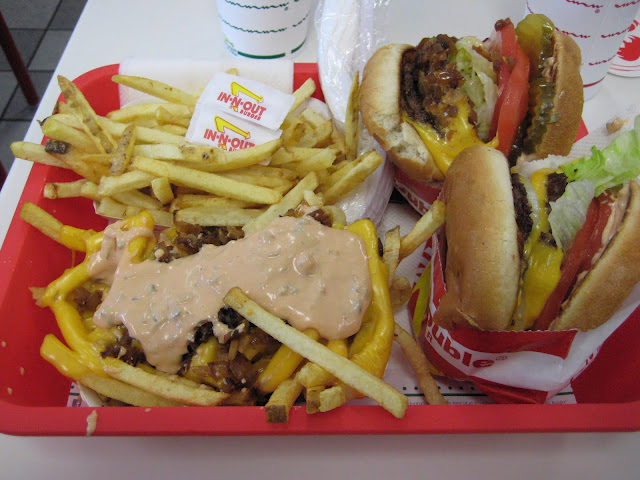 Well maybe not. I’m yet to have burger in Cardiff that’s any better than a Big Mac.
In fact nothing I’ve sampled has come remotely close to the superlatively brilliant In’N’Out or Byron Burger. And this is before I’ve even tried Lucky Chip or Meat Liquor which are reported to be London’s finest.
I’ve got a lot of love for the Pear Tree on Wellfield Road. It’s chilled out, they do nice coffee and cake for 3 quid, its got a decent range of lagers on tap (although their cheapest pint does cost more than £3) and it’s the only place I’ve ever won a pub quiz in my life.
However, the Pear Tree’s Dragon’s Breath Burger (£7.50) is definitely not Cardiff’s best offering. 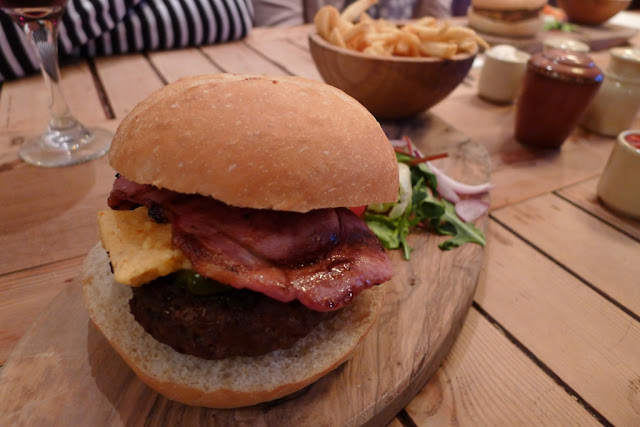 The bun was fairly well textured, the bacon was thick, and the jalapenos gave a decent kick to proceedings. The fries were nice and crisp as well. Unfortunately the beef patty was so well cooked that it was as dry as a garden during a hosepipe ban. Also the smear of Dragon’s breath chilli cheese had the odd grainy texture of all repugnant cheeses with bits in (Wensleydale with apricots anyone?...)
Don’t get me wrong it was very edible (I’ll enjoy pretty much anything). It just wasn’t very good.
So where’s Cardiff’s best burger to be had? Or do I just need to book another holiday to the USA?
The details:
The Pear Tree, Wellfield Road, Cardiff, CF24 3PE
Web - http://www.sabrain.com/peartree
Telephone - 029 2025 2042
Posted by gourmetgorro at 17:15 11 comments: 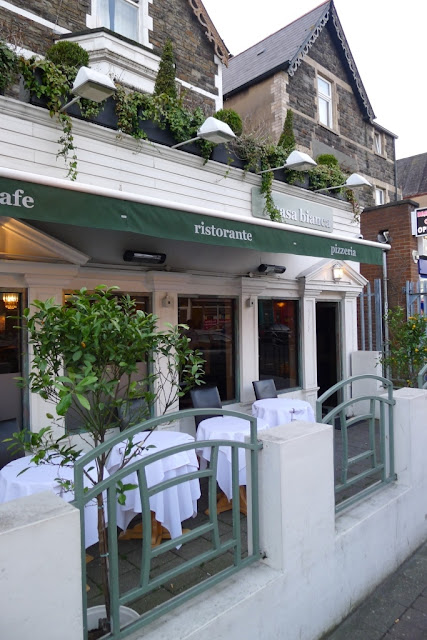 The service we received from Max at Casa Bianca last night is amongst the best I have ever experienced in Cardiff. This genial, good-humoured, knowledgeable, efficient and sharply attired individual (he’s on the left on the left of the picture wearing some awesome wide braces) elevated a very enjoyable meal to an excellent meal.

Casa Bianca is a Baroque styled haven nestled amongst the grey hustle and bustle of City Road. Its menu consists of traditional Italian classics (pizzas, pastas, meat and fish) along with a number of more contemporary interpretations of Italian food. The presentation of the food at Casa Bianca is worth a mention as well. Every dish was precisely plated and the use of micro-herbs showed a level of care far greater than would be expected from a local Italian restaurant. 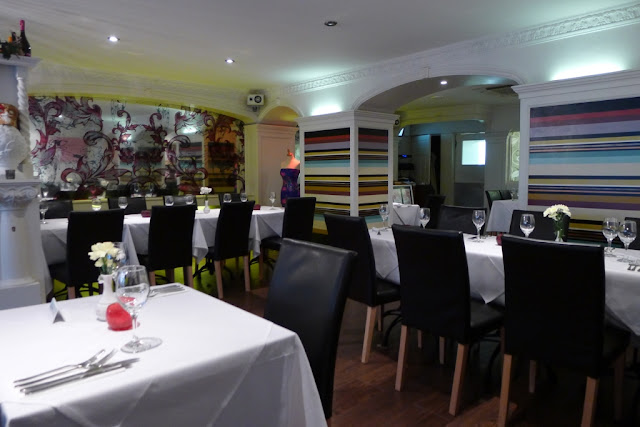 To start I ordered the Zuppe ai frutti di mare (£7.95). An intense fish broth was well seasoned and brim full of the taste of the sea. Generous quantities of langoustine, prawns, mussels, squid and clams satisfied my desire for protein and a lovely airy piece of homemade bread was ideal for dunking. 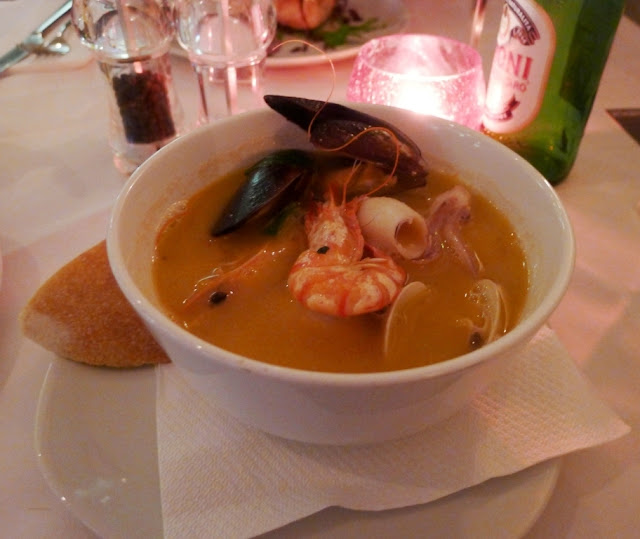 Mrs G ordered the Barchetta di verdure (£5.95). Warm, soft ciabatta was slathered with soft, creamy cheese and topped with perfectly seasoned chargrilled aubergines and courgettes. This was a master class in simplicity. Every flavour and texture was on the nail. 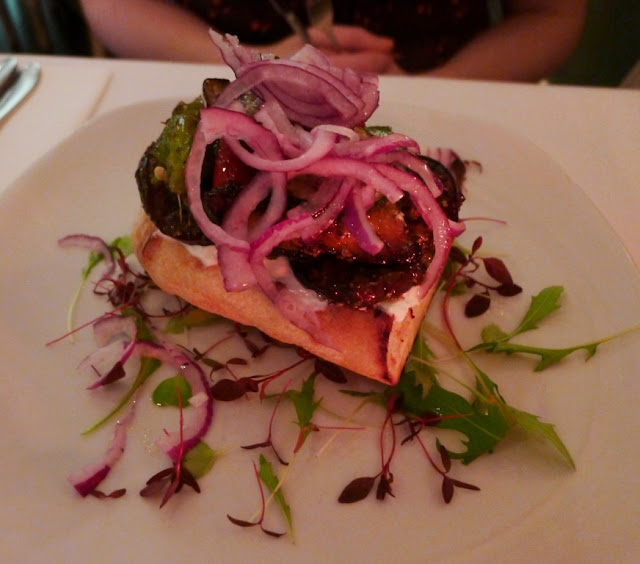 Next up was mains and Mrs G’s Tagliatelle al pesto rico (£9.90) was a simple yet highly effective combination of al dente pasta, light and fresh tasting pesto and a scattering of soft new potatoes and French beans. Her side dish of a lightly oiled red onion and tomato salad (£3.25) worked perfectly. 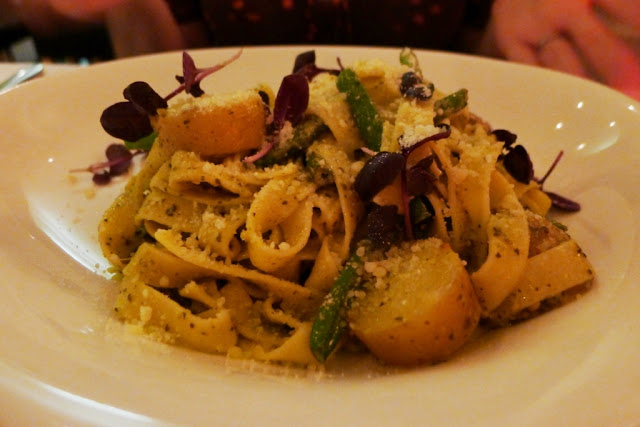 The standout element of my main of Agnello al Forno (£16.95) was the red onion and rosemary sauce. Some kind of saucery (I couldn’t resist) must have been responsible for the amount of flavour it contained. Meaty, smokey, sweet and herby, Mrs G and I licked the plate clean and were even tempted to lick the drops I spilt on the table cloth. The rack of lamb itself was well flavoured but a lot of hard work was required, even by my standards, to get all the meat off the bone. The accompanying vegetables too were well seasoned but were a little over cooked. 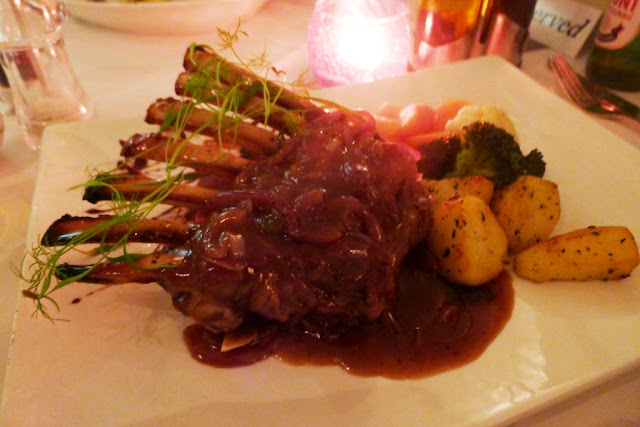 Casa Bianca’s dessert menu is remarkably brief consisting of cheesecake, tiramisu and affogato. I guess it must mean the chef has total confidence in this limited range of homemade desserts. And he has every reason to. Mrs G and I were presented with two comically large slices of cheesecake which looked as though they could even defeat my appetite. However, the light mousse-like consistency of both my Baileys cheesecake (£3.95) and Mrs G’s lemon cheesecake (£3.95) was a revelation. It was so good I’d return to Casa Bianca for this dish alone. 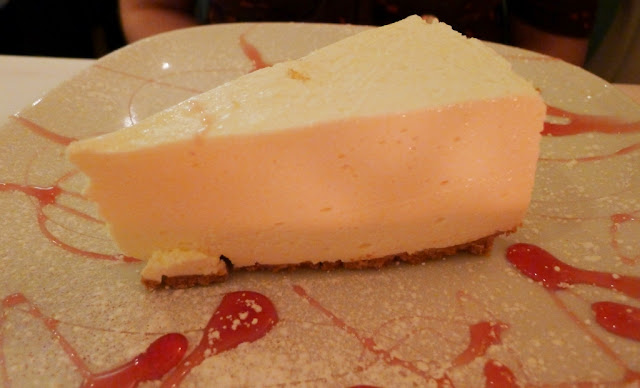 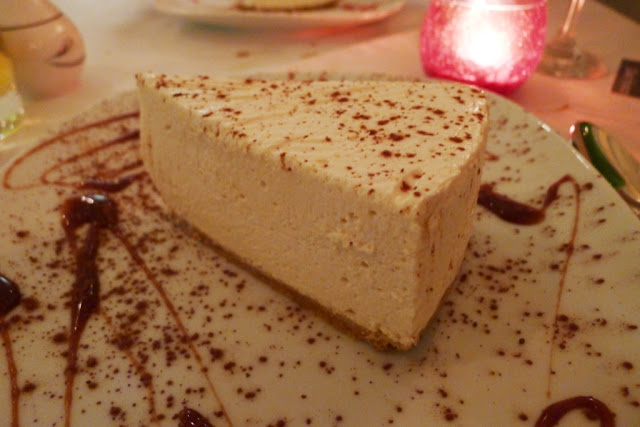 Casa Bianca is another homely Italian restaurant serving up delicious food which I’ll add to my collection along with Casanova. 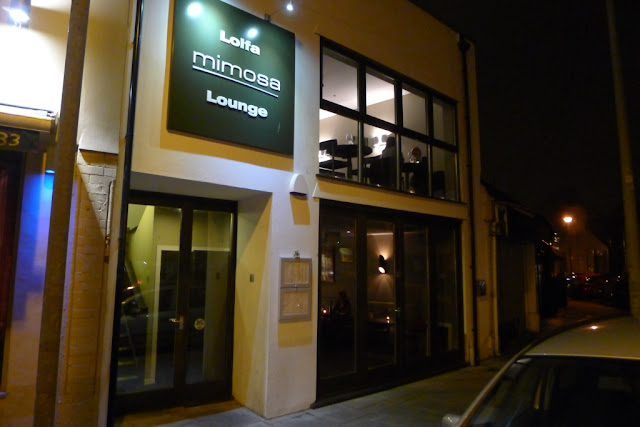 Which restaurant in Cardiff best showcases Welsh food? There aren't many which jump out. Ffresh ticks a lot of boxes on the produce front but their cooking style is heavily French influenced (parfaits and confits litter the menu). The Armless Dragon also springs to mind but I've never actually heard of anyone who's visited (Is it still open? No is the answer).

Certainly a leading contender is Mimosa. Welsh produce and some of Wales' most famous dishes including cawl, faggots and Welsh rarebit are scattered across the menu. Mrs G also informed me the restaurant's name pays tribute to the ship which carried the first Welsh emigrants to Patagonia in 1865. There I was thinking it was named after a type of plant or cocktail.....

I'd previously visited Mimosa in the Bay around 4 years ago and vaguely recollected that I'd enjoyed my meal there. So I was looking forward to a visit to their recently opened Pontcanna outpost. 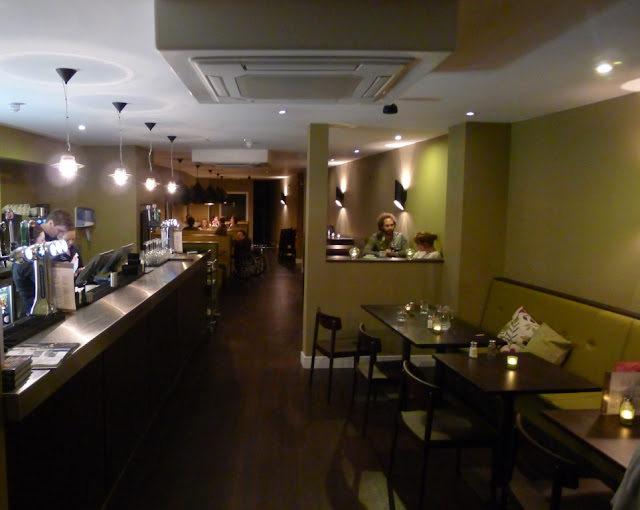 Mimosa Pontcanna feels almost more like a bar than a restaurant. Dark wood and plenty of spotlighting give it a moody atmosphere. It's the kind of place you'd happily spend an evening drinking cocktails whilst picking at a burger or a salad. Alternatively, like us, you could spend an entire evening lounging in one of their comfy banquettes whilst gorging yourself on food and working your way through the cocktail menu. Between us we sampled most of their cocktails; Caipirinhas, Daquiris, Mojitos, Singapore Slings and White Russians were all excellent.

The menu at Mimosa is fairly short but well balanced and is padded out with a decent range of daily specials from the blackboard. 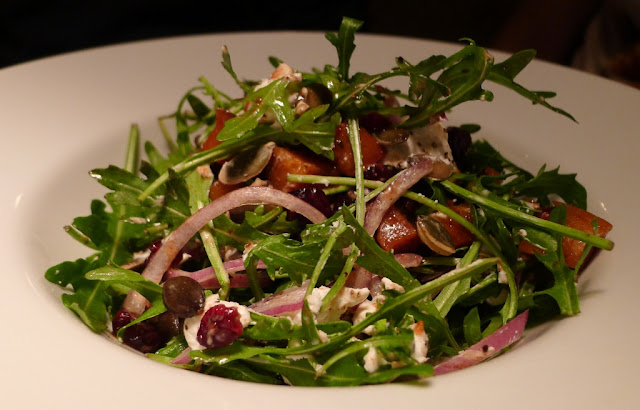 Another friend enjoyed a classic cawl (£5.95) served with a wedge of Gorwydd Caerphilly atop a slice of bread. 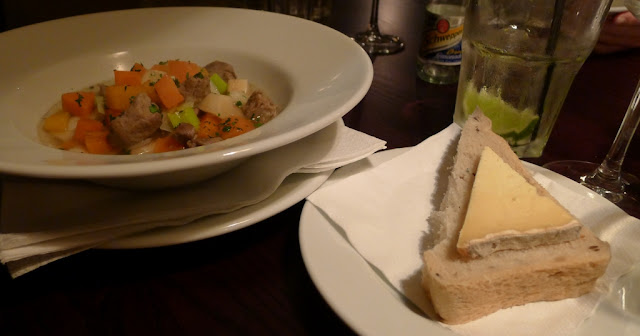 As for me, I ordered Moules Marinieres (£7.50). The mussels were plump little fellas and I happily mopped up the sauce of white wine, cream, garlic and mussel juice. So far so excellent. 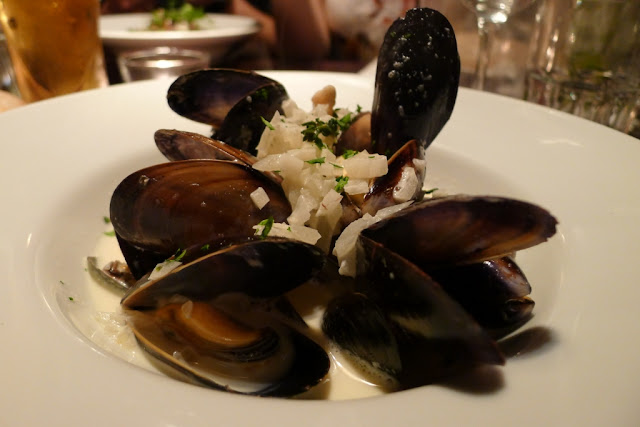 Main courses were more hit and miss. A special of butternut squash risotto with spinach and a caper & walnut dressing was well received (£9.95). So too was a main course sized portion of the goats cheese & squash salad (£9.95). However, 3 of our party opted for one of the specials; braised pork belly in a white wine broth with fresh clams, carrots, leeks and star anise. In the words of today's youth this dish was as an EPIC FAIL. A pleasant slice of pork belly swam in a pool of watery and flavourless broth, save for the mildest hint of star anise. A further consequence of the pork belly's evening dip was that its main selling point, the crackling, was as soggy as a day old bowl of weetabix. 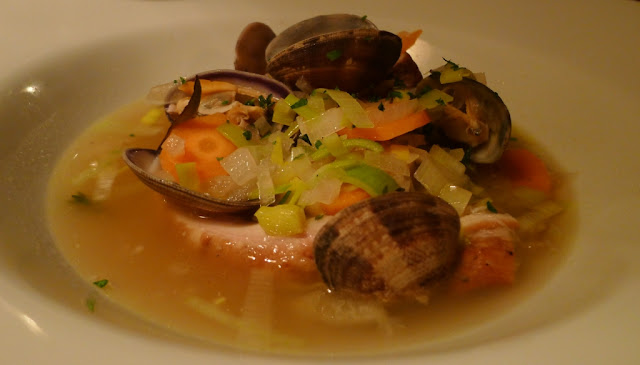 In spite of half the table's disappointment, my main dish was excellent. A Welsh Black 8oz Sirloin (£16.95) was served a perfect medium rare. It was tender and rammed with flavour. It's accompanying bearnise sauce was lush and so too were the chips (even though they were on the soggy side) which tasted like they'd been cooked in a bucket of meat dripping. 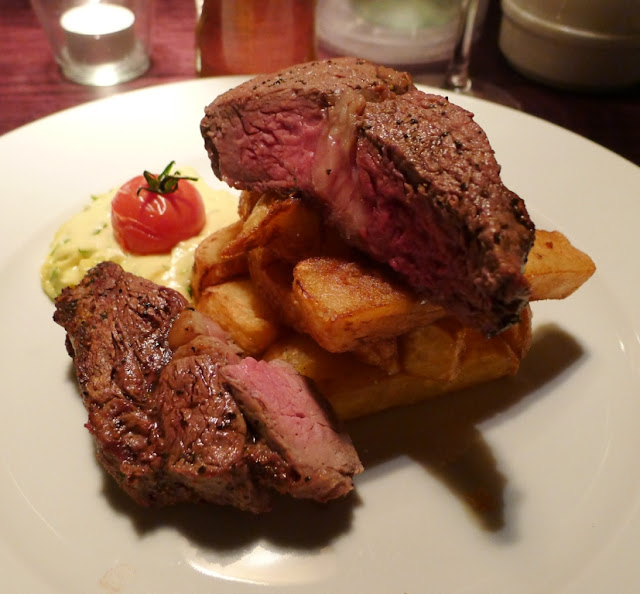 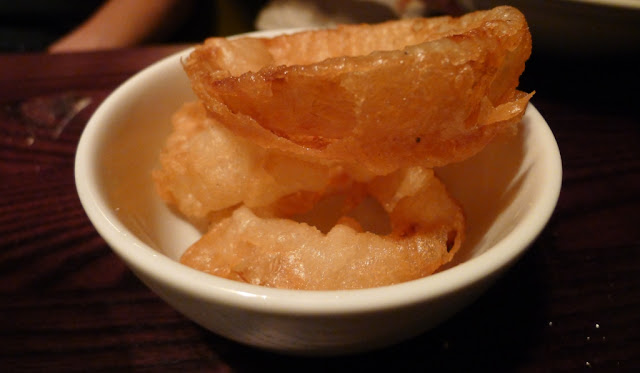 I was stuffed by this point and so it was time for dessert. Unfortunately my apple crumble (£4.95) was disappointing. The stewed apple was perfectly soft and sweet and the Cowpots chocolate ginger ice cream worked a treat. However, a lacklustre crumble topping made the dish more apple powder than apple crumble. 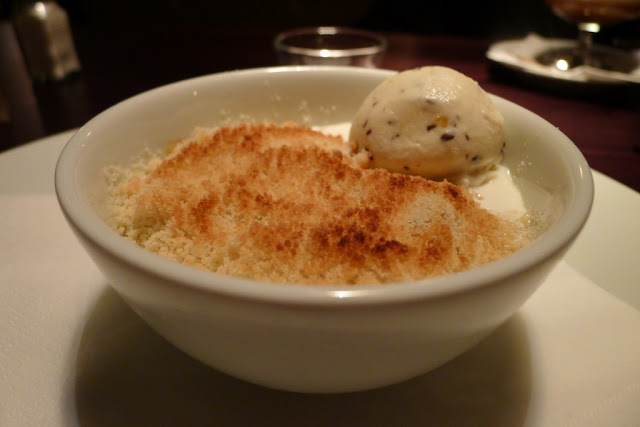 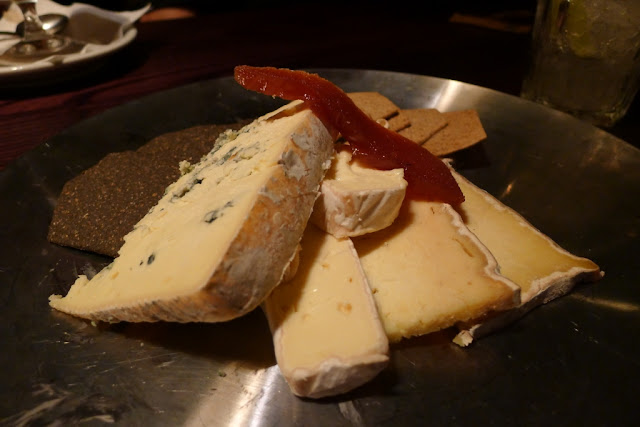 Mimosa is a cracking neighbourhood restaurant. Service is friendly and efficient, cocktails are on the nail and it's about as close you can get to a taste of Wales in our capital city. 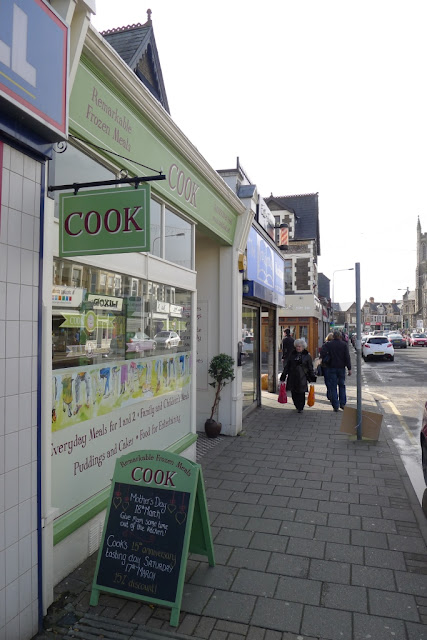 What do you get if you cross Iceland, Marks & Spencer and Lush Cosmetics?

It would probably be something a bit like Cook. This independent chain of around 55 shops sells posh and slightly expensive (Marks & Spencers) frozen ready meals (Iceland) which tell you on the packet which individual chef has prepared your meal (Lush).

It's all rather clever as far as business models are concerned. With frozen food there's far less wastage compared to fresh so franchisees aren't counting their weekly losses due to spoilage. 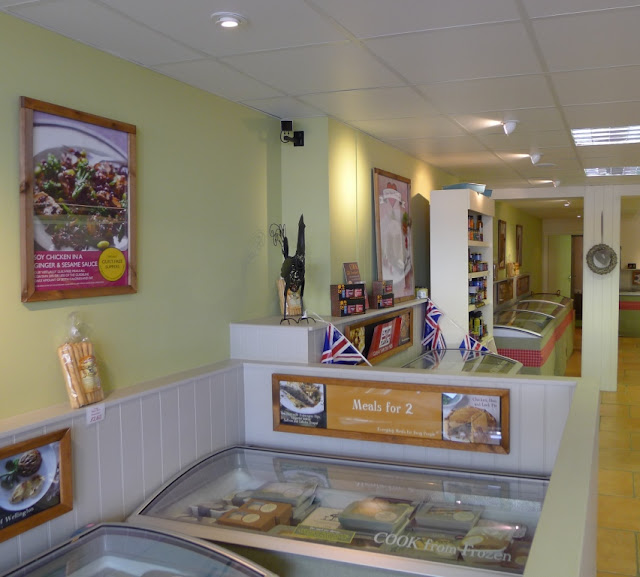 The glamour of freezer food shopping was helped by a friendly shop assistant who offered us help and a free taster of some rather nice chocolate brownie. Also the gingham fabric covering each freezer softened the harsh reality of each white juggernaut.

Cook have a range of ready meals for 1, 2, families and larger parties. It's all the kind of stuff that you could pass off as home cooking if you're so inclined (as long as your dinner guests don't also shop at Cook!). We were catering for 3 people but in reality our dishes would have easily served 4. The bill came to £26 but our mains were at the cheaper end of the spectrum. Also all our food cooked from frozen in around an hour but Cook sell some dishes which you do have to defrost. 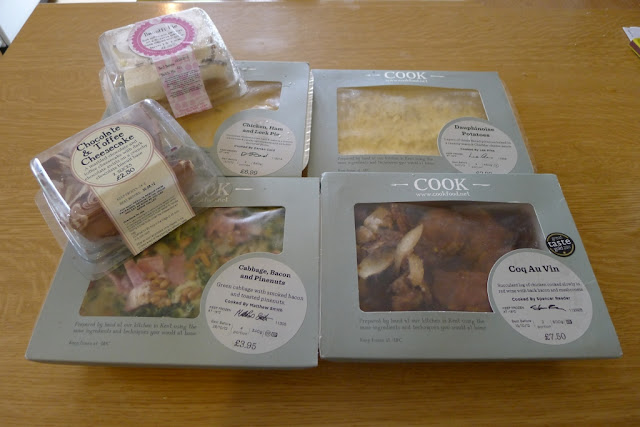 A gold great taste award 2011 winning Coq au Vin (£7.50) was superb. Moist chicken was coated in a rich sauce of red wine, butter, brandy, redcurrant jelly, garlic, thyme, bay and other ingredients. A generous amount of bacon, mushrooms and onions bobbed amongst the sauce. A chicken, ham and leek pie (£6.99) was packed with tons of meat and leeks enrobed in a lovely white wine and parsley sauce. The shortcrust pastry topping too was excellent. 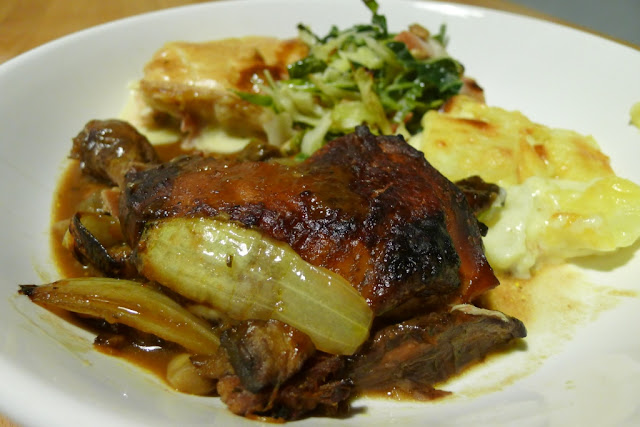 Sides were less impressive but still delicious. Dauphinoise potatoes (£2.99) were seriously creamy but could have done with a much bigger hit of cheese. Equally the cabbage with smoked bacon and toasted pinenuts (£3.95) worked well but didn't need the annoyance of aniseed brought by a scattering of caraway seeds. 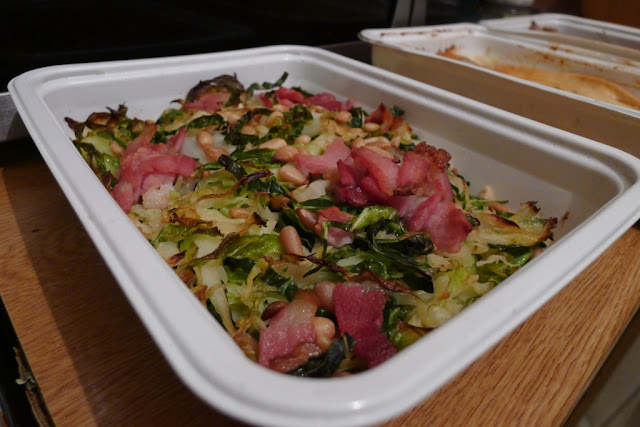 Desserts were tasty but unremarkable (I've had better frozen desserts from Tesco). A chocolate and toffee cheesecake (£2.50) did exactly what it said on the pack. The base was commendably crisp and the sharpness of cream cheese tempered the richness of the chocolate and toffee. The banoffee pie however had a little too much cream, not enough banoffee and the biscuit base lacked a bit of bite. 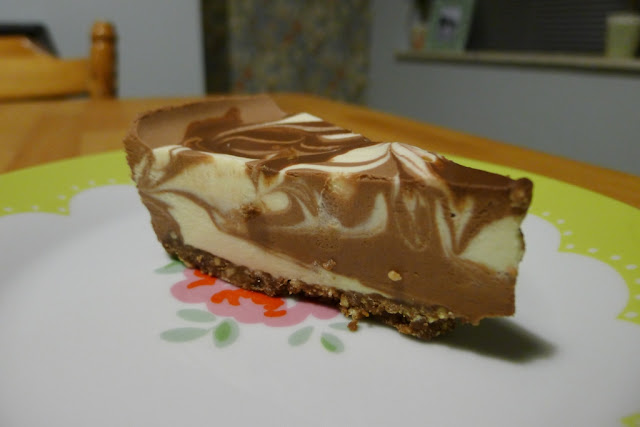 Cook is a fine addition to the school of lazy, tasty 'cooking'. Thankfully there are no prawn rings or D-list celeb ad campaigns in sight.