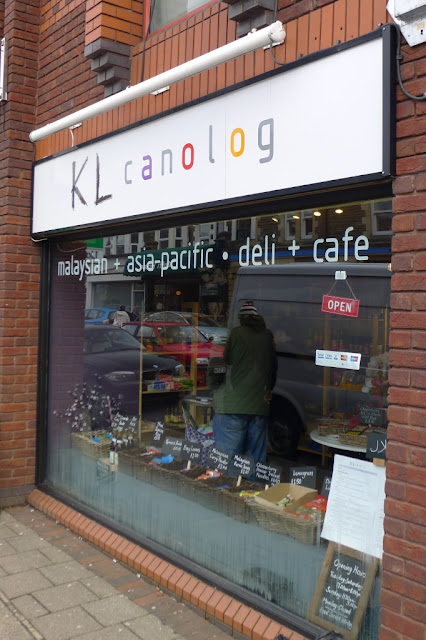 Whenever anywhere new opens on Wellfield Road that isn’t a café, charity shop or purveyor of knickknacks, it’s a cause for celebration.

Ok, I concede that KL Canolog is a café. However, the Malaysian food and drink they’re serving makes for a far more interesting lunch than a tuna melt and cinnamon lattefrappechino from the Caffe Costabucks opposite. 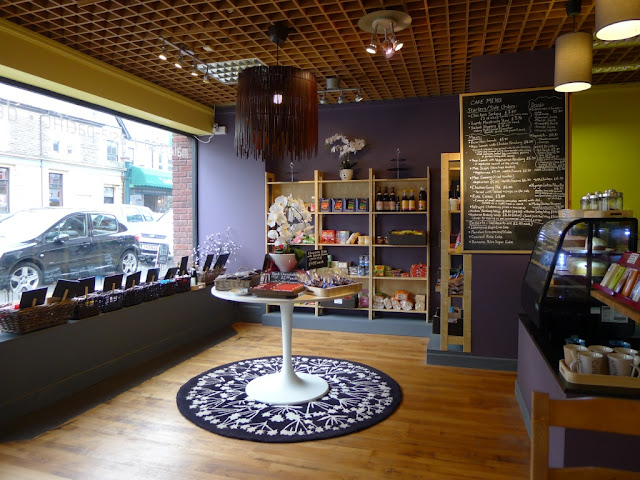 KL Canolog’s menu is stuffed with food that I want to eat. It made it rather difficult ordering lunch on my tod without Mrs G accompanying me to pilfer food from.  Chicken laksa, satay skewers, mee goreng, chicken curry pie and a chicken rendang wrap will all have to wait for another day. 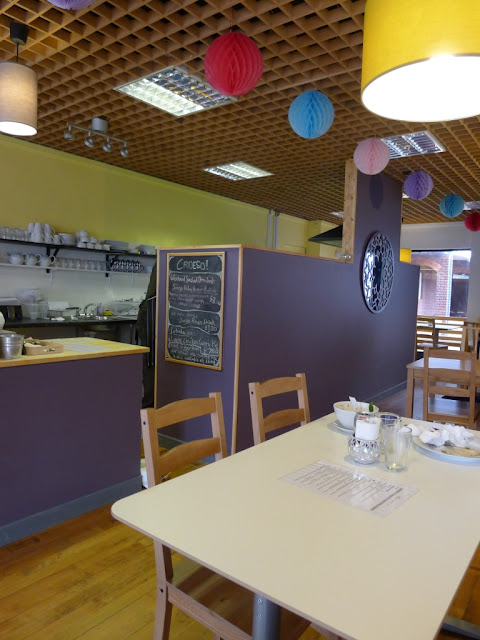 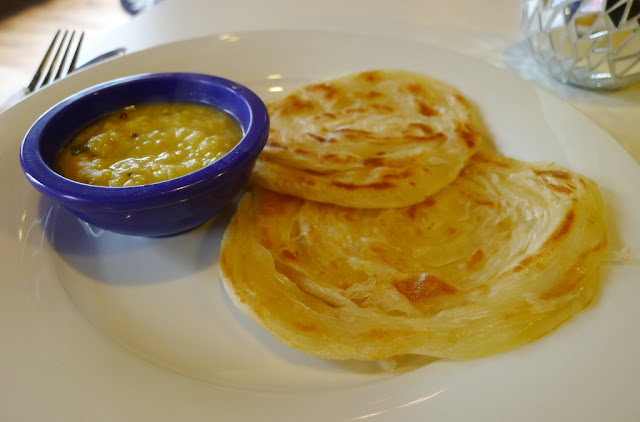 Next up, the nasi lemak with chicken rendang (£6.80) was a plate-full of goodies. Tender chicken in a fairly dry, spice-packed sauce was served with fluffy, coconut infused rice, crispy & fishy dried anchovies, crunchy peanuts, sweet & spicy chilli sambal, half a cold boiled egg and slices of cleansing cucumber. Every mouthful offered up a combination of different textures, flavours and temperatures. 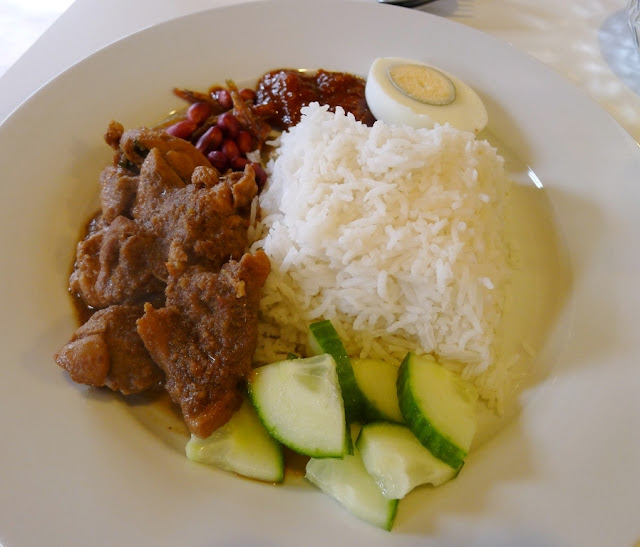 For dessert, I thought I’d put KL Canolog’s teatime credentials to the test with some tea and cake. Despite the draw of the coconut rose cake and lemongrass & kafir lime cake, I plumped for the screwpine leaf (pandan) cake (£2.50) as it sounded the oddest. It turned out it wasn’t strange all - the pandan lent a milky, vanilla sweetness to the butter icing sat atop a slice of pretty decent sponge. 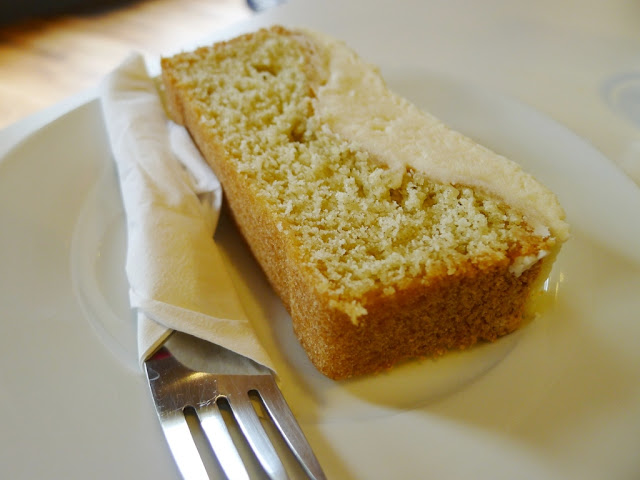 I washed it down with a comfortingly sweet & milky cup of teh tarik (£2.10). It tasted like chai without the spice. 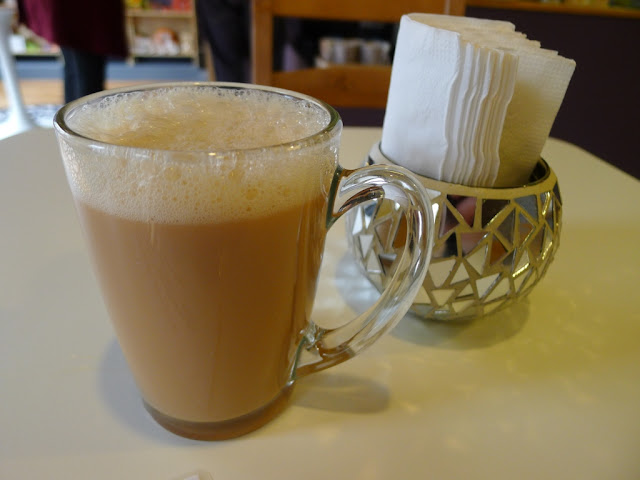 KL Canolog is a welcome addition to Wellfield Road. The serene atmosphere, interesting menu, short wait for food and novel Asian deli section all make this my kind of place. 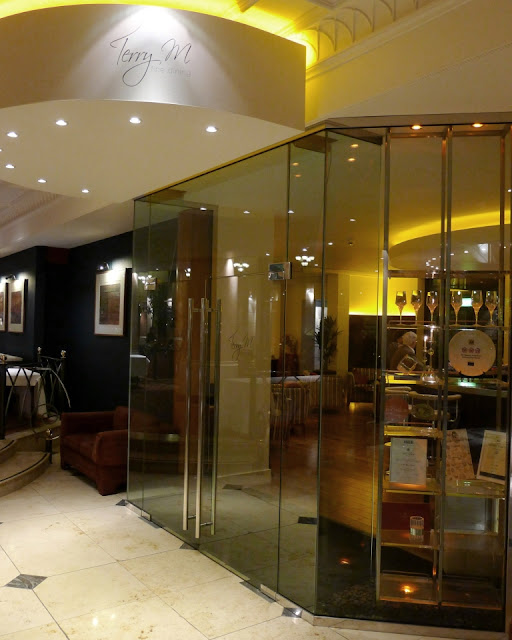 The last time Mrs G and I visited the fine dining restaurant at the Celtic Manor, just over a year ago, it was named Crown at the Celtic Manor. In the interim period, the end of a tie-up between Celtic Manor and Crown at Whitebrook has resulted in a name change to Terry M (after the hotel’s billionaire owner).

Still in place since our previous visit are head chef Tim McDougall and a familiar front of house team. As such, little has changed; service was warm yet not overbearing and the classically prepared food was mostly very good. 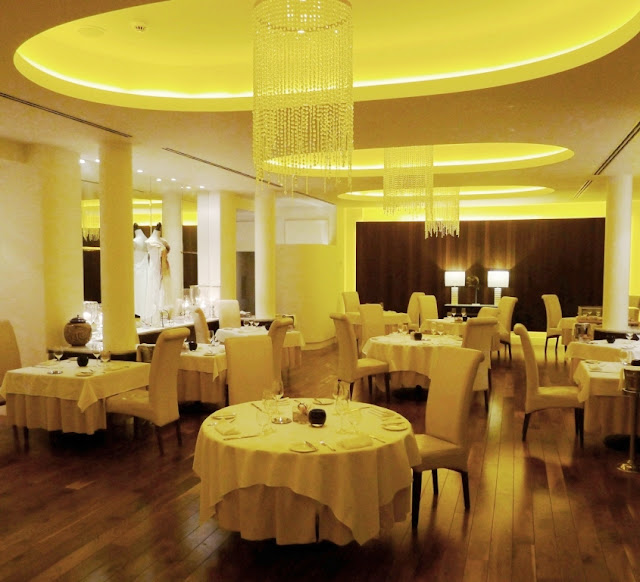 Whilst Mrs G savoured a pre-dinner champagne cocktail and I begrudgingly sipped on a designated driver’s ginger ale, we were brought a selection of canapés. Mushroom en croute, confit salmon with beetroot, ham hock terrine and a chicken consommé were all tasty but none delivered bags of flavour. 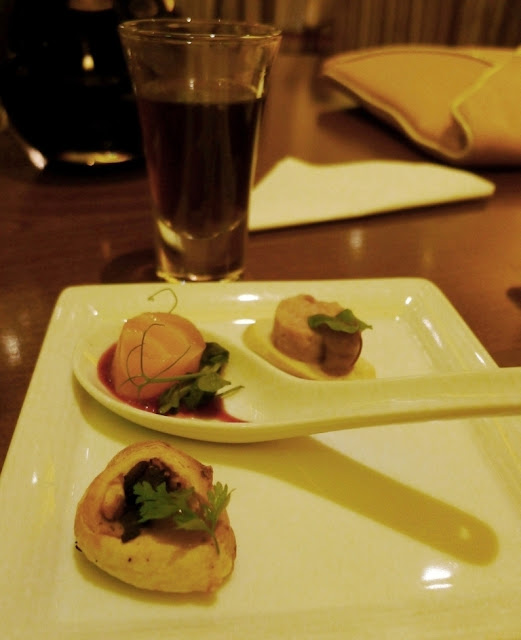 Having migrated to the dining room, I devoured a handful of textbook white and walnut & date rolls served with salted butter. 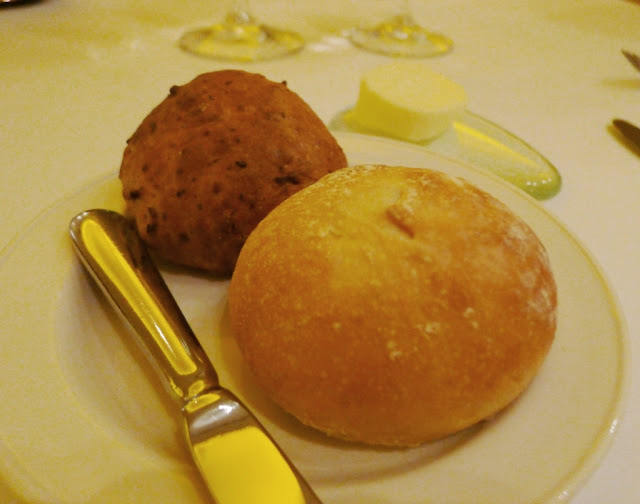 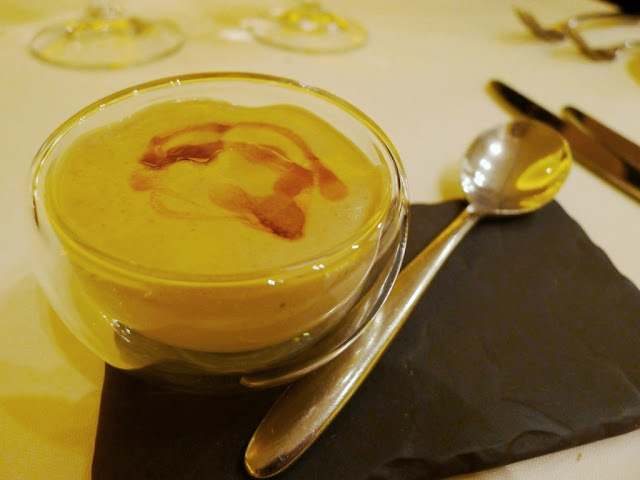 A kaleidoscopic salad of warm earthy beetroot, creamy Ewe’s milk curd and refreshing apple was a light start to the meal. I think, however, it could have done with a bigger kick of the advertised horseradish. 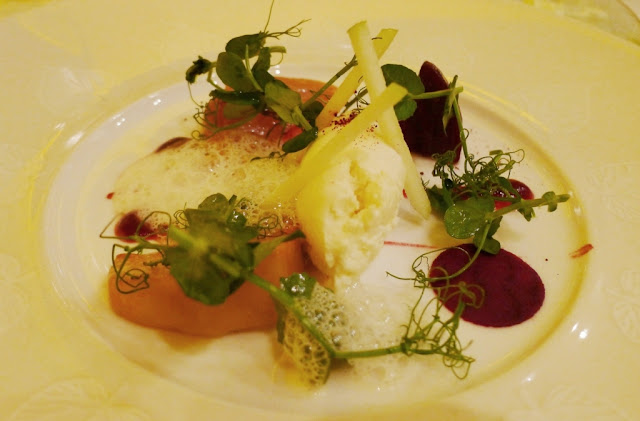 Next up was an excellent double-decker pate served with toasted brioche. Smooth, rich duck liver pate surrounded coarse, meaty ham hock. A smear of zingy parsley puree sliced through the richness of the dish. 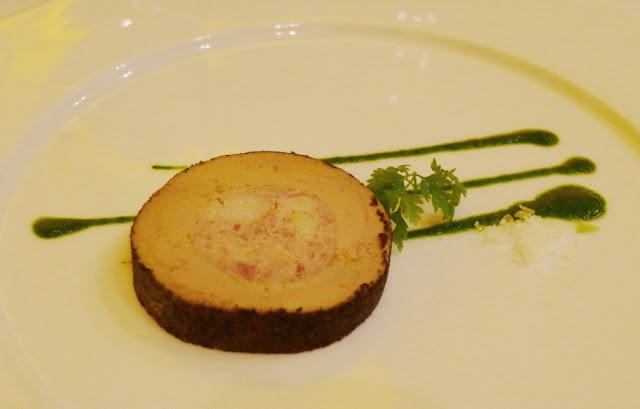 The top-notch fish course delivered an absolute gem of a scallop served with 50 shades of cauliflower – puree, pieces of romesco and a moreish deep fried cauliflower filled beignet. A subtle hint of truffle added extra opulence to the plate. 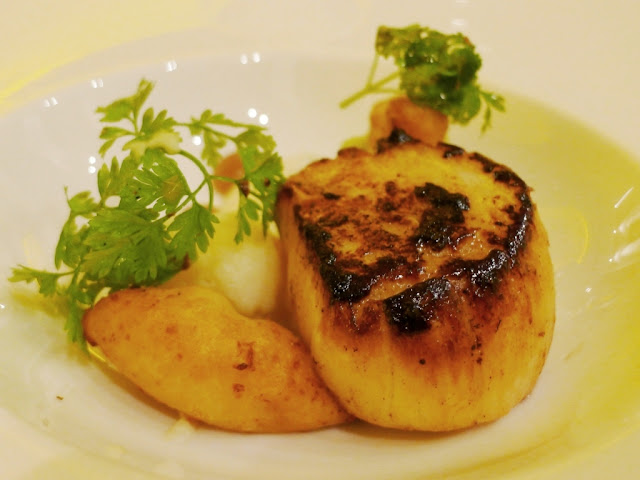 What should have been a superb main was simply good due to a couple of elements. Whilst all the flavours were precisely balanced – sirloin of beef, velvety truffled mash, fennel compote, burly bone marrow jus and earthy wild mushrooms, the meat’s lack of tenderness and the thinness of the sauce let the side down. 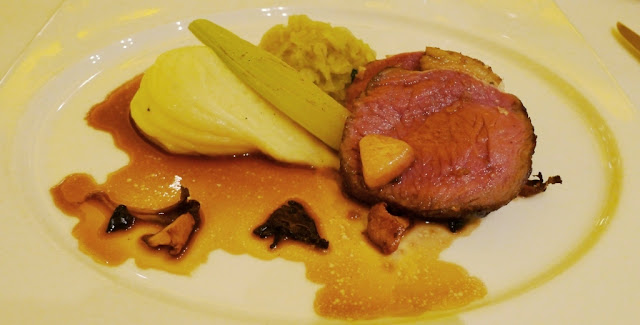 First up on the dessert front was chocolate bavarois. A refreshing blood orange salad and sharp grapefruit mousse complemented the richness of the chocolate well. 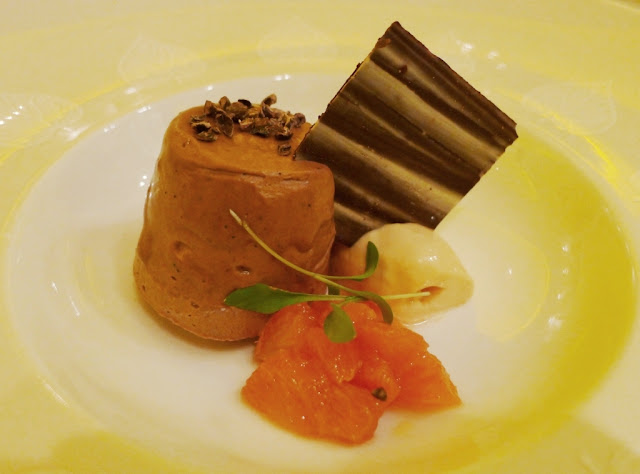 A proud plum soufflé was one of the stand-out moments of the night. The fluffy soufflé, Winter-spiced pain d’epices ice cream and palette warming crystallised ginger were all superb. 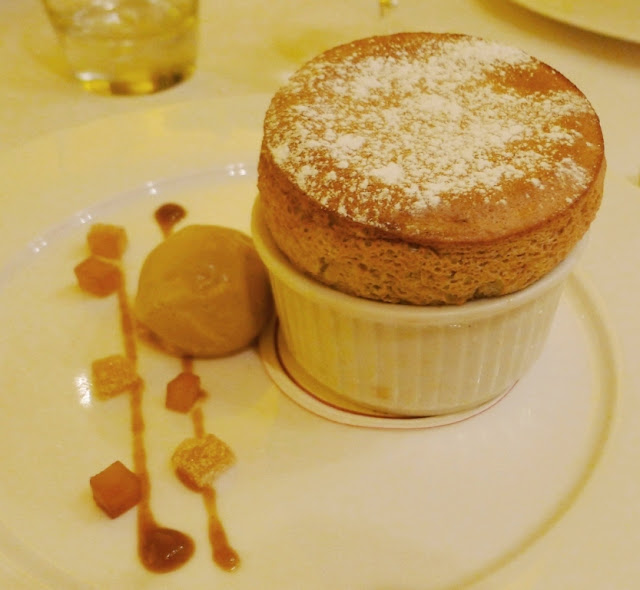 Lastly, a belt-loosening proportioned selection of petit-fours rounded off the meal. Highlights included a wafer-thin cinnamon biscuit, a wobbly strawberry jelly and a rhubarb macaron. 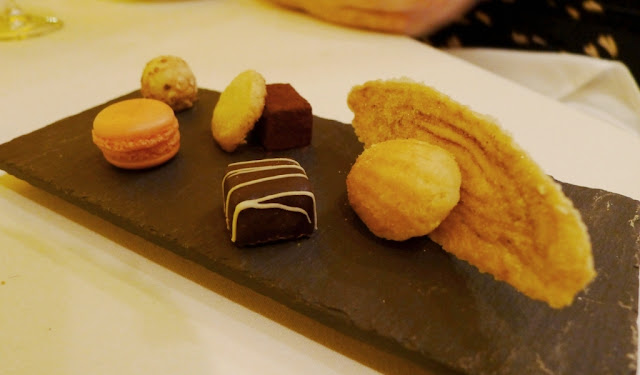 Like my previous 2 visits, we had a cracking meal at Terry M. It is a little pricey but the express lunch menu, which offers 3 courses for £31.95 including half a bottle of wine, looks like a bit of a bargain.

I was invited to Terry M as a guest of Celtic Manor. All food and drink was complimentary.

Posted by gourmetgorro at 12:18 No comments: 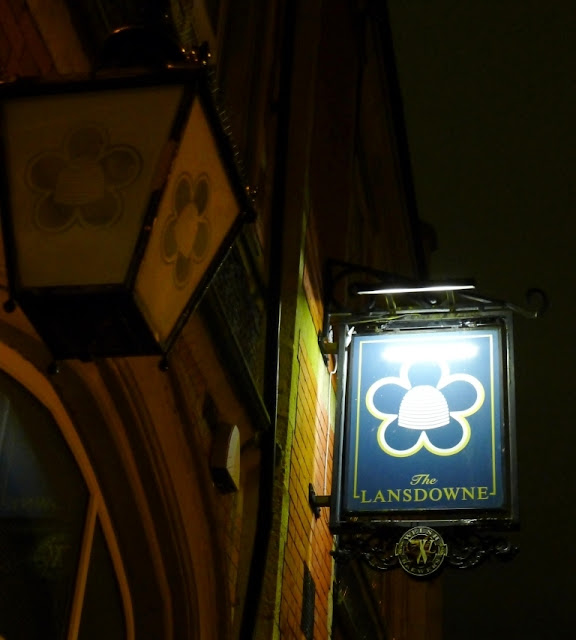 There’s no doubt the team behind the Lansdowne has done a quality job at transforming what was once an uninviting locals’ pub into a quality boozer. 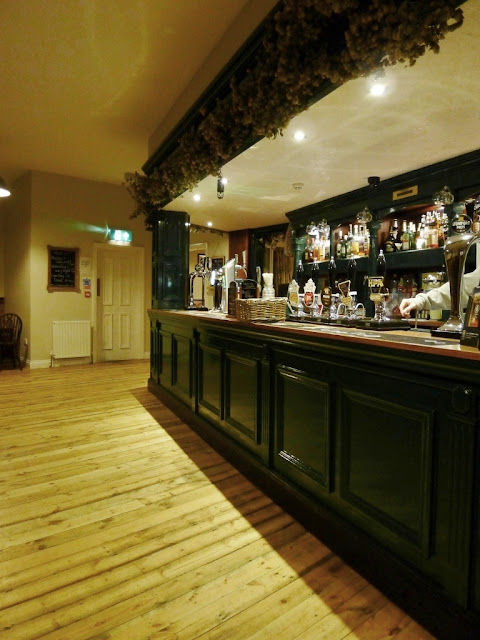 They’ve successfully combined sparse, almost Scandi-minimalist wooden décor with an excellent range of Wye Valley, Celt and Tiny Rebel ales on tap. However, unlike most recent trendy pub openings, The Lansdowne serves food which is closer to pub than gastro pub. Printed menus are ditched in favour of a wall-mounted board, there are no starters, orders are placed at the bar, mains include pie & mash and chicken curry, and there are only 2 desserts. 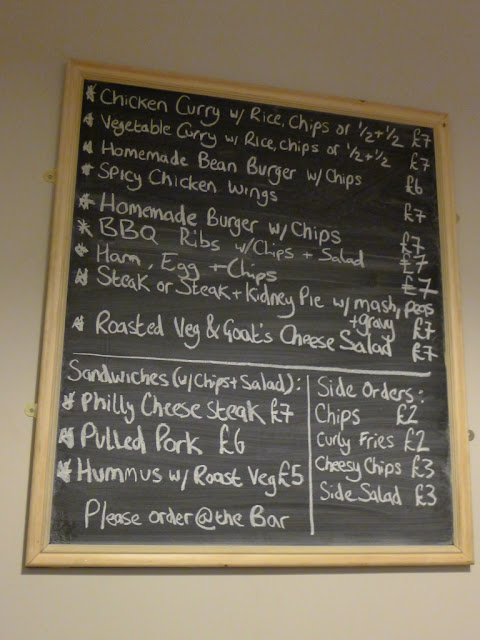 After a ravenous 45 minute wait for our food (I even came close to ordering a pickled egg), I was ready to inhale my burger with bacon and cheese. 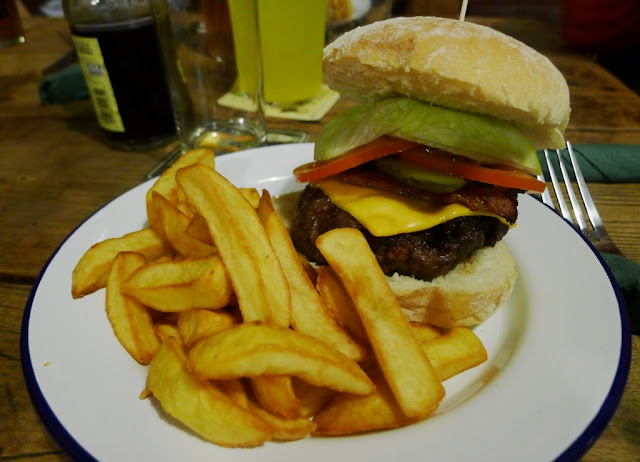 1. How was the patty? Well done and as a result lacking a little moisture. Its flavour was fairly good.

2. How was the bun? A decent floured white bap.

3. How was the other stuff in the bun?  Excellent crispy thick cut bacon, guilty-pleasure melted processed cheese, acidic and crunchy cornichons, iceberg lettuce and thinly sliced tomatoes - pretty much the perfect combination as far as I’m concerned. 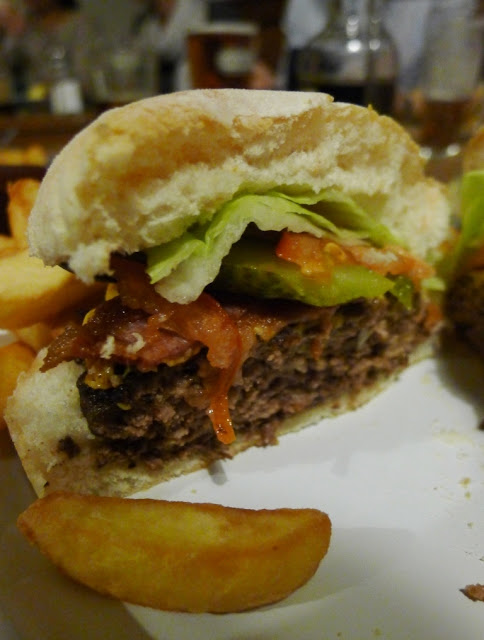 4. How were the chips?  Limp and probably out of a bag. They were reminiscent of those I was served at Gateshead Leisure Centre café in 1989.

6. What’s the verdict? With a few tweaks, this decent burger could be very good. Essentially, the patty needs a little less cooking and the chips replacing.

Mrs G ordered the homemade bean burger (£7) in a fleeting moment of January healthiness. It had a good chilli kick and was packed with beans…after one mouthful of my burger, however, she begrudgingly realised the error of her ways. 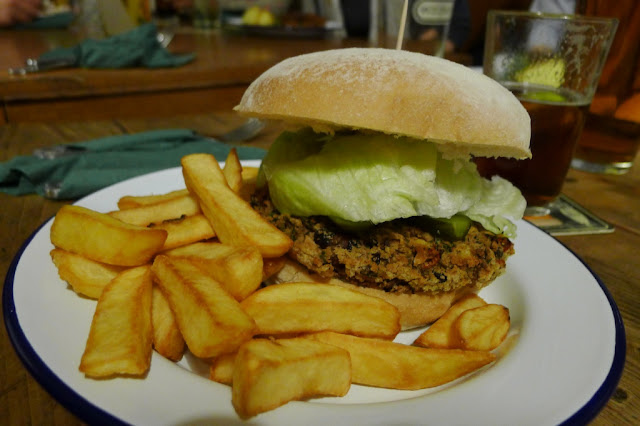 A friend’s ham, egg and chips (£7) was good apart from the chips and wobbly fat. 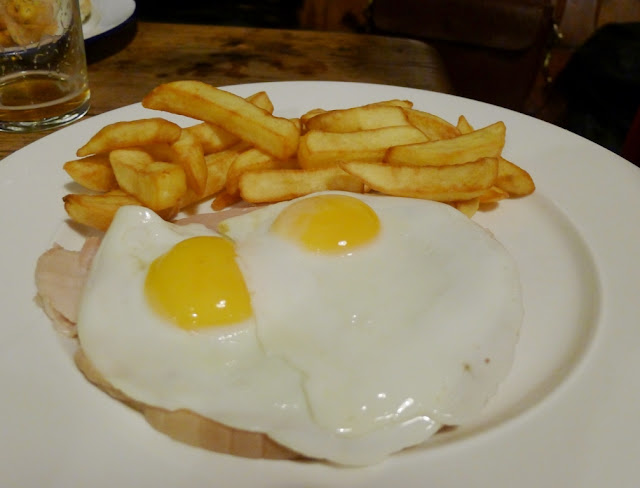 A sturdy pie served with mash, peas and gravy was described as enjoyable (£7). So too was a plate of ribs, chips and salad (£7). 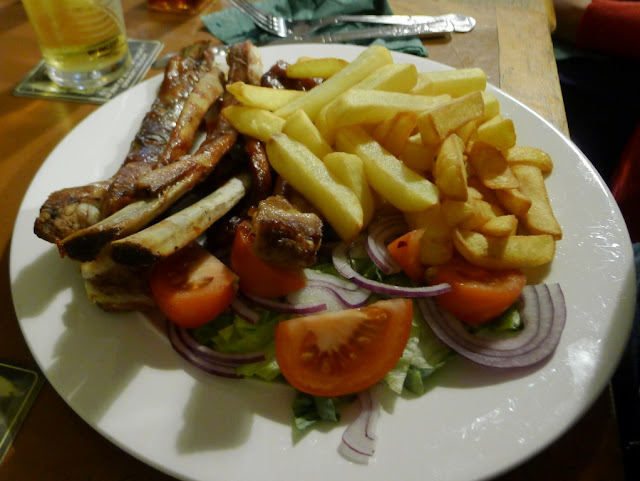 Unlike the mains, desserts were superb.

Sticky toffee pudding (£3.50) was soft, moist and rich with dark sugar. It was served with smooth custard. 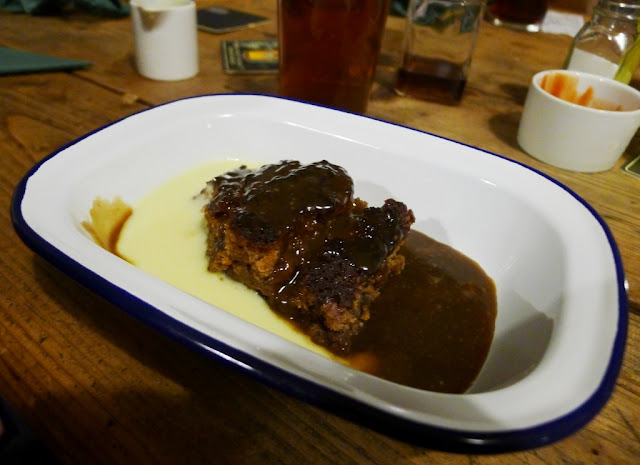 Vanilla cheesecake was wonderfully smooth and creamy, had an excellent crisp base and was accompanied by a sharp berry coulis. 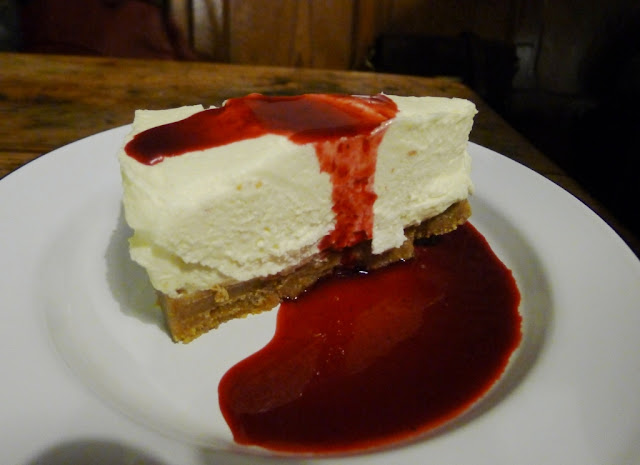 Whilst the food at The Lansdowne is a well-priced accompaniment to a few pints, I wouldn't make a special trip for a meal. However, if the food matched the standards of the beer and venue, they’d be onto a winner.