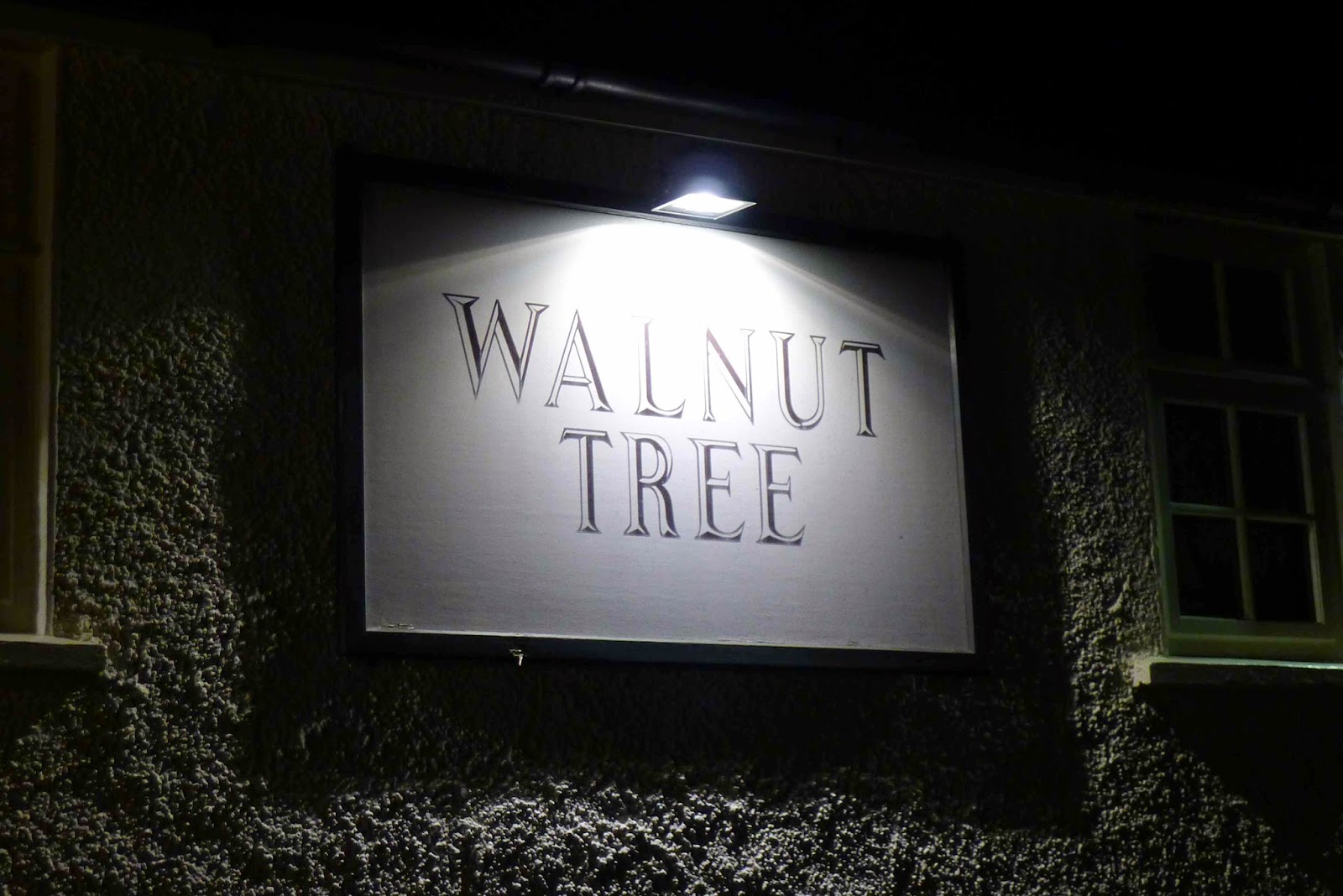 There’s one restaurant above all others which holds a special place in my heart. You see, almost exactly five years ago, Mrs G and I got engaged at The Walnut Tree in Abergavenny.

It was a canny plan on my part – it means that whenever Mrs G and I have a special anniversary I’ll get to visit one of the best restaurants in the UK.

There’s often a lot talk bemoaning Cardiff’s lack of a Michelin-starred restaurant. But, let’s not forget that 45 minutes up the road is one of the country’s very best. 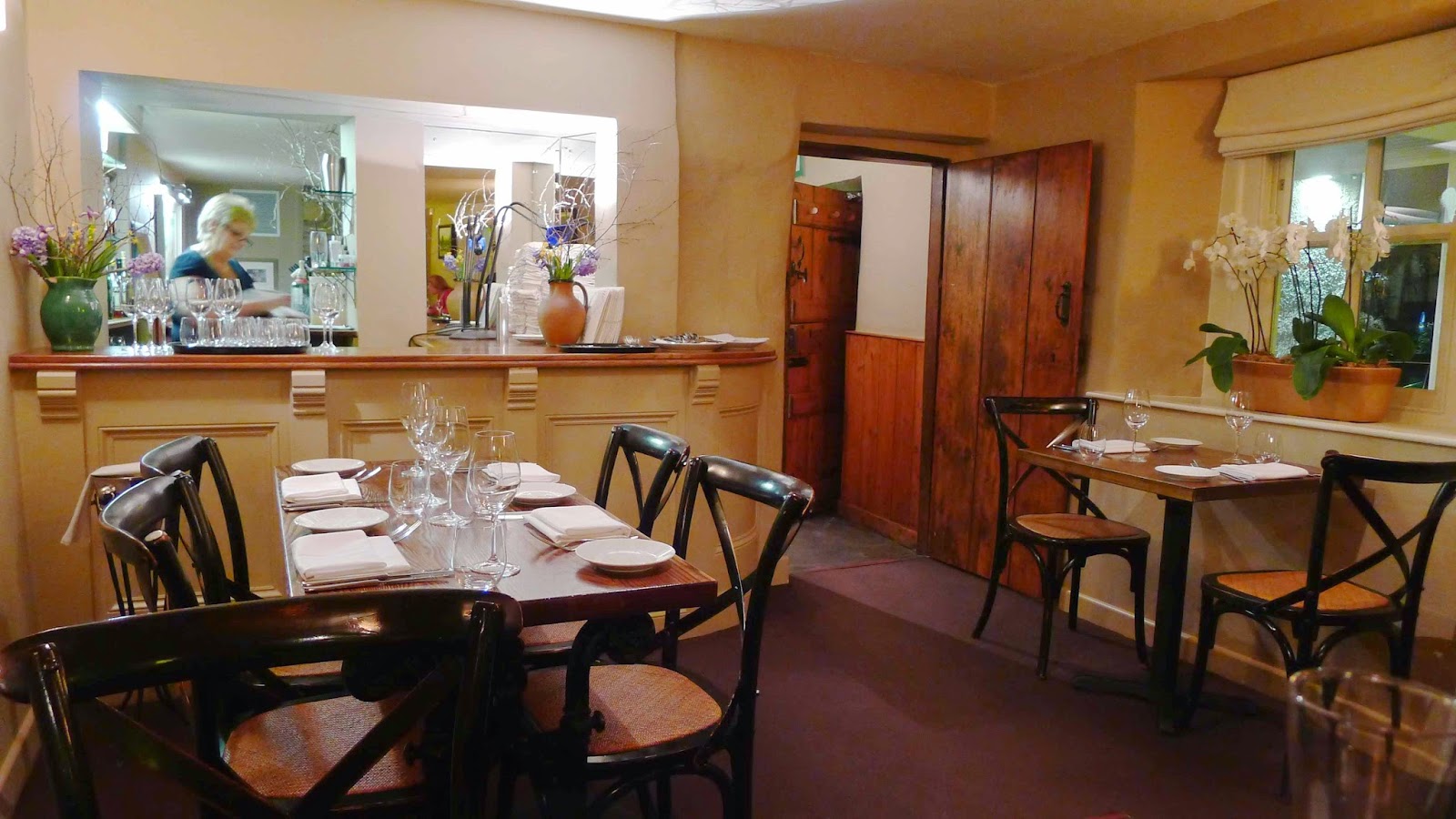 One of the elder statesmen and big personalities of British cooking, Head Chef and Owner Shaun Hill, has been cooking in some of Britain’s best-known kitchens for a staggering 43 years.

Bold flavours, unglamorous ingredients and straightforward presentation combine in his menu of modern classics. There’s not the slightest hint of a foam, smear or gel.

The dining room meanwhile feels like the local pub; it buzzes with jovial conversation instead of the occasional hushed whisper. And the serving team are warm, knowledgeable and down to earth - no one will look down their nose at you if you don't have the foggiest what jabron potatoes are.

An amuse bouche of a mini sausage roll summed The Walnut Tree up in one mouthful. Warm golden pastry and herby sausage meat were topped with a dollop of tangy homemade brown sauce. 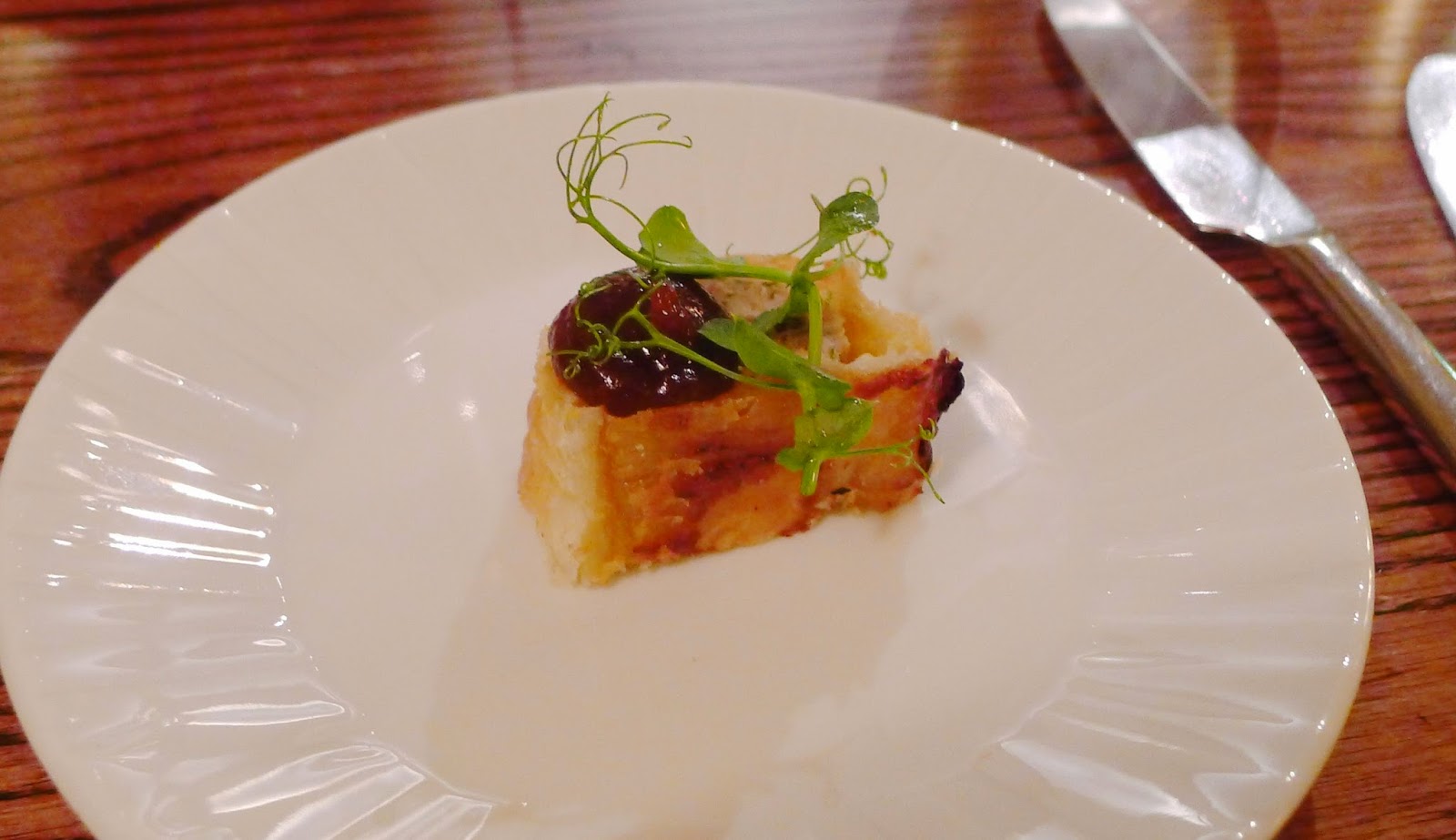 Warm bread, a golden granary loaf and a crusty soft brioche, were both delightful. 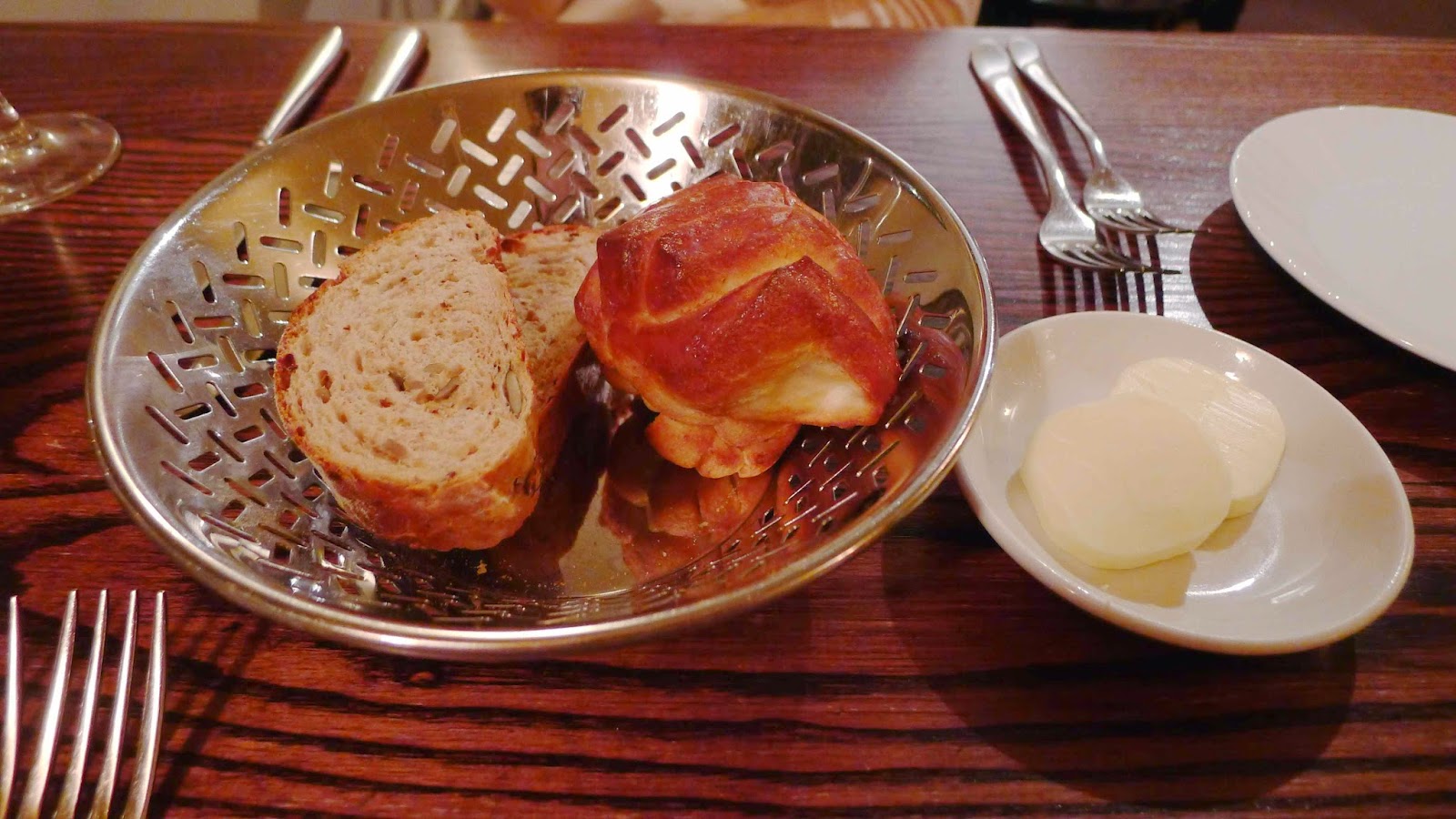 Neither of our starters were as we envisioned from their menu descriptions. Thankfully, they were both still lush.

A pheasant pudding with sage and bacon (£10) was unlike anything I’ve ever eaten. Essentially a hot, set pheasant mousse, it contained a hidden filling of wild mushrooms and was topped with a rich meaty jus, deep-fried sage leaves and nuggets of crisp bacon. 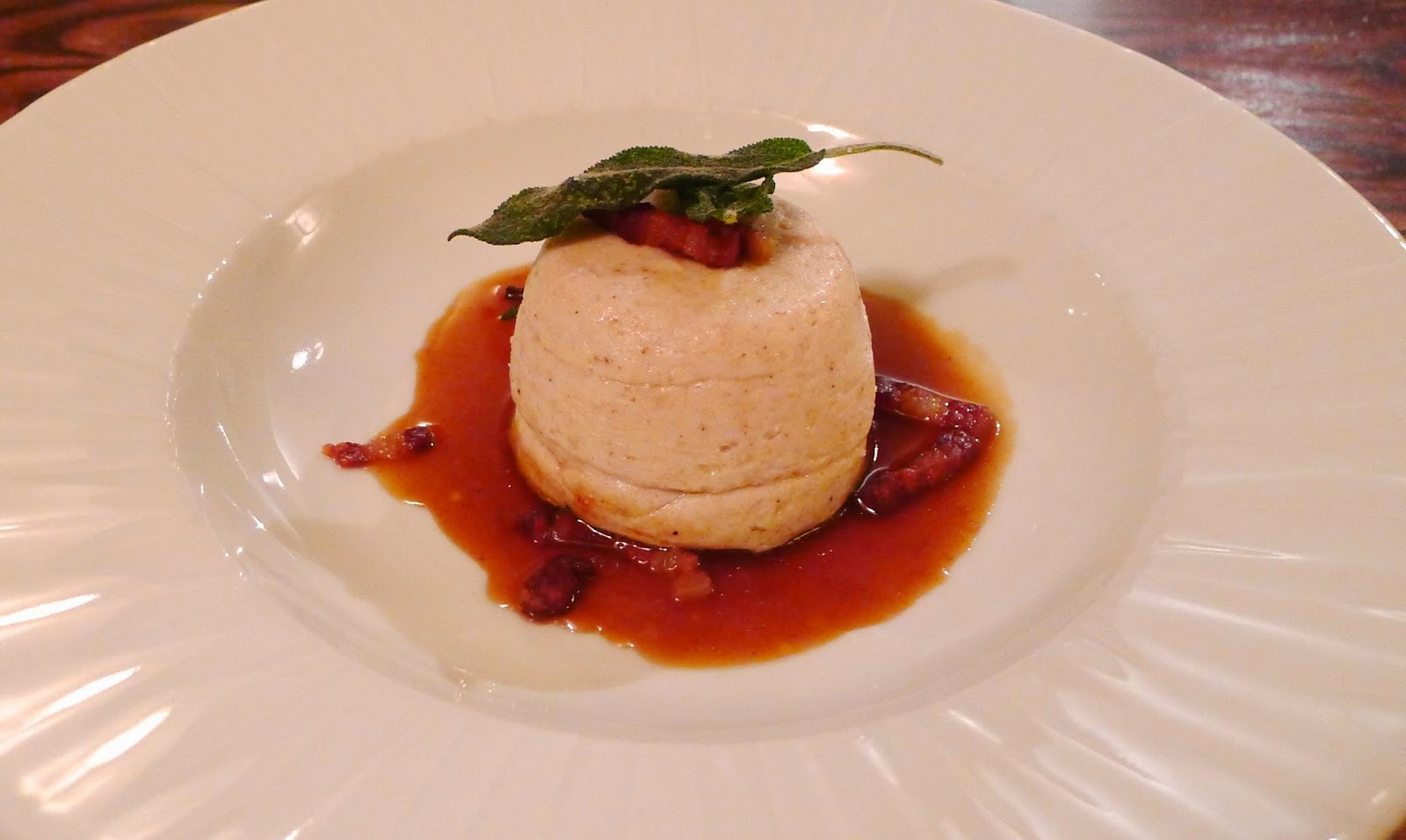 Mrs G’s starter of monkfish and cucumber (£13) was a perfectly wintry fish dish – a trio of fillets were bathed in a cream sauce of intense cucumberiness (is that a word?) with a mild mustard hint. 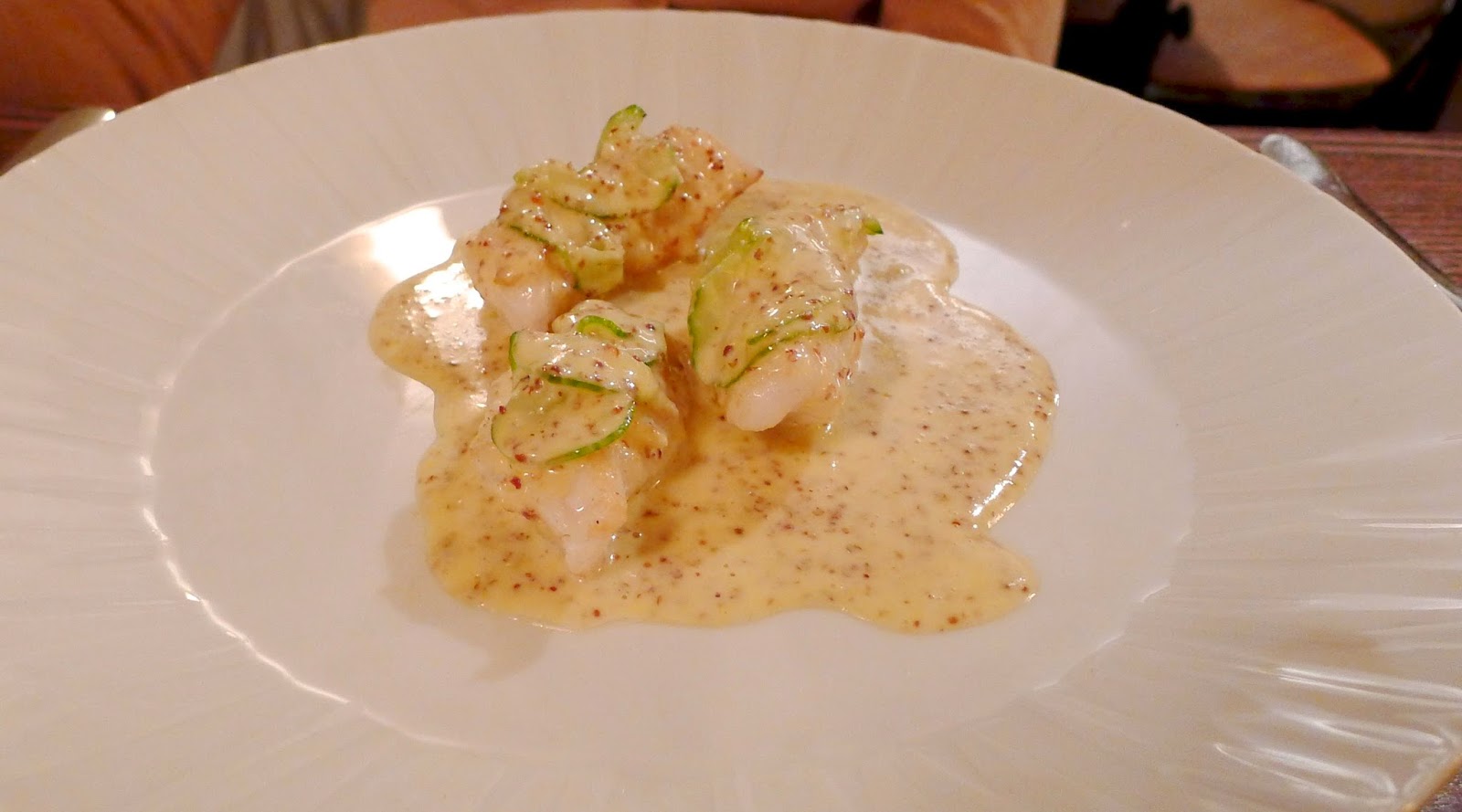 Mains were a pair of the most memorable dishes I’ve eaten in a long time.

Tender loin, unctuous belly, yielding cheek, intense black pudding atop a fried potato cake, buttery cabbage and sticky pork-flecked Boston beans made for a near flawless plate of food. The only imperfection was a slightly anaemic and under-seasoned piece of crackling. 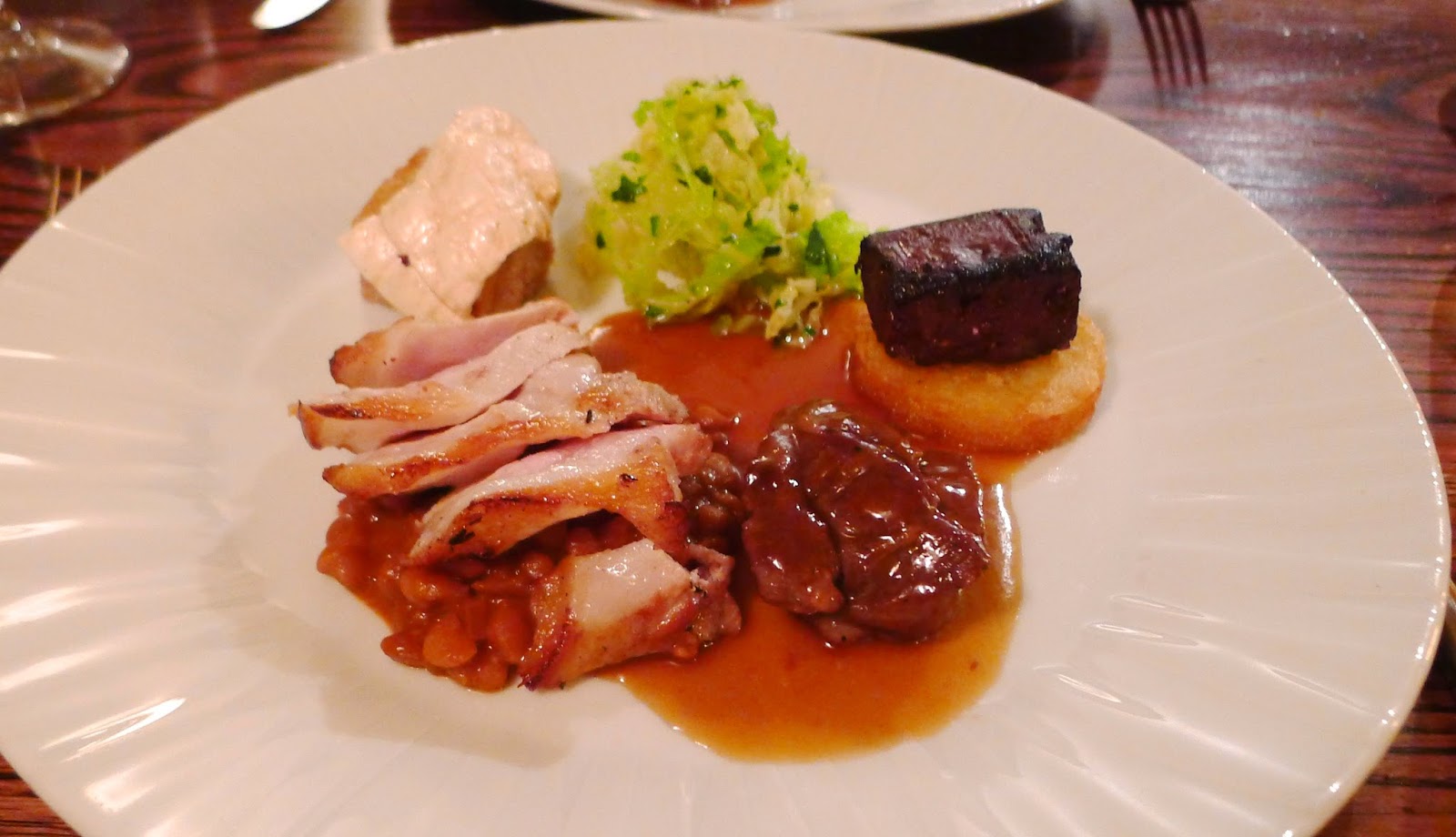 A generous pile of meat (tender pieces of loin and deeper flavoured pieces of slow-cooked cheaper cuts) was muddled together in a glistening sauce. Accompaniments of buttered kale and carrots and golden-crusted gnocchi baked with tangy goats cheese were the ideal match. 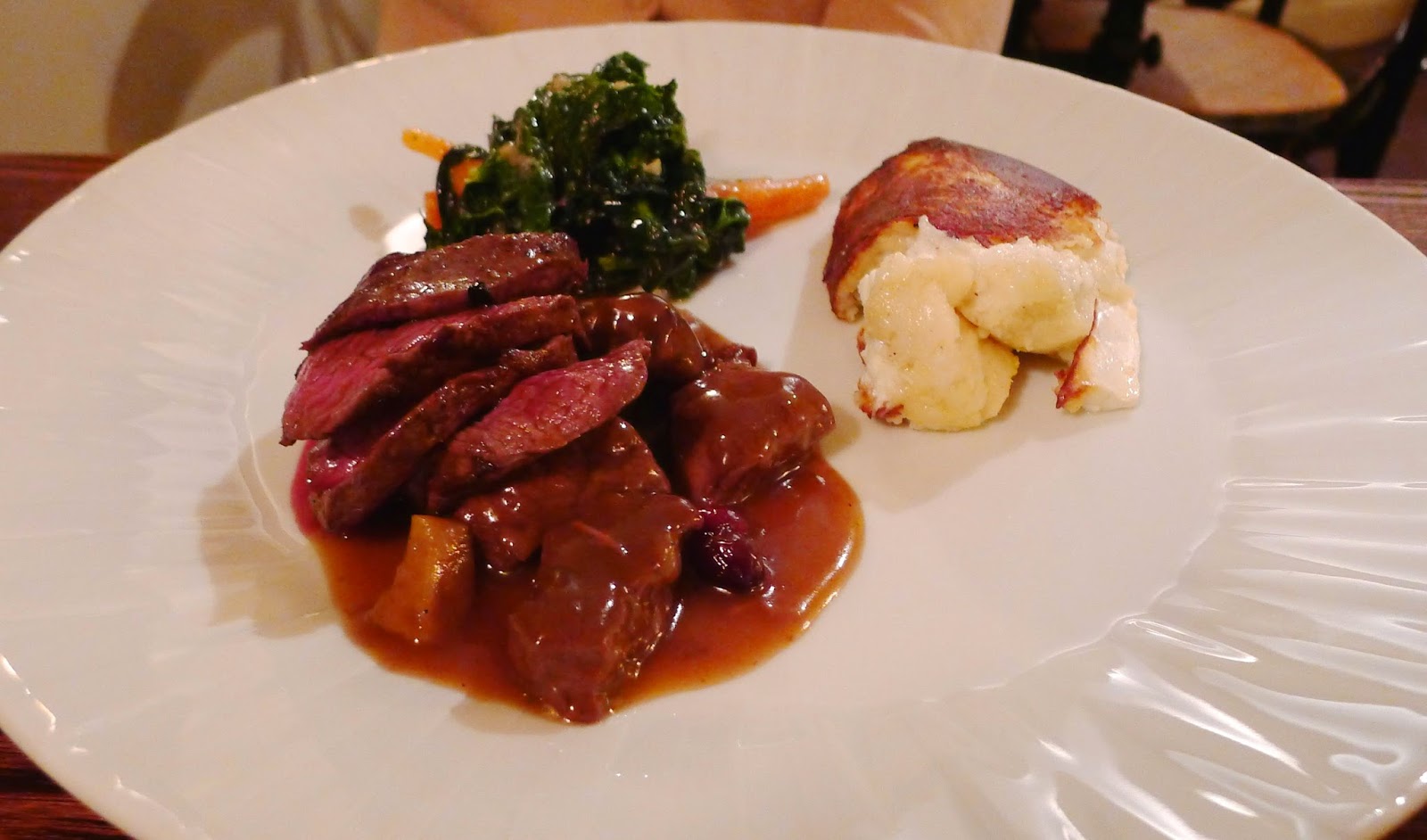 Having swatted up on dauphine potatoes (£4) before my visit, I couldn’t resist ordering a bowl for the table. I’m not sure a potato has ever been treated with such care. A bronzed, hyper-crisp exterior gave way to an ultra-smooth mashed potato and choux pastry filling. Swoon. 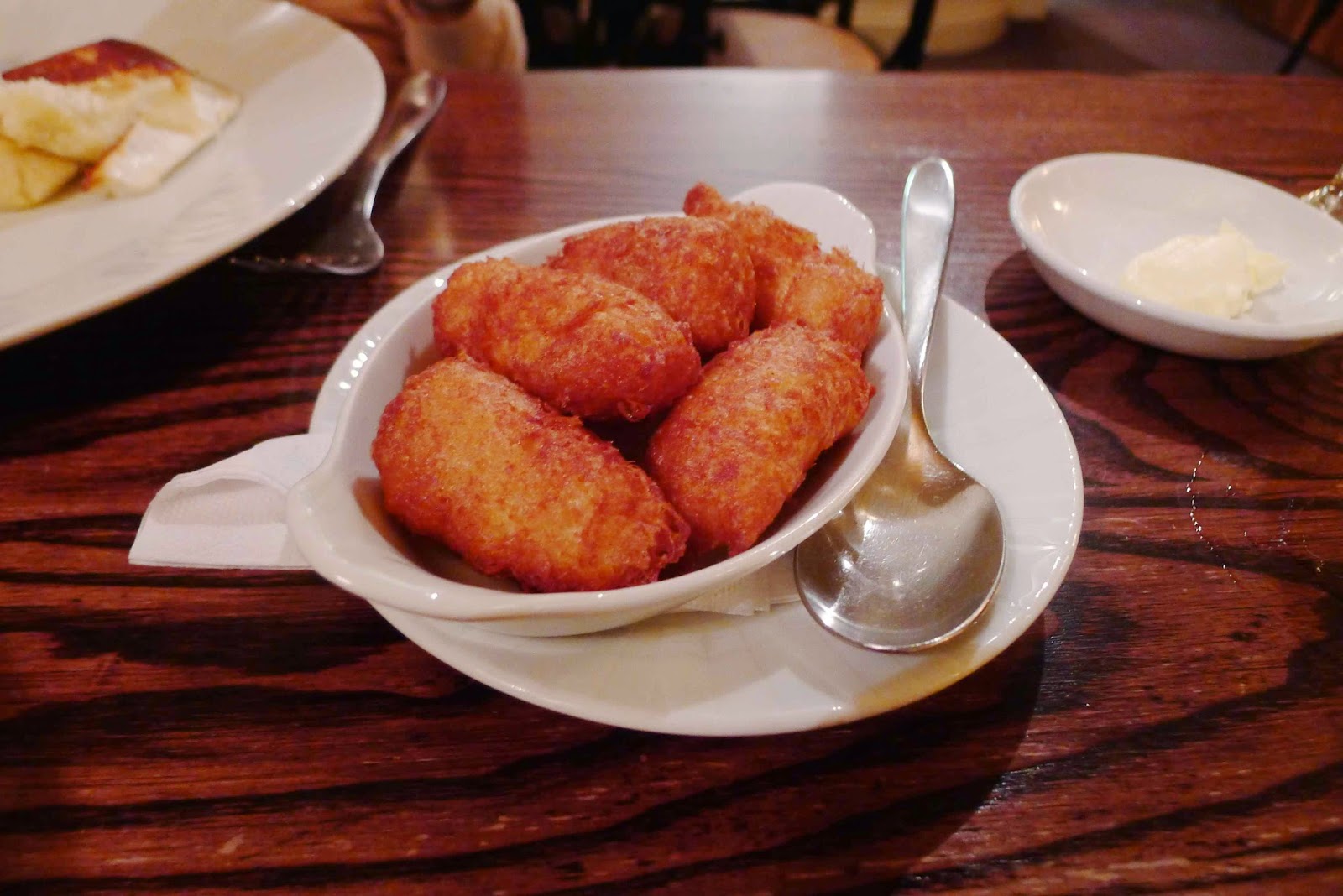 Resisting the temptation to order a second portion of potatoes, we moved onto dessert.

A white chocolate and rum torte (£9) was so much more than it’s menu description. A delicate, crisp chocolate base was topped with a not too sweet, not too boozy and not too creamy white chocolate mousse, chocolate sponge, another layer of mousse and then studded with dainty pieces of raspberry.

It was served with a phenomenally smooth, rich and yet palette cleansing dark chocolate sorbet. 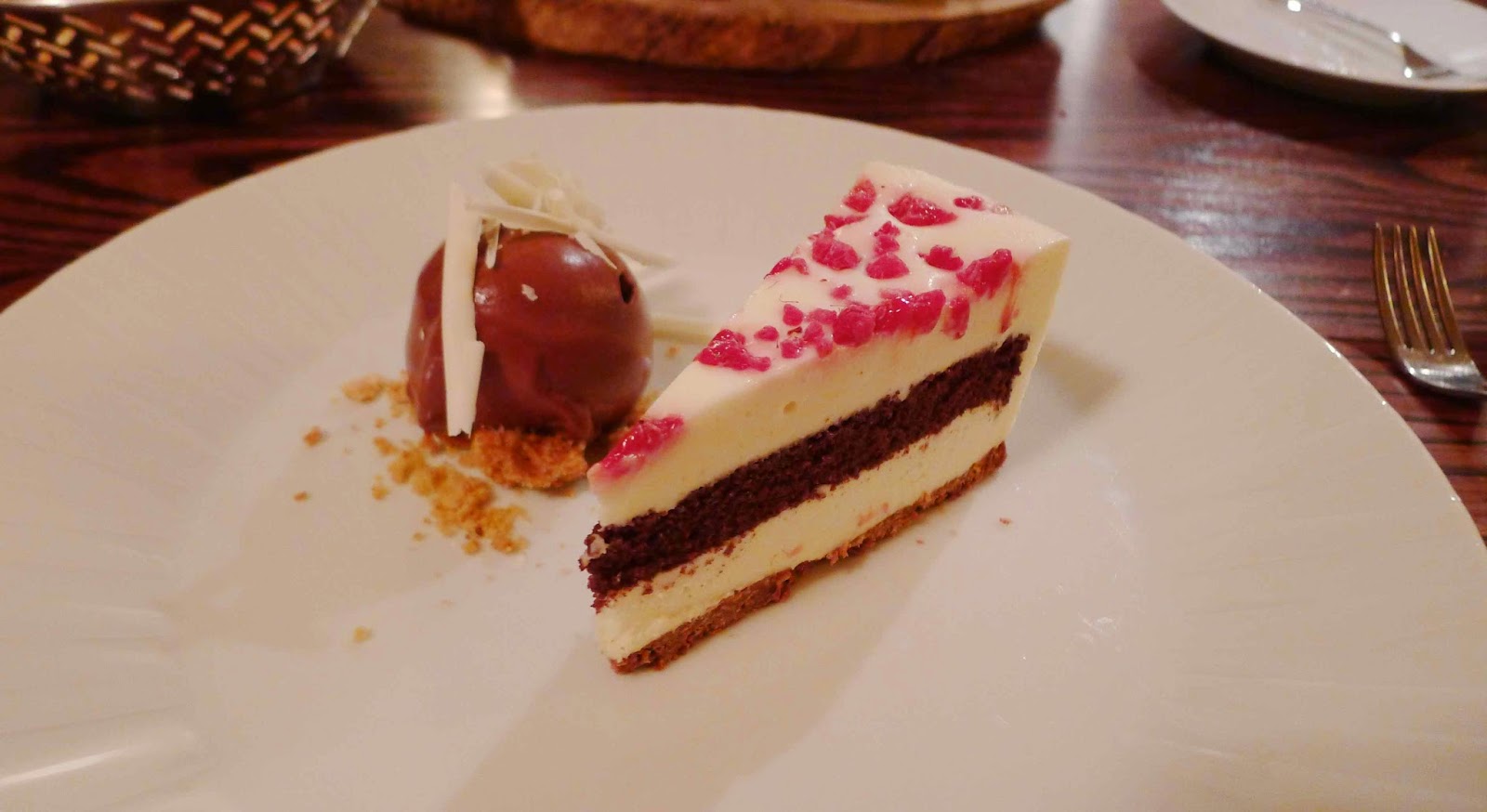 A groaning plank of British cheeses (£12) was a who’s who of Britain’s finest. Brie-like Wigmore, vegetal Montgomery, tangy Bosworth Ash, firm and socky Nuns of Caen and my all-time favourite, salty and savoury Stichelton. A lightly-dressed salad scattered with walnuts broke up the richness whilst nestled amongst the fine selection of crackers were a clutch of McVitie’s Digestives – another sign of the Walnut Tree’s lack of pretension. 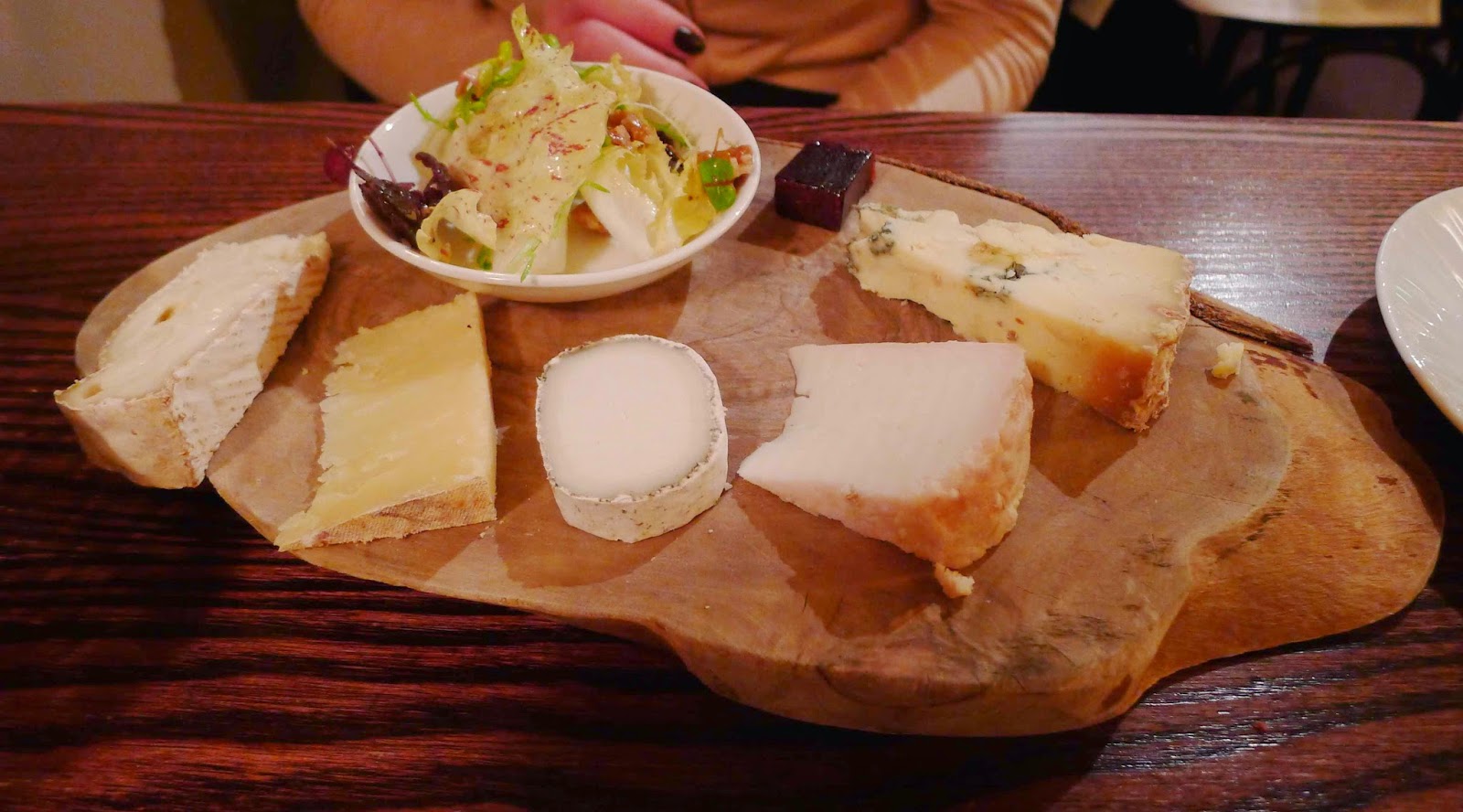 We rounded off the meal with peppermint tea (£4.50) and a pair of perfect petit fours. A cube of fudge was made using all the cream whilst a coconut bite was the ultimate mini bounty – a thick chocolate case surrounding a buttery smooth coconut filling. 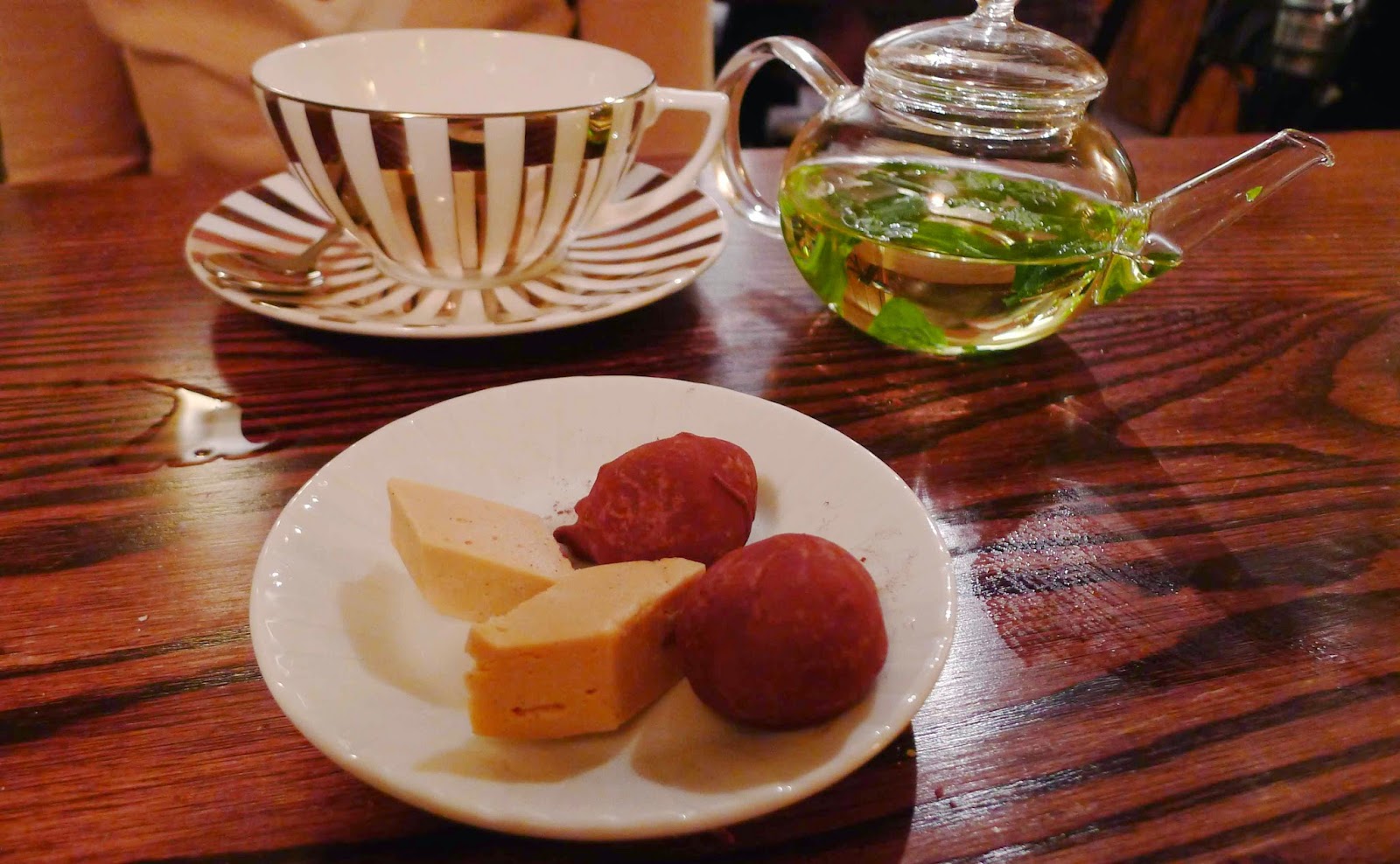 If you haven’t made a pilgrimage to The Walnut Tree then add it to your to do list for 2015.