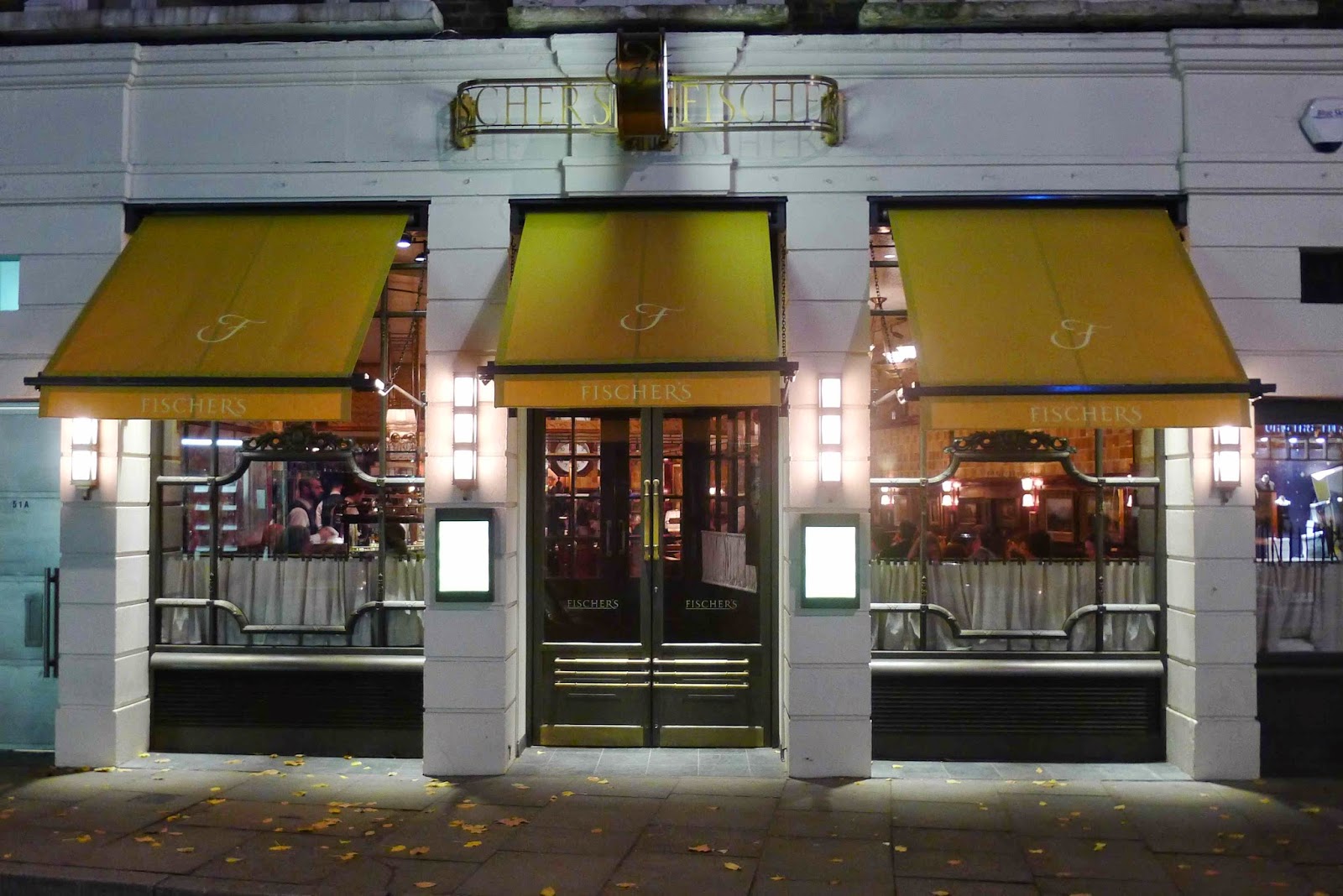 There are some restaurants worth visiting for the atmosphere alone.

Fischer’s in Marylebone is one of them.

The dining room is stunning - a mock-up of a grand Viennese konditorei with imposing railway clocks, old-fashioned portraiture and a stuffed animal menagerie all forming part of the set.

In fact, eating dinner at Fischer’s is like being in a Wes Anderson film i.e. my idea of fun. 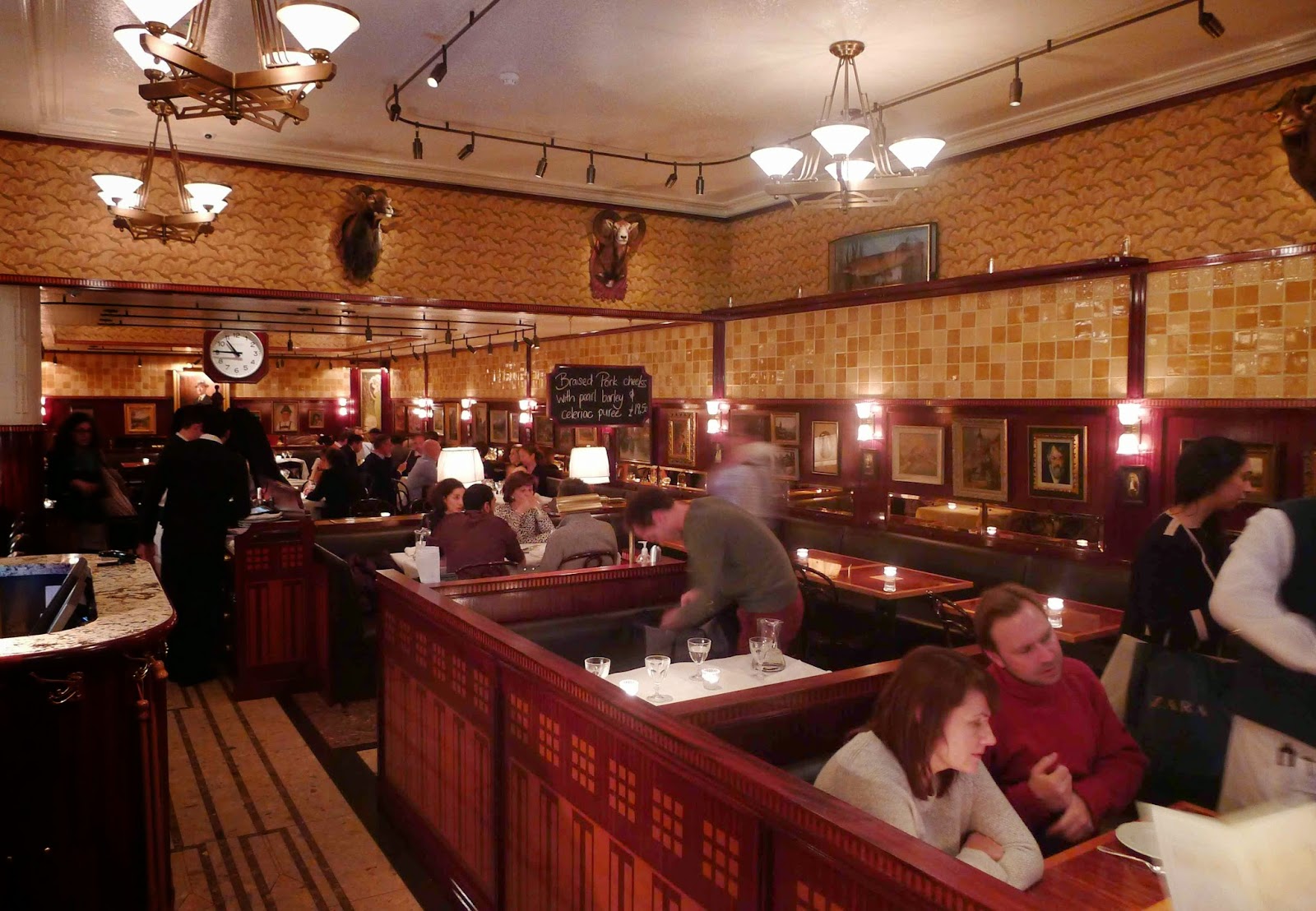 Service was impeccable too (I’d expect no less from Corbin and King, the blokes behind The Wolseley) – stylish, unobtrusive and warm, the waiting team didn’t put a foot wrong. When our waiter detected an undertone that my friend wasn’t too impressed with his main course – the option of a replacement was offered in a flash.

Whilst the decor is the epitome of central European grandeur, so too is the menu. Wursts, schnitzels, kuchens and tortes are found alles uber der platz.

Top notch crusty bread and whipped butter kicked things off on a good note. However, the £7 dinner cover charge which appeared on the bill was a sucker punch.

Starters were all enjoyed. Meaty smoked salmon (£9.25) was served with a quenelle of punchy horseradish cream and Nordic bread. 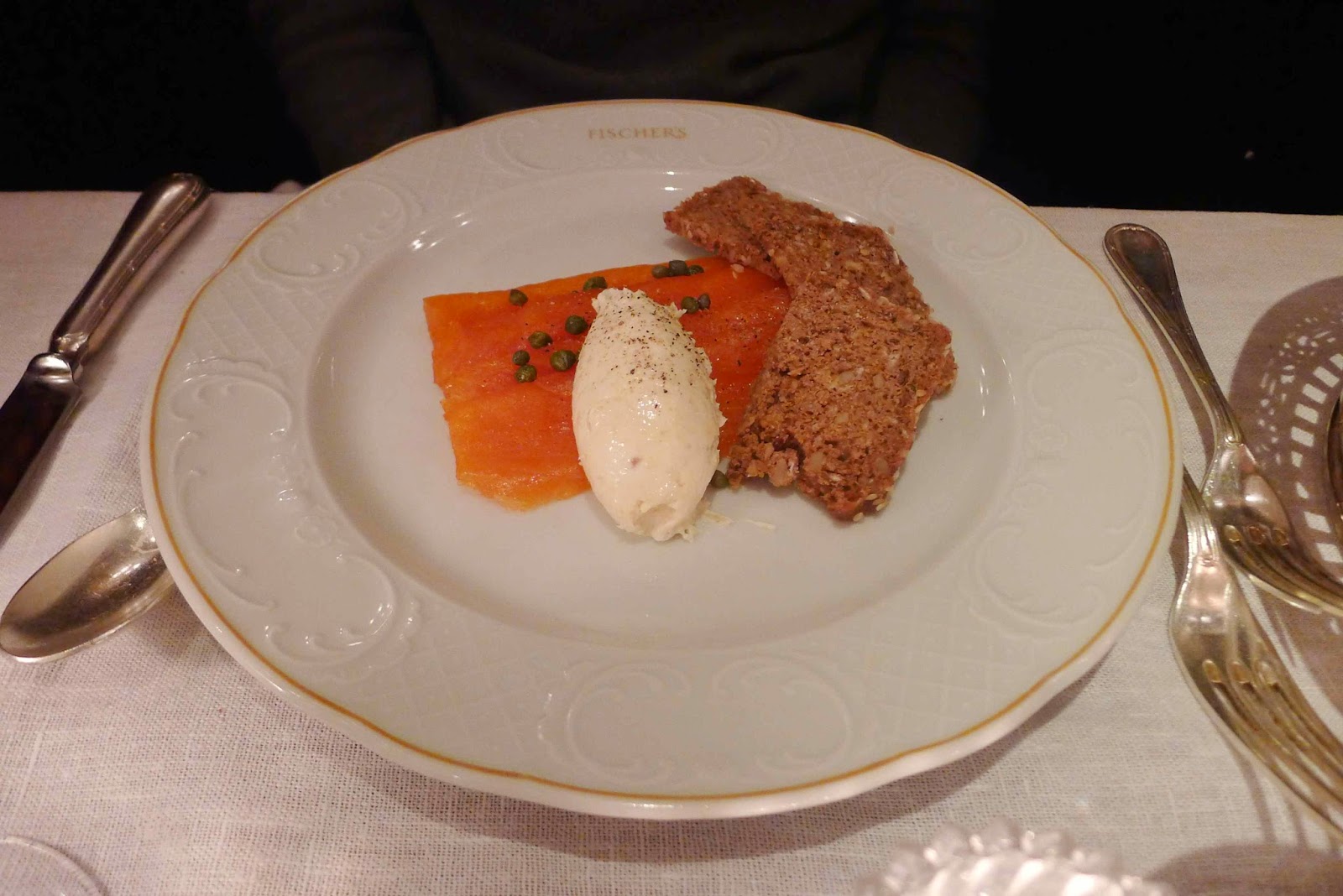 An unappetising looking log of sweet mustard cured herring (£7.50) made up for its appearance in taste – tender and sweet it was a great example of its type. 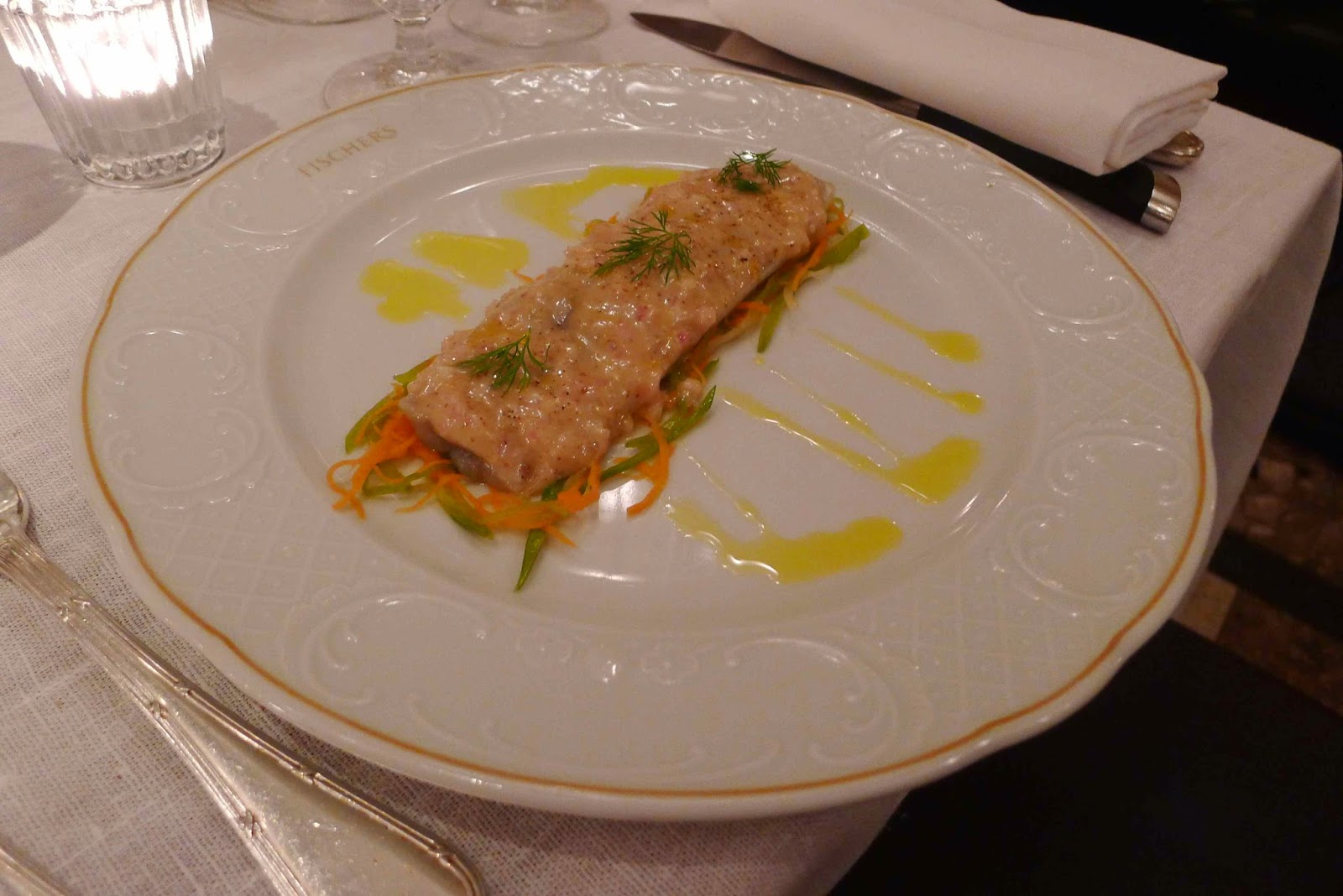 The winner of the round however was a glorious dish of käsespätzle with bacon (£6.50). Essentially an Austrian take on macaroni cheese, the little noodles were enveloped in velvety cheese sauce and laced with nuggets of crisp bacon. 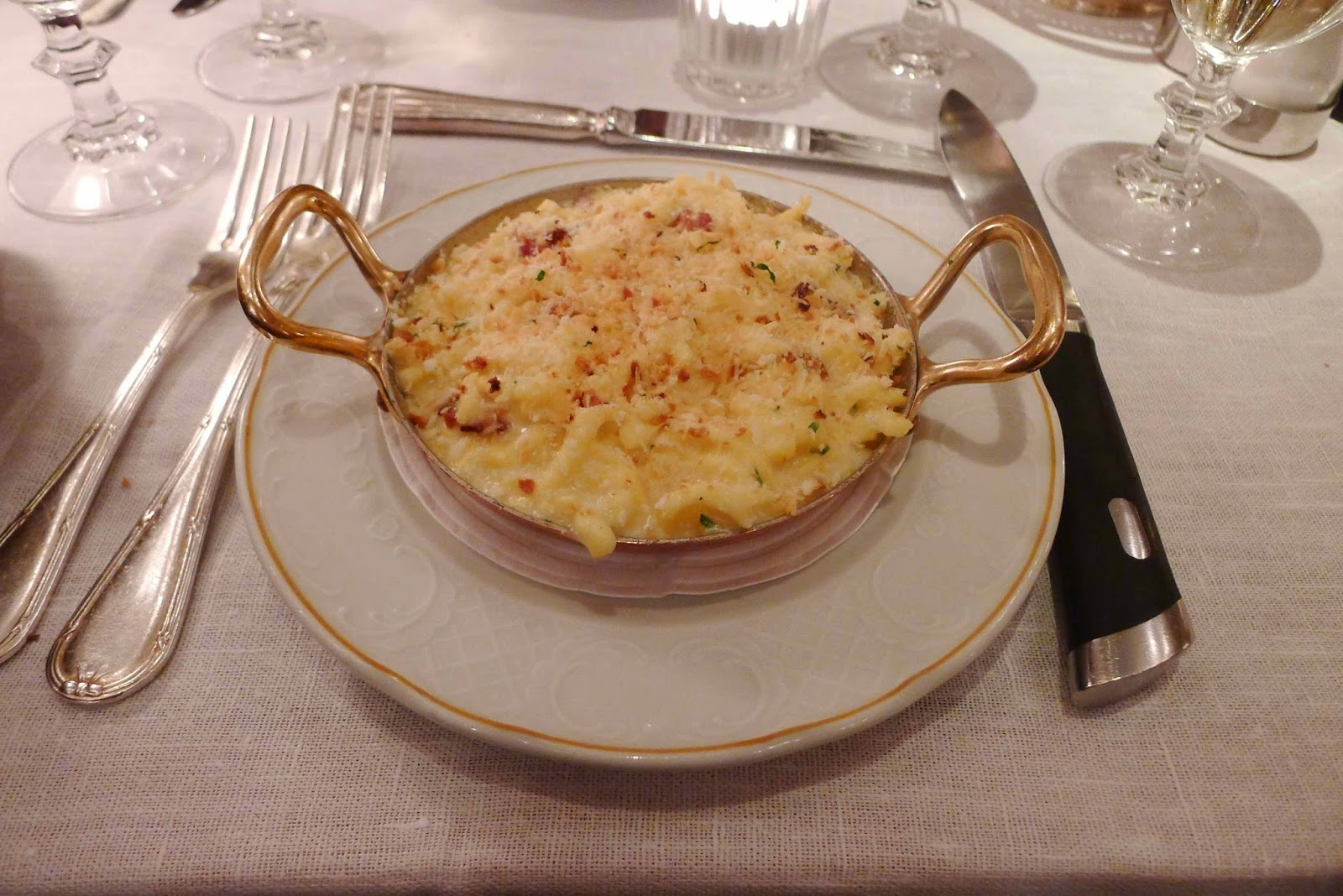 Onto mains where there were a few glitches.

A chicken schnitzel (£14.50) was crisp, tender and impressively overhung the edge of the plate. However, save for the muslin wrapped lemon and demi-glace covering the bottom of the plate, there were no other accompaniments. 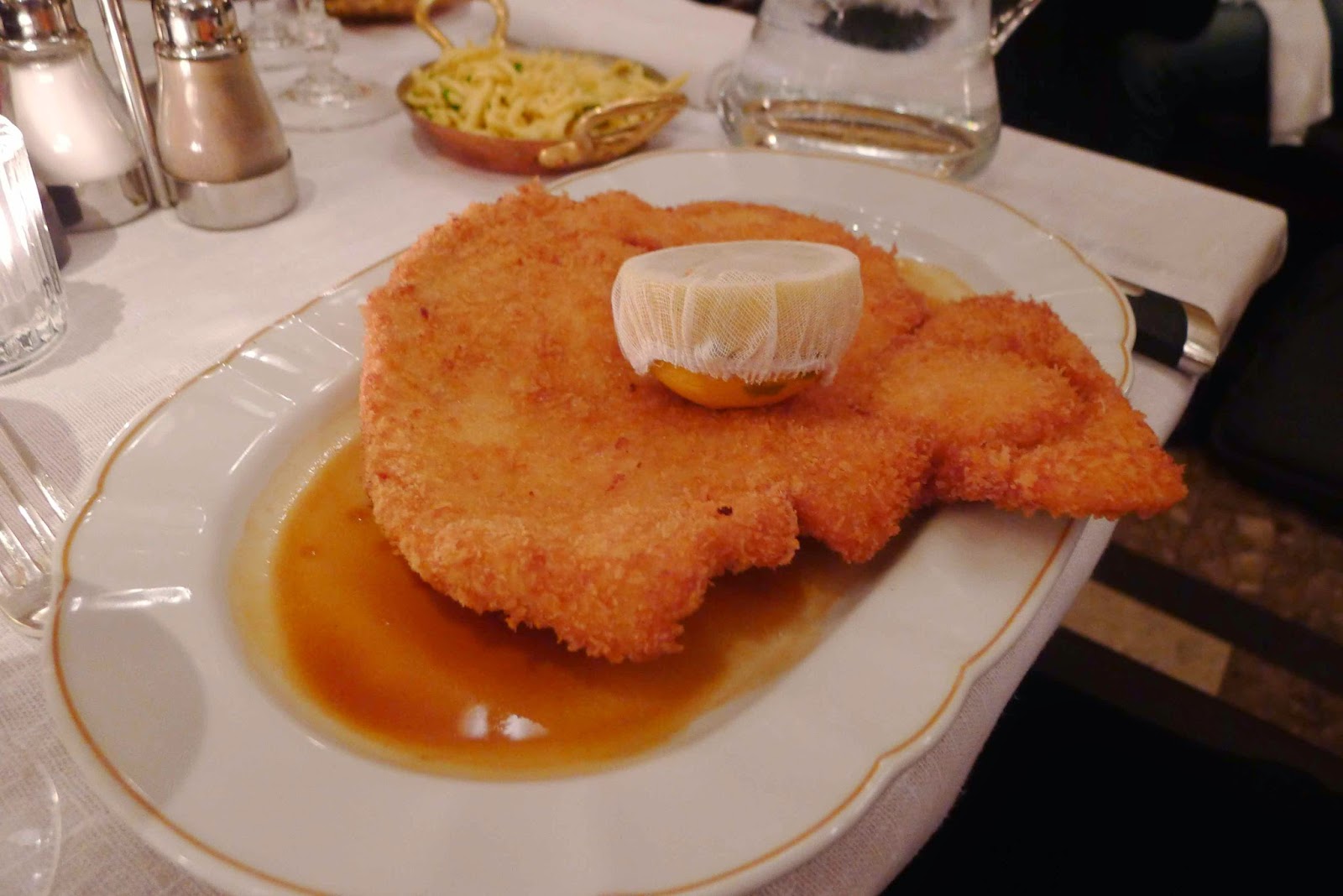 Therefore a side of spätzle (£3), sauerkraut (£3.50) and honey-glazed parsnips (£3.75) were well needed to break up the dish’s monotony. A special mention should go out to the parsnips – covered in what seemed like a whole jar of honey, they were wickedly sweet and sticky. 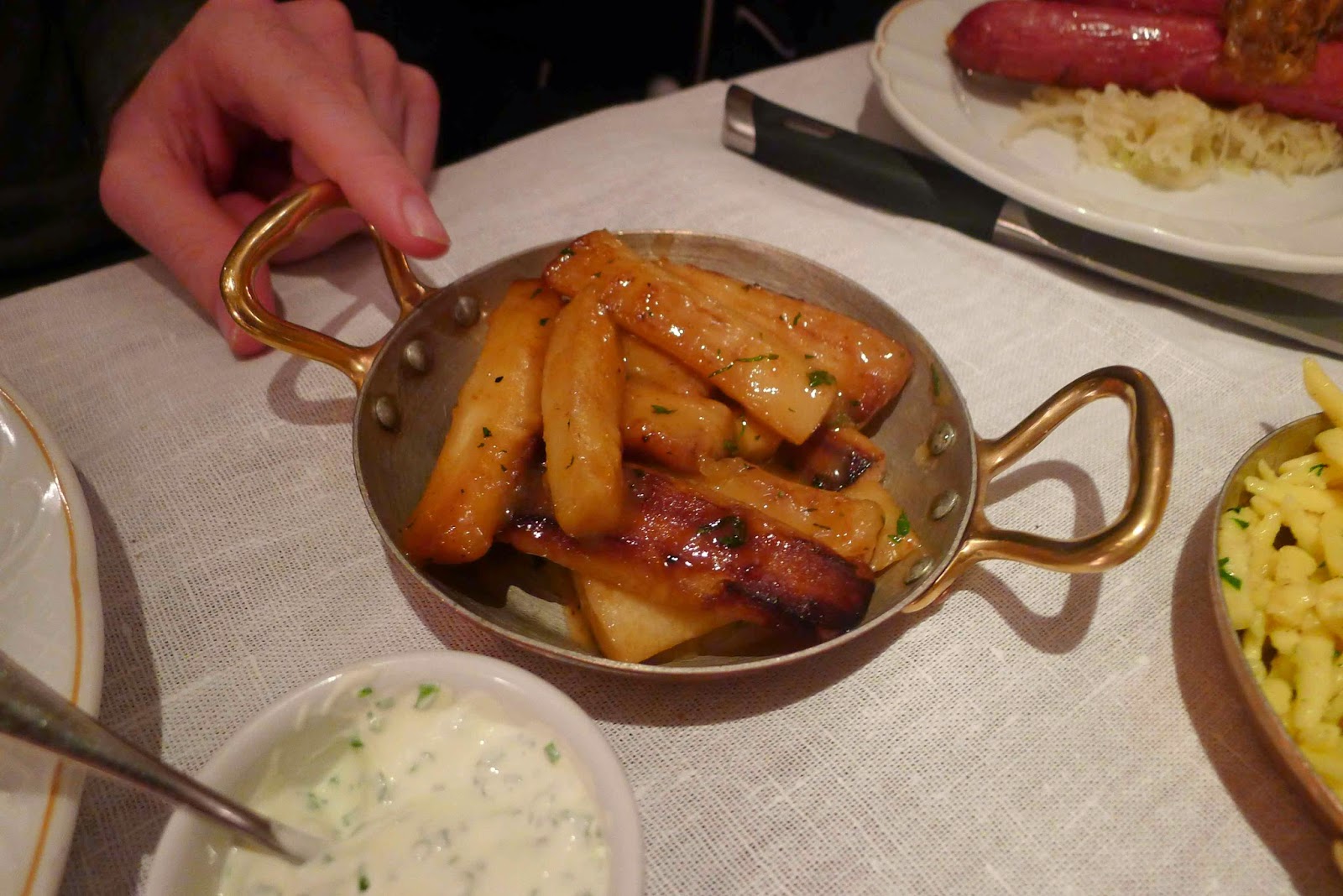 A functional lamb goulash (£18) disappointed. A handful of pieces of well-flavoured lamb, tender potatoes and mixed peppers sat in a paprika-laced broth. There's no doubt it was a tasty plate but such was its simplicity it felt like a dish from the office canteen and at £18 overpriced. 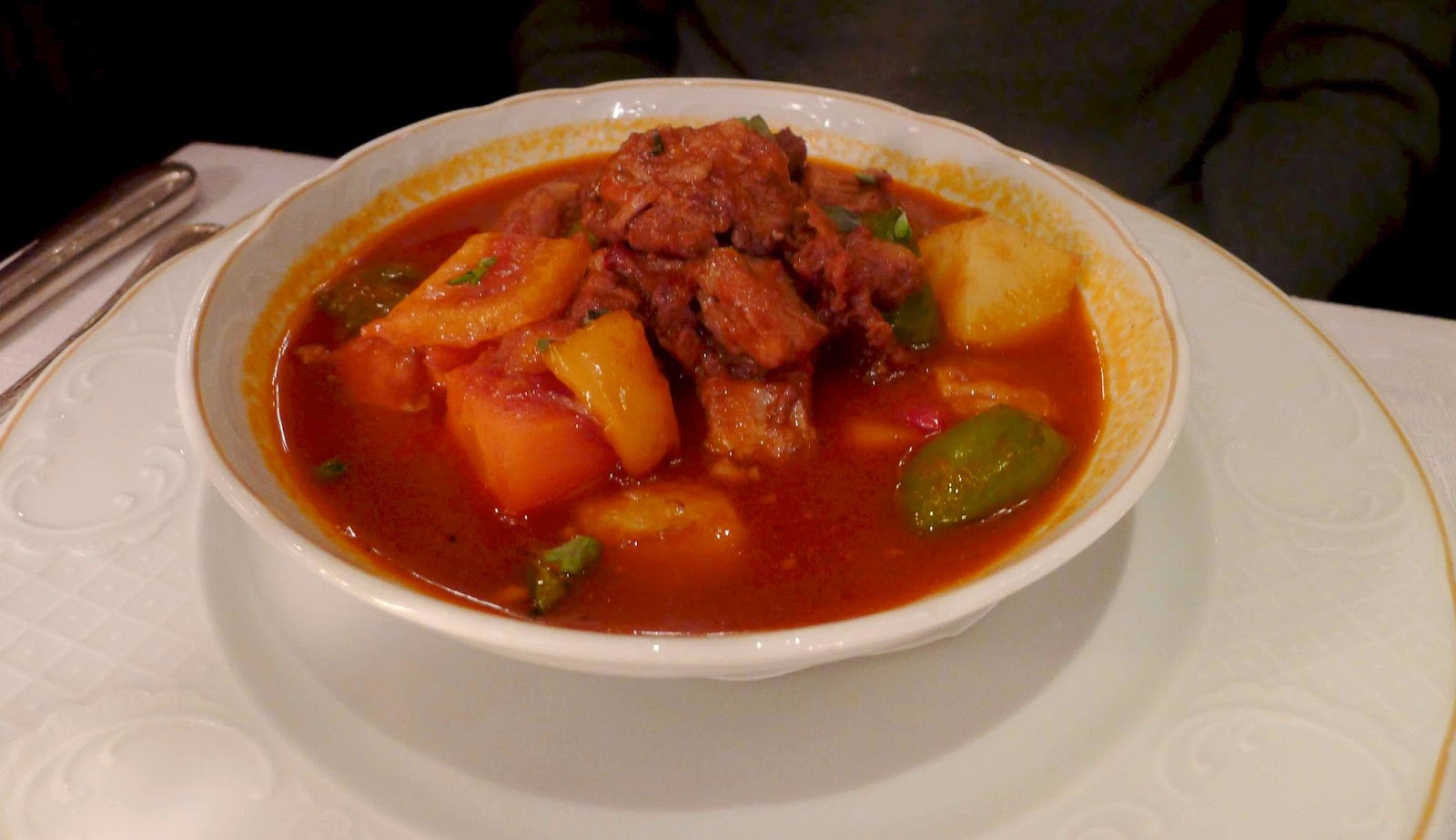 The würstchen were the best - Fischer’s have an enviable sausage selection. I ordered a marjoram twanged Nürnberger and a Berner Würstel stuffed with oozing emmental and wrapped in crisp bacon (£12.75). Accompanying sauerkraut and mustard-tinged potato salad completed a top notch and well-priced plate of food. 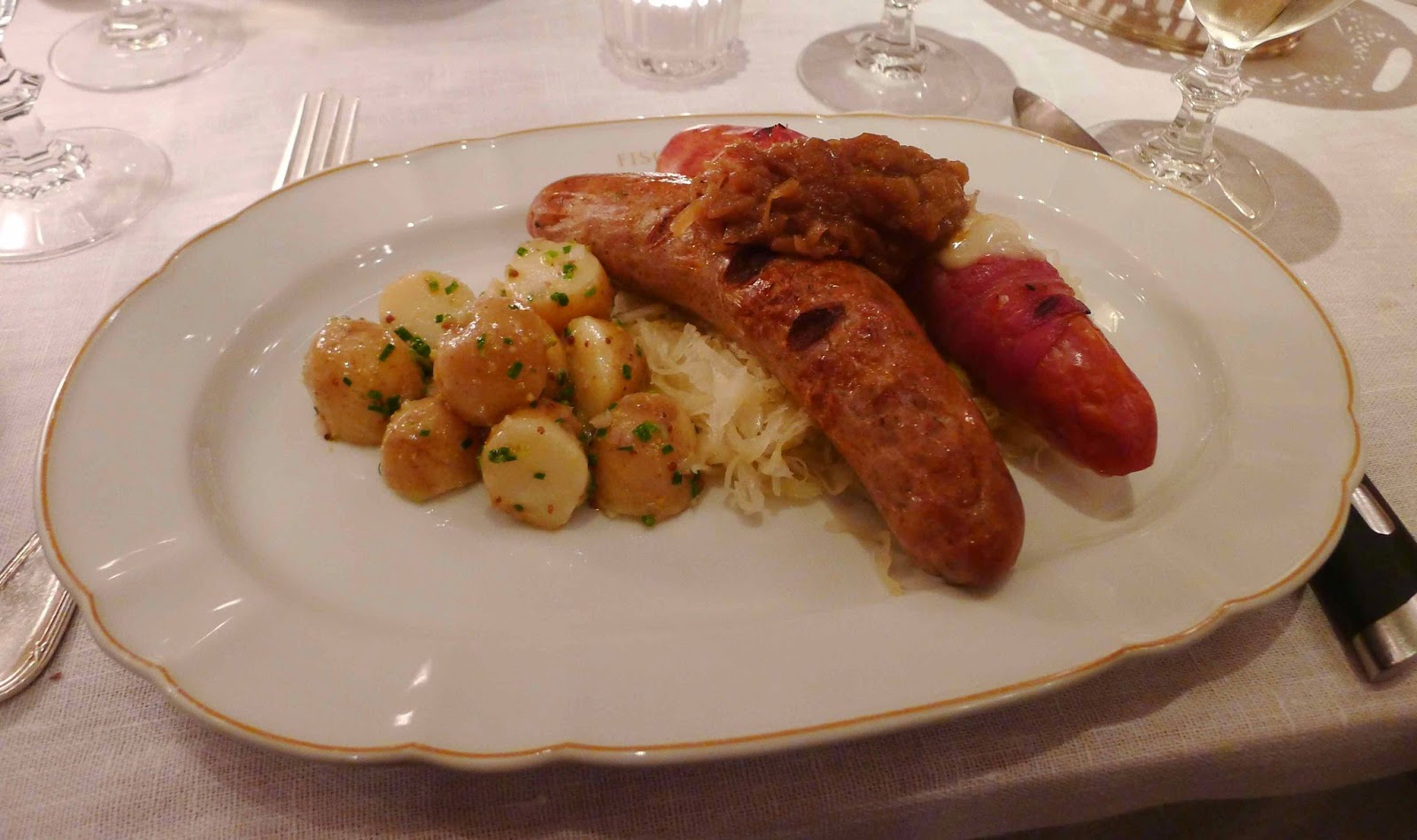 As the only person on the table to order pudding (why am I friends with people who don't order dessert?), I had a difficult choice to make from the exotic sounding selection which included scheiterhaufen, gugelhupf and dobos torte.

I decided on a Bergasse sundae (£7.25) comprised of faultless hazelnut, almond and pistachio ice creams served with a jug of hot butterscotch sauce. Oofh. 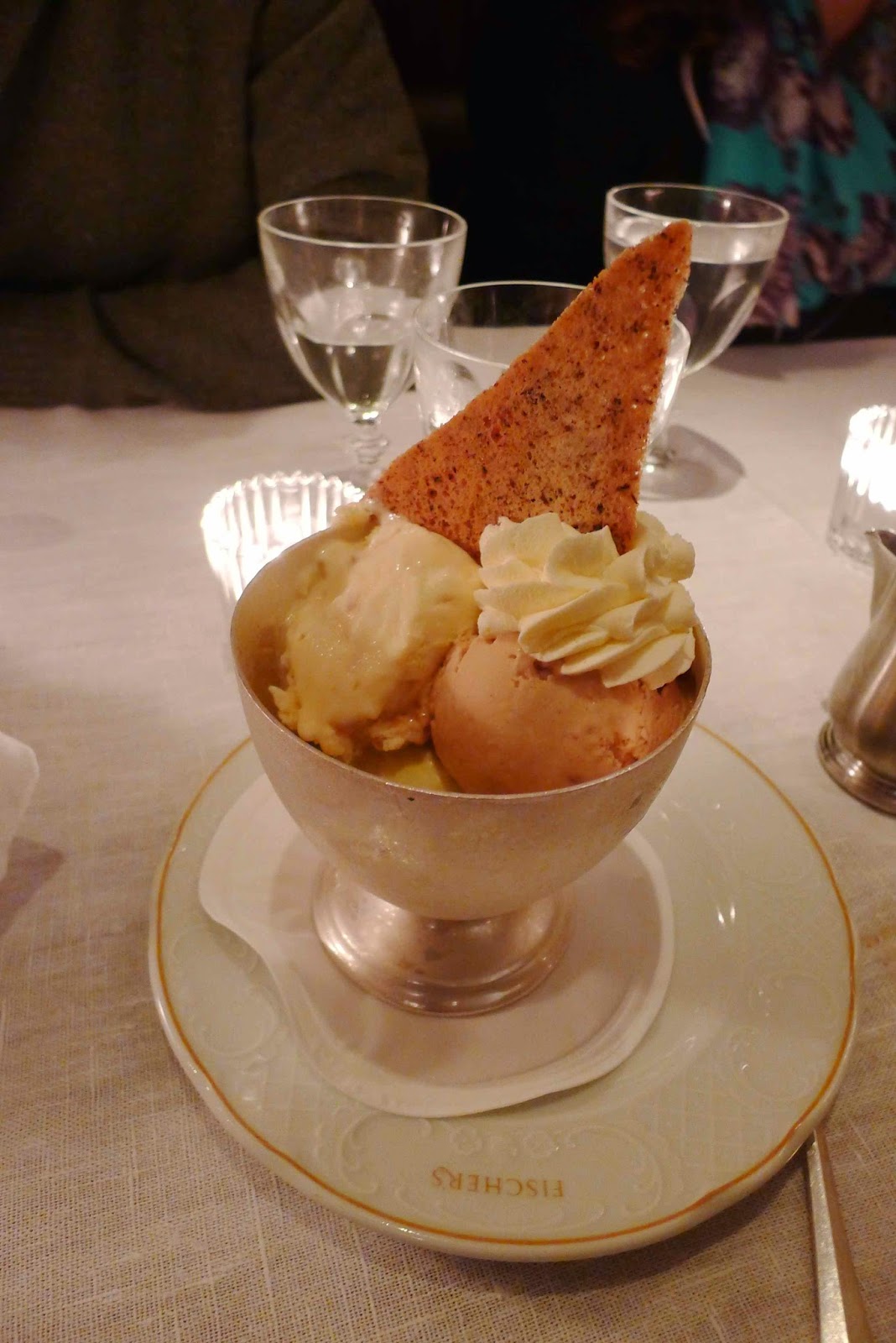 So, all in all a mixed bag – some excellent, some average and some overpriced food. There’s definitely a delicious meal to be had at Fischer’s and there’s plenty more menu I'd like to rootle through.

Most importantly, for anyone who’s wanted to feel like a character from the Grand Budapest Hotel or The Royal Tenenbaums, Fischer’s should be on your to visit list.