A few of the best sandwiches in Cardiff

With 31% of working adults in Great Britain doing their jobs from home, it’s understandable that sandwich shops are having a hard time of it. No longer are office workers queuing in their droves for a jambon beurre baguette or a steak bake whilst on their lunch break. Instead they’ve been usurped by a homemade sarnie and an episode of Bargain Hunt (at least in our house).
In solidarity with Cardiff’s independent sandwich makers, I’ve spent the past few weeks working my way around some of the city’s finest. A few are mainstays of Cardiff’s sandwich scene whilst others are more recent additions.

It would be remiss of me to not mention Fresh Baguette, arguably Cardiff’s finest sandwich maker, which is currently on hiatus. This tiny shop in the Royal Arcade serves up some awesome specials including sweet and spicy crisp-crumbed General Tso’s chicken and their iconic Indian spiced chicken baguette with mango mayo, onion bhajis and toasted cumin seeds. 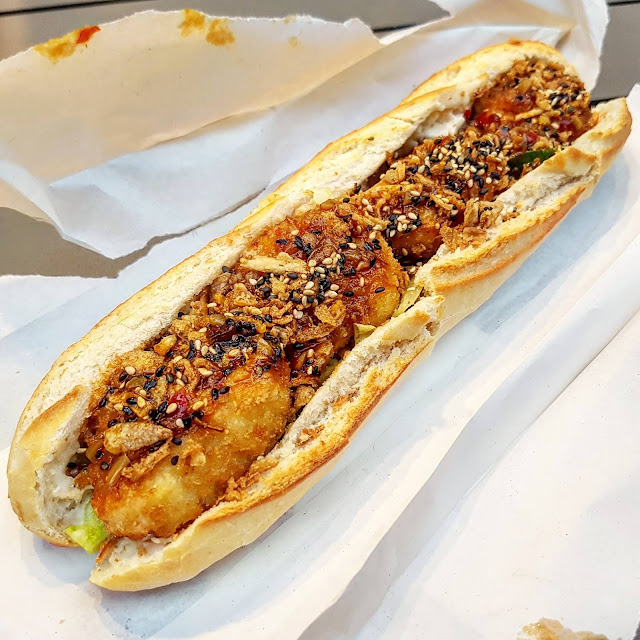 Meanwhile New York Deli, peddlers of mahoosive hoagies, are still open for takeaway and delivery across Cardiff. Hanoi 1991 have also just reopened their doors to serve their fragrant and spicy Vietnamese banh mi. 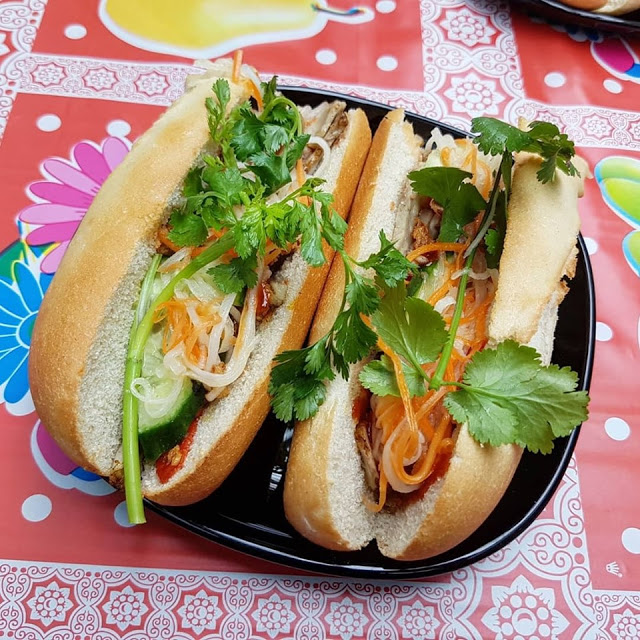 Whenever I visit Mina’s on Albany Road there’s always an eclectic queue of families, workers and very hungover people. Its hard to go wrong with a Mina baguette; they’re always warm out of the oven, laden with filling and good value for money. 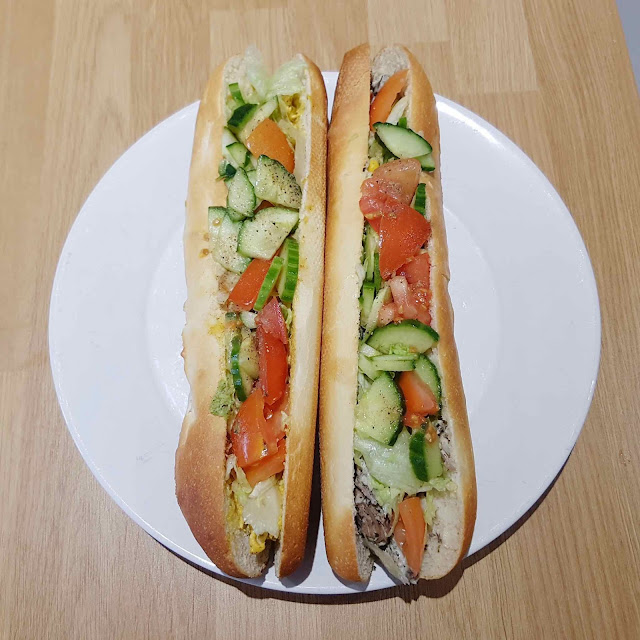 Our perennial orders are coronation chicken (£3), which is well-coated with curry spiced mayo. 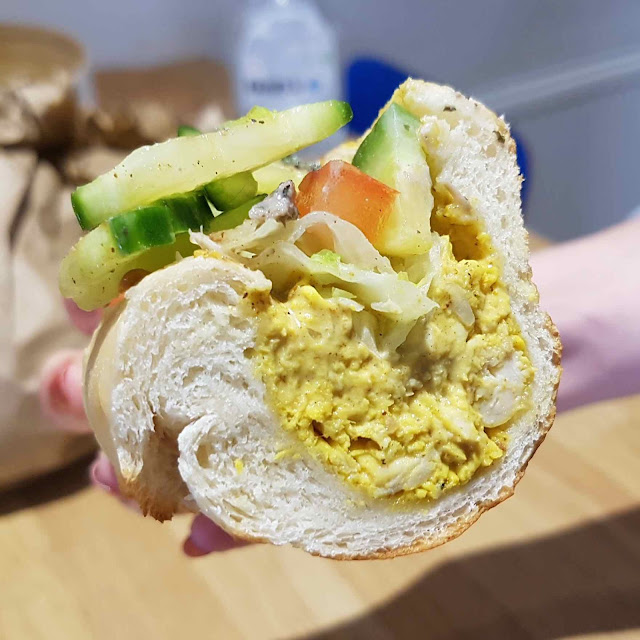 And minted lamb (£4.90), which is packed with shreds of meat in a punchy mint sauce twanged mayo. 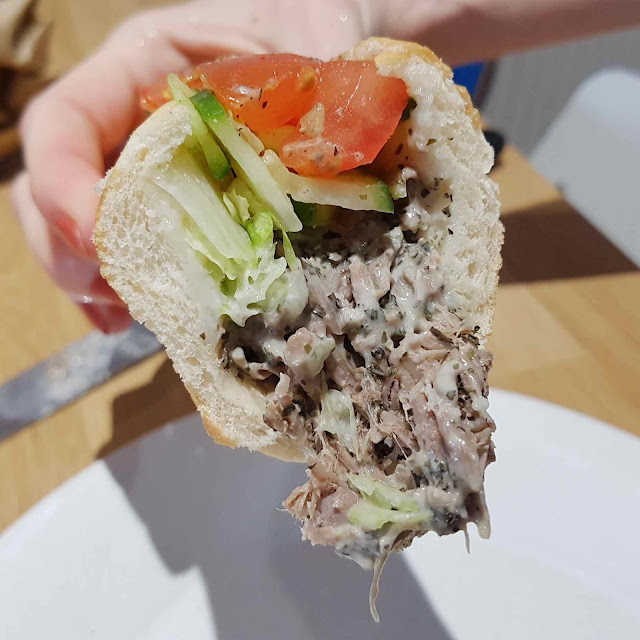 The Bagel Place in Cardiff University Student Union is apparently the only place in Cardiff which bakes their own bagels. Made fresh throughout the week, they’ve got a range of flavours (including poppy seed, sesame and plain) and fillings as well as a couple of cute resident dogs. 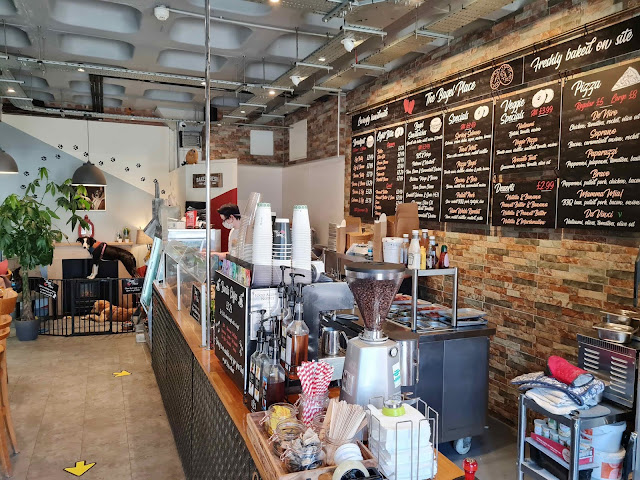 The bagels are tasty with a decent chew and they’re good value too. An everything bagel with butter (£1.79) was laden with sesame, poppy and onion flakes. 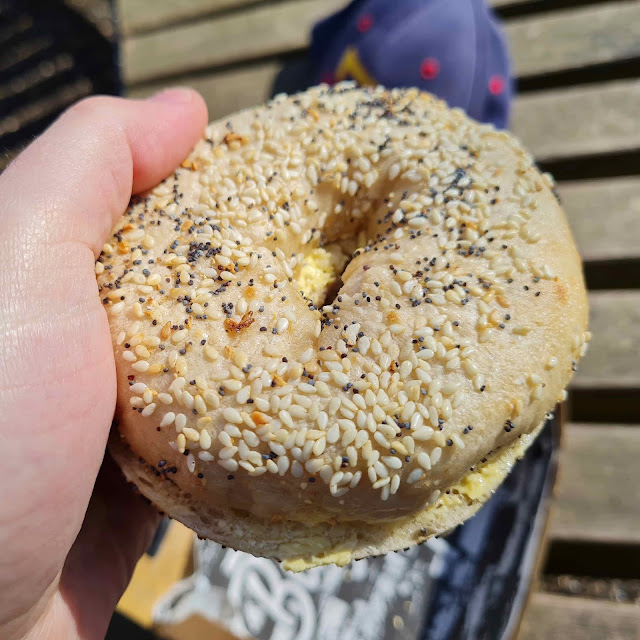 A spring salmon special (£4.59) was generously topped with smoked salmon and a good schmear of cream cheese. Balance was provided in the form of punchy capers, red onion slices and a good squeeze of lemon. 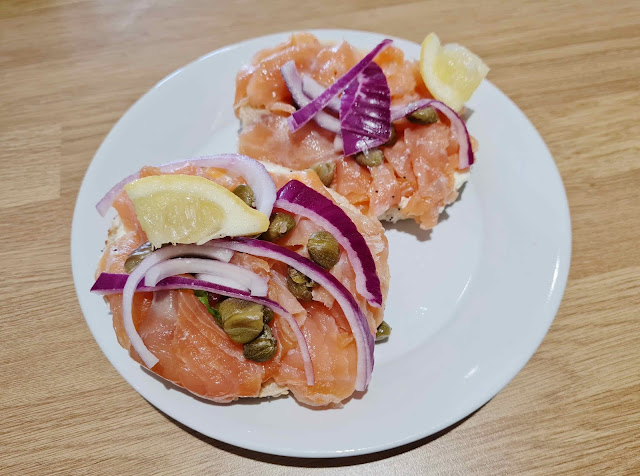 The old skool Inma’s Continental Stores in Grangetown sells a compact range of sandwiches alongside Spanish and Italian meals such as paella, tortilla, lasagne and meatballs. But there’s one thing for which they’re well known - their garlic chicken baguette. 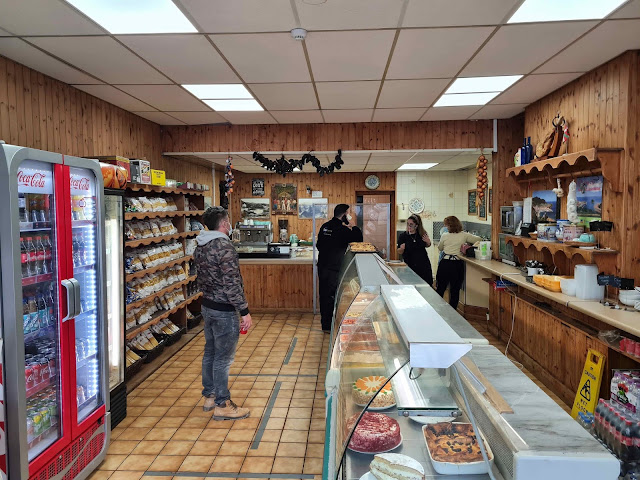 For a very reasonable £3.30, you receive a crisp white baguette stuffed to overflowing with hot crisp crumbed chicken, mayo and fresh salad. I could barely detect any garlic but it still hit the spot. 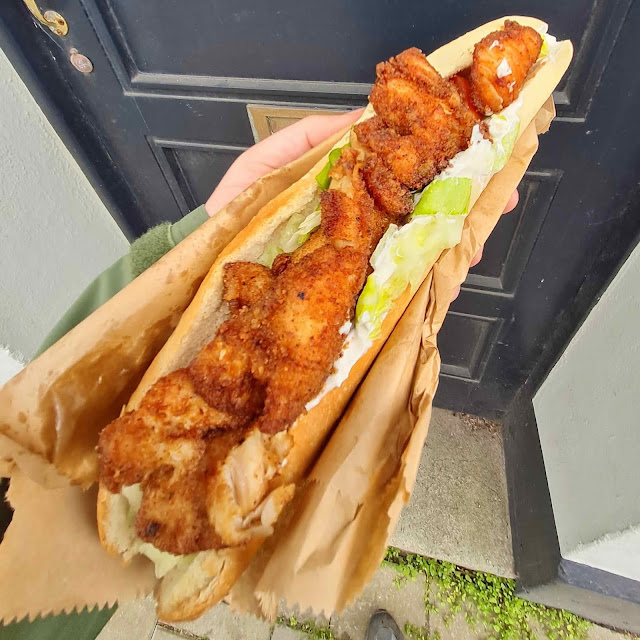 If you’re looking for a carvery sandwich then it’s probably a good idea to head to someone with the credentials of Oriel Jones butchers. 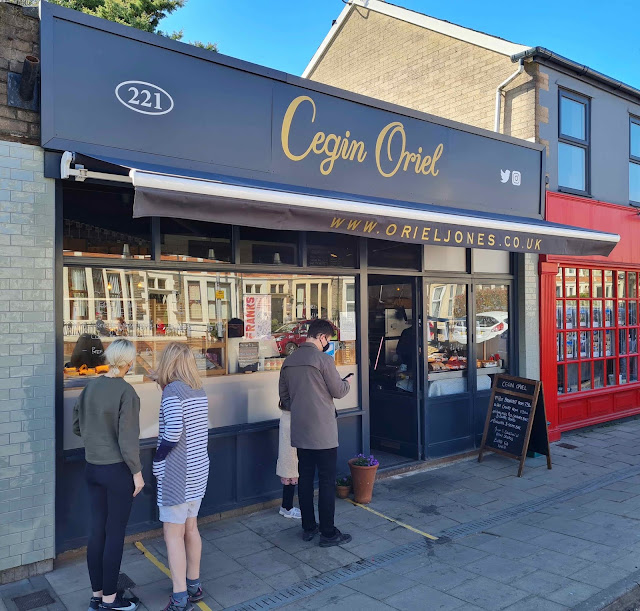 Cegin Oriel is the cooked food offshoot of Oriel Jones and it sells a range of sandwiches, pies, sausage rolls and traditional puds such as sticky toffee pudding and bread and butter pudding.
But, it’s their breakfast and carvery sandwiches which get people queueing. 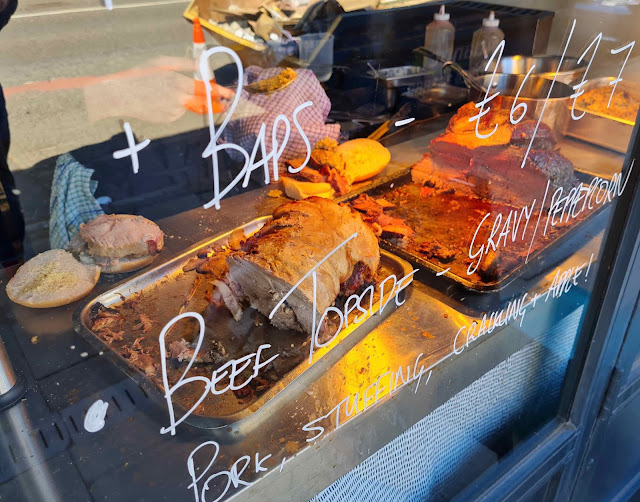 A blushing pink roast beef bap (£6) was tender of flesh and topped with a good dollop of decadent and warming peppercorn sauce. 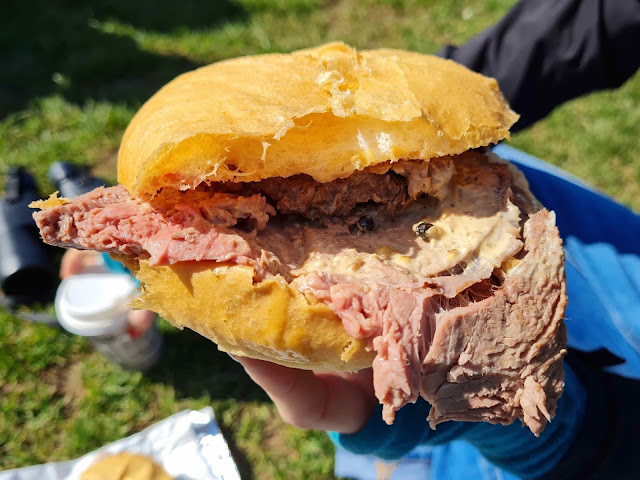 Yielding roast pork (£6) combined well with soft paxo-esque stuffing and chunky apple sauce. It was just the ticket before a three hour yonk along the Taff Trail. 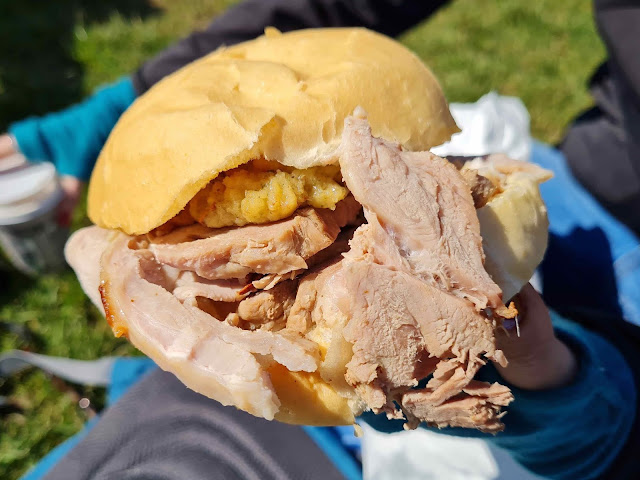 I would never have ventured into Gathering Ground on Wedal Road if it wasn’t for a recommendation from a trusted source.

This dog friendly cafe has a rather appealing takeaway menu featuring sandwiches such as fish finger with tartare sauce and glamorgan sausage with chilli jam as well as soups and all day breakfasts. 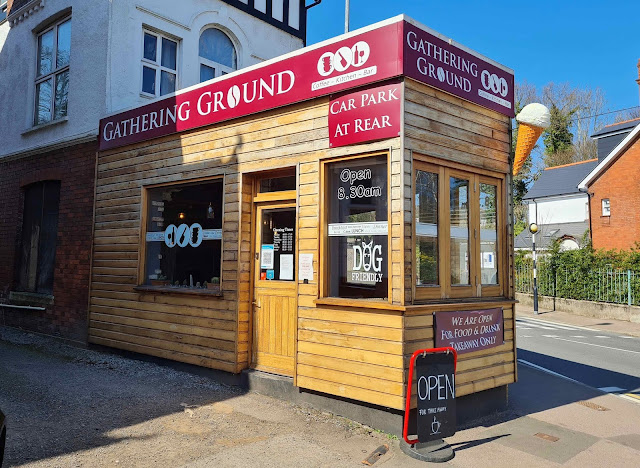 A club sandwich (£6.50) was a textbook example and probably the finest of its type I’ve had in Cardiff. 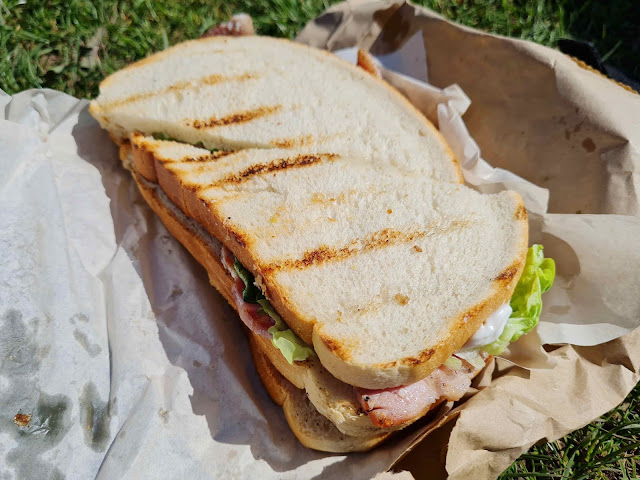 Soft toasted white bread was filled with tender char-licked chicken breast, thick cut bacon (the fat could have been a little crisper), mayo and fresh salad. It was a hefty number and lovely eaten in the nearby sunshine of Roath Park Rose Garden. 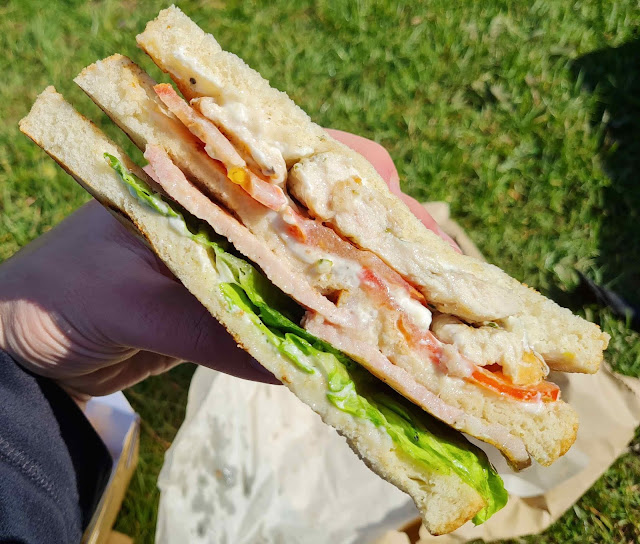 Triple cooked chips (£3) were very good too - golden, crisp, fluffy rustlers they were accompanied by a generous dollop of mayo. 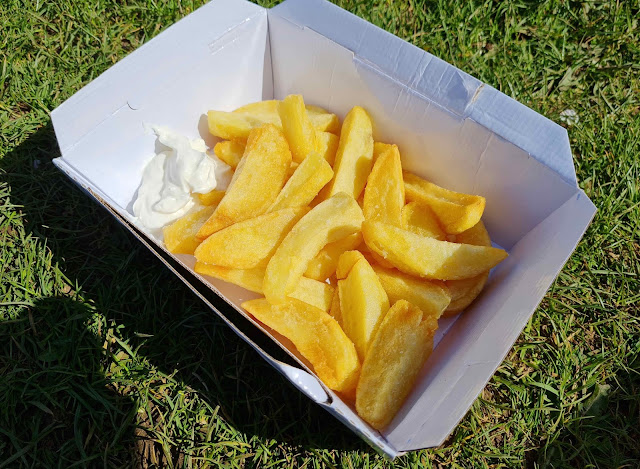 There’s a lot to love about Cardiff’s sandwich roster from the old to the new. If you’re working from home then get out and show them some love.
Posted by gourmetgorro at 08:00