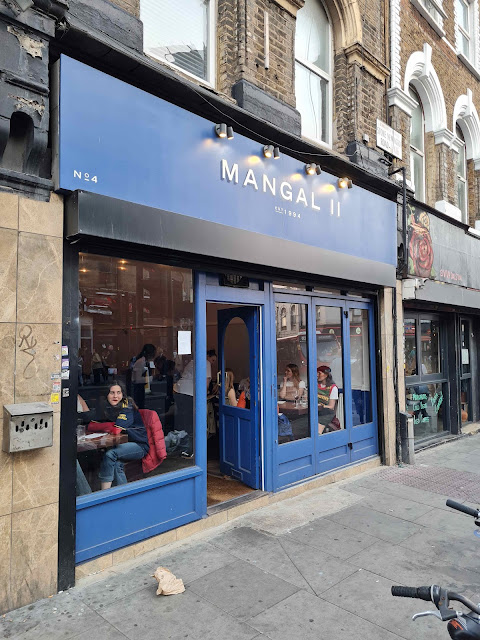 I can't think of a restaurant that I've been as excited about visiting as much in a long time as Mangal 2.
The story of the 25-year old traditional Turkish grill house which reinvented itself last year to serve modern Turkish food is something which resonates with my internal conflict between Friday night doner muncher and try-hard hipster wannabe. 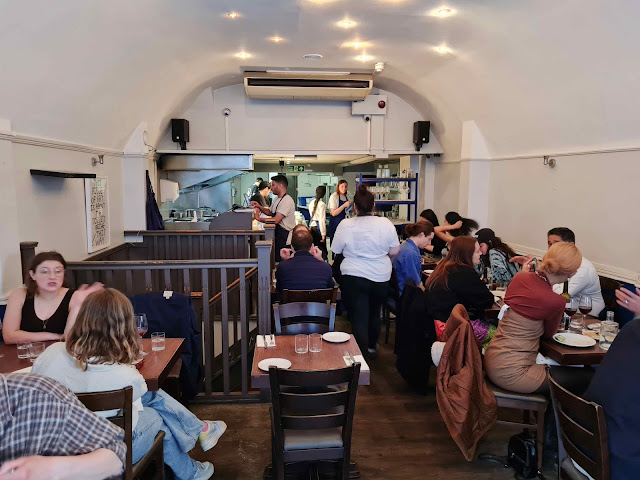 With multiple glowing reviews from bloggers and national critics; a booze list which features natural wines, local craft beers and 3Fonteinen lambic; and a menu with captivating dishes such as lambs heart pide with pickled cucumbers, it was top of our list of places to visit on our most recent trip to London.
So, we found ourselves in Dalston on a vibey Saturday night, tucked away in the downstairs dining room of the rammed restaurant. Starters all smashed it out of the park.

Light and crisp chickpea fritters (£9) were capped with intense smoked cods roe and the crunch and zing of pickled cabbage. 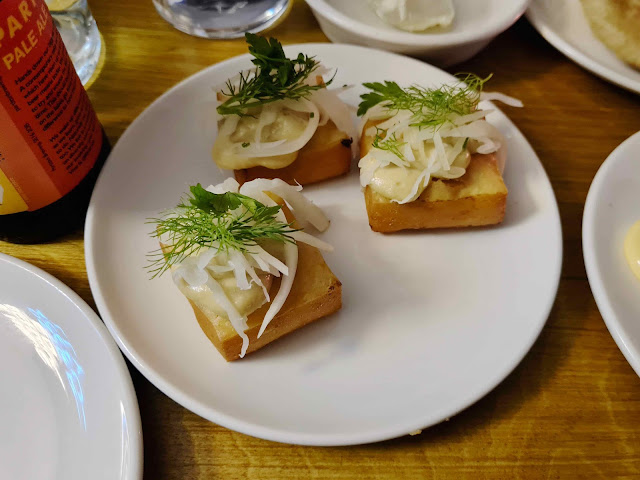 A brilliantly crisp, soft and airy sourdough pide (£3) was as good a restaurant bread as I've had in a good while. Drenched in fat it was also accompanied by whipped butter with a superb cultured tang. We immediately ordered another. 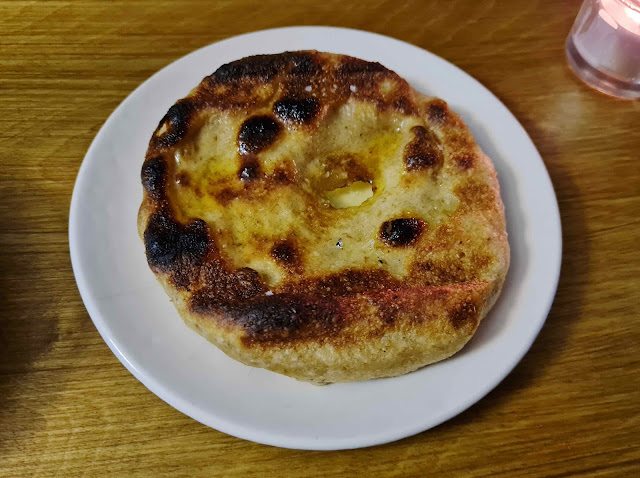 A cull yaw (ewe mutton) kofte (£5) was exemplary - intensely lamby, juicy and accompanied by a blob of chicken fat mayonnaise, this was top tier kebabage. 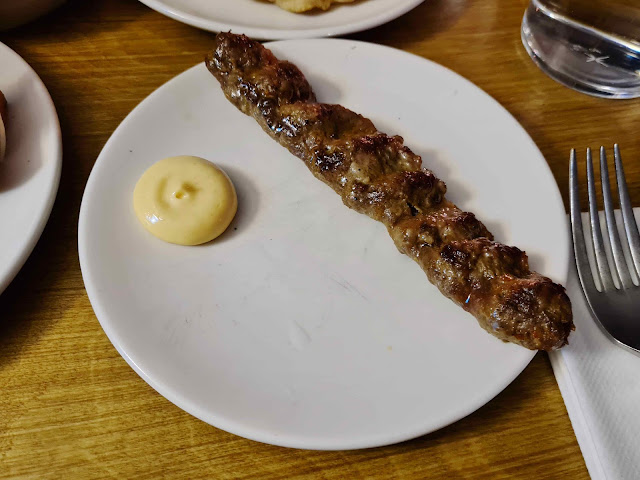 Mains was where we first encountered a few issues.

A precisely cooked sweet fleshed lemon soul (£32) was covered with a buttery sauce seasoned with the intense earthiness of brown crab. It sat on top of nutty bulgur dressed with more of that excellent brown crab sauce. 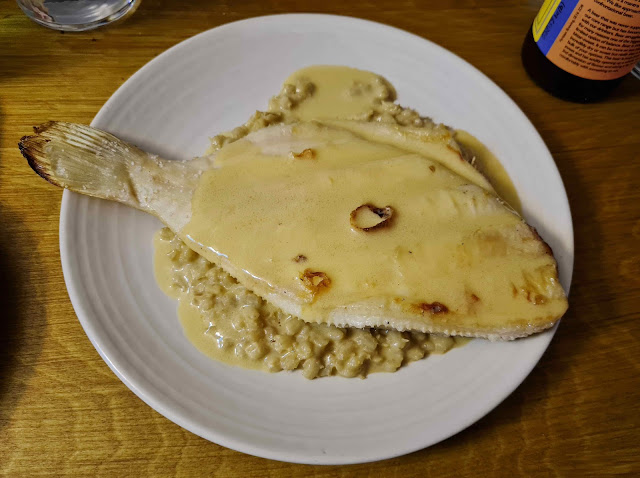 Our two other mains could best be described as arriving at our table as warm - having already waited a long time for our food and with no check back from the very friendly yet stretched server, I was only able to raise the issue once we'd finished our plates.

Cull yaw loin (£28) was served a bob-on medium with a lovely depth of flavour, light chew and lick of char. Comfortingly meaty lentils flecked with bits of lamb offal and a charred green pepper were great accompaniments, but it was a dish which would have been so much nicer if it was hot. 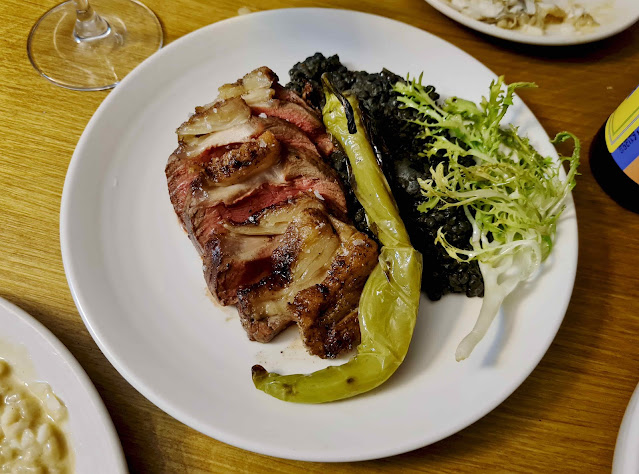 A tepid bowl of ratte potatoes (£7) were dry, lacked the crispness which they teased from their blistered appearance, and didn’t really deliver on the promised hit of sucuk and aged kasar cheese. 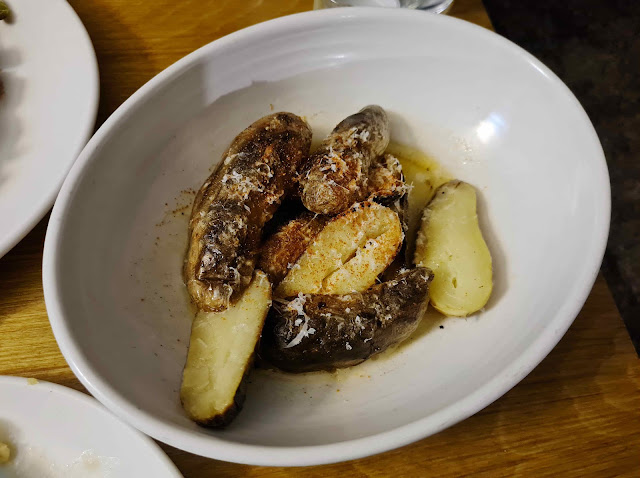 Desserts were also a mixed bag.
An excellent warm, soft and sugary carob cake (£9) was accompanied by a genius dollop of butterscotch with the nutty savouriness of tahini and a glug of hazelnut milk which was a more than fitting substitute for cream. 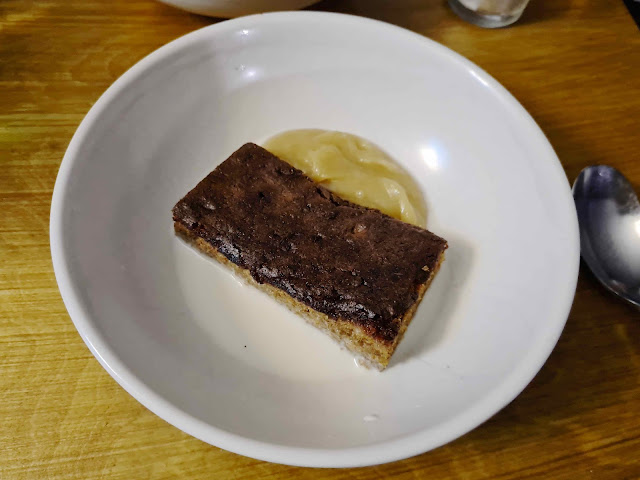 A scoop of floral mountain ice cream (£9) and zingy rhubarb pieces and coulis were all bang on the money. But it was topped with a piece of baked filo which perhaps would have more appropriately been described as charred filo. Unfortunately, the astringent taste of the pastry rather overwhelmed everything on the plate. 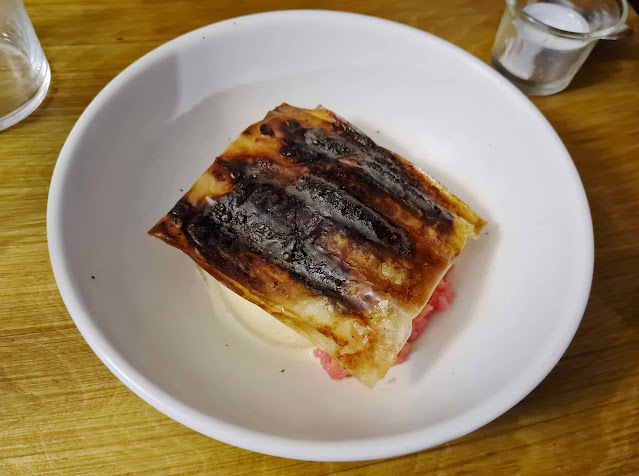 Overall we had a tasty meal at Mangal 2 with flashes of brilliance. However, there were a few too disappointing elements for me to recommend it wholeheartedly.
The Details:
Address - 4 Stoke Newington Rd, London N16 8BH
Web - https://www.mangal2.com/
Telephone - 020 7254 7888
Posted by gourmetgorro at 18:00