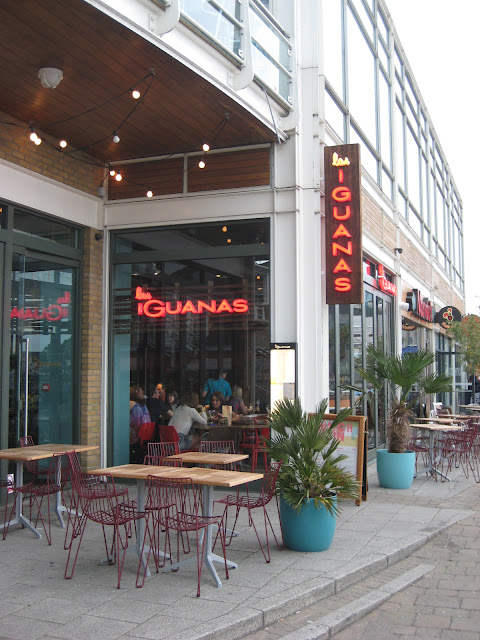 It was my birthday party last night and as I hadn’t eaten Mexican in ages and had been recommended the new Las Iguanas in Cardiff bay, my decision was made. As far as my experiences of Mexican food go, they run to a couple of visits to Wahaca (pretty authentic I think and fairly tasty) and countless visits to Chiquito’s and Taco Bell (totally unauthentic slop which I have a soft spot for it). Las Iguanas sits in a happy place closer to the former than the latter.
The interior of Las Iguanas has a really trendy favela chic kind of thing going on. Think moody lighting, reclaimed wood, eclectic fixtures and fittings and Latin American murals. It really gives the place some serious atmosphere to get you in the mood for a Mexican feast.
We’d booked our table for 6:30pm on the basis that the cocktail special offers (2 for 1 on selected drinks) run until 7:30pm and we wanted to get as much booze for our buck as humanly possible. For reasons unknown (perhaps the first 2 pitchers of Cherry Fizz) we ended up ordering 6 pitchers of Cherry Fizz and 2 pitchers of Long Island Ice tea (there were only 6 people drinking). Cherry Fizz is a mix of cherry brandy, Plymouth gin, elderflower & lemonade with cranberry & lemon juices. It was reminiscent of an 18th birthday punch and basically tasted of cherries - eminently quaffable for the first 5 glasses but a little sweet beyond that dangerous point of no return.
Our incredibly friendly and efficient server tipped us off when time was running out on the happy hour and the tapas special offers (3 starters for £13.20 and 5 starters for £22.00 before 7pm) so we got our food orders in swiftly. To start, we decided to mix and match, sharing a selection of starters and a taco sharing plate. Now I must caveat my review with an admission that before the starters were even served, my taste buds were already well and truly sullied by cherry fizz and owing to the fact it was my birthday party I was feeling in more of a celebratory than critical mood. However, I can say that the first course was very enjoyable without going into too much further detail. The taco sharing plate (£13.00) was really good fun consisting of a large platter with all the fixings for making your own tacos (soft flour tortillas, little pots of melted cheeses & salsa, a salad of onions, radishes & spring onions, sour cream & choice of toppings – we’d opted for Shredded beef, slow-braised in smoked chilli, Spiced shredded lamb and Spicy garlic & chipotle roast squash). Calamari (£5.20) were good and Lamb Empanadas (£5.20), mini pasties filled with slow-braised lamb, were reported to be excellent.

Onto mains and once again as the amount of cherry fizz consumed increased, levels of criticality declined. My burrito filled with shredded beef and caramelised onion was enjoyable but ultimately flawed. The tortilla was too crisp making it pretty hard work, the filling was light on beef and the side salad was pretty unoriginal. In contrast some of the other mains were of a much higher standard. Mrs G’s chicken fajitas (£13.50) were excellent - beautifully seasoned chicken with tons of sizzling peppers and onions, and the usual sides were bang on. A sirloin steak was well flavoured and tender (£15.20) whilst churrasco fiasco (£13.50), rump steak kebabs, had an almost curry like quality to them due to the cumin laced marinade.
At this stage of the review I’ll digress to admitting that it probably hasn’t been since I had my birthday party at McDonalds when I was 8 years old that a restaurant has made me feel so special on my birthday as Las Iguanas did last night. Last week, I’d received an email with a voucher so that I could have a free main, our waitress offered to take photos of our group throughout the evening, I was brought balloons and also a mini chocolate brownie sundae with a little candle on top. Some might say this is slightly over the top for a nearly 30 year old male….but not in my book. All that was missing was a visit from the Hamburgler.
Onto desserts and by this point I was stuffed and drunk and therefore felt compelled to order something. Inexplicably I ordered a larger version of the free dessert I’d just eaten. It was good but not revelatory and this was the theme for most of the desserts. My chocolate brownie sundae consisted of warm pieces of cake, vanilla ice-cream, banana slices, chocolate sauce and cream. I’m sure I could taste some cinnamon which elevated the flavour of the dish but once again this might have been the cherry fizz addling my brain. Other desserts included an enjoyably boozy Brazilian trifle with guava jelly and cachaca (a Brazilian spirit), a fairly average spiced chocolate orange fudge cake and the pick of the bunch which was a really very good creamy cheesecake topped with moreish roasted macadamia nuts (“It was leaps and bounds ahead of the rest” to quote the bucketman Rhys).
I had an immensely fun evening at Las Iguanas and I’m really keen to go back to taste more of the food they have to offer. If I steer clear of the cocktail menu then I’ll also pass a more critical eye over the food.
The details: Las Iguanas, Unit 27, Ground Floor, Mermaid Quay, Cardiff, CF10 5BZ, Tel:029 2045 9165, Web: http://lasiguanas.co.uk
Posted by gourmetgorro at 21:22