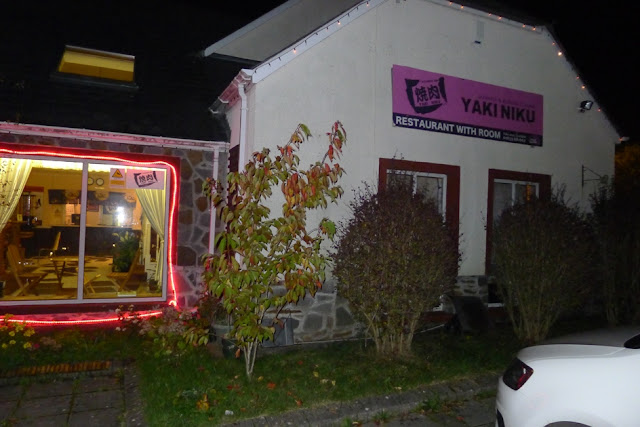 Cardiff doesn’t have a destination restaurant right? Surely no-one would plan a visit to Cardiff just to eat out?  I can understand why someone would travel specifically to Abergavenny or Whitebrook. But Cardiff.....

How wrong I am. Koreans regularly visit Cardiff’s own Yakiniku from Birmingham, Swansea, Bristol and even Reading in order to get a fix of their national cuisine. Rather peculiarly Yakiniku is located in the almost rural feeling Seoul House Hotel a few metres from the welcome to Newport sign on the A48 in St Mellons. A few feet extra and Newport would have the destination restaurant.

When we arrived on Saturday evening, the car park was rammed and the party was in full swing. A large group of Koreans gave the homely dining room a buzzing, friendly feel.  It felt like being transported a few thousand miles away from Cardiff.

I’ve never eaten Korean food before but I’d already figured out a battle plan. Having studied the menu extensively in advance, I picked out the restaurant's recommended dishes which I’d encountered in my lost years of food blog trawling.  In fact I’d seemingly picked so well that our server noted that we’d ordered in a similar vein to their usual Korean guests. I had to explain that I spend a LOT of time reading about food on the internet.

As I sipped a refreshing bottle of Hite lager, a few bowls of complementary appetisers were brought to the table. The cold, fresh vegetables were the perfect way to take the edge off my eager stomach. Crunchy, slippery beansprouts were lightly dressed in soy; slivers of soft seasoned potato strips went down a treat and a bowl of slightly vinegary, chewy unidentified vegetable provoked debate.....I’m 31% confident they were mushrooms but forgot to ask. 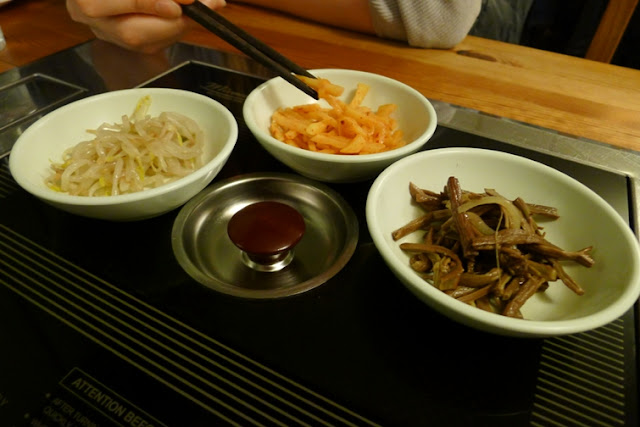 For starters Mrs G opted for some extremely fresh California rolls. The moist but firm rice cosseted a well balanced filling of avocado, crab stick and cucumber. I’m normally a crab stick hater rather than a lover but they worked well in this case. My starter was the Seoul house chicken salad. I’ve wanted to try Korean fried chicken for ages and it didn’t disappoint. The chicken was beautifully moist and coated in a light, crisp almost tempura light batter. In contrast, the pedestrian iceberg lettuce leaves and chilli sauce it came with let the team down slightly. 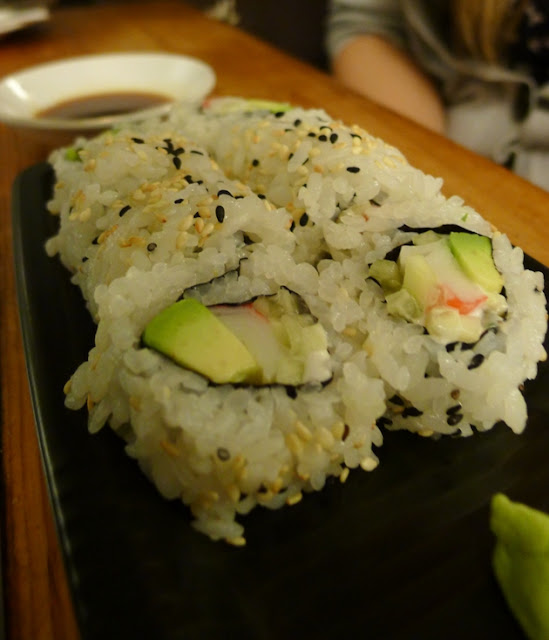 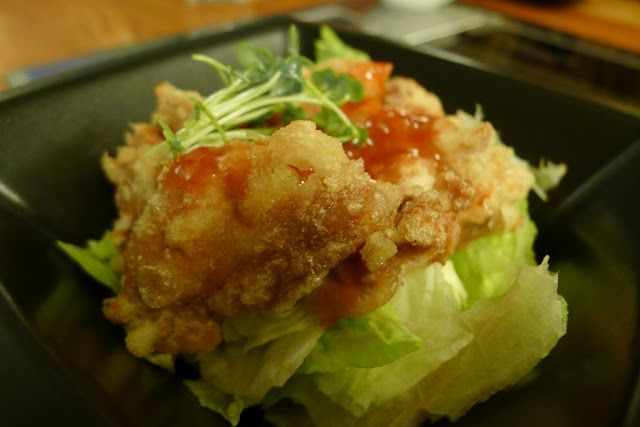 Mains were where the party started. A switch was flicked in the middle of the table and in an instant it lit up like a 70’s electric coal fireplace.  After 10 minutes, the lid was whipped off to reveal a searingly hot electric Korean barbecue (Yakiniku). With it being patently obvious that we were novices, our server lent us a helping hand and placed our sesame oil marinated pork belly strips and vegetables on to cook for us. 5 minutes later the crisply cooked pork belly and slices of squash, courgette and aubergine (and so on) were ready to take off the grill with our chopsticks and dip into the silkiest soy and sesame oil dipping sauce I’ve ever tasted.

To go with our Yakiniku we also ordered Bul Go Ki. Tender, wafer thin steak marinated in soy, sugar and sesame oil almost had a slightly sweet meat stew kind of thing going on. It was good and worked well with the bowl of Dol Sot Bi Bim Bap we ordered. Served in a heavy hot stone bowl, this rice dish looked as pretty as a picture before it was stirred. Unfortunately I’ve only got the after shot. A bowl of rice was adorned with a mixture of vegetables, a relatively mild chilli sauce and a raw egg. When stirred together the egg cooked in the hot bowl to produce a sticky, eggy, slightly spicy bowl of moreishness. 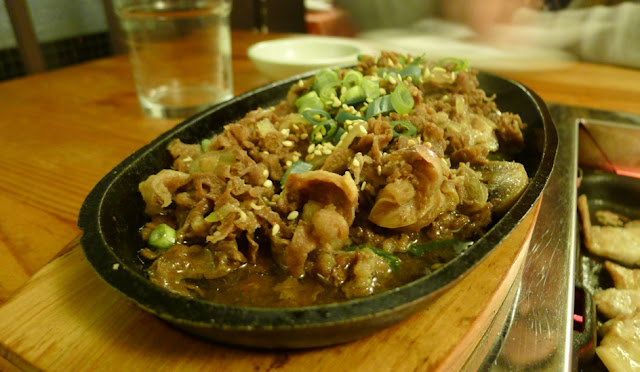 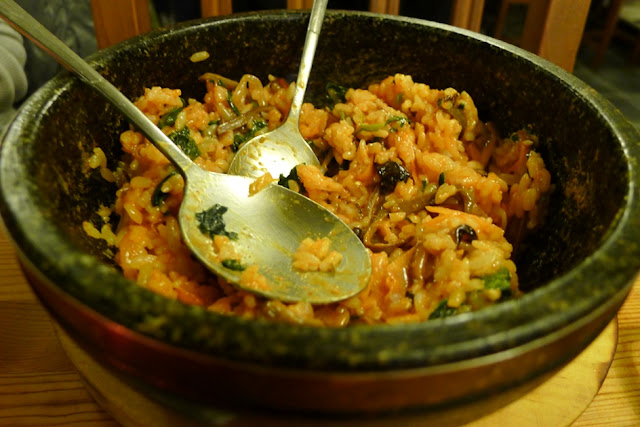 I washed the main course down with a Lime Soju cocktail. Soju is a Korean spirit which tastes like a slightly sweetened vodka but overall the drink tasted like a pint of lime squash. Dangerously refreshing. 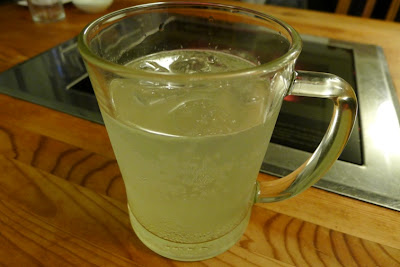 Nearly beat, we rounded off the meal with a bowl of matcha ice cream. Smooth, creamy and with a fragrant green tea after taste, it was the perfect end to an excellent evening. I can’t wait for my next Yakiniku rematch. In my mind I’ve already pre-ordered the Yum Yum Fried Chicken. I’ve got a strong feeling it’s going to be finger licking good. 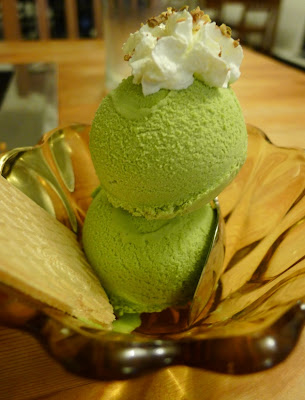