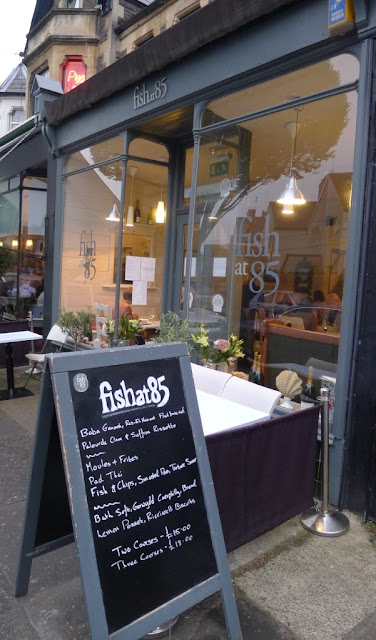 I know a lot about fish. No that’s a load of rubbish. I know a little bit about canned fish. Having worked for one of the UK’s biggest canned fish manufacturers for a couple of years I picked up a few bits of information about the UK canned fish demographic. Firstly, I know that anyone who buys tinned soft cod roe or cockles is the most prized of canned fish customer. They’re the ones who you want to remain brand loyal as they’ll buy every product you make. Secondly, I know tons of people in the UK don’t prepare much fish at home beyond tuna sandwiches, breaded frozen fish & the occasional salmon fillet. People are scared witless of cooking fresh fish. They don’t know what to do with it, they’re afraid of the bones and they don’t like the smell. 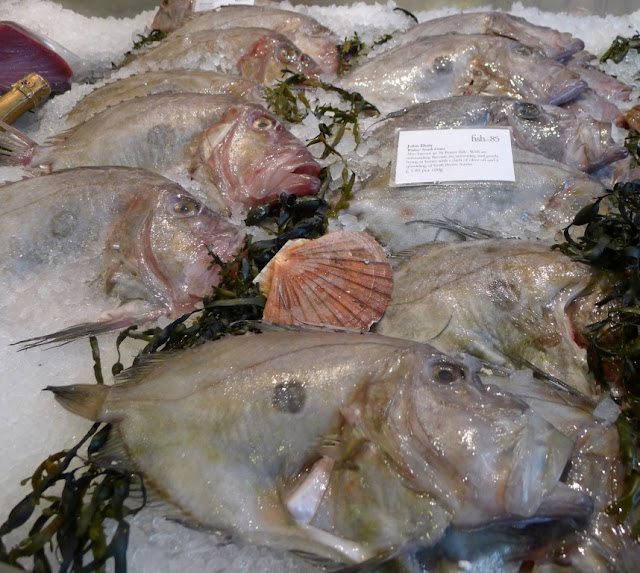 It’s surprising then that there aren’t more fish restaurants knocking around. If you won’t cook it yourself at home then you’d think it’s more likely you’d want someone else to do it for you. Which brings me to Fish at 85; Cardiff’s recently opened & only fish restaurant. It’s also perhaps my new favourite restaurant in Cardiff.

Sited in Pontcanna, Fish at 85 is the first retail venture of Channel Fisheries, fish suppliers to the Royal Household (how appropriate for the Jubilee weekend) and a number of the UK’s top restaurants. From Fish at 85’s base in Pontcanna they rather cleverly run three businesses in one, wholesaling fish to other restaurants in Cardiff, running a fishmongers and a rather charming 20 cover restaurant. 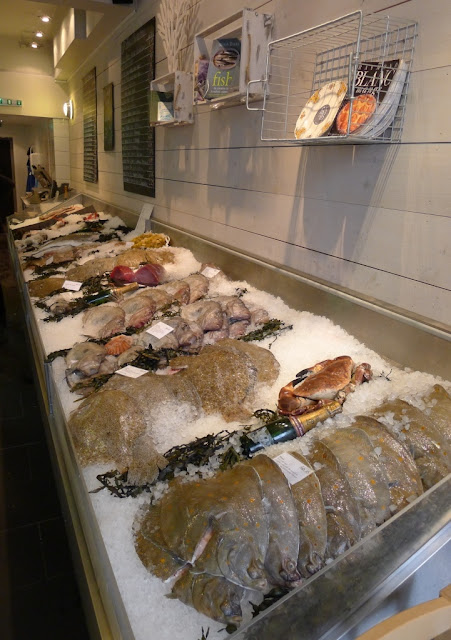 This closely intertwined trinity of enterprises does bring a few quirks to the dining experience at Fish at 85. Firstly, you’re squeezed into the dining room a little bit like sardines. Secondly, you have an audience of fresh fish watching you eat from their counter which runs the length of the dining room. Thirdly, the occasional customer might pop in during your meal to buy last minute ingredients for their dinner party. Lastly, there's a mild aroma of fish which you quickly acclimatise to. However, I think these idiosyncrasies just add to the charm of Fish at 85. Seeing your fish picked from the counter to be cooked for your dinner certainly reassures you about the freshness of the food you’re about to eat. What’s more as far as fishmonger interior design goes, it’s pretty darn tasteful. In fact, the whitewashed woods and eclectic fittings wouldn’t look out of place in a Country Living fish special edition. 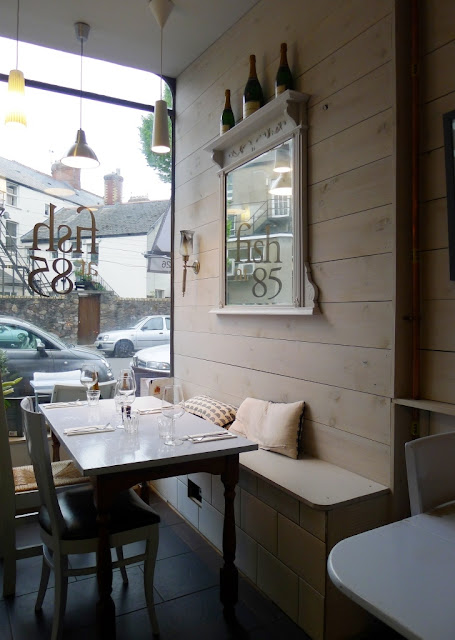 Understandably, the menu focuses exclusively on fish with a couple of veggie options. A fixed price menu giving you 2 courses for £15 or 3 courses for £18 is available from 12pm-3pm and 6pm-7pm (if you return your table by 8pm). On the night we visited dishes included clam risotto to start and fish & chips or moules frites for main. Mrs G and I however couldn’t resist the a la carte menu. Alongside a good selection of starters (£7 on average) and classic main dishes (£14 on average) you can also select your own fish from the counter, choose how you’d like it cooked (roasted, pan fried or en papillote) and also the accompaniments & sauce to go with it. If you’re generally clueless like me and Mrs G then the knowledgeable waiting staff will give you an enlightening guided tour of the fish counter.

To start I ordered crab meat, nam jim and glass noodles (£8). Wow. One of the best crab dishes I have ever eaten. A generous amount of cold brown and white crab meat was garnished with a few glass noodles dressed in fish sauce, red chilli and spring onion. It was simple but with crab meat of that quality not much else needs to be done other than put it on a plate. 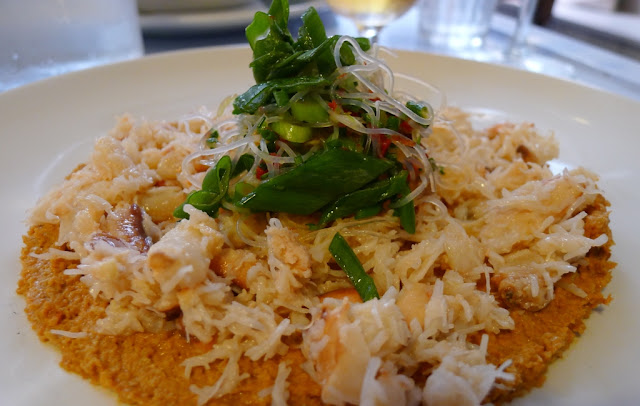 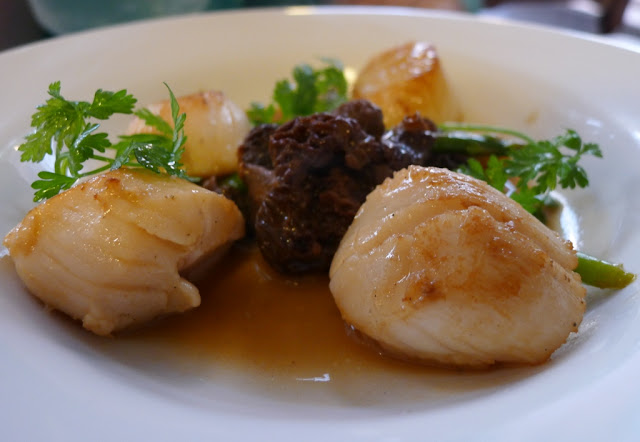 My main of monkfish, green chilli and saag (£15) incorporated the only average note of the evening. A delicious & precisely cooked piece of meaty monkfish was let down by the accompanying saag which was a little watery, too subtle in spicing and laden with cardamom pods. I had to pick about 8 of the hard blighters out of my mouth. The irony is we didn’t encounter a single fish bone all evening. A minty raitha was the perfect dip for some crisp and fluffy fat chips (£3). 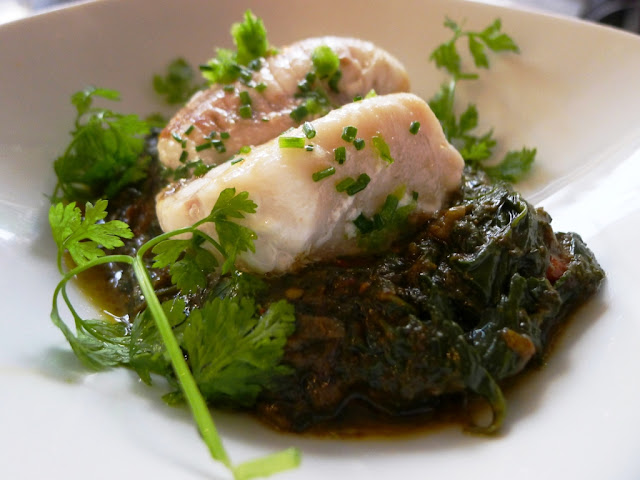 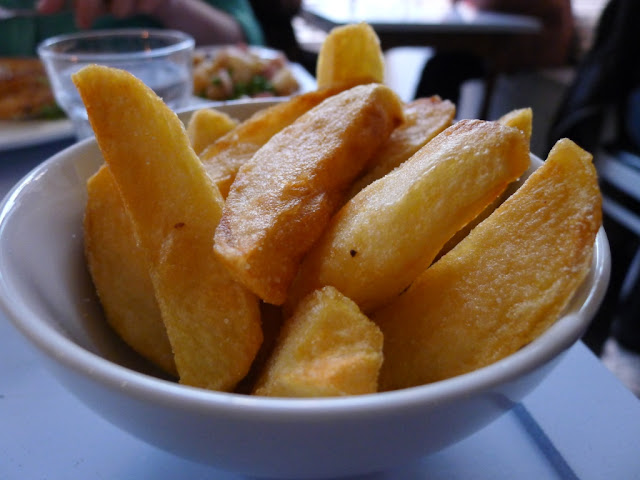 Mrs G’s main was the highlight of the evening. It’s probably the best piece of fish either of us have ever tasted. Her pan fried lemon sole from the counter (price by weight - £24.33) was sweet, crisp and juicy. I could have eaten it all year long. The accompanying beurre blanc enhanced the beautifully cooked piece of fish. A side of seasonal green vegetables (£3) was prepared just the way I like them; meaty and buttery. 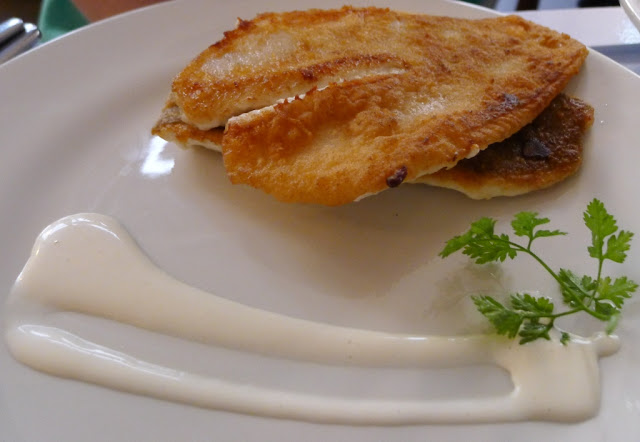 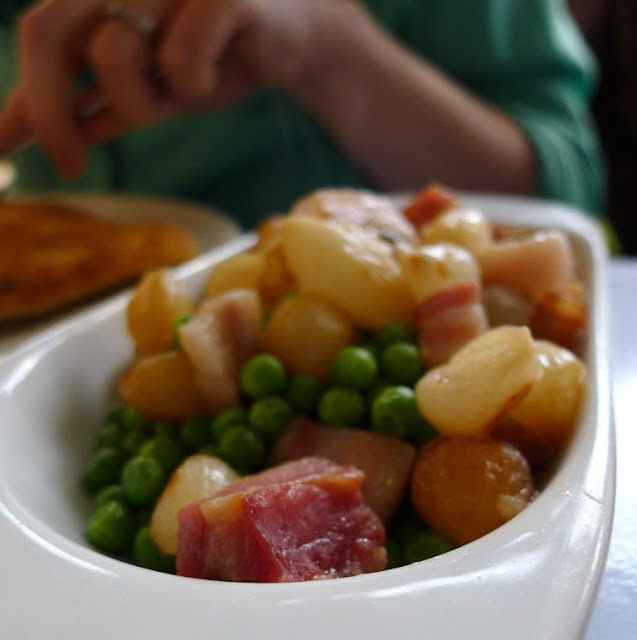 You’d expect the desserts might be an afterthought in a place whose raison d’etre is fish. Thankfully the incredibly high bar set by the first two courses didn’t lower.

Lemon posset (£6) was incredibly smooth & creamy with a good sharpness of lemon. Basically it was everything you could want in a posset. The ricclarelli biscuits it came with were dusted in icing sugar and had a crisp texture halfway between an amaretti and biscotti. 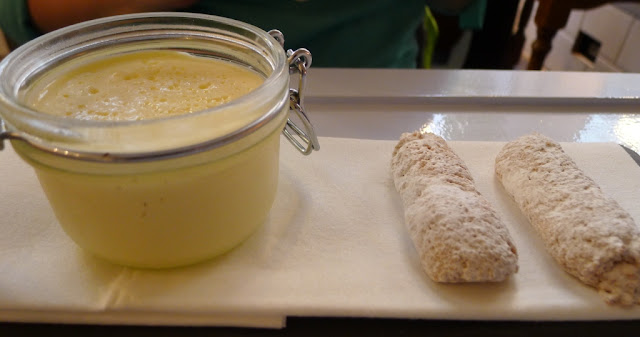 My plum duff with Birds custard (£6) was a delightful throwback. My understanding is that plum duff is traditionally a fairly heavy suet based pudding of the Christmas pudding ilk. Fish at 85’s version is more of a steamed sponge. Enjoyably dense sponge contained a few soft, sweet plums. On the side were a few more stewed plums and a jug of custard. It took me back to the misguided, sleep inducing 3 course lunches of my schooldays (French onion soup, roast dinner and jam rolypoly anyone?). 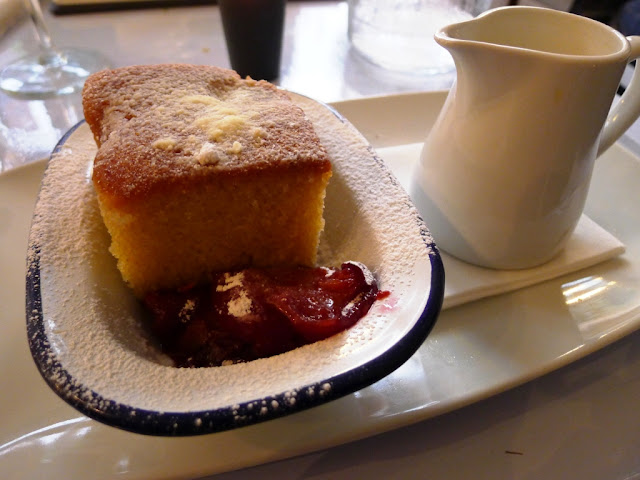 Our meal at Fish at 85 was just brilliant. They’re certainly doing the fishing industry of the UK proud. We spent our whole journey home questioning why we don’t eat more fish and resolving to eat more different types of fish.  Hopefully they’ve helped me to branch out from my usual repertoire of tuna sandwiches and teriyaki salmon. 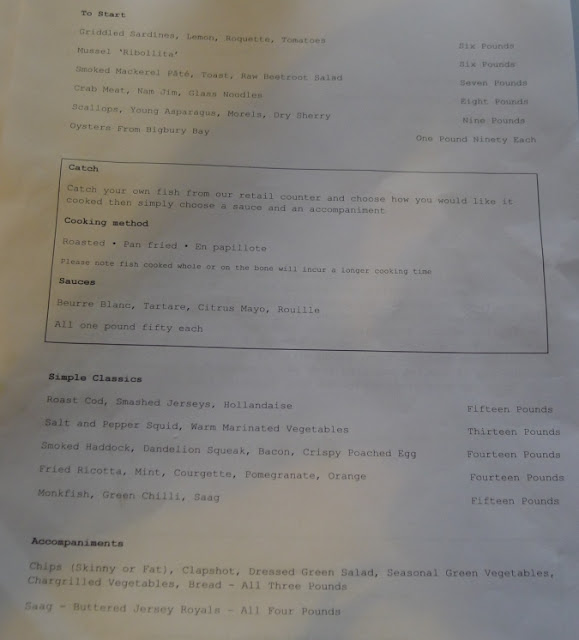 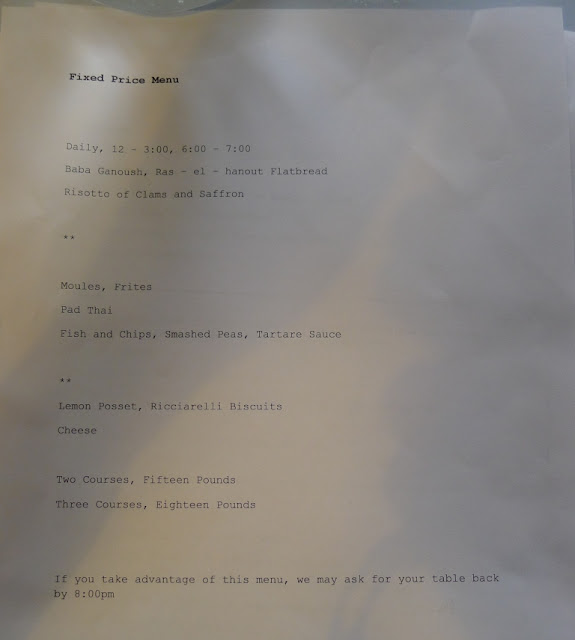 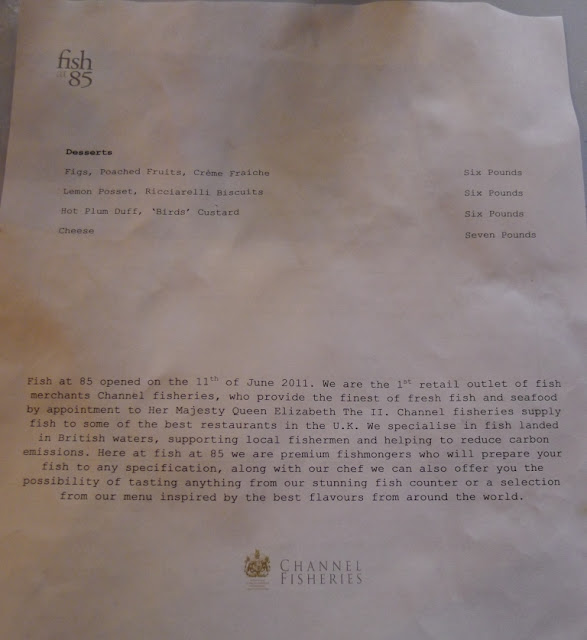