“Each new recipe may be likened to the discovery of a new continent. Science is there not only to guide us but also to help us exercise our innate capacities for discovery and invention.”
Herve This, Molecular Gastronomy: Exploring the Science of Flavor

In the case of chocolate orange chicken tikka, I believe it’s a continent which would have been best left undiscovered.

At its best, the principles of molecular gastronomy introduce the palette to unexpected and new flavour combinations, textures, smells and sights.

At its worst, it’s the tailor for the emperor’s new clothes, resulting in dishes which are gimmicky, pretentious and detract from the quality of the component ingredients. 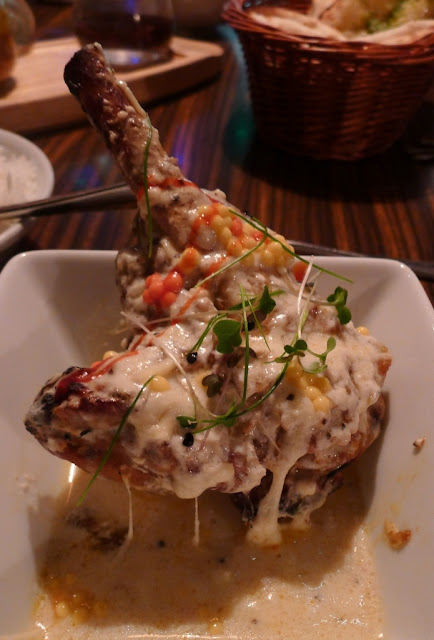 Moksh is the brainchild of Chef Stephen Gomez. His multi-award winning restaurant (Good Curry Guide – Chef of the Year 07/08 + 08/09) recently re-launched its menu with the proud acclimation that they’re the first Indian restaurant in the UK to use the principles of molecular gastronomy.

So, are the experiments carried out in the kitchens of Moksh Nobel prize winning?

Our table at Moksh was booked for 6:30pm on a Thursday. We were the first customers to arrive at the rather funky, graffiti adorned, amber coloured restaurant. Within an hour it was a full house. 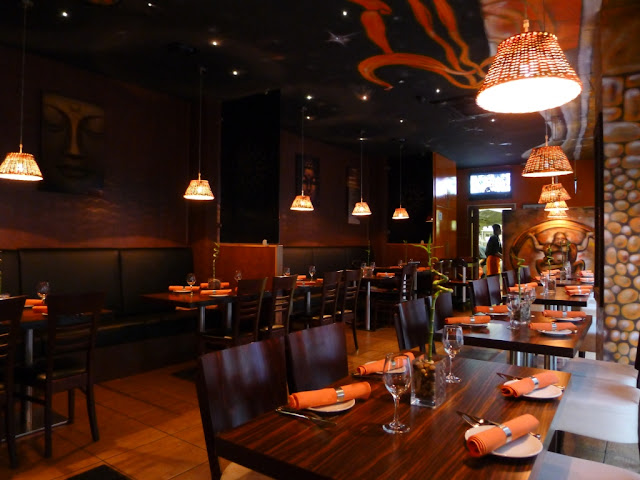 Whilst we waited for our friends, we got cracking on some excellent poppadoms and chutney. 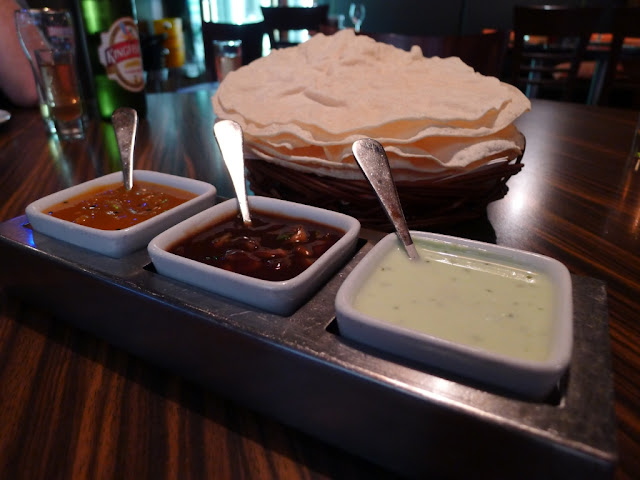 An interesting amuse-bouche of crisp deep fried bread sticks and a subtle pot of green tea jam raised my hopes about the weird and wonderful sounding dishes on the menu (it’s worth noting that there are a host of more traditional Indian dishes on Moksh’s menu, but I was there for molecular gastronomy) 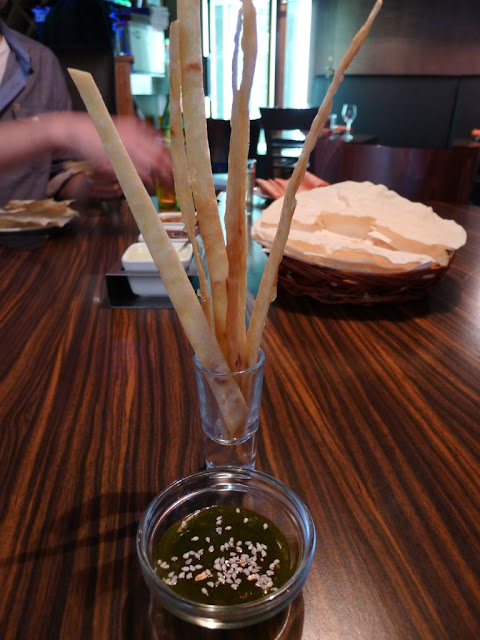 However, a shot glass of a “palette cleanser” was indistinct in flavour (mixed spices and menthol?) and unappealingly fluorescent in appearance due to the glassware in which it was served. 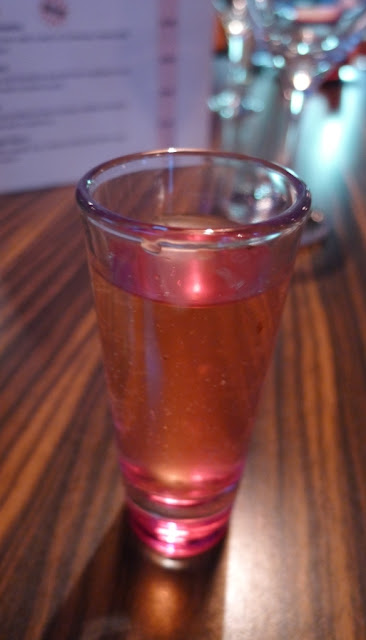 To start, I couldn’t resist the Moksh Delight (£6.30) as it gave me the opportunity to sample a selection of the more unique sounding first courses.

A piece of tender pork served in a mild tomato based curry sauce was spoilt by a rice paper wrapper which clagged as soon it hit the tongue. Naming issues aside, a Hyderabadi mince cupcake was a very good Indian take on Shepherd’s pie; spiced mince, smooth mash and a beetroot foam all complimented each other well. Lastly, chocolate orange chicken tikka tasted exactly how it sounded - tender poultry infused with the taste of Terry’s chocolate orange. I’ll move on quickly. Mrs G’s Avatar Aubergine (£5) was relatively successful but tasted a lot less complex than billed. Described as “an incarnation of baby aubergines”, this attractive looking dish was served with green tea cinnamon jam, spiced tamarind, pine nuts, mint foam and seasonal berries. Except for the soft aubergine, mild spicing and sweetness of berries, the other flavours were lost in the background. A smooth and sharp pink grapefruit sorbet arrived as a palette cleanser. I ordered Raan-e-Royals (£14) for main. If I had eaten the dish described on the menu then I’m sure it would have been excellent. A tender, tandoori cooked lamb shank was marinated in a lovely blend of green chilli, saffron, yoghurt, ginger and garlic. Unfortunately, the menu made no mention of the combination of oozing, sharp cheese and nondescript spherified fruit which clung to the meat. The dish was accompanied by a delicious mild curry sauce and an undressed salad of rocket and tomberries. 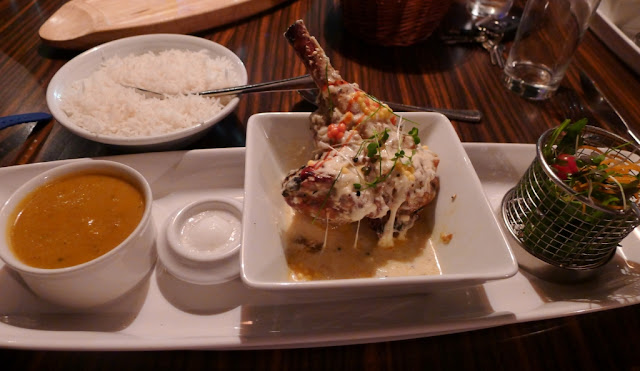 Mrs G’s Ratnagiri Mango Lamb (£13) was a delightful blend of spice and sweetness. Lamb pieces were served in a sauce made from mango pulp, coconut milk and chilli. This was a banging dish except for the reappearance of some more of the non-descript tasting spherified fruit and a damp squib of a dry ice generated cinnamon aroma (compare it to Casamia’s successful smell of the Amalfi Coast). 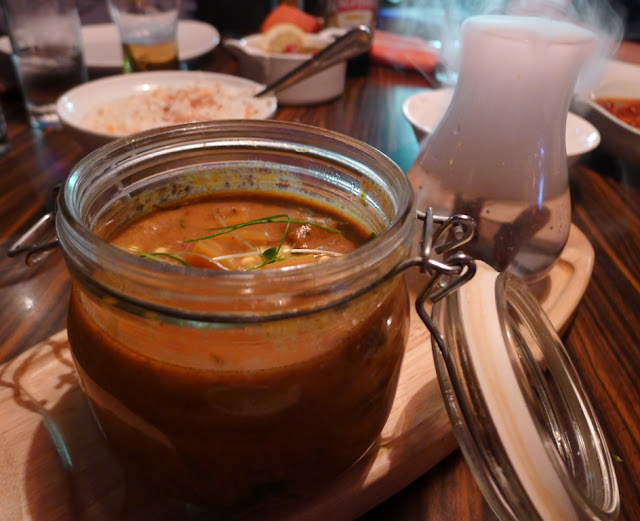 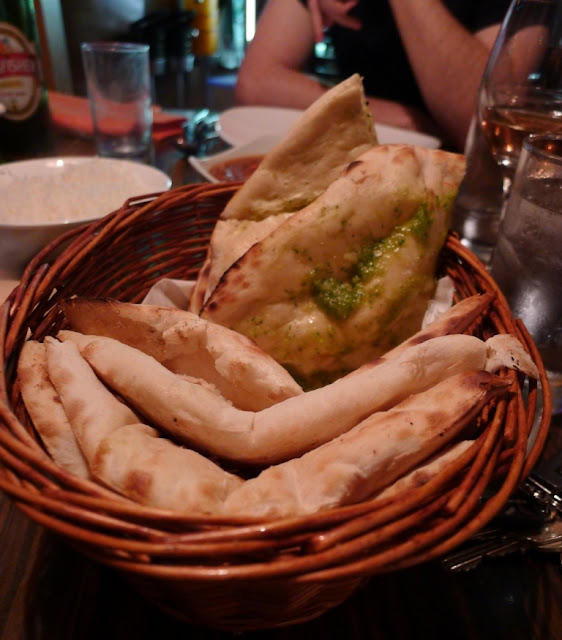 If Mrs G hadn’t ordered the Gajar ka halwa Yorkshire (£4) then I would have done out of sheer curiosity. A warm grated carrot dessert flavoured with cardamom and nuts was served in a Yorkshire pudding and accompanied by vanilla ice cream. Mrs G rated it highly but I felt the Yorkshire was a little limp. 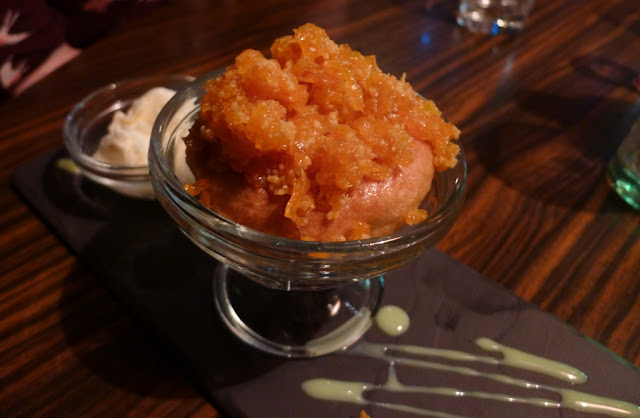 I ordered a traditional Indian ice-cream known as Matka kulfi (£4), flavoured with a mix of fruit and nuts.  Whilst the huge portion size and flavour were good, ice crystals had developed on its surface as it had been frozen in its earthenware pot. 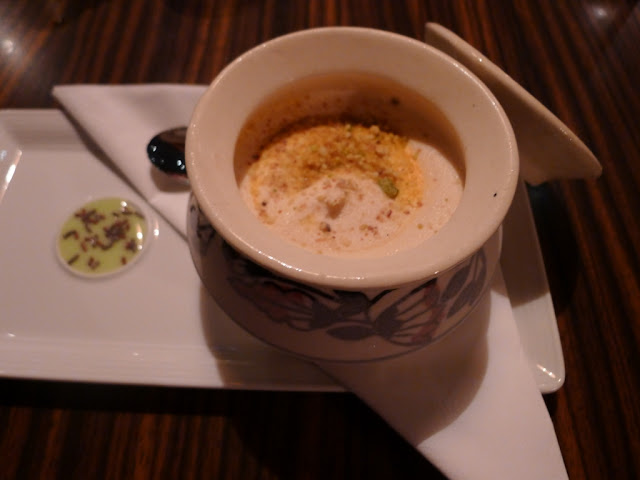 The bill was accompanied by some lovely miniature Welsh cakes. 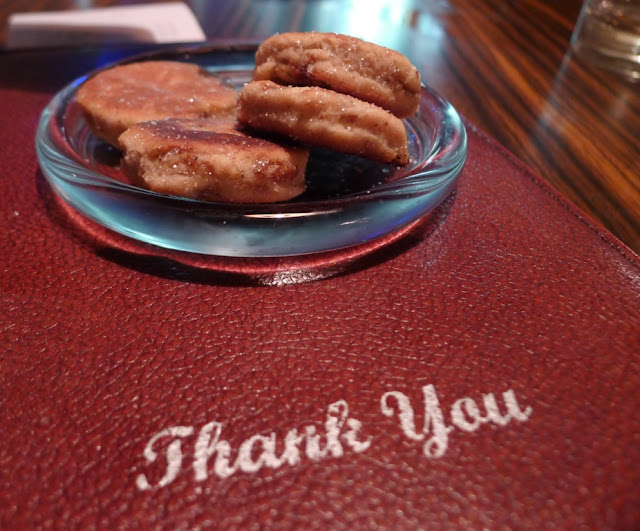 Based on the Scientific evidence, what conclusions can I draw about Moksh?

Get rid of the wacky gimmicks, and it’s clear Moksh can serve some excellent food.