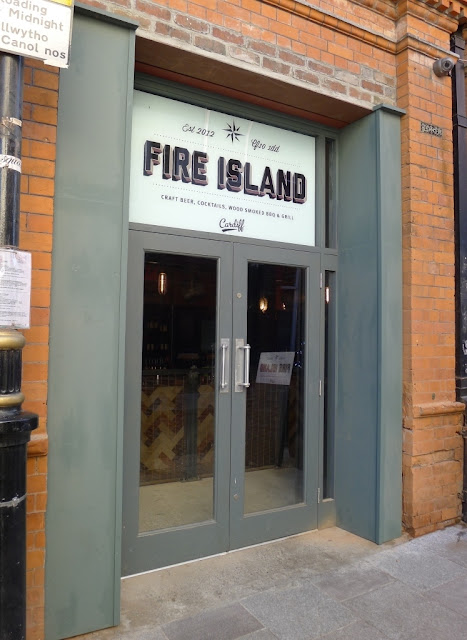 However, the arrival which has had me salivating with anticipation more than one of Pavlov’s dogs is Fire Island. Their description, “Craft beer, cocktails, wood smoked BBQ & Grill”, sums up the reasons. 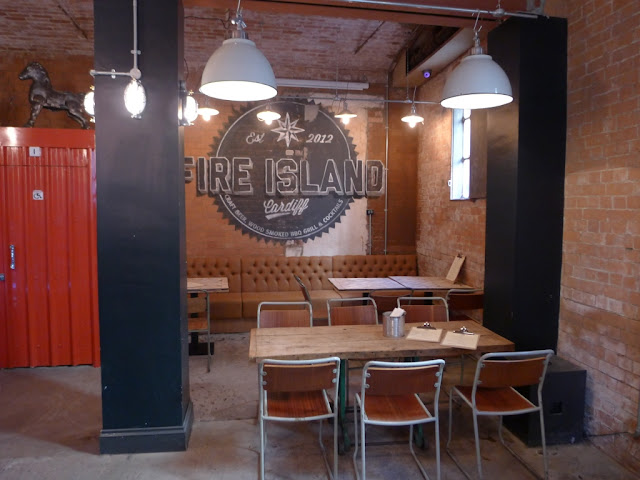 Barbecue has been one of the major UK food trends of 2012. However, it’s something I know chuff all about. And, more than any cooking style it inspires a geeky fanaticism - obscenely long cook times, mystery rubs, secret sauces, and exotic wood mixes are all part its complexity. So, if I drop any BBQ faux pas, I can only apologise. 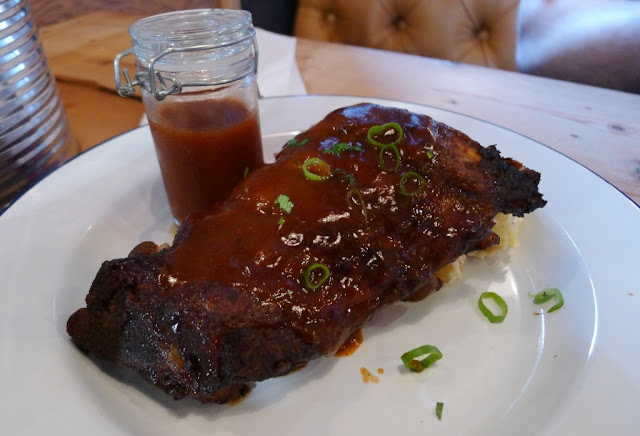 Fire Island is located in the former Glamorgan County Council Staff Club on Westgate Street. They’ve done a cracking job with the renovation and the New York warehouse feel is right on point.

So too is the house beer, Tiny Rebel BeatBox American Pale Ale. And, it’s an exclusive to Fire Island 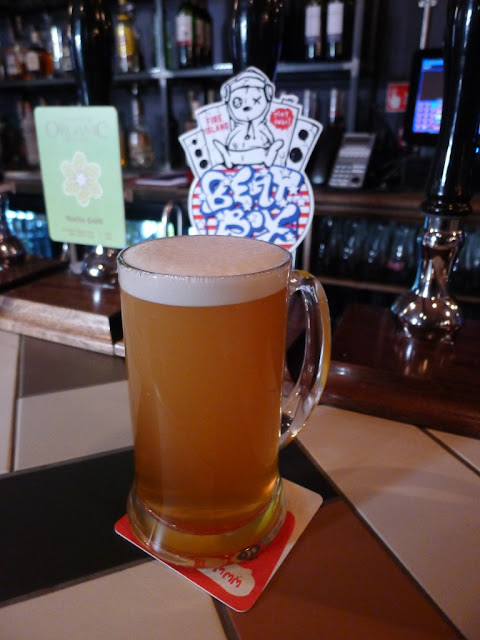 Fire Island’s launch menu is reassuringly short, with a clear focus on BBQ. We were told, it’s going to get bigger and will include desserts. I hope it doesn’t get too much bigger as it reads pretty well already. In spite of this, the addition of desserts will avoid the necessity of a post-lunch cream tea in future… 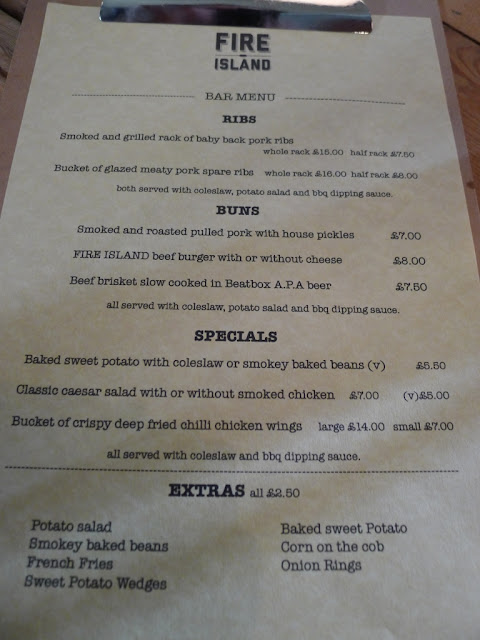 With Rhys “the bottomless pit” as my dining companion, we thought it would be ill-mannered not to order 2 mains each; the danger of this being our food was nearly delivered to a nearby table of 4.

According to our friendly waitress, Fire Island has both a hot & a cold smoker and they make their sauces from scratch. Neither she nor I can shed any more light on Fire Island’s barbecue process.

The ribs were good. A dark smoky crust surrounded the firm & moist flesh of both half racks of baby back pork ribs (£7.50) and pork spare ribs (£8.00). The slather of sticky, sweet and tangy barbecue sauce also had us reaching for a forest’s worth of wet wipes. However, a portion of 4 ribs for £8 felt a little light. Pulled pork (£7) was also delicious. Tender, lightly smoked shreds of pork were coated in some more barbecue style sauce. The generic crispy white roll did its contents a disservice. 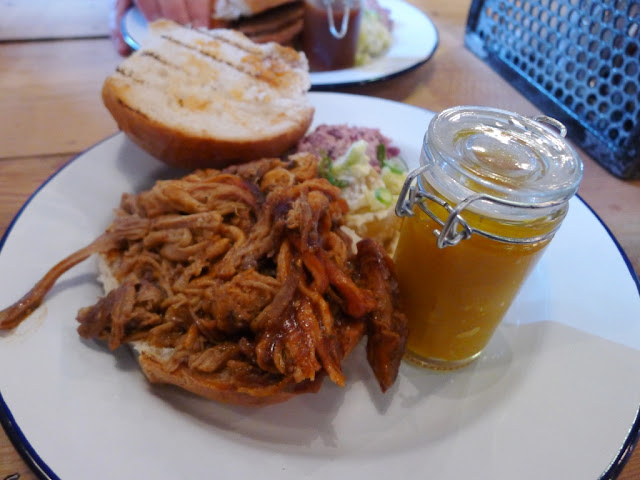 Pretty much everything else can be described as a work in progress. Accompanying coleslaw and potato salad were light on flavour and seasoning.

Soft sweet potato wedges (£2.50) served with a dollop sour cream were highly troughable but needed a good crisping up and a shake of salt. 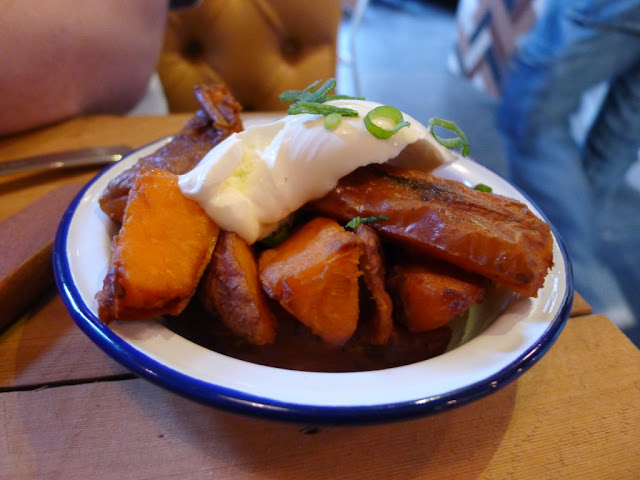 The biggest disappointment was saved for beef brisket slow cooked in Beatbox A.P.A (£8). It looked and tasted a bit school dinner; the slow cooking process imparting neither flavour nor tenderness. 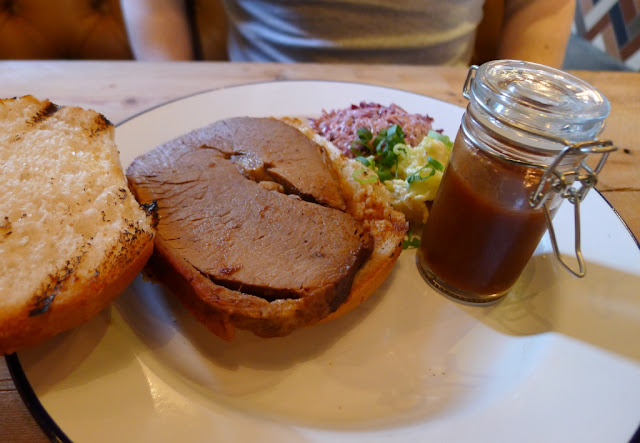 So, how to sum our experience at Fire Island? Whilst lunch was hit and miss, the headline act (the ribs) were rather good. In fact, the prospect of a whole rack and a pint of Tiny Rebel is pretty tempting. It’s just the other details that need to get sorted as this new restaurant beds in.

The details:
Address - Corner of Westgate and Quay Street
Posted by gourmetgorro at 11:10