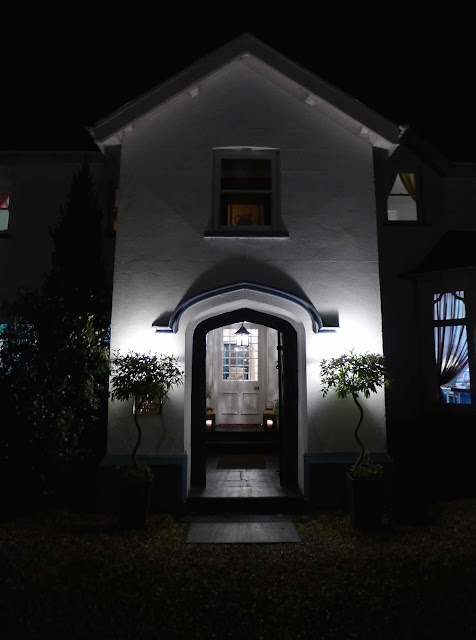 Even the best restaurants in the world aren’t universally adored. As boundaries are pushed with unusual ingredients and challenging flavour combinations it’s likely opinions become polarised.

Recently I read a trio of blogger reviews of the same meal at Noma (currently the 3rd best restaurant in the world in San Pellegrino's 50 Best) - one person loved it and the other two thought it was pretty hit and miss. 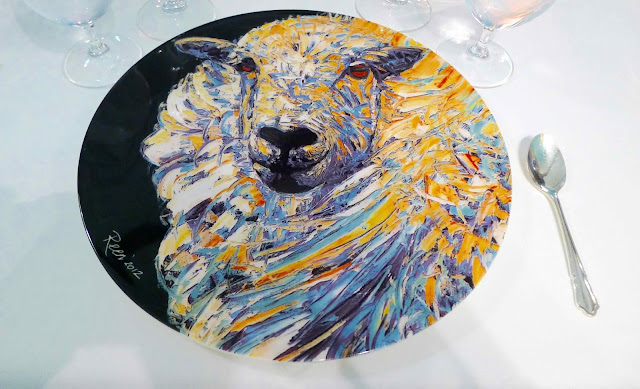 Which brings me to Ynsyhir Hall, a boutique hotel and former home of Queen Victoria, located near Machynlleth on the west coast of Wales.

It’s widely regarded that Ynyshir Hall's head chef Gareth Ward is cooking some of the most innovative food in the UK, with diners travelling from around the county to taste his food. A former sous chef to the two Michelin-starred Sat Bains, Gareth has held a Michelin star at Ynyshir Hall since 2014 and has achieved a ranking of 34 in the Good Food Guide’s top restaurants the UK.

At dinner there are two tasting menus available to non-hotel residents. Both cost £89, are of a similar length and contain almost equally interesting sounding dishes. It was the presence of pork belly, crab and treacle tart that tipped the balance in menu one’s favour.

Pre-dinner drinks were taken in the bar. Mrs G’s classic champagne cocktail (£18) was on the nail whilst a wonderfully citrusy virgin Paloma (£5) meant I didn’t begrudge being designated driver. 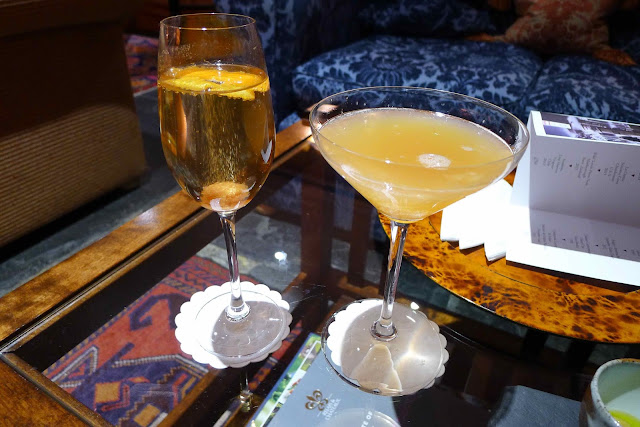 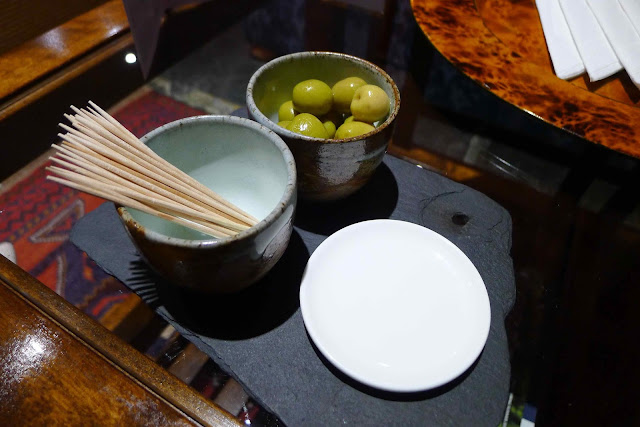 Moving through to the dining room it became apparent that Ynyshir Hall has a thing about sheep - charmingly bright coloured paintings by owner and artist Rob Reen adorn the walls and place settings. 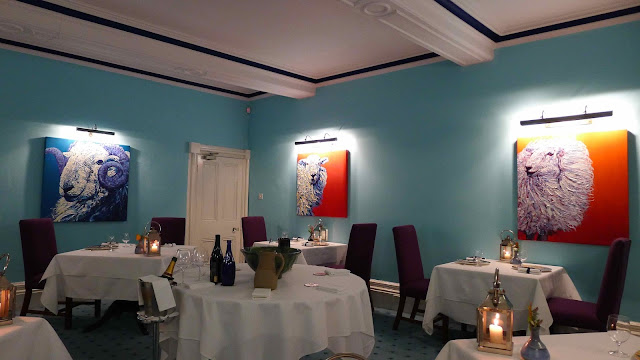 Not French Onion soup kicked off the meal. Intense sweet onion puree combined with a light dashi broth, tofu pieces and croutons. A hefty acidic note was the final taste on the palette. This was a cracking dish. 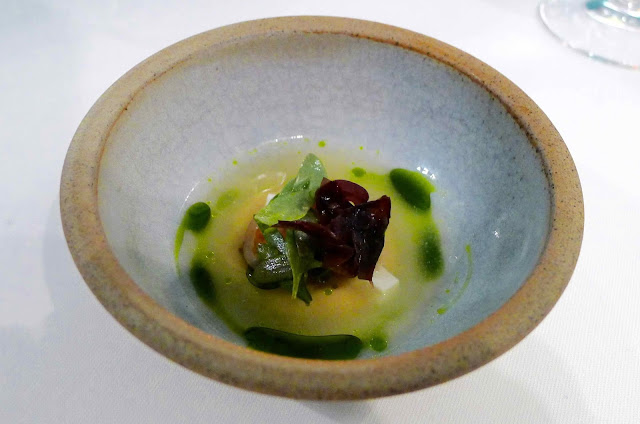 Bread of the highest calibre was next. A slice of bronze-crusted, four day proven sourdough was joined by fluffy-as-can-be and meaty whipped Wagyu dripping. I could have eaten this bread all day long but there was only a single slice. 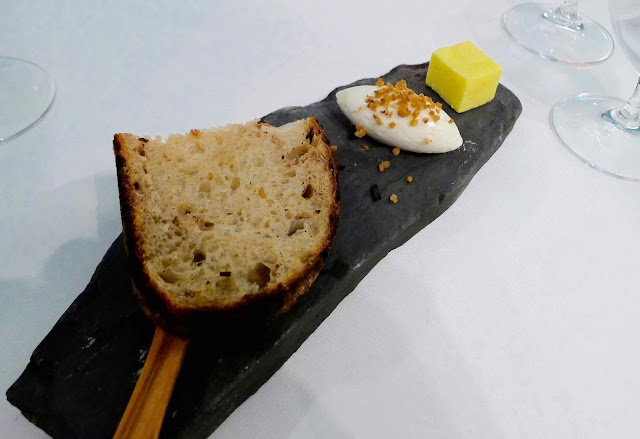 The following course was the first I wasn’t sure about. Potently pickled mackerel pieces were dressed with shavings of al dente rhubarb (I think?), a sweet and glossy rhubarb sauce and snow flakes of back fat. The dominant flavours were sweet and acid. 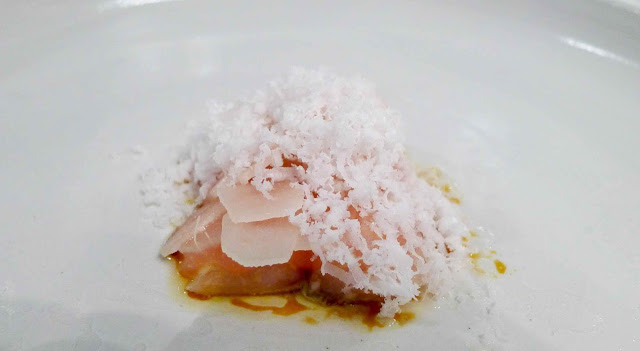 Next up, plump flakes of white crab meat and a puree of earthy brown meat were topped by a wafer thin slice of icy cold pickled turnip. The crab was stonking but once again I wasn’t entirely sold on the strong taste of the pickle. 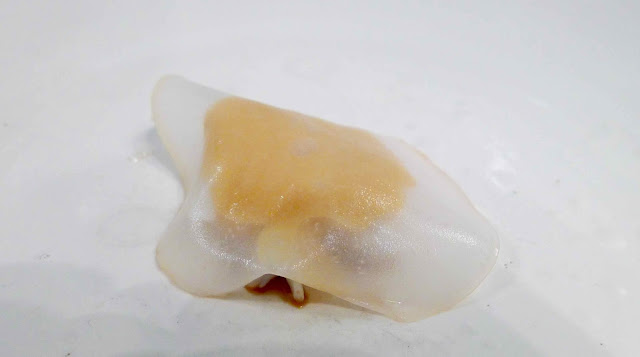 A tepid piece of tender crispy duck, a sliver of salted pear and a blob of cold and viscous sweet and sour shiso plum sauce followed next. The unusual temperatures and textures tasted a little incongruous to me. 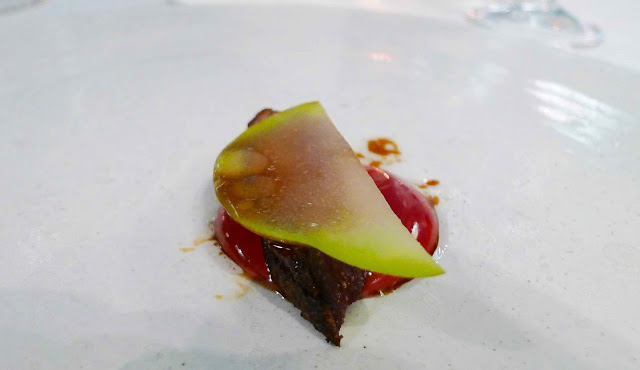 Things picked up in a big way with a dainty Caesar salad that was constructed before our eyes. Lettuce broth and a cube of iceburg were topped by parmesan milk, panko, pancetta and anchovy crumbs, and shavings of dehydrated egg yolk and aged parmesan. Intense and indulgent, this was a Caesar salad dialled up to eleven. 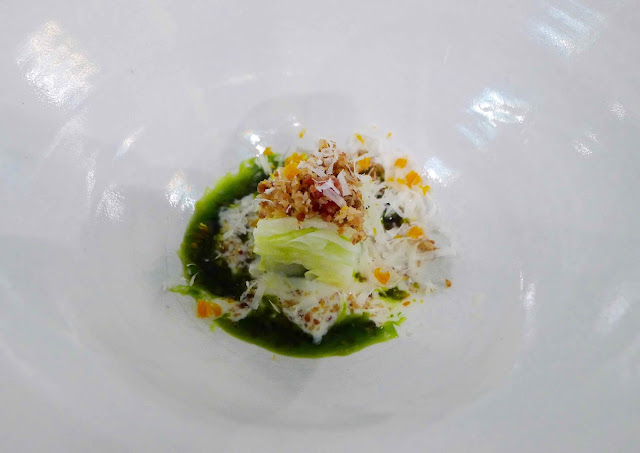 I liked the next dish a lot too. A super tender piece of pork belly was topped with a silky black bean sauce and toasted grains. 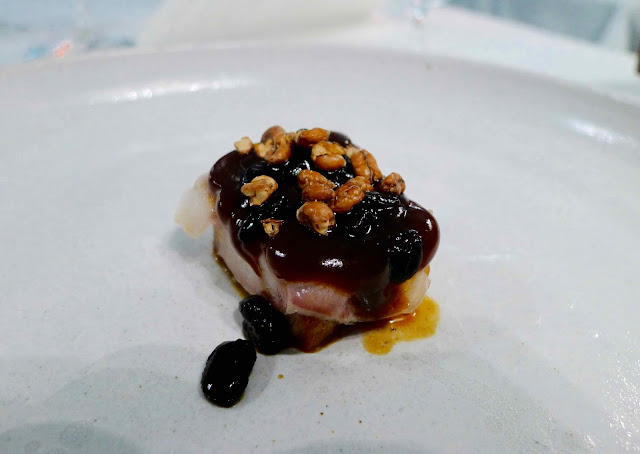 A super-cool looking salt-baked swede jack-o-lantern was then brought to the table which filled the air with a distinct turnipy aroma. 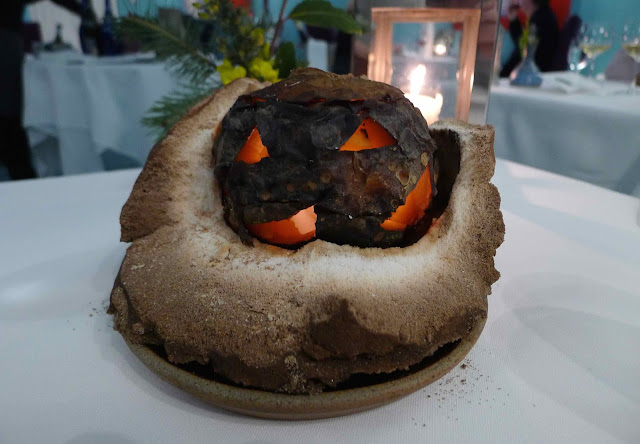 We were presented with a piece of soft sweet-baked swede accompanied by creamy back fat mayo and shavings of pickled swede. A cup of refreshing ice cold swede juice was served on the side. This was a really interesting dish but it's not the kind of food I dream about on a wet winter's night. 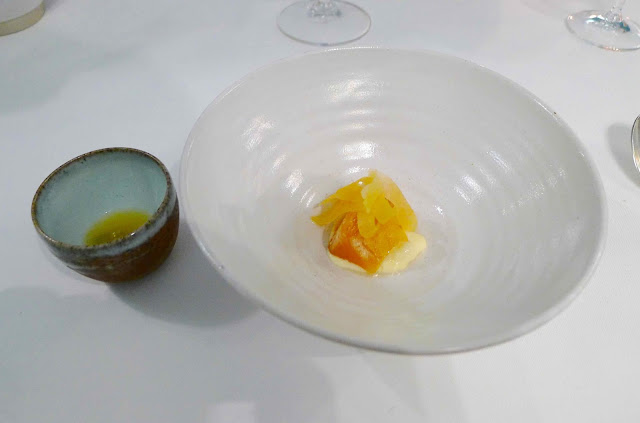 The final meat course was similar to many which had come before - this time, a tender piece of partridge, a sweet puree, crisp grains and strong cold acidic pickled cabbage. 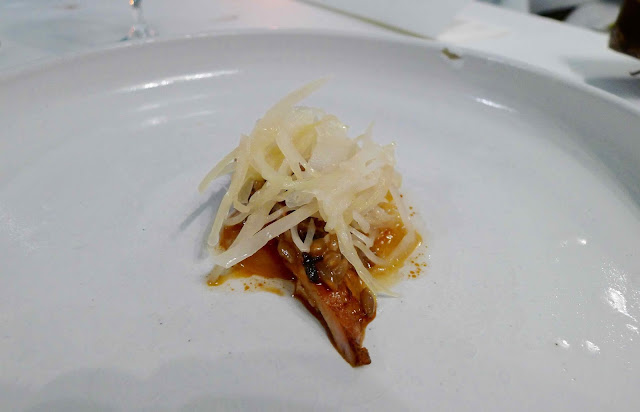 We ordered the cheese course at a supplement (£6.50). A light and savoury Beauvale blue cheese mousse was balanced by crisp croutons, soft and sweet long-cooked onion pieces and a kick of acid. It was frigging lush. 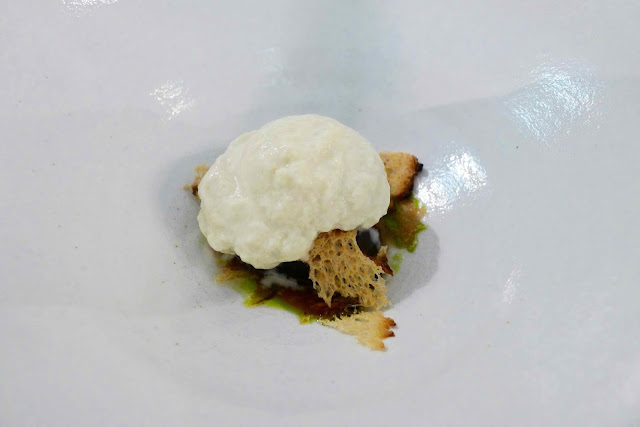 First up was Hendricks & Tonic. From what I could guess, this was a cereal flavoured frozen parfait topped with a vivid-green cucumber and tonic flavoured tapioca like substance. I couldn’t stand the texture of the green topping. In contrast, this was one of Mrs G's favourite dishes of the night. 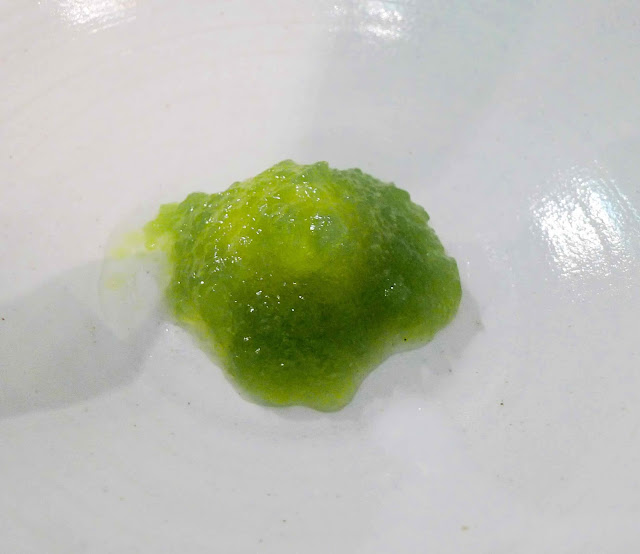 I almost loved the next dish whilst Mrs G hated it. A warm treacle tart filling twanged with miso was joined by crunchy croutons, home-soured cream and a cleansing sake granita. I wasn’t completely sold on the presence of miso in a sweet dessert. Mrs G meanwhile felt the sour cream was way too strong. 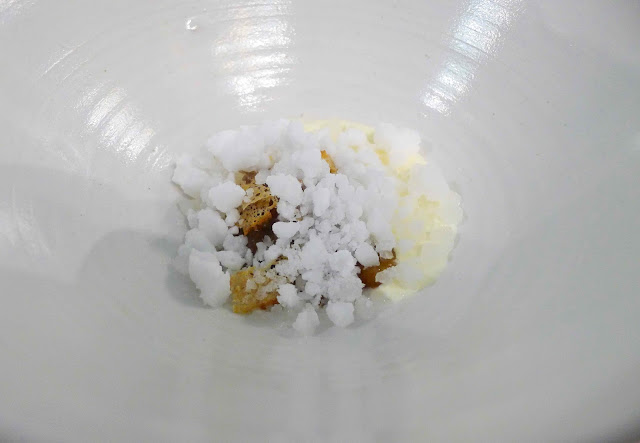 A cuboid of aerated 64% dark chocolate was topped by blobs of a sweet cream and shavings of earthy and funky dried shiitake mushroom. It all worked well together at first… but then the mushrooms lingered and lingered on the palette. 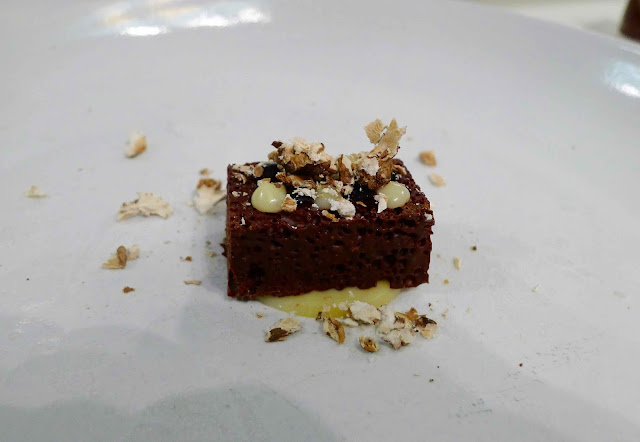 I initially loved the last pudding as well. Rhubarb jelly, custard and crisp puffed rice were topped with a beautiful looking marjoram and rhubarb granita. The classic flavour combination of rhubarb and custard kicked ass until the soap-like marjoram taste took over. 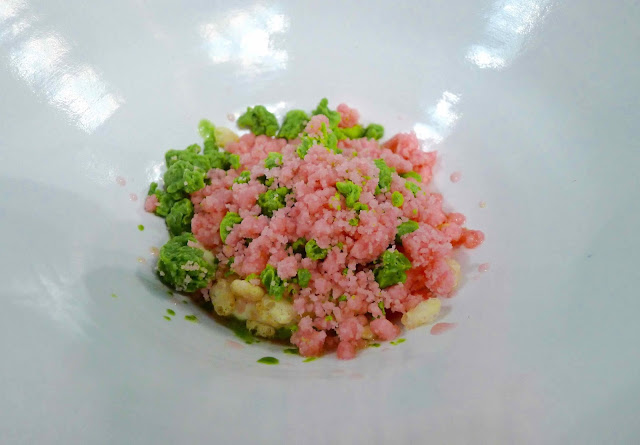 Instead of petit fours we were taken through to the kitchen where we chatted to the chefs and were served a quick frozen white chocolate mayonnaise filled with cumin cream. Crisp, aromatic and icy cold, I loved it. 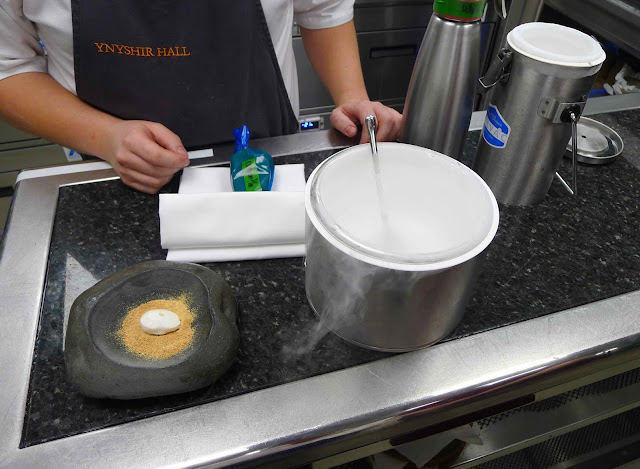 There’s really innovative stuff going on in the kitchen of Ynyshir Hall - more so than anywhere else I’ve eaten in Wales. I loved some of the dishes, thought some were ok and some weren’t my cup of tea at all.

However, way more influential people than me have fallen in love with the food at Ynyshir Hall. Furthermore, it's a beautiful place to eat and the serving team are first rate. So, don't trust me and go and find out for yourself.