Eight great places to eat and drink in Cardiff Market 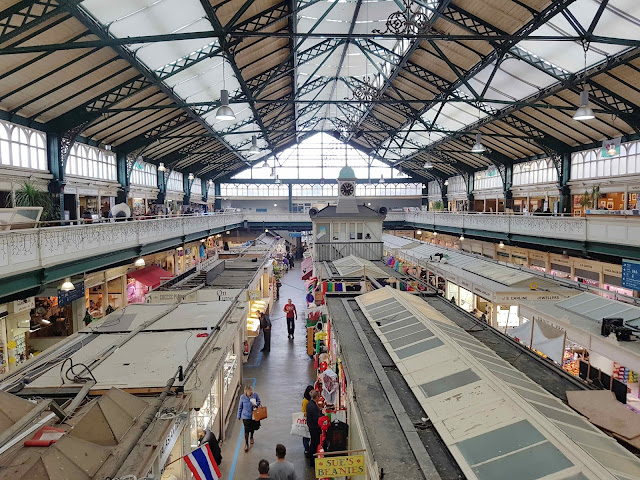 It’s great to see the renaissance of Cardiff Market.

This beautiful Victorian building located in the heart of the city has great produce stalls like E.Ashton fishmongers and JT Morgan butchers. But, it’s increasingly gaining the food stalls that make the central markets in cities like Lisbon and Barcelona such magnets for visitors. It would be great to see communal seating and an on-license booze trader in the market push things on even further.

Here are my picks of the places to visit in Cardiff Market for a tasty bite to eat and a drink. 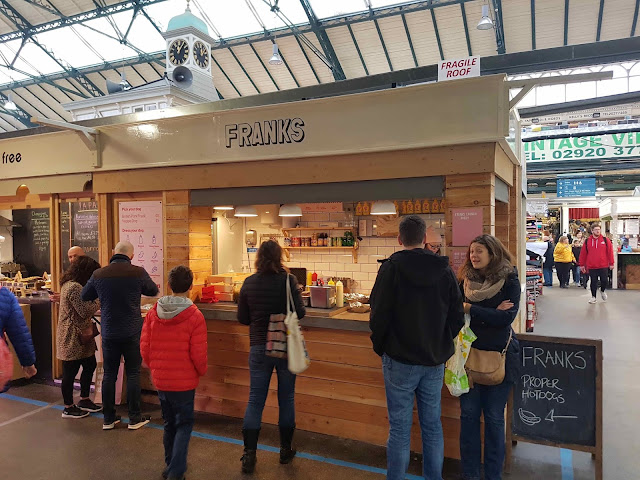 The Two Anchor’s team now hold the title of Cardiff’s best gourmet hot dog thanks to their new venture, Franks. They’ve done it by focusing on the fundamentals - a brilliantly snappy-skinned, juicy and lightly-smokey Grid Iron outdoor reared Gloucester Old Spot frankfurter was a banger of a banger. Whilst a golden-crusted and airy-crumbed brioche bun from Friends in Knead was light yet sturdy enough to carry its payload. 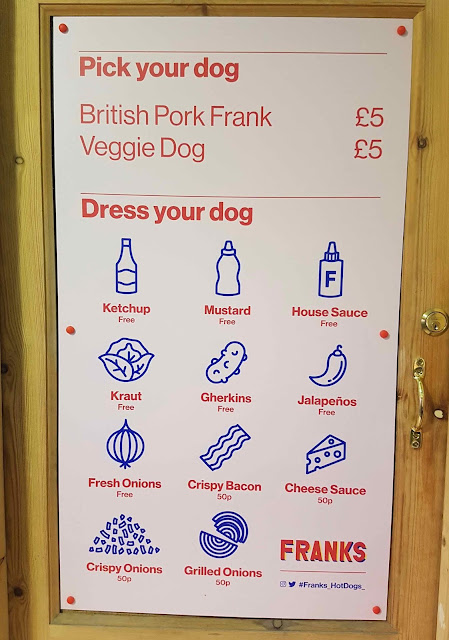 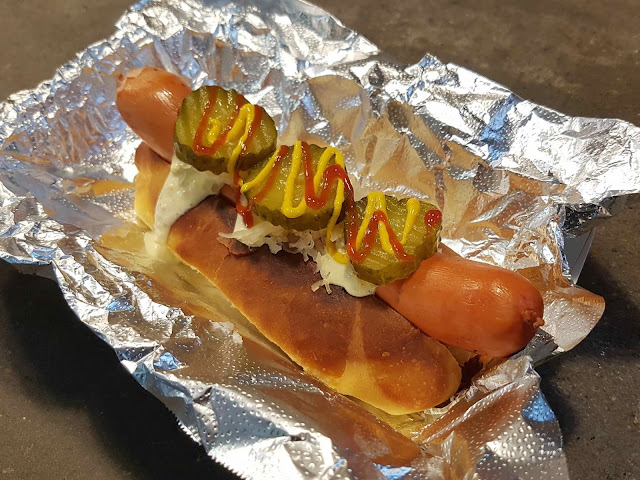 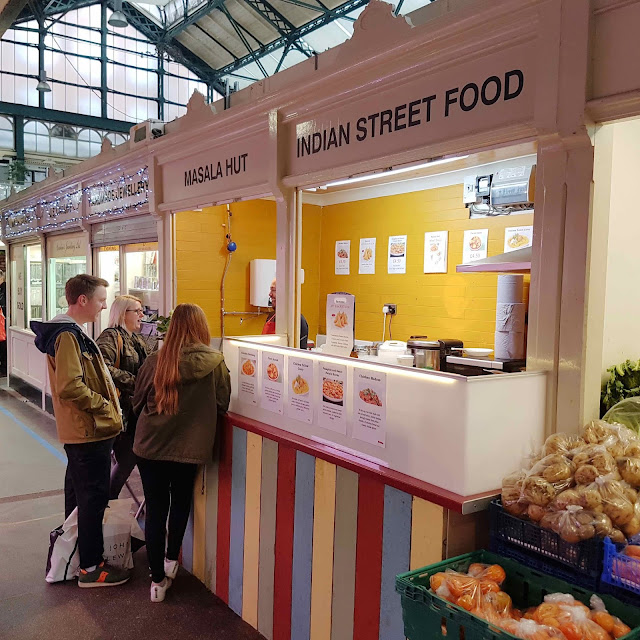 Masala Hut serves big-flavoured, well-priced and generously portioned Malaysian and Indian curries. When I asked the friendly owner which curry he recommended, he gave me a sample of them all to try! 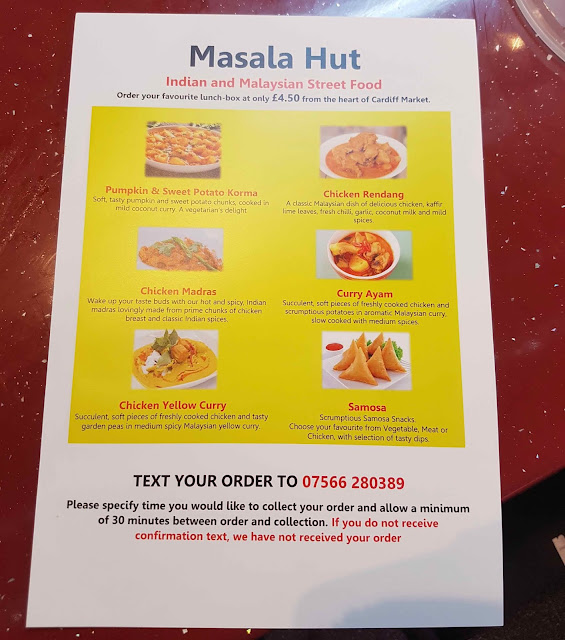 Whilst they were all lovely, my favourite was a medium-spiced chicken rendang packed with creamy coconut, spicy chilli and a fragrant mix of kaffir lime leaf and ginger. £4.50 bought a groaning bowlful loaded with meat, sauce and sticky rice. You get a heck of a lot of bang for your buck and you can also upgrade to a meal deal for £6 to include a drink and homemade samosas. 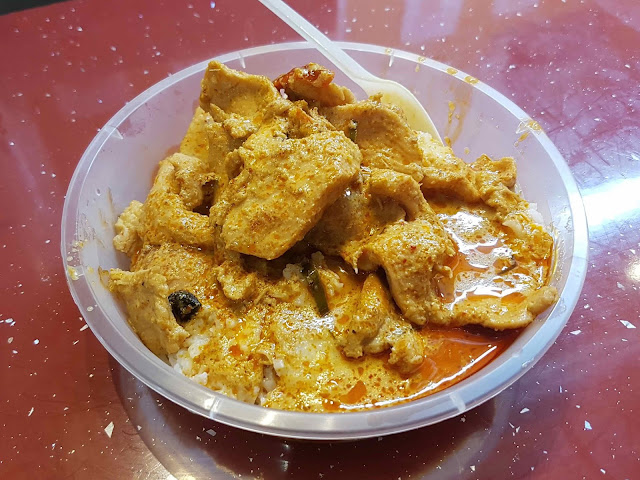 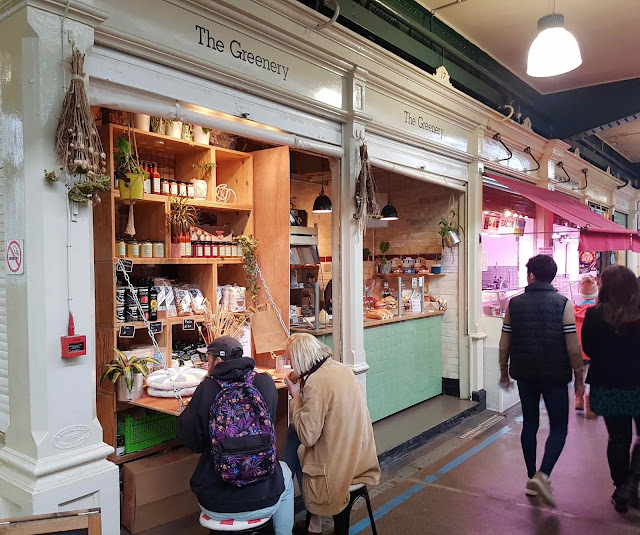 Located on the former site of Milgi Market, The Greenery serves modern global Vegan food. From toasties and sandwiches to soups, freshly baked cakes and daily specials, everything looks full of colour and flavour. 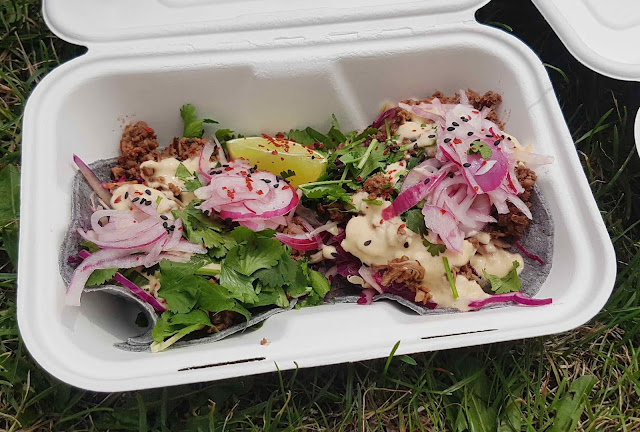 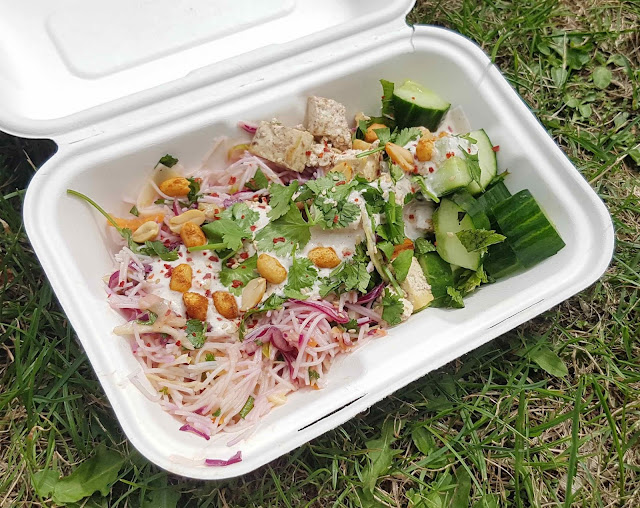 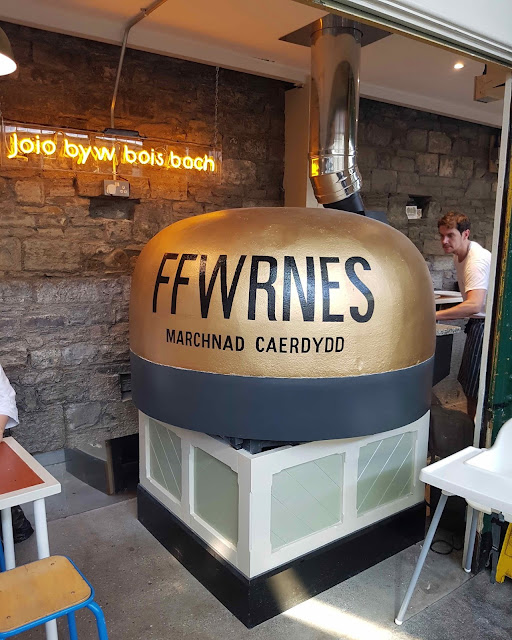 Ffrwrnes started out selling their Neapolitan pizzas from a three-wheeled van called Smokey Pete. Their first bricks and mortar restaurant opened in the market in August 2018.

A compact menu comprises five meat free pizzas and three meat pizzas which weigh in at a very reasonable £5-7.

A margherita (£5.50) showcased the quality of Ffwrnes’s ingredients - a soft and thin mottled base was topped with light and fresh San Marzano tomato sauce, creamy fior di latte cheese and leaves of metallic basil. 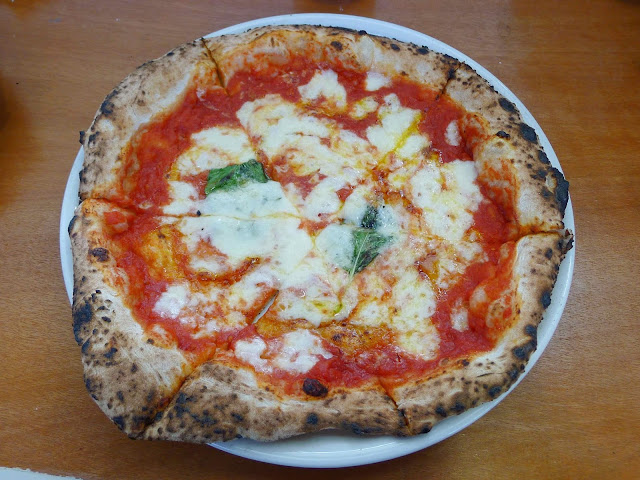 A Jiawl Bach (£7) saw the addition of crisp and spicy pepperoni and slices of fiery chilli. 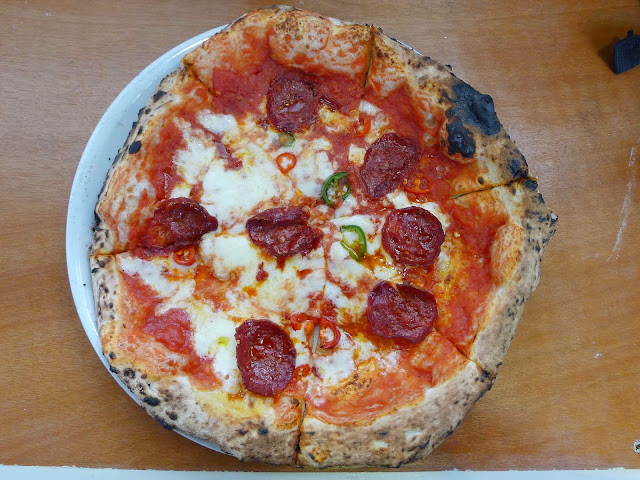 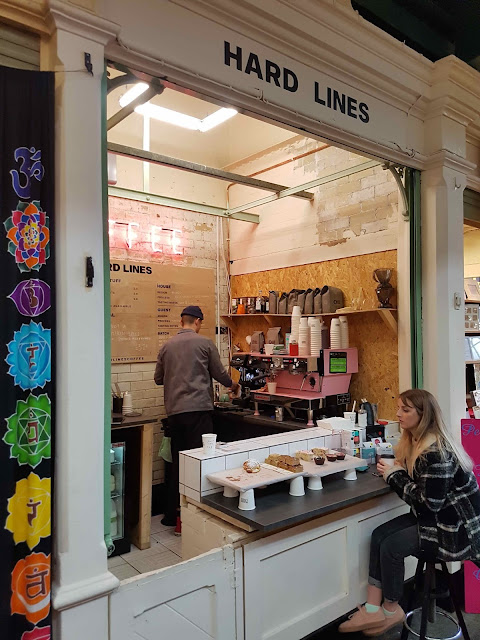 Formerly known as Outpost, Hard Lines serve one of the best cups of coffee in the whole of Cardiff. Expect single origin beans from the best suppliers, flawless latte art and tasty snacks from Alex Gooch and Flapjack Nation. 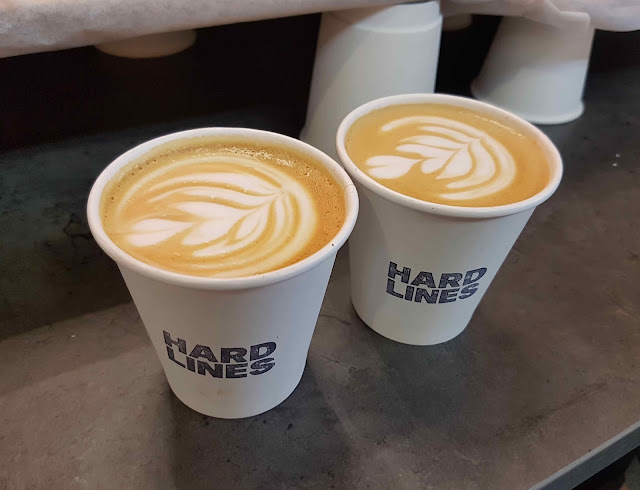 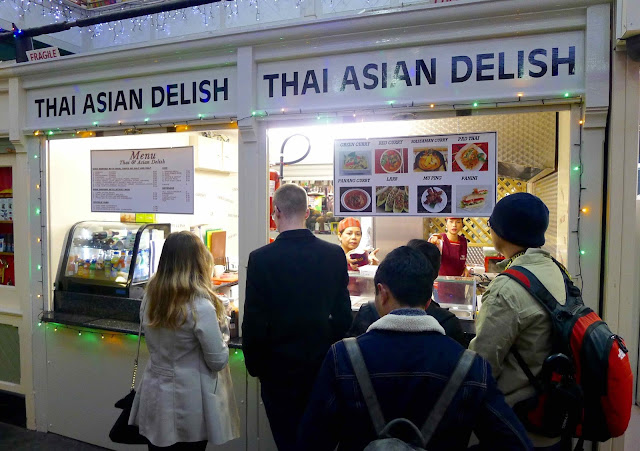 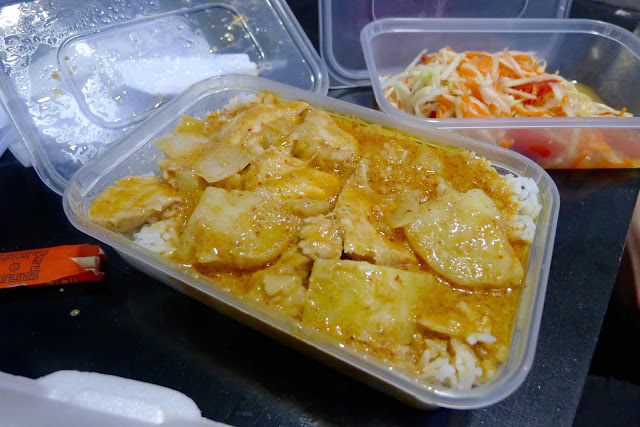 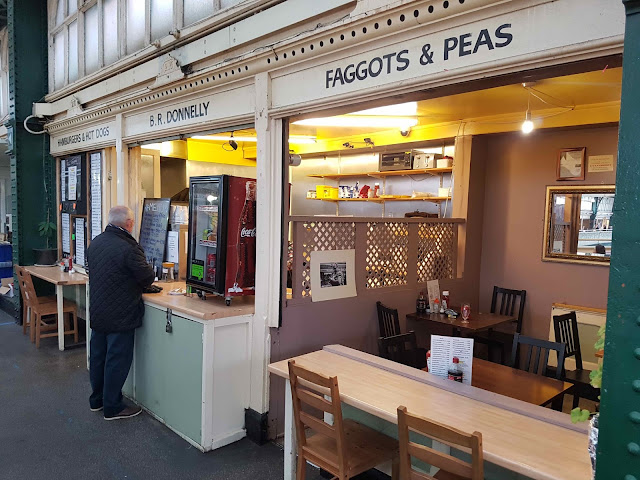 I love faggots and B.R.Donnelly, an old skool greasy spoon cafe, serves some fine examples. Faggots, peas, chips and bread and butter will set you back a mere £3.80. A rich and offaly faggot comes perched a top a pile of crisp chips and proper marrowfat peas. Thick gravy (I think it may be Bisto but Mrs G thinks it’s a cut above) and a slice of soft pappy white bread complete the dish. 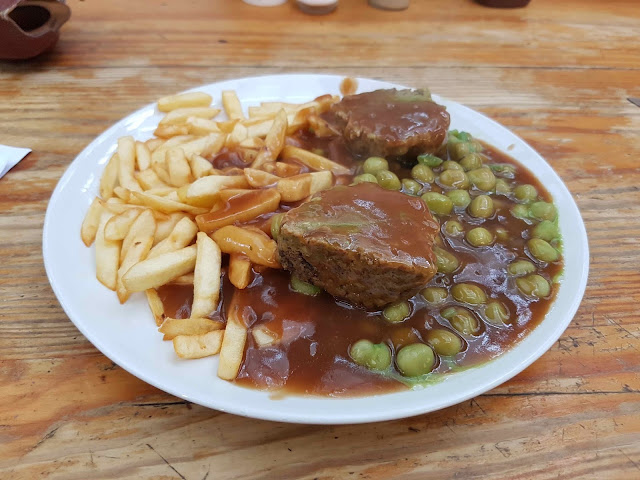 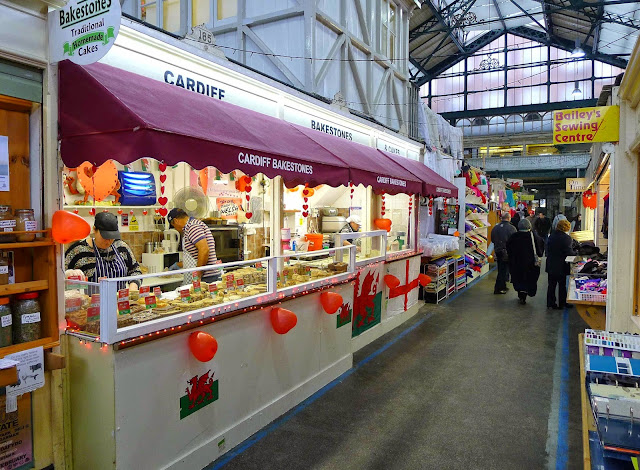 The Welshcakes from Cardiff Bakestones are frigging lovely and an absolute bargain too. Ask for what’s fresh off the bakestone as they’re at their very best when they’re still warm. 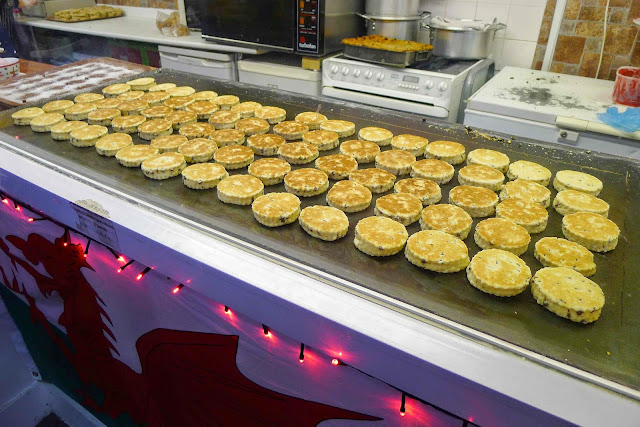