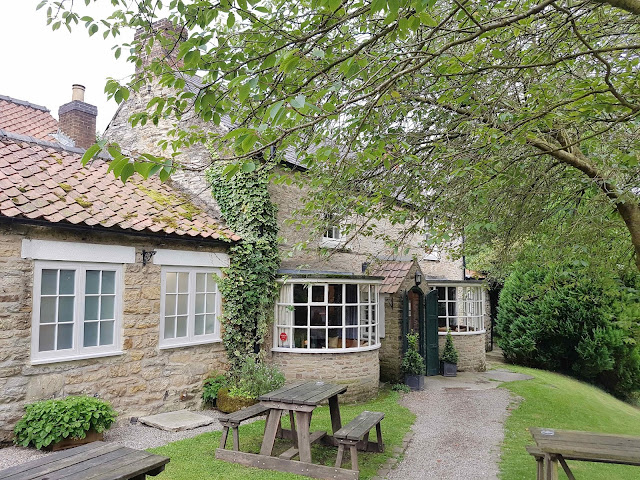 At the Black Swan at Oldstead in Yorkshire they really take the concept of sourcing locally to heart. In fact, almost all of their fruit and vegetables are grown in a two-and-a-half acre kitchen garden behind the restaurant, foraged from the surrounding countryside or at a push shipped in from the family farm down the road.

It makes for food which has a sense of place like few others I’ve visited in the UK. 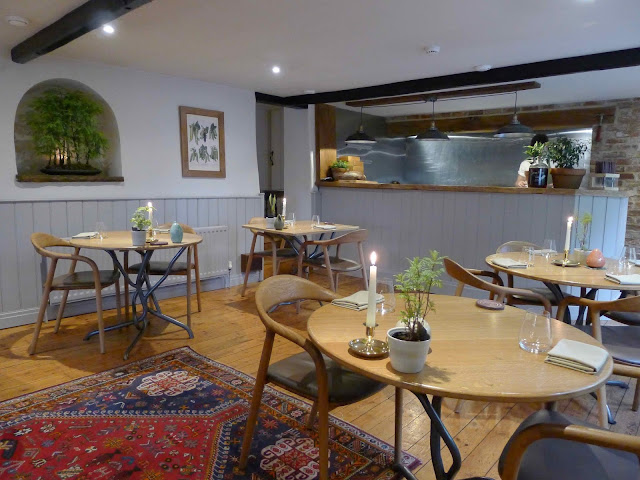 The Black Swan is owned and run by The Banks Family. Son Tommy, the head chef, is a familiar face from his multiple banquet winning dishes on Great British Menu. He was also Britain’s youngest Michelin-starred chef at the age of 24 and the restaurant was named Tripadvisor’s ‘Best Fine Dining Restaurant in the World’ in 2017 (I can’t decide if that’s a good or a bad thing).

The Black Swan offers just one tasting menu. It’s £98 to £125 depending on the night of the week you visit (£110 on the Sunday night we went) and you pay for your dinner upfront via a website called Tock. I’m all in favour of this kind of system - you wouldn’t expect to pay for a ticket to a football match or a concert at the end of the night. 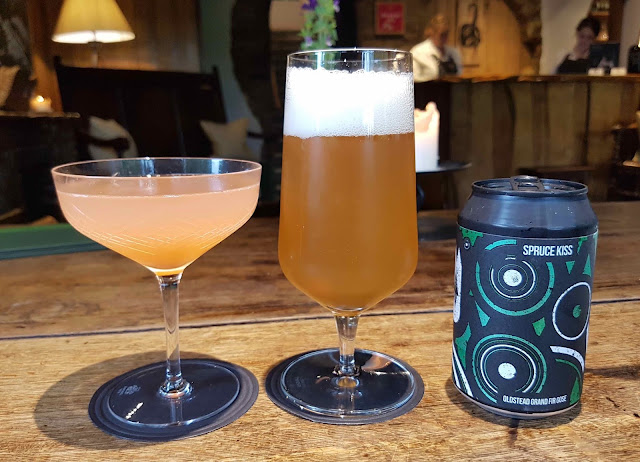 A fine cep-infused pastry case was loaded with earthy pickled hen of the woods mushrooms and an intensely cheesy and airy Lincolnshire Poacher custard. Thanks to a mistimed breath out, I managed to spray half of the dusting of savoury and smokey dehydrated scallop roe across the table! 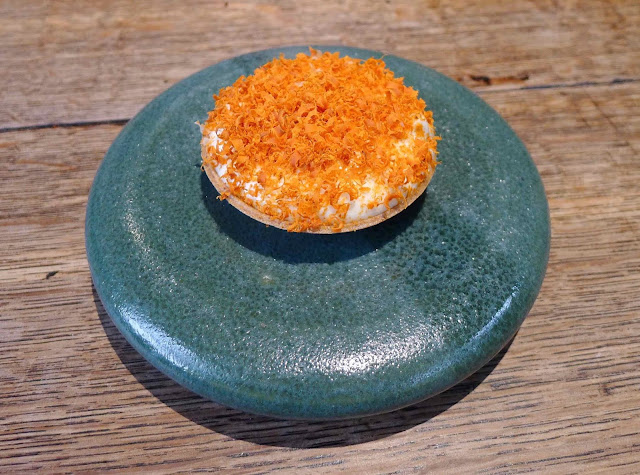 White crab meat bathed in delicately warming horseradish buttermilk was accompanied by sweet peas and pea puree and topped with airy hollandaise rich with brown crab meat. Served cold it was a lovely light start to the meal. 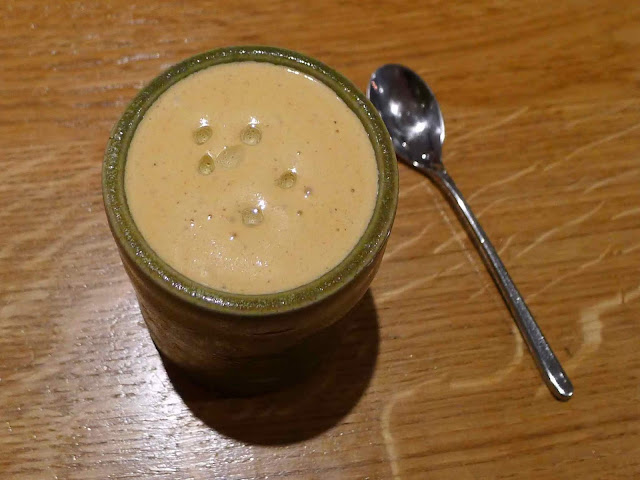 Next up was a unique take on a familiar flavour pairing. Salt baked beetroot pieces had been dehydrated and then rehydrated in beetroot juice to give them a bonkers wine gum like texture. They were paired with the tart zing of redcurrant and blackberry juice and a creamy ice cold goats cheese granita. 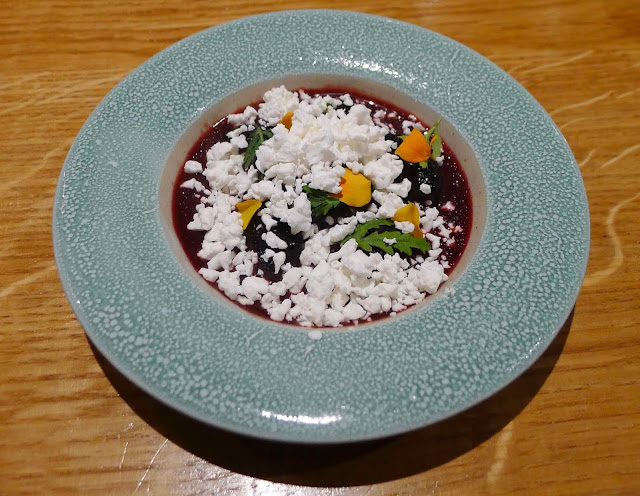 Sourdough bread, brittle and burnished of crust, was joined by cultured butter with a compelling slightly sour and almost cheesy complexity. 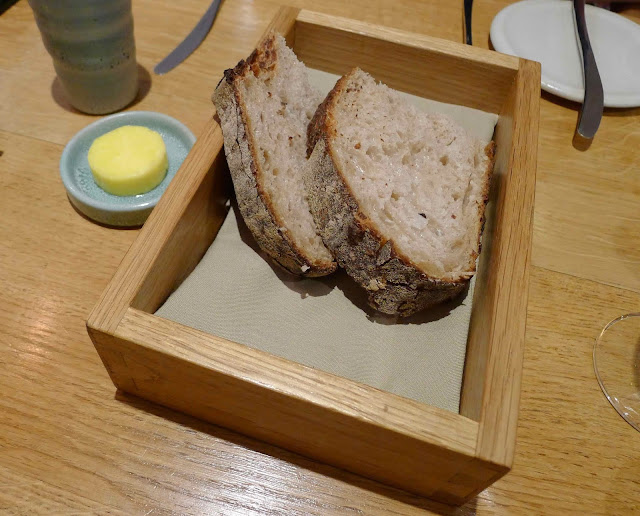 Pieces of Oldstead deer had been lightly smoked and coated in a gently spiced homemade fermented chilli sauce. Topped with the crunch of a rye cracker, acidity of baby pickled onions and herbal hit of wood sorrel this was a next level tartare. 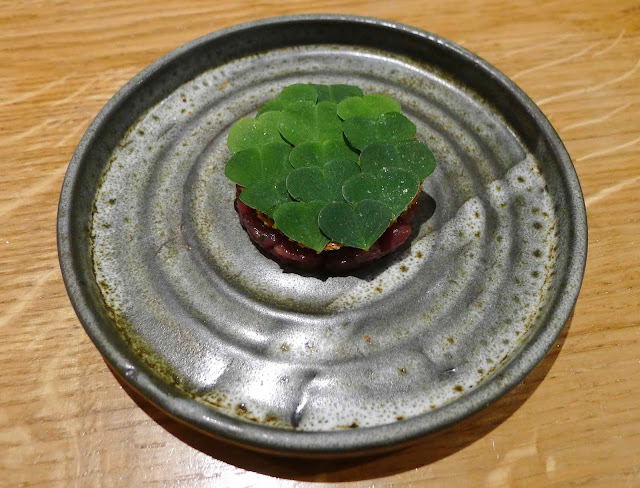 This dish was paired with a collaboration beer made especially to go with the raw venison, a smooth and slightly sweet Slocken Hefeweizen from Bad Seed Brewery. 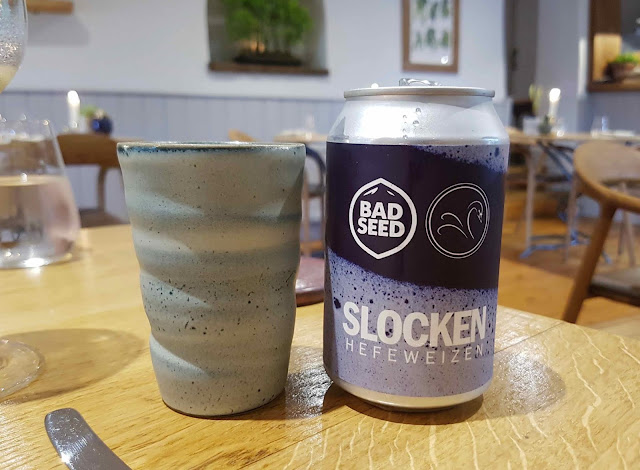 A king scallop was the best I’ve ever eaten. The golden-crusted and sweet-fleshed behemoth was sat atop fragrant yet tart green strawberries, a rich spruce butter sauce, salty samphire and balancing pickled turnip puree. 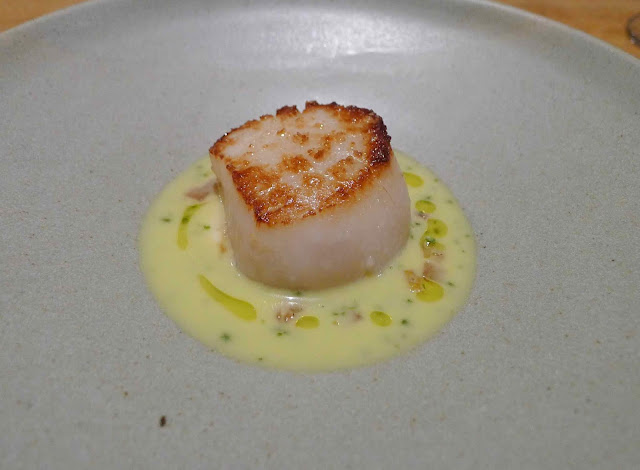 A delicately steamed fillet of turbot was sweet of flesh but a little tense in texture. It was shown up by its accompaniments, a whopping flavoured shellfish broth, tart pickled gooseberries and onion petals with a beguiling hit of smoke due to a good charring of the allium’s exterior. 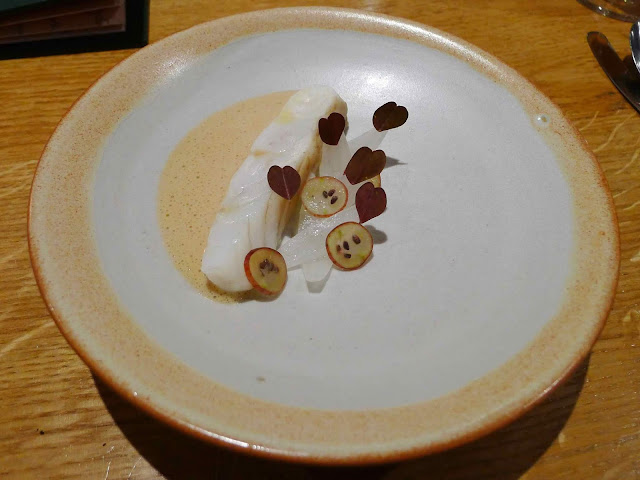 A tender spud with a smoky barbecue note was heaped with an indulgent dollop of caviar and sat in sour fermented celeriac juice which was cleverly tempered by the richness of cream and the potent herbal hit of dill oil. 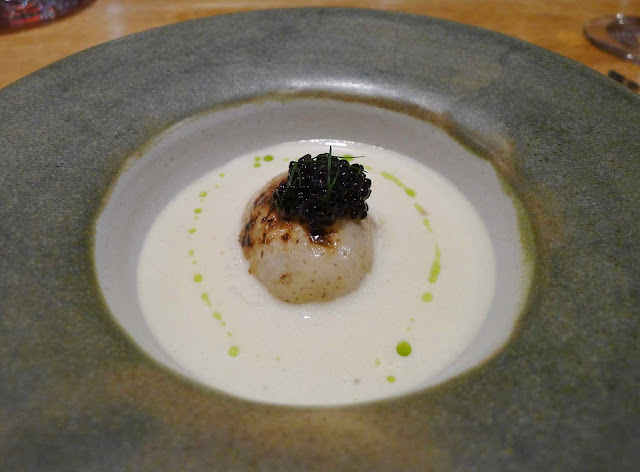 Lovely flavoured but not the most tender lamb rack was accompanied by a killer sweetbread coated in a crisp crumb twanged with garlic and onion. It was joined by top drawer silky courgette puree, more of those lovely sweet peas, girolles and a mint gel. 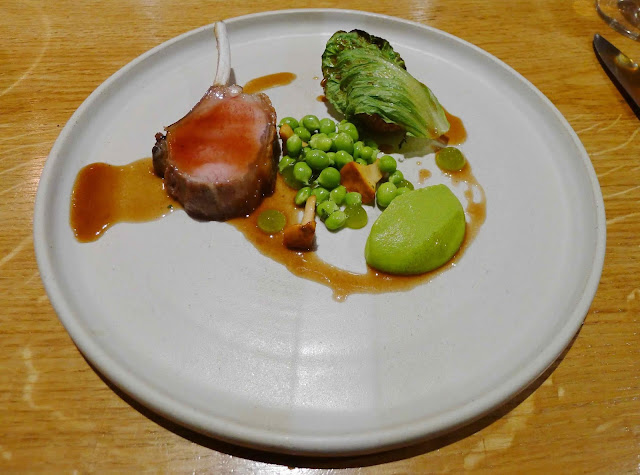 I’ve got all the time in the world for an ice cream sandwich (especially Maxibon) and the Black Swan’s is as good as it gets. Fragrant raspberry parfait and clotted cream rich elderflower parfait were sandwiched between a super crisp buckwheat praline brittle. A clever yet delicious herbal hit was delivered by sweet cicely creme patisserie and leaves. 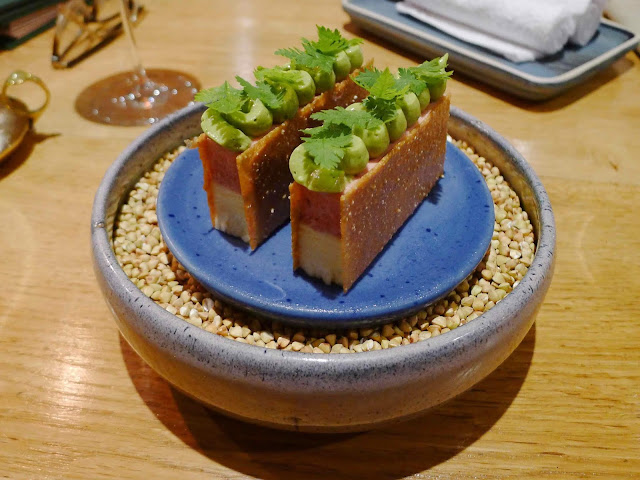 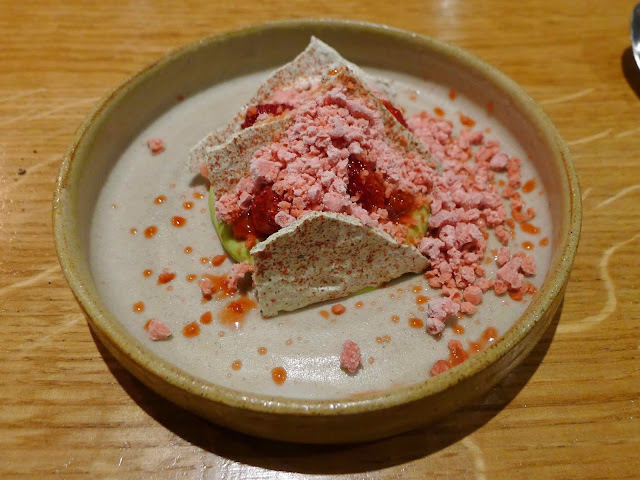 There’s nothing to see here, just coffee, caramel, crumble and custard. In fact this dish was way more wacky than its decadent flavour combination suggested. “Chicory and Potato” combined chicory crumble, coffee-like chicory ice cream, chicory caramel with a lovely bitter note, and a light potato custard with no hint of spud, the thickening properties of the potato’s starch taking the place of egg. 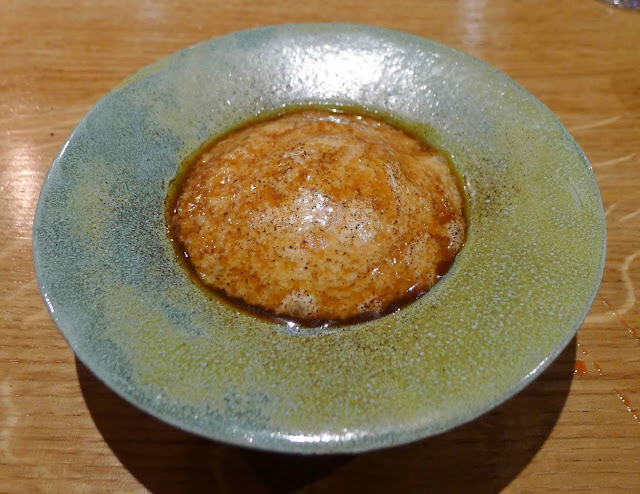 The final dish of “root vegetable toast” sounded equally savoury and odd. It really wasn’t; it was frigging lush. Dehydrated carrot, celeriac and beetroot had been rehydrated with rum and baked into a light panettone style bread before being soaked in apricot schnapps custard, coated in sugar and brûléed. Served with tangy crème fraîche, this was the best French toast ever; the root vegetables providing an extra note of complexity. 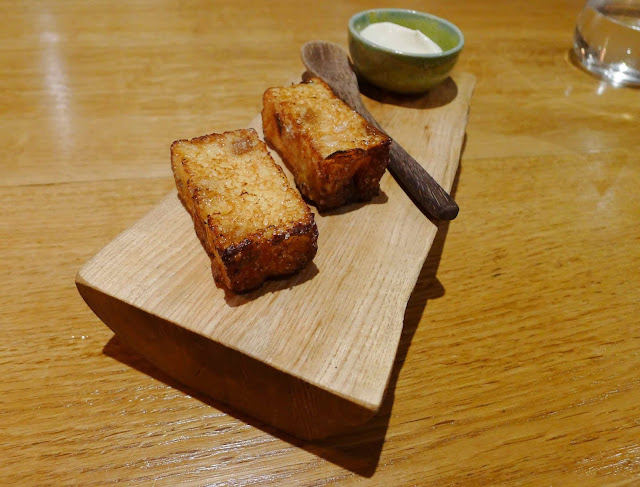 We had a smashing dinner at The Black Swan at Oldstead. With its first class fruit and vegetables, comforting flavours and innovative techniques, I can see why it’s lauded so highly.