The Biryani Pot and a few other places to eat in Stroud, Gloucestershire 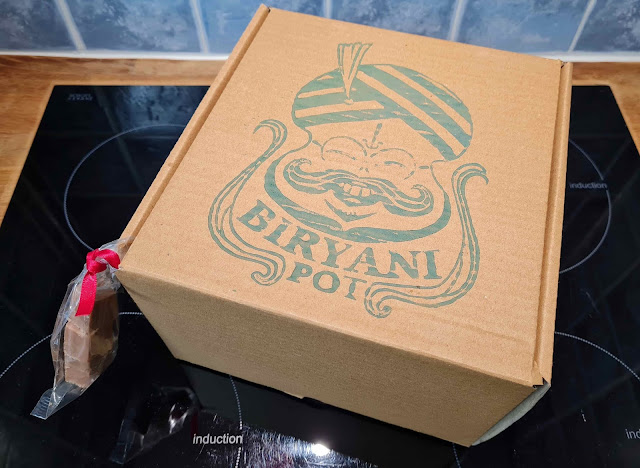 The Biryani Pot in Stroud is one of those canny takeaway and home delivery businesses that have arrived during the pandemic. Owned by chef Gautam Kaila, he’s the head pastry chef at Bath’s Fine Cheese Company, former head pastry chef at the luxury Calcot Manor, and has years of experience cooking in high end kitchens in India.

Specialising in Hyderabadi dum style biryani, the lengthy cooking process involves marinading meat for over twelve hours before sealing it inside a traditional clay pot alongside rice and fried onions and cooking it low and slow for a number of hours.

Chicken, goat (sold out when we ordered), vegetable and vegan biryanis are available in either single pots (£12.95 - £15) or large pots (£40 - £46) to preorder only and they’re open for collection or delivery (£2 in the Stroud area) from Tuesdays to Sundays.

Biryani Pot’s food is packaged with a level of care and attention to detail that is almost without compare. A creatively branded card box nestles a trio of clay pots - the pastry sealed biryani pot and a pair dinky accompaniment pots. Impressively, the food tasted even better than it looked. 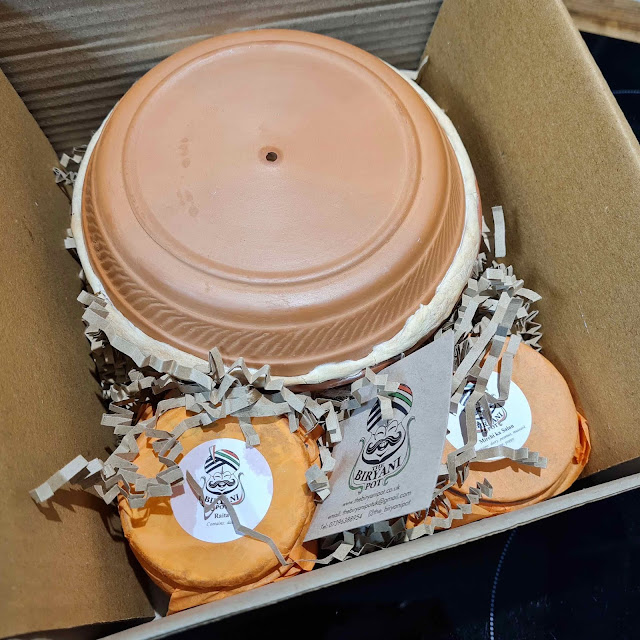 Gorgeously fluffy spice-fragranced rice gave way to brilliantly juicy bone in chicken thigh and drumstick, and then denser rice tangled with an intense spice-layered sauce thickened with sticky caramelised onions. I’m not sure exactly which spices put in an appearance but I detected the warming, comforting flavours of star anise, cardamom, pepper and cinnamon. 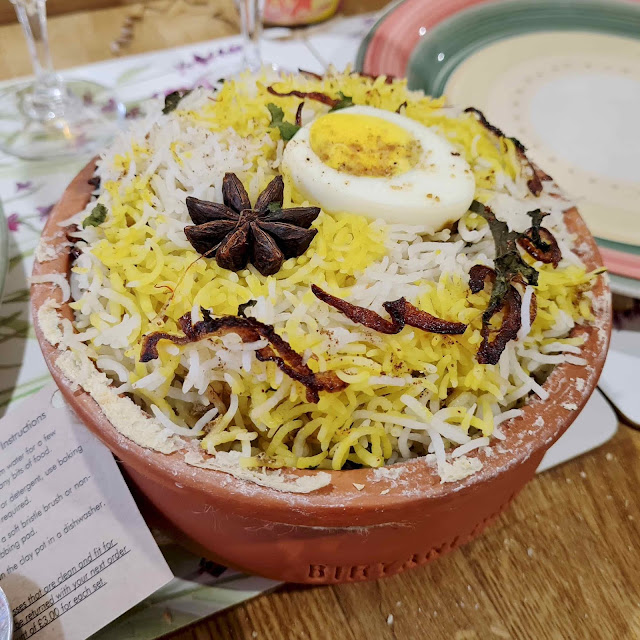 The biryani was elevated even further by its sides - creamy and tangy yoghurt raita studded with cucumber and jewels of pomegranate. 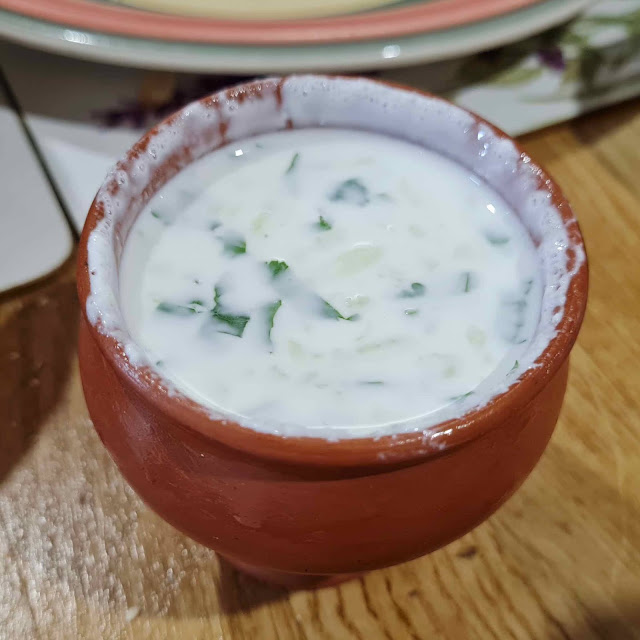 And a mirchi ka salan, a creamy and nutty gravy made with peanuts, sesame seeds, tamarind and coconut, which thrummed with spice and chilli. 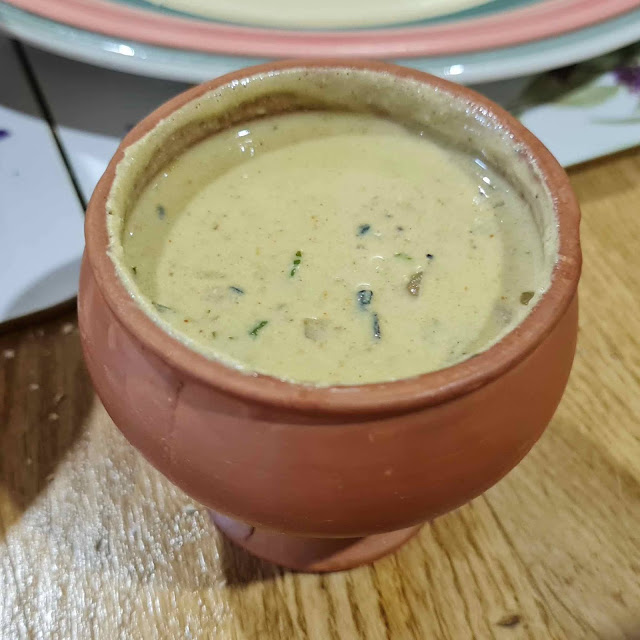 It's worth saying that a single biryani pot is an absolute whopper. We just managed to demolish two pots between us but I was as full to bursting as Violet Beauregarde.

Chef Gautam’s pastry skills were given away by a gorgeous packet of complimentary chai spiced fudge - silky smooth, creamy and soft, it was heady with warming spices. 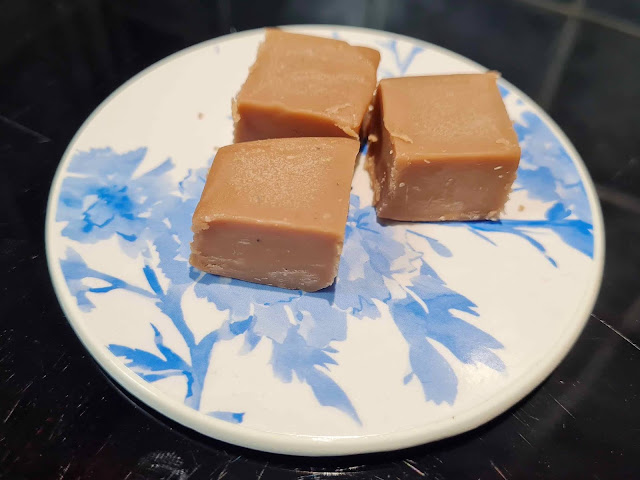 The Biryani Pot is absolutely ace. I hope it's a business which sticks around post-pandemic as I'm already craving another visit to Stroud for one of their delicious biryanis.
The Details:
Web - https://www.thebiryanipot.co.uk/
Telephone - 07396388954
Address - 1 Hill Top Cl, Stroud GL5 1PZ
Other Stroud food highlights

We ate very well during our three day trip to Stroud, with a number of our meals based around supplies from the food market at Five Valleys Shopping Centre. 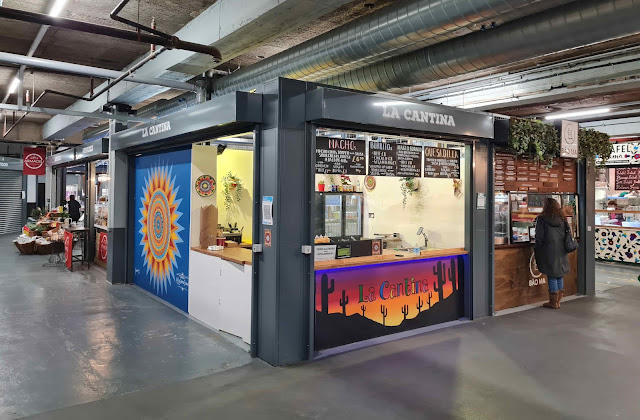 We had excellent falafel pockets from Falafel Mama, laden with crisp falafel, heaps of fresh salads and pickles, silky tahini and punchy mango and coriander salsas. 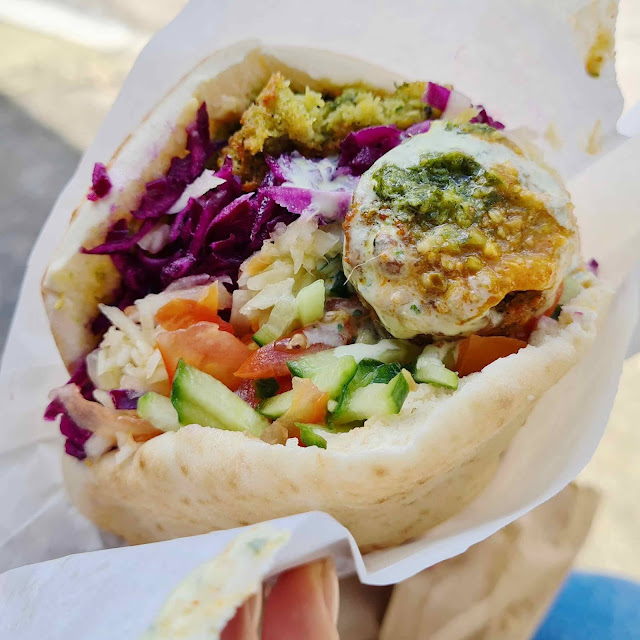 Bao buns from the Singaporean owned Bao Ma were deliciously pillowy and available in a range of crowd pleasing flavours from 48-hour braised pork belly to chicken katsu. We had Korean beef stuffed with tender shreds of meat, crisp slaw, fiery chilli sauce and crisp onions. 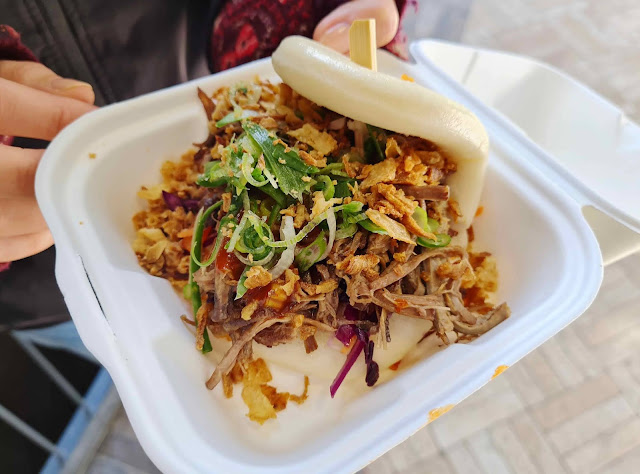 A meaty bolognese and sweet pea filled arancino from Non Solo was reassuringly weighty yet still retained lightness of texture. 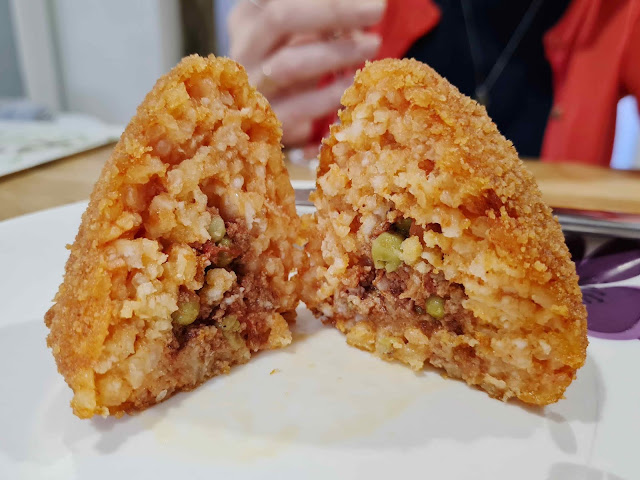 Oakesy’s fruit and veg had some great produce including heritage tomatoes and Wye Valley rhubarb which was delightful roasted up in the oven. 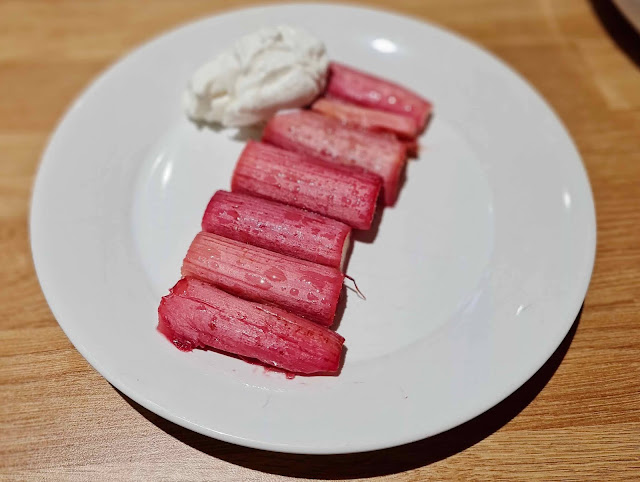 Focaccia from the Artisan Bakery was crisp of crust yet wonderfully airy and soft of crumb with a good soaking of olive oil and dusting of rosemary. 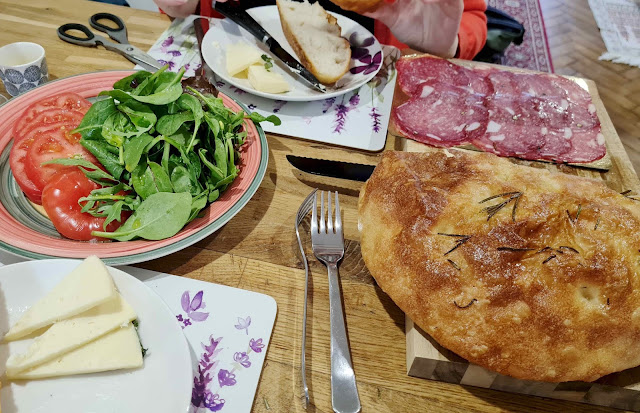 It was lovely with charcuterie and garlic Yarg from Armadeli and a bottle of perfectly citrusy and funky Mills wild beer purchased from Stroud Wines. 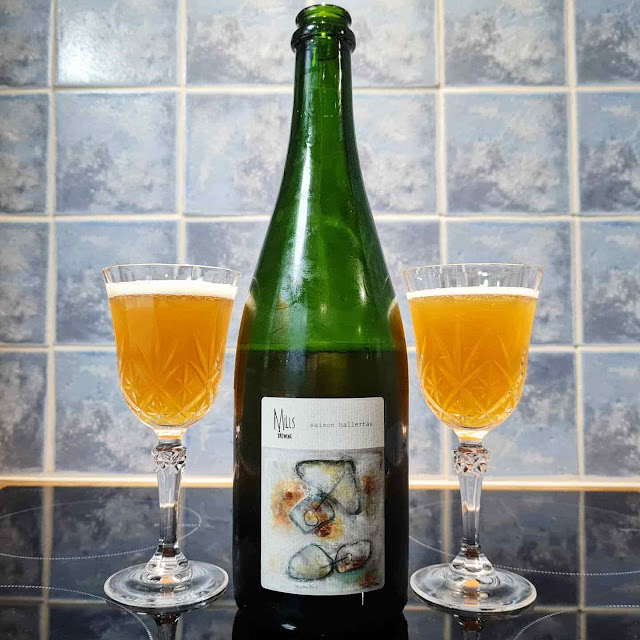 Outside of the food market, we visited the multi-award winning Simpson's where precisely cooked flakey cod was cocooned in golden and seriously crisp-batter. Chips were tasty but not remarkable. 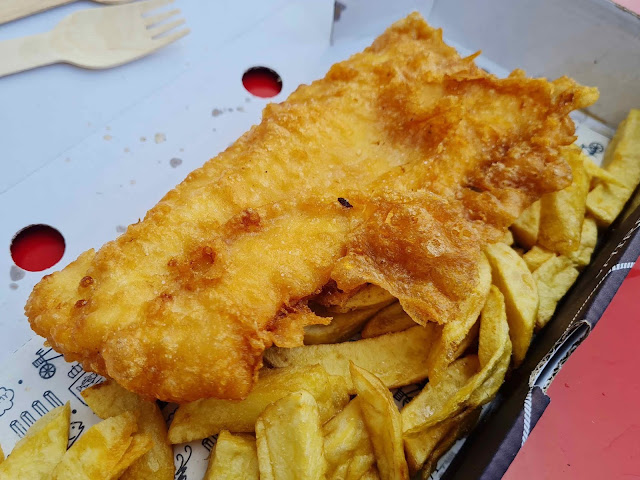 We had a lovely trip to Stroud. It’s a charming little market town with a cool independent food scene, just over an hour’s drive from Cardiff. It's particularly famous for its Saturday farmer’s market. 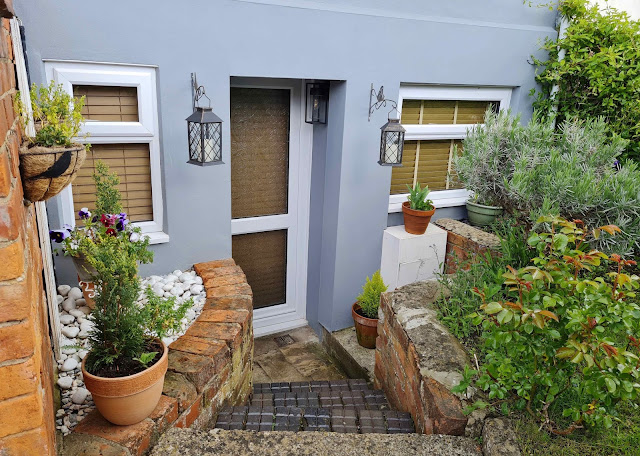 We stayed in a cosy apartment in the basement of the house where Laurie Lee was born. It was packed with complimentary retro treats from Ritz and Cadbury’s animal biscuits to Riesen and Werther’s Originals. During the days we visited Slimbridge wetlands and walked the Cotswold canals and Laurie Lee wildlife trail. 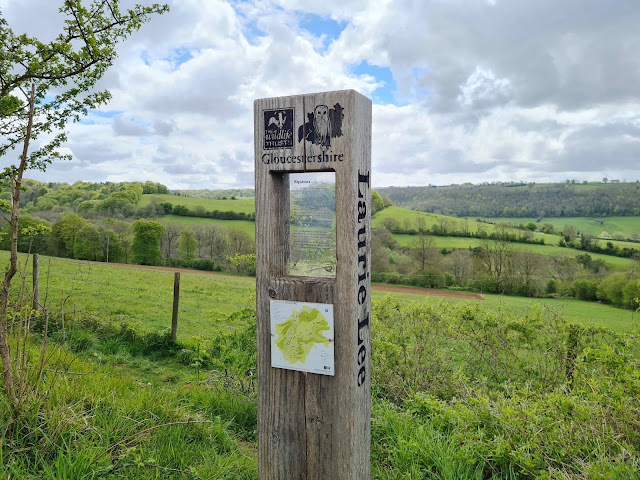