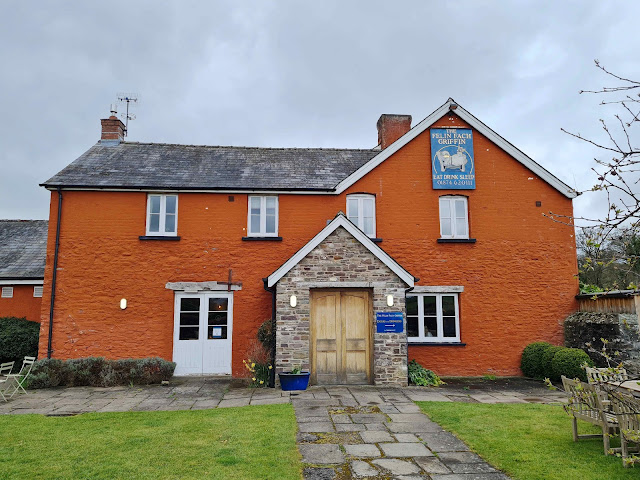 It’s a fair indicator of how old this blog is that I’m able to say the last time I reviewed a restaurant was ten years ago.

One such place is the Felin Fach Griffin, a charming pub with rooms near Brecon, which we last visited in April 2012. We had a rather stonking Sunday roast and dinner as part of their Sunday Sleepover deal.

More recently, the Griffin has gained national attention as it has secured an impressive ranking of 34 in this year's Top 50 Gastropubs list. Whilst some awards aren’t worth the paper they’re printed on, this is most certainly not one of them.
The Griffin's ascent in the gastropub rankings can most certainly be linked to the arrival of a new head chef, Nick Evans, in April 2021. 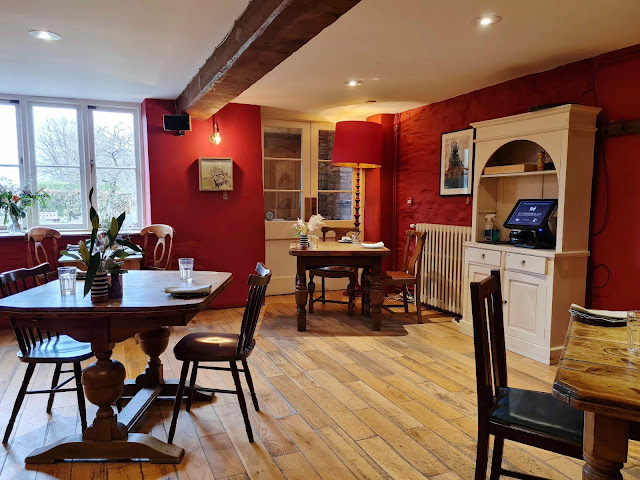 With an impressive CV, Nick was previously executive chef at Tom Kerridge’s Bull and Bear in Manchester and Craft Dining Rooms in Birmingham as well as a National Chef of Wales title holder.

Whilst the Griffin has the feel of a quintessential country pub with its roaring fireplace and good selection of Welsh cask ales, their food is some of the most technically accomplished that I’ve eaten in Wales lately. 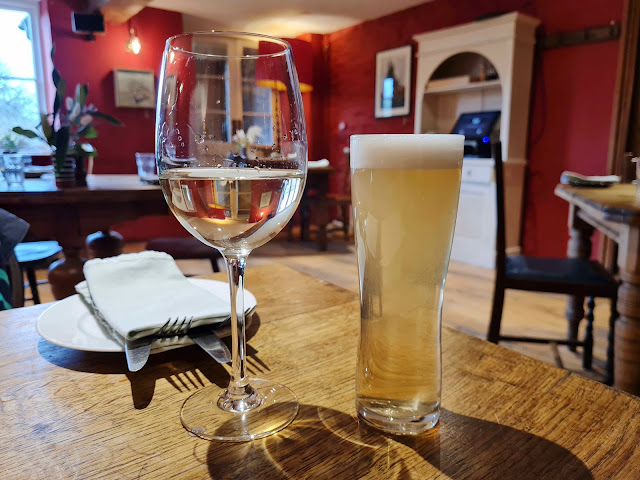 A first bite of warm country cob loaf with a shatteringly crisp crust and soft crumb was an indicator of very good things to come. 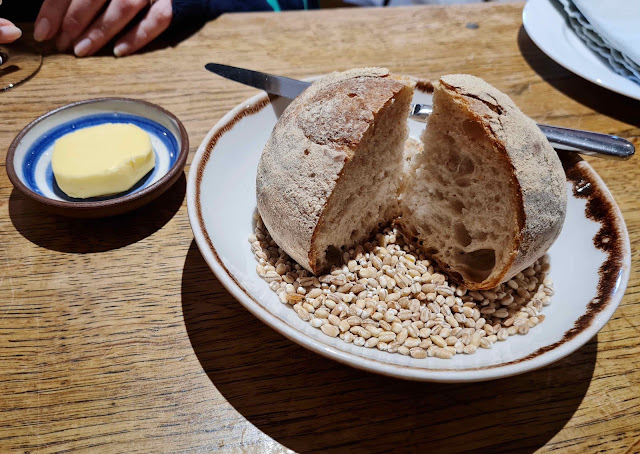 The Griffin’s menu descriptions most certainly belie the amount of effort which has gone into each plate.

A vibrant green and vegetal watercress soup (£7.50) was served in a jug to pour over its garnish, a crisp crumbed and beautifully runny egg, tender jersey royals, chive oil and light dusting of funky truffle. 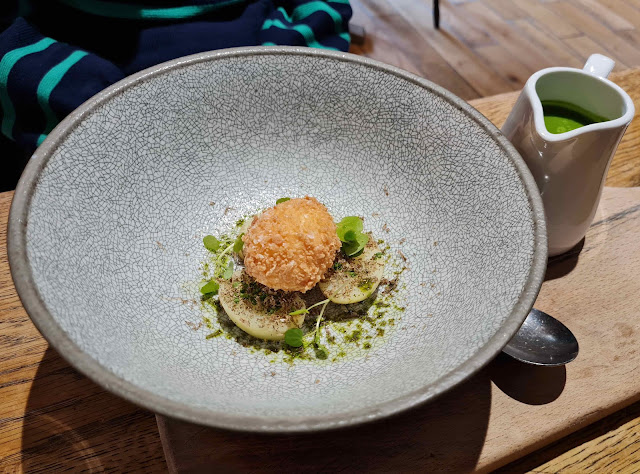 My starter was described as ‘fish pie’ (£9.50) but this was certainly no ordinary family favourite.
Beneath a layer of aerated potato dotted with nuggets of crunchy cheddar hid a generous hunk of flaky smoked haddock, sweet peas and soft leeks bathed in a butter sauce thrumming with dill and chive. Somehow this classic dish had been elevated in luxury whilst becoming a much lighter proposition. 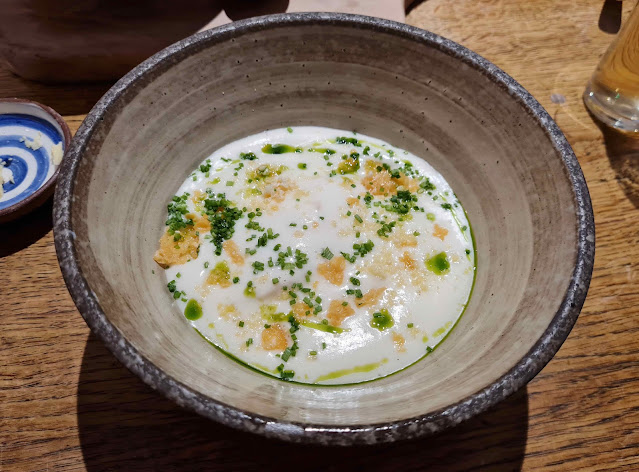 Mains wouldn’t have looked out of place in a Michelin-starred restaurant but the intense and hearty flavour combinations ensured there was no risk of style over substance.
A crisp-skinned fillet of hake (£17) was accompanied by pieces of long-cooked and caramelised celeriac, dill-seasoned greens, smoked leeks and a luxurious chicken butter sauce. Mrs G barely gave me a look-in before she polished off her plate. 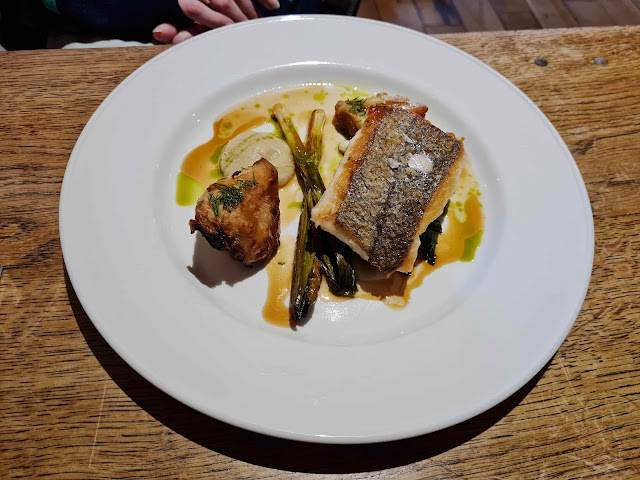 I was equally impressed by my lamb (£17.50) which combined a seriously tender and crisp-skinned slab of lamb belly alongside a dense and intense lamb kofte that was reminiscent of a merguez in its seasoning. Silky hummus, wild garlic mayonnaise, roasted cherry tomatoes and crunchy chickpeas all counterbalanced the richness of the sheep. 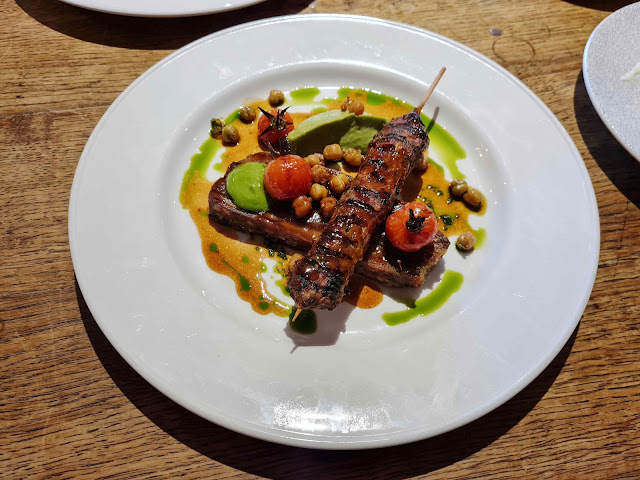 Sides would have made an excellent lunch in their own right. A first rate Caesar salad (£3.50) was given an extra dimension by the light charring of the little gem leaves used in its construction. 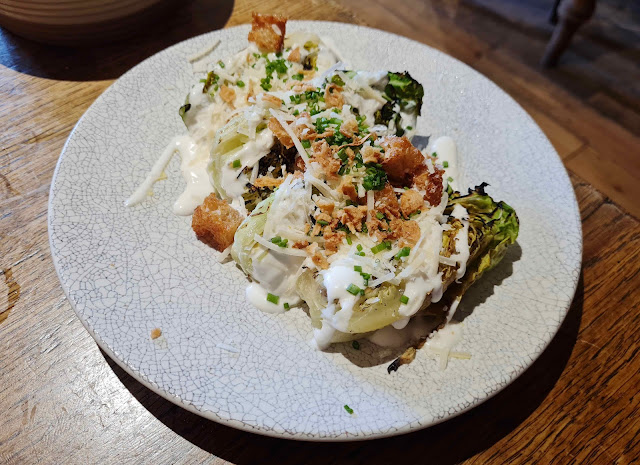 “Cheese, chips and gravy” (£5) appeared to be missing its gravy component but I was rather glad there was nothing in the dish to compromise the ridiculous crispness of the fried potatoes. If you’d told me they were quadruple or quintuple cooked, I’d have most certainly believed you. 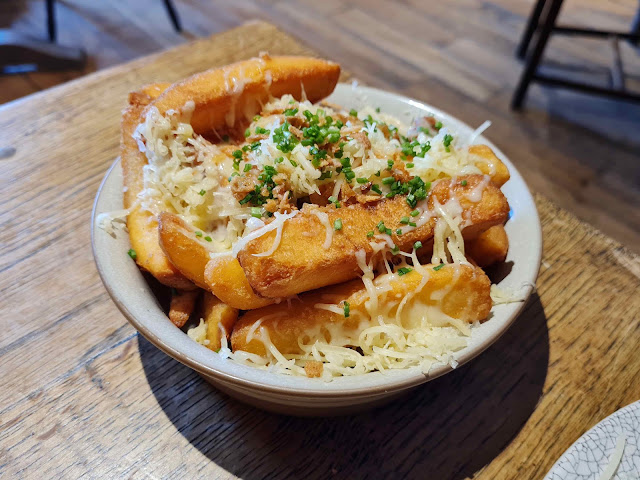 With Mrs G once again too full for dessert (disappointing), the responsibility was once again left to me. And with puds on offer including lemon curd tart, rice pudding with rhubarb compote and banoffee pie, it was a rather difficult decision to make. 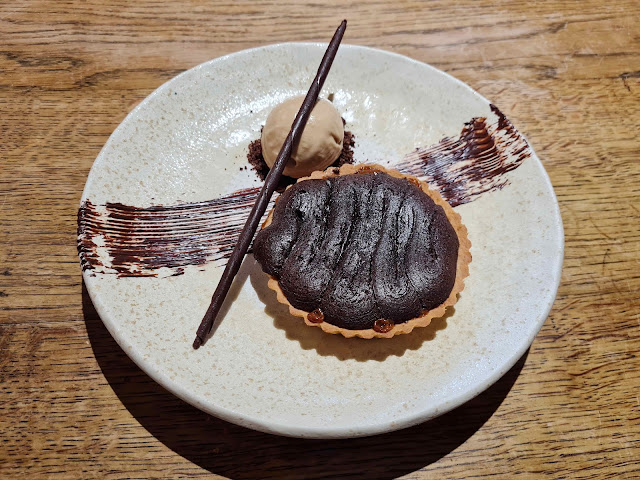 We had an absolute corker of a lunch at the Griffin. With its magnificent cooking, lovely setting, delicious Welsh ales and slick service, it deserves all the plaudits it gets. I hope we're be back sooner than ten years’ time.
The Details:
Address - The Felin Fach Griffin, Felinfach, Brecon LD3 0UB
Web - http://www.felinfachgriffin.co.uk/
Telephone - 01874 620111
Posted by gourmetgorro at 08:09