A few great places to eat and drink in Paris, 2022 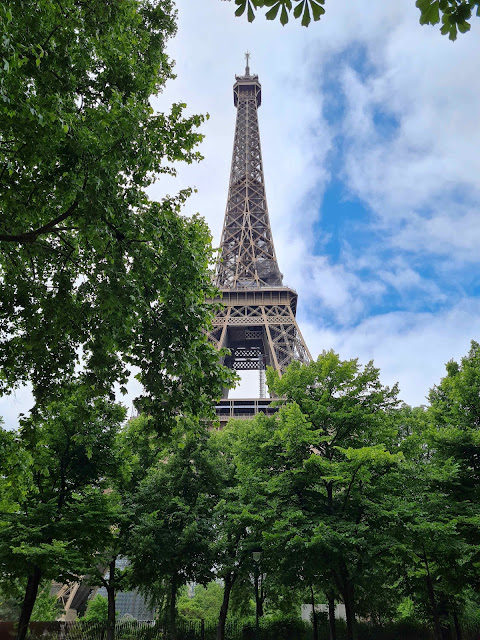 From strolling along the city’s leafy green boulevards and the banks of the beautiful Seine to gawping at the street art and the magnificent architecture, I never tire of visiting the City of Lights.

And the food and drink is rather bloody lush too. 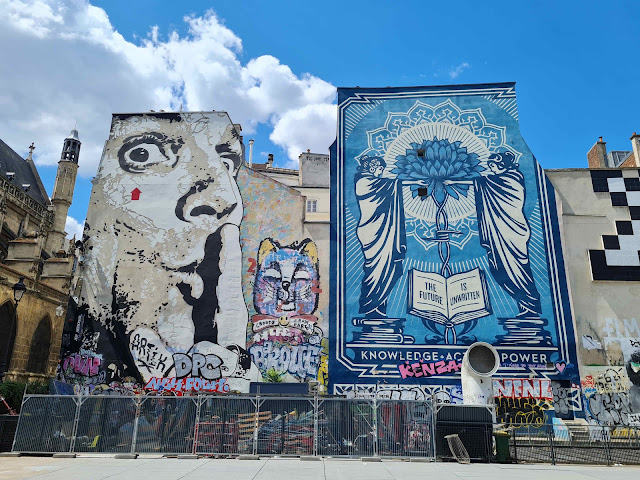 Over the course of four and half days (only three of which were planned, thanks Easyjet), here’s where we ate and drank.

Sure, we were surrounded by other tourists but there's still something pretty iconic about this classic bistro which was a favourite haunt of Anthony Bourdain. The menu makes no concessions with dishes including andouillette and whole bunches of veal kidneys.

To start, eggs were adorned with silky mayonnaise with a good punch of mustard and served with a perfectly dressed salad. A light vol au vente was filled with buttery sweetbreads and mushrooms, both of which would have benefited from a little more caramelisation. 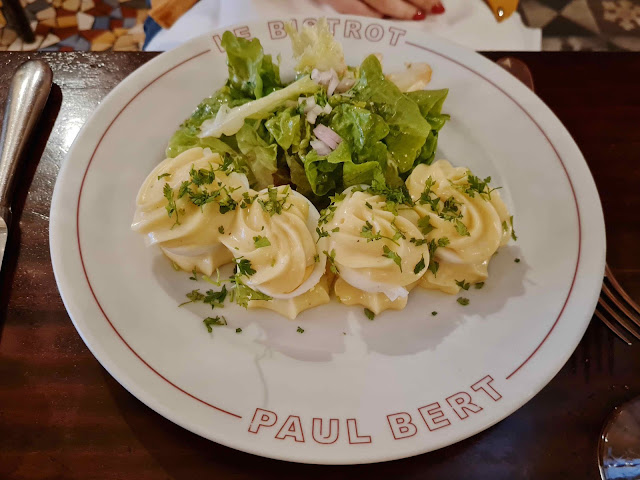 An archetypal steak au poivre saw a nicely crusted rare piece of meat bathed in a thick cream sauce with a good whallop of peppercorn and the warmth of brandy. It was accompanied by textbook crisp frîtes, which must have been fried in some form of animal fat. 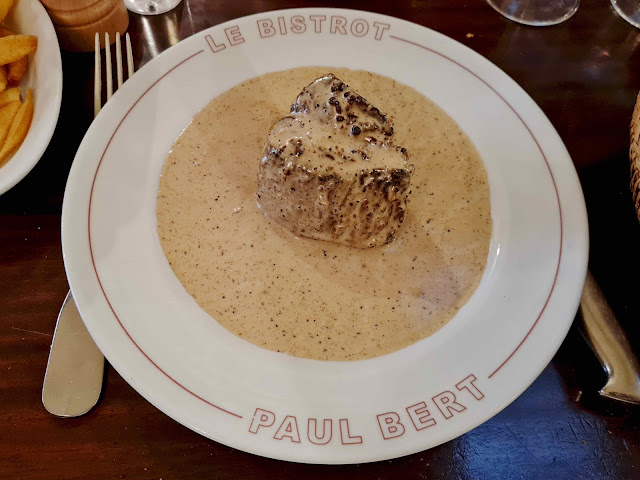 Desserts were the highlight of the meal - île flottante combined a slab of ethereally light meringue jewelled with crisp almonds and praline, bobbing in a silky vanilla-fragranced custard. Apple tart, made with the finest of crisp pastry bases, was topped with soft sweet apples and a scoop of vanilla ice cream. 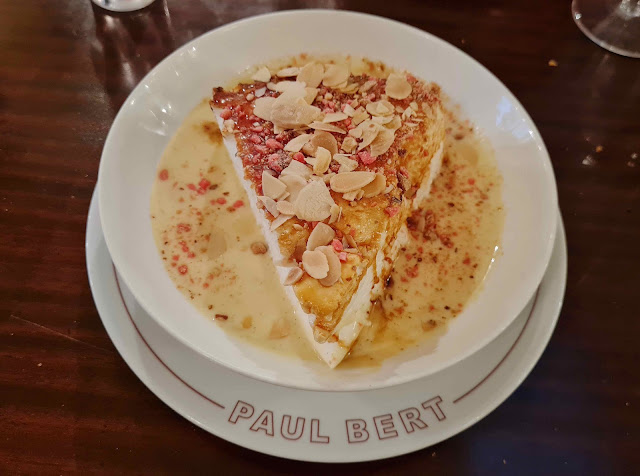 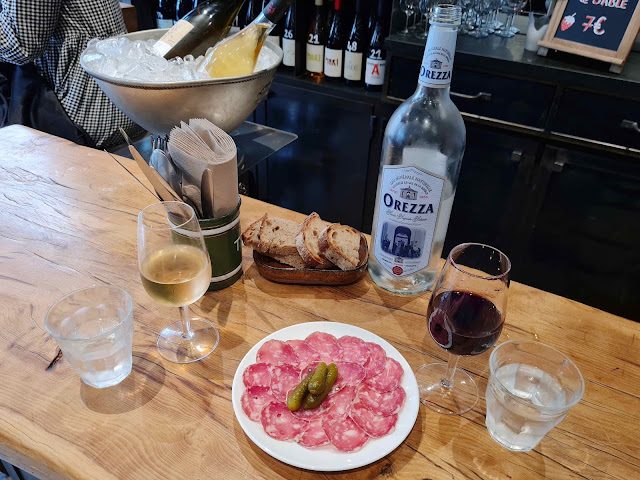 This hip sourdough bakery and coffee roastery is the kind of gaff I associate more with London rather than Paris. With three branches across the city, it’s an absolute corker of a place and was our breakfast destination of choice three days on the bounce. 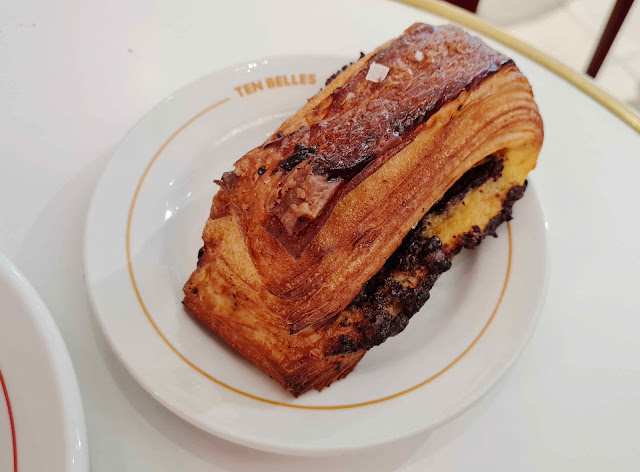 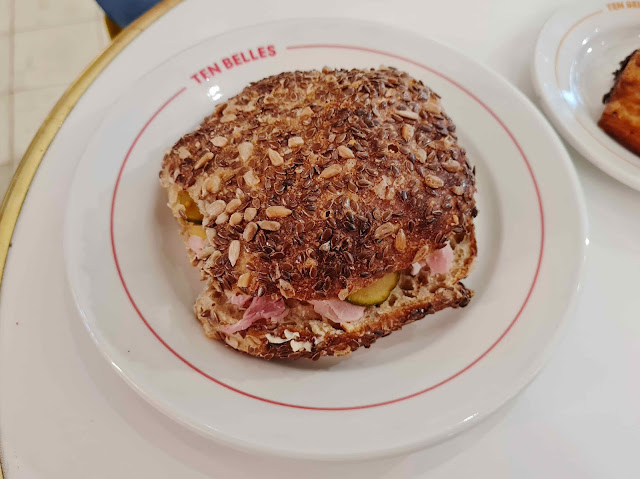 This super hip yet friendly bar has a great selection of craft beers and natural wines by the glass. They also have a stonking cellar of lambic beer, with names such as Cantillon, Antidoot, Bofkont and 3Fonteinen all appearing. A bottle of Cantillon Muscat Petit Grains had a lovely pithy citrus thing going on.

If you’re looking for more good beers then La Fine Mousse and La Ruée vers l'Orge are also both well worth checking out. 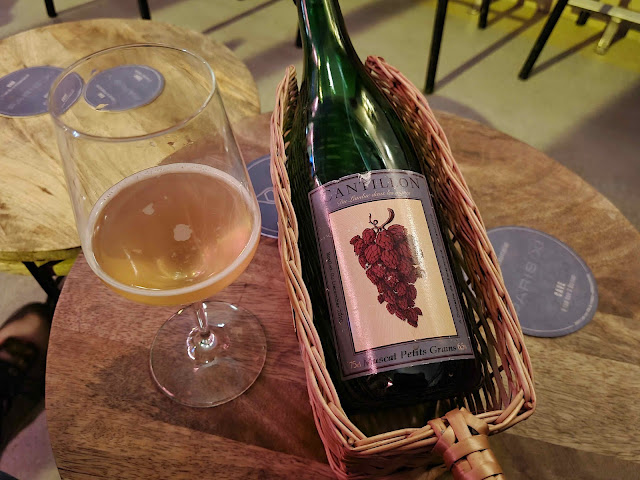 Tucked away on a side street just a few blocks away from the horribly busy Eiffel Tower, the corner Cafe de Mars is an oasis of tranquility. Their cooking is understated yet packed with flavour. 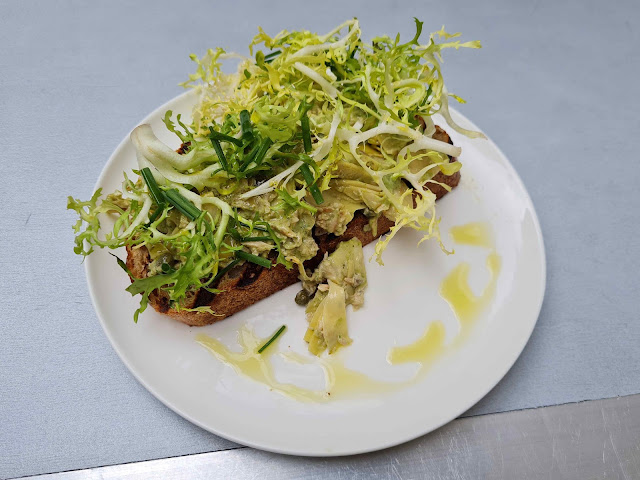 Stupidly tender baby back ribs were accompanied by a crisp and perky slaw whilst an onglette steak with a light chew and big flavour was dressed with an umami-packed Drunken Dragon sauce, buttery potato puree and shiitake mushrooms with a note of balancing acidity. 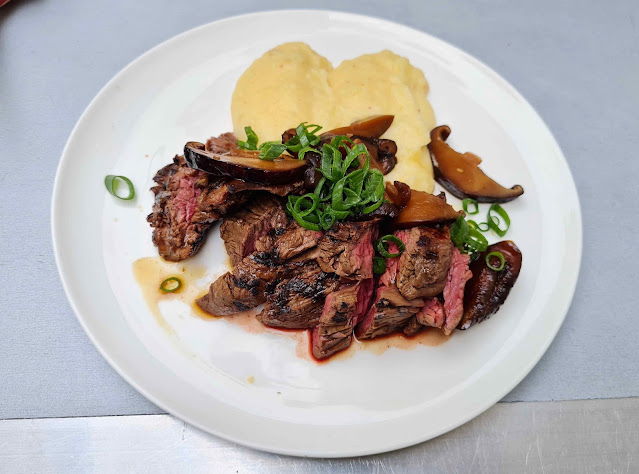 There's a big vibe at Le Collier de la reine, a seafood bar and restaurant that’s one of the hottest new openings in Paris. I'm not sure if we quite had the look as we were put in a back room alongside the other tourists and restless toddlers. 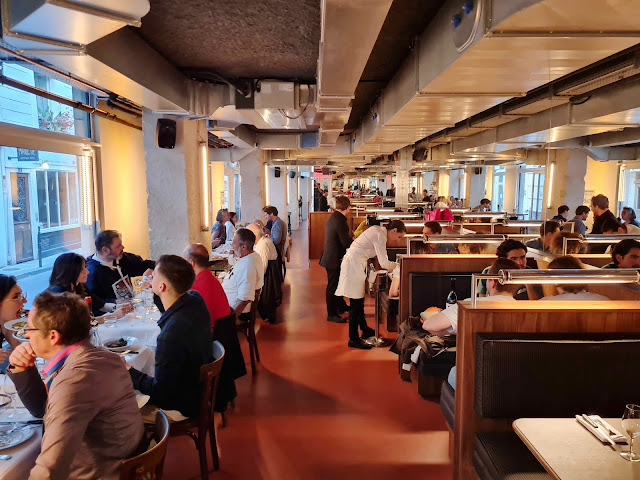 A portion of eggs Moscovite was worth the visit alone. Hyper crisp potato rosti was topped with perfectly poached eggs and a buttery sauce flecked with pearls of salty caviar. 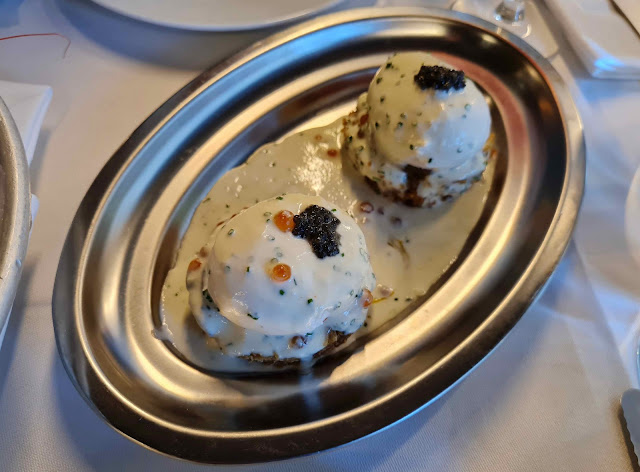 However, gorgeously sweet lightly cooked langoustines served with a cleverly nutty ajo blanco mayonnaise, hadn't been de-veined. It left us with a lot of extra work to do and a lot of unappetising mess. 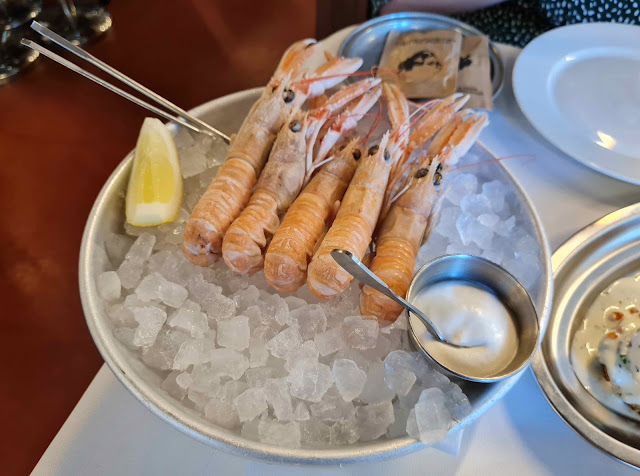 Alain Ducasse's bistro is a slice of class, including its pretty floral crockery and dining room which doesn't look like it's changed in a hundred. And their three course set lunch menu for €42 is cracking value for a Michelin-starred restaurant.

After a plate of warm cheese gougeres and crusty bread with thickly slathered butter we enjoyed herby pate ên croute, made with Madagascan prawns and Bresse chicken, and a precisely dressed green salad topped with nutty pears and a delicately funky slice of goats cheese. 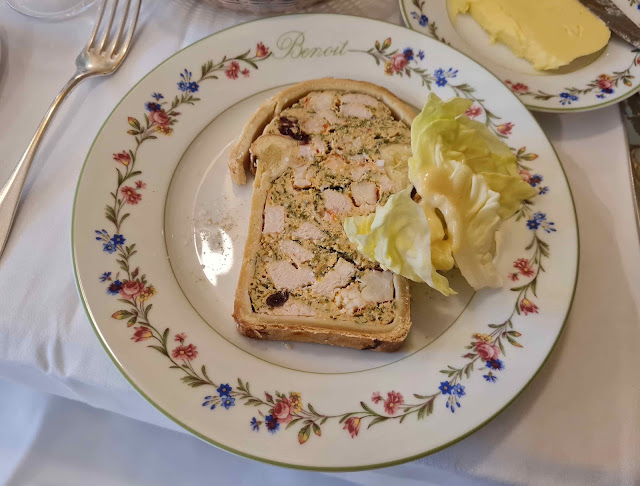 Duck parmentier, made with slow-cooked bits of bird and cheese-crusted mash, was the luxest version of a Shepherds pie I’ve ever encountered. 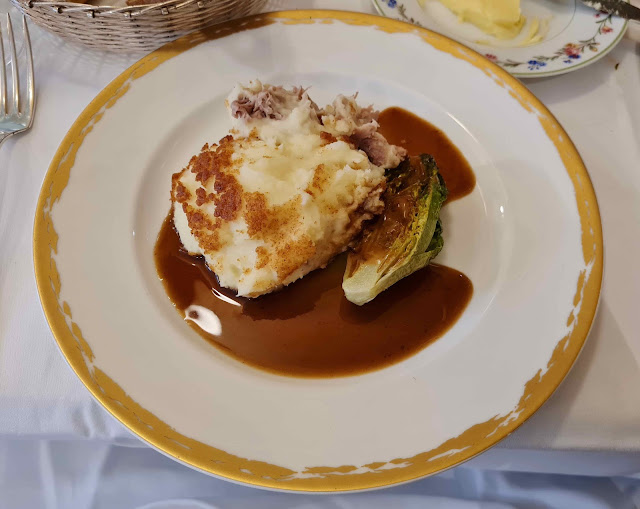 Desserts were the star of the show. Dinky custard filled profiteroles were served with a bitterly rich hot chocolate sauce and a scoop of first rate vanilla ice cream. And a custard cream stuffed millefeuille lived up to its thousand layer billing. 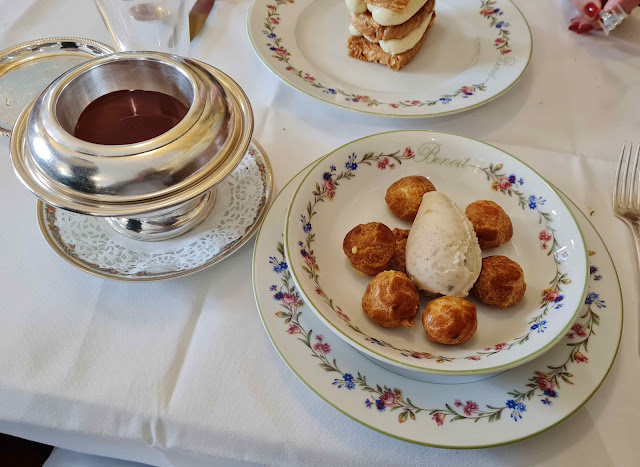 This wine bar is the Paris outpost of Champagne Fleury, the world’s first producer of biodynamic champagne, which they started making back in 1989. 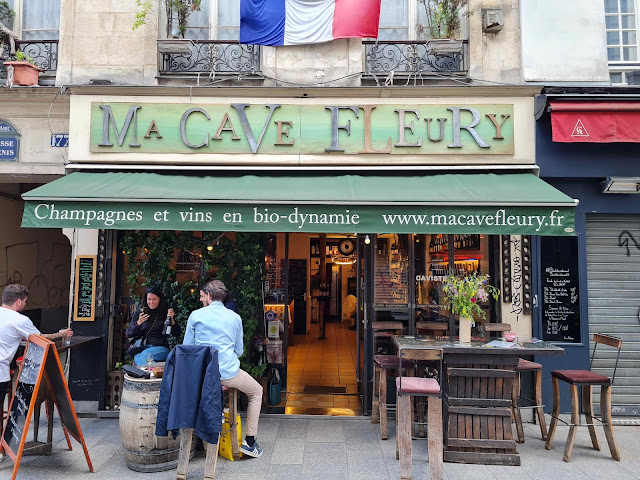 All of the natural wines they serve by the glass were lush, including their champagne, and they were lovely washed down with a cheese and meat platter. 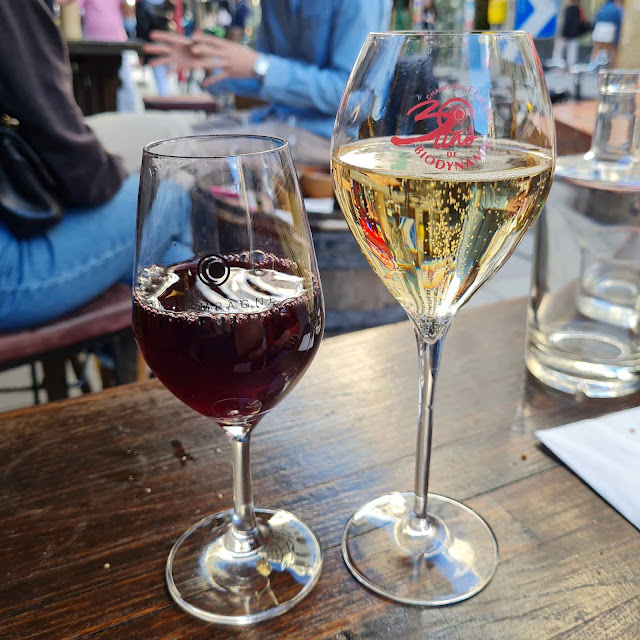 This cavernous 500 cover restaurant makes for a great fun and great value night out. Whilst hoards of people queue up outside for a table it’s handy to know that you can also reserve online. 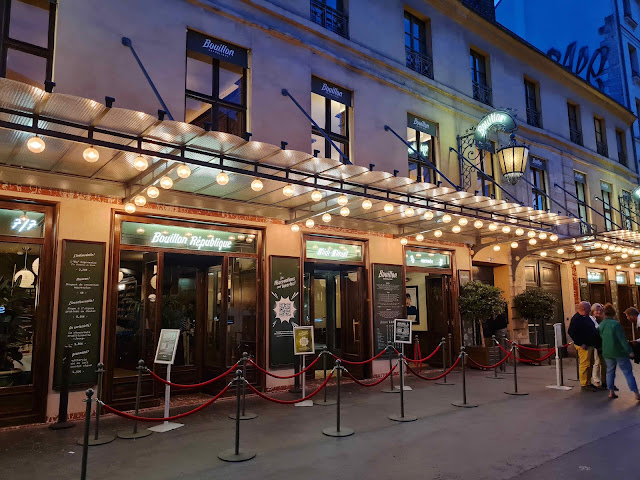 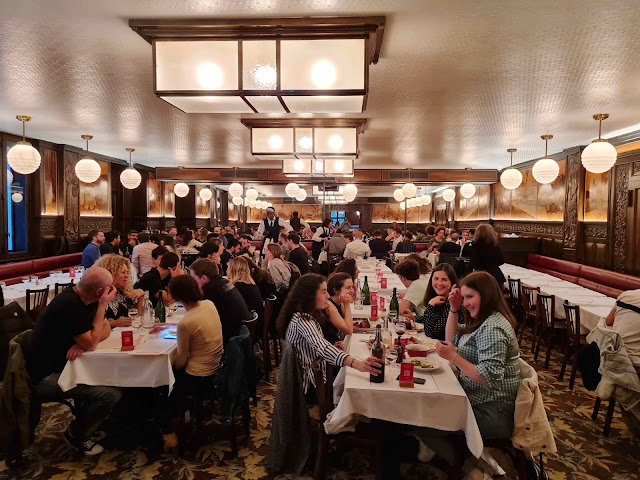 Half cut, I chose rather poorly. A bowl of chicken bouillon (€2.80) tasted like an intense oxo cube with a few noodles thrown in for good measure whilst delicious smooth mash and gravy was let down by a rather dry and wrinkly sausage (€9.40). 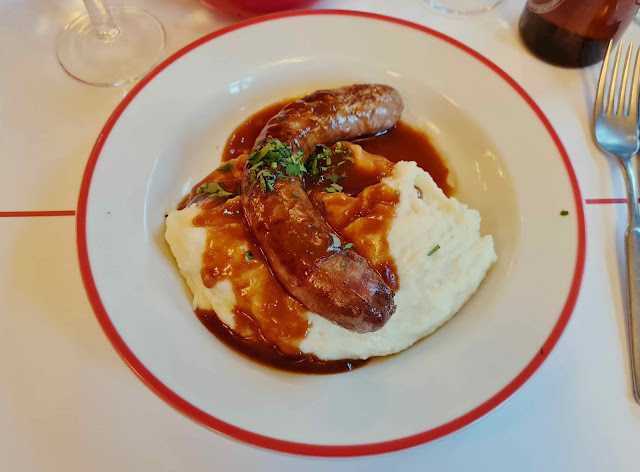 There was more success with excellent mustard-twanged egg mayo (€2.20!!!) and a rich and creamy butternut squash and blue cheese gratin (€8.50). 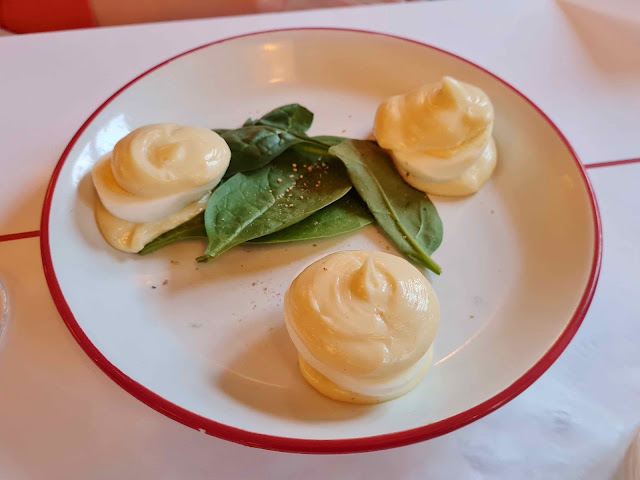 A pretty good crisp-crusted tarte au citron (€3.80) was also a lot better than a rather soggy rum baba (€4.50) which tasted of caramel without even the merest whiff of booze.

Still, with its brilliant ambience and a meal for two with wine costing us 36 euros, it made for a great fun night out. 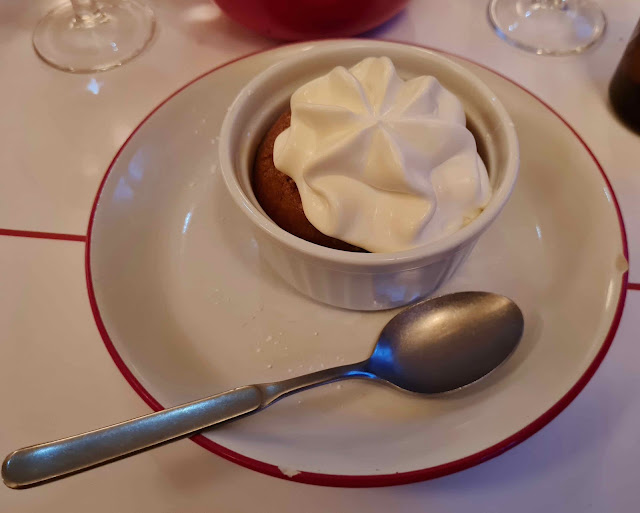 A traditional brasserie meets hip nightspot, we were very impressed by Brasserie Dubillot’s classical cooking. It's a lovely spot to sit on the street and watch the world go by. 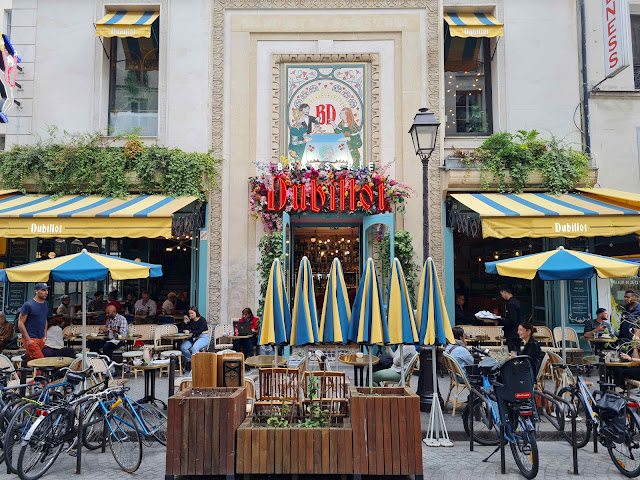 Country pork terrine was packed with coarse meat and a good oink of pig whilst a creamy celeriac remoulade made with dainty batons of the root vegetable was flecked with nuggets of morteau sausage. 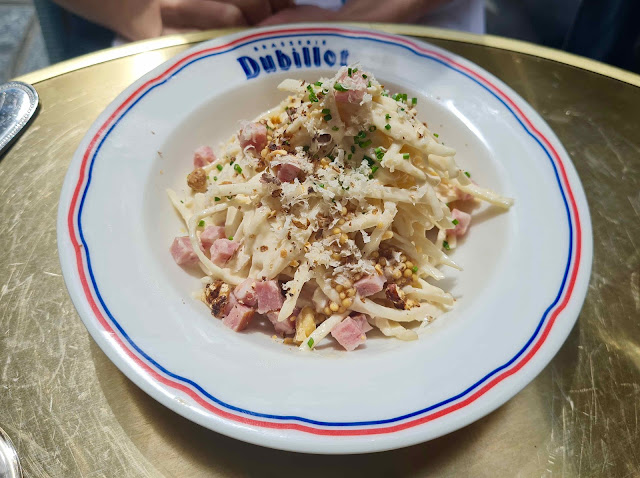 For mains, a crisp-skinned fillet of cod was bathed in a creamy bisque with a big hit of earthy brown crab. A well-flavoured and tender skirt steak was accompanied by mound of crisp frîtes and a thick bearnaise which reminded me of McDonald's secret sauce thanks to the addition of finely diced onion and gherkin. 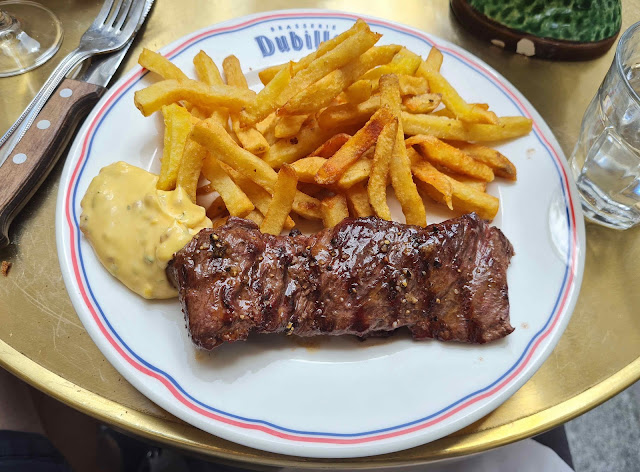 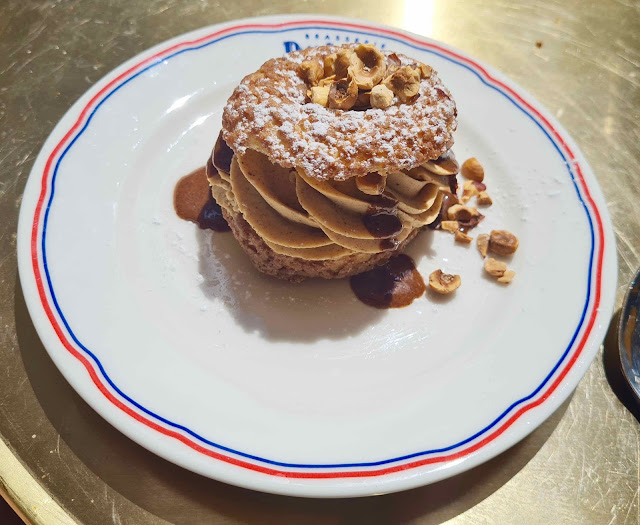