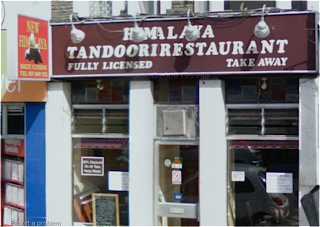 I've been to the New Himalaya on a handfull of occassions and really really enjoyed it. However, I've also had takeaway once and thought it was pretty awful. I tried to work out why it was that my takeaway experience had been so unenjoyable yet I had enjoyed it so much when eating at the restaurant . It didn't take much investigative work; I was very drunk the times I had dined out.

The New Himalaya is one of those late night drunken guilty pleasure curry houses where the food is the epitome of generic. Curries swimming in ghee - check. Half and half (for those outside of Wales this means half chips / half rice on the same plate) on the menu - check. People eating onion bhajees with their hands - check. Empty everynight of the week except from 10pm til 2am on a Saturday - check. Not that I'm criticising the place. There aren't many places where you can go at midnight on a Saturday except for a nightclub.It's really not that bad. It's also not that good either.

Onto the review then. We ended up going to the New Himalaya last night at approximately 12am. I say approximately because things really were a little hazy by this point. The restaurant looks as though it hasn't been refurbished since the mid 1980s. If this is the New Himalaya I'd love to see what the old Himalaya looks like. After being seated we ordered a round of poppadoms and chutneys. Poppadoms and chutneys were swiftly delivered to the table. Chutneys were the usual fare except for one bizarre addition; chilli sauce. I'm guessing it was included for kebab shop drunkards so that they didn't suffer from withdrawal symptoms.

After being served our poppadoms the service took a bit of a nosedive. I think this was largely due to the fact that nearly everyone in the restaurant had arrived simultaneously after being chucked out the pub so the waiting staff weren't really to blame. After a good half hour wait our mains arrived. As I'd already eaten dinner earlier in the evening I only had a light bite to eat. Foregoing my usual onion bhaji starter and side of keema naan I stuck to a Chicken Nawaabi and rice. The dish consisted of pieces of chicken breast in a spiced minced lamb sauce.Why waste your time with normal curry sauce when you can have meat in a meat sauce? I like to think of it as the crack cocaine curry equivalent; a more intense meat hit and more addictive.The reassuring film of ghee swam on top of the curry but as expected it was really tasty.

Having finished our meal the bill was delivered with an aftereight for everyone. The perfect way to round off a meal which finished after 1:30am. I'm looking forward to my next late night rendezvous at the New Himalaya so much that I might be tempted to get takeaway from there in the meantime. If I do I might down a couple of pints first.