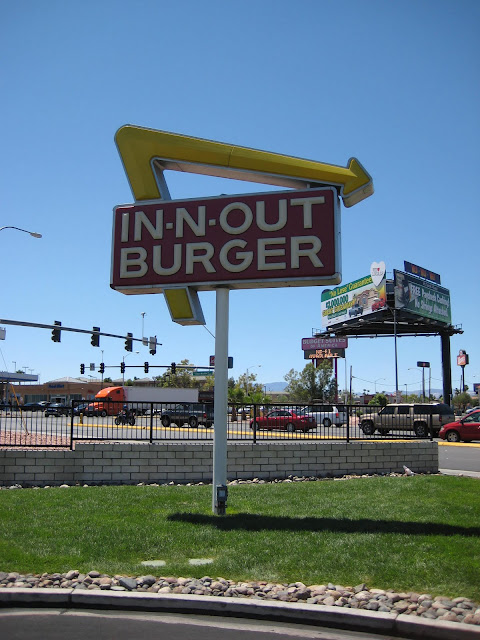 In-n-Out Burger is frigging ace. I wish we had somewhere like it in the UK. In fact another food blogger holds this viewpoint so strongly that he started a campaign to bring it over to Blighty. It's been unsuccessful as yet and in fact In-n-Out are so obsessive about the quality and freshness of their ingredients that until this year they hadn’t moved beyond their historic heartlands of the West of America (all branches were within a day’s drive of their Californian beef patty production facility; a second patty facility has recently opened in Texas). 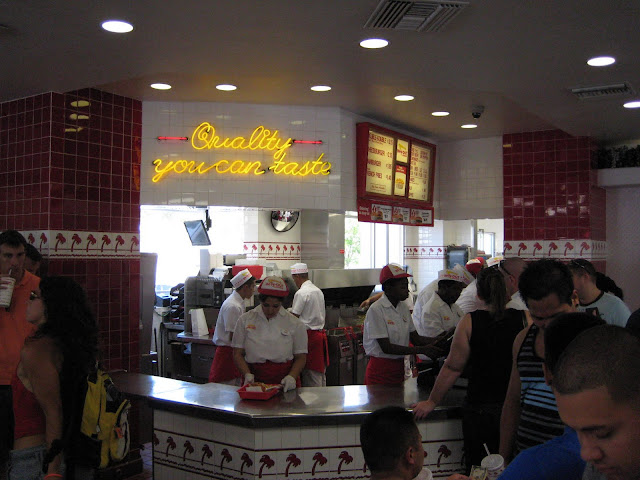 In-n-Out doesn't just hold cult status with UK tourists with idealistic notions of the ultimate American burger. It’s insanely popular with the locals as well. Merely minutes after our lunch order was taken, a queue of around 40 people was snaking around the restaurant. It even got a little bit tense at one point with a couple of burly blokes next to us getting into a Mexican standoff about who had been waiting longer for a table. Fortunately rather than it ending in punches being thrown, thoughts and feelings were shared and reconciliation was reached. I can’t picture the same thing happening at McDonalds on St Mary’s street.
The secret to In-n-Out’s success is their focus on freshness and keeping things simple. Their burger menu consists of hamburger, cheeseburger and the legendary double-double (a double cheeseburger). It’s all really simple yet so delicious; fresh buns, fresh salad and 100% fresh beef patties. And what’s more, all their burgers are cooked fresh to order. In fact, In-n-Out burger laughs in the face of freezers and microwaves. It’s at this point I must admit that on this visit I was disappointed with the fries as they didn’t taste as fresh as I remember them; they were even on the road to sogginess by the time we took our seat to dine.
Even though the In-n-Out’s official menu is brief, their much fabled secret menu consists of over 25 items (it's not on display so just ask); the jewels in the crown of which are the Animal style Double-Double and Animal fries. An Animal style burger results in the beef patty being cooked on the griddle in mustard to give it an extra crust along with the inclusion of extra diced onions, spread (a thousand island style sauce), and pickles. Meanwhile the animal style fries come with lashings of melted cheese, griddled onions and spread on top. They’re the ultimate cheesy chips.
After lunch we made a brief pit-stop at the In-n-Out merchandise store. In fact this was where I did the majority of my week’s shopping (who needs Ralph Lauren or Louis Vuitton?). On my shopping list were t-shirts for all and sundry, a baby grow for an expecting burger obsessive, a mug, a lanyard for Mrs G to wear in work and a couple of caps. Because we spent so much money we got a rather funky french fry Christmas tree ornament thrown in free.
Details:
-->In-n-Out Burger, 4888 Dean Martin Dr, Las Vegas, NV 89103, 1-800-786-1000
-->http://www.in-n-out.com
->It’s about a $7-10 taxi ride from the strip depending on where you’re staying. It’s worth every cent and I was mightily tempted to revisit later in the week.
->The Las Vegas In-n-Out merchandise store is one of only 2 that exist, the other is next to the first ever In-n-Out burger branch in Baldwin Park.
Posted by gourmetgorro at 19:18