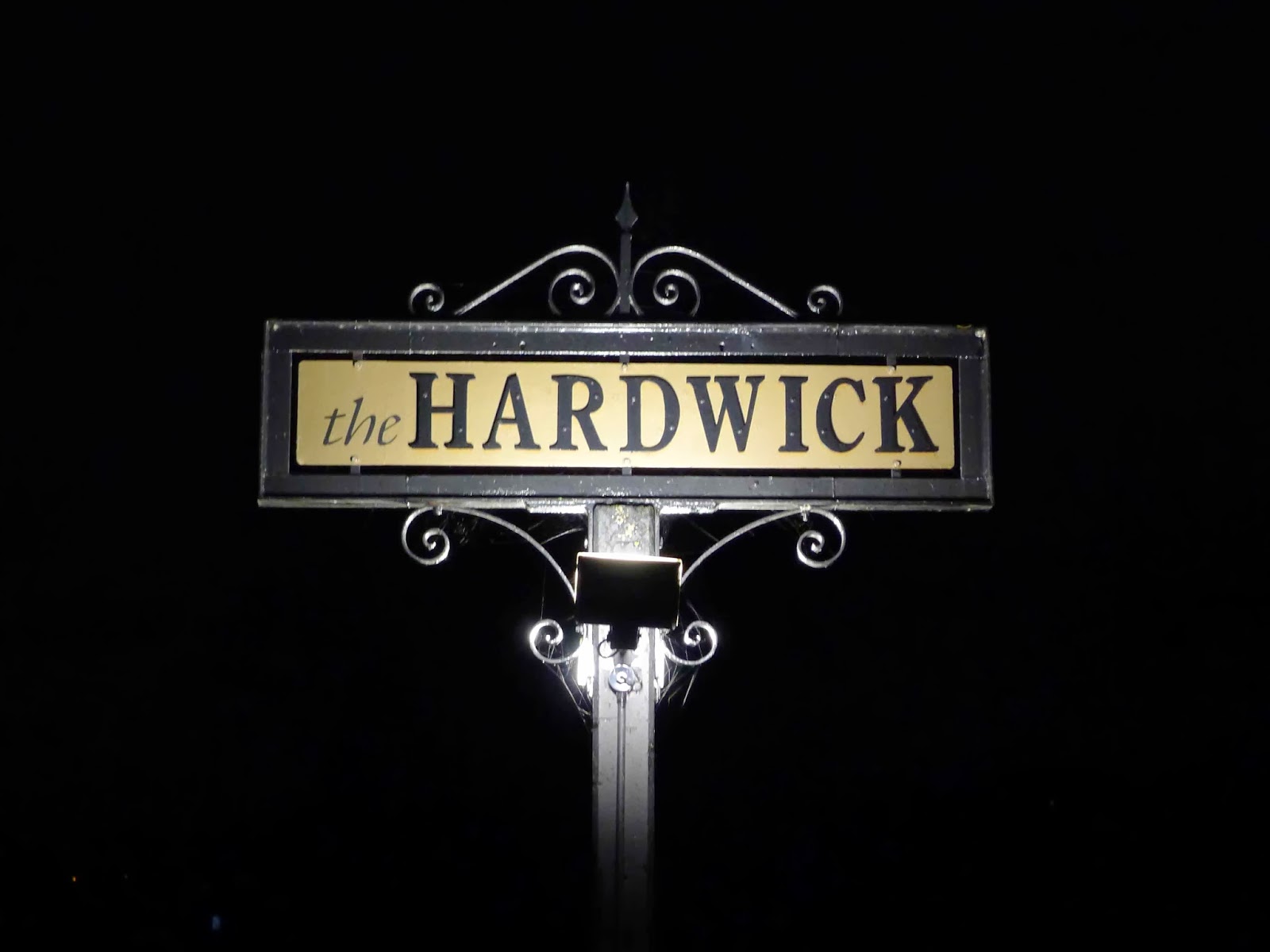 The Hardwick is one of Wales’s best-known and most celebrated restaurants.

You’ve probably already heard the blurb about their celebrated chef and ethos of generous, un-poncy, meaty, comfort food before.

If so, just skip to the pictures of the nosh… 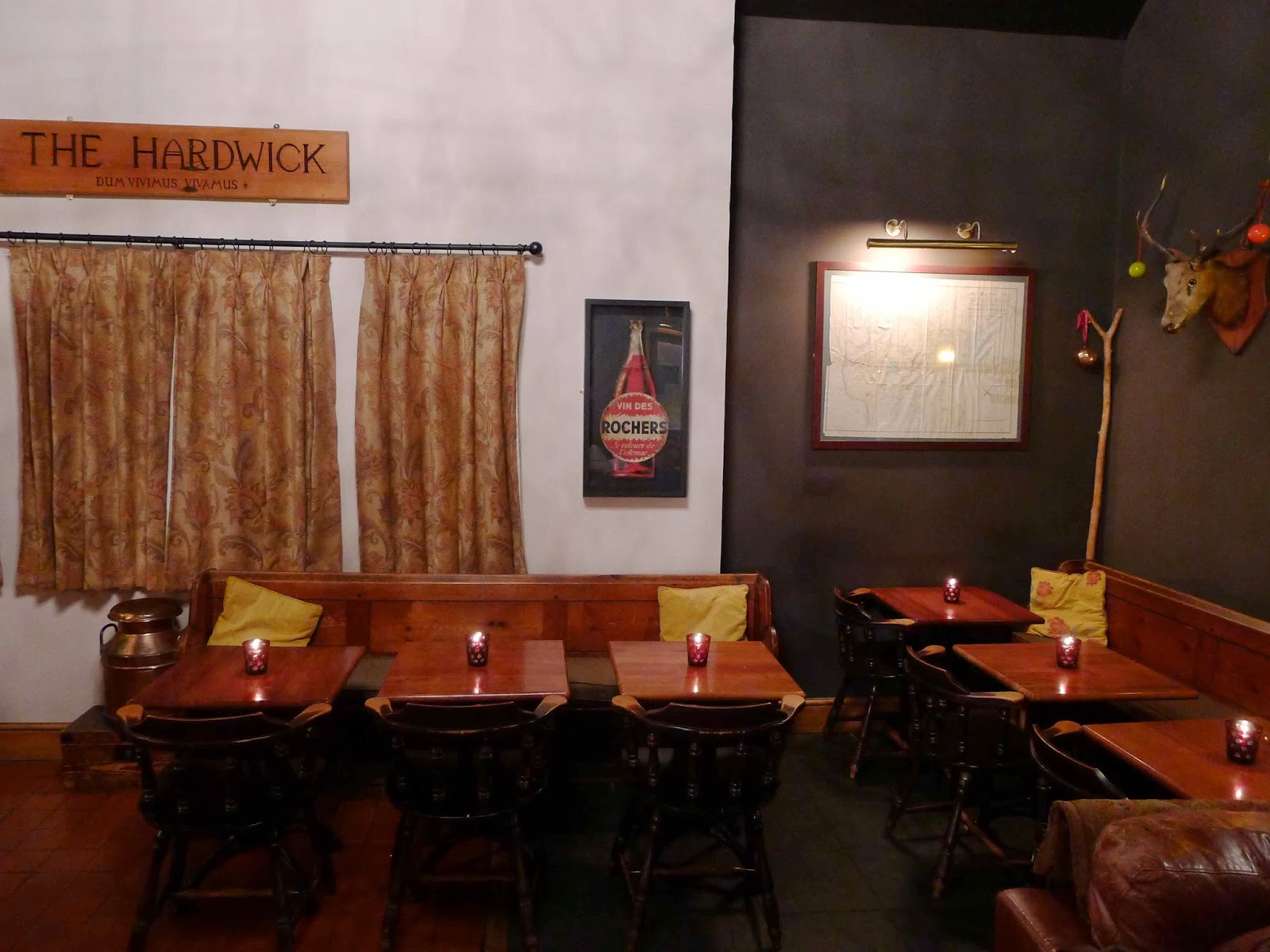 Located in the country’s gastronomic heartland of Abergavenny, the rurally set Hardwick could variously be described as a “restaurant with rooms” or a “gastro-pub” depending on which cliché tickles your fancy.

Chef-patron Stephen Terry has a serious CV behind him. He trained under legendary chefs Marco Pierre White & Michel Roux Jr; he was awarded his first Michelin star at the age of 25; he’s mentored some of Britain’s finest including Jason Atherton and Hywell Jones; and he obtained household name status when he cooked the fish course on the Great British Menu in 2008.

We were visiting the Hardwick during the first flushes of December when I’d only just opened my first packet of stilton and when the thought of pyramids of Ferrero Rocher was still a twinkle in my eye.

In other words, I was up for some serious over-eating. 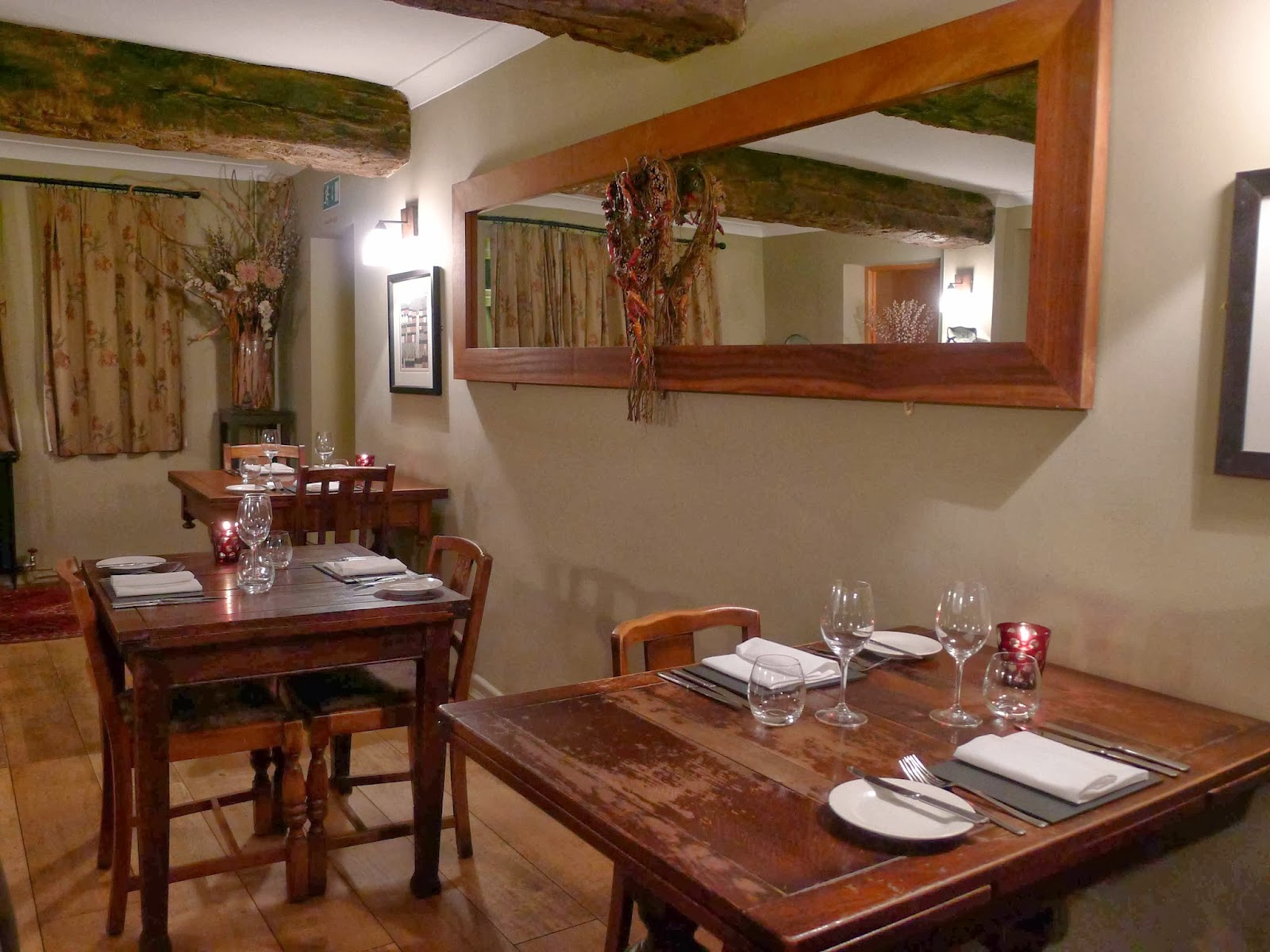 The Hardwick’s menu is one of those doozies where you’d happily order pretty much everything – it’s not cheap (starters are around the £10 mark and mains around £25) but there’s no skimping on the Welsh produce. 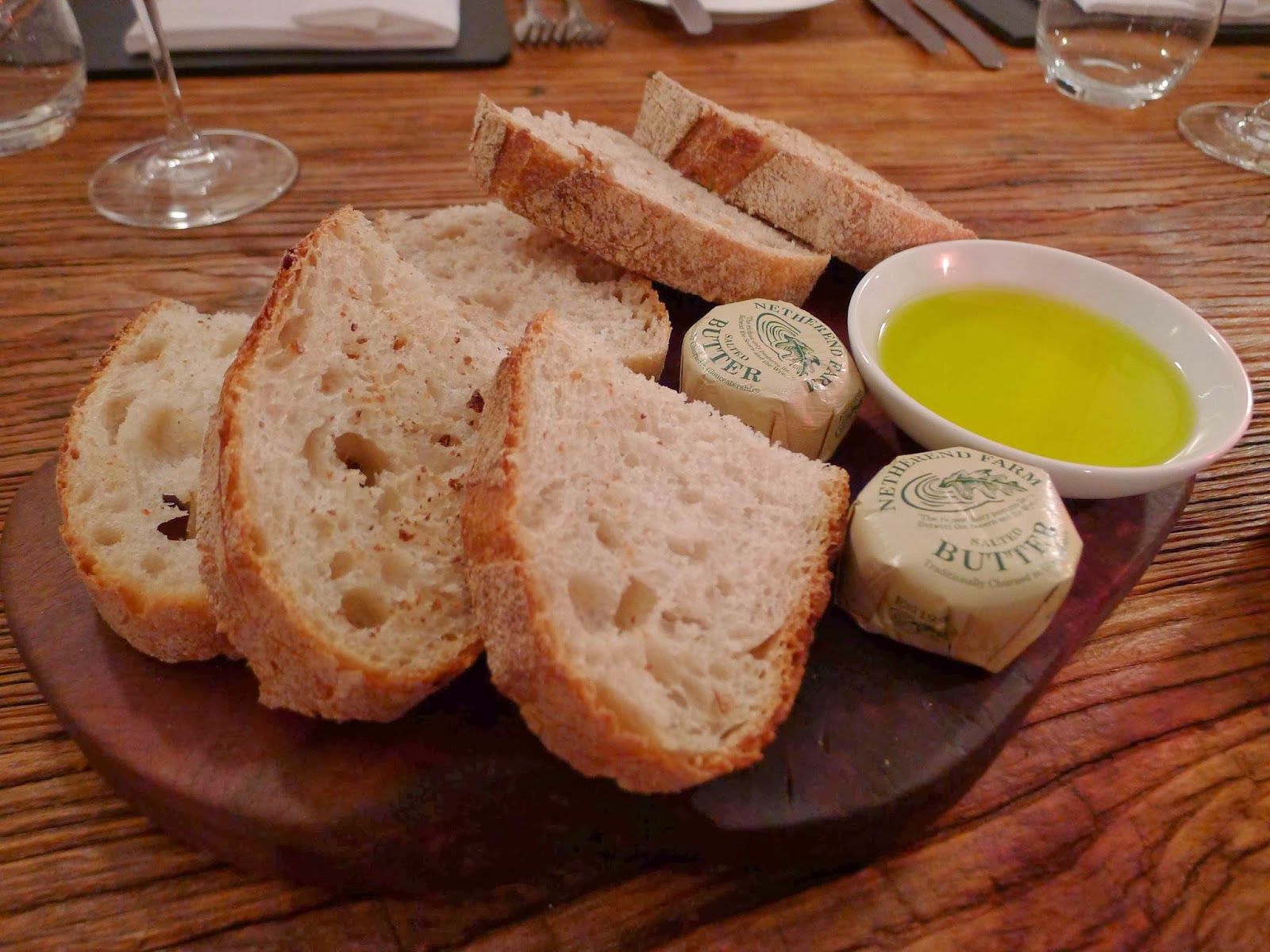 To start, my middle-white pork meat loaf (£8) was actually fairly run of the mill. It was, however, elevated by the quality of the stuff around it – a slick of melted Swiss cheese, sweet red onion confit, crunchy cornichons and more of the superb toasted sourdough drizzled with olive oil. 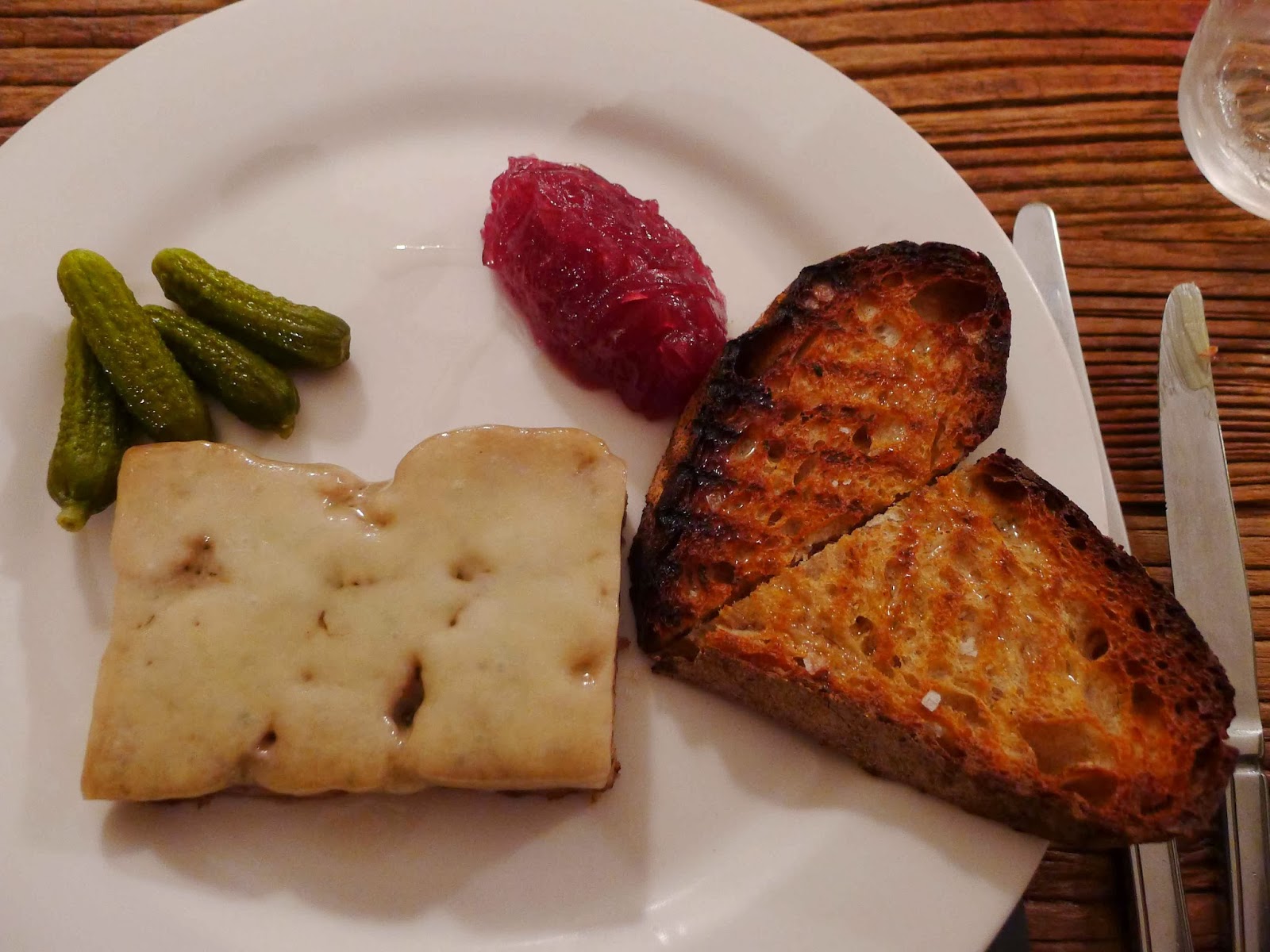 A salad of slow roast beetroot and Neal’s Yard goat’s cheese (£9) was exemplary – dressed well, ambient in temperature, creamy, earthy, made from interesting leaves and scattered with pine nuts and capers for complexity.

Our other dining buddies raved about the confit duck hash (£10) served with a plump, fried duck egg. 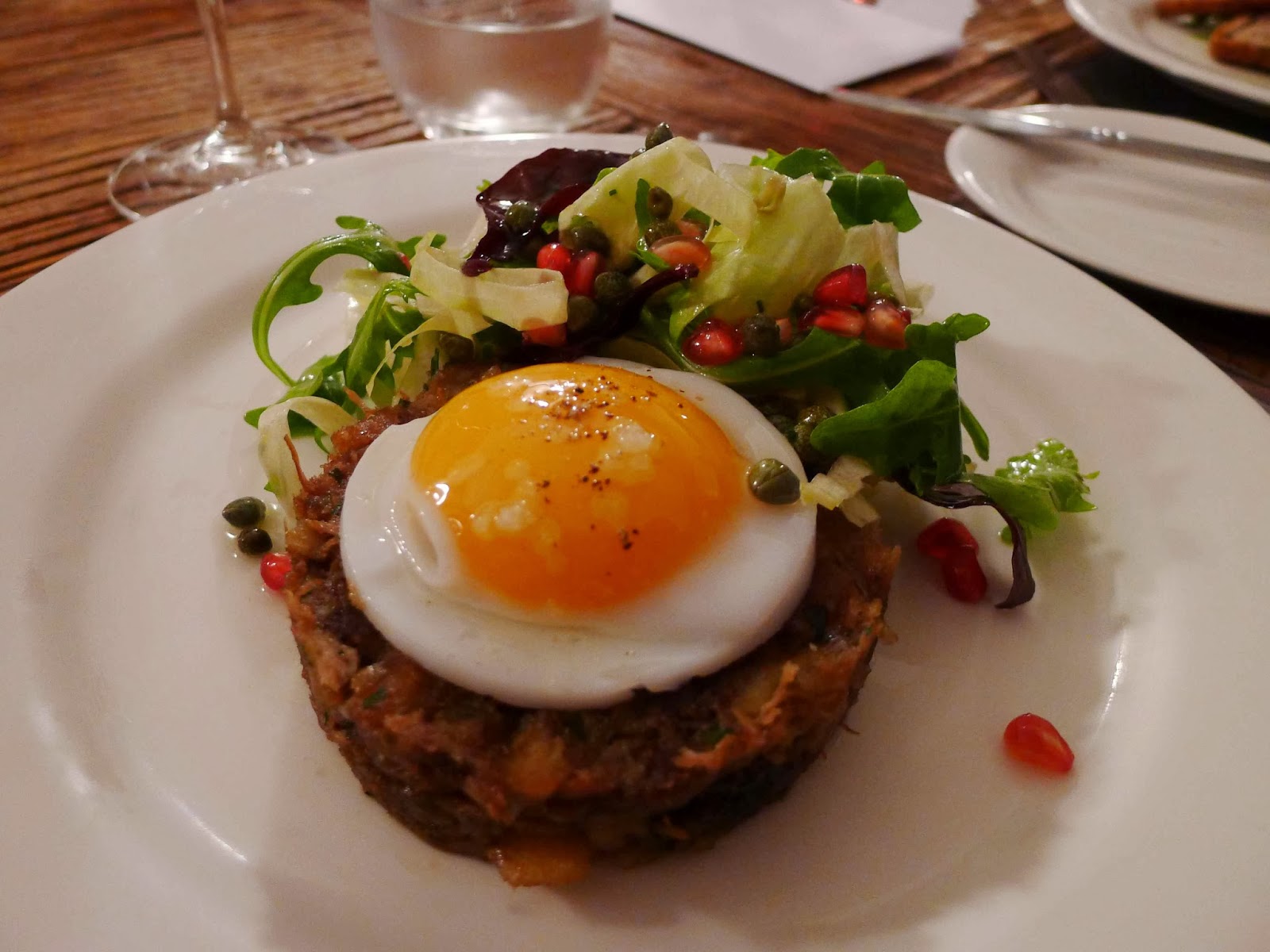 I’ll dream about our main course during many a cold Winter’s night to come – a taste of local beef (£54 for two).

Essentially, it was a 2x4 of slow-cooked meat...

Also nestled on the board were soft confit shallots and pots of bone marrow-laced bordelaise sauce. 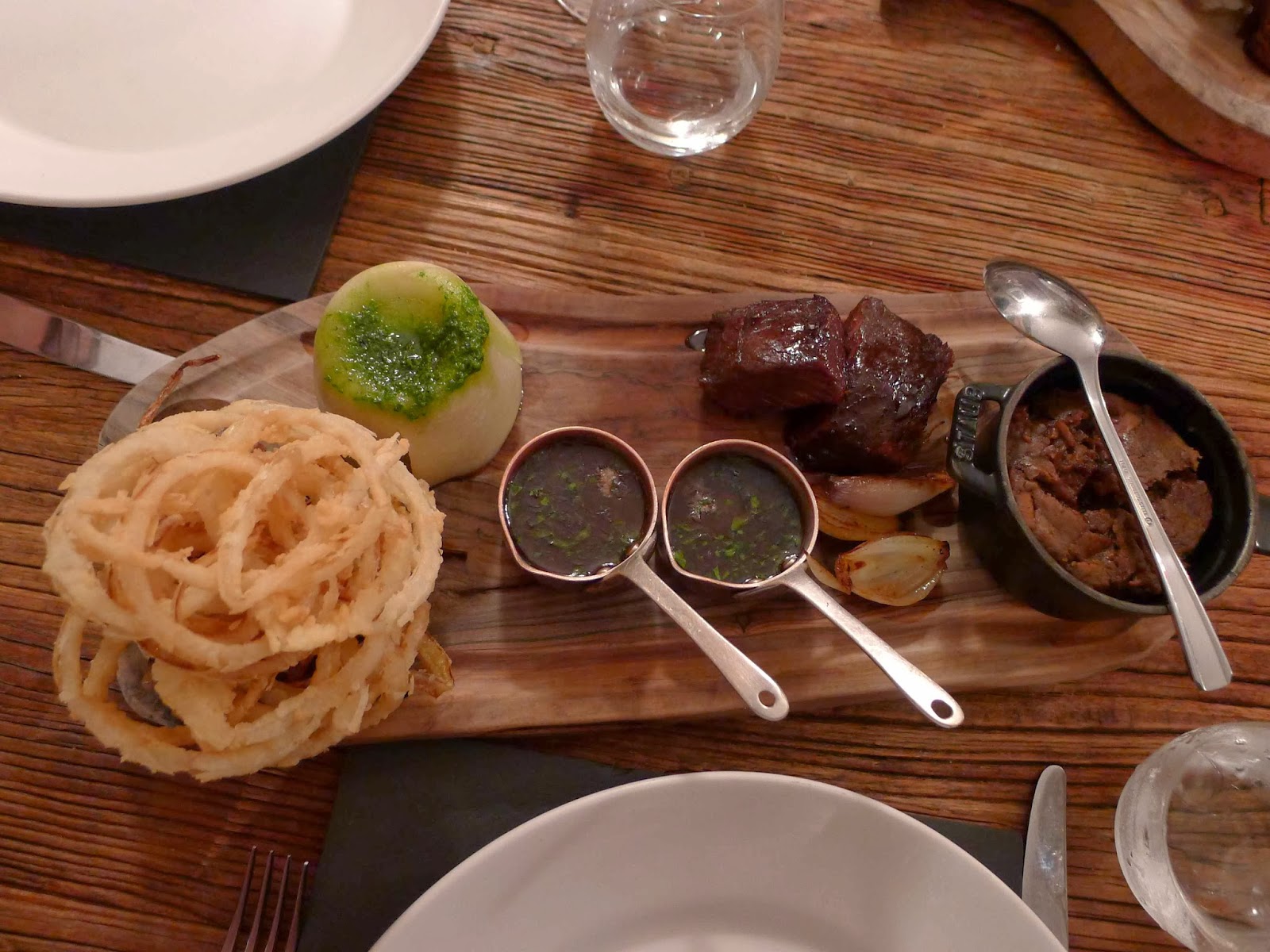 Sides were on point too – crisp triple cooked chips 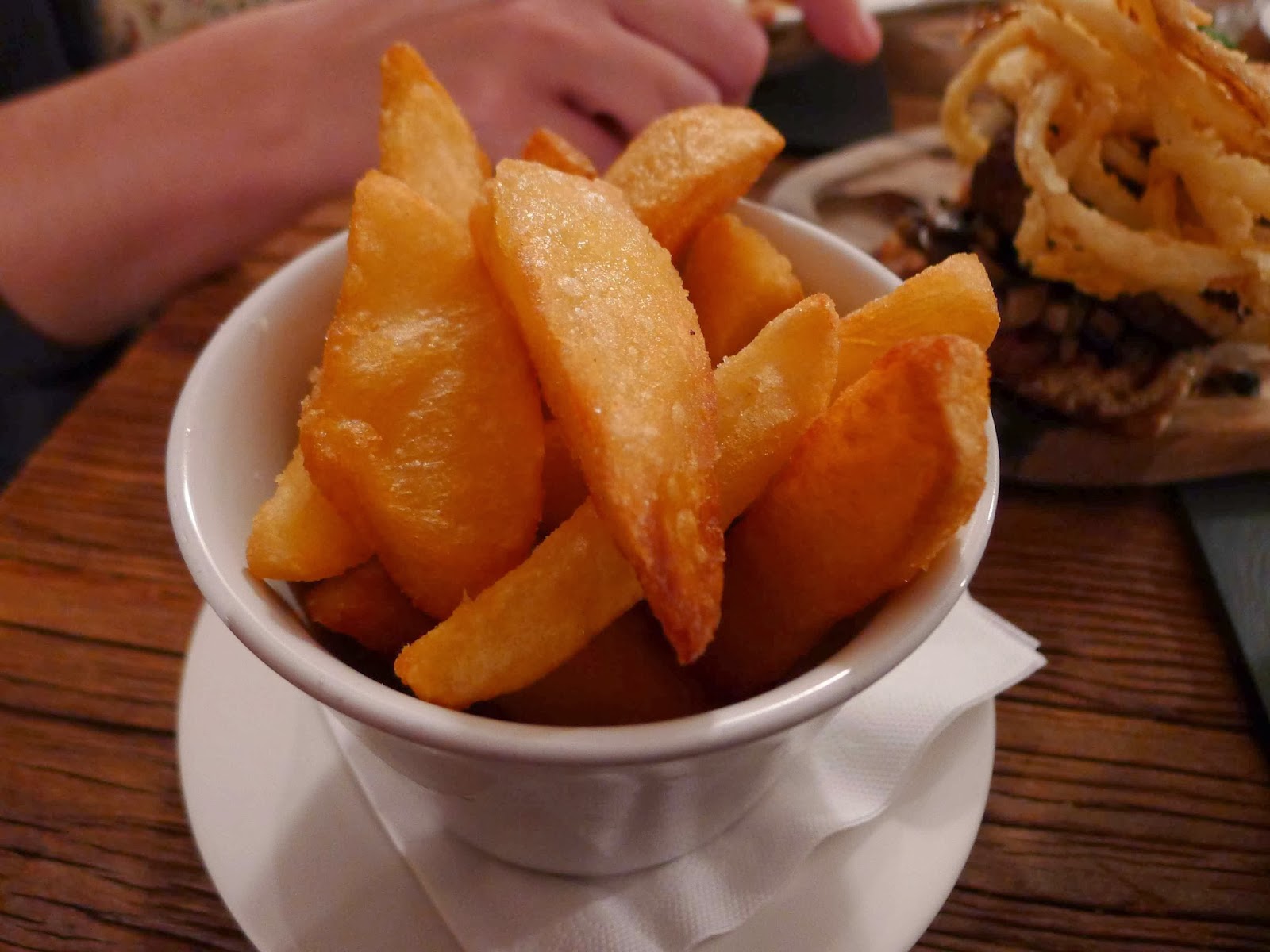 and a bowl of fennel, kale, greens, carrots and swede. 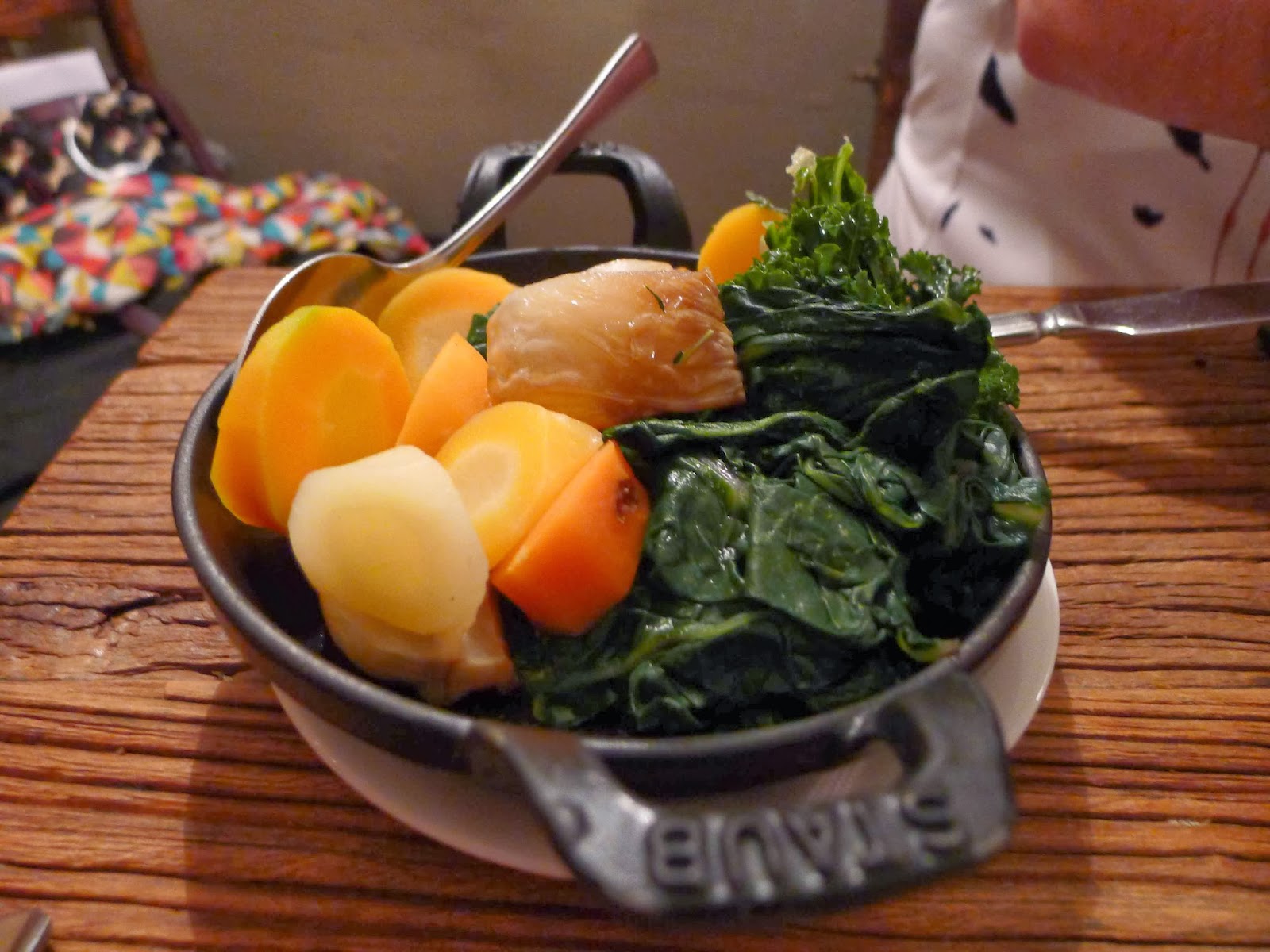 An additional order of courgette frites (£4.50) – strings of soft courgette in tempura batter adorned with a good measure of melted cheese – were scarily moreish. 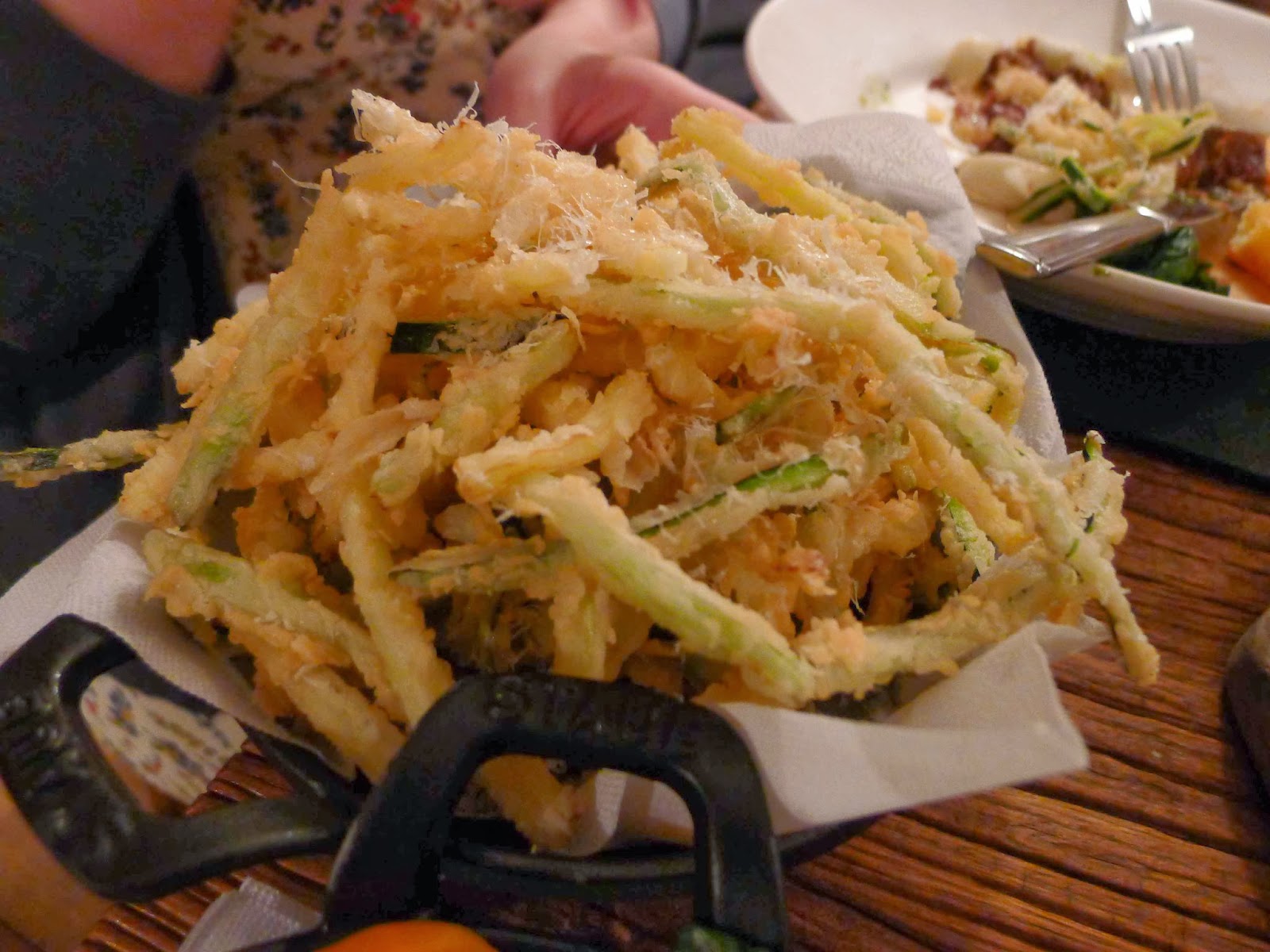 Replete, I attempted to finish everyone else’s mains and then moved on to dessert.

A trio of ice creams (£7) included a superb peanut butter and jelly flavour which tasted of both in equal measure, and a chocolate chip and honeycomb packed variety. Malted milk flavour was delicious but its subtlety was a little lost in comparison to its neighbours. 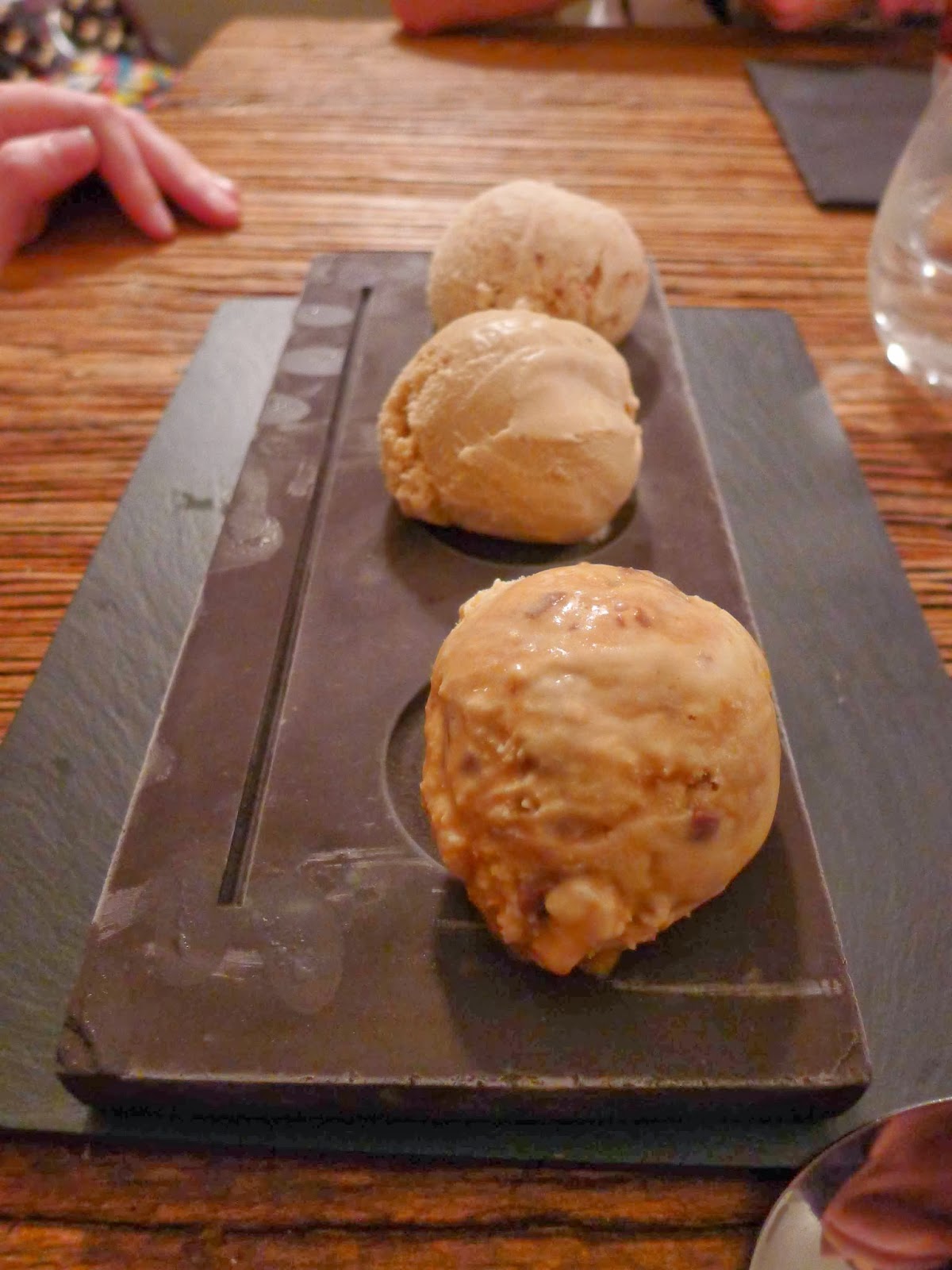 The smooth filling of a deconstructed baked cheesecake (£7) was studded with delightfully seasonal mincemeat from The Preservation Society. Scattered with crisp biscuit crumbs and served with winey poached pears, it was a brilliant seasonal pud. 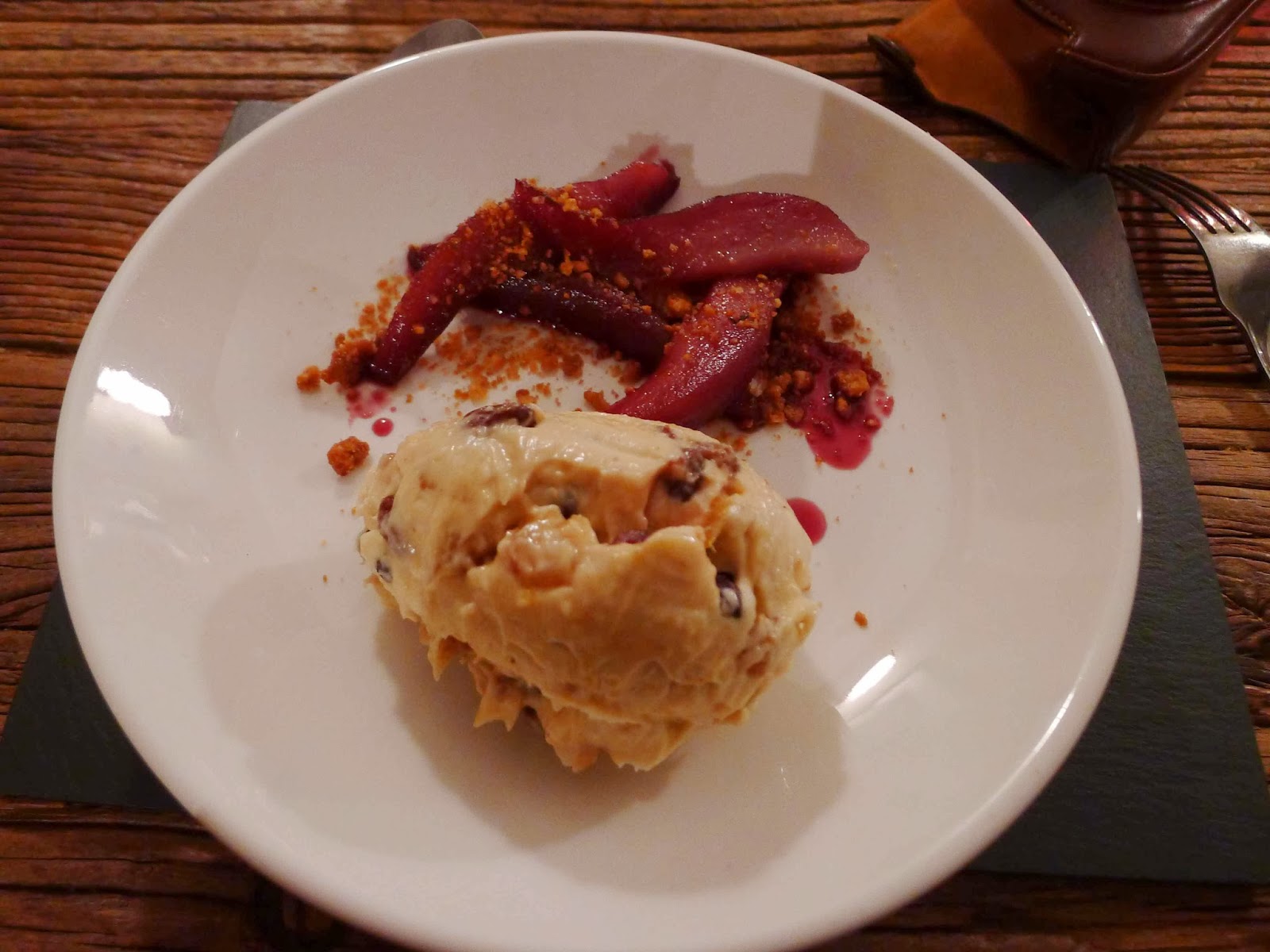 As you can probably guess, I like the Hardwick a heck of a lot.

In fact, what ever happened to Stephen Terry's plans to open a restaurant in Cardiff?...