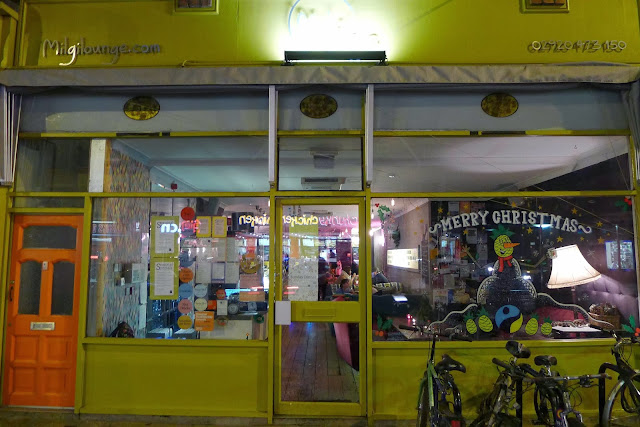 Milgi’s status as one of Cardiff’s best alternative boozers is unquestionable.

Their chilled out and unpretentious atmosphere, comfy sofas, epic selection of cocktails, Pipes beer on draught, eclectic décor, friendly staff, live DJs and yurt out back mean they have a lot of things going for them. 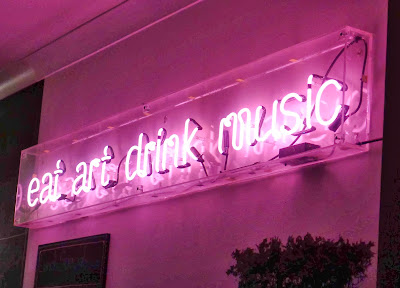 In addition to being a cracking bar, Milgi have also built a reputation for their ethical food.

However, despite having necked plenty of their mojitos we’d never eaten their grub.

The reason being, Milgi’s serves vegetarian food…with a little bit of vegan and gluten free thrown in for good measure.

With the large number of exceptional kebab houses in spitting distance I'd slipped into a comfortable routine of cocktails first, kebabs second. 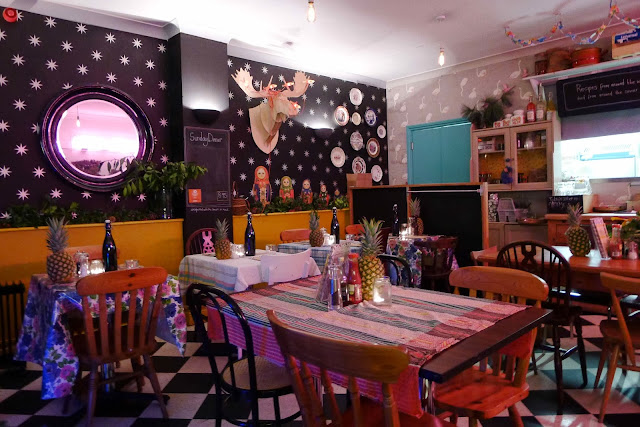 However, as I was dragging Mrs G along to a Friday night gig at The Globe, she succeeded in convincing me it would be a very good idea if we went for a meal at Milgi’s beforehand.

Cocktails, which we ordered whilst browsing the menu, were as awesome as always – a pair of textbook mojitos were laced with mint and a good whack of rum. Mrs G ordered a classic (£6.20) whilst mine had a fiery kick of ginger (£6.20). 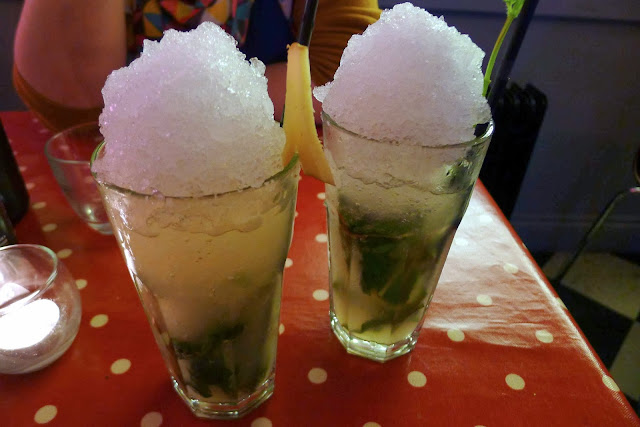 Surprisingly, I found it incredibly easy to pick something tasty sounding to eat. This is because Milgi’s menu is packed with the kind of food which is my shtick - cheesy, deep fried and spicy. 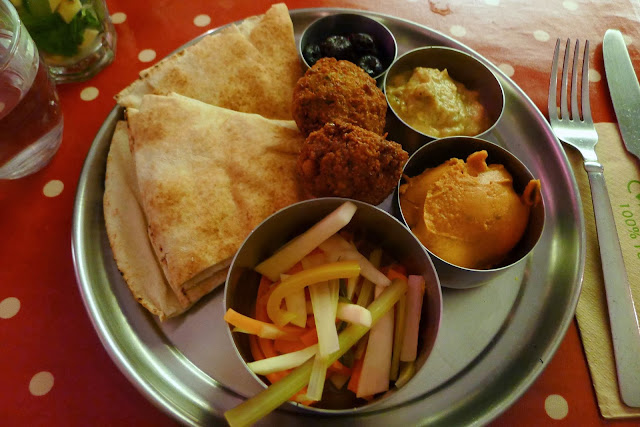 Mrs G’s starter was enjoyable but less remarkable (£6.95) – bruschetta with soft red onions and goat’s cheese were a touch dried out as a result of too many minutes spent under the heat lamp at the pass (the same fate befell the flatbreads served with my platter). An accompanying side salad of micro-herbs with dill oil, however, was excellent. 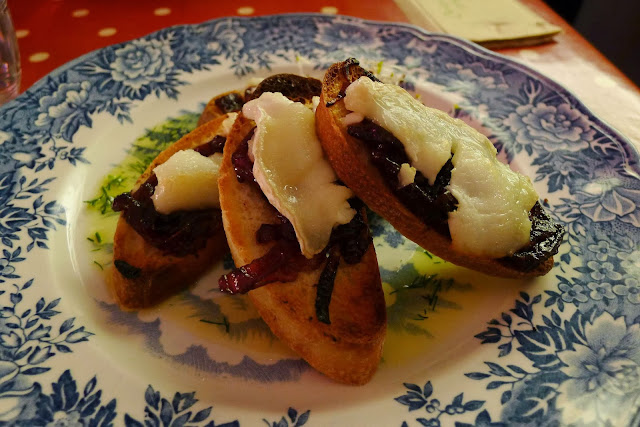 Onto mains, and my dish of beer battered halloumi and chips (£9.50) was pretty frigging excellent.

Crisp, light batter cocooned oozing, salty cheese. Chips were on the nail too. The only let down was a side of mushy peas which were utter bupkis – overly minted, too hard and made from garden peas; give this northerner marrowfats any day of the week. 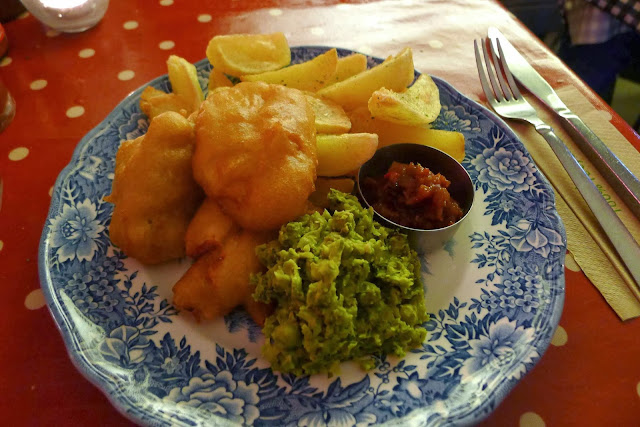 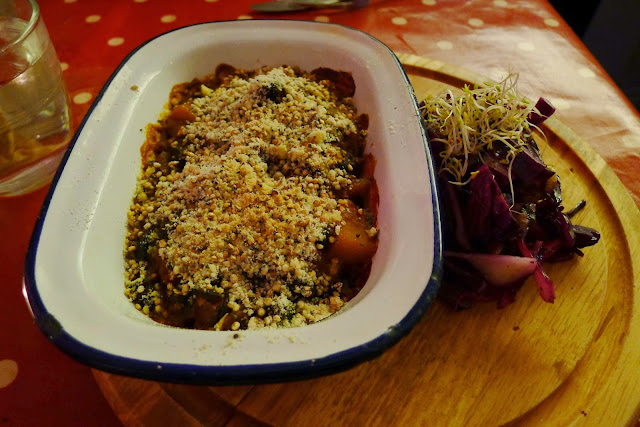 Desserts maintained the theme of the rest of meal – success for me whilst Mrs G was left underwhelmed. 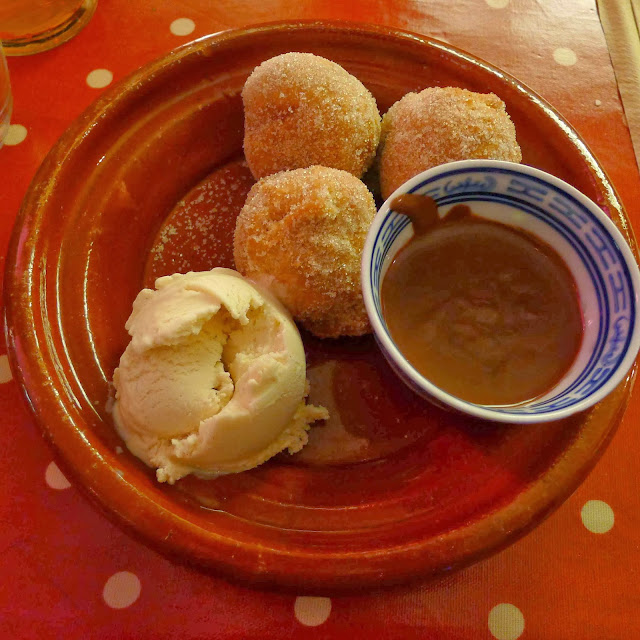 Mrs G bombed out with a stodgy and dry banana and peanut butter bread pudding (£5.50) which more closely resembled a muffin. On the positive side, the accompanying ice cream was good... 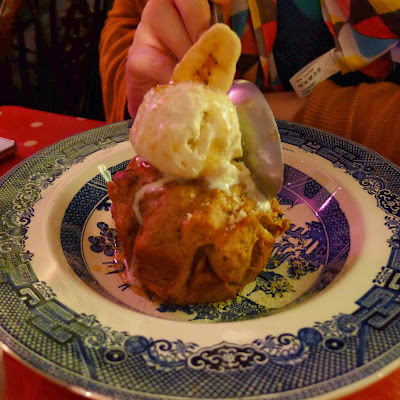 So, our meal at Milgi’s didn’t quite turn out as expected.

In fact, I’m shocked to say that next time we’re having drinks I’ll enthusiastically propose eating dinner in a vegetarian restaurant. Mrs G, however, will most likely suggest going for a kebab…