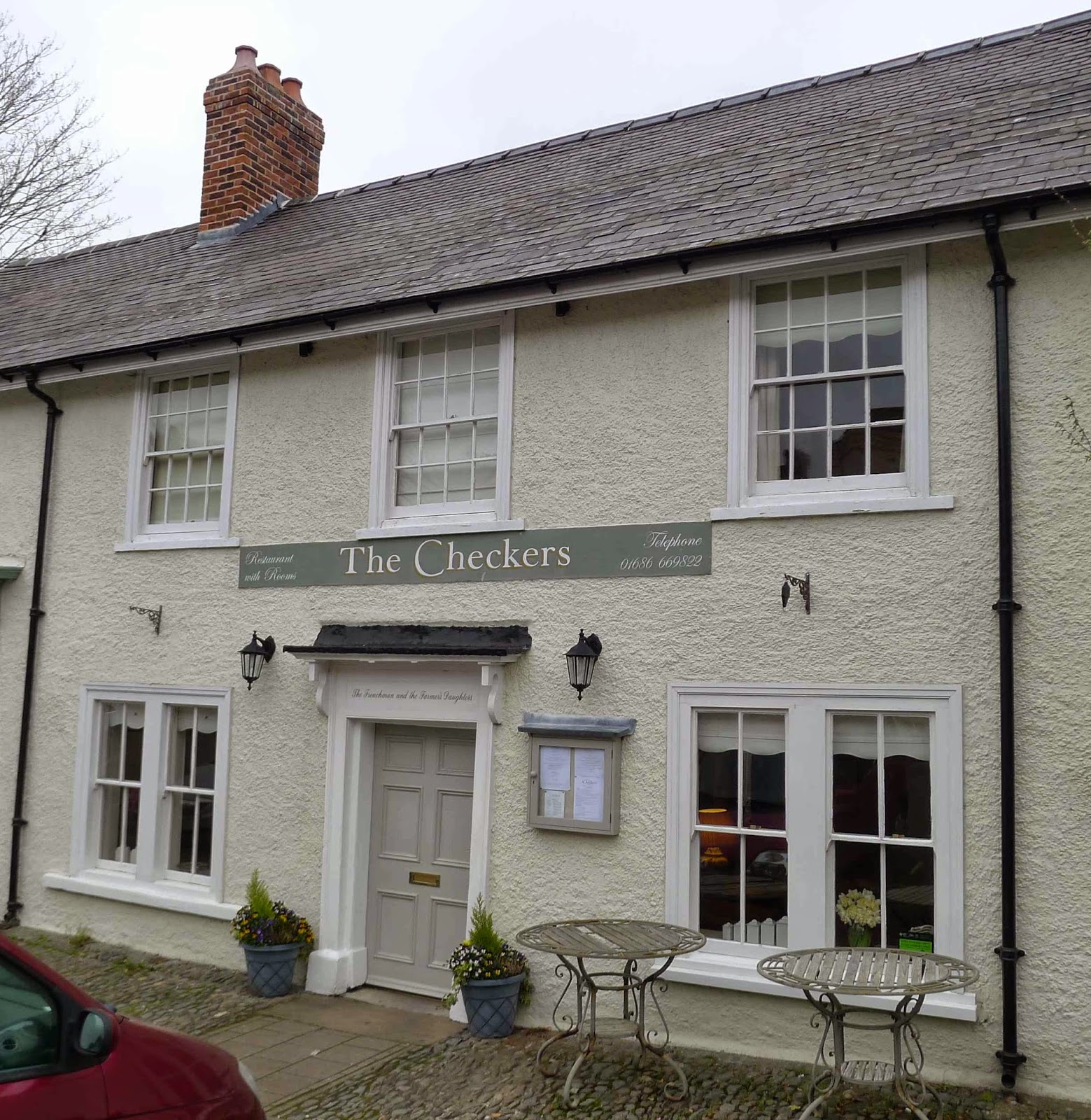 In the five or so years that I’ve been living in Wales I’ve seen some incredible sights.

The breathtaking beaches of Rhossili and Barafundle, mountainous Snowdonia, Chippy Alley at 2am on a Saturday night, and the puffins of Skomer Island have been just a few of the wonders I've witnessed.

However, until last weekend I’d never visited the bit in the middle.

But, after an afternoon checking out Powis Castle’s majestic peacocks and whopping topiary, I’ve added another incredible Welsh destination to my road-trip arsenal.

And, it also happens to be a fifteen-minute drive from The Checkers…

The Checkers, a restaurant with rooms situated in the weenie, picturesque town of Montgomery, is very much a family affair - head Chef Stéphane Borie is married to head pastry chef Sarah whilst her sister Kathryn runs front of house.

This translates into a passion which exudes from every wooden beam of this renovated coaching inn; front of house is relaxed yet precise whilst the remarkable French food is daintily brutish.

And, having gained a Michelin star just seven months after opening in 2011 (currently one of only three in Wales), the family team have been richly recognised for their dedication. 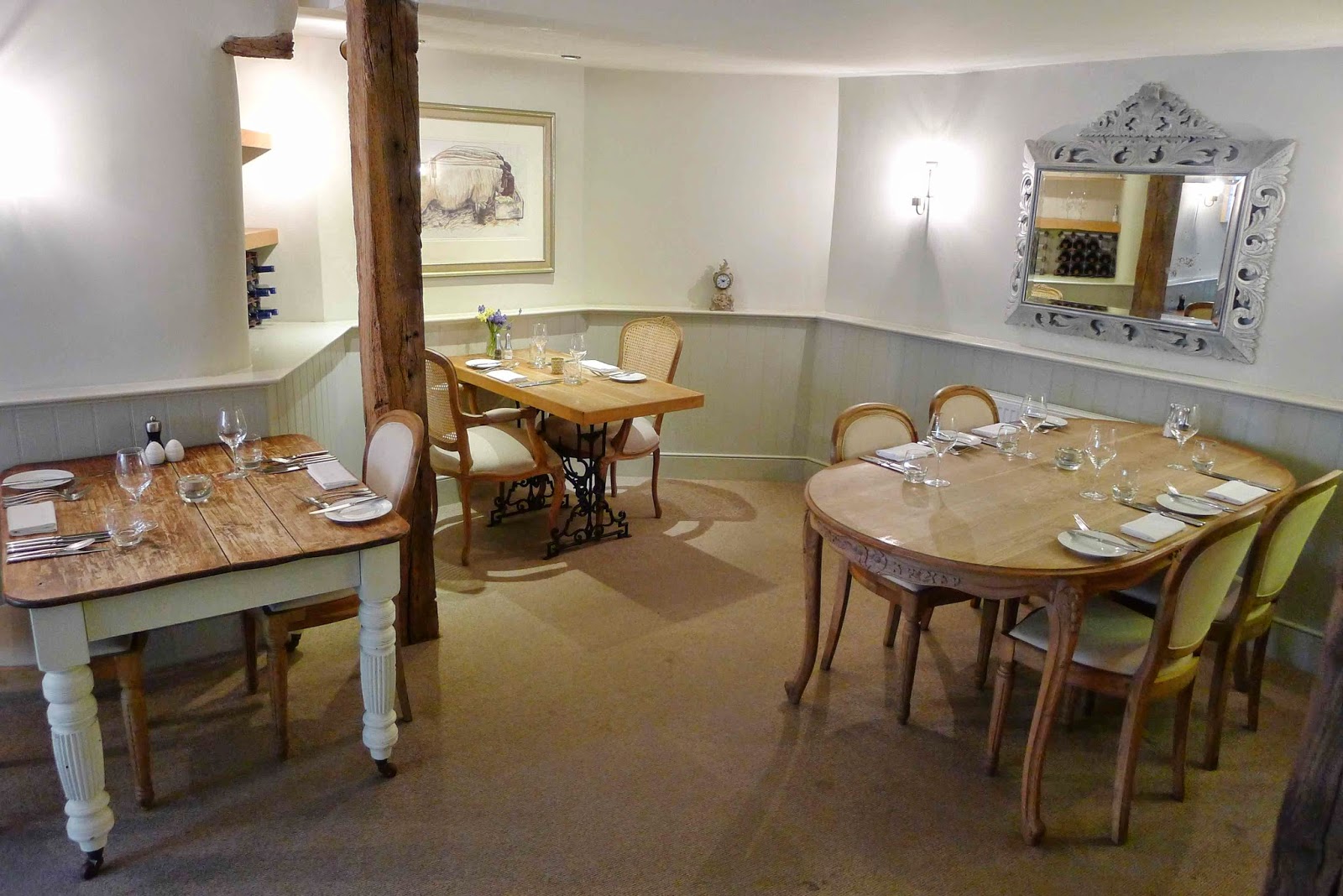 Whilst there’s an a la carte menu, which weighs in at approximately £12 a starter, £28 a main, and £9 a pudding, you’ll already know that as a fully paid-up fatty I ordered the 7-course tasting menu (£75).

Pre-dinner drinks were accompanied by a trio of canapés – a warm, sweet beetroot meringue sandwiched with subtle horseradish; a crumbly parmesan biscuit topped with a delicately tangy goats cheese cream; and a luxe pork scratching with a mustard mayonnaise dip. 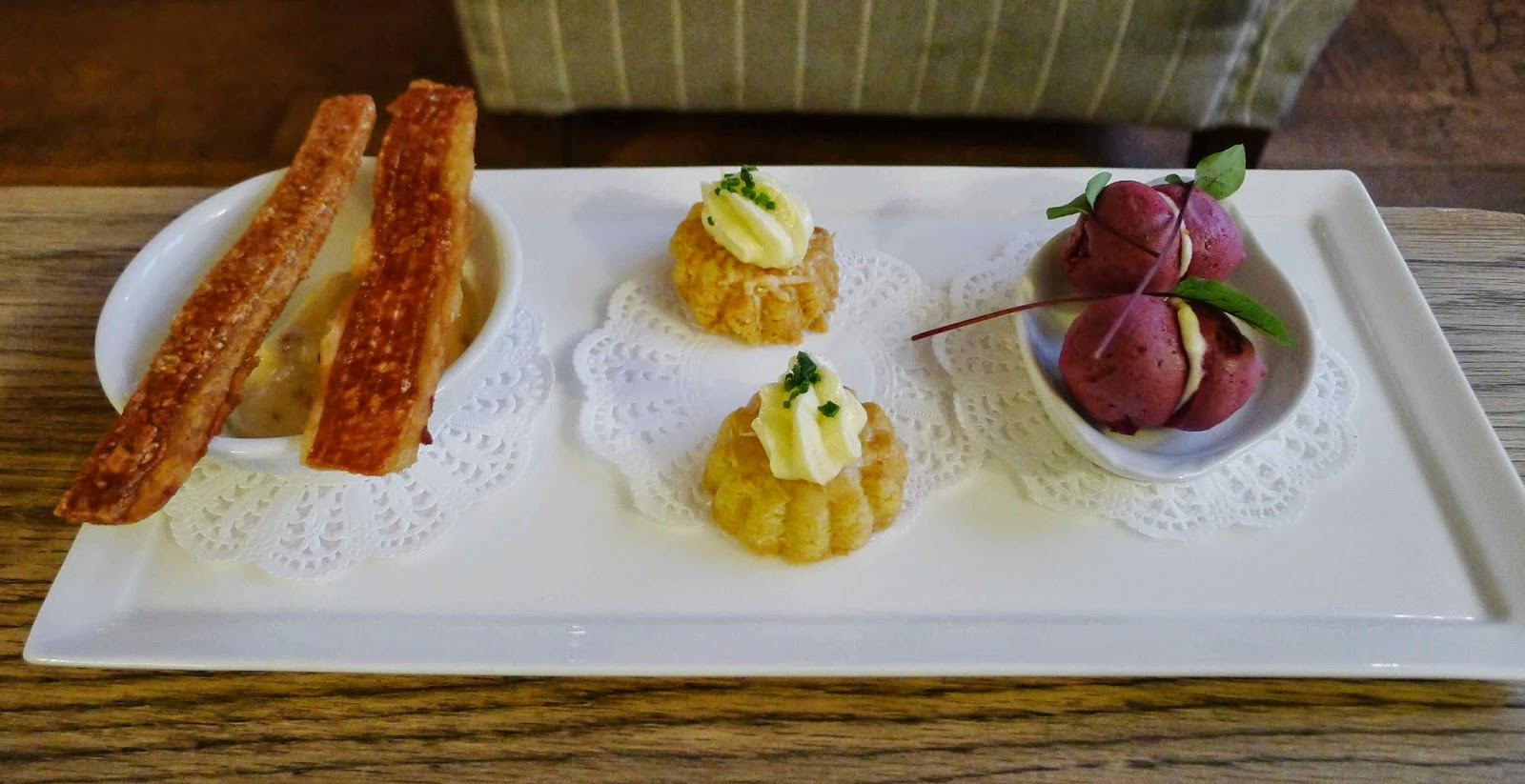 Amongst a fine selection of warm bread, a pumpkin roll and a slice of sultana loaf were the standouts. 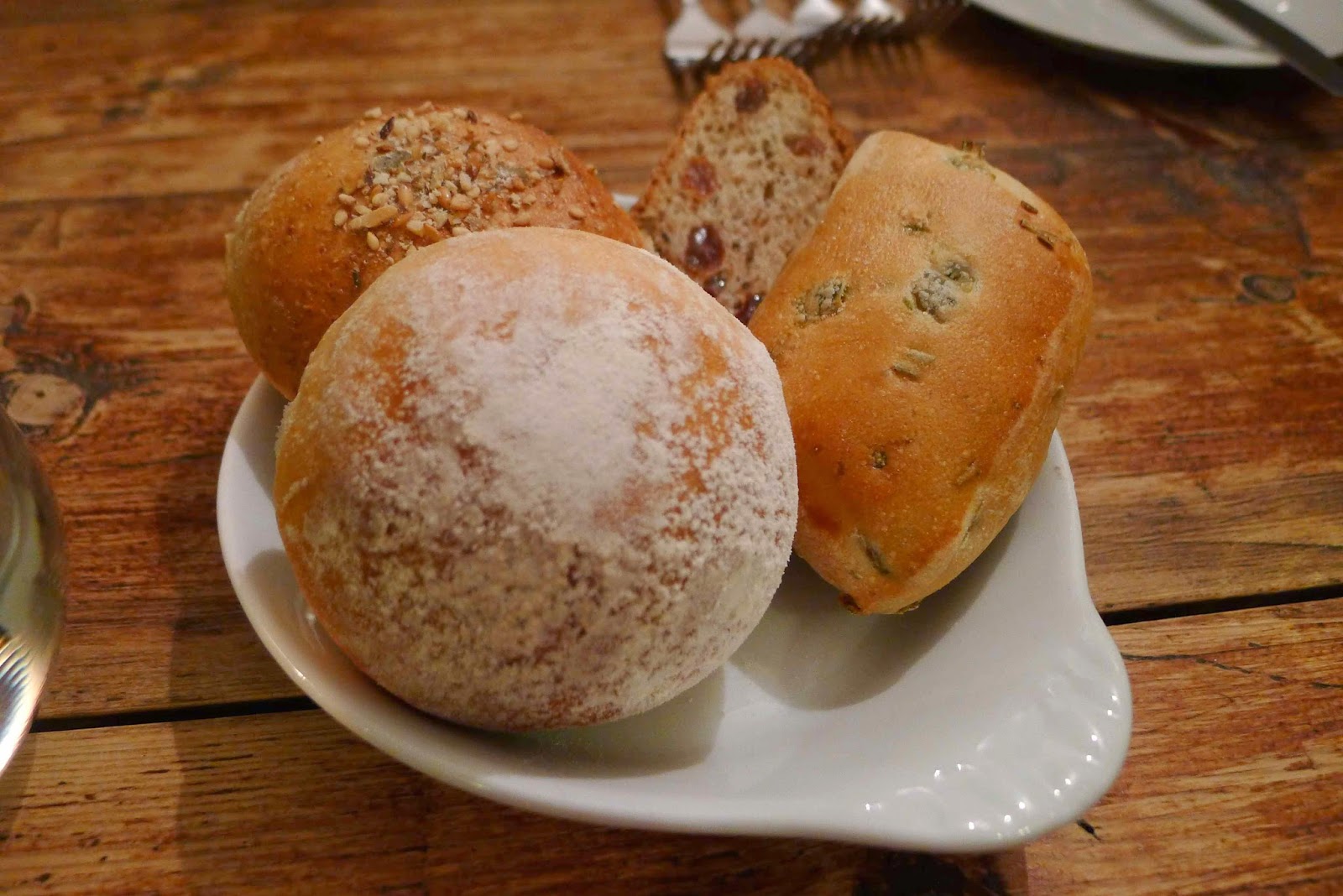 The first course proper was a creamy cauliflower velouté jewelled with floating goodies – flakes of smoked haddock, a silky quail’s egg which slipped down the hatch in one and pieces of cauliflower which I felt were just a touch too al dente. 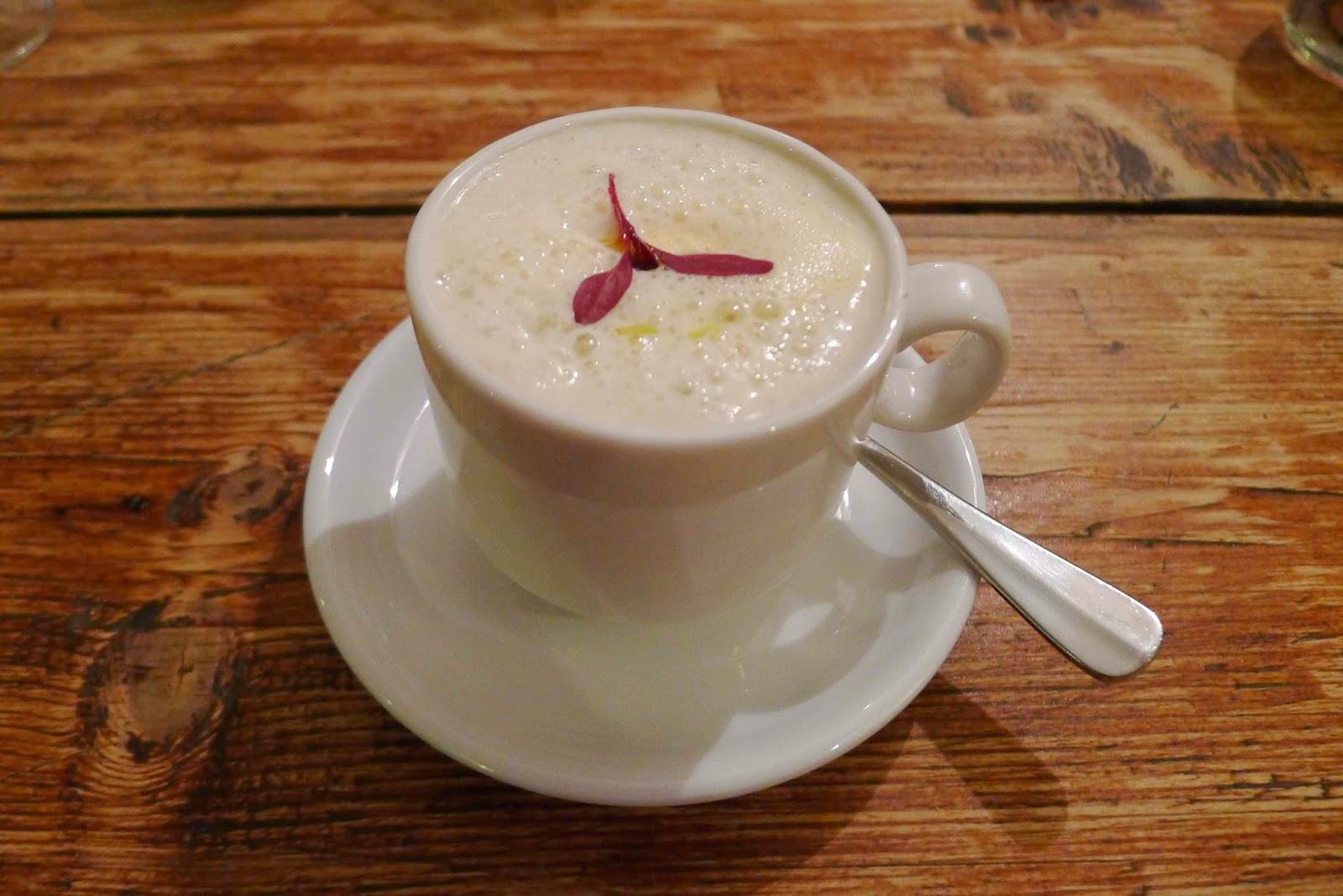 Home smoked salmon was a plate of perfection; crisp skin, yielding flakes and a hit of intense smoke were accompanied by a sweet white onion puree and the richness piercing properties of sage and lemon oil. 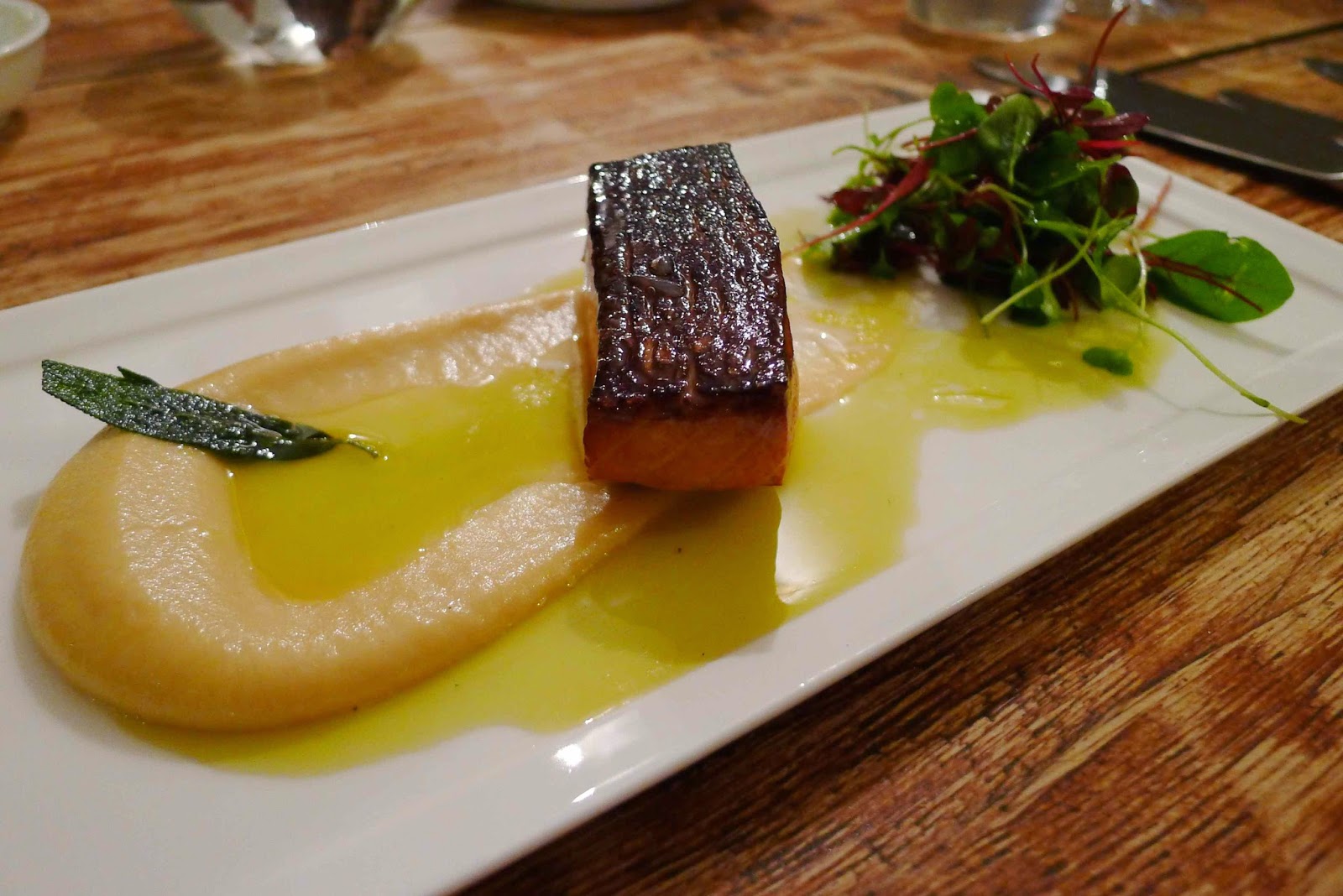 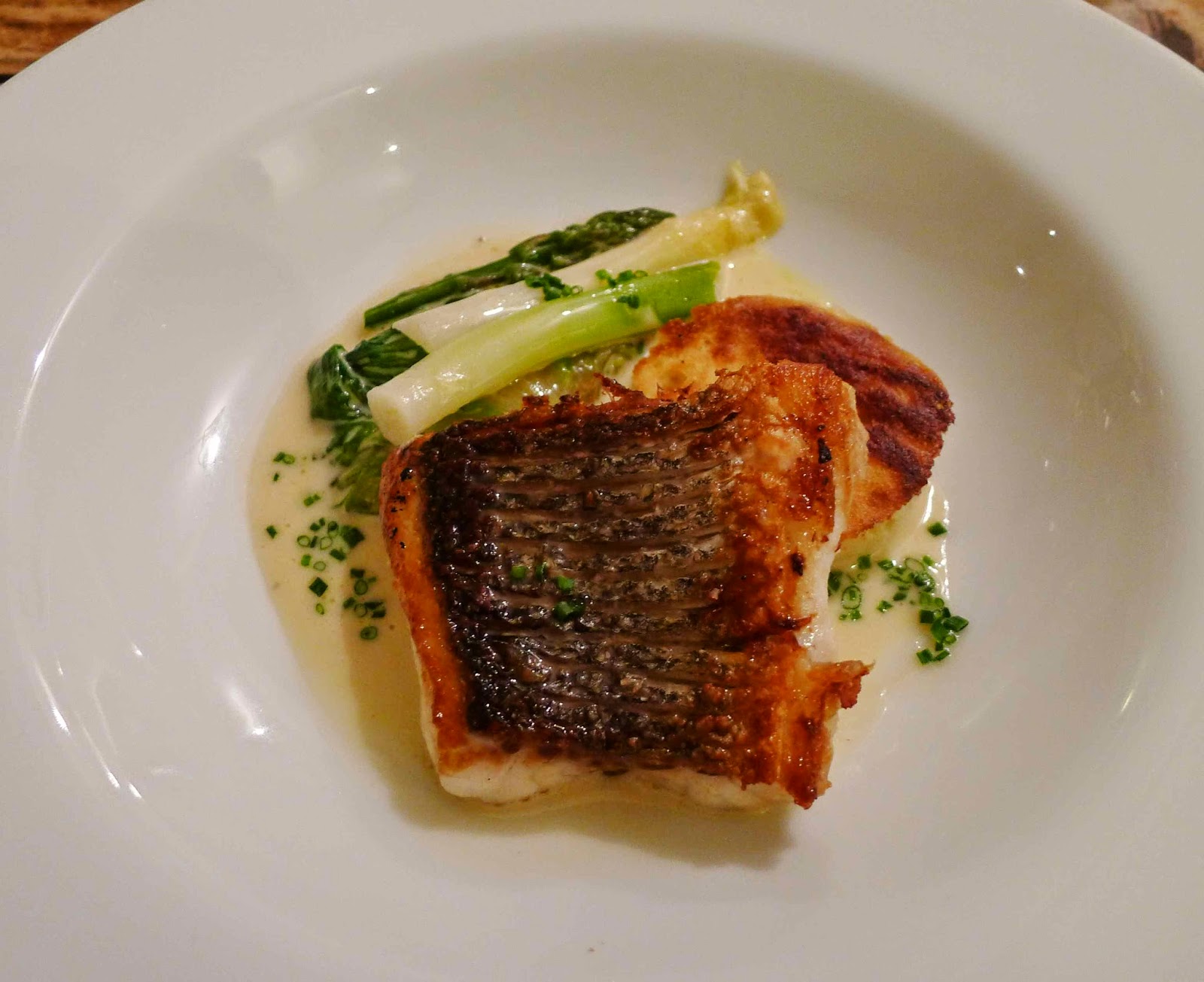 Whilst the previous course was one of comparative lightness, the next two dishes followed the age old recipe for culinary success: Tasty = (meat + butter)2. 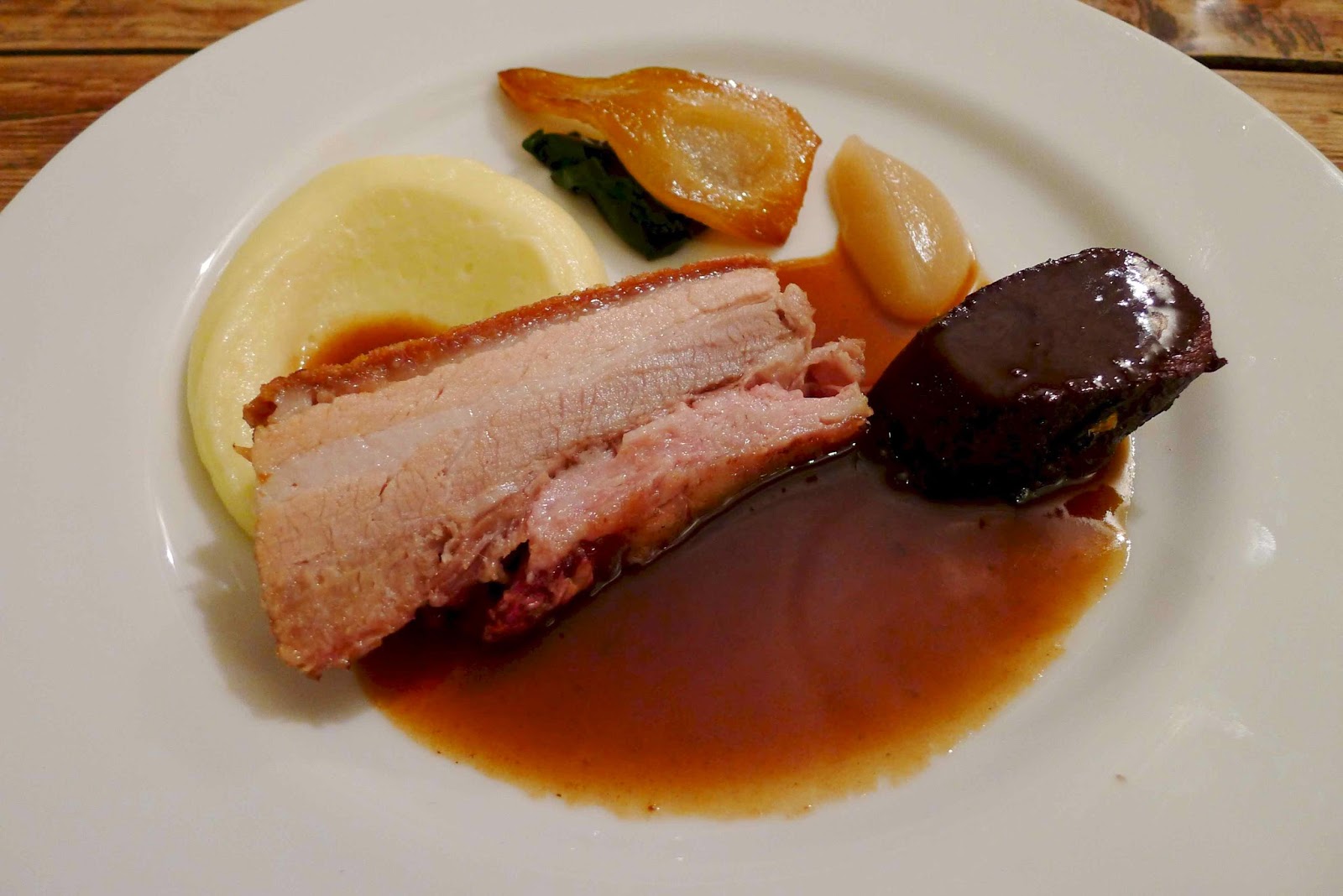 The indulgence didn’t let up with the next dish either - steak so tender it could be cut with a spoon, a garlic-whacked pomme fondant, unctuous ox-tail coated in golden breadcrumbs, asparagus puree; a deep red wine jus and asparagus (which was of course coated in pancetta). 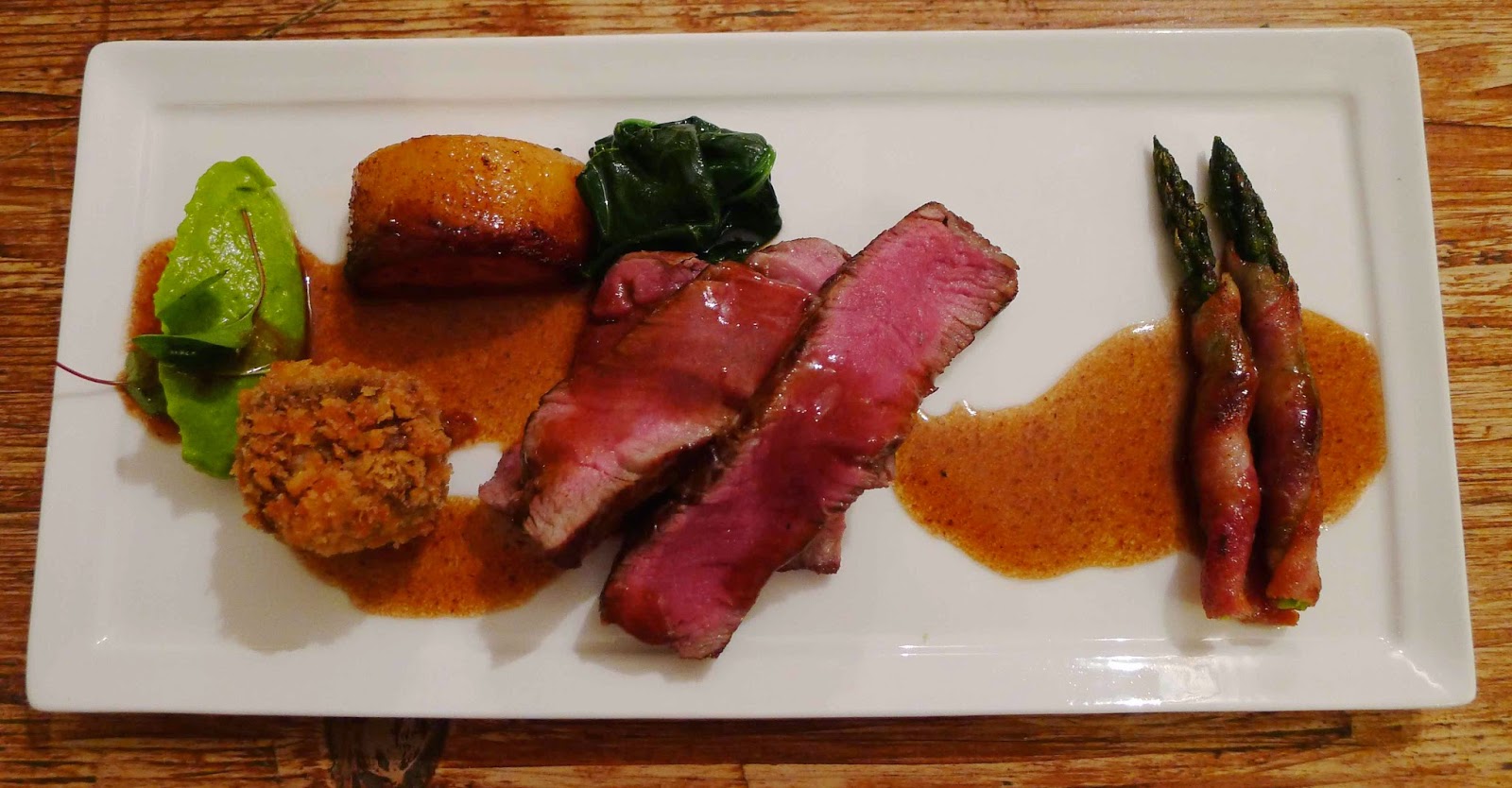 My dessert from the tasting menu was rhubarb crumble soufflé. Whilst its cloud-like lightness contrasted well with the crunch of crumble pieces, it required a bigger hit of tart rhubarb to balance the dish’s sweetness. 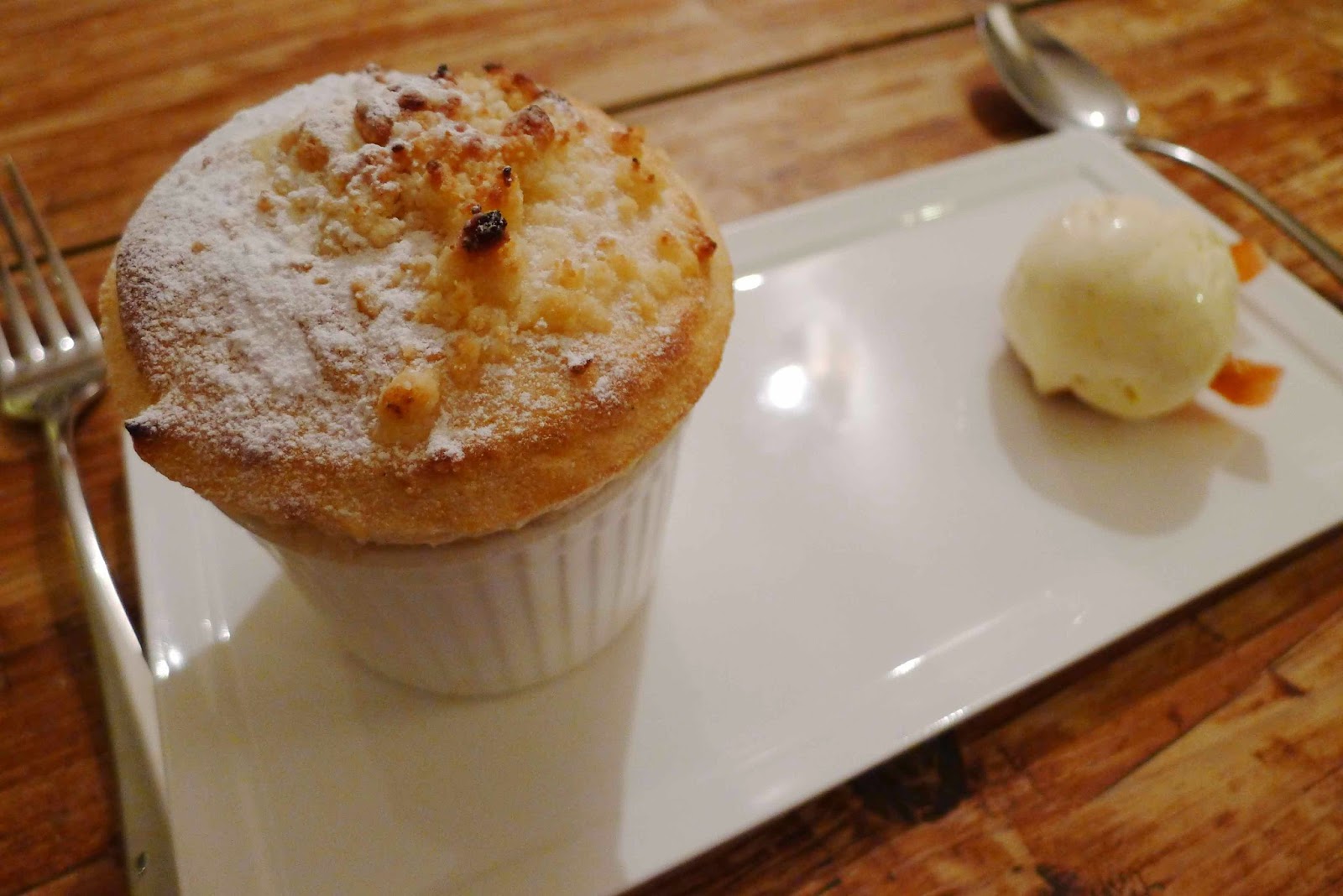 As Mrs G isn’t a fan of rhubarb she subbed her dish for another off the a la carte – a tasting plate of lemon and ginger desserts. A creamy yet sharp lemon cheesecake with a buttery biscuit base, a scoop of stem ginger flecked ice cream and a preternaturally thin-crusted lemon tart were all frigging lovely. 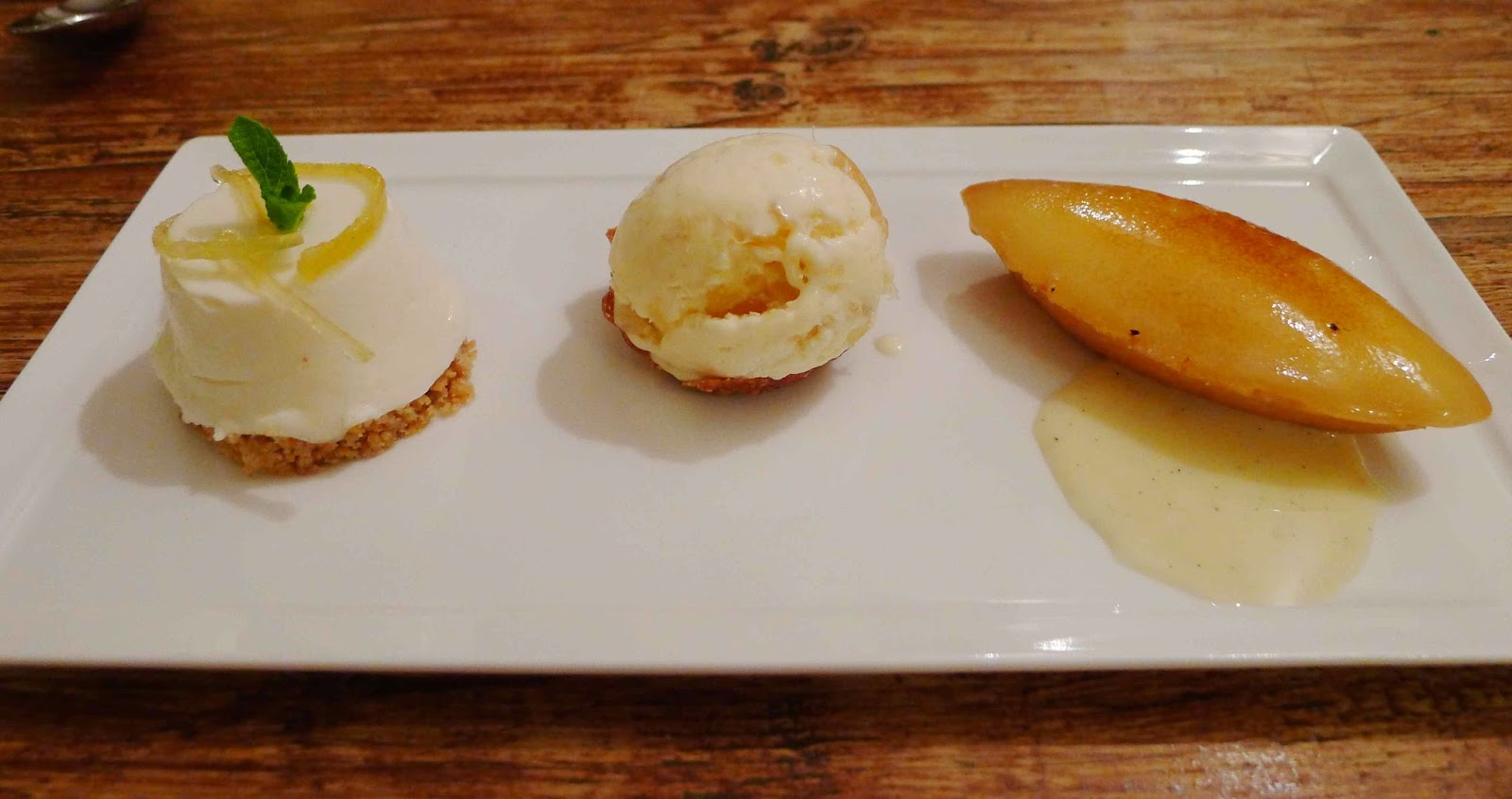 Stuffed, we eschewed coffee and petit fours in favour of a stroll around the moonlit town square.

Rather thoughtfully though, a selection of truffles was boxed up for the following day’s journey. A major improvement on my usual bag of Haribo, they made the scenic drive home from one of Wales’s culinary jewels all the more pleasurable.