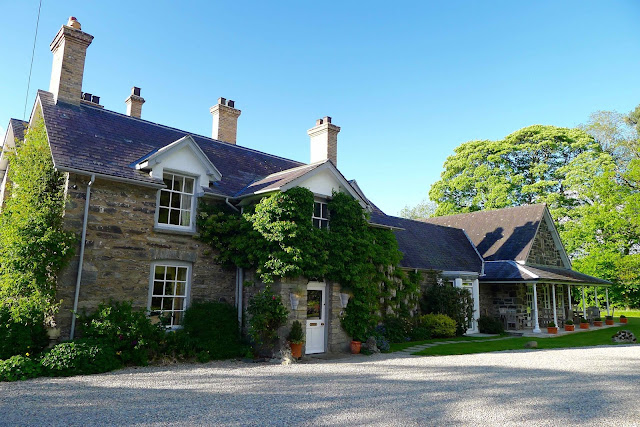 That’s what Tyddyn Llan in Denbighshire is. From the Lladro sculpture collection, to the floral curtains, to the food, it’s the most traditional of Wales’s Michelin-starred restaurants.

The chef-patron is Bryan Webb, an old master of the British restaurant scene who previously ran London’s legendary Hilaire for fourteen years. He opened Tyddyn Llan in 2002 before picking up a Michelin star in 2010.

There are no foams, gels or unusual flavour combinations to be seen on the menu; just classic ingredient driven dishes cooked with French technique. 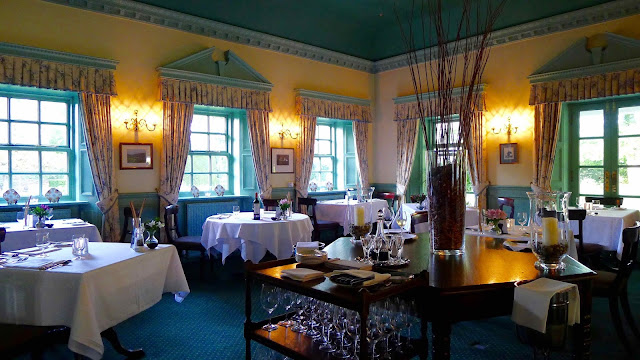 Canapes consisted of a lovely mini scotch egg with a sadly set yolk, a sweet caramelised red onion tart with proper flaky pastry, a cod fishcake loaded with parsley and a mini-round of smoked salmon filled with a dill-laced mousse. They were all super delicious but I’ve eaten something similar, if a lot less well executed, at many a canapé reception. 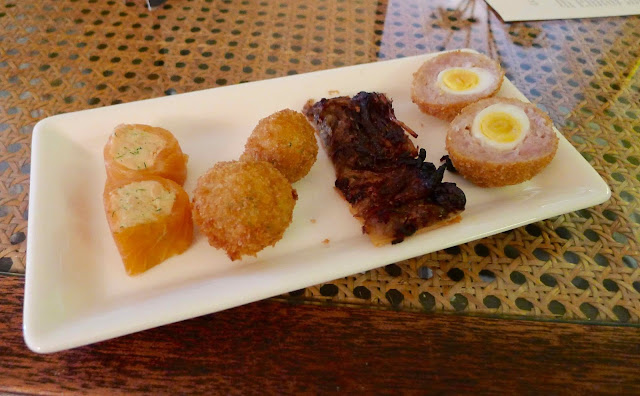 A generous basket of white and wholemeal bread and crisp breadsticks were bang on. 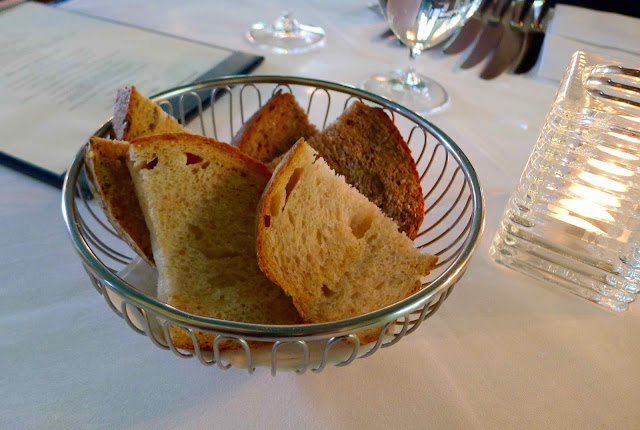 Asparagus soup kicked the meal off. It was lovely but another flavour or texture contrast would have added interest to the dish. 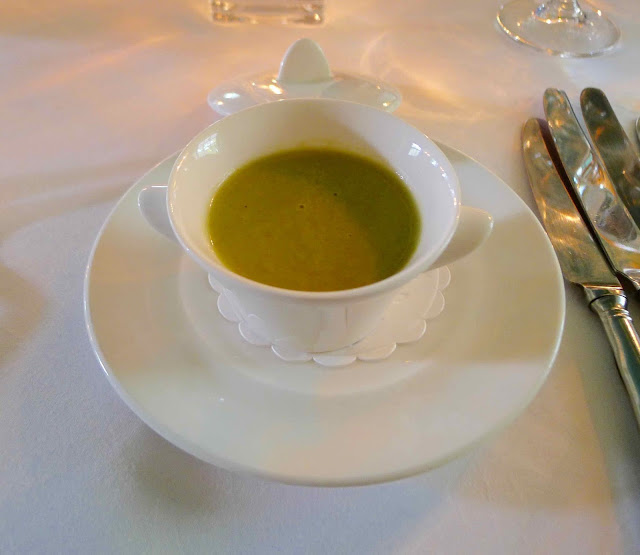 A trio of first rate langoustine were served with fresh-flavoured guacamole and shavings of fennel and radish. 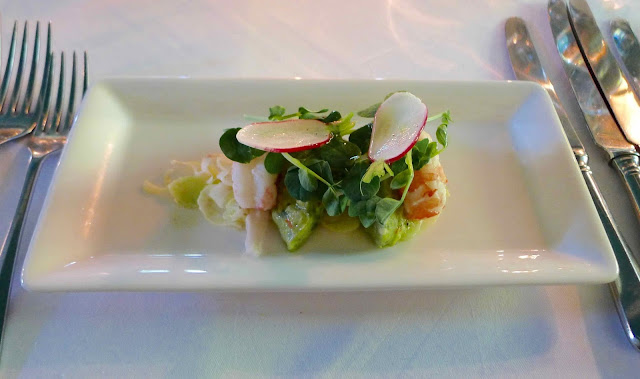 Foie gras and chicken liver parfait is one of Mrs G’s all time favourite dishes and this was the best example she’d ever eaten. These classics cooked faultlessly aren’t so bad after all. 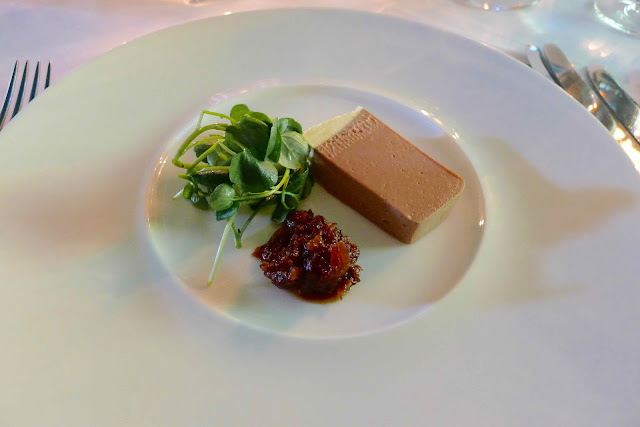 The parfait was joined by light toasted brioche and a great onion chutney. 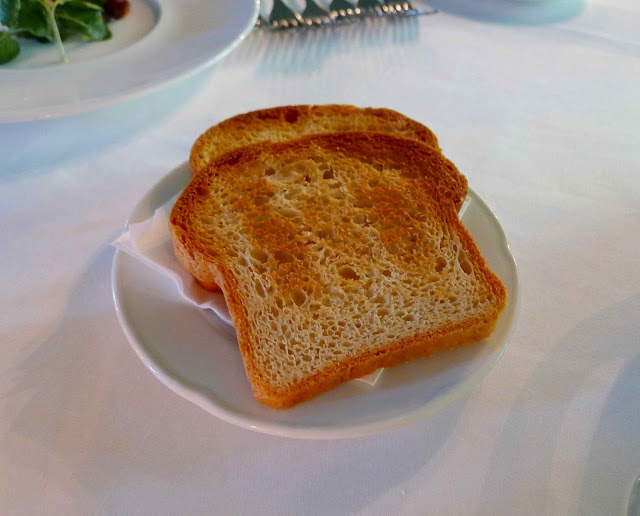 I really enjoyed a burnished scallop that was topped with crisp pancetta crumbs and served with smooth cauliflower puree and a caper and raisin puree that had a good sweetness and sharpness. 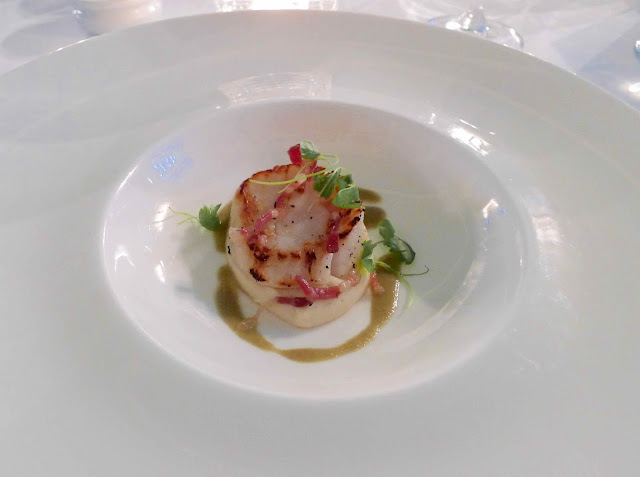 Fresh asparagus with a savoury dice of St George’s mushroom and a crispy egg was lovely. There was just a lot of asparagus in proportion to the other elements on the plate. 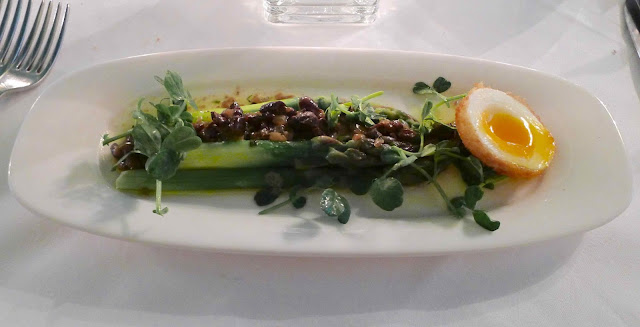 A tender, crisp-skinned fillet of hake was accompanied by samphire and a butter sauce with and without the savoury hit of laverbread. I had this dish years ago when Webb did a guest chef night at Wales Millennium Centre. I loved it then and loved it this time too. 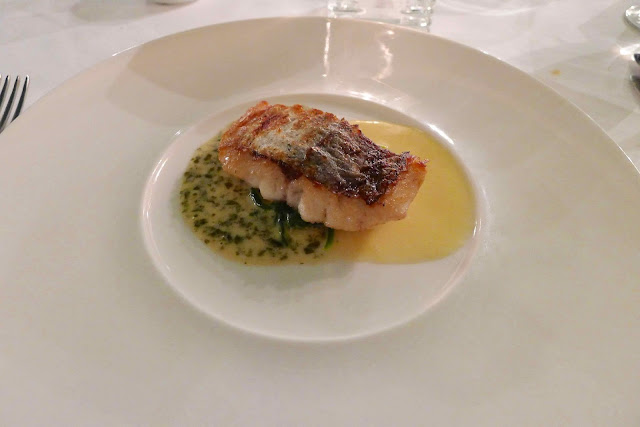 For main course there was a choice of two dishes. Both were faultless pieces of cooking. A stellar piece of duck came with an offal rich duck faggot, a stack of confit potato flecked with even more duck, a dollop of uber buttery potato puree, wilted greens and a classy cider and apple sauce. It’s also worth noting the portion size for a tasting menu. Whopping. 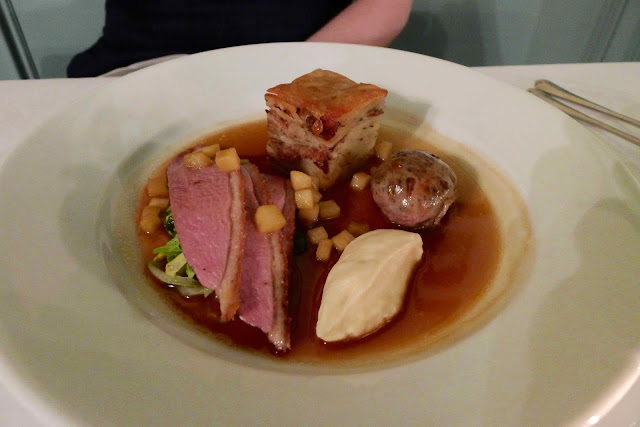 My pair of lamb cutlets were also perfection. Served with a round of unctuous lamb shoulder, a couple of compellingly punchy deep-fried garlic cloves and finely diced vegetables, it was a great dish. 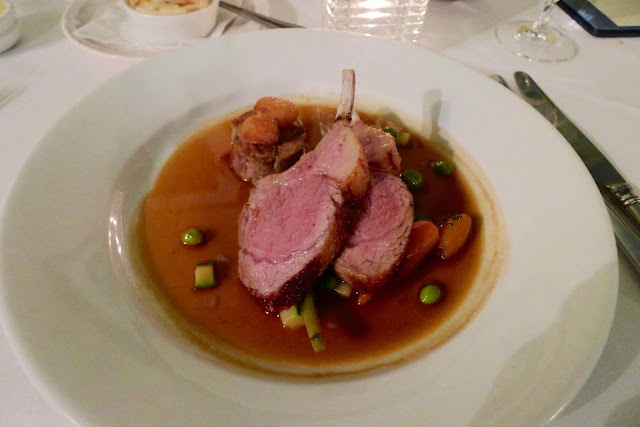 A pot of super cheesy and buttery potato gratin was the icing on the cake. 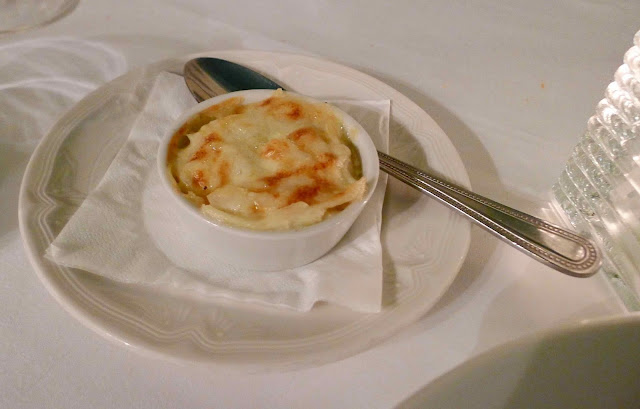 Mrs G admitted defeat at this point so I valiantly plowed on.

A cheese selection was a who’s who of the best of British supplied by Neal’s Yard. It included mega Stichelton, Brie-like Baron Bigod and nutty Hafod, amongst others. 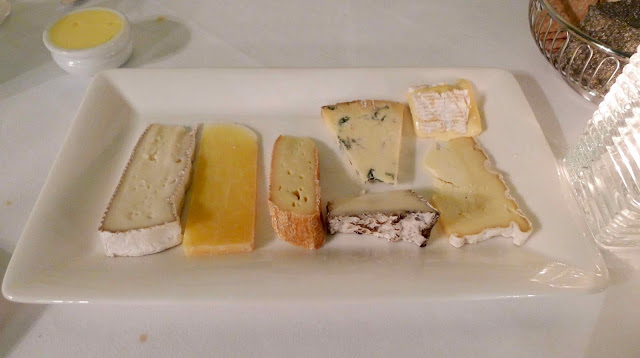 They were served with a bountiful bowl of interesting crackers and a lovely fig and almond torta. 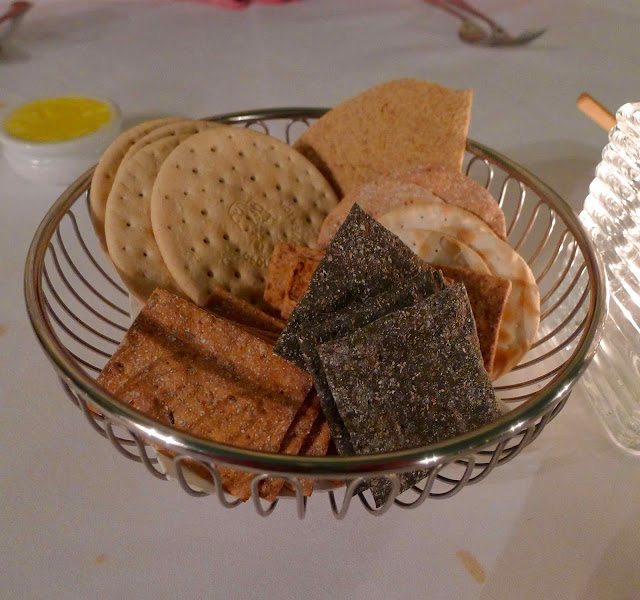 Desserts were also both great (you have a choice of four). A flawless fragrant pistachio creme brulee was topped with a scoop of the smoothest of vanilla ice creams. 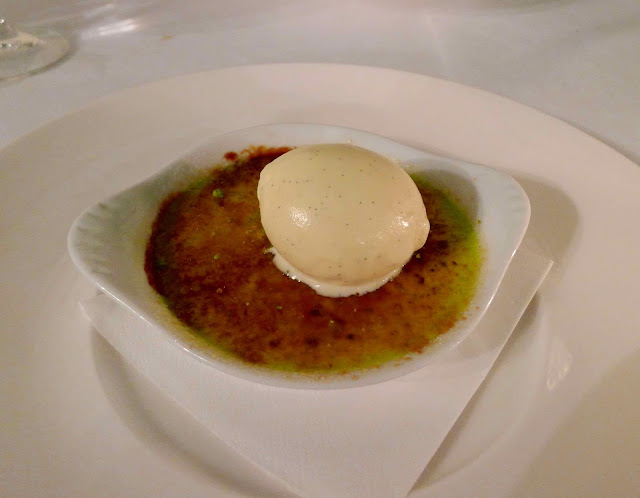 Cherry soup comprised of a bowl of sweet poached cherries in a light cherry broth with the gentle warmth of booze. It was finished off with a scoop of gorgeous cinnamon ice cream. 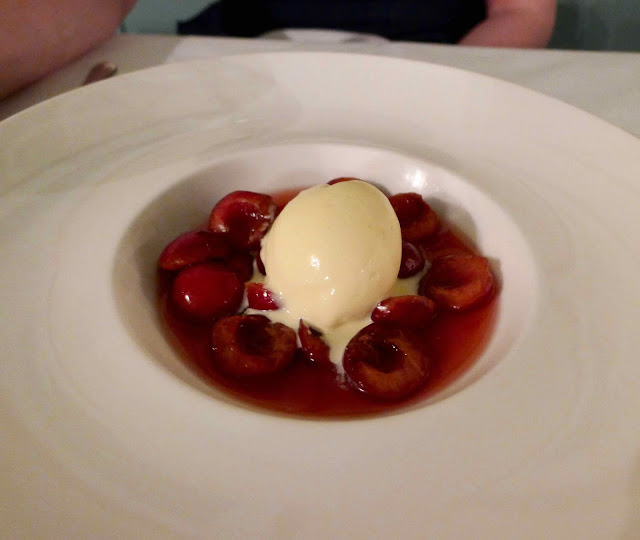 Dinner at Tyddyn Llan was lovely. However, a couple of the dishes lacked edge and the pace of the friendly service dropped off at times.

I’d recommend a visit if you like your fine dining classical and generously portioned. If you’re looking for whizzes and bangs and innovative flavour combinations, this isn’t the place.