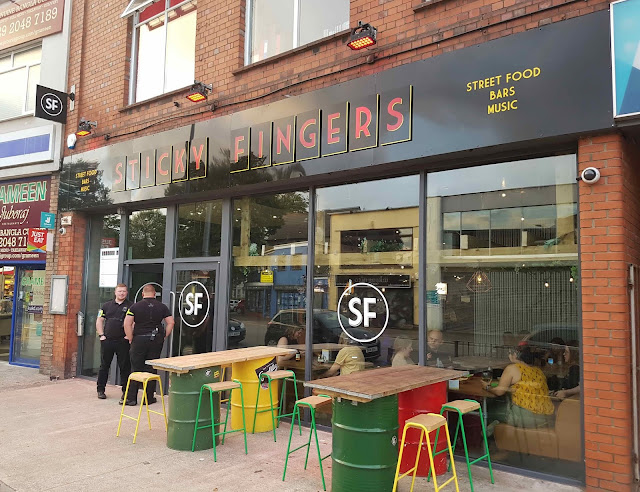 The relocation of Sticky Fingers Street Food to the old Varsity site on Richmond Road is huge news for Roath.

In one fell swoop, Roath now has the best burger in Cardiff as well as delicious tacos, pies and seafood. 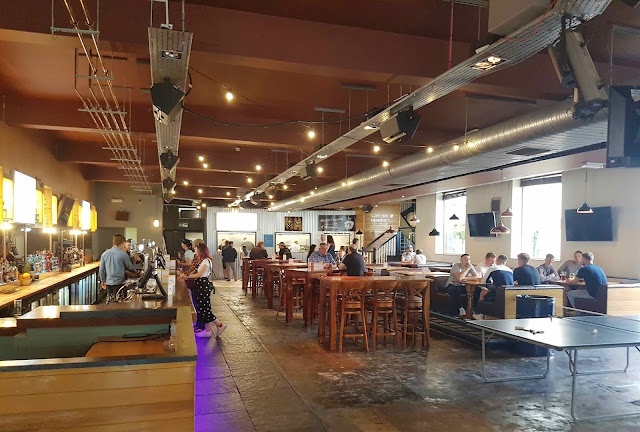 Their craft beer selection is fairly pedestrian but it’s an improvement from their previous city centre location. A Frank + Otis Time Flies hazy session IPA (£4.50) was very easy drinking, light and citrusy; a Cardiff-based company their beers are brewed by in Devon by Hanlons Brewery. 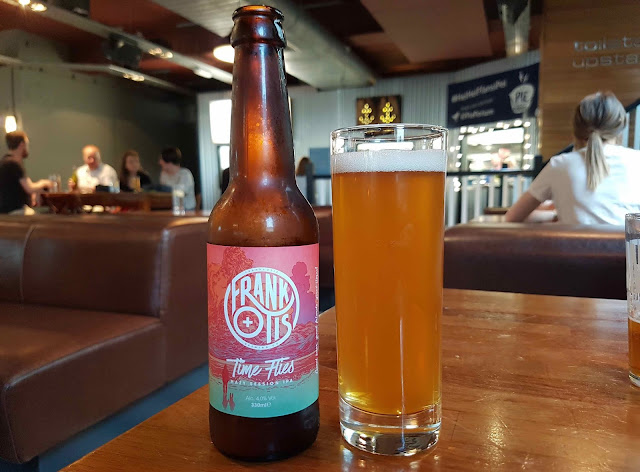 Hoof
Hoof’s burgers have raised the game with their relocation to Roath. What was already a delicious burger is now a brilliant burger. The main improvement comes from changing up their patties from preformed ones to smashed-on-demand ones, making for a far better crust, looser texture and better flavour.

Their Almighty Hoof (£9.50) combined a juicy Welsh and Longhorn beef blend patty in a light yet robust toasted Alex Gooch challah roll. On top was a terrifically filthy combination of rich and meaty chicken liver pate, savoury truffled mushroom duxelle, crisp streaky bacon, smashed hash brown, oozy cheese, tangy burger sauce, cleansing pickles, shredded lettuce and white onion. It required at least a half dozen napkins to tidy up the mess but it was more than worth it. 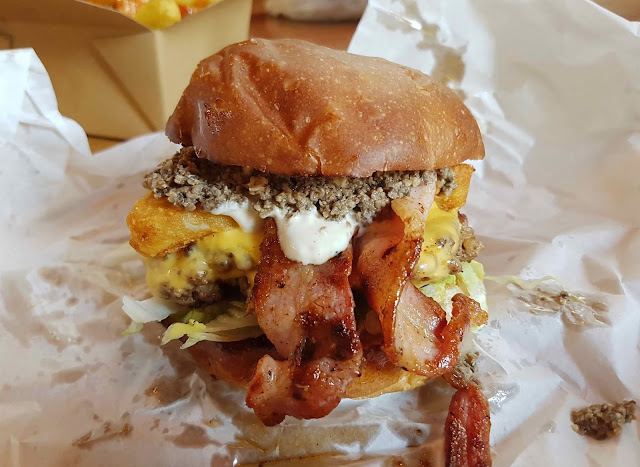 On the side, Hoof have raised their game once again with the introduction of hand cut skin on fries. Crisp, golden and tender, I ordered the 'nduja fries (£3.50) which were topped with a potently spicy and meaty sauce. 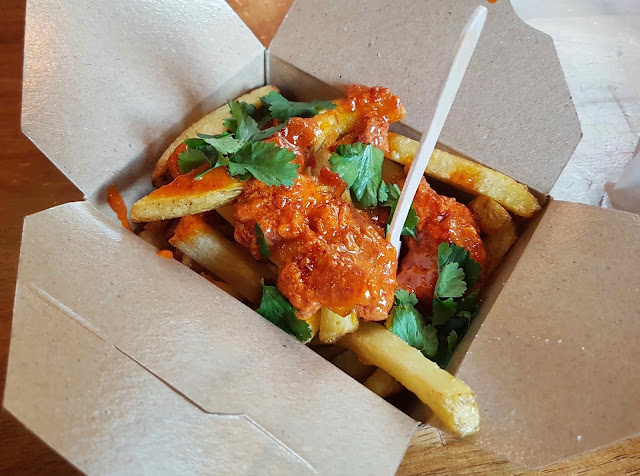 Tender cauliflower pakoras (£5) were coated in a lightly spiced batter and dressed with tangy tamarind raitha and pink pickled onions. 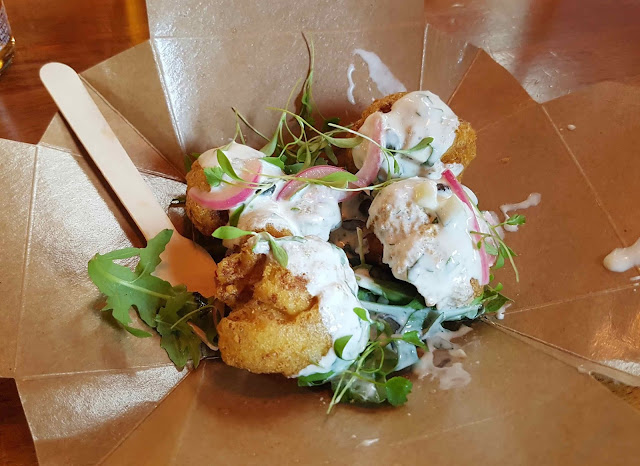 I’ve got a lot of time for Cwtchitas’ tacos. A trio of soft corn tortillas (£6) were loaded with soft shreds of complex-spiced beef barbacoa. Pickled onions, fresh coriander, a squeeze of lime and herby sour cream all added extra interest to each mouthful. 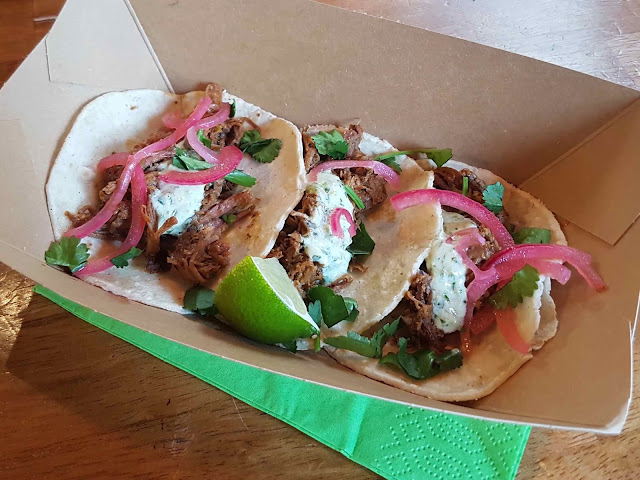 From king prawns, to sardines and flame-cooked salmon, Two Anchors (love that pun) serve an interesting range of all things fish and seafood.

We’d already eaten our fill by the time I got around to visiting their stall so we shared a bonne bouch of a sweet and tender scallop (£3.50) drenched in melted garlic butter; I might have poured the leftover golden nectar straight into my gob from the shell. 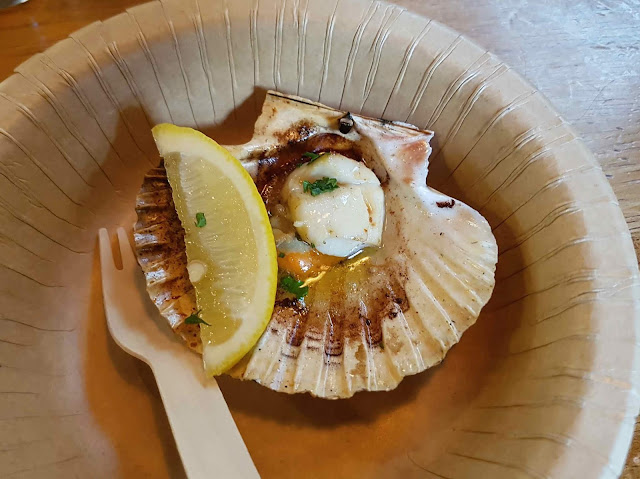 I was gutted I couldn’t make it to this year’s Bite festival, especially when I saw the cherry pie which Pieporium served. Thankfully, it’s made its way over to Roath.

In addition to their savoury pies such as coq au vin and Welsh beef & Anglesey blue cheese, this dessert is an absolute killer. A golden, crisp and buttery shortcrust pastry case was stuffed with vanilla fragranced sweet cherries without a hint of tartness. Topped with a scoop of smooth Wild Fig vanilla ice cream, it was a close second to Hoof for my favourite dish of the night. 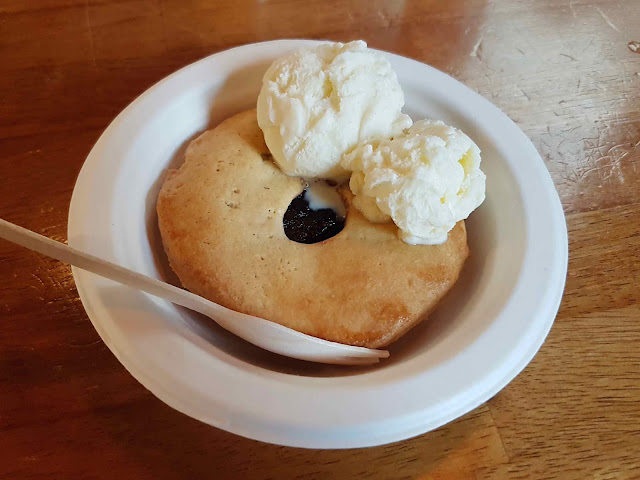 The arrival of Sticky Fingers in Roath is one of my favourite Cardiff openings in 2019. It’s ten minutes walk from my house, therefore I fear for my waistline.