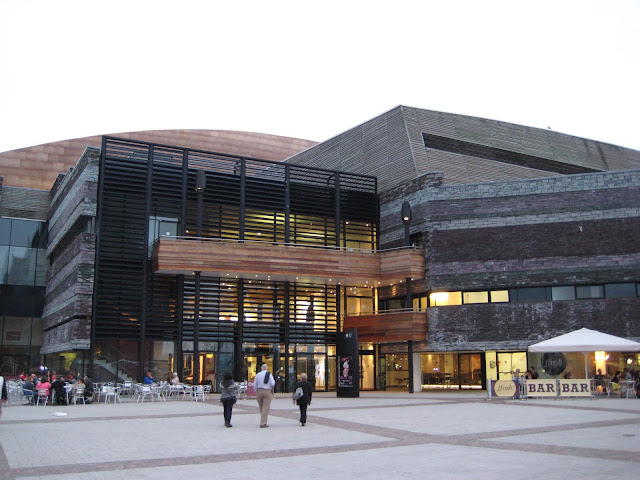 It’s 24 hours since the latest guest chef night at Ffresh in the Millennium Centre and I’m still feeling full.  For last night, the meal cooked by Bryan Webb was gargantuan; it was epic; it was a mahoosive behemoth of a feast.
Having enjoyed the previous guest chef night at the Millennium Centre immensely, Mrs G’s birthday was the perfect excuse to book tickets for this next event. Bryan Webb’s Michelin starred Tyddyn Llan is the second most highly rated restaurant in Wales according to this year’s Good Food Guide and I've been planning a pilgrimage to his Denbighshire based establishment for a good while. Bryan’s food is simple to look at on the plate but his understated presentation belies the skills of a master of classical cooking techniques. What’s more you can tell this Welshman is someone who is very proud of his heritage. A number of the dishes we ate during the evening were traditional classics which had been elevated to the levels of haute gastronomy.
Having caught a glimpse of the menu a few weeks ago, I’ve been salivating like one of Pavlov’s dogs ever since. The evening had the same format as the Bryn William’s evening. £45 buys you one of the best value Michelin starred standard meals in the UK. Canapes, 4 courses, coffee & petit fours and not forgetting 5 glasses of quality wine supplied by Cardiff based Viader Vinters were all included in the price. It is insanely good value.
We took our seats in the bar area of Ffresh and quaffed a few glasses of the rather fantastic Bryn Ceiliog 2010 from the famous Vineyards of Leckwith in the Vale of Glamorgan! The light and clean floral notes were just as refreshing a bottle of ice cold Evian.
Shortly after plonking ourselves in a cosy booth we were met with a procession of canapés that kept on coming.... and coming. 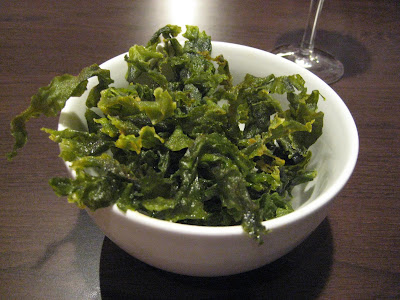 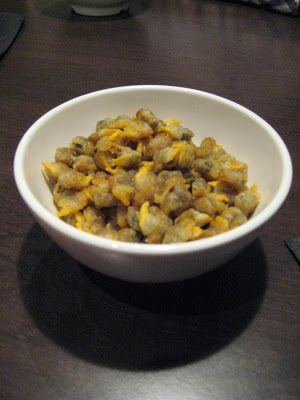 A bowl of crispy laverbread was reminiscent of Chinese crispy seaweed from the local takeaway but had a more intense flavour of the sea. I demolished a bowl almost singlehandedly and each time it was magically replenished. A bowl of cockle popcorn was as moreish as its inspiration. Pleasantly crisp and with a mild shellfish taste it was however a little bland...a bit like popcorn really.
This would have been your lot of canapés in most places, but we hadn’t even got started. Shortly afterwards we were presented with a platter of jaw-droppingly good delights. These included a perfectly stringy & oozy Glamorgan sausage, an intensely woody smoked salmon roulade and most importantly a superbly good warm scotch quail egg. I could easily have eaten 10 of these and died a happy man. In fact I really need some more fresh scotch eggs in my life and fully intend to make this Guardian recipe. 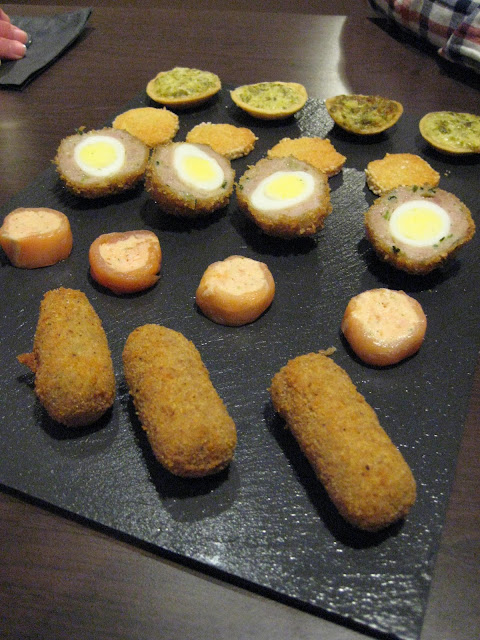 Taking our seats in the dining room we nibbled on a rather good bread selection. Hazelnut and date bread and tomato bread were the highlights. 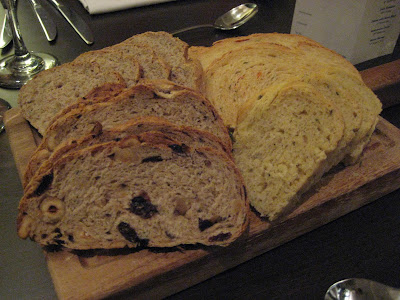 Starter – Vinaigrette of butter beans and Madgett’s Farm duck confit with anchoiade croutons – Well flavoured duck meat, silkily soft beans, crisp croutons with a delicious garlicky anchovy topping and a generous dousing of dressing all worked together in harmony. If I was being critical I would say the dressing was a little oily. However, as the olive oil was such good quality I didn’t mind having to mop it up with a couple of slices of bread. The starter was washed down with a lovely glass of the summer berry-like Bergerac Rose 2010. 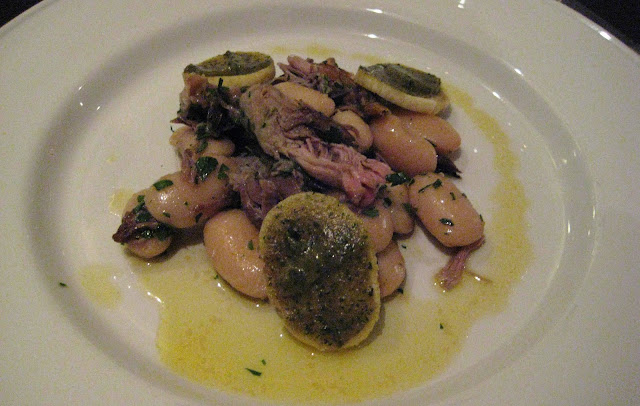 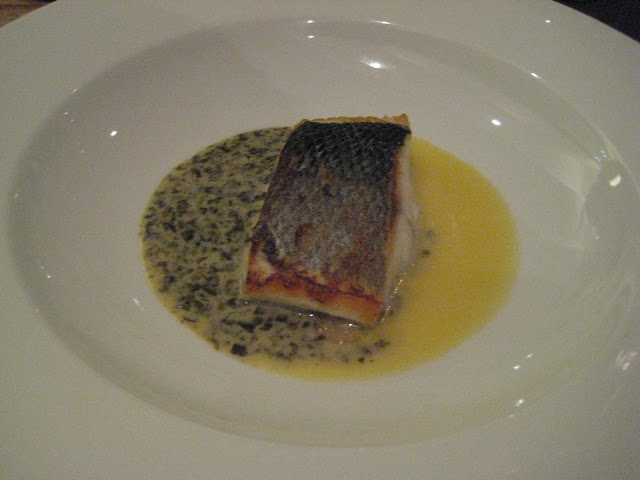 At this stage in the game I was beginning to get a little full so I began to think tactically. I reigned in my wine consumption in order to maximise available space in my stomach for solid foodstuffs.
Fillet of Welsh black beef with shallot and thyme puree - Sourced from an estate near Tyddyn Llan this was a top drawer piece of meat; melt in the mouth, well flavoured and cooked to perfection. Steak heaven. The accompanying fondant potato, wilted spinach and meat jus complemented the meat perfectly but I felt that the sweetness of the shallot and thyme puree was a little much. In addition, someone had been a bit trigger happy with the black pepper on Mrs G’s steak. I had to help her out by eating half of it for her. The things you do for love... 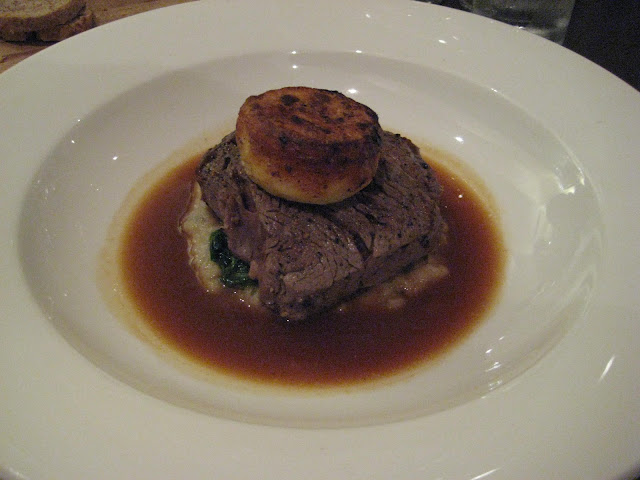 Blueberry crème brulee and sorbet – Just lush. Crisp caramel and a perfectly set cream flecked with little blue jewels of juice. The blueberry sorbet was just the kind of palette refresher needed after all the rich food I'd consumed. 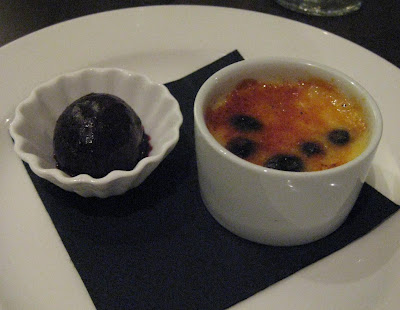 Fit to bursting I was ready to give up but there was still time for a final curtain call. Somehow I managed to wash down some pretty ace petit fours with a cup of coffee. A little almond sponge dipped in chocolate was a delight whilst chocolate truffles were soft as a pillow & just as rich. 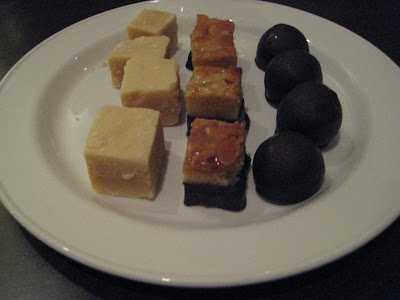 We had a wonderful evening in the capable hands of Bryan Webb and the incredibly friendly serving staff at Ffresh. In fact I’d probably go so far as to say this is the best meal I've ever eaten in Cardiff.  I can’t wait for the delights in store at the next guest night. Fortunately I only have to wait a couple of days as Monday sees the legendary Shaun Hill of the Walnut Tree cooking up a special feast for Ffresh’s 2nd birthday party. I’m not sure whether there are any tickets left but it would probably be worth contacting Ffresh if you’re interested.
Ffresh restaurant, Wales Millennium Centre, Bute Pl, Cardiff CF10 5AL Tel: 029 2063 6465, Web:http://www.wmc.org.uk
Posted by gourmetgorro at 19:26