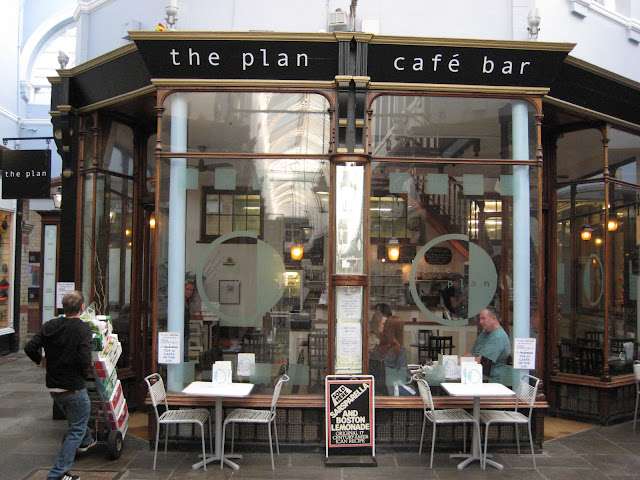 I know next to diddly squat about coffee. I have a mug of PG tips for breakfast and if I’m in Starbucks then 9 times out of 10 I’ll just order a cuppa char as well. There are so many things that can go wrong with coffee that I just can’t be bothered. Either I’m repulsed by the bitter taste when the beans have been burnt. Failing that, the overwhelming strength of many cups make me gag on each mouthful like a shot of neat vodka. Or at the other extreme an overly milky latte doesn’t seem any more appealing than drinking half a litre of hot whole milk. Refreshing.
On Saturday morning Mrs G and I needed a caffeine boost and a light bite to eat before engorging ourselves at The Great British Cheese Festival. 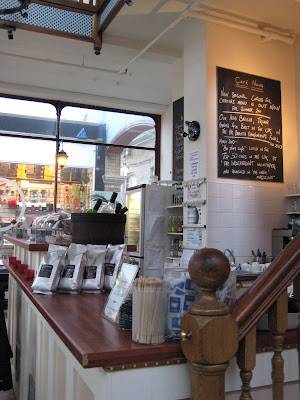 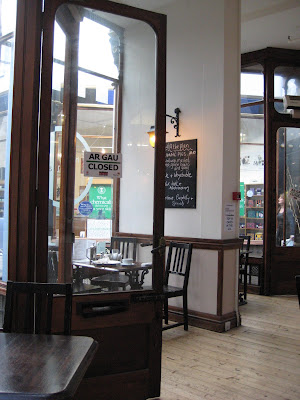 I’ve heard a number of good things about The Plan in the Morgan arcade. It’s been featured in The Independent 50 Best coffee shops in the UK; the head Barista was ranked 4th best in the UK Barista Championships and finally they’re Cardiff's only members of the third wave coffee movement.  All pretty strong accolades, especially if knew what third wave meant!
Apparently....
The 1st wave of coffee was when the consumption of instant coffee became very common.
The 2nd wave was when people began to enjoy speciality coffees such as lattes and cappuccinos.
The 3rd wave is all about viewing coffee as an an artisanal foodstuff (like wine) rather than as a commodity (like sugar).  This involves thinking more closely about varieties of beans, their growing region and their individual differences in flavour.


It all sounds a little poncey doesn’t it? However if this is the focus on detail required to produce a cup of coffee as good as The Plan’s then it’s most certainly worth it. For this the best cup of coffee I have ever had in Cardiff. 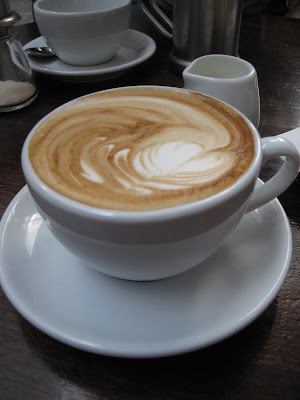 I opted for a large cafe latte (£2.50) which had a light smooth flavour, not a hint of bitterness, and just the right balance between coffee and milk. The swirl on the top of the froth looked pretty artistic too.
Mrs G’s cafetiere of Ethiopian Blend (£2.90) was even better. The tasting notes described this blend as “all about the sweetness and fruit” and it did exactly as it said on the tin. The coffee had a lovely natural sweetness to it and if I was being Oz Clarke-esque I’d definitely say I could pick out a hint of apricot. It was excellent.
To go with our liquid refreshment I had a decent tea cake (£1.40) whilst Mrs G opted for a highly competent plate of buttery scrambled eggs and toast (£4.70).
Next time I’m looking for a cup of coffee in Cardiff, I definitely plan on going to The Plan- sorry that was too tempting.
The details: The Plan, 28-29 Morgan Arcade, Cardiff, CF10 1AF, Telephone - 029 2039 8764
Posted by gourmetgorro at 17:52