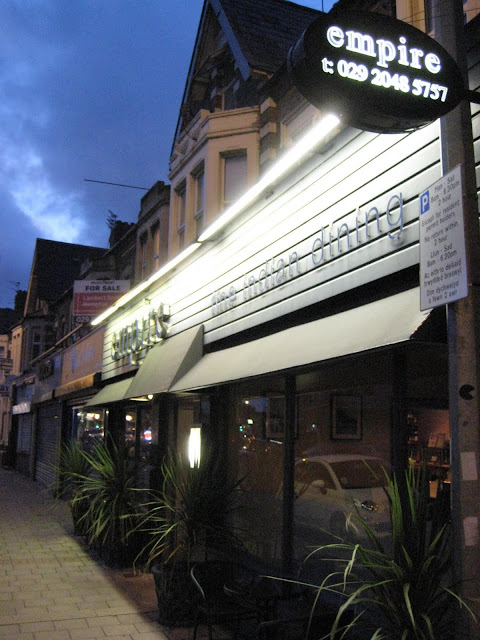 Sometimes I question the point in reviewing generic high street curry houses. I mean they’re all much of a muchness aren’t they? Everyone has their own dish they order time and time again; most people are unlikely to deviate from their usual curry house due to proximity either to their home or local pub; a good proportion of the clientele have had a few pints and so their palette is perhaps less critical than it otherwise would be and lastly, there really isn’t much between the food served at one high street curry house and the next is there?
It’s with this last point that I disagree with the most. Whereas it would take me 4 pints to happily eat at New Himalaya on Wellfield Road, I’d contentedly eat at Empire with no alcoholic stomach lining. You see even  though the menu at Empire reads the same as every other high street curry house (I think their goal to bring Michelin starred Indian food to Cardiff is a little misguided), a curry at Empire is relatively speaking a fresh, ghee-lite experience.
My starter of onion bhaji was nice and crisp but I would have liked a little less batter and bit more onion. Meanwhile Mrs G’s lamb samosas were crisp and packed to the corners with spiced meat. 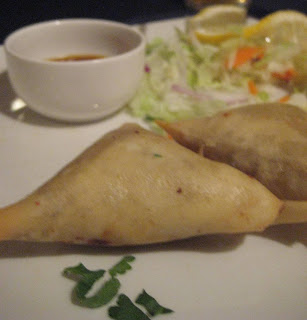 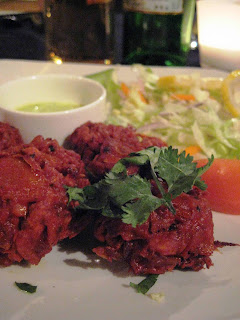 The mains brought the most interest to the evening.  My staple double meat curry entitled Chicken Gurka Masala was a well balanced mix of chicken tikka, yoghurt, ginger, coriander, minced lamb and spices. Meanwhile Mrs G’s Haryali Murgh Massala was a swamp green concoction of grilled chicken marinated with spinach, mint and coriander served in a creamy sauce. Even though the colour of the sauce was rather curious, the combination of the spinach with the different herbs was absolutely fabulous. Disappointingly the chicken was towards the dry end of the moisture spectrum.  The final standout dish of the evening was a saag paneer which combined moist creamy cubes of paneer cheese served with fresh, well spiced spinach. It goes without saying that the naans and rice dishes were good.
So all in all a highly enjoyable curry.  Empire’s dining room has a slightly more contemporary feel than the other curry houses in close vicinity. However, as a result of their popularity on a Friday & Saturday night, their efficiency of service can suffer.  This time we had no problems with waiting as we’d made the reckless move of sitting down to eat at 10:30pm. The downside of this was I was still busily digesting curry at 2am, slightly scuppering our early Saturday start for our trip to West Wales.
The details:
Empire, 157-159 Albany Road, Roath, Cardiff, CF24 3NT
Telephone: 029 2048 5757
Posted by gourmetgorro at 18:14