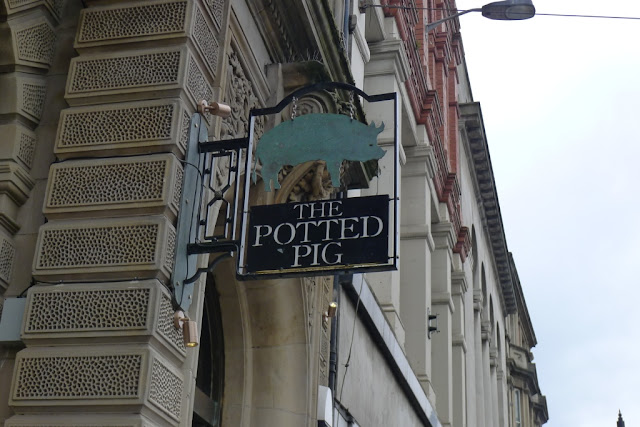 Jay Rayner recently described the Potted Pig as a gift to the city. He’s right. There’s so much to like about the Potted Pig including its pared back dishes which focus on ingredients and not on frippery; its charming setting in a former bank vault which creates an atmosphere unlike any other in Cardiff; their selection of over 20 gins at the bar which allow for impromptu tasting sessions and their knowledgeable and friendly team of staff who give the impression that the Potted Pig is a place which is serious about food.

The only slight problem is that the Potted Pig isn’t as good as umpteen London gastro-pubs (think Anchor & Hope, Bull& Last and The Gun) which serve up similar food. In spite of this, our very good but flawed meal stands head and shoulders above most other local restaurants’ offerings. 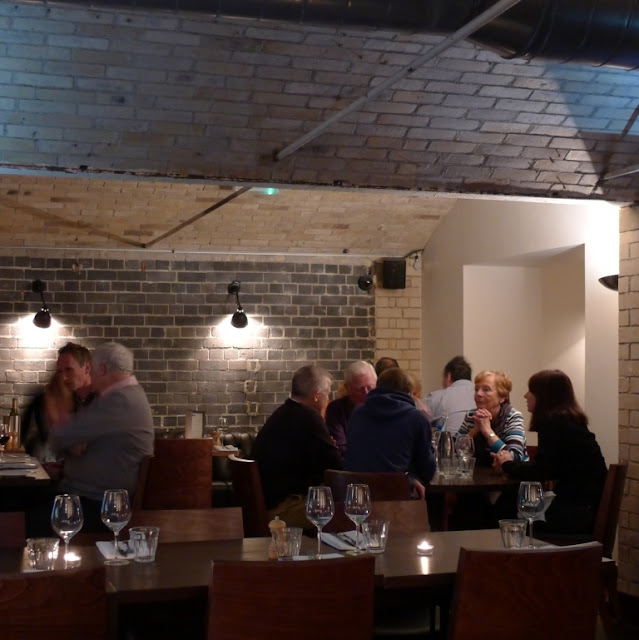 Having been ushered downstairs into the vault by a greeter on the door (I guess it saves people without bookings a trip down a flight of stairs), we were shown immediately to our table. Fortunately for my camerawork we were seated at one of the few tables which wasn’t enveloped by an atmospheric gloom. We started with gin & tonics from their bounteous collection. I had a Hoxton gin infused with coconut and grapefruit. I loved it but my brother, Gourmet Gilly, felt it was too reminiscent of Malibu. Mrs G had a rather good sloe gin whilst Gilly had an Old Raj gin infused with saffron. 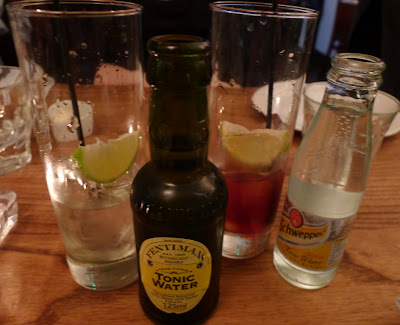 Starters were a success across the board. These included a buttery, slightly aromatic and tender shredded potted pig with toast and pickles (£6), a crustacean equivalent in the form of potted shrimp (£6) and a well constructed dish of smoked trout with poached egg, béarnaise sauce and potato blini (£5). 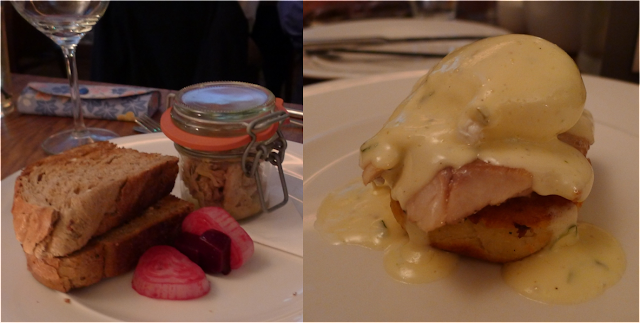 Mrs G’s starter was the standout of the bunch. Her duck hash (£6) was an unctuous, crispy, meaty melange of shredded duck, potato, herbs and a runny egg yolk. It was a scrumptious piece of comfort food. 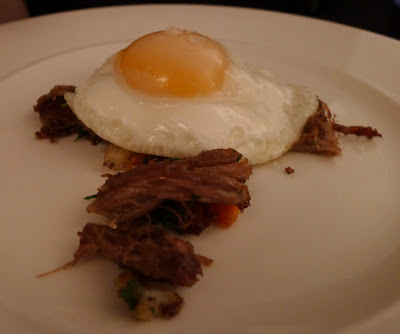 As someone who is impartial to the odd pun I couldn’t resist the Offaly good breakfast (£6) with Mark’s homemade ketchup. It was good but there was nothing to elevate it beyond being a very good cooked breakfast. In fact it tasted a little out of place as a starter on a dinner menu. In spite of this, all the elements were on the nail including medium cooked pieces of liver and kidney along with some quality bacon, black pudding and runny egg. Unusually for homemade ketchups, Mark’s version was pretty good with a decent amount of spicing and vinegar. 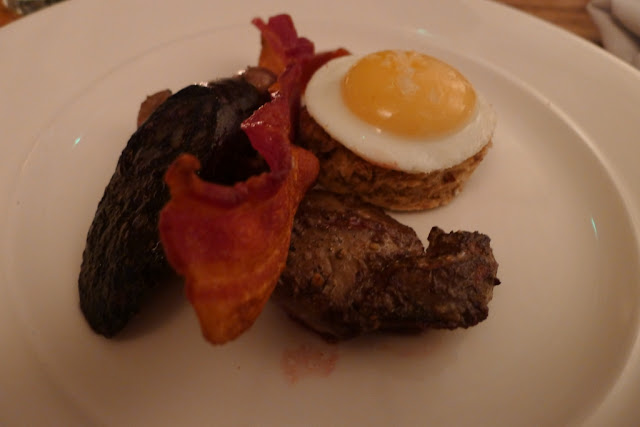 Onto the mains and these too were largely on the money. Unfortunately, this too was where the flaws in the meal lay in wait.

Two steaks were ordered by members of the group but sadly Fat Dad’s medium-rare 8oz Rib eye steak (£15) was served cold. It was promptly sent back and returned swiftly at an appropriate temperature. In the end both steak eaters were happy with their offerings with one opting for béarnaise and the other for green sauce to go with their slabs of meat. More on the accompanying amazing chips in a minute. 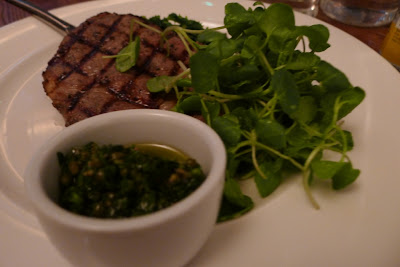 Gilly and my mother both ordered the whole bream with Jerusalem artichokes, purple sprouting broccoli and béarnaise sauce (£14). Both loved their fine fishes and Gilly went so far as to repulse the whole table by eating everything down to the eyes. 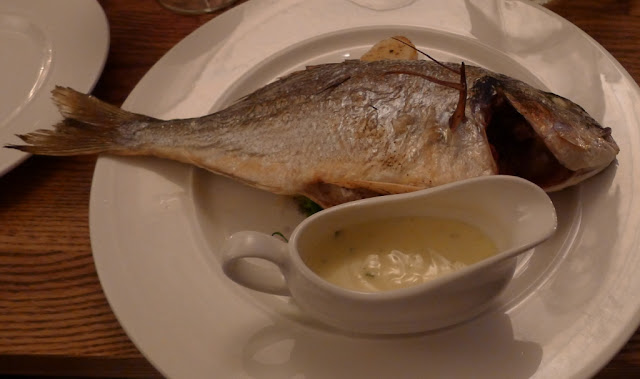 Mrs G’s slow roast Hereford pork belly with baked carrots and greens (£14) was another piece of top drawer cooking. Moist flesh was capped with magically crisp yet yielding crackling. I was a big fan of the accompanying cider sauce but Mrs G felt it lacked depth of flavour. 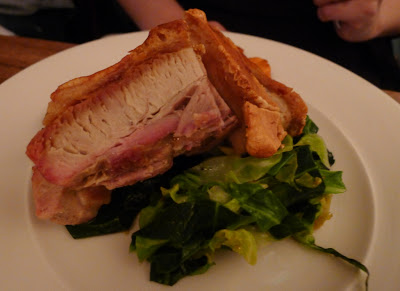 My main dish had leapt out at me from the menu on numerous online viewings. I was warned by the waiter that my whole Devonshire brown crab, served cold with mayonnaise & chips (£18) was a lot of effort and mess but that it would be worth it. Armed with crackers and a crab fork I was ready for battle when Mr Crab (I inspected his skirt to verify his gender) was plonked down clutching his garnishes. With all the nasties removed, I was informed that any meat I could get my hands on was edible. Under the bonnet lay the easy to extract rich, sweet brown meat. It was the white meat which posed the bigger challenge. Mr Crab wasn’t going to give it up without a serious fight. After half an hour’s scrapping I was beaten. The crab meat was perfectly cooked and absolutely delicious but I’m not sure I’d agree that it was worth the effort. Next time I’ll just stick with dressed crab. 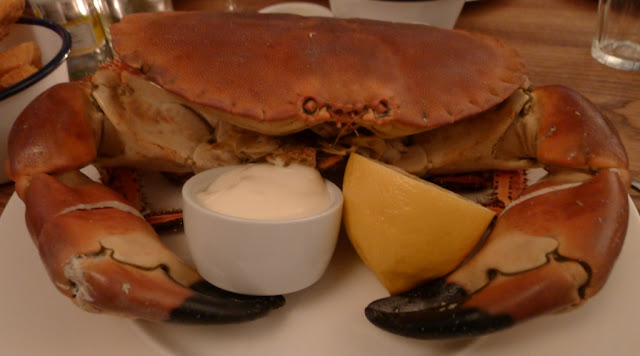 Both my dish and the steaks were served with some of the finest chips I have ever eaten. These Heston-esque triple cooked bad boys were supremely crisp on the outside with perfectly fluffy interiors. 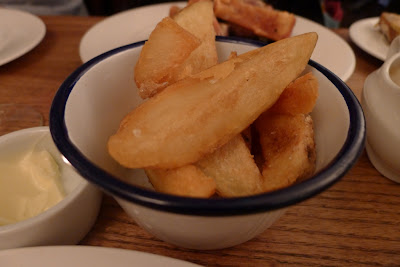 The less that can be said about the other side dish the better. Truffled Welsh Rarebit (£5) was one of the most offensive things to have passed any of our lips in quite a while. Whoever decided that Welsh rarebit is short on flavour and so would benefit from the addition of a cart load of horseradish, mustard and truffle oil is misguided. Perhaps one of these ingredients would have worked but the vicious concoction only served to produce an umami laden dirty bomb. 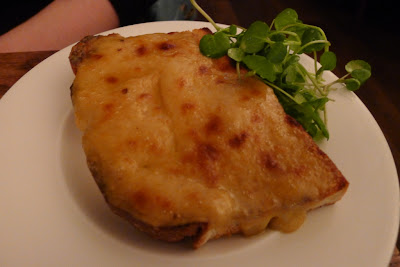 Things picked up again with the desserts.

Mrs G’s lemon posset with lemon and thyme curd was absolutely brilliant. A creamy, light, citrusy posset was topped with a generous dollop of sharp and aromatic curd and some crumbly biscuit bits. Gilly’s chocolate mousse with brandy cream (£5) was enjoyably rich and boozy but the accompanying shortbread wasn’t short enough and would have benefited from another brick or two of butter. 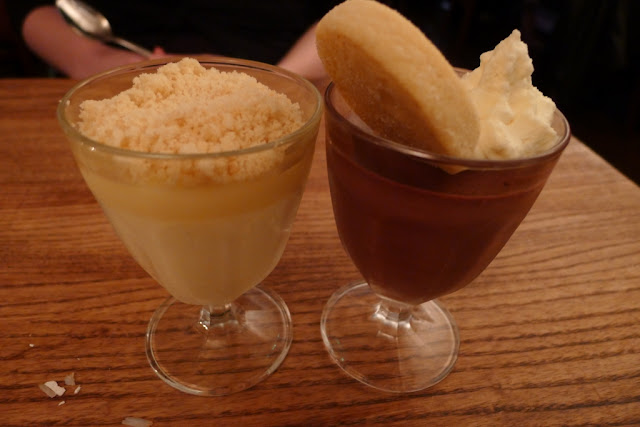 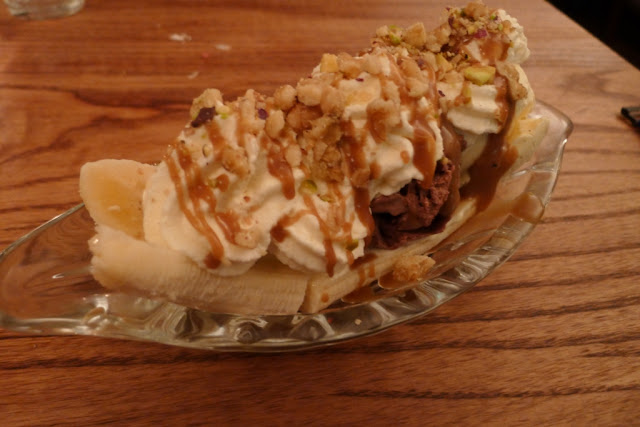 There’s some pretty awesome cooking going on at Potted Pig and it’s certainly helping to drag Cardiff’s dining out scene into the 21st Century. It’s just a shame the few bum notes left a little bit of a sour taste in our mouths. In fact maybe that’s just the taste of the Welsh rarebit which I can’t get rid of.