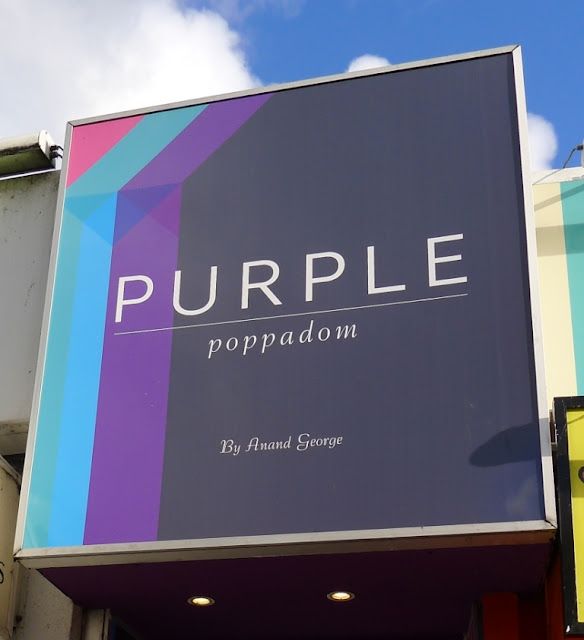 It’s not to be mistaken with the infamous chess-playing, hulking black box of a supercomputer which shares the same name.

Nor is it to be confused with Deep Blue Sea, the shockingly bad Science fiction horror film featuring Samuel L Jackson, LL Cool J and a horde of genetically modified killer sharks.

Deep Blue is Anand George’s new summer menu at Purple Poppadom. And, unlike the two other Deep Blues mentioned above, it’s a thing of absolute beauty. 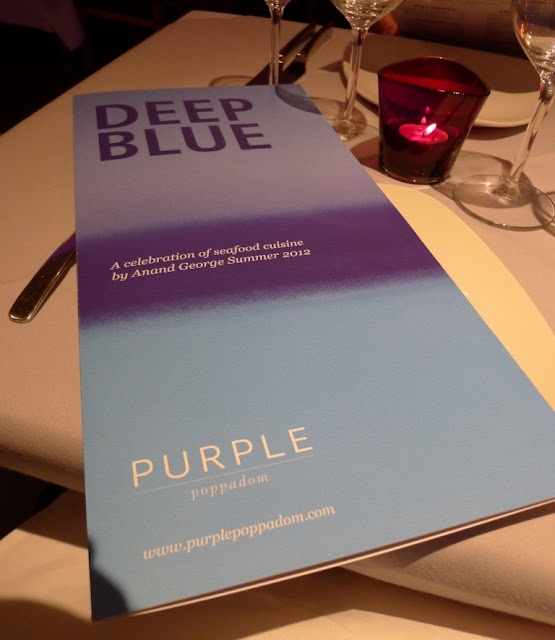 With an emphasis on lighter flavours and fish to complement the summer weather, this shift in focus with the change of the season is a serious statement of intent from a restaurant which is a whole lot more than a curry house. It’s just a shame that with the recent awful weather, a more appropriate name for the menu would be Purple Rain. 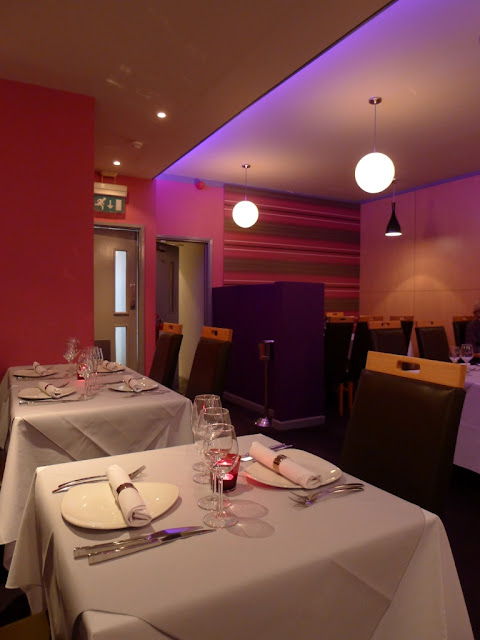 We chose the tasting menu (£39.95 per person without beer and £47.95 with beer) comprising of 5 courses and a number of extras. The amount of food was belt-looseningly generous but not trouser-splittingly so. Having opted for the matched beer option, each savoury course was accompanied by a large wine glass of beer. Notable were the damn fine Brooklyn lager and Wales’s own Cwrw Celt. It’s hard to say whether each beer specifically complimented its accompanying dish but each one tasted rather delicious.

We began with some excellent poppadoms and chutneys. The date chutney had me licking the bowl clean and the lemon chutney was a mouth-puckering alternative to the ubiquitous lime chutney. 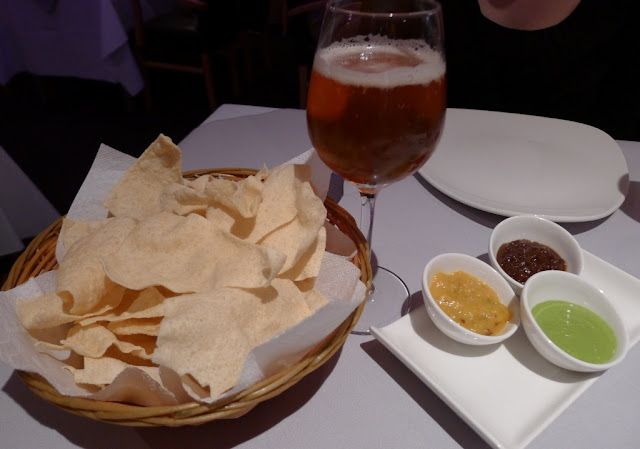 The first course was the most delicately spiced of the evening. Perhaps our taste buds were being broken in gently. Tandoori salmon was marinated in a mixture of honey and mustard, imparting it with a gentle sweet and spiciness. A pattice of tuna coated in crisp breadcrumbs was comforting yet subtle. The richness of these two components was balanced well by the clarity and fragrance of mango pieces in a passion fruit and chilli dressing.  I’d have liked a little more chilli in the dressing but that’s a matter of preference.

The second course was an absolute stunner. Tandoori grilled swordfish loin was marinated in an intensely aromatic combination of coriander and mint. This was my kind of fish dish – the sort that makes you think you’re eating steak. It was served with a wonderful South Indian style risotto with a sticky rice like texture. The risotto was flavoured with the sweet crunch of red onion and diced coriander. A drizzle of chilli oil around the plate added some heat to the dish. 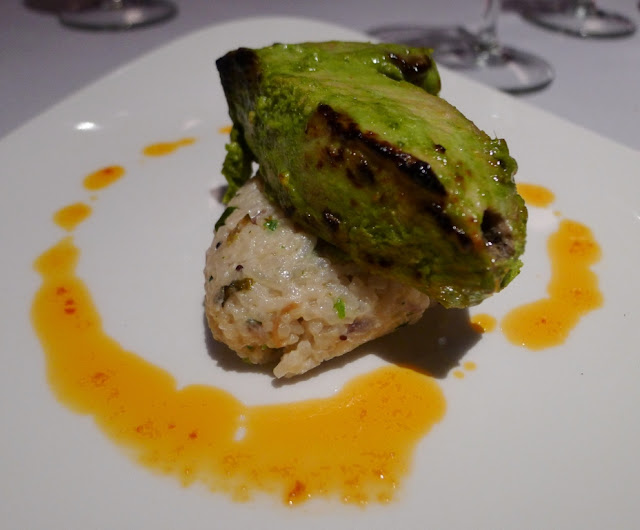 An intermission of smooth mint and chilli sorbet followed next. This was certainly the contender for spiciest dish of the evening. The deceptive and surprising combination of cool temperature and chilli heat was a very clever piece of cooking. Mrs G however, was initially left wondering whether she’d dislodged a piece of chilli from between her teeth. 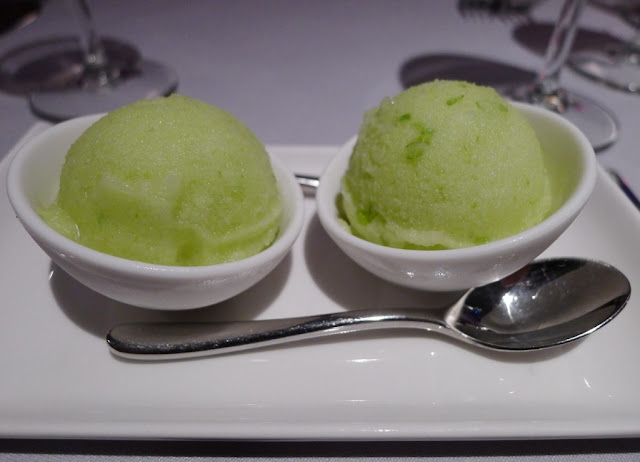 Back to curry and next we moved onto pan fried Kerala style sardine fillets on a mustard dressed salad. It was accompanied by Golden crispy battered squid and a smear of bell pepper sauce. Everything was executed remarkably well – the sardines were moist, meaty and packed with flavour whilst the Golden crispy squid was unsurprisingly golden and crispy.

The second interval brought us a sharp and smooth lemon sorbet. After the first rounds of curry, it jolted my palette back to life. 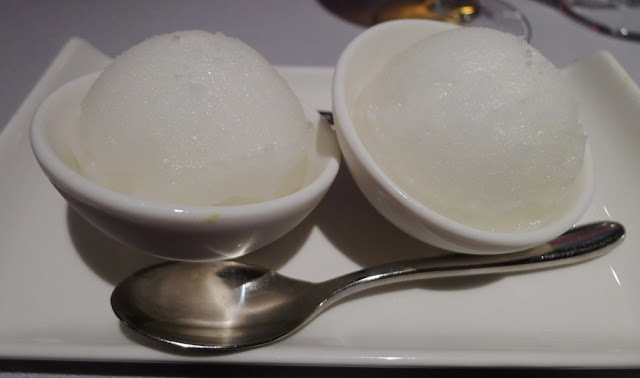 The next course was probably my favourite of the evening. And that’s not just because the portion size was the biggest. Halibut pieces were bathed in an intense Boatman sauce of chilli, curry leaves and smoked tamarind. Side dishes comprised of a mix of al dente, light vegetables flecked through with cashew nuts and coconut alongside a bowl of butter glazed rice which I could have happily devoured on its own. 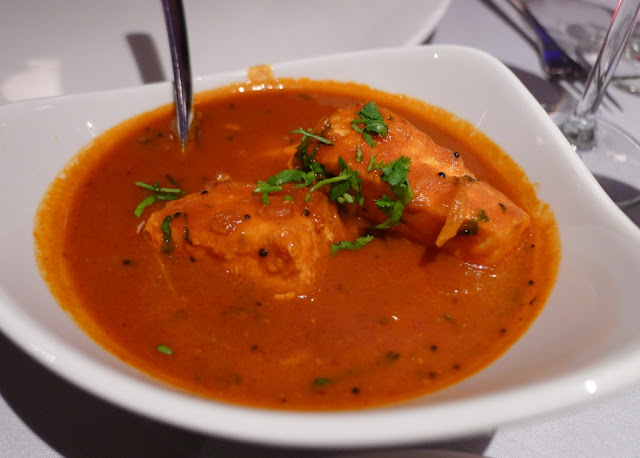 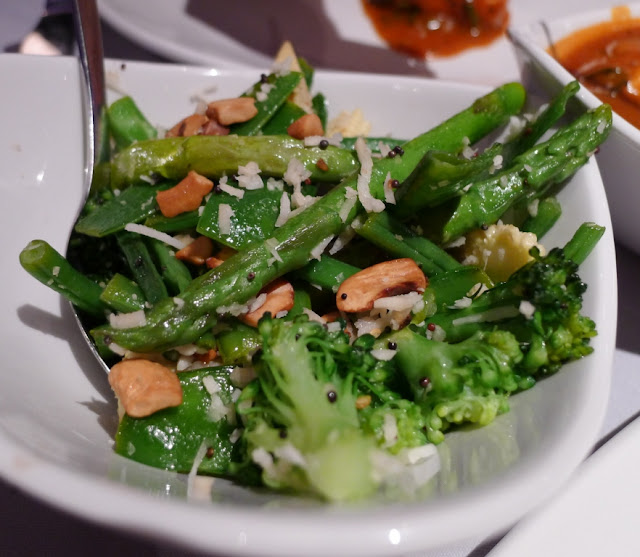 Desserts were of an equally high standard. It’s often the case that desserts are less than an afterthought on the menus of Indian restaurants. Bought-in coconut ice creams served in their shells and rock solid chocolate bombes are an all too familiar sight. Purple Poppadom take dessert as seriously as they take their curry. Mango crème brulee was smooth, fragrant and creamy with a thin, crisp sugar top. A mini samosa filled with oozing melted chocolate was a killer chocolate hit. Both of these indulgent desserts were balanced well by a piece of complex yet refreshing tandoori pineapple.

Our meal at Purple Poppadom was quite simply excellent. With fine dining credentials surpassing almost every other restaurant in Cardiff and having recently been pronounced Welsh Curry House of the Year 2012, it’s only a matter of time before Purple Poppadom have more and more awards thrown at them . The spicing of their food is refined, their dishes are delicately plated and the service is jovial and slick. Judging by the fact the restaurant was packed out on the Wednesday evening we visited, a lot of other people in Cardiff seem to agree.