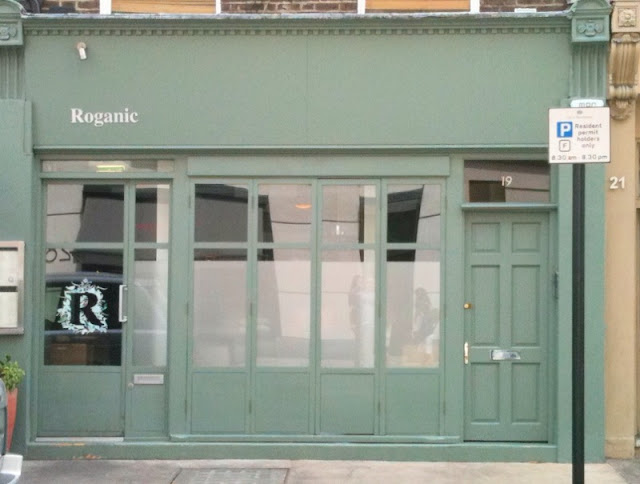 Odette Toilette is the queen of all things olfactory. Since founding Scratch+Sniff in 2010, she’s been curating regular events which help to people to explore their sense of smell. Odette’s website can be found at www.scratchandsniffevents.com, her twitter account is @odettetoilette and she co-hosts the popular podcast "Life in Scents".

As a pair highly interested in dining (and attested for by our love of the TV show Man v. Food) it is a tradition of D and I to go out for a meal on our anniversary.  Fanciness has varied. We started year one with Midsummer House in Cambridge, then a few summers ago found ourselves in a Bruges sausage house. That D is vegetarian requires careful planning. He’s very much at the bon vivant end of the scale, delighting in eggs, cream, butter and hating anything resembling vegan.

This year we decided to make the most of Simon Rogan’s two year ‘pop-up’ in London -  Roganic. The restaurant offers no-choice set menus of 3 (£29), 6 (£55) or 8 (£80) courses, all of which come with a vegetarian equivalent. Sadly, unlike Man v. Food, there were no prizes on offer for consuming ten tasting menus in succession, not even a Roganic t-shirt. However, this was more than compensated for by the excellent service, which felt more like chatting to interesting people at a party than being talked to in a starchy, overly formal way. This risks backfiring massively, but all the team were charming, intelligent and clearly loved food.

An unassuming exterior and frosted windows gave little away of what would be inside Roganic. We’d have thought it was an old school caff, if it hadn’t been for the bourgeois pistachio coloured paint and genteel Marylebone location, pointing to the serious food experience within.

Inside was high-class IKEA.  The small tables and straight-backed chairs were more suggestive of a quick meal than a three hour dining experience, but tasteful midcentury furniture ensured there was no risk of being served meatballs with cloudberry juice.

Choosing the 6 course option, we kicked off with breads (including a great ale roll) accompanied by an artful smear of homemade butter on a slab. The carb-loading begin, as insurance should the subsequent tasting portions be minute.

The amuses brought Rosemary and Chickpea Wafers with lobster and apple jelly served on a cross-section of a log. D had beetroot wafer with goat’s cheese while I was brought a wooden box of hay, with a croquette of smoked pork and eel nestling inside. The croquette was an unami hit. We could have quadrupled the quantities of all the snacks, and taken the lot on a picnic. 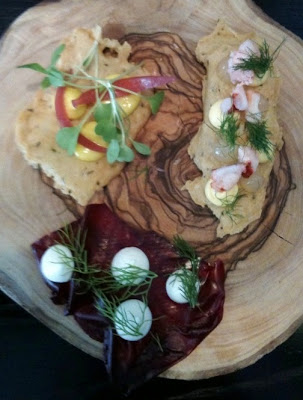 Next up, a dish which came to the table looking like baby food: a puree of carrots with ham fat, pickled celery and bacon. Dredging the bowl with my spoon brought up the carrot, marbled with creamy melted lard. The crispy treats added crunch and a nice mix of the refreshing and the salty. The vegetarian version went without the pig and was creamy but with fewer surprises.

Course number two was our favourite. Mushrooms in stock with water mint and buffalo curd came in a dish that looked like a giant nacho. Both of us had this; it was deliciously meaty yet astonishingly vegetarian. The curd had a bouncy texture that held in the warm stock, and which gave a creamy twist to the mushrooms. The water mint offered anise-y, peppery flavour that we’d not before encountered. 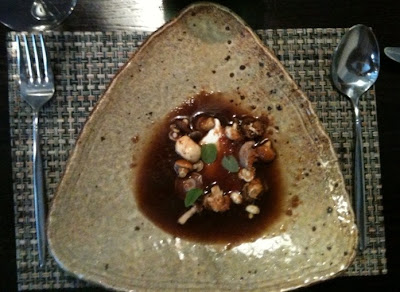 Next up for me was Scallop with Apple and Oyster which was like gargling with rockpool water - very ozonic and refreshing. D had Beetroot dumplings with mace which were little bland cushions which didn’t quite match the heights of the previous course.

D then had asparagus three ways (roast, julienned and in a puree) with egg yolks, an interesting mix of freshness and richness and a departure from the asparagus with boiled egg theme. The garnish, resembling over-roasted broccoli florets was dry, and added little.  I had sole with marrowbone stock and roast tomato. With a globule of marrow perched on top and a toothsome, the simplicity of the fish was wonderfully framed with savoury, rib-sticking goodness. I could have eaten this many times over. 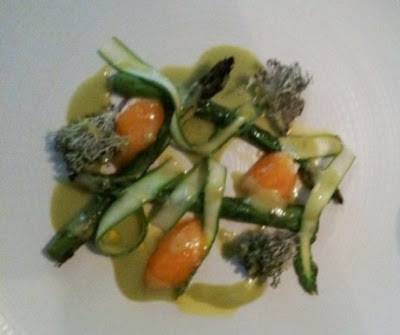 In our final savoury course, Mr D had cauliflower with strawberry glaze and pureed turnips which to him summed up the meal: an interesting combination of some lovely ingredients, but which didn’t quite come together. The strawberry glaze brought an unwelcome sweetness to what was otherwise a well-composed main. 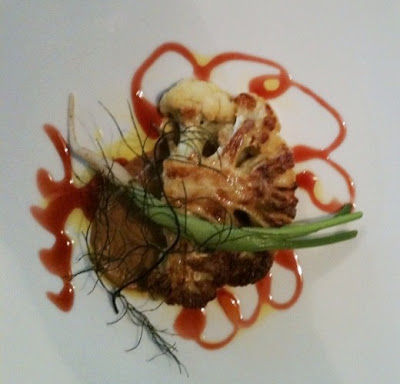 I had roast duck with with duck sweetbreads and turnip. The little sweetbreads had been deep-fried into crispness, so as to resemble coral, and texturally sat very nicely agains the marshmallowey texture of the duck. 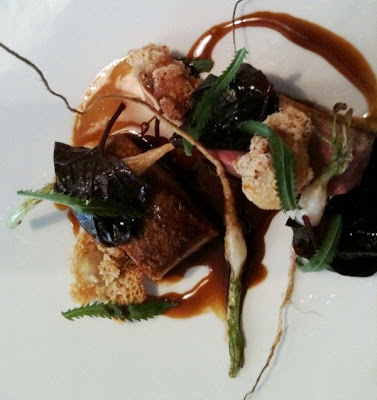 We finished with a Strawberry with Meringue Curd washed down with Douglas Fir Milkshake. Not a flavour we expect to find in a McFlurry any time soon, but delightful; a subtle forest taste in which the resiny flavour worked really well with the creamy backdrop. The strawberries weren’t that memorable. It’s all about the forest. 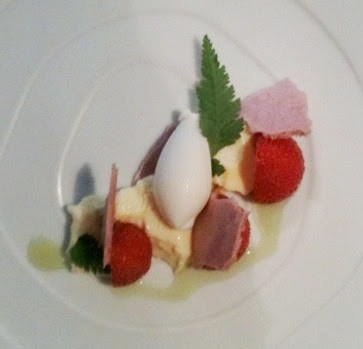 To end we had coffees accompanied by doughnuts with cherry jam, just for that extra hit of sugar. The cherry jam had a sharp kick but the doughnuts were a tad dry.

Final words: I found the Roganic experience to be nicely balanced. A food adventure but without the fuss and pomp, and a discovery into a number of wild and foraged ingredients not usually found on restaurant menus. D was less impressed, perhaps because the holy grail of vegetarian Fine Dining seemed to lie just beyond Roganic’s grasp. If all dishes had reached the heights of the mushroom and buffalo curd, he’d have been a very very happy man. But, for me, it was all about the bone marrow really, and as yet, that’s not available as a vegetarian option.