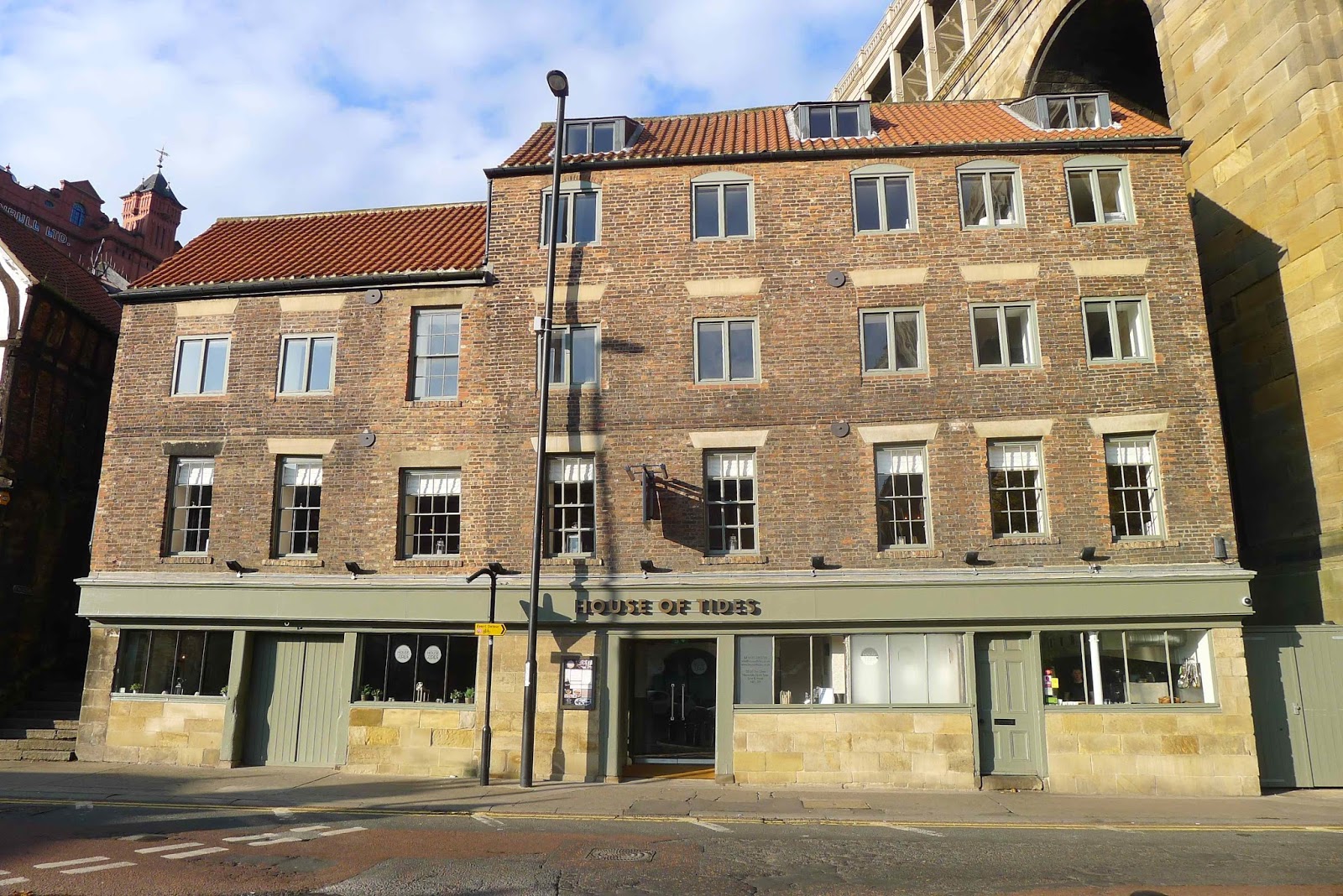 No, I’m not talking about myself – although I need to visit my hometown of Newcastle more often than my fleeting annual appearance.

I’m in fact referring to Kenny Atkinson, the affable chef who’s had two dishes on the banquet at the Great British menu and held Michelin stars whilst cooking in the Isles of Scilly and County Durham.

Having finally returned to the Toon after cooking his way around the country, Kenny opened House of Tides in February 2014. Situated in an imposing 16th Century former merchant’s house on the banks of the Tyne, it’s a fitting location for a Geordie destination restaurant. 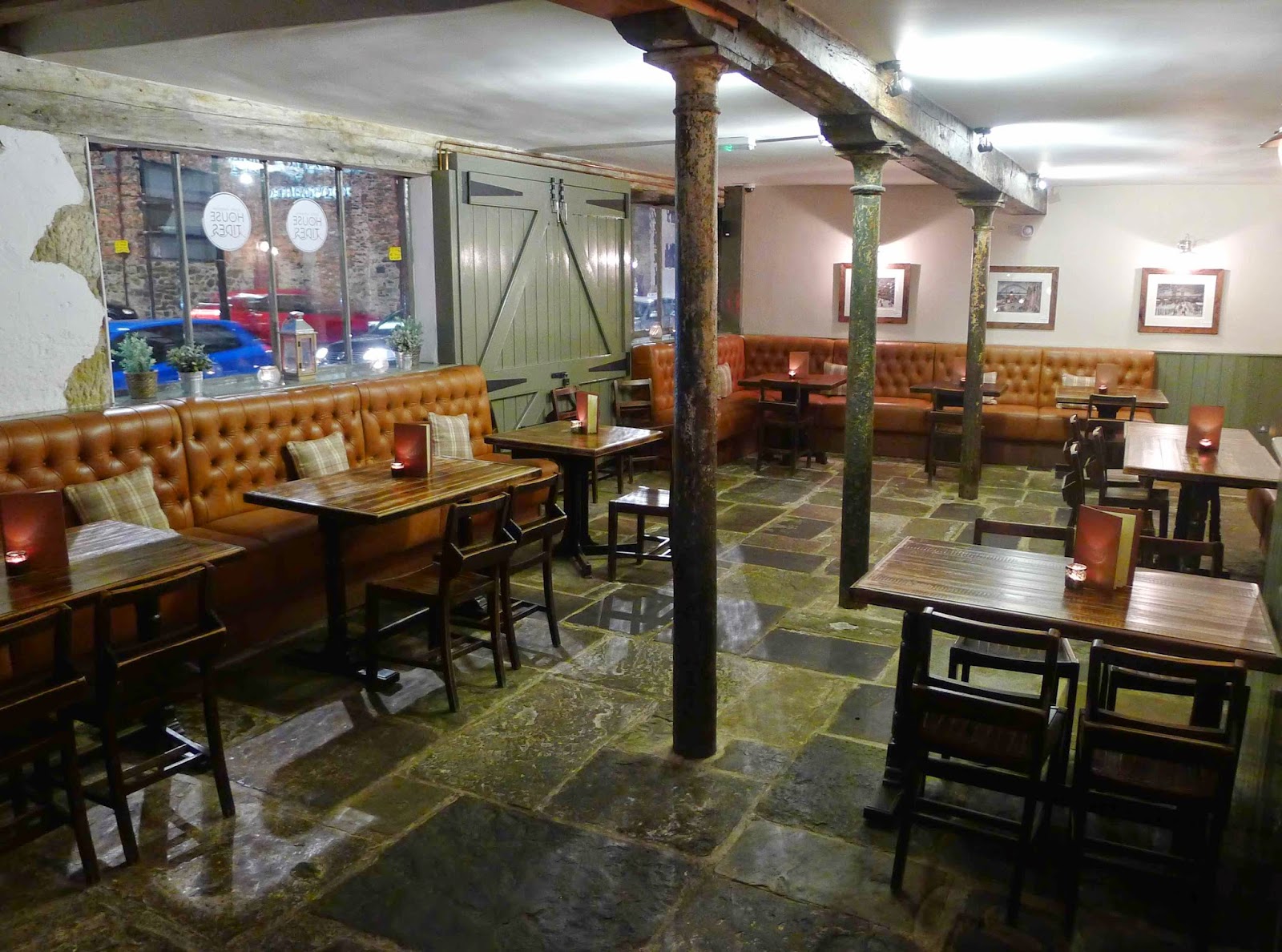 We had pre-dinner drinks and appetisers in the downstairs bar, a gorgeously industrial room of stone, metal and leather. Hulking meaty olives and warm gougeres filled with sweet onion cream were a perfectly understated start to the meal. 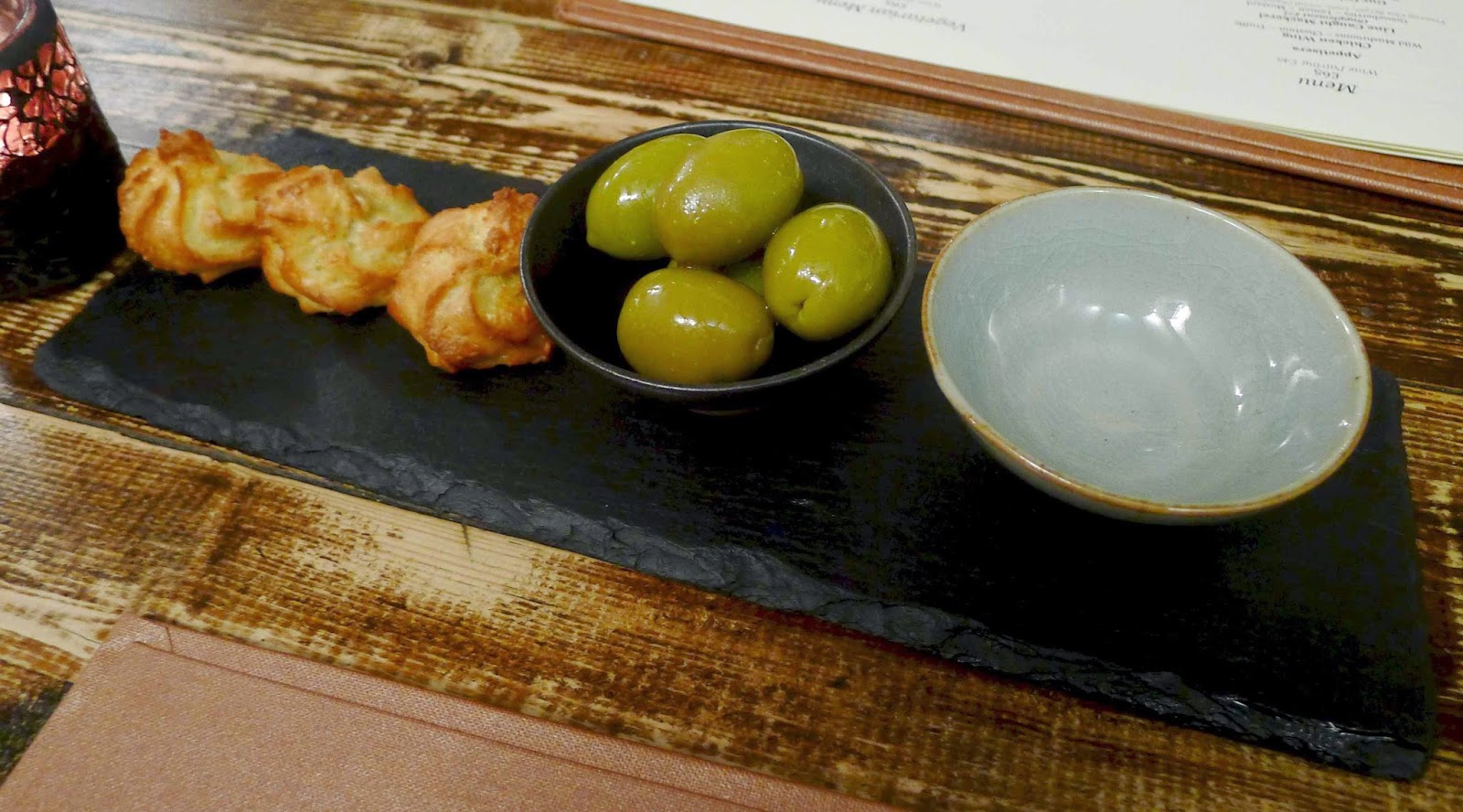 Choices made from the menu - at dinner there’s either a non-vegetarian (£65) or vegetarian (£65) tasting menu, a choice of meat courses and the option of a couple of extra courses – we migrated to the upstairs dining room. 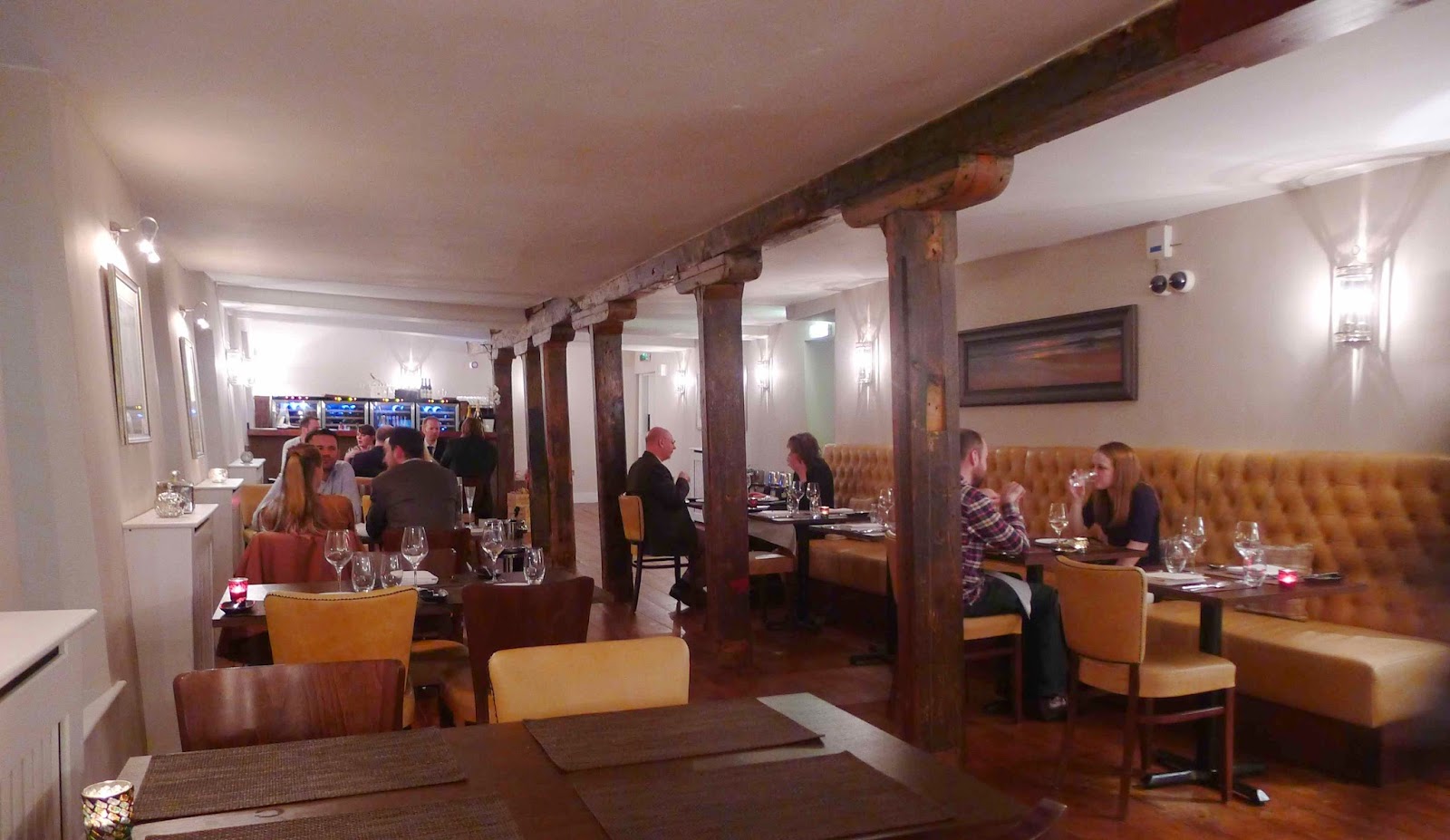 The first course was the standout of the night and perhaps my entire year. A golden de-boned chicken wing, perched on a squirt of buttery potato puree, was topped with truffle shavings and bathed in chicken and mushroom broth. 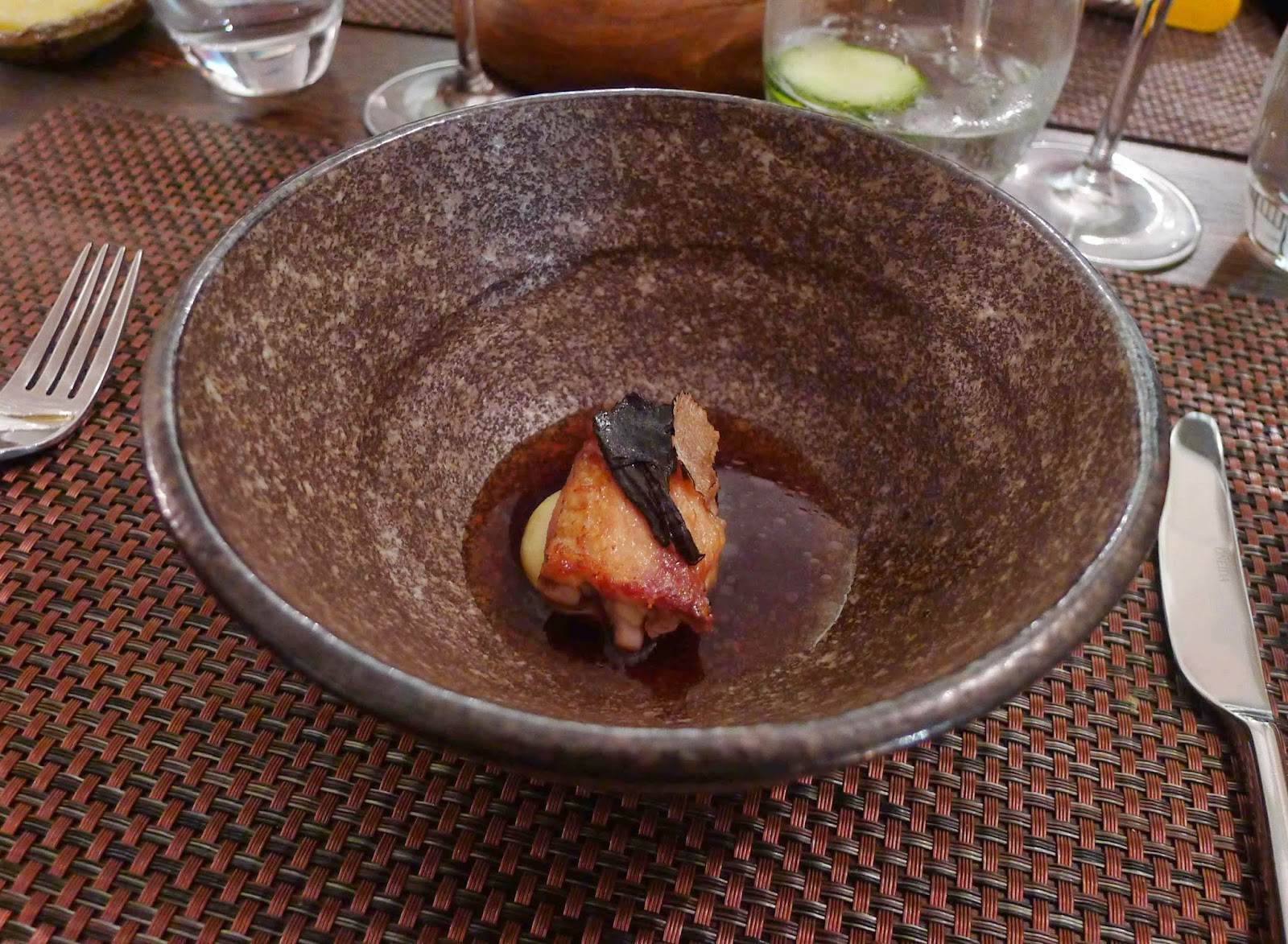 To compound the dish’s intense fragrance and savouriness, it was served with intoxicating wild mushroom arancini... 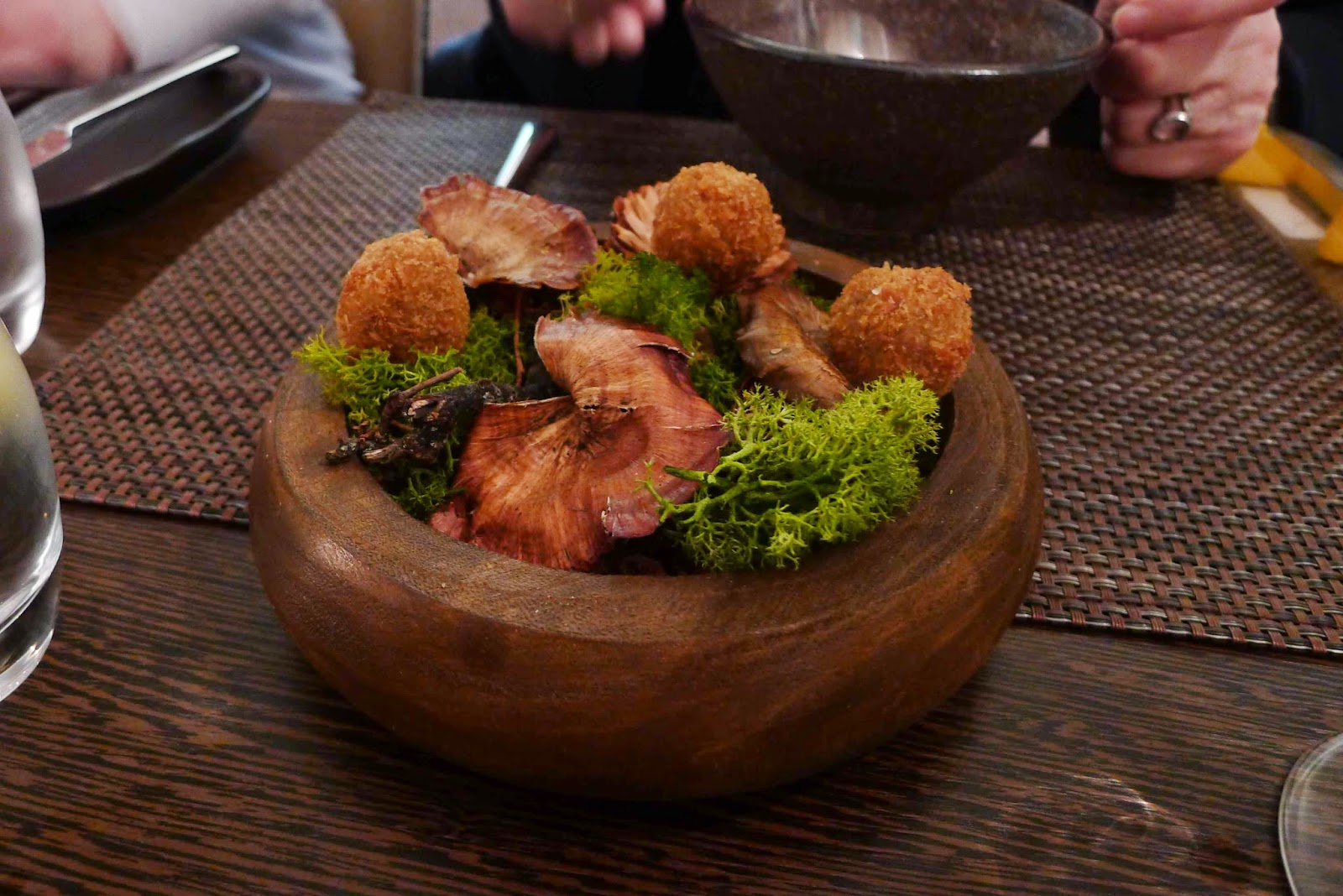 and a whizz-bang dry ice aroma of wild mushrooms. 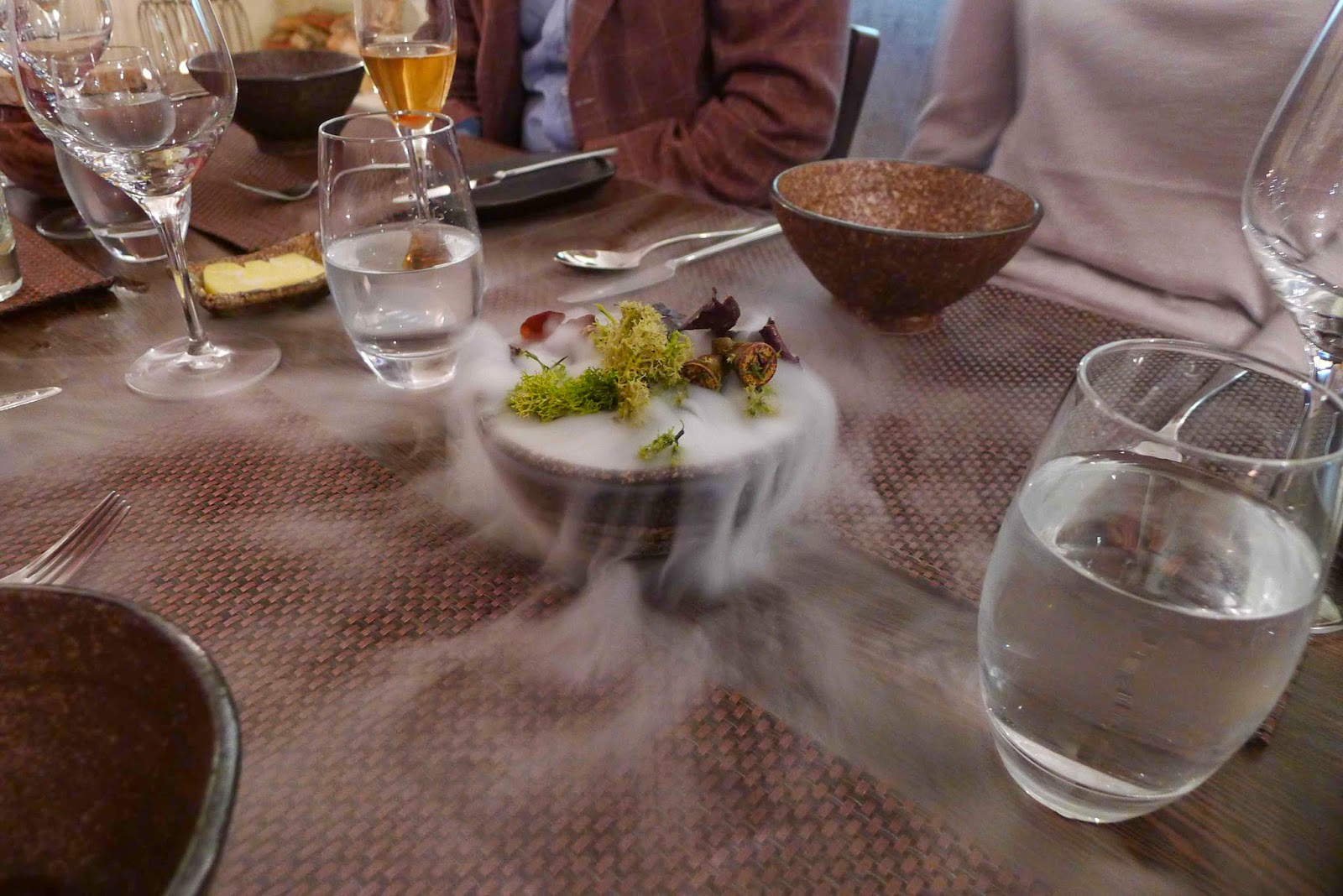 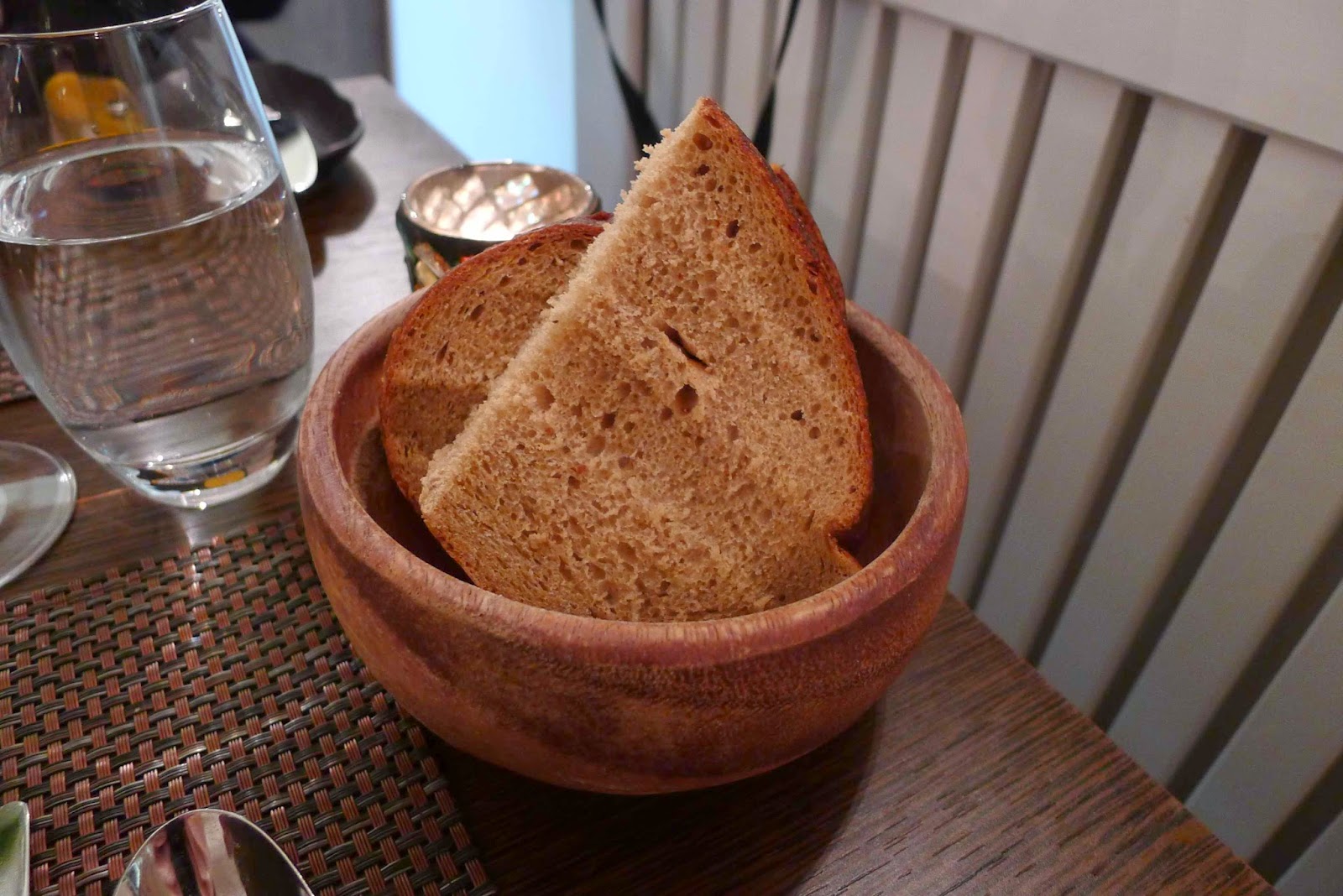 Kenny’s signature dish, his banquet winning starter from the Great British Menu 2008, mackerel with textures of gooseberry was served at a supplement of £7.50. Tender fish rolled in crisp fried bread was served with a smear of fiery English mustard, sweet gooseberry jelly and puree, and sharp whole gooseberries.

It was undoubtedly a very tasty dish but most certainly a victim of it’s own hype – it was neither the best of the night nor deserving of the immodest supplement for the modest ingredients and portion size. Half a seared scallop was served with roast and pureed pumpkin and toasted pumpkin seeds. Crumbs of parmesan biscuit and a parmesan foam brought balance to this earthy, sweet and savoury dish. 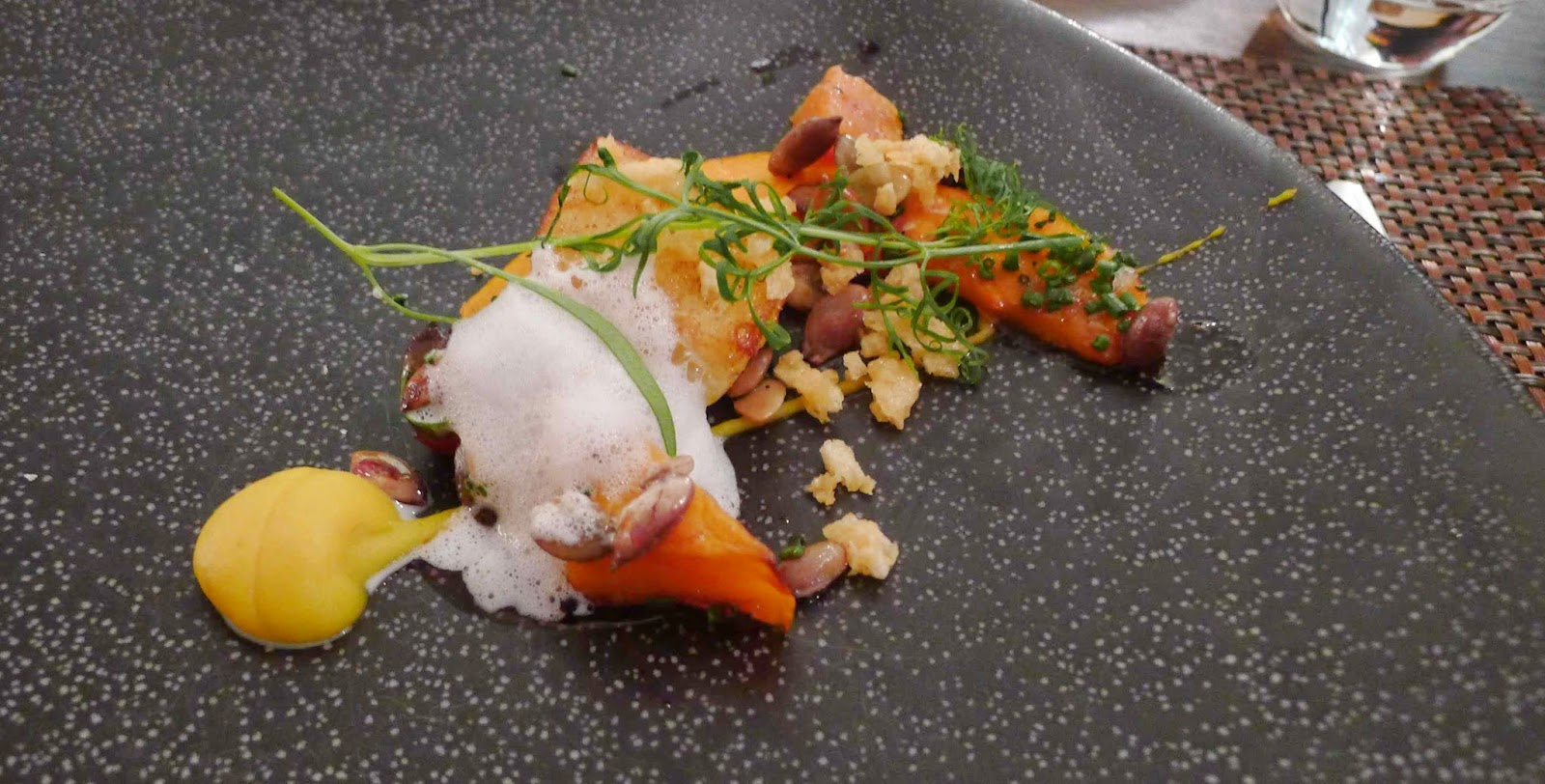 Next up was a tender heritage potato terrine layered with tangy goats cheese and parsley. Vivid beetroot, crumbed golden-yolked quails eggs and mustard-rich coleslaw contributed to a luxury dish, which was no worse off for its vegetarian status. 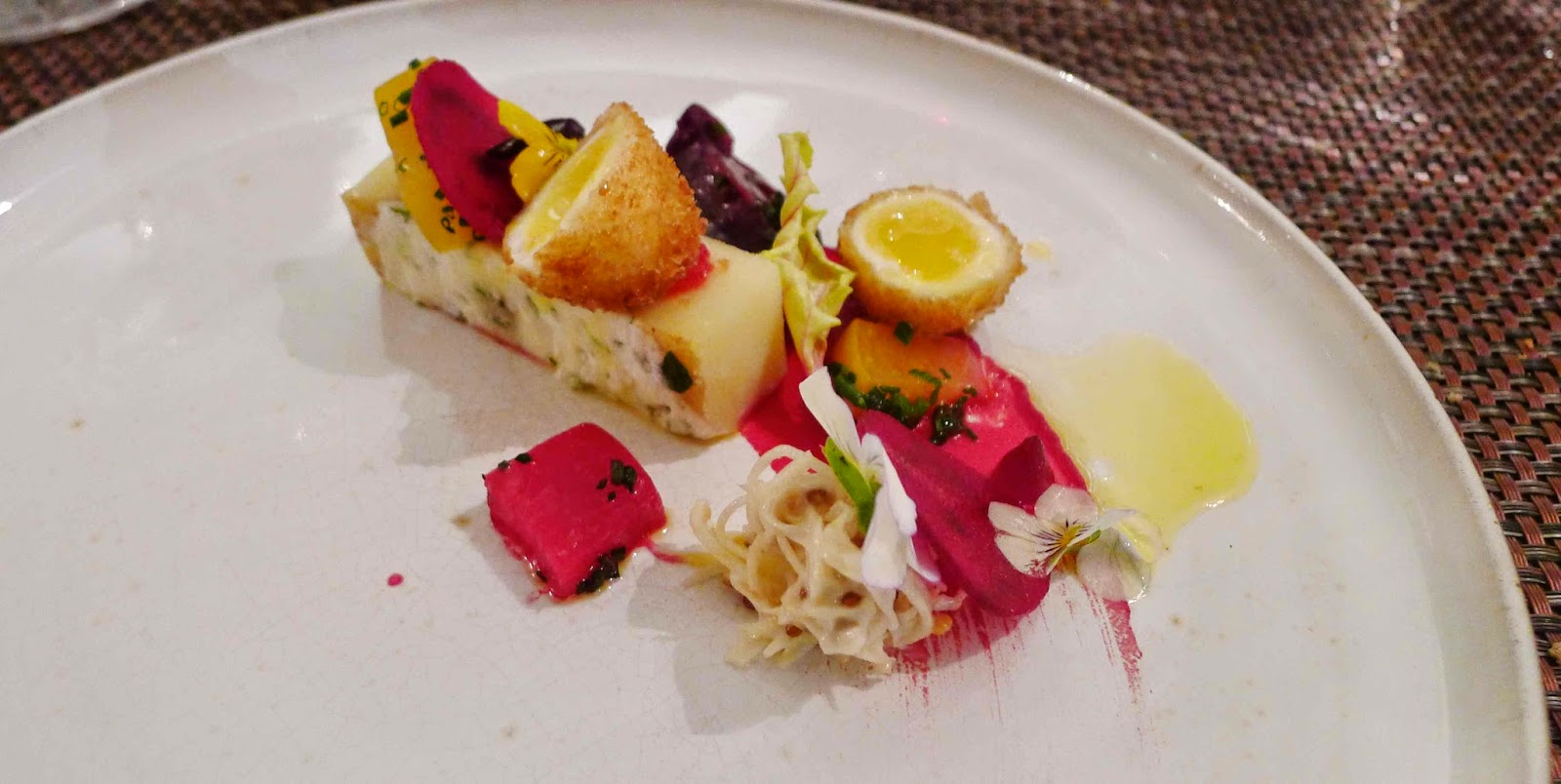 For the meat course, the table was split down the middle in choice.

For Mrs G, blushing venison, leaves of brussel sprout, spiral Chinese artichokes, meaty gravy, a cake of duck fat roast potato and richness moderating blackberries. This was a good dish but not as impressive as the one on the other side of the table… 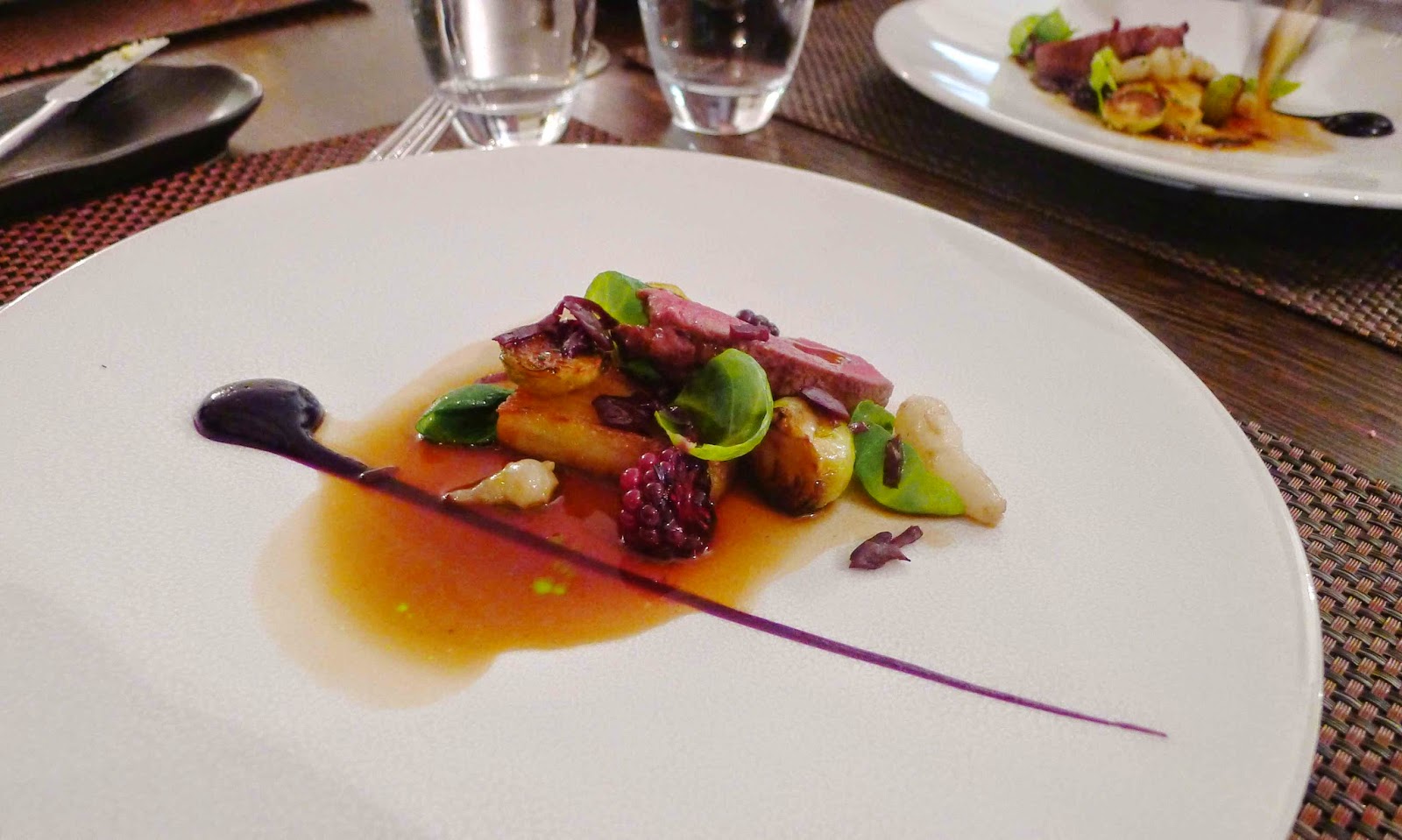 My dish was more substantial in taste and portion. The ultimate Sunday roast, it comprised of breast and rolled leg of partridge (it tasted like a slightly denser, more intense tasting sibling of chicken), sweet poached pear and roast parsnip, crisp kale leaves, a mountain of buttery Jerusalem artichoke puree and meaty gravy.

The only negative - the roll of leg meat was a touch dry, lacking the juiciness I associate with this part of the bird. 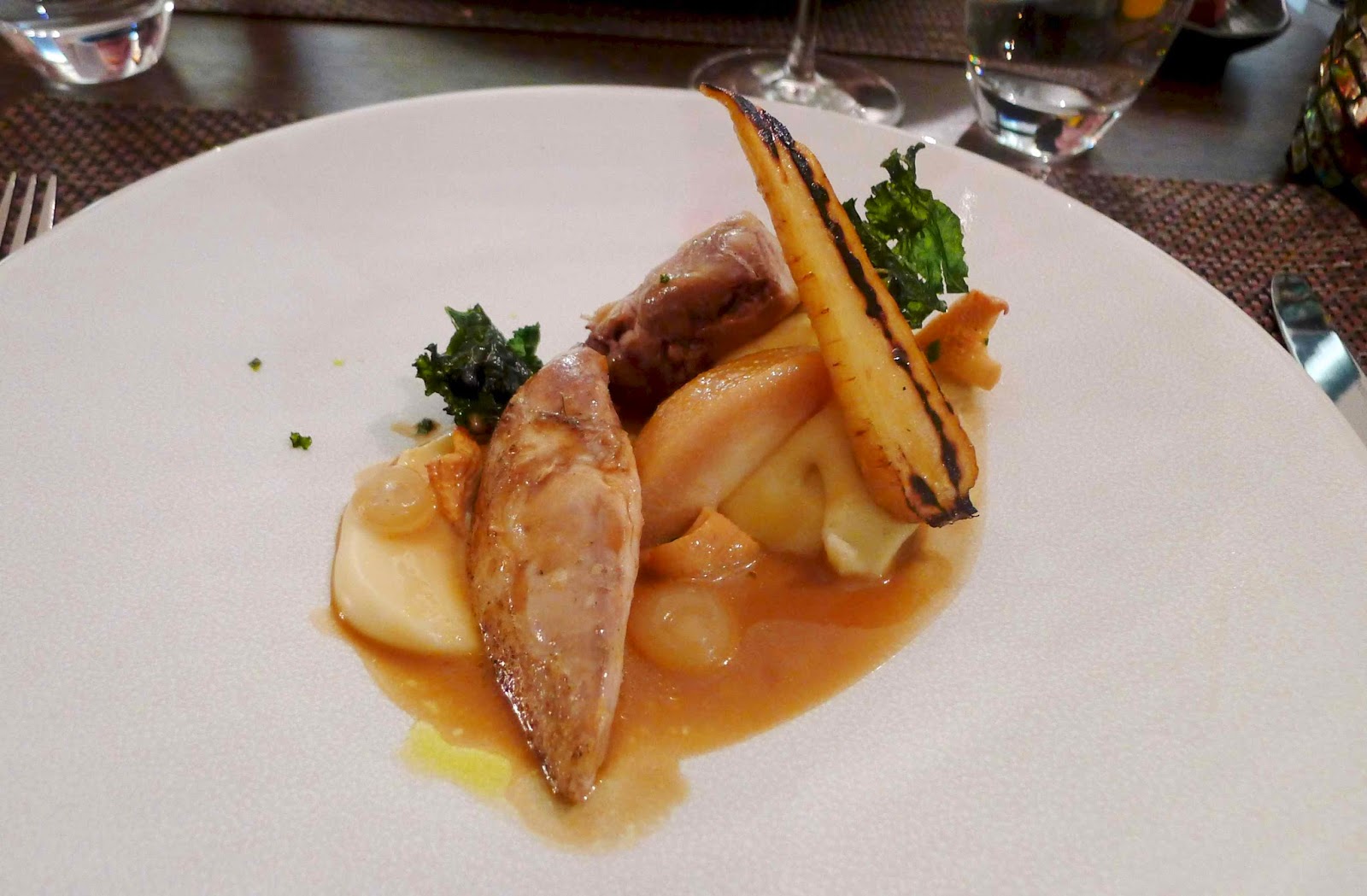 Cheese was an absolute bobby-dazzler and represented far better value for money for its £8 supplement than the mackerel course earlier. British in origin across the board, it demonstrated we can hold our own as a nation in the cheese-making stakes. The Admiral Collingwood, a cows' milk cheese with a rind washed in Newcastle Brown Ale, was seriously complex and savoury whilst Colston Bassett and Stinking Bishop brought their familiar intensity to the plate.

Fruit and nut bread, salty crisp breads, truffle honey and a brick of quince jelly were the finest of accompaniments. 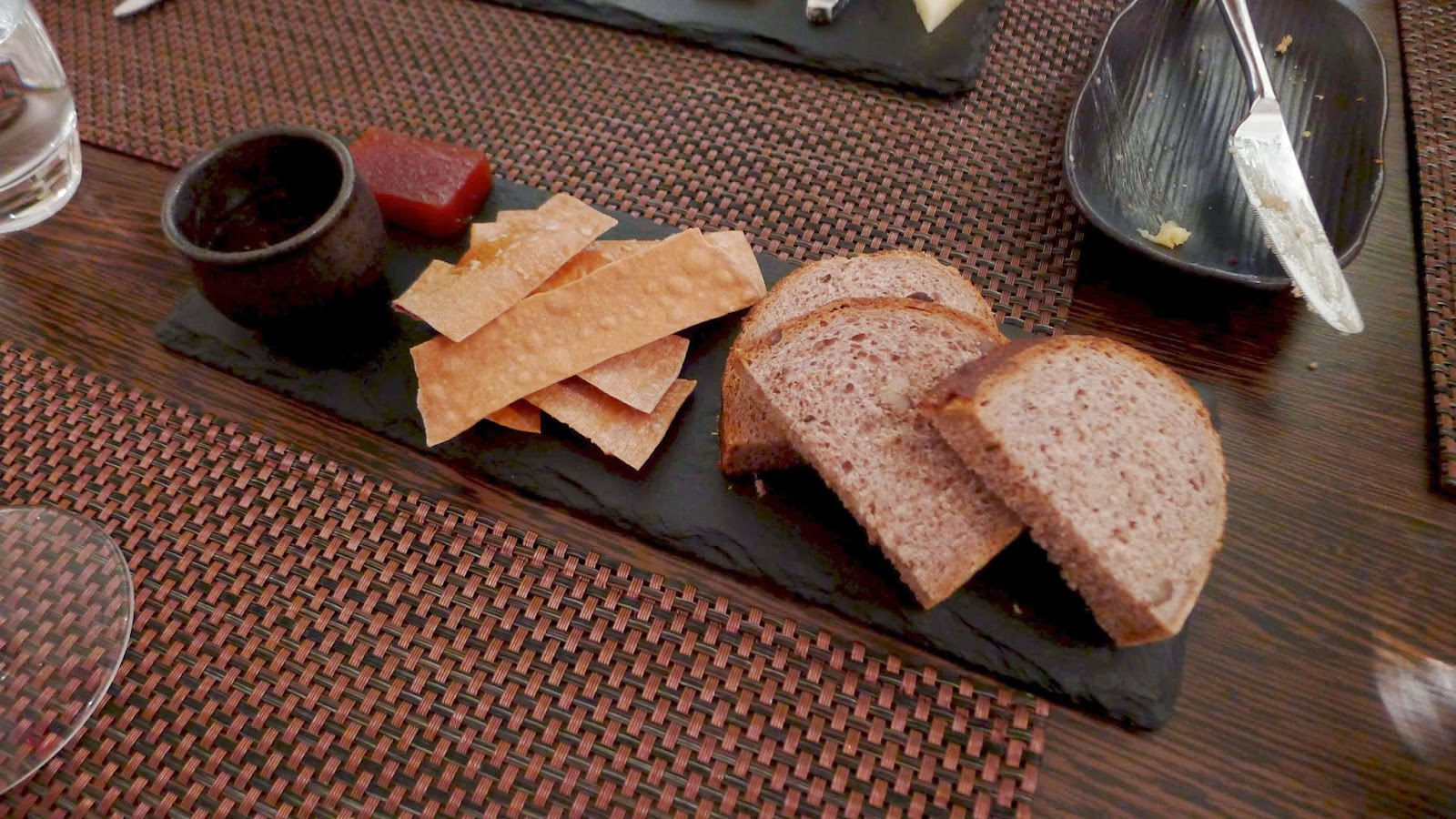 The first of the desserts, a mini Magnum of creamy coconut ice cream coated in white chocolate, was accompanied by uber-sharp mango and passion fruit sorbet, and blobs of mango puree. The sweet and sharp elements balanced perfectly. 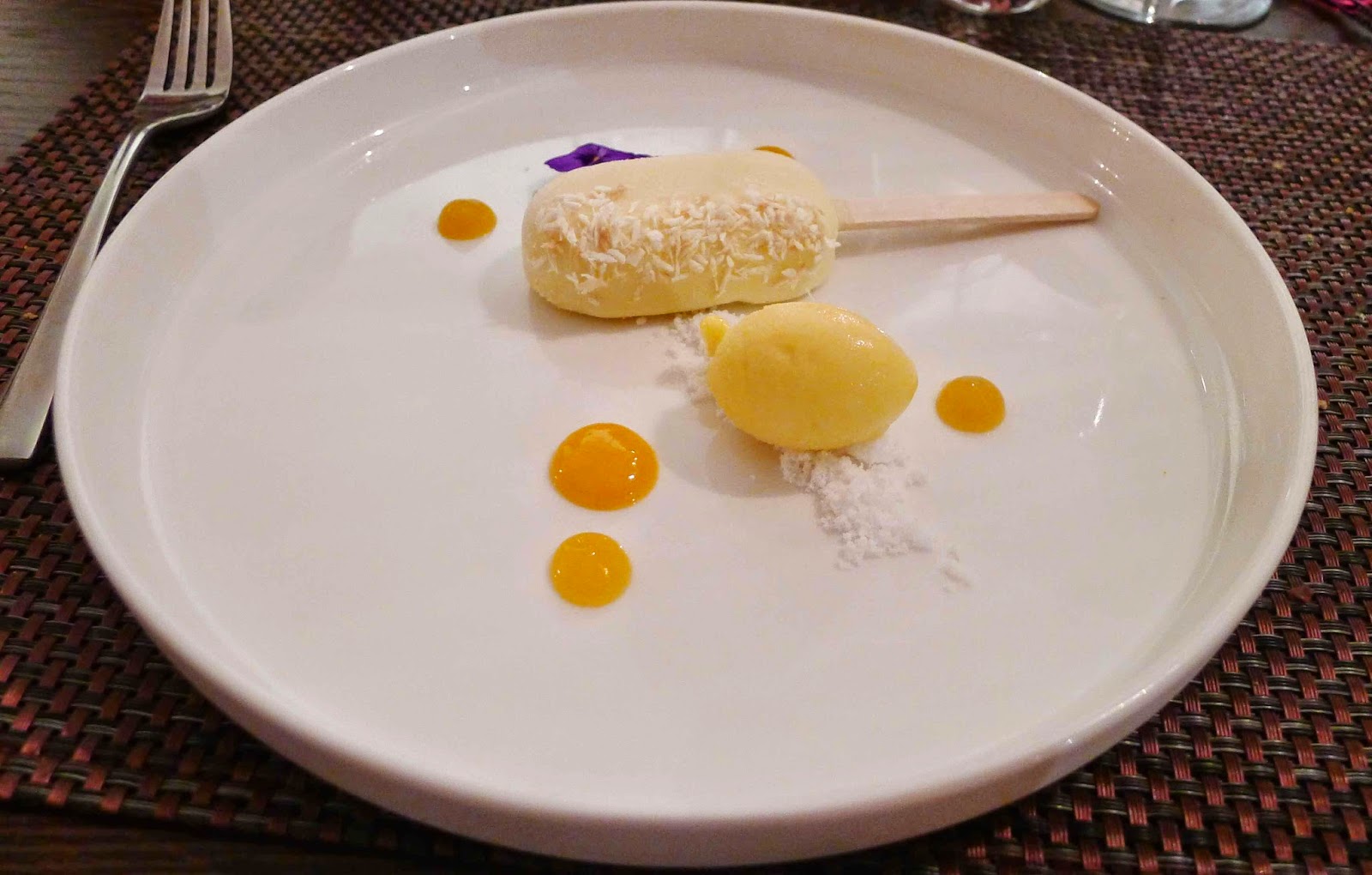 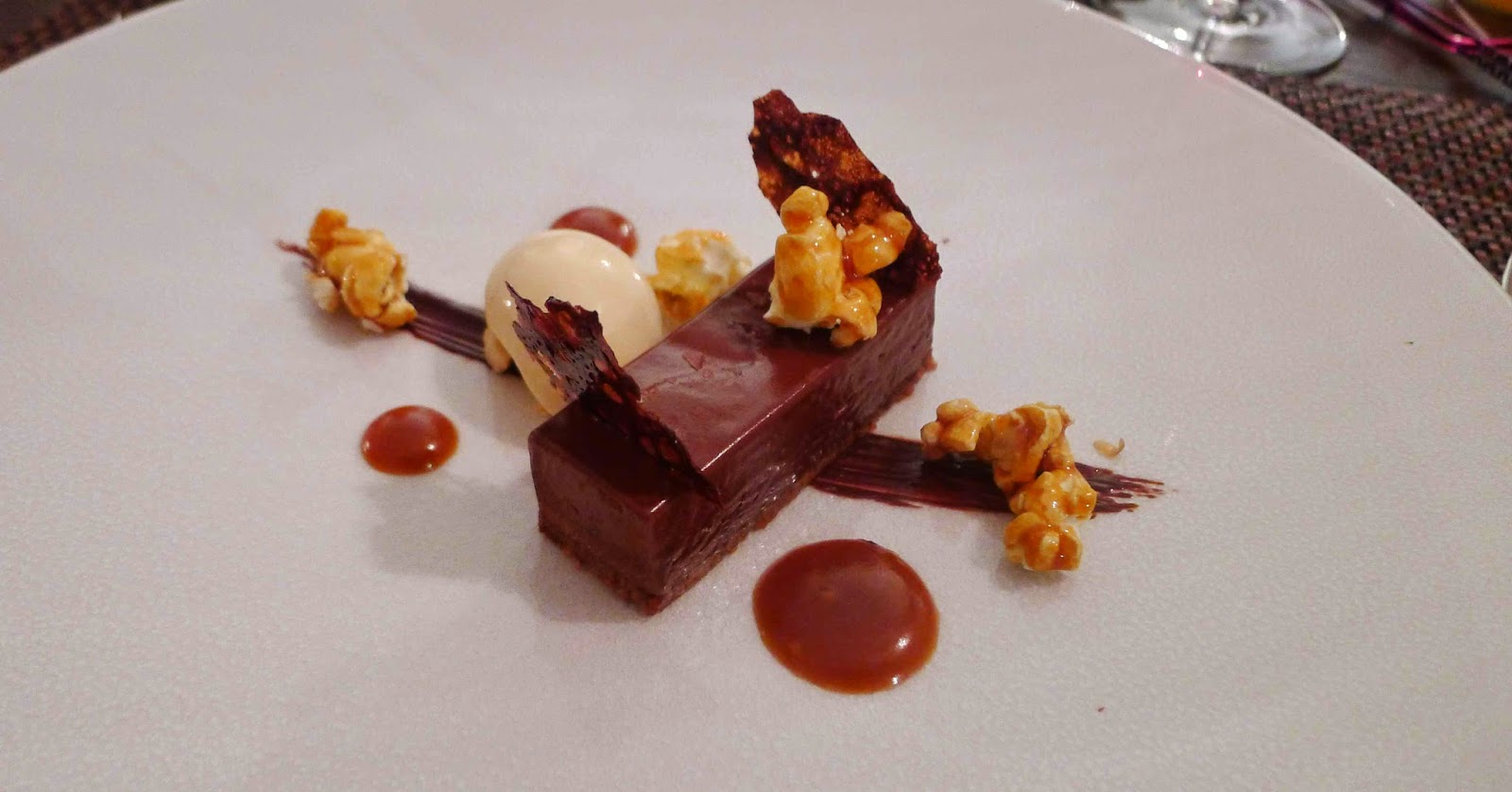 A trio of truffles accompanying coffee (£4) rounded off the meal – a violet cup which carefully steered away from potpourri territory, a mild whisky truffle and the pick of the bunch, a salted caramel and peanut butter cup (essentially the ultimate Reese’s). 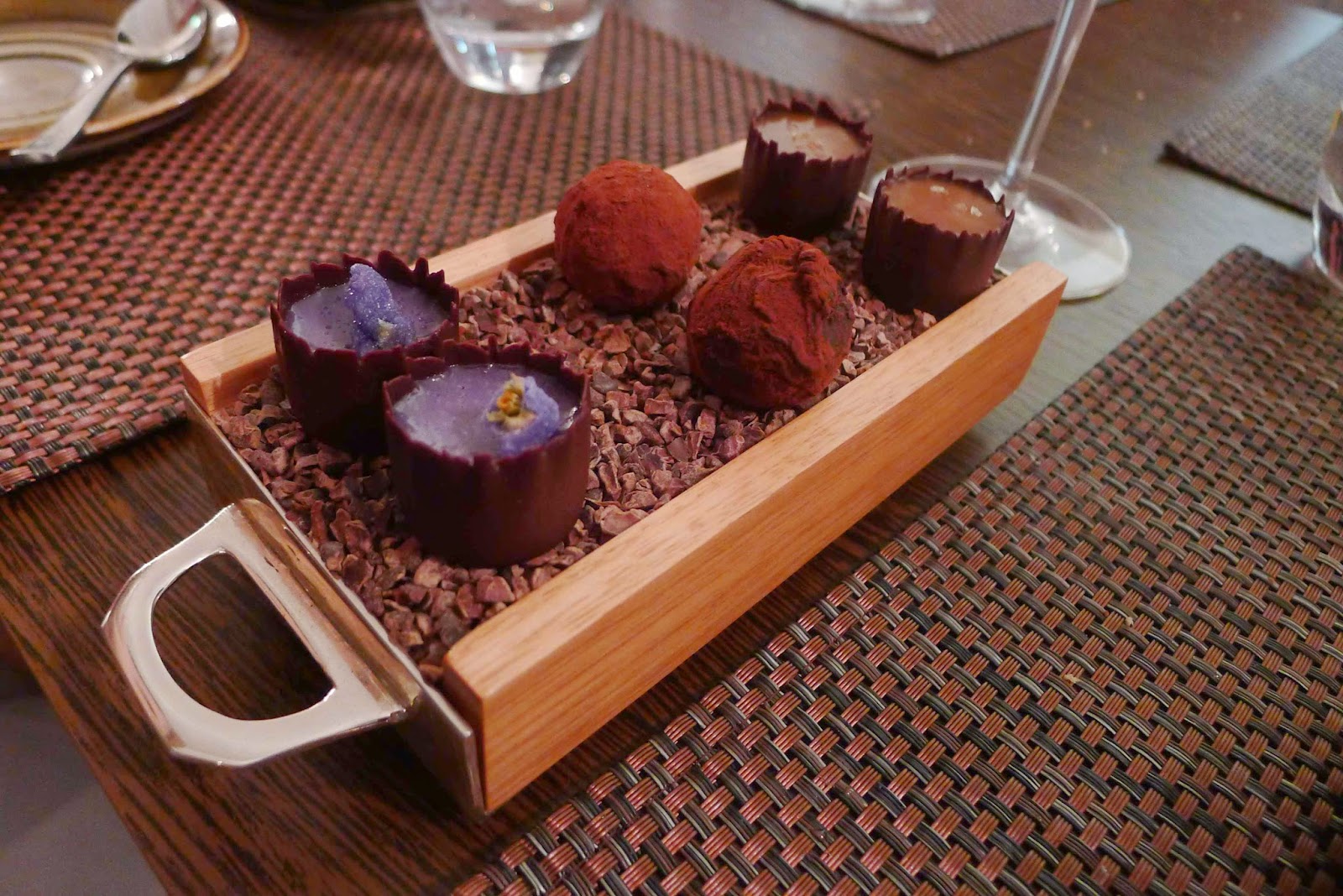 Dinner at House of Tides was stonking. It’s great to see a local chef successfully open a destination restaurant in the shadows of the Tyne. It’s great for me too as it’s given me additional incentive to make the pilgrimage back to the North East of England more often.