I normally visit the Big Smoke a couple of times a year. But, as new restaurants spring up quicker than Trump parody Twitter accounts, my to do list is around a hundred places deep.

At Kiln, blazing heat emanates from the open kitchen where Thai food is cooked on wood burning grills and ovens. I perched at the counter in this no-reservation restaurant that was pretty much full by midday. 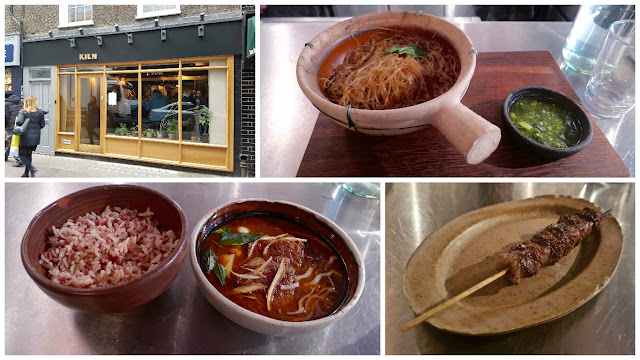 
Clay pot baked glass noodles (£5.75) were tossed with a spicy gravy flecked with earthy brown crab and pieces of fatty mangalitsa pork shoulder. A sour citrus dipping sauce cut through the richness of the dish.

A short rib curry (£7.50) saw yielding slabs of beef in a sauce that hummed with wild ginger.

After a mere ten-minute wait in the queue, I was finally ready to experience the hype of this Taiwanese restaurant. 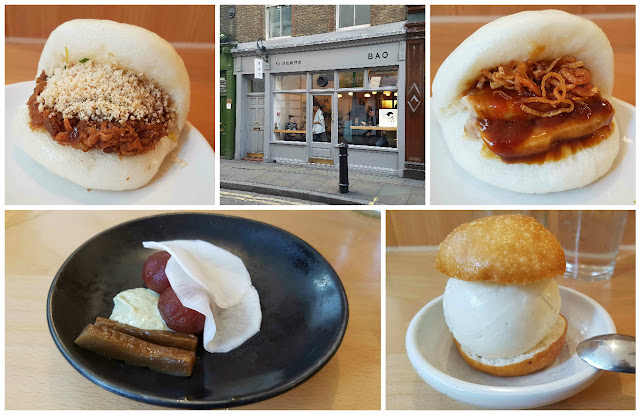 A pillowy soft classic bao (£4.50) was stuffed with shreds of meaty pork topped with powdered peanuts and coriander.

Another was filled with tender confit pork belly (£5) in a tangy sauce and crisp fried shallots.

A side of richness busting house pickles (£2) were on the nail.

The highlight of the meal was dessert, a fried bao (£4.50). The uber-fresh dinky doughnut like bun was stuffed with delicately malty and seriously creamy Horlicks ice cream.

It’s often said that meals can transport you to another time and place - Zédel, a subterranean French brasserie on the grandest of scales, achieves this more than most. From an accordion playing chanteuse to our aperitifs in the Bar Américain, everything was pitch perfect. 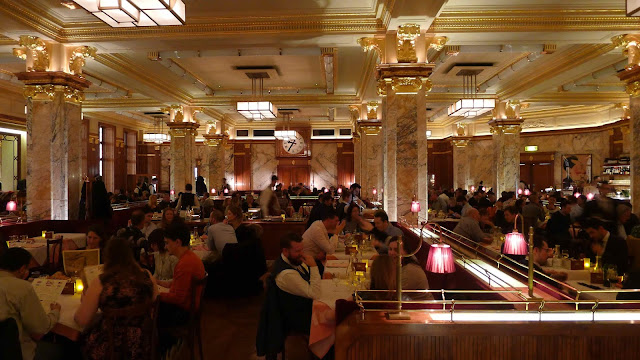 The food, whilst not life-changingly brilliant, was good and well-priced for central London. But, it’s more than worth a visit for the experience alone. 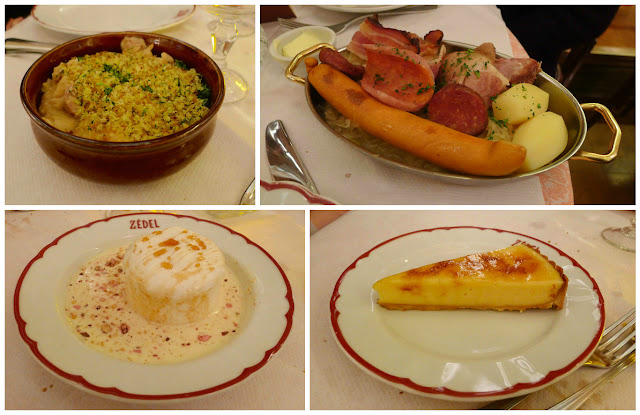 Choucroute Zédel (£15.75) was a big brute of a dish. Sauerkraut fragranced with clove and caraway was topped with boiled potatoes, thin pork belly slices, a hunk of pork knuckle and a snappy frankfurter. It wasn’t refined but it was perfect for a cold winter’s night.

Dessert was the highlight. An ile flotante (£4.50) saw floaty light meringue sat in a bowl of creamy vanilla custard topped with candied nuts, caramel and pistachios.

A silky smooth tarte au citron (£4.25) had a big thwack of lemon but the base could have been a tad crisper.

It’s hard to take a fried chicken and cocktail shop like Chick ‘n’ Sours too seriously and thankfully they’re not at all po-faced. From the irreverent logo to the friendly barman who chatted to me throughout lunch, this place had good vibes. 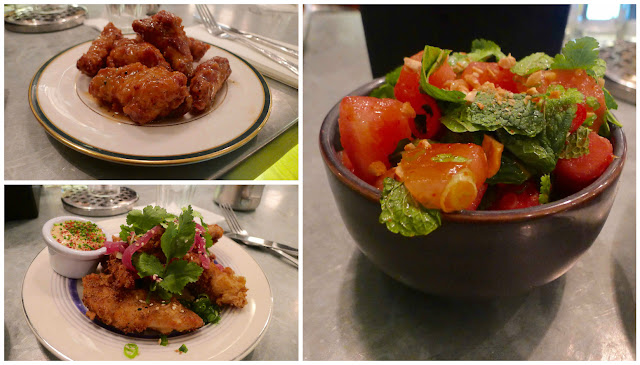 Sticky wings (£6) were crisp and plump as heck. They were coated in finger licking sweet and tangy sauce.

Xian xian spiced chicken tenders (£9) were super crisp of crumb and tender of flesh. The Asian spicing and pink pickled onions made for a top-drawer fried chicken dish. A little pot of fiery sriracha mayo (£1) was a lovely dip.

The knockout dish of the meal was an epic pickled watermelon salad (£5), the perfect foil for all that fried food. The ever so delicately pickled fruit was still sweet and juicy and topped with crushed peanuts, fresh mint, coriander, red chillies and a lime and fish sauce-based dressing.

At Four Seasons in Chinatown, people crowd in at midday to try their legendary roast duck. Described by Nicholas Lander as the best in the world, this is what old skool hype is all about. 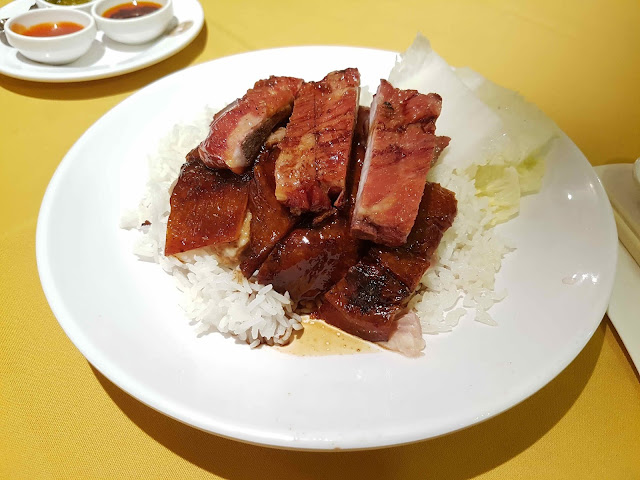 I ordered the triple roast meat (£9.30) with rice so I could put a number of their meats to the test.

Roast duck was tender as you like with glossy thin skin. Char sui pork was also excellent with its beautifully sweet marinade. Barbecue ribs however were disappointingly cold and tough.

Dumplings Legend, another Chinatown institution, was also pretty full by midday. It’s all about their Siu loung bao (£6 For 8).

The delicate dumpling cases cleverly contained a spoonful of rich pork broth and a light pork mince filling. Dipped in vinegar, each mouthful was a compelling proposition. 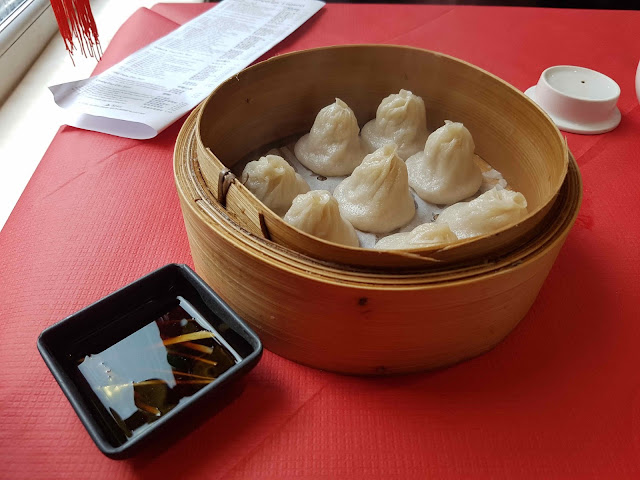 Located in an old library in the heart of Westminster, Cinnamon Club is the swankiest of Indian restaurants. Mrs G and I played a game of spot the politician as we ate breakfast.

Bombay scrambled eggs (£7.50) were heady with spice and flecked with tomato and caramelised onion. They were joined by a serviceable flaky parotta and an under-baked tomato. 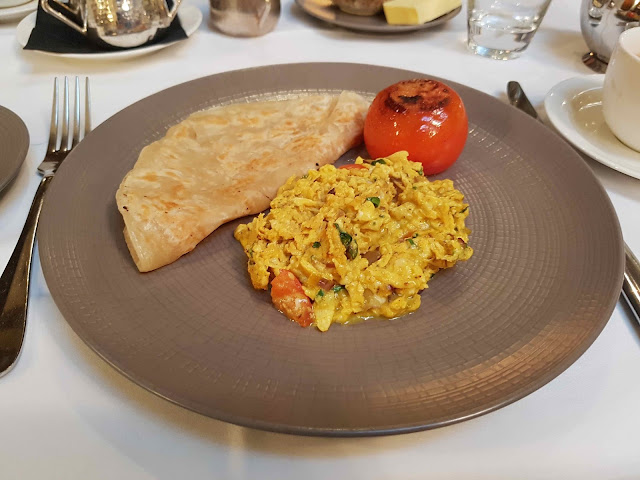 I had an epic time eating in London. I hope I'll be able to make further inroads into my London to do list in 2017.