*Update* - Small Bar has now closed and has reopened as Beelzebub's 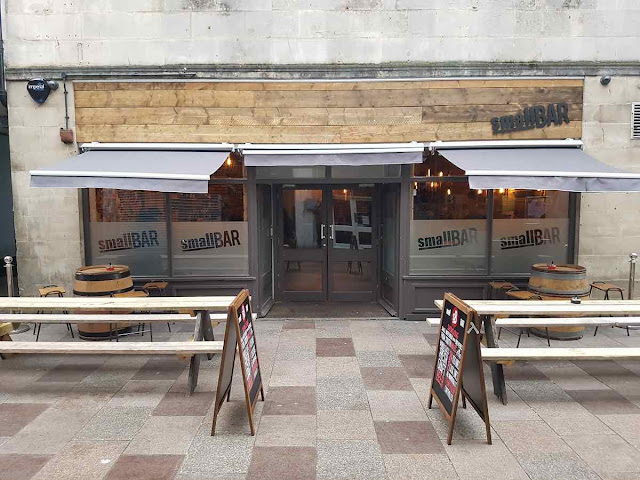 Small Bar is a brilliant boozer.

This craft beer pub, located on Cardiff’s Church street, is one of the main reasons (alongside Roath Bottle Shop) why I’ve developed an expensive habit for hoppy IPAs and fruity sour beers. Any money which I didn’t spend on food, now goes on craft beer. 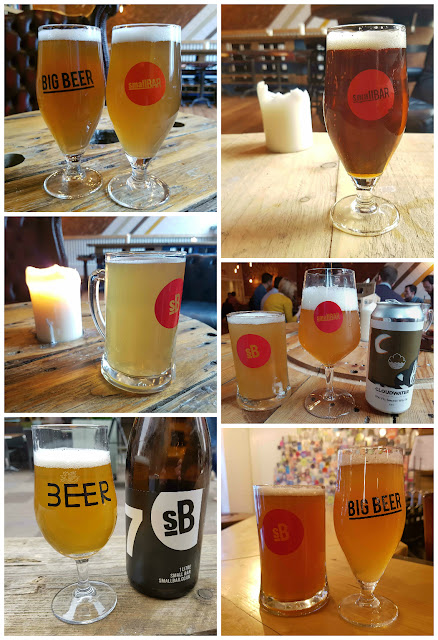 Small Bar’s name comes from the awesome small breweries like Magic Rock, Beavertown, Cloudwater, Wylam and Northern Monk who are represented on their ever changing list of 31 beers on tap.

Owned by a former director at BrewDog, Small Bar’s owner also runs Bristol’s Left Handed Giant Brewery and craft beer distribution company The Big Beer Co. Making, distributing and selling your own beer seems like a smart move to me. 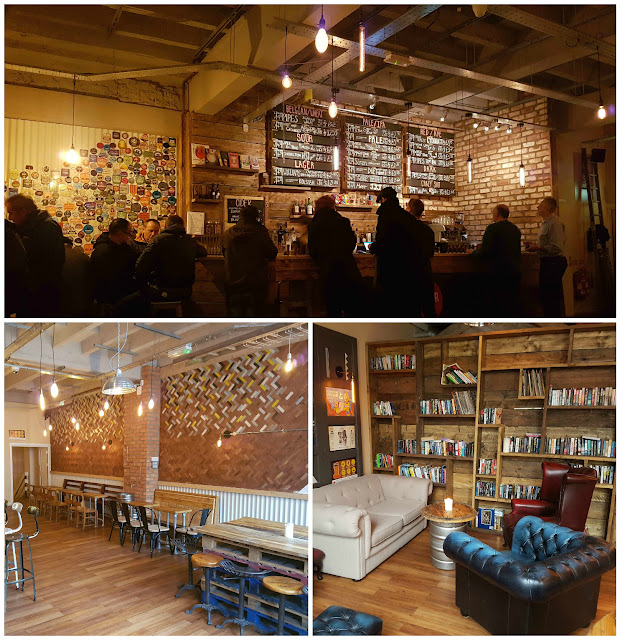 But, enough about the booze.

Small Bar’s food menu features the kind of high end junk food that goes hand in hand with beer - burgers, hot dogs and pizzas. On a Sunday they do roasts and there are offers on chicken wings on Wednesdays and 2 for 1 pizzas on Mondays. 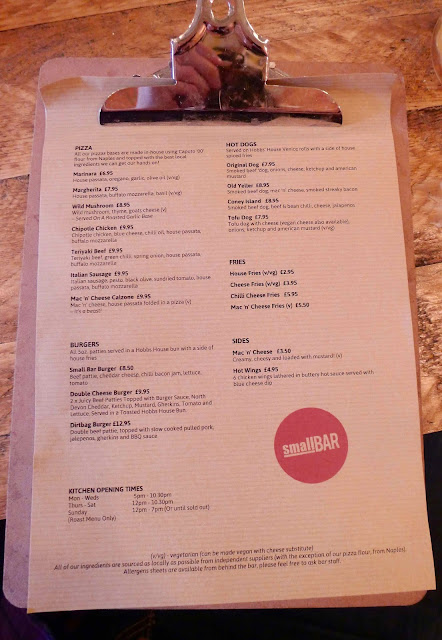 We gave the three main components of the menu a run for their money.

An original dog (£7.95) was pretty much bang on. A soft brioche roll nestled a deliciously snappy smoked beef wiener, sweet fried onions, a scattering of melted cheese and a squeeze of ketchup and American style mustard. Skin on fries were lovely - perfectly crisp, well-seasoned and enjoyably fluffy. 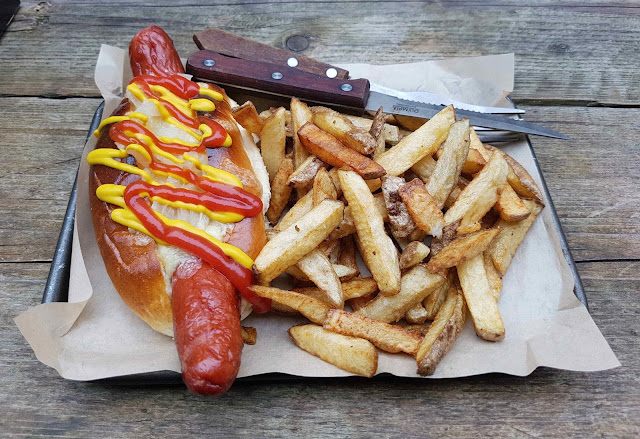 A wild mushroom pizza (£8.95) wasn’t a looker but it tasted good. A crisp crusted base with a decent sag and chew was topped with potent garlic butter, meaty fungi, fragrant thyme. an ooze of mozzarella and crumbled tangy goats cheese. 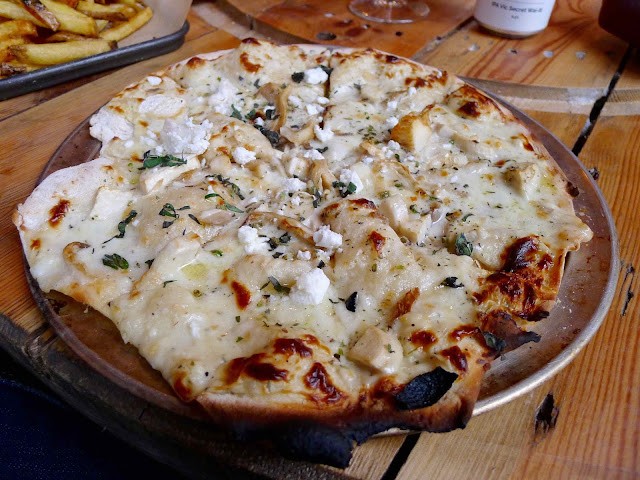 The double cheeseburger (£9.95) looked the part but didn’t quite deliver - a soft toasted Hobbs House bakery seeded bun was stuffed with two giant patties, melted cheddar, crisp gherkin, lettuce and tomato. The advertised condiments were ketchup, mustard and burger sauce but I don’t think any of these were present. Instead a pleasant smoky tomato relish sat on the bottom. 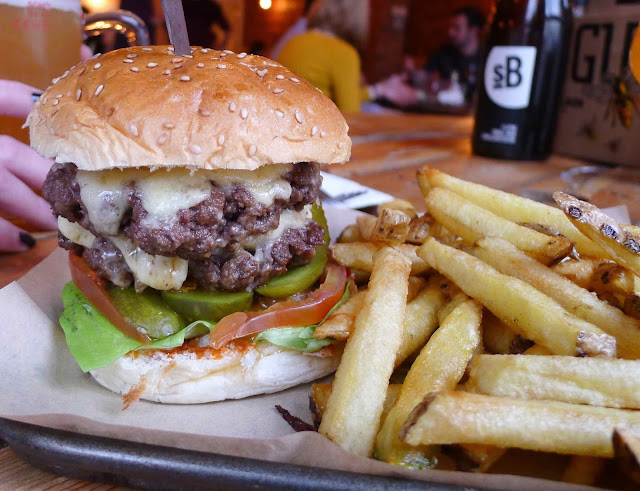 Also, as the patties were served well done, it turned out to be a bit of a beef overload. 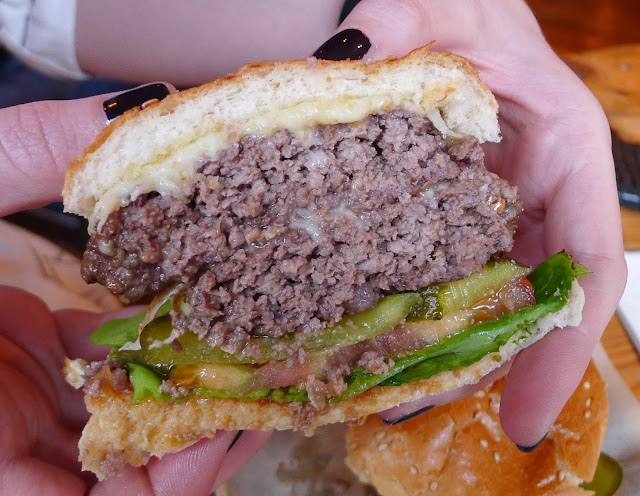 The food at Small Bar is tasty. It won’t win any awards but the beer will. And for that reason I’d highly recommend a visit. Spend an evening there and work your way through their superb range of beers and order some food to soak up all that booze.