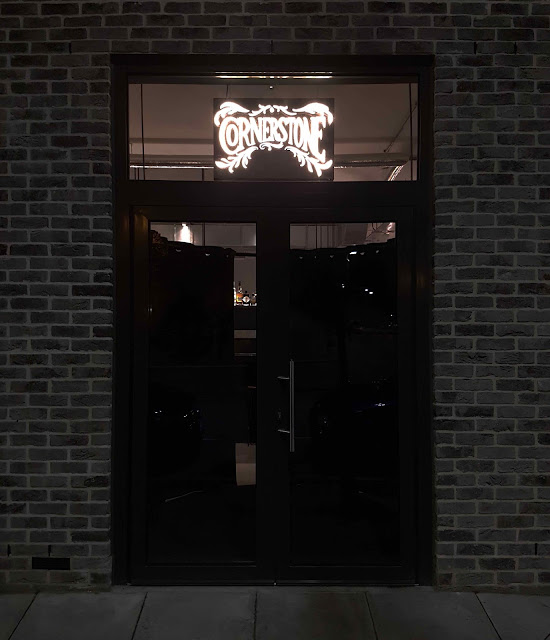 Cornerstone in Hackney Wick is owned by Tom Brown, former head chef of the Michelin-starred Nathan Outlaw at The Capital (where I had one of my best meals of 2017). Understandably, as a protégé of Outlaw and a fellow Cornishman, Brown specialises in fish cookery.

The restaurant is a stark industrial space which is dominated by a big open kitchen with counter seating. It feels very hip, very Hackney. 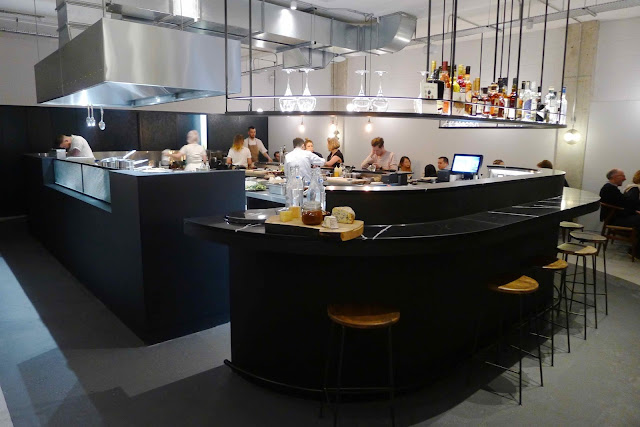 The menu comprises of small plates; always a bit of a risk as a punter as you often get less bang for your buck and run the gauntlet of having to split an egg three-ways.

We ordered the chef's selection (£45 a head) which allowed us to put most of the menu through its paces. We also ordered a couple of extra dishes. Natch.

As a table of three, ordering the chef's selection seemed to be a canny manoeuvre as we were served two of each dish - I suspect a table of two would have received one of each. 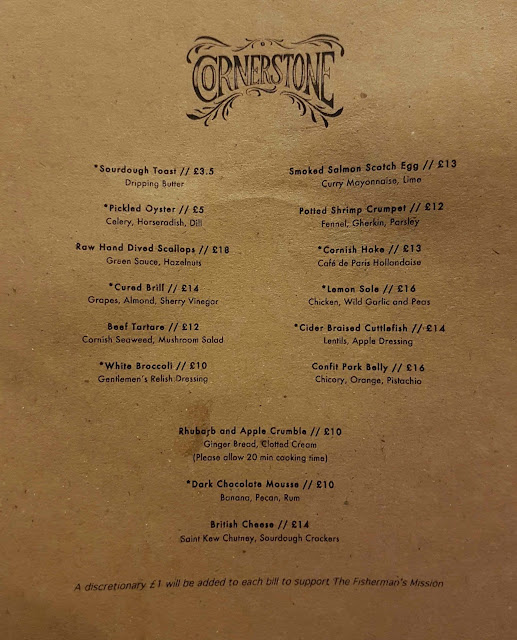 Sourdough toast with a good char and chew was served with a generous slab of meaty dripping. 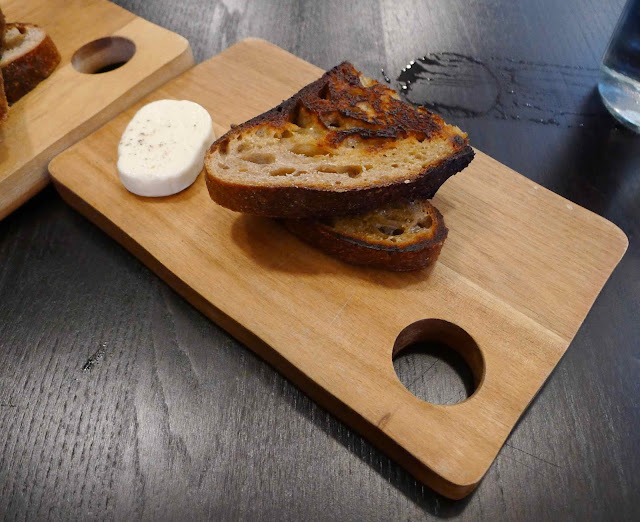 Delicately pickled oysters retained their ozonal freshness and were topped with warming horseradish cream, finely diced celery and fragrant dill oil. This was a cracking dish. 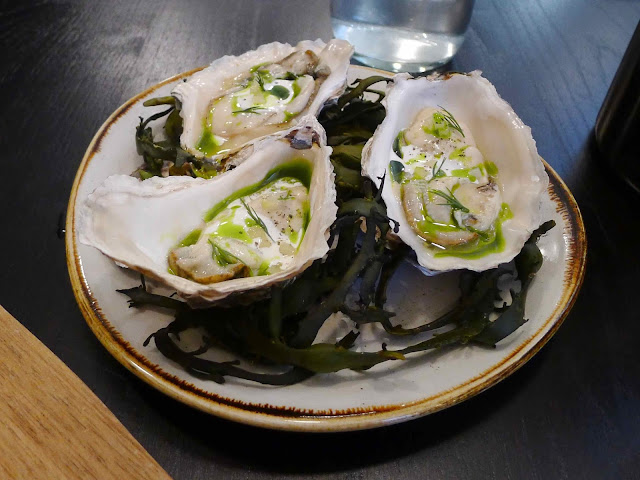 Our first extra dish was raw scallops. Tender and sweet of flesh they were joined by a verdant herb sauce and the crunch of hazelnut. But, £18 for one and a half scallops felt a bit steep. 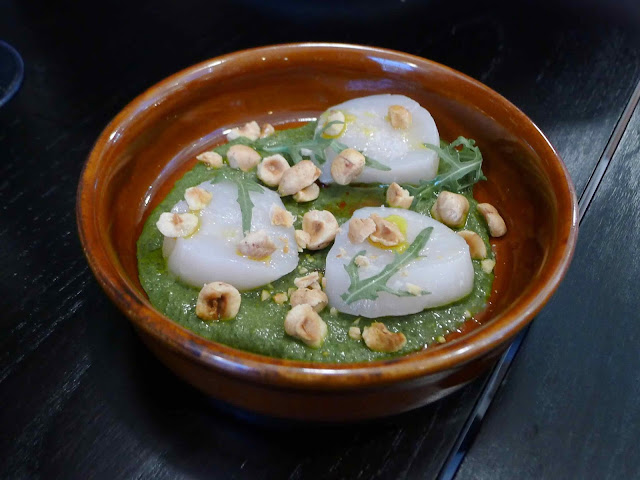 Meaty slices of cured brill were joined by an ajo blanco inspired garnish. Whilst the blobs of tangy cream cheese, toasty almonds, cleansing grapes and sherry vinegar were all delicious, it didn't really remind me of ajo blanco. I think this was largely down to the presence of the cream cheese. 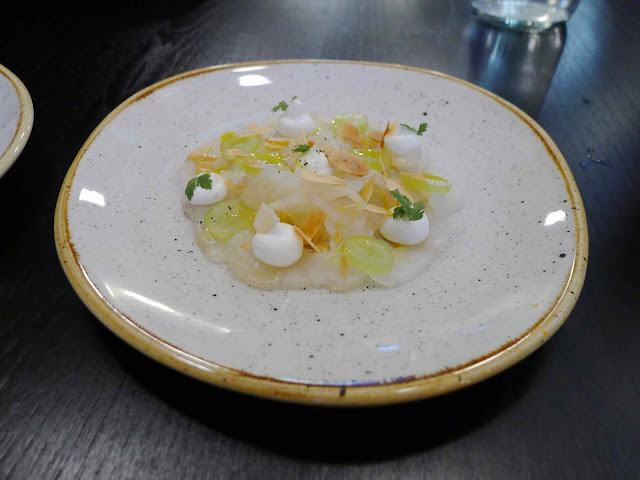 A delightful dish of al dente white broccoli was topped with a buttery sauce flecked with two types of umami-rich anchovy. Separately, this dish would have cost £10 for three bits of brassica. 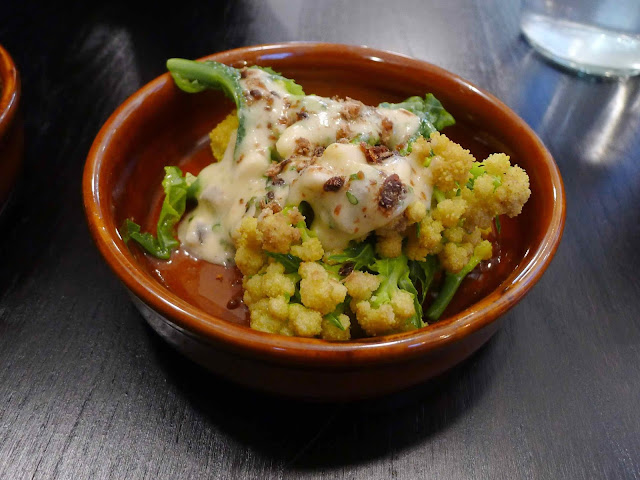 Our second extra plate saw a crisp homemade crumpet (£12) topped with a mound of mildly spiced and buttery shrimp, shavings of fennel and chopped parsley. This was a major upgrade on the crumpets and marmite I often have for my breakfast. 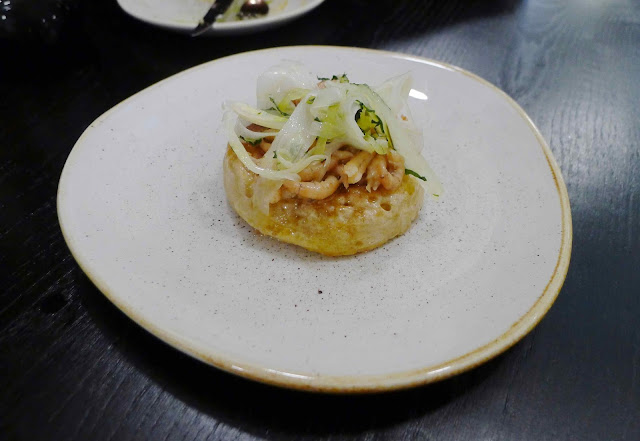 A crisp-skinned, meaty fillet of hake was joined by a chilli-thwacked cafe de Paris hollandaise studded with capers. 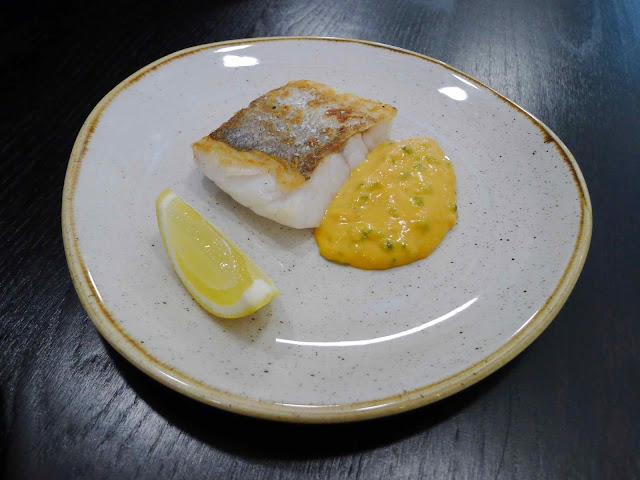 A soft and sweet fillet of lemon sole was bathed in an intense chicken jus and joined by sweet garden peas and mild wild garlic. 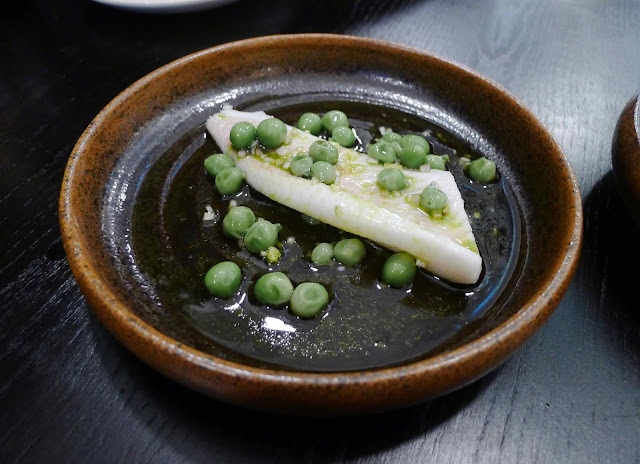 The final savoury dish was a rich stew of unfeasibly tender cuttlefish topped with richness puncturing pieces of pickled apple and spring onion. 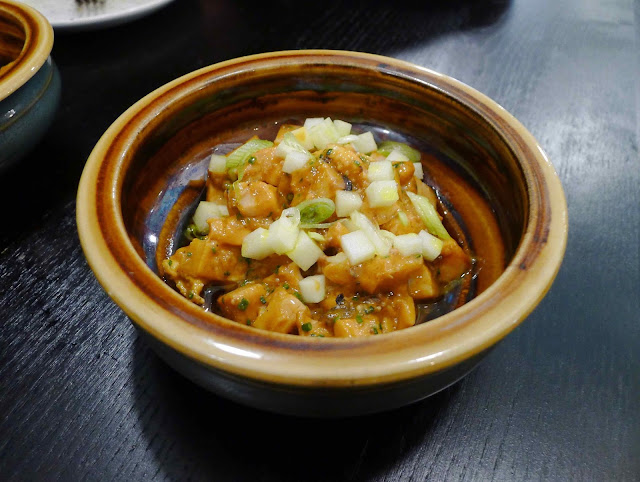 Dessert, a few blobs of tasty things, was good but didn't wow. A milky chocolate mousse was served with caramel topped banana, custard and candied pecans. 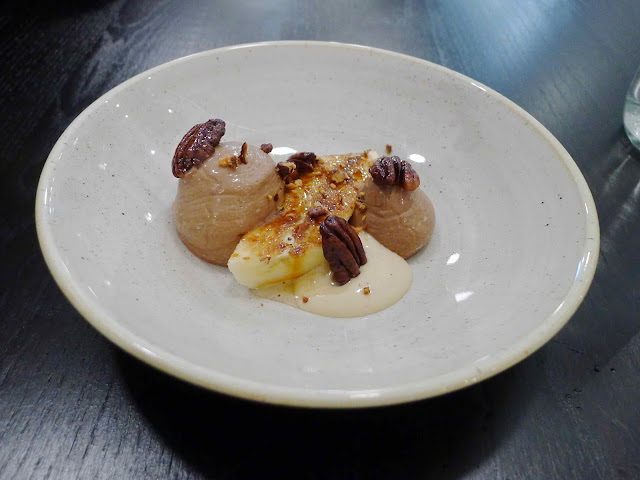 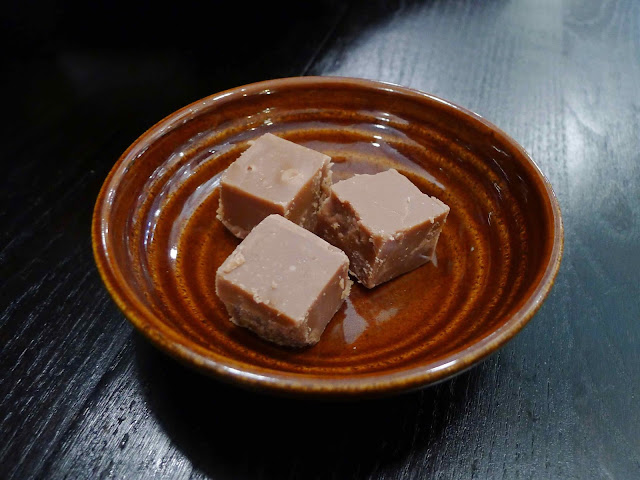 The fish cookery at Cornerstone is excellent and we had a really delicious dinner.

However, I'm still not sure about the small plates thing - the price of a few dishes seemed a bit steep and splitting two plates between three was a faff.