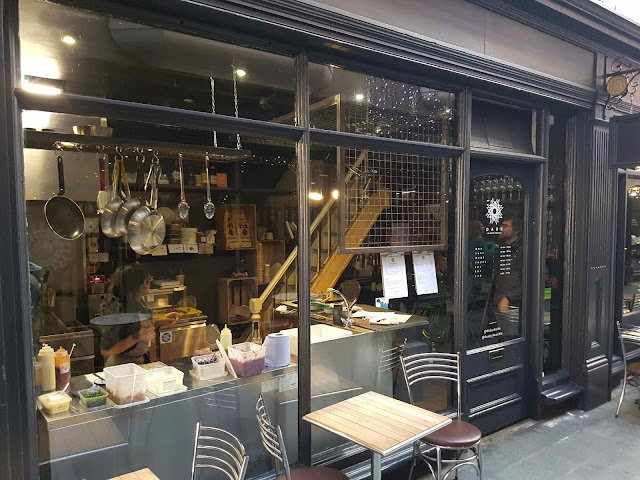 With its graffiti adorned pizza oven and menu of quirky kebabs and lesser used cuts of meat, Cardiff's newest restaurant is clearly influenced by Lee Tiernan’s acclaimed London-based Black Axe Mangal. However, Dark is very much a Dusty Knuckle venture with Phill and Deb Lewis channeling their skills with a pizza oven in an entirely new direction. 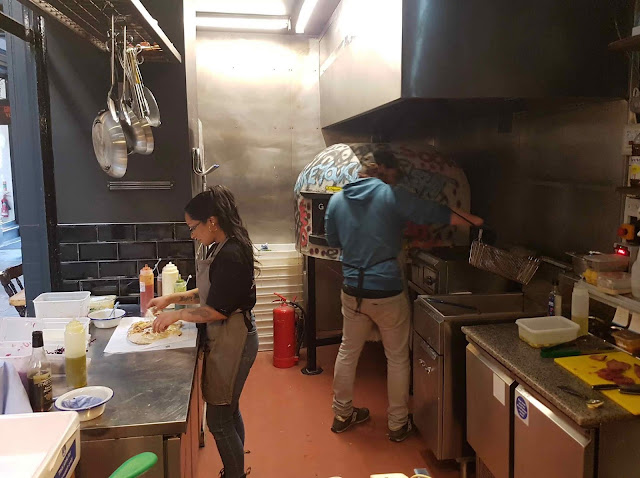 The cosy space, formerly Cafe Minuet, can accommodate around 20 people inside with seating for more outside. But, if you want to grab some nosh to take back to your desk, Dark are still operating the takeaway hatch which was well-known back in Minuet’s days. 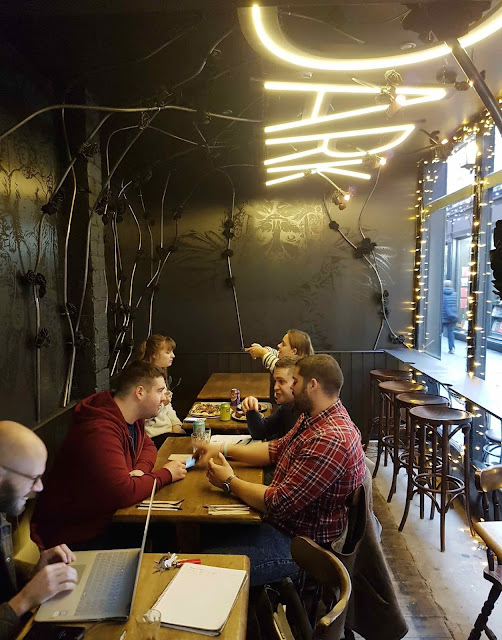 With a focus on nose to tail eating, Dark’s regularly changing menu is divided into kebabs, pizzas and plates. On the day we visited, intriguing sounding dishes included fiery chicken and chilli eggs (£6.50), dark shakshuka (£6.50) and kippers with kimchi butter (£7.50). 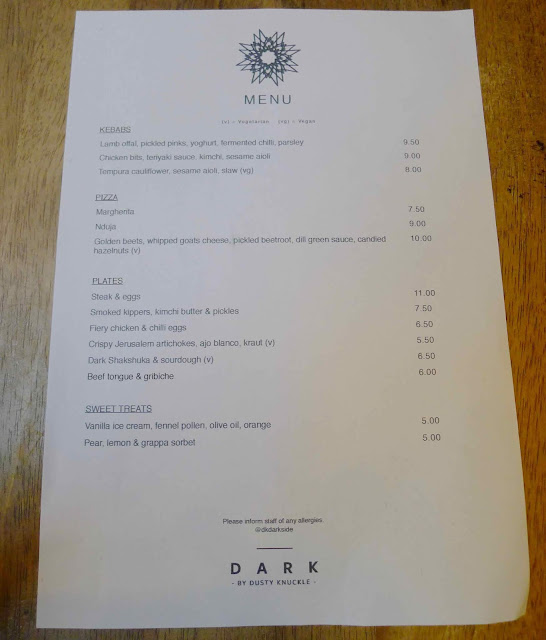 As they’re currently waiting for their alcohol licence, Mrs G and I stuck to the tap water. But, for the time being they’re BYOB if you want to get on the booze.

A couple of cracking small plates kicked off the meal.

Gorgeously tender, buttery and lightly-crisped beef tongue (£6) was accompanied by a sauce gribiche heady with herb and light richness-balancing acidity. Made with egg, mustard, pickled cucumber, capers and green herbs, it’s the first time I’ve had this flavour-packed sauce. 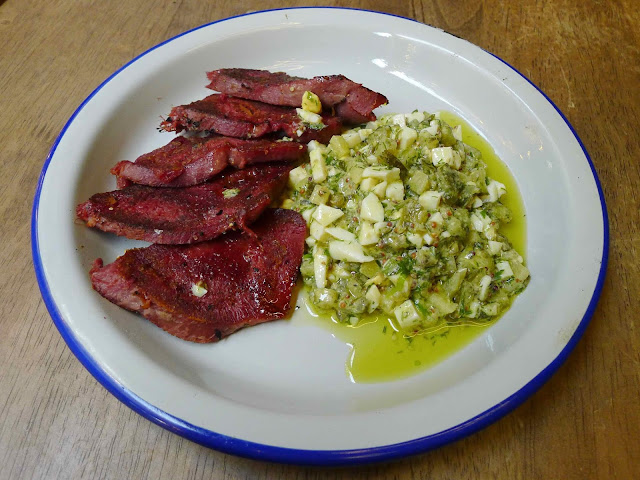 Crispy jerusalem artichokes (£5.50) most certainly delivered on their billing. Brilliantly crisp with a soft, sweet and earthy interior they were joined by a thick, garlicky and nutty ajo blanco sauce and a delicate kraut which harmonised rather than overwhelmed. 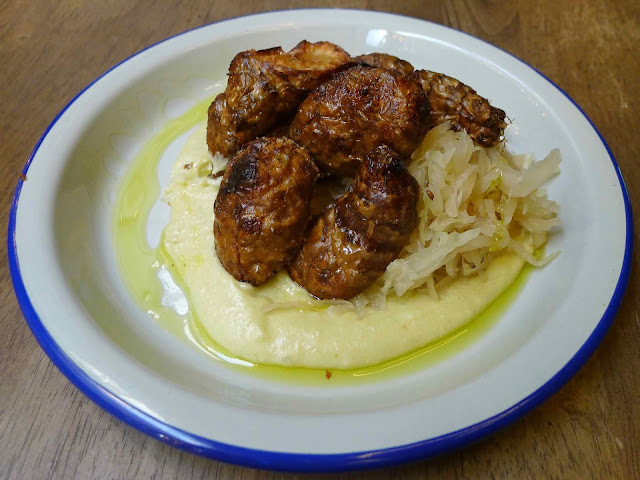 A pair of gargantuan wood-fired kebabs formed the main event. Both flatbreads were enjoyably thin, crisp and airy. In fact, they were so crisp the knives provided weren’t quite up to the task. 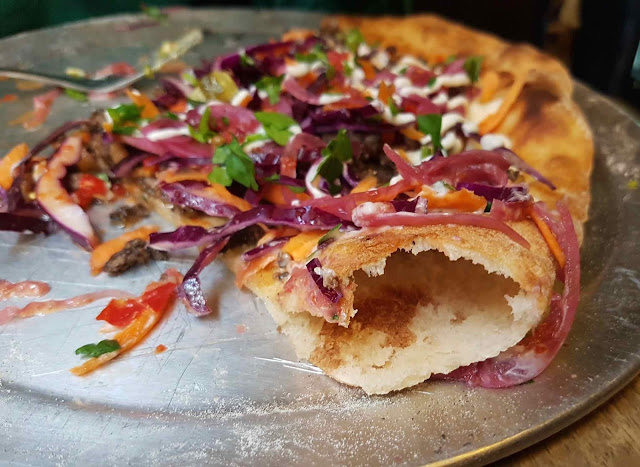 The first kebab was topped with a coarse lamb offal mince (£9.50). It had bags of lamby flavour and only a delicate offal twang so it would be more than suitable for entry-level entrail eaters. It was joined by tangy pink pickled onions, crunchy red cabbage and carrot, creamy yoghurt and chopped parsley. A fermented chilli sauce was lovely but the dish could certainly have taken a bigger punch of chilli. 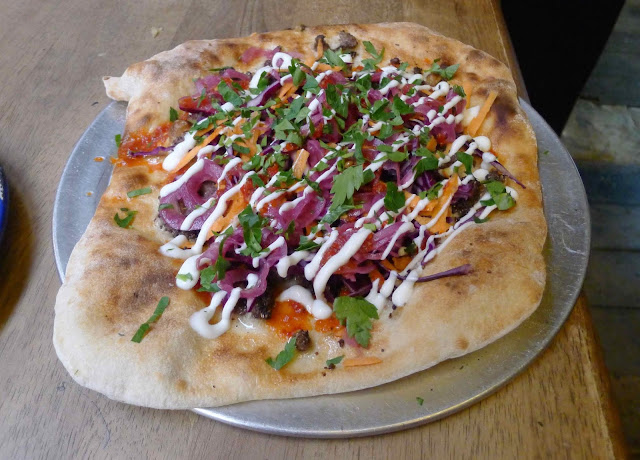 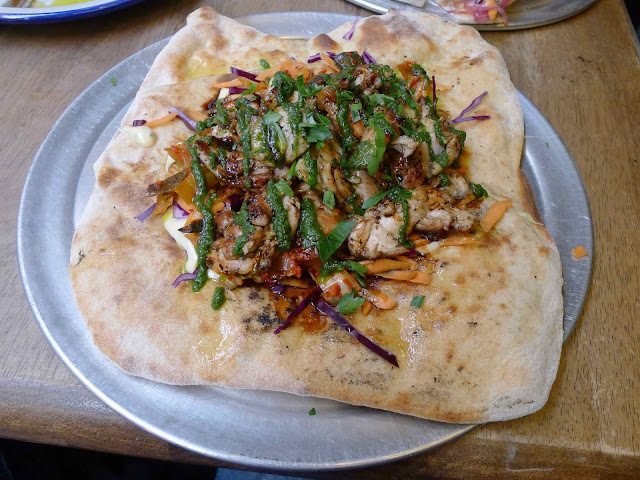 We really enjoyed our lunch at Dark and with a heap of food our bill only came to £30. Dark is a great addition to Cardiff city centre’s independent food scene and I’m looking forward to trying a lot more of their offal-laden cooking.