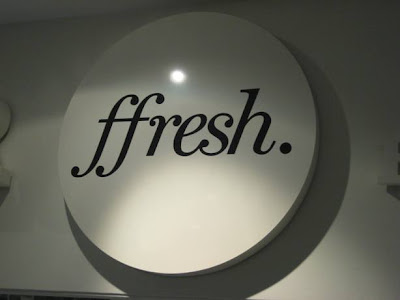 Now that we’ve come to the end of the Great British Menu / Masterchef 2011 season I’m feeling somewhat desolate. The Apprentice has partially healed the pain but it’s a rebound relationship. It’s an idiot that I laugh at for an hour to make me feel better about myself. In contrast, I eagerly anticipate GBM each year and find myself waiting patiently to see which new talent I will have to add to my to eat list (this year it was Paul Ainsworth, last year it was Tom Kerridge). All the way back in 2006 I added Bryn Williams to my list when he represented Wales in GBM whilst still a relative unknown and worked his way to the banquet to cook for the Queens 80th birthday party. I’ve never got round to visiting his restaurant Odette’s in Primrose Hill, London but fortunately last Tuesday night Bryn brought his show on the road to Cardiff for one night only.
Frresh restaurant in the Millennium Centre recently started playing host to a series of guest chef nights. Wales’ best chefs take over the restaurant for a night and cook their food for around 80 guests.  Unfortunately we couldn’t make it to the first event a few months ago featuring Shaun Hill but as soon as I heard tickets for Bryn Williams were on sale I snapped them up. In relative terms these events are very good value if the Bryn Williams night is anything to go by. £45 buys you canapés, 4 courses of food, 5 good (quality and size) glasses of wine and coffee.
Having paid the full whack up front (they were let down by a number of no shows last time even with a £10 deposit) we rather neatly received our tickets in the post a few weeks ago. Getting tickets for a meal out is pretty cool and I think the logical progression of this would be wristbands on arrival at a restaurant and an array of merchandise to buy when you leave (I’d love a Michel Roux Jnr t-shirt or Glynn Purnell pin badge). Anyway, the tickets informed us to get the Millennium Centre for 7:30PM and so we did.
On arrival we were given a very friendly yet slightly amusing briefing explaining the proceedings of the evening. On the basis of this briefing (I wouldn’t have had a clue what to do otherwise), we headed over to get a glass of wine and waited for the canapés to sidle on over to us. These comprised of a simple yet effective piece of melon wrapped in Carmarthen ham and also a salmon roulade. I was gutted to miss out on the 3rd canapé which was a pea and parmesan risotto ball. These looked and sounded the most exciting of the bunch by far. 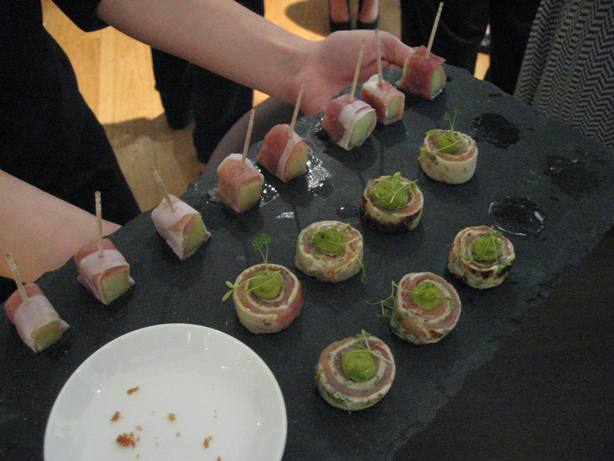 A quick mention must be made about the wine. I’ll mention it up front so I don’t have to pretend that I know what I’m talking about anywhere else. The wines supplied by New Generation Wines were all very quaffable (with description like that I should be a wine critic). My favourite was the dessert wine, a Sélection Chenin Blanc which had a honey like nectar quality to it. I also really enjoyed a Gamme Cépages rosé served with the starter which was remarkably refreshing – the rest of the group found it a little watery. If you want elaborate descriptions of the wine matches then see the picture below.
Once we’d been shown to our table, Bryn made a brief speech. He spoke well, joking that visiting Cardiff wasn’t really a homecoming as he’s from North Wales. On a more serious note he emphasised the importance of taking pride in local Welsh produce. Finally he explained the limitations of serving 80 people simultaneously meant that he would be serving a slightly more pared back interpretation of his food.
Bread. You can often tell how a meal is going to go based on the standard of the bread. This bread was the nuts. Fresh, warm and dense, a simple white roll and a rosemary roll were executed to perfection. 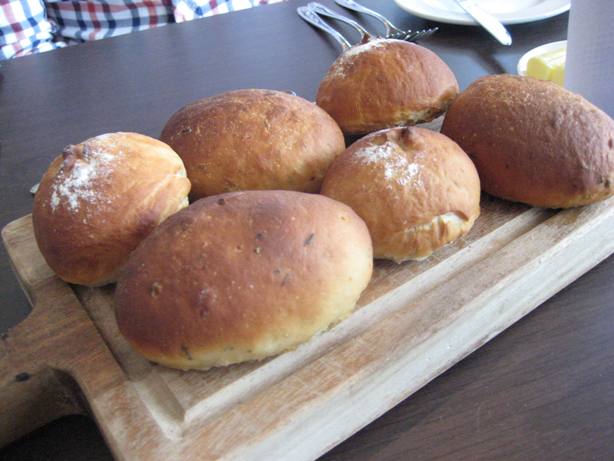 Beef Carpaccio, artichoke & radish salad, horseradish. Onto the starter and this was the standout dish of the evening for me. Melt in the mouth wafer thin slices of beef served with a creamy horseradish sauce with very subtle oomph so that it didn’t overshadow the flavour of the main ingredient. The radish, watercress and raw artichoke (I’ve never had it raw before but it’s a good one) provided added texture and a bit of pepperiness. I could have eaten this 3 times over. 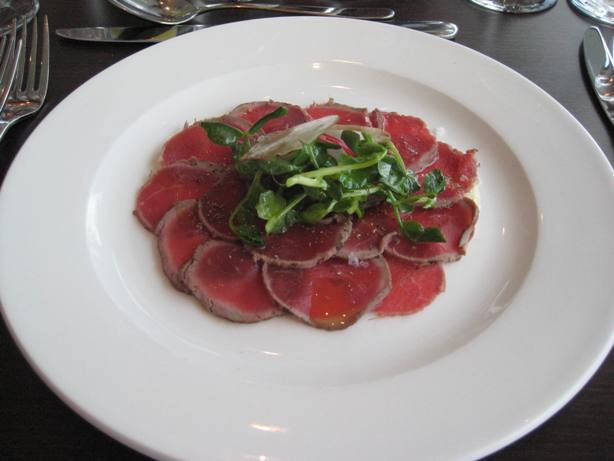 Wild sea trout, wild garlic & asparagus. Perfectly crisp skin and moist fish. Preserved lemon balanced the richness of the buttery sauce. Broad beans, samphire and asparagus were delightfully fresh. The shrimp provided an added dimension but I thought they offered a little too much chew. 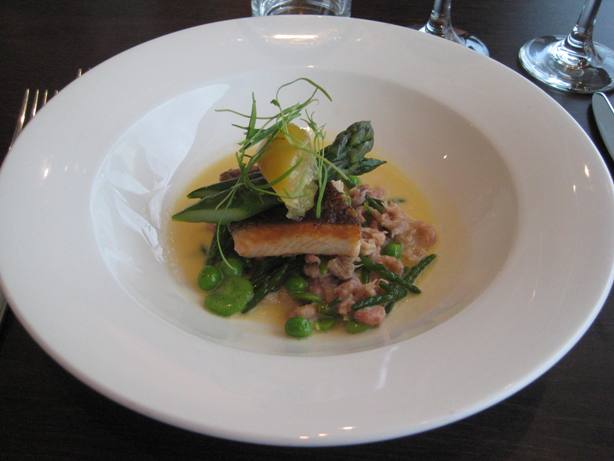 Roast pork belly, ginger & honey carrots, coriander. Wonderfully moist pork, sweet carrots, and a delicious oriental twist from the coriander leaves. However, a little extra sauce wouldn’t have gone a miss and the advertised ginger in the carrots was a bit too subtle. 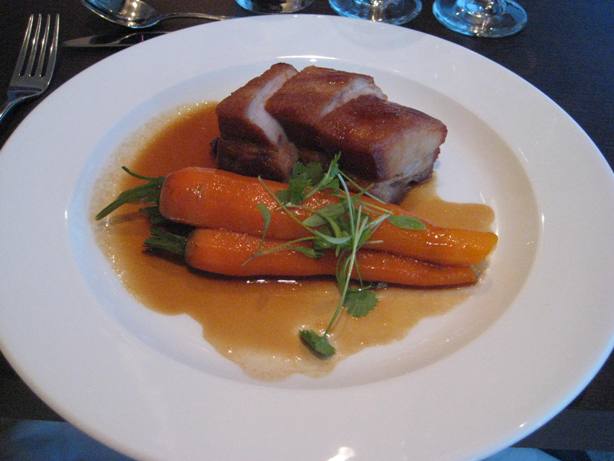 Rice pudding, strawberries and basil. My second favourite dish of the night. It was historic. Perfectly creamy rice pudding. The rice had just the right amount of bite and the fresh, fruity sharpness of the strawberry coulis and fresh strawberries lightened the dish whilst the crisp honeycomb and basil worked perfectly. 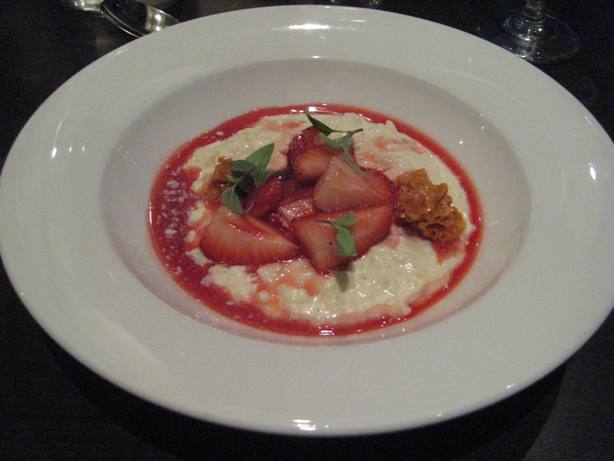 All in all the evening was an absolute cracker. The food and wine were top notch, the atmosphere was laid back and friendly. The next event is on the 29th September and will feature the Michelin starred Bryan Webb from Tyddyn Llan in Denbighshire. It’s sure to sell out quickly like the previous events so if you’re interested I’d get in contact with the Millennium Centre to find out when the tickets are going on sale. Also there’s been talk on Twitter that Bryn might be planning on setting up a pop up restaurant in Cardiff. If he does, I’d recommend a visit.
The Details: Ffresh restaurant, Wales Millennium Centre, Bute Pl, Cardiff CF10 5AL Tel: 029 2063 6465, Web: http://www.wmc.org.uk
Posted by gourmetgorro at 10:58