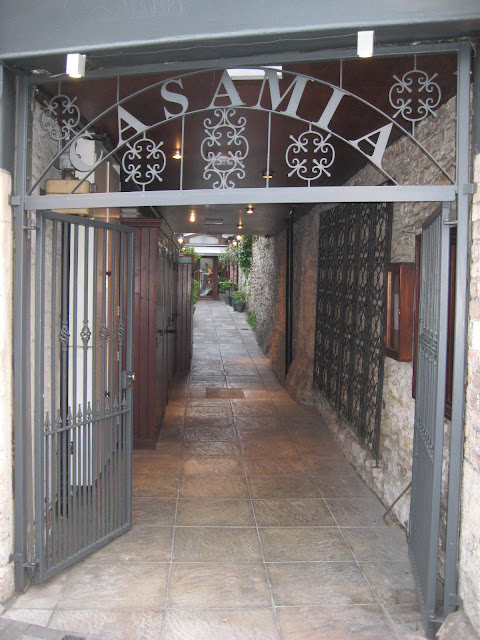 It requires a certain sibling relationship to be able to go into business with your closest of kin and make a success of it. Much as I love my brother I think we’d drive each other crazy within 5 minutes. However, if managed successfully, the closeness, support & even competition that having a brother or sister in the same line of work brings can provide a catalyst for excellence; think the Roux brothers, Gallagher brothers, Neville brothers, Chuckle brothers and lastly the Sanchez-Iglesias brothers.

You’re perhaps wondering who and why the Sanchez-Iglesias brothers are featured in the aforementioned list of illustrious names. It’s because Jonray and Peter Sanchez-Iglesias are the culinary geniuses who own and run Bristol’s multi-award winning, modern Italian restaurant Casamia. Awarded their first Michelin star at the ages of 23 and 25 and winners of Gordon Ramsay’s British restaurant of the year 2010, my birthday meal cooked by the Sanchez-Iglesias brothers last night is the reason why I am once again lamenting the lack of quality high dining options in Cardiff.

Casamia is located in the village of Westbury-on-Trym, just a couple of miles outside the centre of Bristol. Visually, the restaurant has an understated feel which starts from the almost hidden entrance down an alley (our taxi driver had to point out the subtly branded metal gates) and continues to the interior of brick arches, white walls and endearingly quaint pictures of Venice. In fact except for the furniture and sophisticated table settings, Casamia could be any local Italian restaurant. This is explained by the fact that when Casamia first opened, it was run by the family as a traditional Italian restaurant for seven years before Jonray and Peter took the reins with their creative vision of contemporary Italian cuisine.

Whilst the décor of Casamia is understated, the food is the opposite; traditional Italian ingredients with bold flavours are given a creative twist to produce exceptional dishes. The meal last night was one of the finest I have ever eaten and is perhaps second only to Simon Rogan’s L’enclume in terms of creative wizardry.

The dinner menu is restricted to a choice between a 5 course (£45) and 8 course (£68) seasonal tasting menu. As it was a special occasion and we are very greedy there was no question that we were going to opt for the larger of the 2 menus and what with the inclusion of a couple of extra freebie bonus courses and an optional extra cheese course (£10) we calculated that by the end of the evening we had pushed close to the 12 course mark. Mrs G was nearly defeated by the quantity of food. However, I can proudly announce that I wiped clean every single plate clean and finished off quite a lot of the wife’s as well.

Before I move onto the main event I should just mention the friendly and highly competent service. It was interesting to note that almost every dish was served by one of the chefs who cooked it. It’s a rather nice touch having the person who’s cooked your dish with such passion present it and introduce it to you at the table. I’ve never experienced this before and wonder whether this is a trend which began at Noma (I saw it on Masterchef!) which is gradually beginning to spread further afield? Jonray in fact served one of our courses and I was taken aback by how friendly, down to earth and normal he seemed. We had a brief chat about his beloved Manchester United. It was apparent the success of owning and cooking in one of Britain’s best restaurants hasn’t brought an ego to match.

So onto the food and I’ll sum up my review now in case you don’t make it through the marathon of photos. The food being cooked at Casamia by the Sanchez-Iglesias brothers is truly inspired and I urge anyone in Cardiff who is looking to dine out for a special occasion to make the pilgrimage to Bristol. 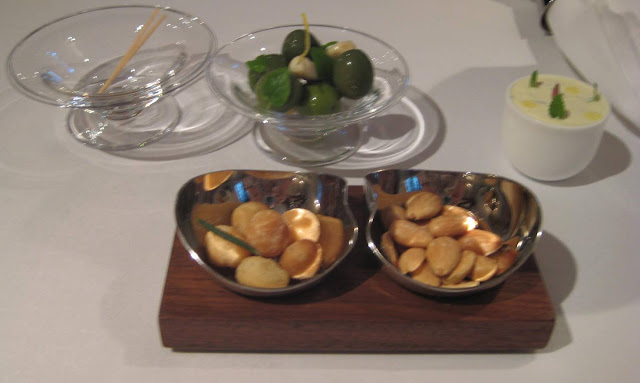 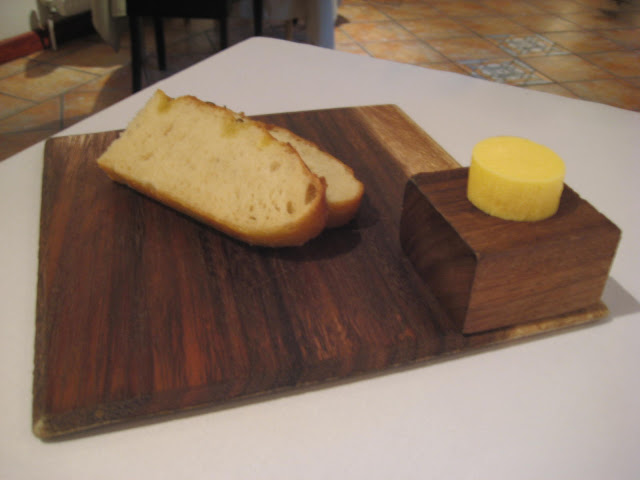 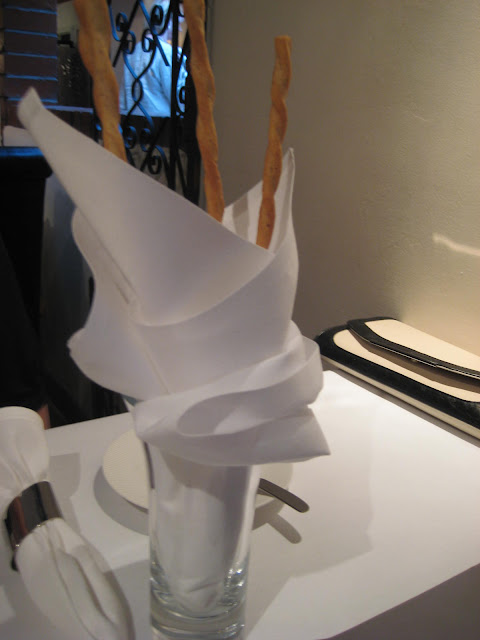 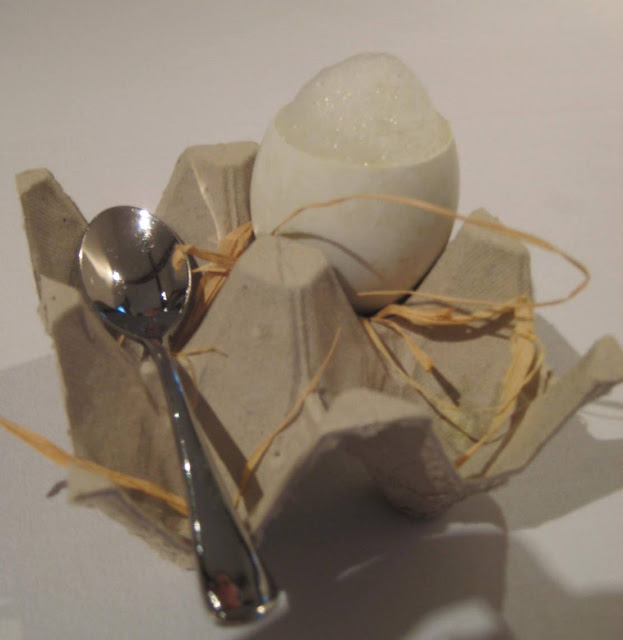 Second Course - Wild boar salami, Sheep's curd, carrots, pesto. A perfect balance of flavours and visually stunning on the plate; the sheep's curd cheese was creamy and packed full of flavour as was the salami, the pesto delivered an intense basil hit, whilst the light leaves and carrot puree softened the dish. 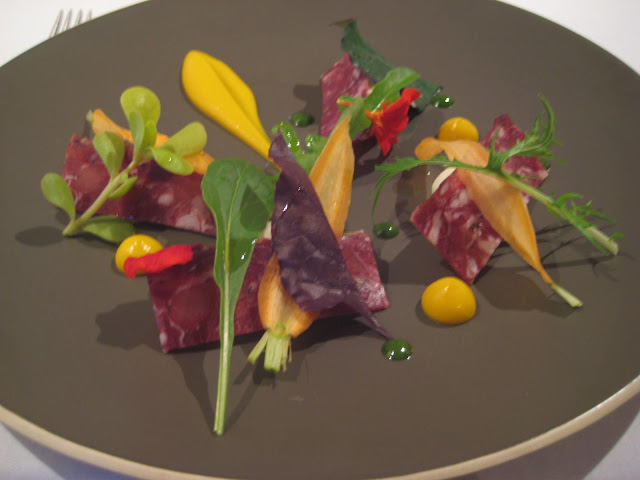 Third Course - Beetroot, barley, iced yoghurt, pickled fennel - Essentially a beetroot risotto but with barley subsituted for rice. The sweetness of the beetroot was well balanced by the yoghurty sorbet. In addition some crunchy barley on top of the dish provided a welcome textural constrast. This was Mrs G's favourite dish. 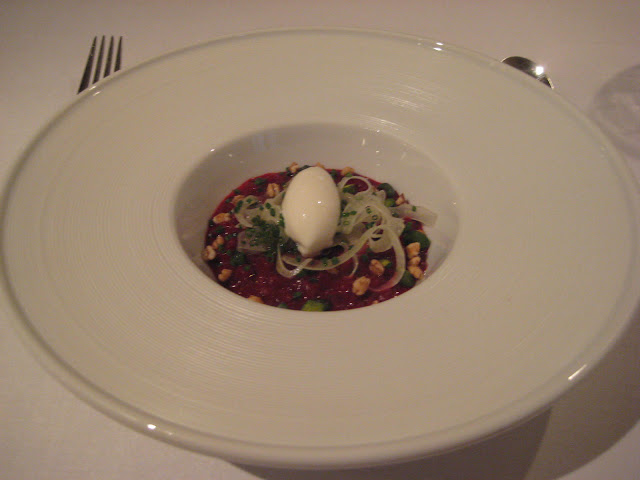 Fourth Course - Salmon poached in olive oil, Italian garnishes, Jekka's herb sauce. I remember this dish from the Ramsay's best restaurant TV programme as some customers were put off by the appearance of the salmon. The sousvide method of cooking the salmon results in it appearing raw even though it is perfectly cooked so that it melts in the mouth. This is one of the most tender pieces of fish I have ever eaten. My only criticism of the dish was that the flavour of the salmon was a little lost behind a lovely creamy fennel sauce and a garnish of caperberries. There were some delighfully crisp pieces of lemon skin sitting on top of the salmon; I could have eaten a whole bag of them. 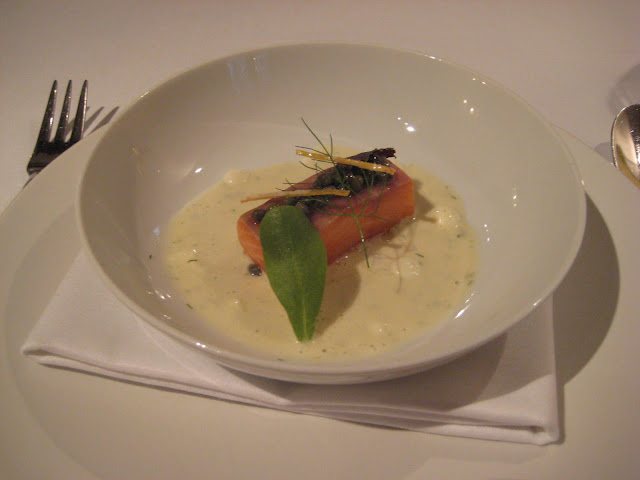 Fifth Course - Iberico pork, mushroom, apple sauce, celery root. There were some big flavours going on in this dish which in the wrong hands could have overpowered the delicacy of this beautiful piece of pork. However, the acidic apple sauce (hiding in a little jar at the top of the screen) cut through the intensity of the white truffle risotto perfecly to bring the taste of the pork to the fore. 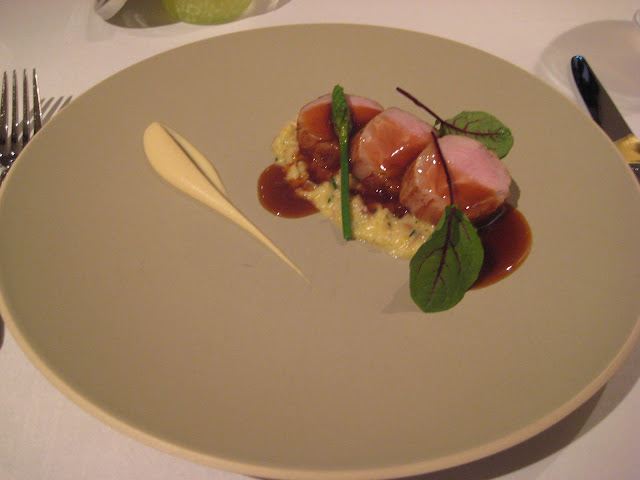 Sixth Course - Cheeses. A lovely selection of local cheeses; a mature brie, a caerphilly, a stilton-esque number and something else. 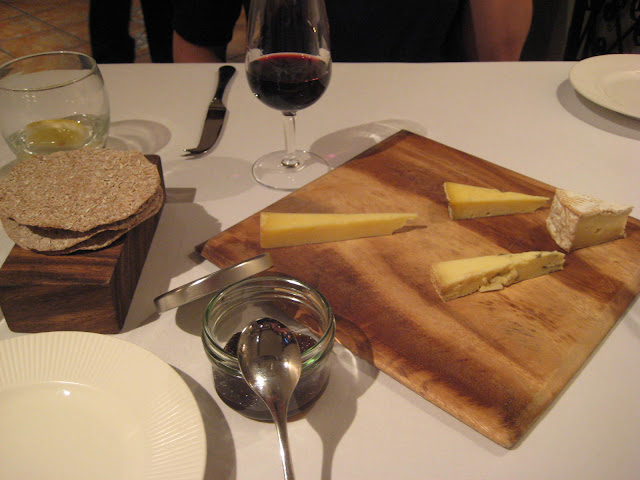 Seventh Course - Cherry sorbet, Aged balsamic (20 years) - A really interesting palate cleanser. The balsamic vinegar tasted like eating a wooden barrel on its own but provided a wonderful earthy, smokiness to the dish. 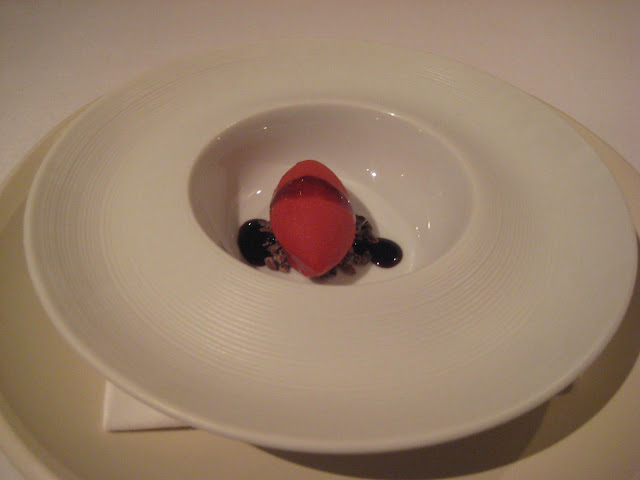 Eighth Course - A salted chocolate mousse with bits of lavender on top. We were brought a complimentary glass of fizz with the dish which was a lovely touch. The mousse was rich and chocolatey with a hint of salt running through it. I am a massive fan of salty, sweet things so this ticked every box. 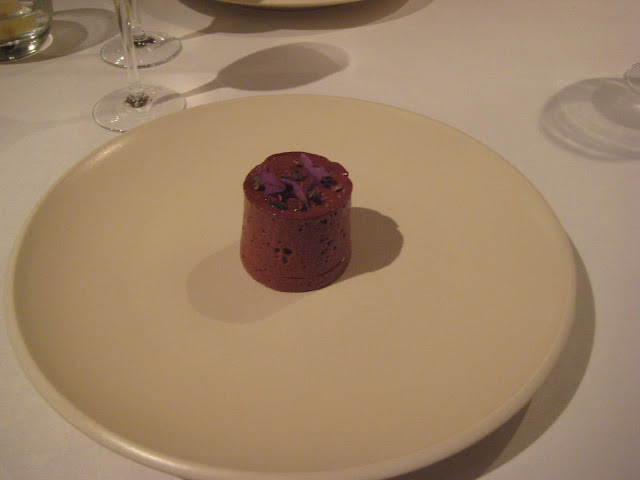 Ninth Course - Pine nut pannacotta, amalfi lemon sorbet, smell of the amalfi coast. This dish was breathtakingly theatrical in its presentation. We were presented with a bowl of lemons over which was poured liquid nitrogen to create a wonderfully fresh aroma. The theatre which preceded the dish was not let down by the dish which followed; a creamy, wobbly, subtly pinenut flavoured panacotta was balanced beautifully by a sharp lemon sorbet. This was my standout dish of the evening. Wow. 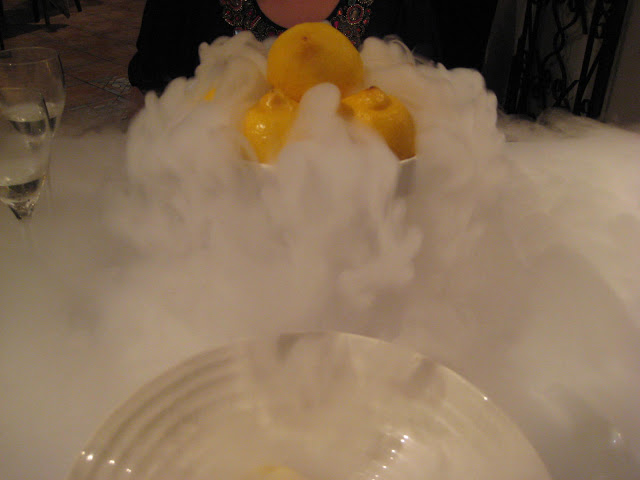 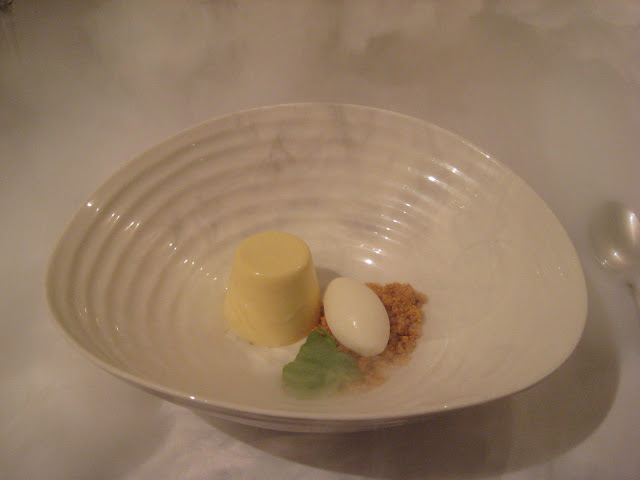 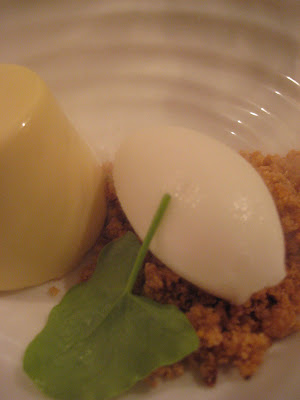 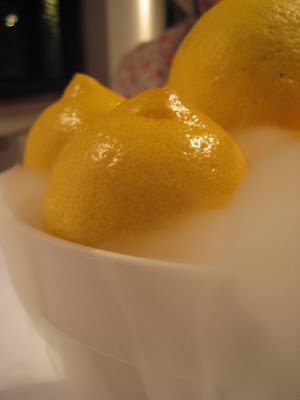 Tenth Course - Traditional Tiramasu (1981) the smell of Renato's Numero Uno. A simple, perfect Tiramisu. A jar of coffee beans with a beautifully intense aroma of coffee was presented with the dish.  A touching message explained why the brothers had decided to include a traditional tiramisu on the menu as it was the dish which inspired their love of Italian cookery. I must admit I've only ever eaten tiramisu with alcohol in it before and the absence of it in this iteration provided a welcome lightness to the dish as we were both getting pretty full by this point. 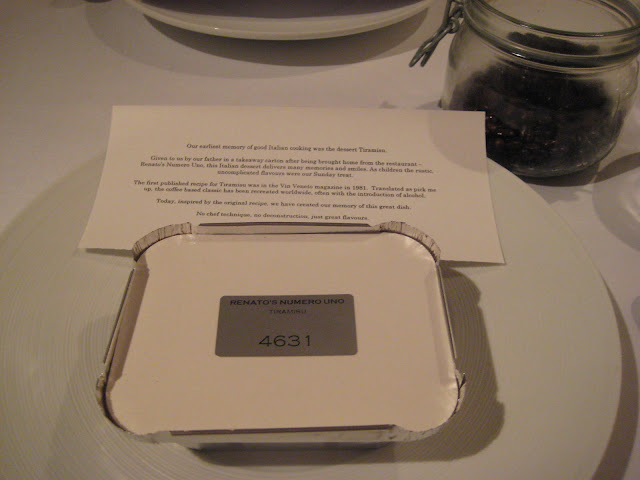 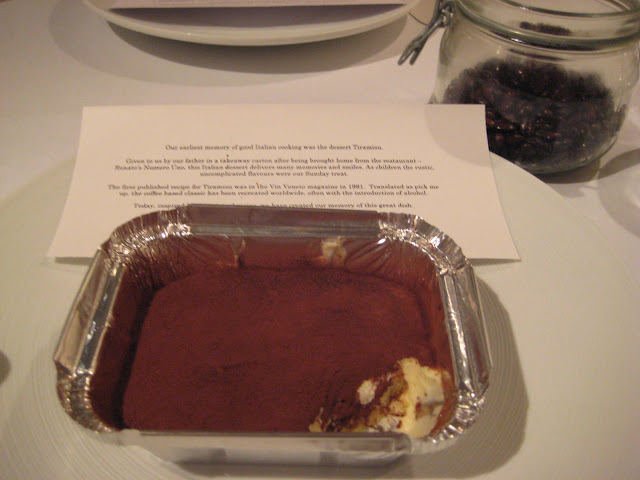 Coffee and Petit Fours - An excellent cup of decaffinated coffee. Specially made chocolates included milk chocolate, banana and passion fruit as well as dark chocolate & juniper berry (I've never tasted juniper berry outside of a gin context and it was deliciously different). A silver dish of the softest, wobbliest rose turkish delight inspired by Narnia was also served. Finally a dehydrated chocolate biscuit was brought out by the chef which we were recommended to consume immediately. This was because the biscuit had been dehydrated in liquid nitrogen and so was still cold and released a puff of smoke from our mouths on consumption. Brilliant fun. 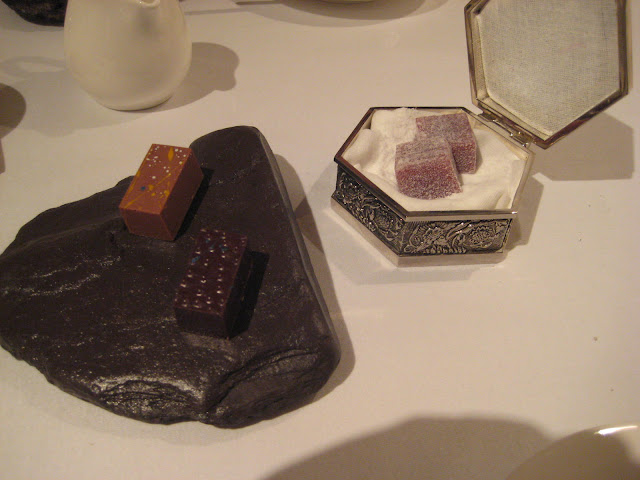 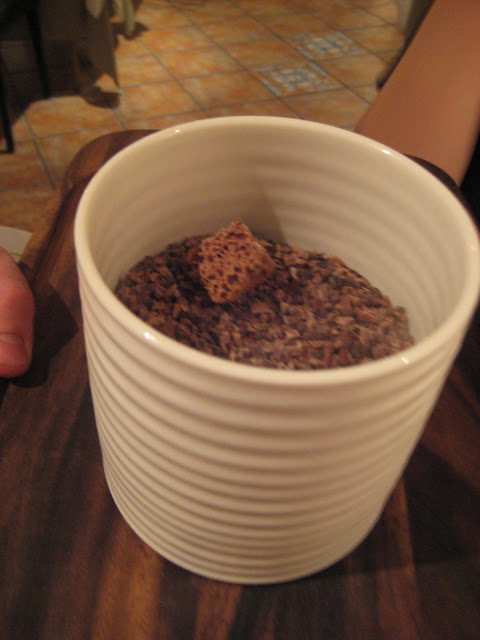 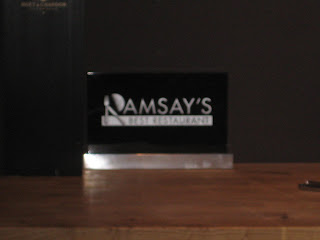