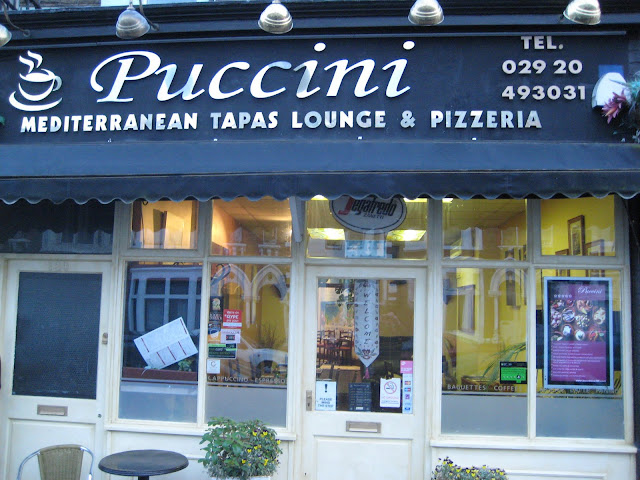 When we got home late from work on Tuesday evening, Mrs G and I couldn’t be arsed to cook. We’re supposed to be saving up for our inevitably expensive summer holiday  to Las Vegas (I’ve already planned about 30 meals to eat in 7 days) and as such we’d resolved to not spend any money on frivolous meals out. Well that resolution lasted for about 48 hours. We decided we’d use our Groupon voucher for Puccini’s as it’s located just round the corner from where we live meaning we could both have a few beers without any need for a Mexican standoff over who’s turn it was to drive.
Puccini’s describes itself as a Mediterranean Tapas Lounge and Pizzeria. What exactly is a Mediterranean Tapas lounge? (If you want to skip my mini diatribe which is about to ensue then please skip to the end of the next paragraph). I learnt a few things during my years in advertising and also coincidentally from last nights biscuit challenge on The Apprentice. If you’re trying to sell something you’ve got to be clear about what your product is and then communicate it clearly to your target audience. Puccini’s fails on both of these counts. Surely with a name like Puccini’s the menu must be dominated by Italian food. Or perhaps the Tapas element of the description means it’s going to be dominated by Spanish food? Wrong. In fact the menu is dominated by Greek / Middle Eastern style mezze and kebabs. There is some pizza and pasta on the menu but it’s towards the back end and it certainly doesn't feel like the focus. Secondly, take a look at the exterior and interior of the restaurant. Granted there is a frescoed back dining room which has a Mediterranean vibe but the front room (where we chose to sit) and the exterior strongly resemble a cafe. Just take a look at the coffee cup logo. 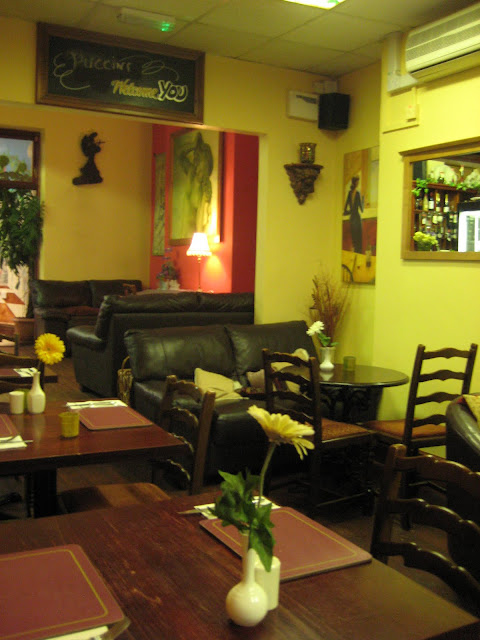 I’m not trying to be critical for the sake of it. I just think Puccini’s could be a hell of a lot more successful if they defined themselves more clearly and communicated this to the general public. If I was the owners I’d probably go down the Middle Eastern route as I get the feeling this is where the heart of the menu lies (we drank Lebanese beer and there’s even a Lebanese pizza on the menu). Equally, I think there’s a gap in the market for this type of restaurant at the Wellfield road end of Albany road. Rant over. I’ll now talk a little bit about the meal as I really should have done in the first place.
Our deal allowed us to order £40 worth of food for the price of £15. We decided we’d opt for tapas (mezze really as I’ve mentioned in my rant) and ordered a large range of dishes to share. Our order was taken promptly and it took about ten minutes for our food to be brought. I should acknowledge the fact the restaurant was pretty quiet and there wasn’t too much prep involved for our meal but I still think this is pretty rapid. However, we did have one gripe with the service. As we were sat round the corner from the bar area we were a little out of sight and mind from the serving staff. This meant we weren’t offered any more drinks during our meal and so eventually I gave up on waiting and wandered over to the bar to order some more. 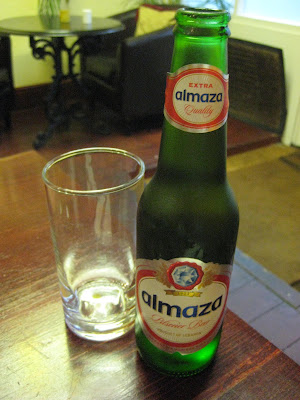 Beer - We drank Lebanese Almaza during the evening. This was a really good beer and I’ll be keeping an eye out for it in future. It’s really light with a good malt taste to it. 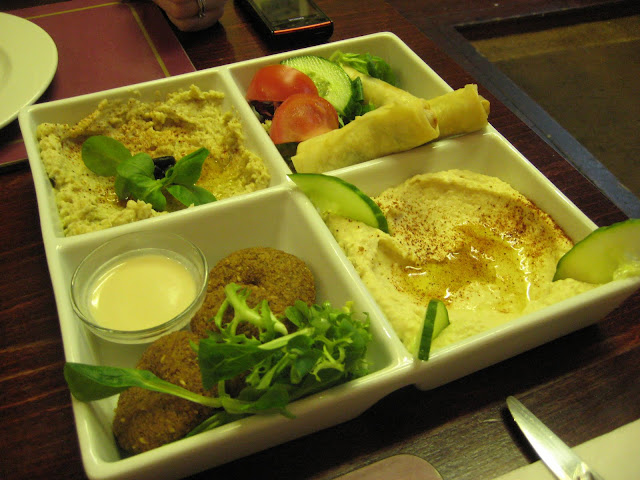 Falafel - Excellent. Perfectly crisp on the outside and soft on the inside. Well seasoned to boot. One of the best falafels I’ve ever eaten.
Hummus - Very good as well. Nice and smooth with a good hit of tahini.
Baba Ghanoush - A smokey hit of aubergine in dip format. A very good example of this dish.
Borek - A real disappointment. I’m used to flaky layers of filo interleaved with spinach and feta. This was more springroll like in texture with a filling which I’m pretty sure consisted of a mixture of melted generic red and yellow grated cheeses. 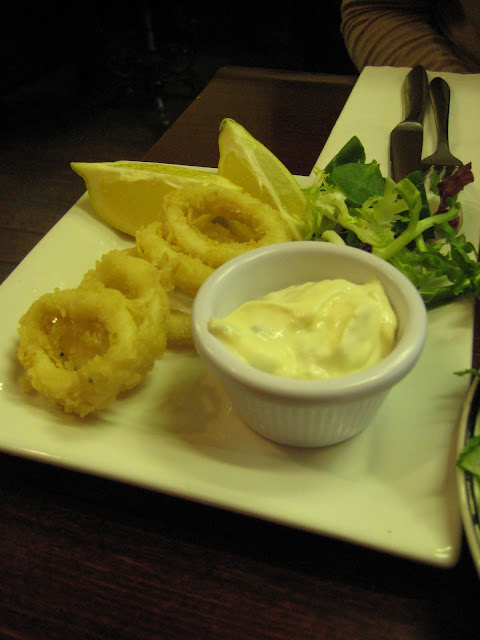 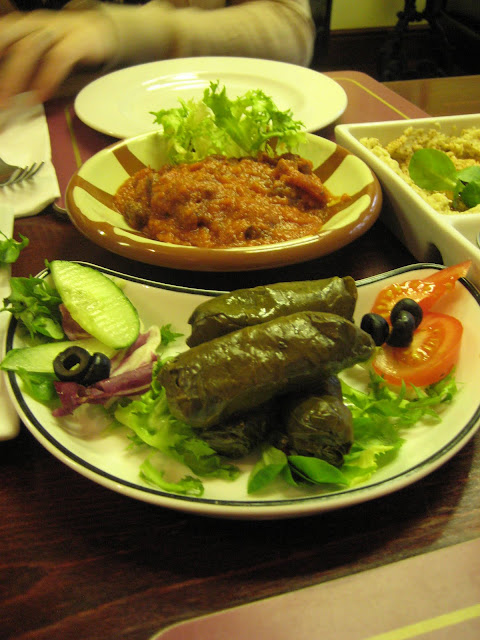 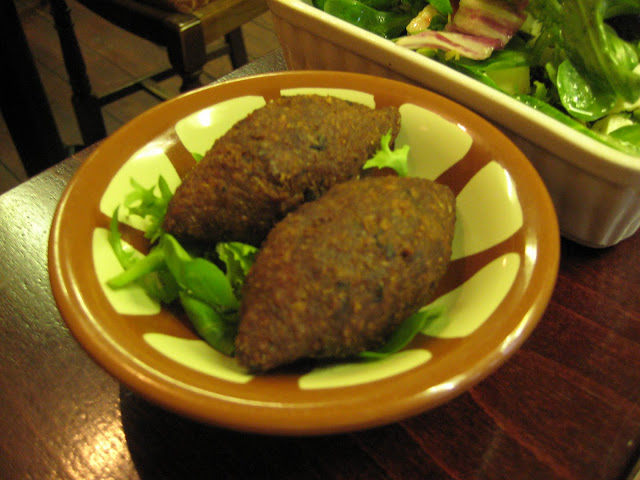 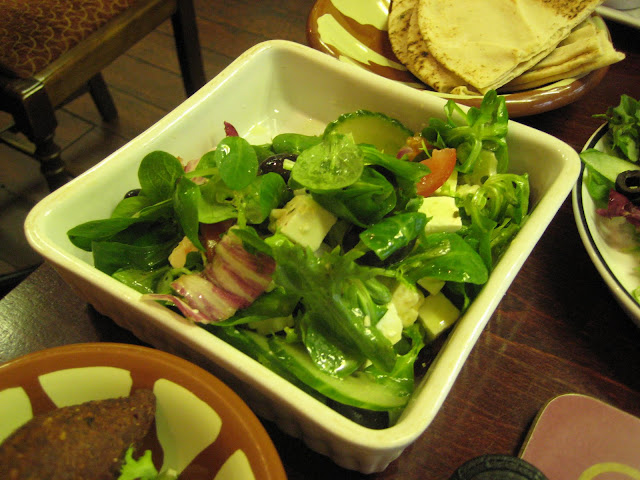 Greek Salad - Well dressed mixed leaves, tomatoes, feta and olives. Firstly I’m not a big fan of leaves in a Greek salad as it rather dilutes the intensity of flavour. This was compounded by the fact the feta and olives were both pretty bland. 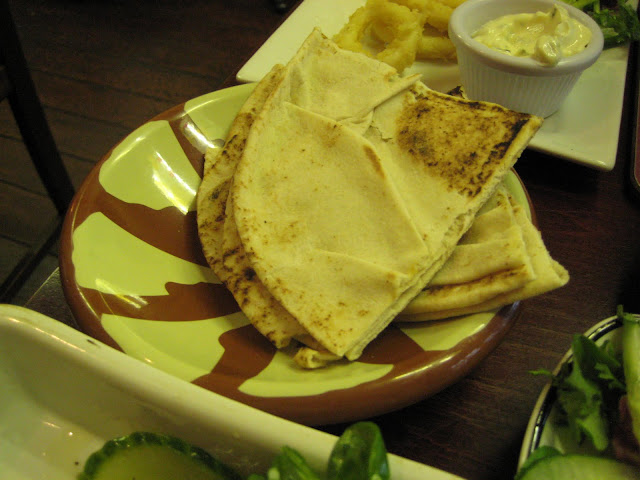 Lebanese flat bread - It came with the Hummus. I prefer it to pitta as it's got a bit more chew and it's lighter.
All in all a real mixed bag. Some of the dishes were executed brilliantly but a couple were really mediocre. I think most of these issues could be ironed out with a little more focus on the quality of some of the ingredients used (olives, feta, chorizo). With the Groupon, our meal was very well priced and Puccini’s offer a regular deal through their website where you can get £30 worth of Tapas for £15. At this price I’d say Puccini’s is probably worth a go. If you do go and opt for the Italian food then please let me know how you get on. On another day I might have been ranting that Puccini’s should define themselves as an Italian restaurant instead of a Middle Eastern restaurant........
The Details: Puccini's, 120 Albany Road, Roath, Cardiff,CF24 3RU, Telephone - 02920 49 30 31 Web - http://www.puccinicardiff.com