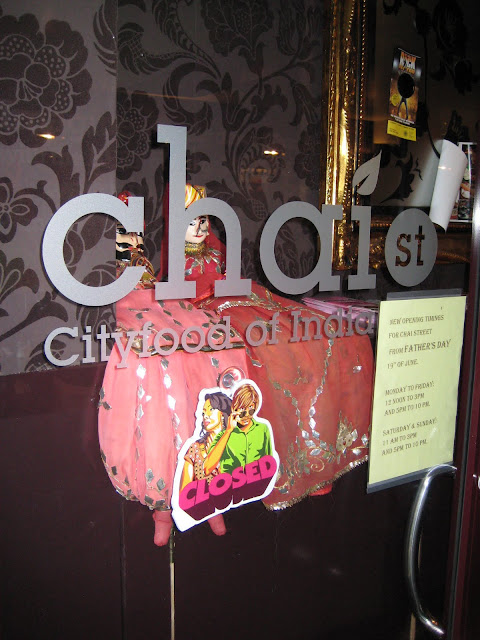 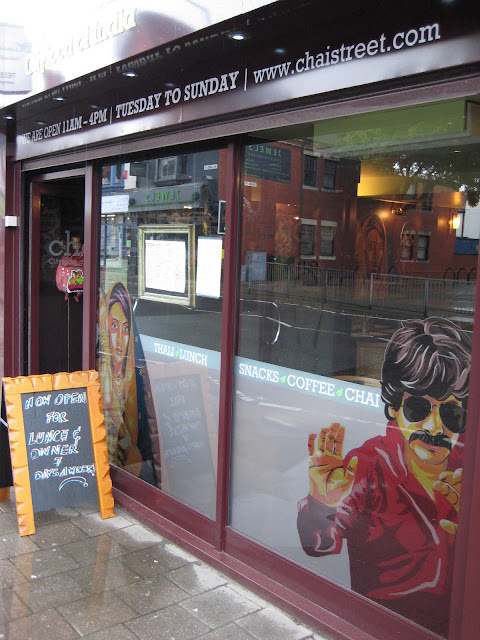 Chai Street is an Indian street food cafe-cum-restaurant located next door to and owned by the highly acclaimed Mint & Mustard. In the last couple of weeks they’ve started opening in the evenings instead of at breakfast and have also revamped their menu. To give the reshuffle a kick start, they’re offering a 2 for 1 deal until the end of August on all main courses. 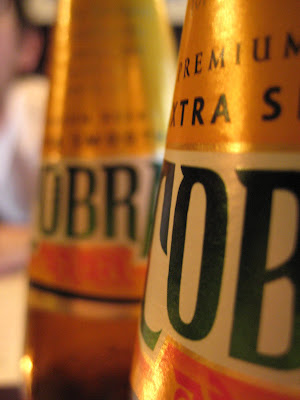 Mrs G and I have been to Chai Street once before at lunch and really enjoyed it.  However we haven’t been back since as curry isn’t normally very high up my lunch time wish list. I typically associate curry with evening meals...... when you’ve got time to unloosen a belt buckle and digest for a couple of hours, when you don’t mind your nose running and your eyes watering or when you’re looking for a place to chill out after a few too many dance moves or a few too many pints. So with the news of Chai Street’s new evening opening hours and the bargainous discount on offer (received by the virtual carrier pigeon that is twitter), Mrs G and I headed off for an early dinner. 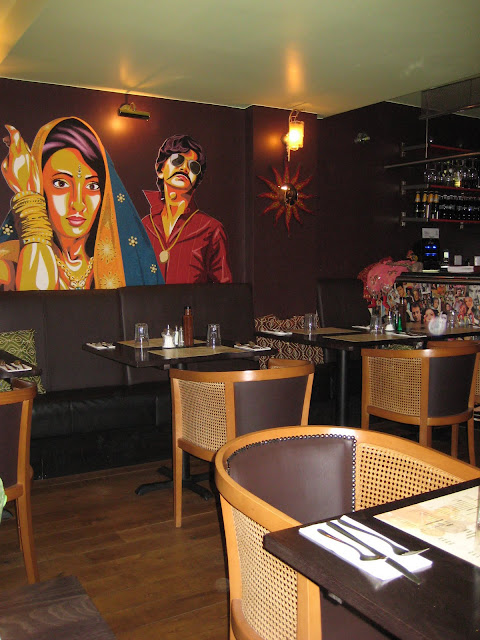 Chai Street is a really laid back, friendly place. Bollywood classics were blasting out the speakers when we arrived (I think the waiter must have been having a sing-a-long) but they were swiftly turned down to a more conversation friendly level. Chai Street also has some really cool branding going on - stylised cartoon pictures of Bollywood actors adorn the walls whilst the bar is festooned with hundreds of small photos of Bollywood actors and actresses. In a similar vein to Wagamama and other informal eateries, Chai Street’s small but well formed menu which offers a handful of starters, a few curries, a smattering of sides and a selection of Thalis, also acts as a placemat on the table.

Based on the menu descriptions, our decision making process was almost instantaneous.  The Grand Thalis sounded massive and also offered a variety of different dishes to try so we both ordered one (a chicken one for me and a lamb one for Mrs G). In addition we both ordered a mango lassi to go with our main; just in case there was too much chilli to deal with and also because it’s always nice to have a pudding to drink whilst eating your main course. 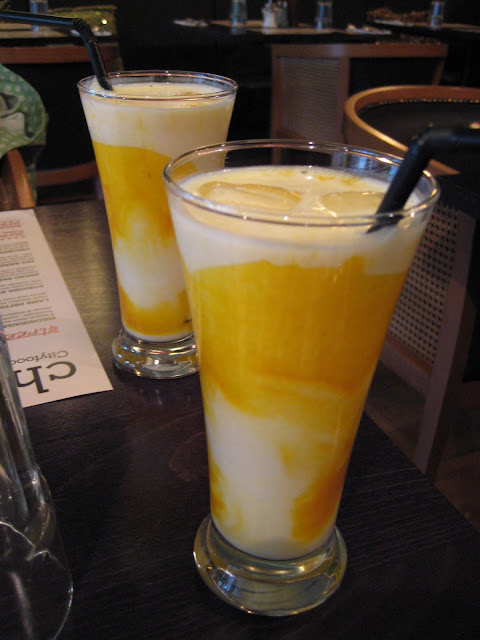 Our Thalis were fantastic. Each comprised of a bowl of curry, a papadum & chutney, curried potatoes, curried cauliflower & green beans, a bean dal, rice, a deep fried snack, Indian salad & a wholewheat chappati. In summary shed loads of food, all for the princely sum of £8.50 (£8.95 for the lamb Thali). However with the 2 for 1 offer thrown into the mix, each Thali cost just £4.50. This is far, far better value than any of the slightly hit and miss Groupon deals we’ve eaten lately. Highlights included the little grease free crisp parcel of pastry filled with veggie stuff, a tangy yet creamy cardamom infused raitha, a fragrant chicken curry packed with the wonderfully smoky flavour of curry leaf (one of my favourite ingredients) and a perfectly soft and subtly spiced potato curry. In fact it was all lush. There was only one minor niggle and that was the lamb in Mrs G’s curry. It wasn’t tough, it just wasn’t melt in the mouth either. It was just ok. The sauce was rather good though.  To quote John Lanchester’s cop out phrase in this week's Guardian it had a “a spicing so complex I couldn't identify one specific dominant note – which is one way of identifying a really good masala.” 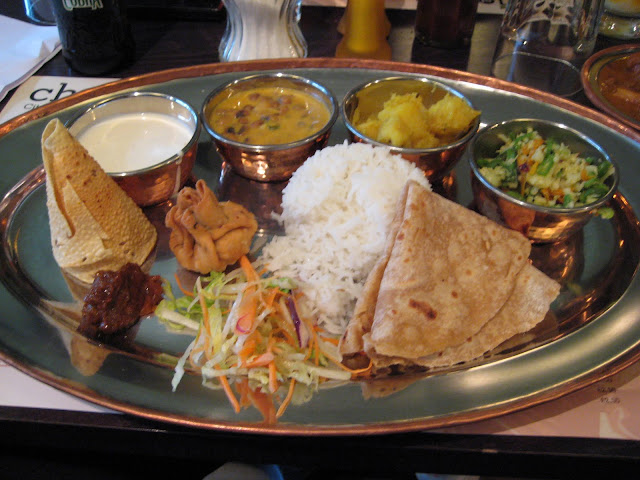 A special mention must go out for the bottle of homemade tamarind sauce which was placed on the table to go with our meal. This unctuously moreish ketchup equivalent, made from tamarind, palm sugar & ginger was more addictive than a boxset of The Wire. I had to resist the urge to slaver it over everything on the table before eating it; that includes the bill and the placemat. 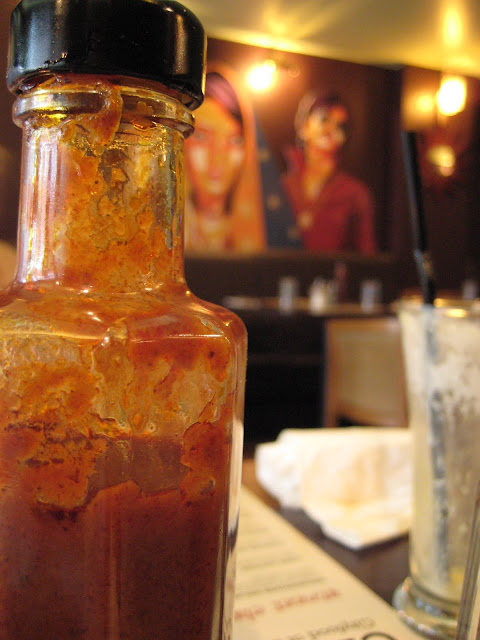 Unbelievably stuffed we decided we would share a dessert rather than have one each; we opted to share a bowl of Gulab jamun. The two balls of soft, syrup infused pillowy goodness were the finest I’ve ever eaten and on a par with those Mrs G ate during her travels in India.

On the basis of the meal that we ate and how ridiculously good value it was, I urge you to get down to Chai Street before the end of August to sample their food whilst their 2 for 1 offer is on. Jai Ho! 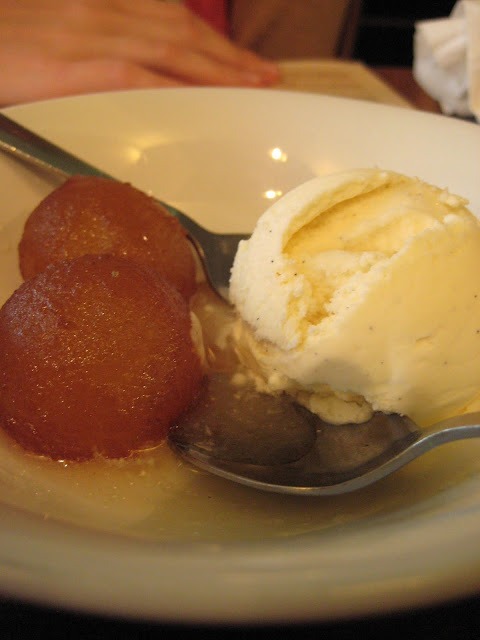