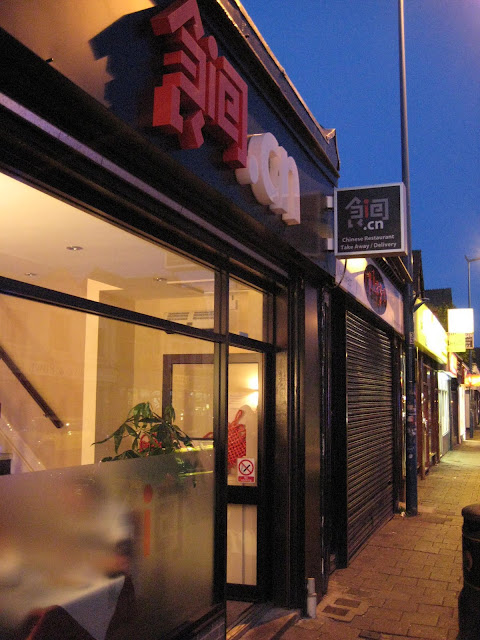 Named after the web address suffix for China, I don’t think there’s much to say about the rather fabulous .CN that hasn’t already been said by Corpulent Capers and Hungry in Cardiff. The food is interesting, generous, authentic and well priced. The restaurant is bright and modern feeling and the service is friendly.

A couple of weekends ago this newly opened Northern Chinese restaurant on City Road played host to the inaugural Tweatup organised by the author of the aforementioned Corpulent Capers, @GomezAdams. It was a great opportunity to meet some people who I exchange tweets with regularly & also to pillage a large proportion of .CN’s interesting looking menu.

The food ranged from the good to the excellent. I didn’t eat a single duff dish and that even extends to the tofu dish I tried (I bear a massive grudge towards tofu for being so flavourless). Highlights included a wonderfully tender yet fiery hot crisp lamb breast with ground chilli (£8.50), a clean yet powerfully spiced Beef in Sichuan pepper & chilli sauce (£8.00) and a crisp and well seasoned salt & pepper squid (£6.80).

Accompanying the bill were segments of orange and some rather familiar looking white rabbit milk candy. It was only when I got home and did some web research that I remembered where I’d seen them before. They were none other than the sweets which had been in the news back in 2008 as part of the Chinese milk scandal for having dangerous levels of melamine in them! I hope they’ve sorted out the melamine problem because they were kinda tasty.

If you haven’t been to .CN yet then I suggest you go. There is no other Chinese restaurant like it in Cardiff. Finally, apologies in advance for my photography but it’s hard to take photos of uneaten dishes when you’re the sixth person out of twelve to get your mits on them. Also I felt like a bit of a wally taking more than one photo of each dish. I normally have to take about ten before I get the desired shot.