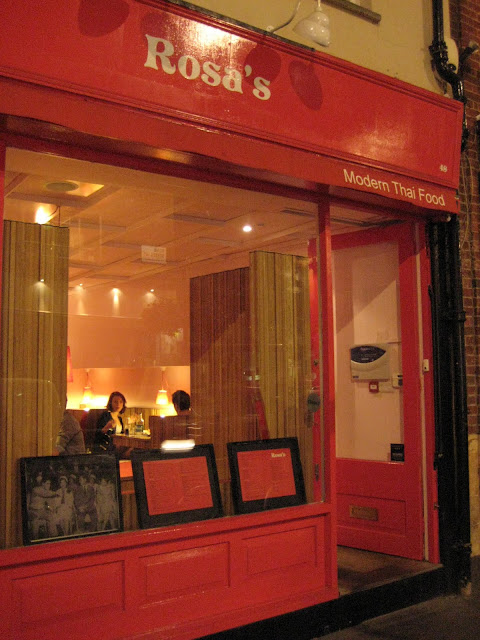 On a recent trip to London, I met up with an old friend who works in the glamorous world of international art. I didn’t quite know what I’d let myself in for when I sat down for dinner with someone who critiques other peoples’ work for a living and asked him for his opinions on food. We’d decided upon Rosa’s Thai restaurant in Soho and having queued for a table for about 10 minutes (there was an hour’s wait for our first choice Dishoom) we were seated at a shared table for 4 in the downstairs restaurant.  Although the downstairs is pretty nice, it’s a little dark and generic in comparison to some of the brighter & more stylish wooden booths found in the upstairs dining room. 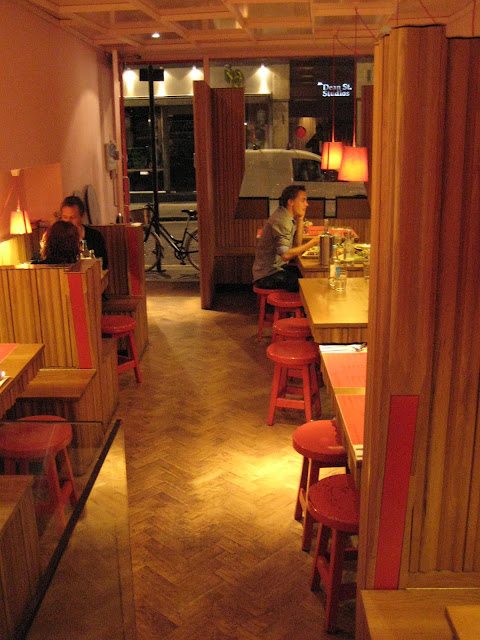 Rosa’s has been recommended to me both by friends and some of my favourite bloggers as a quality & reliable cheap eat in the centre of London. However, as has been happening a lot recently, expectations failed to match reality. This wasn’t helped by the critic sitting opposite me who used a wide range of acerbic language to describe some of the dishes we ate. We ended up with a very hit and miss affair. We ate one very good starter and one pretty poor starter and had the same experience with our mains.
The menu at Rosa’s reads really well with a ton of dishes I’d like to eat. In addition, the pricing is pretty keen and so I can understand why it sits firmly in the cheap eats category (we’re talking London here remember). Service was friendly and efficient and I especially liked the fact that we were brought a bowl of prawn crackers in between starters and mains in order to tide us over as we had a bit of a wait. 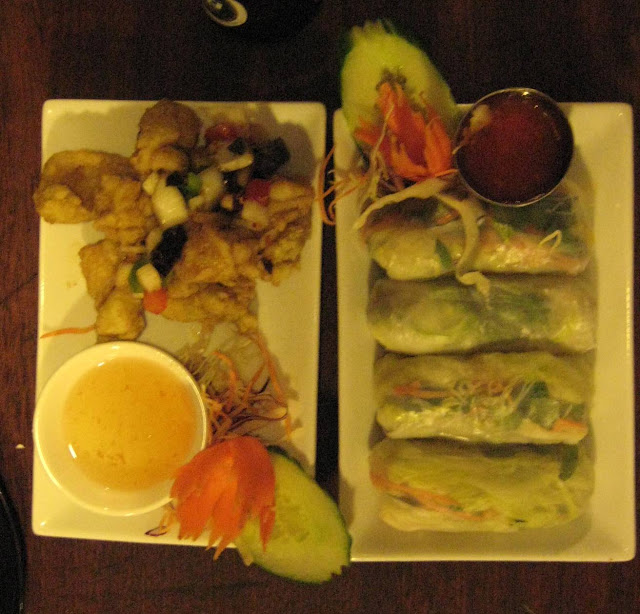 Vegetarian Summer rolls (£5.75) – The winner of the starters. Delicate rice noodle rolls filled with rice vermicelli, Thai Basil, coriander, lettuce and a crispy peanut sauce. They were served with a sweet chilli dip. This is one of my all time favourite dishes and this was a good version. They were light, moreish, fragrant and guilt-free. The critic wasn’t entirely satisfied and had issues with the consistency of the filling. He complained that one mouthful was just lettuce whilst the next was overpowered with coriander and basil. I didn’t have the same problem but that’s probably because I nearly snaffled a whole roll per mouthful. 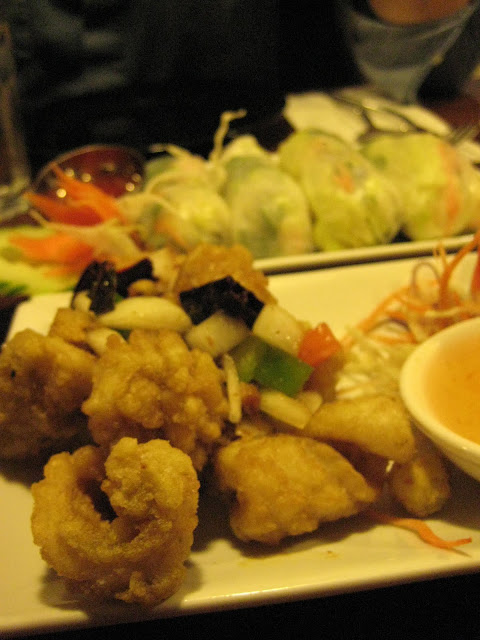 Thai Calamari with plum sauce (£5.75) – Epically disappointing. Although the batter was crisp it yielded a lot of grease with each crunch. In addition the squid had the Chew-factor. The plum dipping sauce it came with worked well. Until we were told what the sauce was, we thought it was some form of citrus fruit with a hint of ginger (perhaps I shouldn’t admit to that). 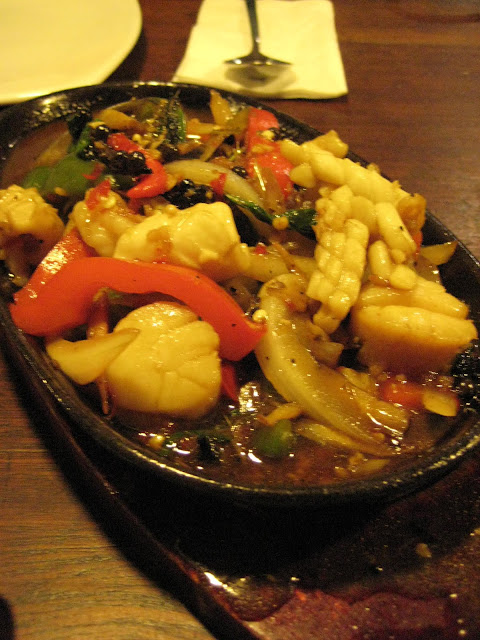 Grilled squid, pan-fried tiger prawns and scallops stir-fried with mixed spices, yellow chilli, black peppers and lesser galangal. (£11.25)  –Again, supremely disappointing. I was drawn to this dish by the variety of different seafood and the interesting flavours in the sauce. What we got was a fairly unattractively presented dish of rather chewy squid, a few bonus chewy green-lipped mussels, some decent king prawns and queen scallops, all served in what can only be described as a really generic stir fry sauce. The predominant flavour was black pepper and none of the other described flavours came through. 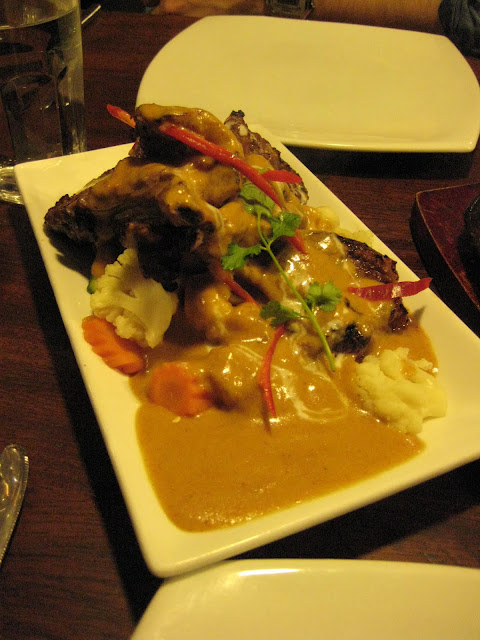 Grilled rack of lamb in a spicy yellow curry.(£11.25)  -  In contrast, this was a real bobby dazzler of a dish. Tender chargrilled lamb chops served in a spicy and fragrant coconut based curry sauce with perfectly cooked pieces of cauliflower and carrot. I’ve never eaten cauliflower and carrot in a Thai curry before and they worked really well.
Having settled the bill, we headed out into the vibrant bustle of Soho in search of Gelato (one of the trends of the 2011 London food scene). We ended up at Gelupo, the rather perfectly branded shop owned by the rather trendy Italian small plate restaurant Bocca di Lupo (small plates are soooo 2010).  I can’t get enough of the wolf & iceberg logo and I also love gelaterias where the gelato is served out of metal lidded urns. 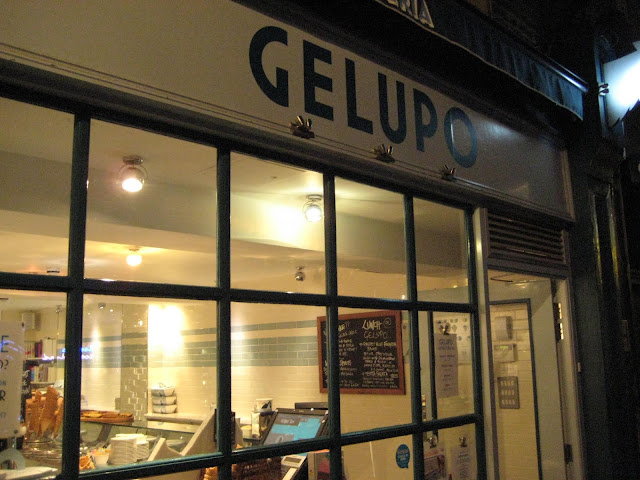 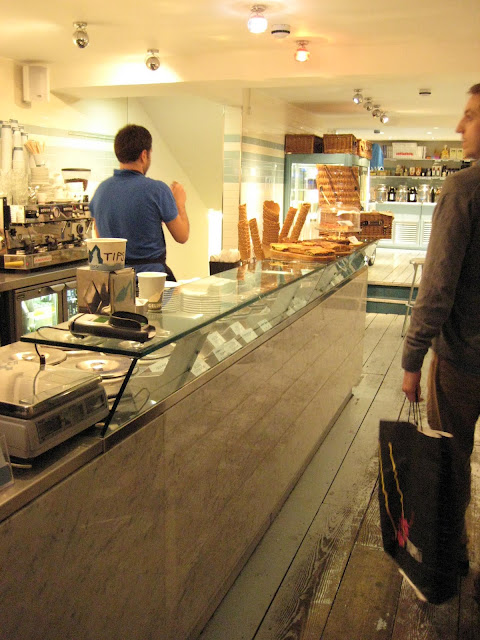 We ordered a 2 scoop cup each (£2.90?). I opted for sour cherry & ricotto along with honey, stracciatella & yoghurt. The critic ordered fresh mint stracciatella & coffee stracciatella. What’s to say other than this gelato rivals some of the best I’ve eaten in Italy. The standout flavours were the sour cherry which had huge chunks of fruit in it and the mint ice cream was like none other I’ve ever tasted. I’ve got a lot of time for toothpaste flavoured mint choc chip but this tasted like the real deal. 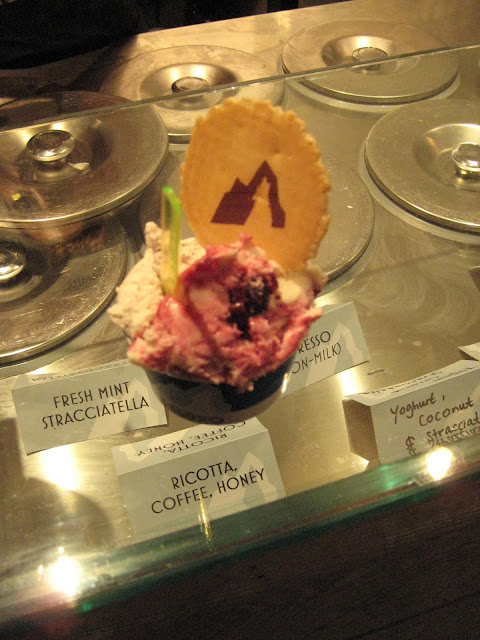 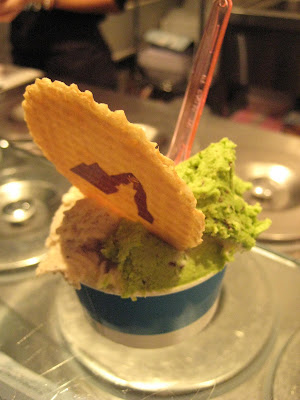 Oh yeah...we also bumped into Matt Lucas and had our photo taken with him.  He was being pestered by umpteen people for his photo, including me, yet graciously waited around to have his photo taken with everyone. What a legend. 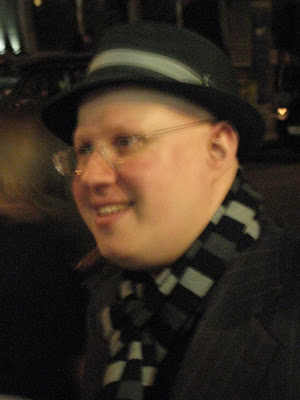