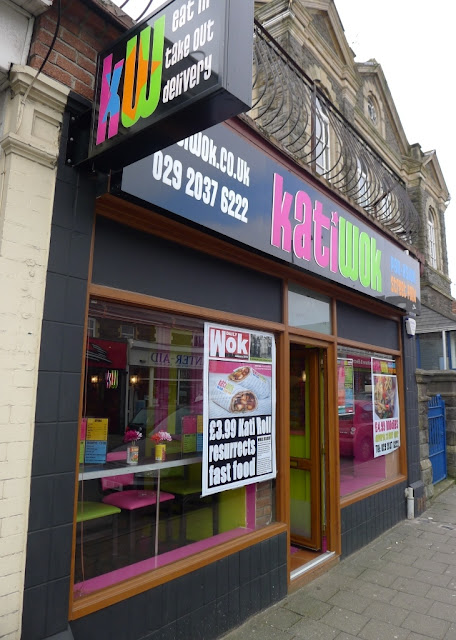 Whilst driving along Crwys Road a couple of weeks ago, the Day-Glo colours and unusual name of a new shop front caught my eye. I didn’t quite catch its name, but a week later a friend recommended a visit to what I realised must be the same place – KatiWok.

KatiWok is a new pan-Asian street food diner and takeaway which specialises in Kati rolls (an Indian street food from Kolkata reminiscent of a kebab roll) and Wok-fried noodles. KatiWok’s vivid exterior closely mirrors the interior’s bubble gum banquettes and kaleidoscopic walls covered with Bollywood magazine clippings. It’s pretty funky, and a little reminiscent of a 50's diner on LSD. 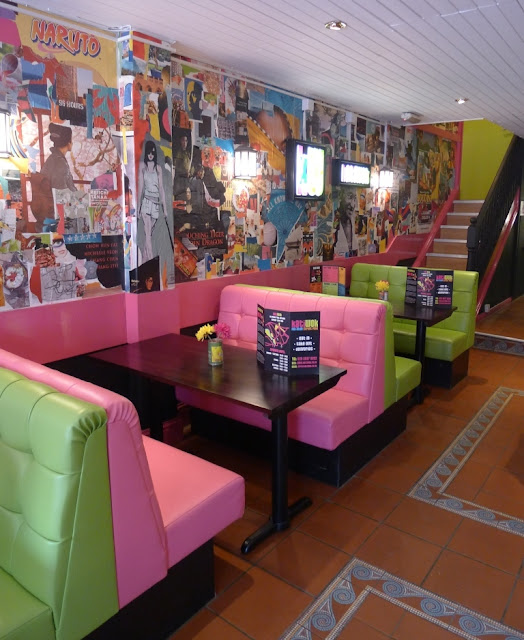 In fact, KatiWok could quite comfortably be categorised as a fast food joint; their menu is brief and keenly priced, orders are placed at a counter, and their food is served in disposable containers. Lastly, and a little irksomely, food is brought out as and when it’s ready. This meant that Mrs G and I’s dishes were served 5 minutes after one friend whilst other members of the group had to twiddle their thumbs for a further 5 minutes. If it wasn’t for my pre-lunch packet of pork crunch from Home Bargains, the holdup would have been torture. 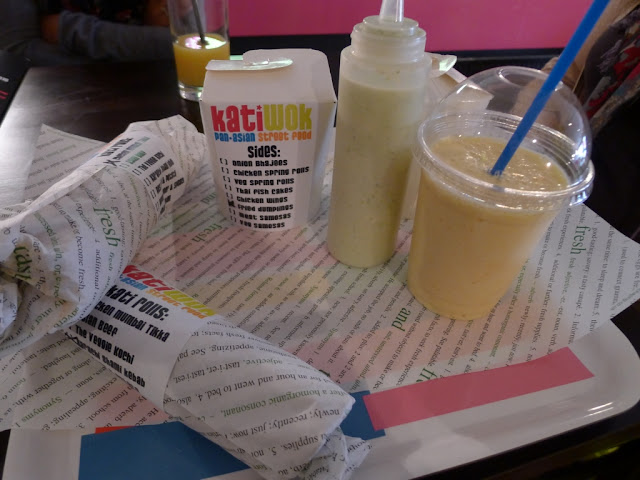 Fortunately, it was worth the wait.

Mrs G and I both ordered meal deals (any kati roll, side or dessert and a soft drink £7.99). To drink I had a diet coke whilst Mrs G upgraded to an excellent mango milkshake for an extra quid.

My side of Nepalese fried dumplings were scrumptious. Four crisp, grease-free dumplings contained a moist minced chicken and onion filling. They were delicious dipped in a squeeze of chilli sauce. 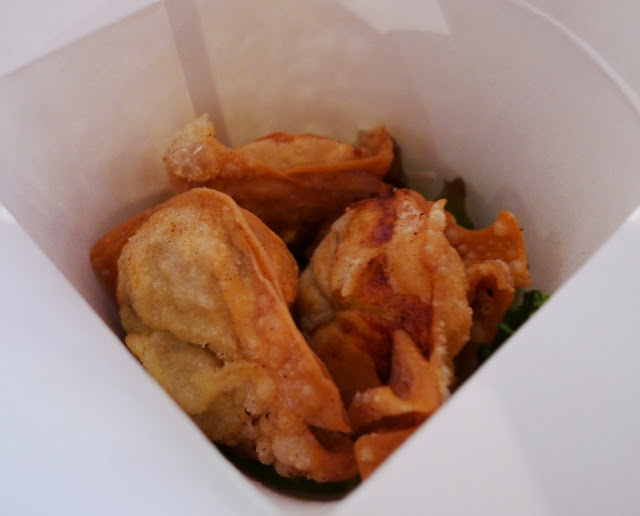 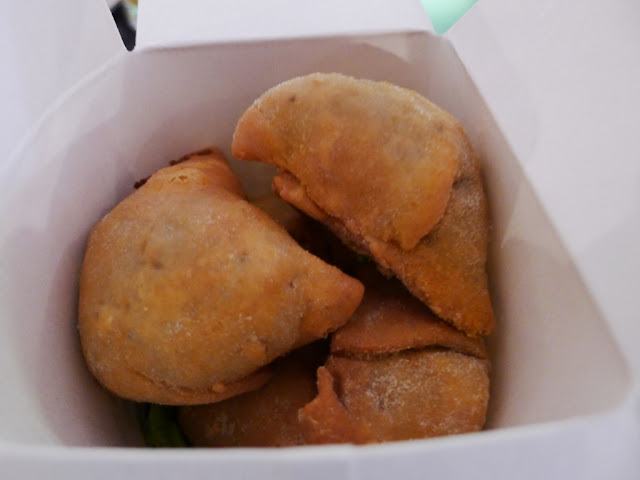 Whilst other members of our group ordered noodle boxes, which were described as enjoyable and ungreasy, for me it was all about the kati rolls.

My Karachi shami kebab consisted of a warm, buttery, layered flatbread filled with spiced minced mutton and lentils. A healthy dose of red onion and coriander added freshness whilst a couple of squeezes of the chilli sauce and mint raitha added further contrast. 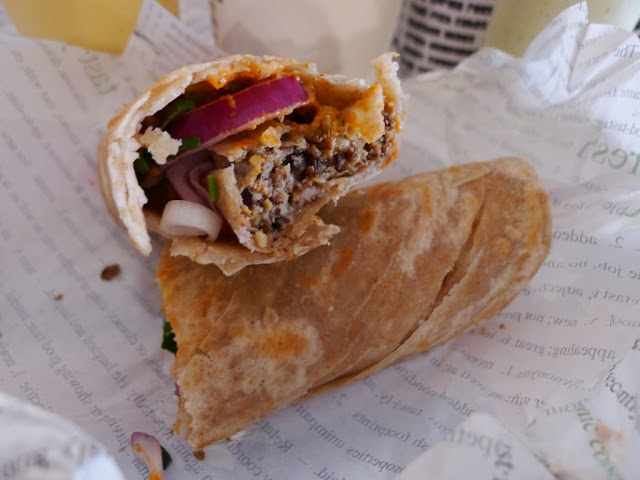 Mrs G’s chicken Mumbai tikka roll was similarly enjoyable, except this time in the place of lamb were mildly spiced strips of tender chicken. 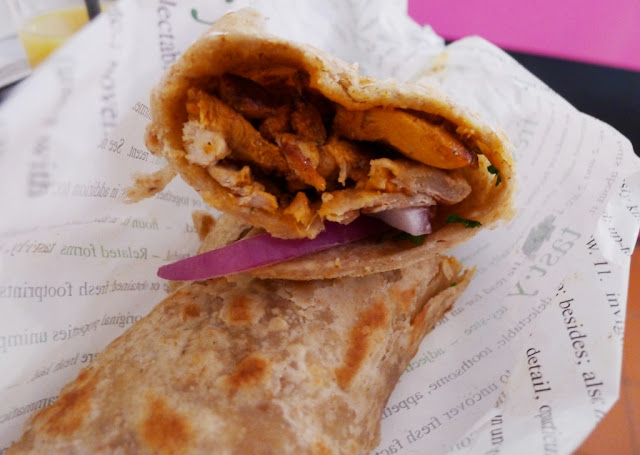 A tasty yet low key dessert of coconut pudding cake (£2 launch offer / normally £2.99) was accompanied by a milky, sweet and aromatic mug of chai tea (£1.50). 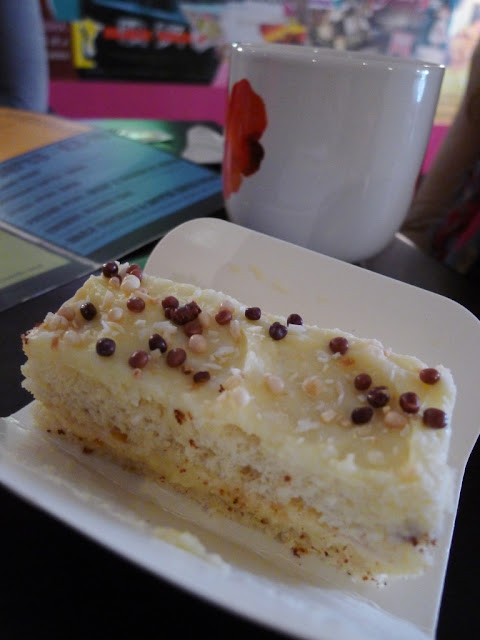 Only a couple of weeks ago I was welcoming a new informal and exotic eatery to Roath. Sorry to sound like a broken record but Kati Wok is also another solid addition to Roath’s dining scene. Hang on, Mrs G has just told me that Crwys Road is actually in Cathays...