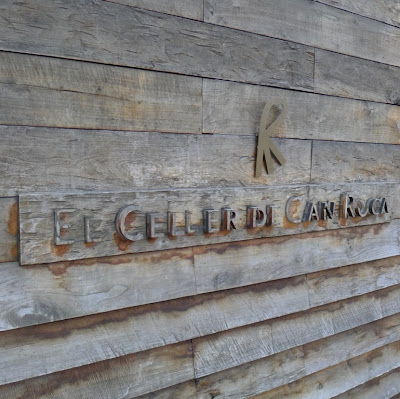 Me: Great news. El Celler de Can Roca has just been named the best restaurant in the world. Less than two weeks until we go!

Sceptical friend: Best restaurant in the world...hmmm...I’ll be the judge of that.

Okay, so the concept of the “best restaurant in the world” is a little ridiculous.

There’s no doubt there are seminal works – The Godfather...Catcher in the Rye...The White Album...Bacon Fries but it’s impossible to get away from the fact that different people have different tastes and opinions are always subject to change.

El Celler de Can Roca in Girona, Spain, is run by the sibling trio of Joan Roca (Head Chef), Jordi Roca (Head Pastry Chef) and Josep Roca (Head Somellier). Serving food which melds molecular gastronomy with classical techniques and Catalonian flavours, El Celler de Can Roca has been a destination restaurant for a lot longer than the couple of months they’ve held the title of “best restaurant in the world”. In fact, we booked over a year in advance to get a seat on a Friday night. And, since winning their recent accolade all reservations in 2013 have been snapped up.

With the most stunning dining space I’ve ever seen, a superb value wine list of biblical proportions and an uber-accomplished serving team, El Celler De Can Roca is an impressive restaurant. 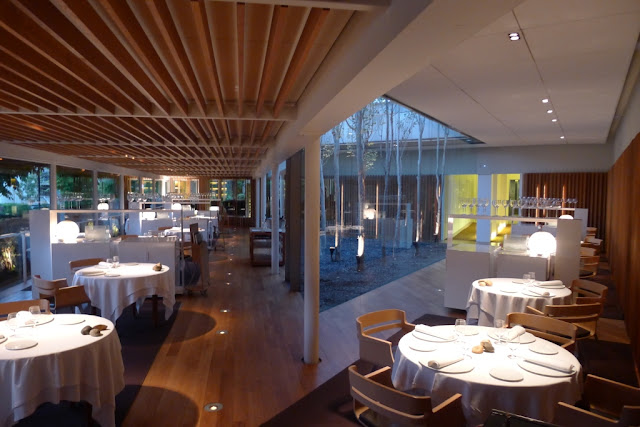 We chose the Tasting of our classics menu with matching wines (55€) and hunkered down for 3 hours of eating and drinking.

A visually impressive start came in the form of a paper globe which opened to reveal 5 canapés reflecting the flavours of different countries. Notable was Mexico – a wobbly cased sphere of guacamole flavoured with tomato seed and coriander, and Morocco – crisp pastry filled with goats yoghurt flavoured with ras el hanout and honey. 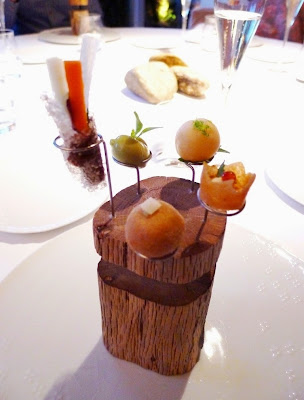 Miniature olive trees were then placed on the table bearing olives coated in a thin layer of anchovy flecked crisp caramel. Salty, sweet and unmistakeably Mediterranean this is a bar snack that could dethrone the pork scratching. 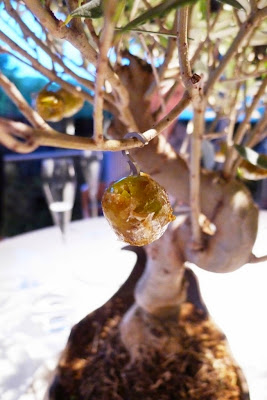 Next up was a super thin shrimp crisp – essentially the ultimate prawn cracker. 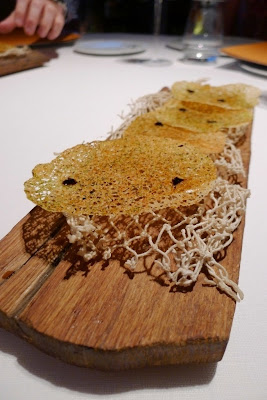 Things got a little bit more classical with the bread – an earthy red wine loaf and a superb olive brioche were my picks. 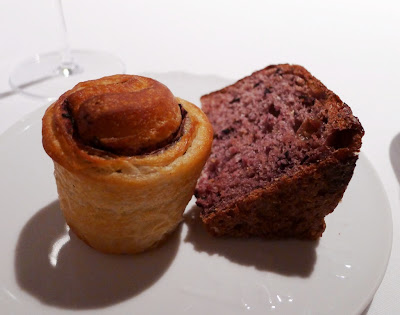 We were then back on the molecular gastronomy bandwagon with four more amuses before we reached the first of the 7 courses listed on our menus. 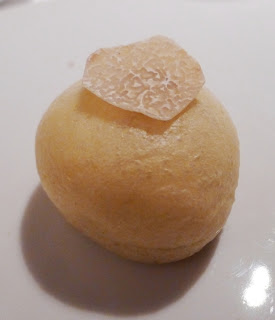 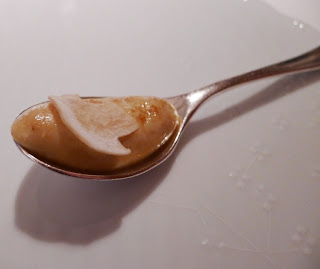 The first dish proper, a timbale of duck liver pate surrounded by caramelised apple and capped with vanilla sauce was the only mediocre thing to pass my lips all evening. Overly sweet and rich, it tasted more like a dessert than a starter. 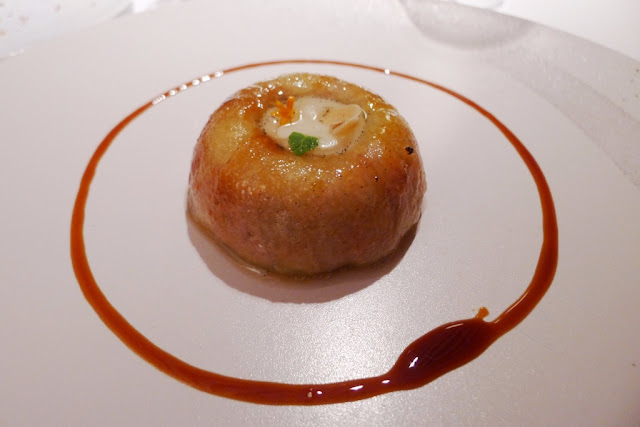 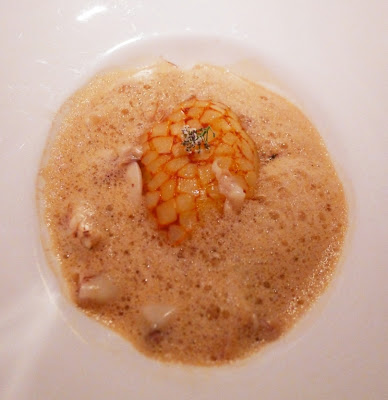 A fillet of sole with a quintet of smears (fennel, bergamot, orange, pine nut and green olive) was the stand out dish of the night. Clean tasting fish was balanced one by one by the distinctly Mediterranean emulsions. On this evidence alone, I suspect there’s a gap in the spreads market for pine nut butter. 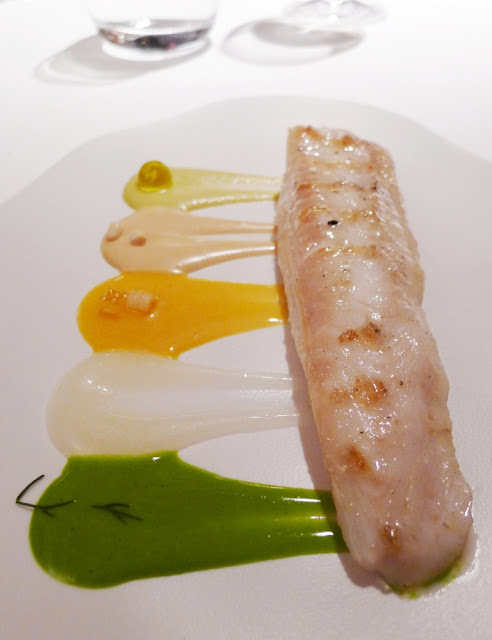 The lightness of the previous fish course contrasted with the intensity of the next. Red mullet stuffed with its liver and served in a potent fish bone broth was served with a trio of fragrant gnocchi of orange, chervil and saffron. 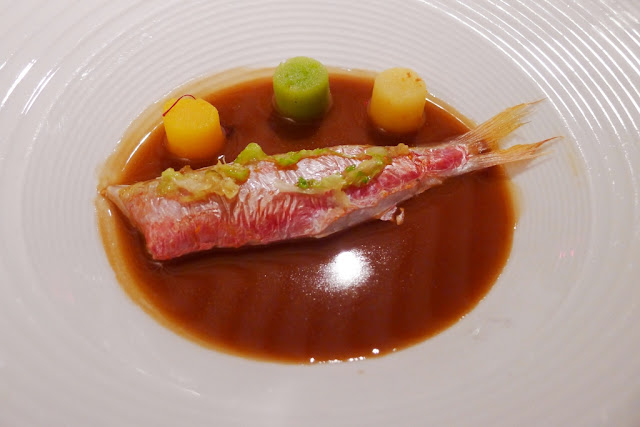 Iberian suckling pig with its unctuous flesh and impossibly wafer thin crackling was a wonder to behold. Refreshing melon pieces countered the richness of the meat wonderfully. 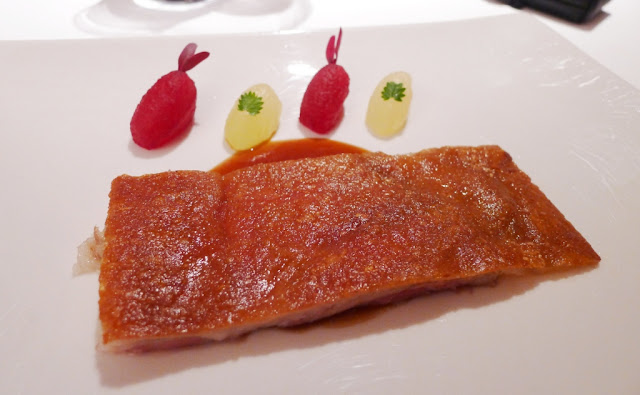 The first of the desserts, bergamot cream, lemon compote and granite, madeleine ice cream and crunchy meringues juggled the fragrance, sweetness and sharpness of citrus fruit. The heady combination was intensified by the accompanying aroma of a specially designed fragrance (available in the gift shop for 50€). 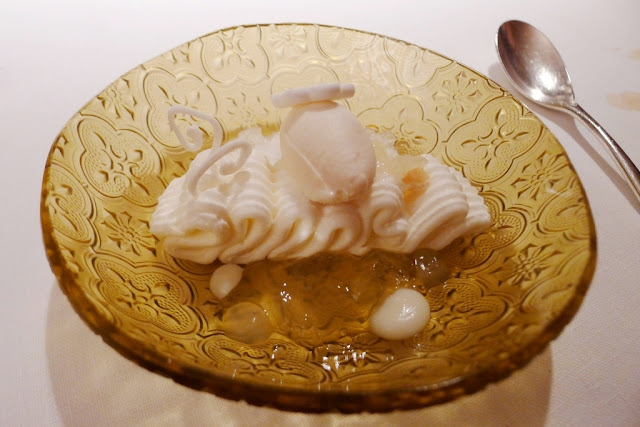 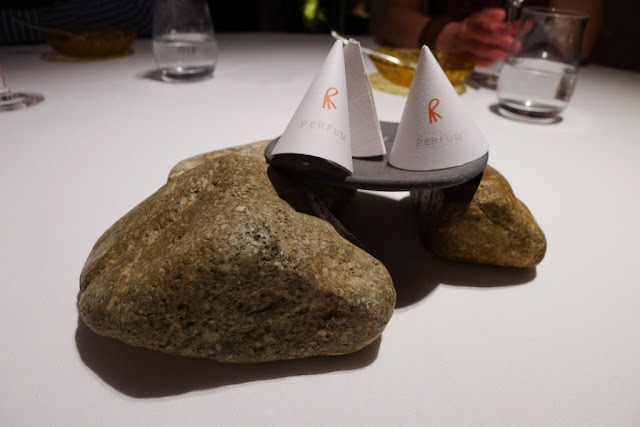 The final pudding was cloudlike in its appearance and lightness. Delicately creamy sheep’s milk ice cream and sheep’s milk foam were joined by tangy guava sorbet and sweet cotton candy. 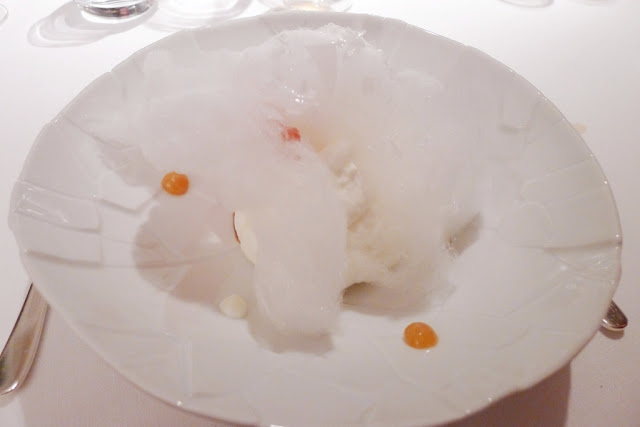 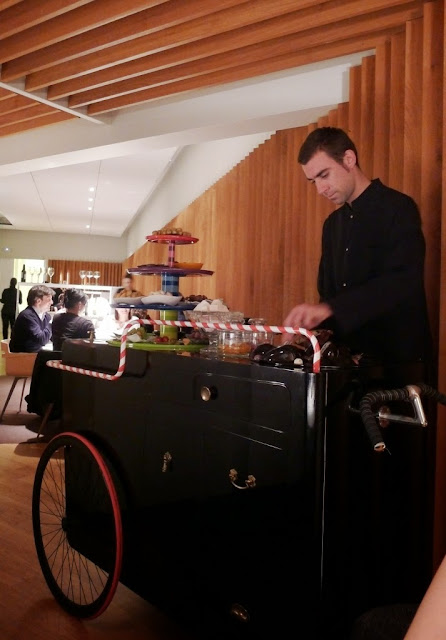 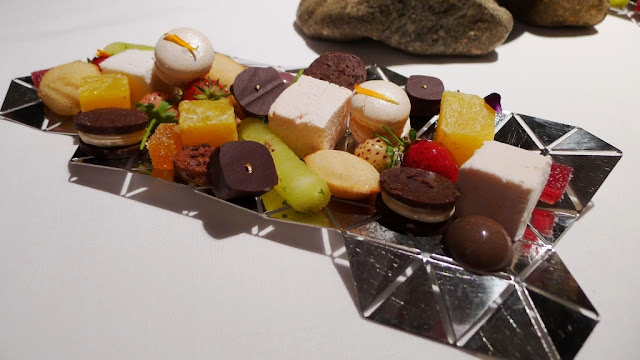 What more is there to say? Almost everything were ate at El Celler de Can Roca was incredible. It’s certainly one of the best meals I’ve ever eaten.

However, I’m not sure it’s the best meal I’ve ever eaten.

Really though, who cares?