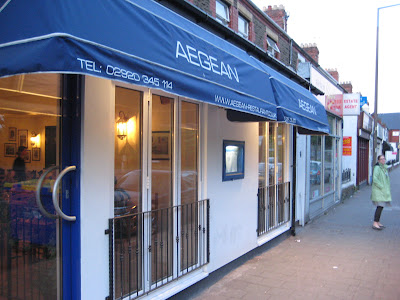 I’ve been a bit click happy on Groupon lately and so have a backlog of vouchers that I need to eat my way through. As it’s the school holidays and I've got some free time on my hands I thought it would be a good excuse to eat out on consecutive nights courtesy of the vouchers slowly becoming lost in my email inbox.

Many of our friends have had some fairly shocking experiences with groupon lately; namely overcrowded restaurants, horrifically slow service and suspiciously small portion sizes. From my perspective this seems to rather defeat the purpose of a restaurant taking part in the scheme, which is presumably to generate repeat custom outside the offer period. Therefore I was feeling a little apprehensive about our selection of supposedly bargain meals out.

First up on our value mystery tour of Cardiff was The Aegean Greek Taverna on Whitchurch Road. Greek food is my 3rd favourite national cuisine (I love playing the rank your favourite national cuisine game). However, the freshness and quality of the cuisine often seems to be lost in transit resulting in some comically bad Greek meals that I've eaten in the UK. On the flipside places like the Real Greek mini-chain of restaurants based in London have in the past provided me with a consistently good souvlaki hit. So how did the food at the Aegean turn out?.....

Starter - Hummus (£3.90) and Borek (£4.50) - Pretty decent hummus, good taste of lemon juice and tahini; less of a chickpea taste than others I've eaten but this isn't a bad thing. The borek were much less successful. Although the filo pastry was crisp and greasless, the cheese in the filling was almost non-existent and the spinach didn't taste particularly fresh. 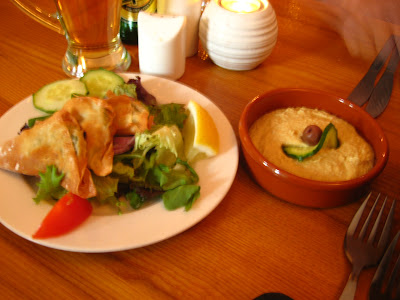 Starter - Grilled Halloumi (£4.50) and Pitta Bread (included with Hummus) - Well cooked halloumi but the portion size was a bit stingy and the side salad was pretty limp and lacked dressing or seasoning. The pitta bread was warm and pillowy with a less chewy texture than other pittas which I've ever eaten. 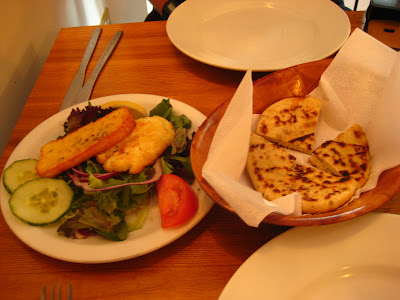 Main - Lamb Souvlaki (House Special) with salad and half and half (for non-welsh readers this refers to half rice and half chips) (£13.20) - Nicely chargrilled pieces of tender lamb with a really good honey and mint marinade. The chips were crisp and fresh but the rice was on the dry side and although the salad was dressed it tasted as though it was from a bottle. 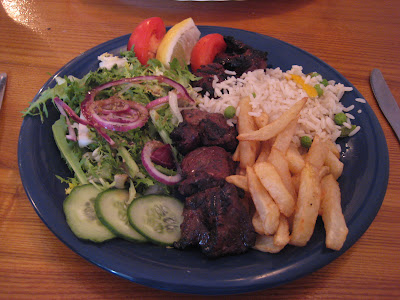 Main - Souvlaki Platter (£11.95) - Mrs G really enjoyed her main. A large portion of tender pieces of chargrilled chicken served with a delicious tzatziki, chips and salad. Rather perculiarly, the salad was dressed with sweet chilli sauce. She quite liked this but I'm not convinced sweet chilli sauce is a specialty of Greece. 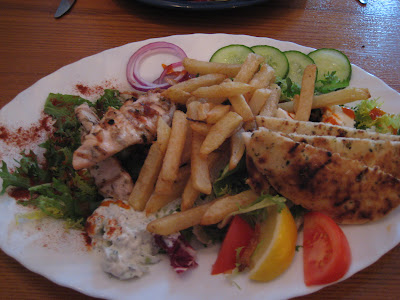 Overall we had a pretty decent meal at The Aegean but I'm undecided as to whether it would warrant a return visit at full price. We paid £14 for £40 worth of food but at full price some of the food is fairly expensive, especially some of the starters when taking into account their portion size. Positives included the service which was incredibly friendly and efficient. In addition some of the food was really enjoyable. If ever there is a midweek special or early bird offer at the Aegean I'll probably return but until then I'll keep on searching for the golden fleece of Cardiff dining experiences (what a bad pun).