The final stop on our gastronomic tour of West Wales was Llandeilo, Carmarthenshire. By now our waist bands were beginning to feel a little tighter and the cravings for salad were beginning to kick in. However, we decided to persevere with our nightly 3 course marathon.
The chocolate box town of Llandeilo is intensively populated by women’s fashion shops and boutiques which sell a range sophisticated nick-nacks for the discerning lady. I can't say trailing my wife round these shops is exactly my idea of fun day out but she judged Llandeilo to be her favourite stop of our West Wales tour. The town also provided an ideal base for trips to the National Botanic Garden near Carmarthen and the rather well fortified Cennen Castle.
For two nights we stayed at Fronlas, an exceedingly stylish bed and breakfast located a couple of minutes walk from the centre of the town. In comparison to our previous hostelries, Fronlas lacked a bit of warmth décor-wise. Stylistically however, I couldn’t fault our room (dau) as the furnishings could have been lifted straight from a magazine and the views of the countryside from our window were impressive. As Fronlas didn’t serve lunch or dinner we were forced to go off piste using tripadvisor as a dowsing rod for where might serve edible cuisine.
Our first choice was The Cawdor Hotel located in the heart of the village. From what I had gathered on Tripadvisor, I was expecting War and Peace style epic portions of good value, no-nonsense food with little sprigs of green garnish on top. The Cawdor certainly didn’t disappoint on any of these fronts with starters which could be mains, mains which could feed a family of four and a fecundity of little green garnishes perched on top of each dish. The grand dining room of this Georgian hotel was busy by 7pm on Friday evening when we chose to dine yet a large serving team kept things moving swiftly throughout the meal.
Starter: Goats cheese, pear and walnut salad, green garnish - Well dressed salad and the rest of the ingredients speak for themselves. Very enjoyable. The croutons were a little stale. 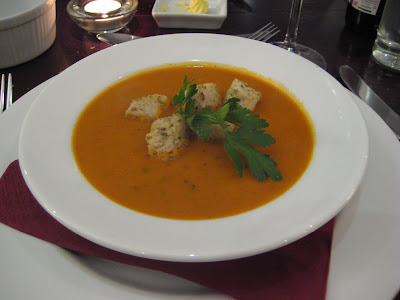 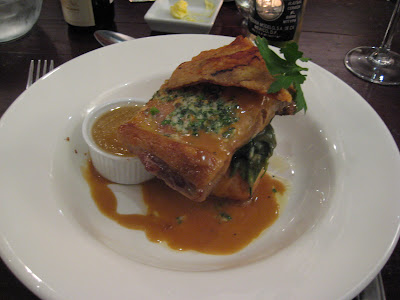 Main: Pork belly, Spinach, Dauphinoise potatoes, Cider sauce, Apple sauce and green garnish - This is perhaps the best pork belly I have ever eaten. It was tender, flavoursome and large in portion size. The crackling would also give Mr Porky a run for his money. Accompaniments were on the money as well but a smear of garlic butter on top of the pork felt a little out of place. 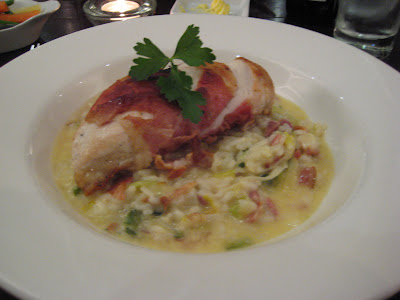 Main: Chicken wrapped in Camarthen ham, with a leek, bacon and cheese risotto, green garnish - Good according to the other half. Chicken was beautifully moist and consistency of the risotto was unclaggy. The flavour of the risotto was the slight let-down; a little over-cheesy. 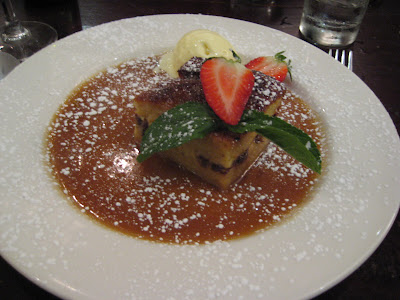 Dessert: Bread and butter pudding, toffee sauce, vanilla icecream and green and red garnish, blizzard of icing sugar  - As a result of the  epic portion sizes, Mrs G shockingly opted out of dessert. This pudding was just the type of no-nonsense hotel grub I was expecting. It tasted as it looks.
On our second night we chose to dine at Y Polyn, something of a West Walian institution having won such accolades as AA restaurant of the year for Wales 2009/10. I booked two weeks in advance for a Saturday night  (granted it was Easter Saturday) and only a table in the bar area was available (however, the difference between the bar and restaurant area seemed pretty subtle). The restaurant has a laid back, exceptionally friendly, pub feel to it and the owners (former AA inspectors) are clearly aware of the importance of making guests feel relaxed and at home. This was perhaps the most convivial dining experience I have ever experienced. Mark, one of the owners, who runs front of house is the personification of bonhomie. On arrival I was greeted by my first name, after the meal we had an brief chat about food (my only topic of conversation) in London and when a glass of wine went astray (the only blip in service throughout the whole meal) Mark substituted it for a half bottle. This was model service, the kind of which creates incredibly loyal custom.
I've just been looking at the restaurant website to jog my memory a little (not that I really need to as I can still remember meals from when I was 8 years old) and the mantra “Fat equals flavour. Live with it.”pops up on screen as the site loads. I can’t agree with this take on food more whole heartedly and the generous food which we were served, both in terms of flavour and portion, did not disappoint.  Apologies once again for my blurry photography but I had a couple lighting issues in the twilight hour. 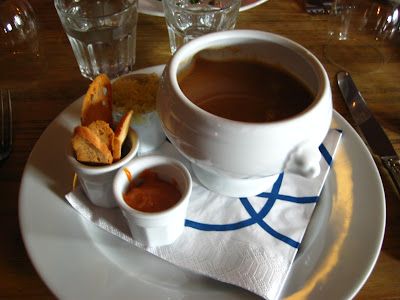 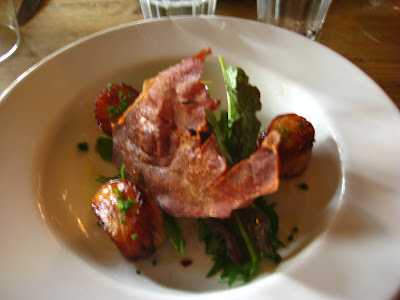 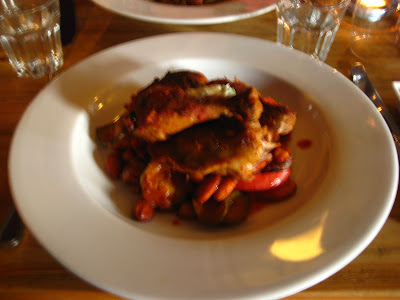 Main: Chicken Tagine - The photo really doesn't do this dish justice. Crisp skinned, melt in the mouth chicken in a sauce of red peppers, courgettes and tons of almonds. It was the bees bollocks. Huge portion to boot. 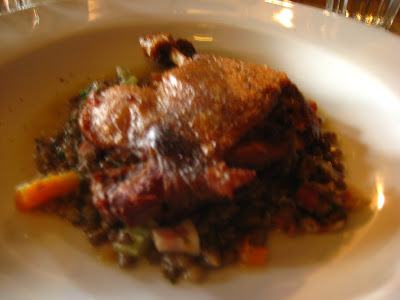 Main: Duck Confit, Braised puy lentils. - Once again, crisp skin and tender meat. Mrs G was a little underwhelmed by the flavour of the lentils. They had more of a subtle stock thing going on rather than a whack over the head. 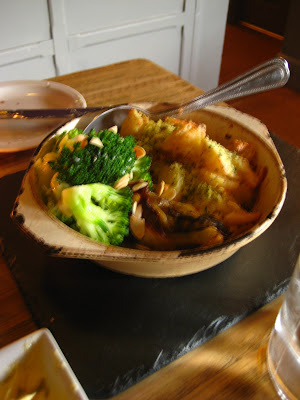 Accompanying veg - Worth writing about on their own. Included in the cost of the meal (£30 for 3 courses) comes a bottle of water and accompanying veg to go with the main dish. Brocolli with almonds, fennel and potato gratin were all cooked to perfection. 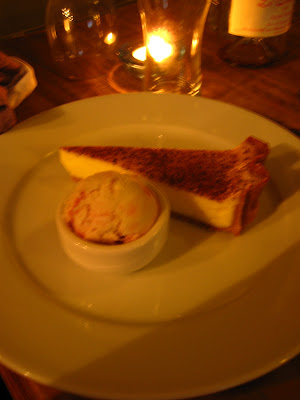 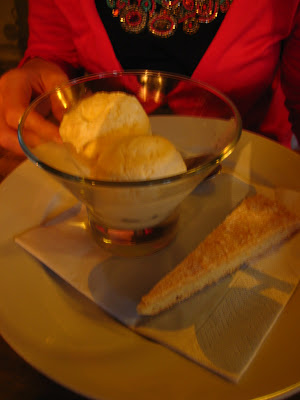 Dessert: Stem ginger icecream and shortbread - As you've gathered myself and the Mrs aren't afraid to make ludicrously bold claims of "that's the best.....I've ever eaten". After one mouthful of her dessert Mrs G concluded that this was the best icecream she'd ever eaten. Silky smooth icecream with just the right amount of stem ginger.
All in all a wowser of a meal. If Y Polyn was located in Cardiff I would without doubt be a local. Simple yet flavoursome food, a relaxed setting and service that makes you smile.
The Details:
Fronlas, 7 Thomas Street, Llandeilo, Carmarthenshire, SA19 6LB, http://www.fronlas.com
The Cawdor, Rhosmaen Street, Llandeiolo, Carmarthenshire, SA19 6EN, http://www.thecawdor.com
Y Polyn, Capel Dewi, Carmarthenshire, SA32 7LH, http://www.ypolynrestaurant.co.uk
Posted by gourmetgorro at 11:57