The second stop on our tour of west Wales was the little village of Newport, Pembrokeshire which provided a base for trips to the cathedral city/village of St Davids and the picturesque village of Solva (maximum views from the top of a hill for minimum walking effort).  Newport is the home of Llys Meddyg, a restaurant with rooms located in a Georgian coaching house. There’s very much a family feel about the place which made us feel relaxed throughout our stay. The chef, Ed Sykes, runs the kitchen whilst his wife, Lou Sykes, runs the front of house. Ed’s mum also helps out around the place and we had a good chat with her. She told us that her other son runs the successful Snail’s deli in Cardiff. I’d say she must be pretty proud of her sons’ achievements.
After the opulence of The Grove at Narberth, Llys Meddyg had a lot to live up to and in most places it succeeded. We were staying in The Red Loft room which had a contemporary seaside feel to it (red and white striped fabric and white painted wood) but with luxurious elements (double-ended bath, Egyptian cotton fabrics and flat-screen TV with sofa).  Pre-dinner drinks were served in the basement bar where we were also served a pre-starter and made our selections from the menu. We then moved upstairs for the meal proper. In a similar vein to The Grove, the restaurant prides itself on its use of local ingredients but there is more of a simple, bistro feel to the way they are served. We ate some excellent dishes but the meal wasn’t without its flaws - a couple of issues with taste, portion size and there does seem to be a bit of an obsession in the kitchen with Kilner jars and boards. Service was friendly and well paced except for a glass of port which went missing for about twenty minutes (profuse apologies were made).Onto the blow by blow account of each dish - apologies for the deteriorating quality of the photos but I had lighting issues.
Pre-starter: Pea Soup - Fresh and light but a little lacking in the flavour department. 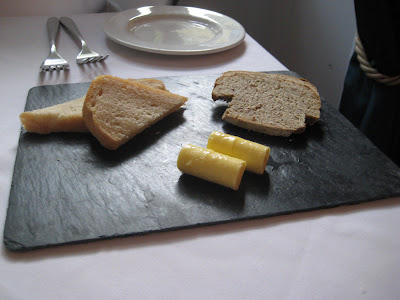 Bread: no issues, board number 1 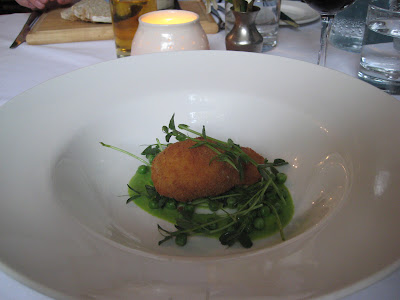 Starter: Bread crumbed soft poached duck egg, pea puree - Crisp crumb without a hint of grease, perfectly poached egg. However we felt the dish was a little too simple flavourwise (I think I just wish there was a layer of meat so that it became a scotch egg). 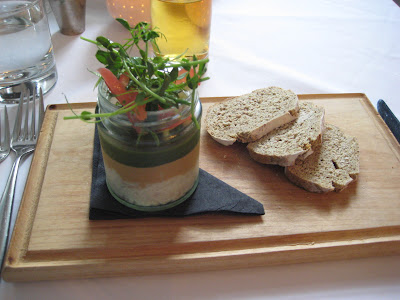 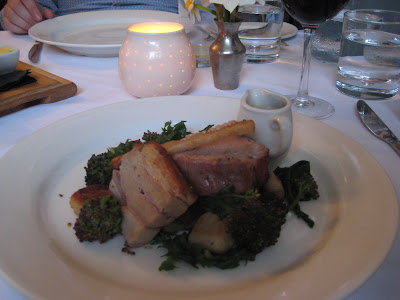 Main: Well aged Hereford beef sirloin, triple cooked wedges, bearnaise, red wine jus, third board - Overall very enjoyable but I think the sum of this dish was greater than its parts; the wedges were delicious but the crisp coating to fluffy interior ratio was a little out of balance and there were about 2 jacket potatoes worth of them on the board, the steak was tender but lacking flavourwise and I'm not sure the jus was necessary as well as the bearnaise. 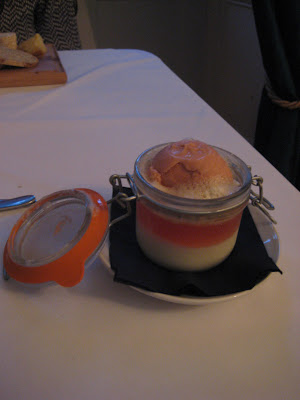 Dessert: Rhubarb jelly, buttermilk pannacotta, rhubarb sorbet, kilner jar number 2 - This was fab. Sharp rhubarby jelly magnified by the rhubarby icecream and a creamy pannacotta. After my carb marathon of a maincourse this was just what I needed to revive my tastebuds. However, there were a couple of unnecessary pieces of crisp meringue lurking beneath the icecream. 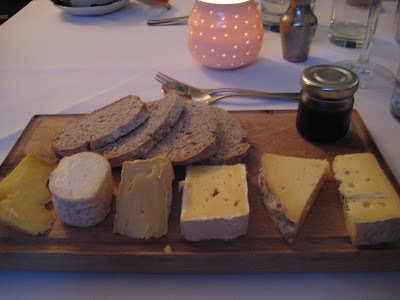 Dessert: Welsh cheese selection, quince and crab apple jelly, soda bread, fourth board - A fine selection of cheeses and some delicious jelly but a bit of description about what was on offer on the board (either verbally or in paper format) wouldn't have gone a miss.
All in all a really fine meal, fantastic accomodation and the warmest of welcomes . It wasn't without its minor flaws but this didn't detract from our overall enjoyment
The details:
Llys Meddyg
East Street
Newport
Pembrokeshire
01239 820008